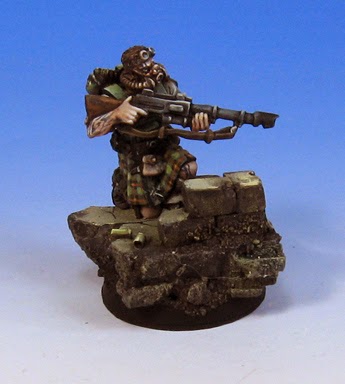 A few items here.  First, another wonderful mini from Victoria, part of the Highland Moss Guard series.  The kneeling versions offer so much flexibility.  They can be used for weapons teams, or for fun poses such as this, interacting with the base.

In addition, there are some shell casings from Secret Weapon miniatures on the base (which was made from backed sculpey, by the way!).

The shell casings add a wonderful extra detail.  Just a few here and there enhance the theme greatly.

I am working on the last tartan pattern now... pics of that either late tonight or tomorrow! 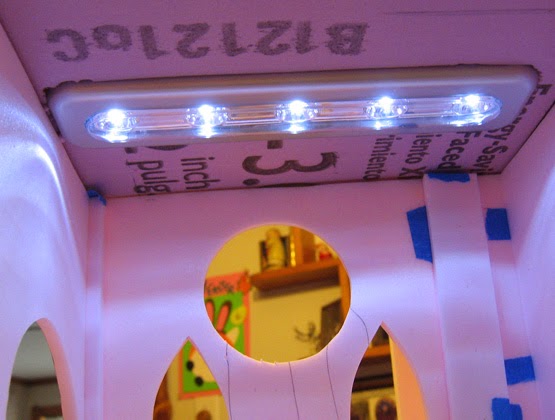 With the lower walls complete, and the interior ready as well, it was time to complete the highest level.

Many functions are expected from this level.  It will provide the majority of the light on the inside of the board... from outside and within.  Any false moves here, and I might cancel out one or both of those light sources!! 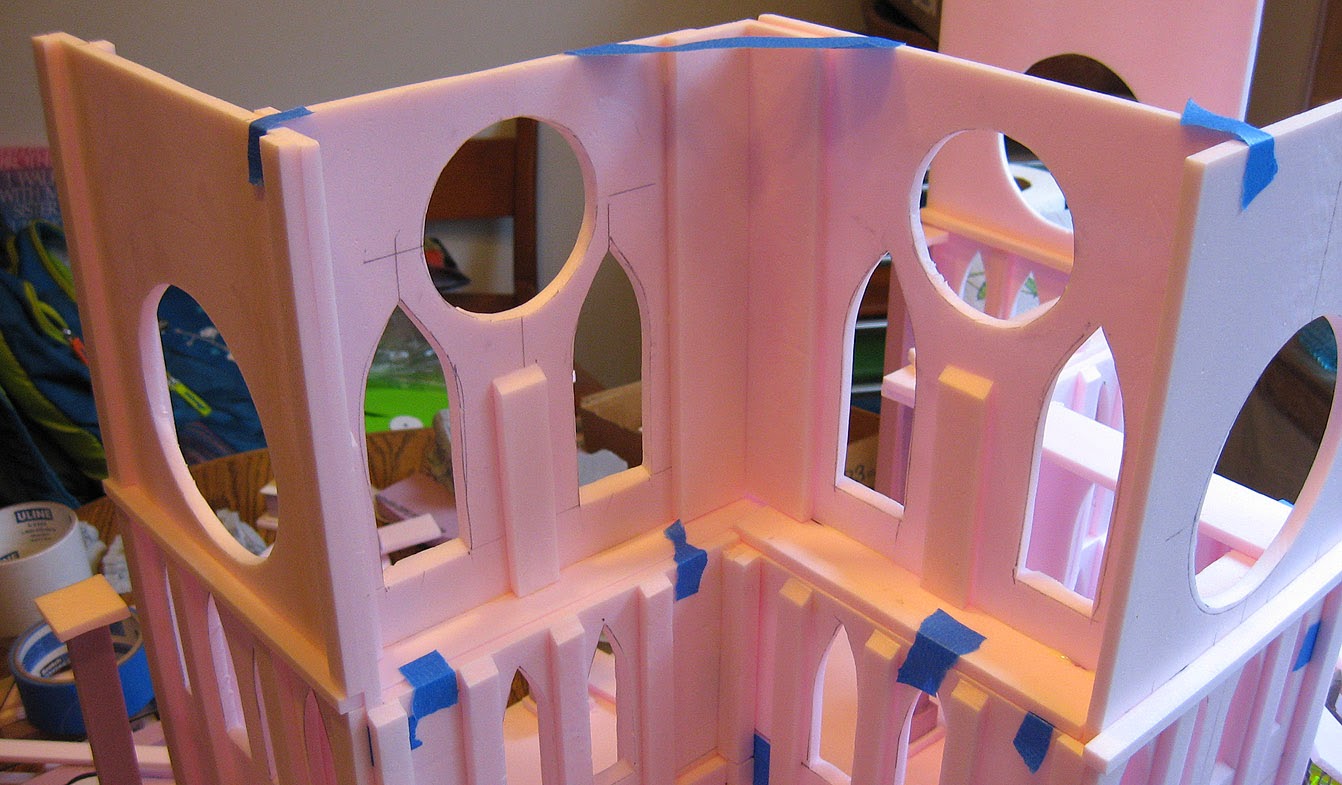 I worked my way around the top level.  Mostly at a disadvantage, since I could only glue so many of the pieces together.  Some painter's tape is all that is holding these semi-assembled sections together for now. 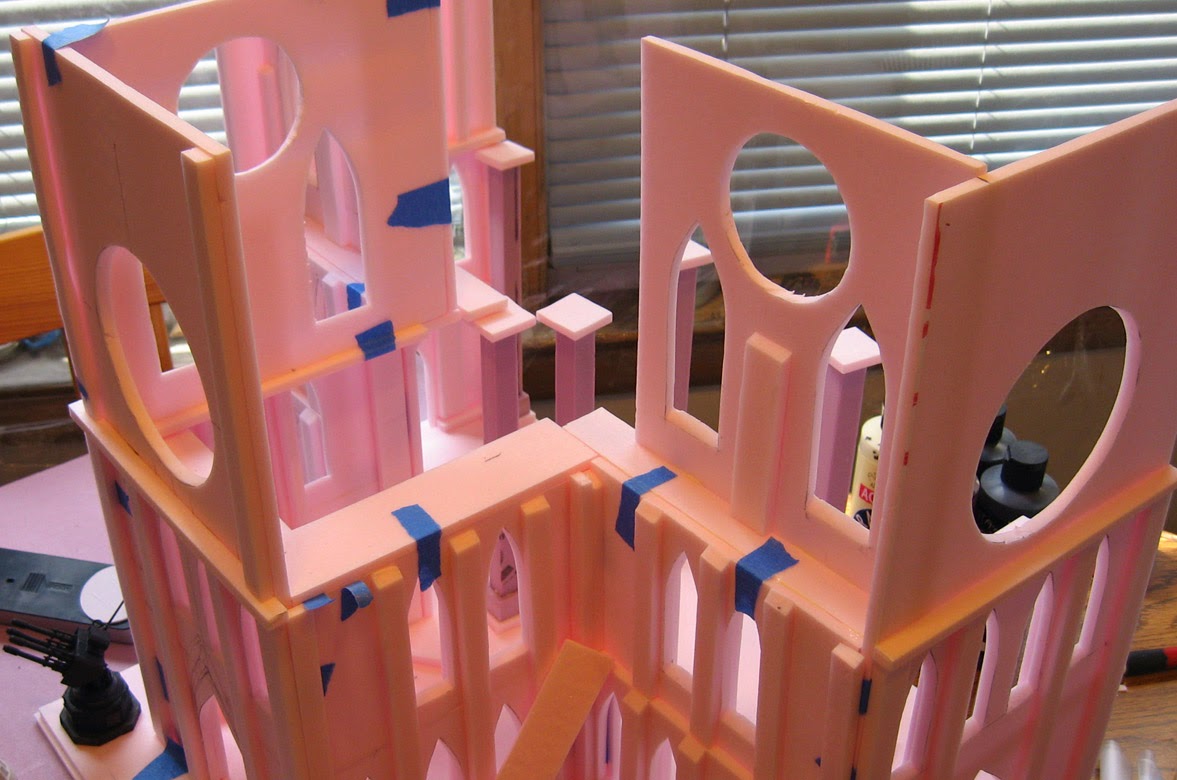 At last!  Upper level in place. 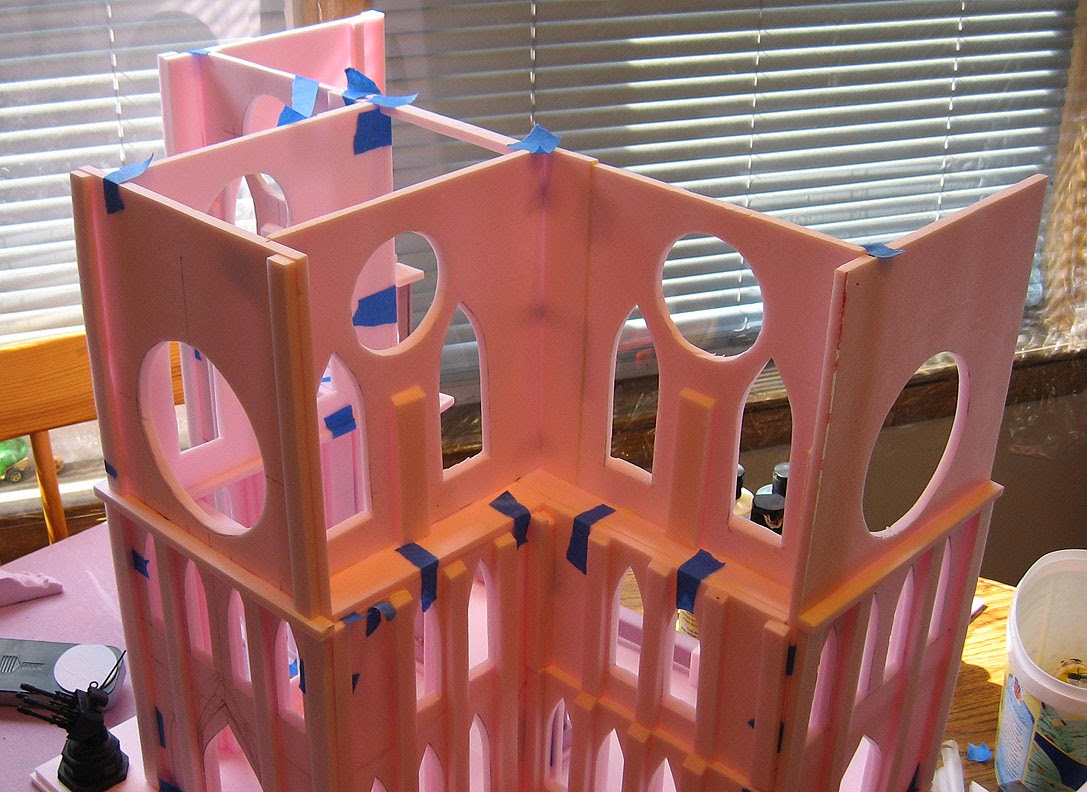 Interior bracing.  Just like the lower levels, the idea is to increase the thickness of the walls with those decorative pieces.  Ideally, tripling or even quadrupling the width in places, while still allowing as much light as possible into the structure. 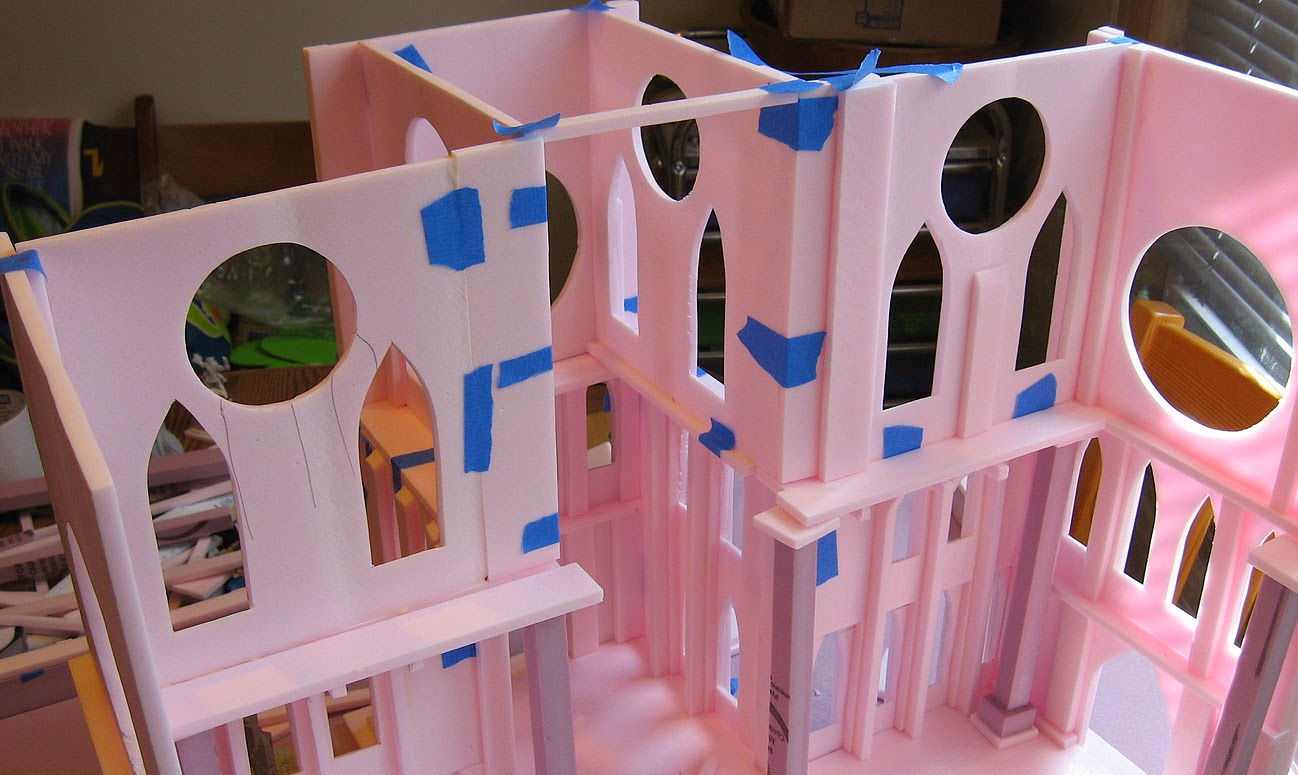 More bracing on the exterior. 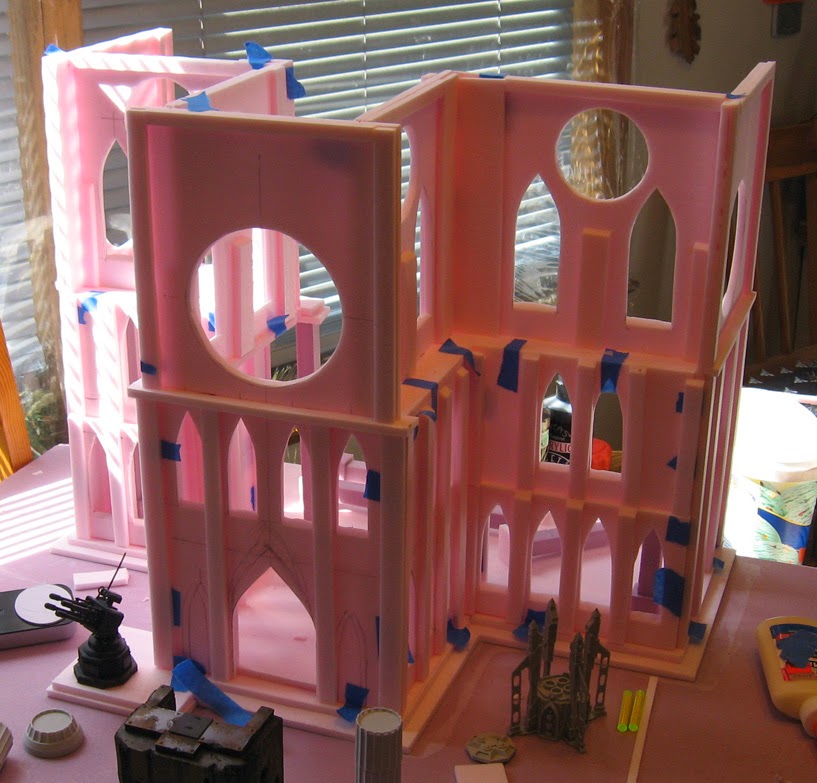 All the struts and buttresses in place.

At this stage, I would have to transverse the central knave with arches.  These would have to reach all the way down to the columns, but no block too much of the light/views of the interior.

This would be complicated by the size of the LED lights that I was using.  You will see why later. 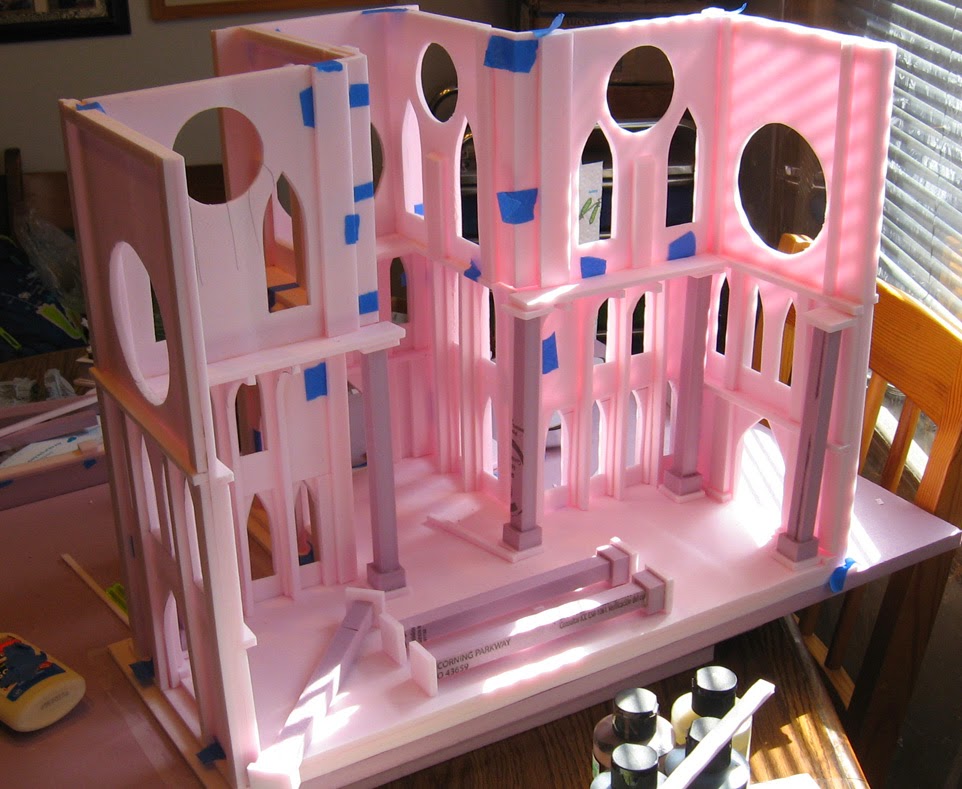 Here are the first raw cut sections of those arches.  There will be lots of details and secondary arches added to these which will make them more interesting and much stronger. 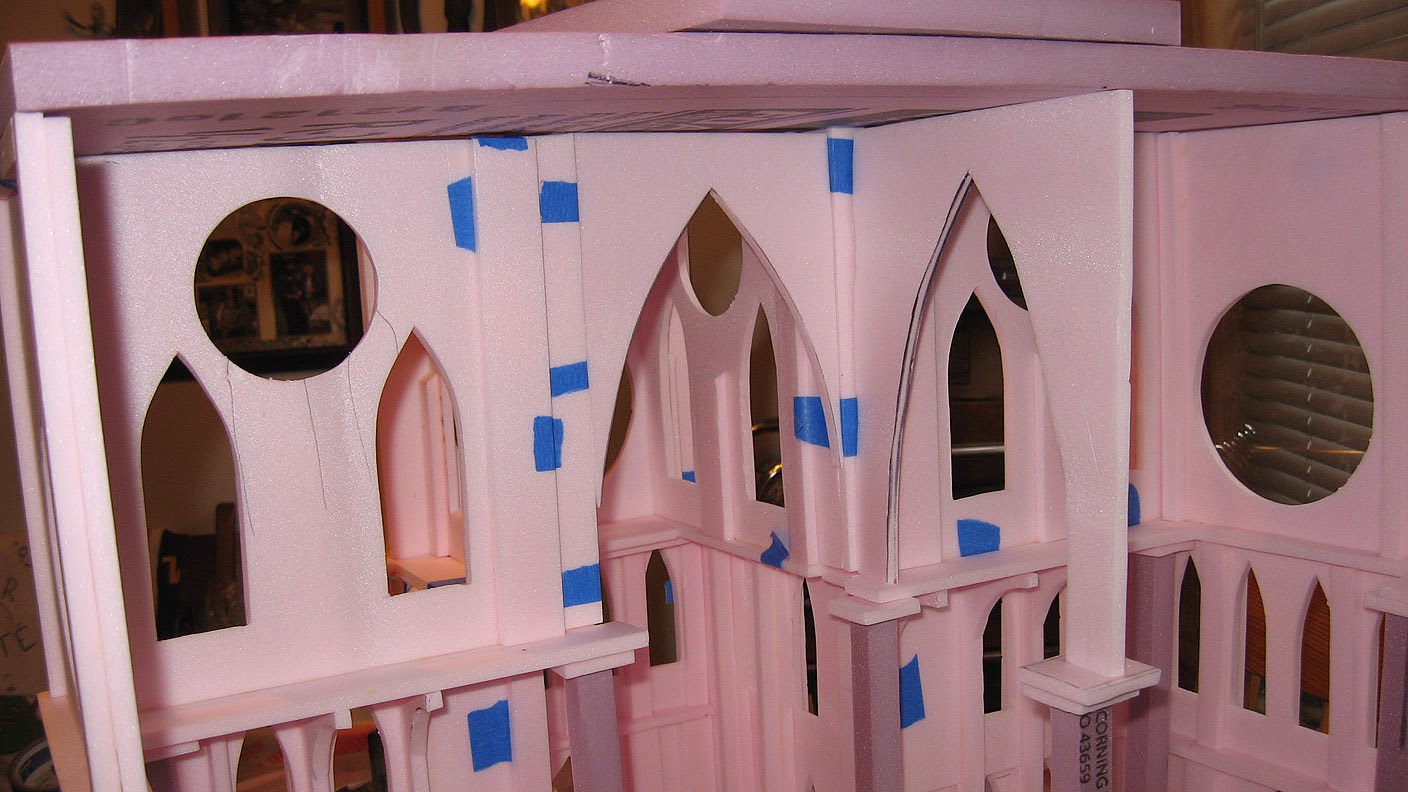 Here is a hint at what they would have to support.  Keep in mind that the roof is, in it's own way, going to act like a cantilevered bridge.  The structure of the roof itself is designed to be self supporting... or as much as possible :-) 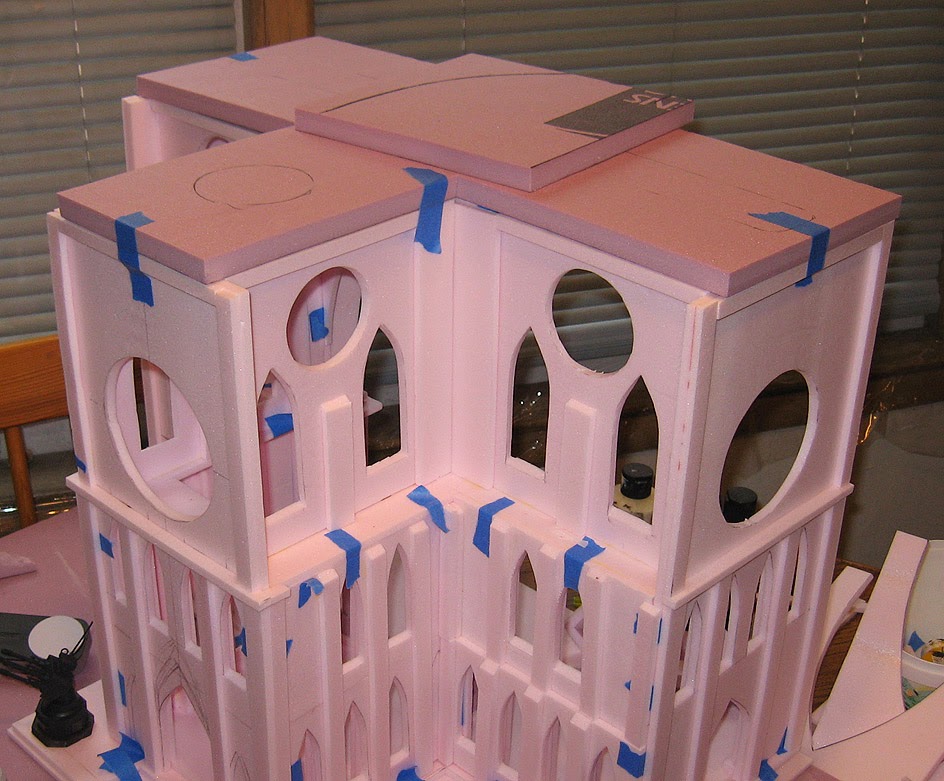 I wish I could have glued these in place, but they will be one of the last things added.  I will have to add much of the details to them separately... making it more of a challenge. 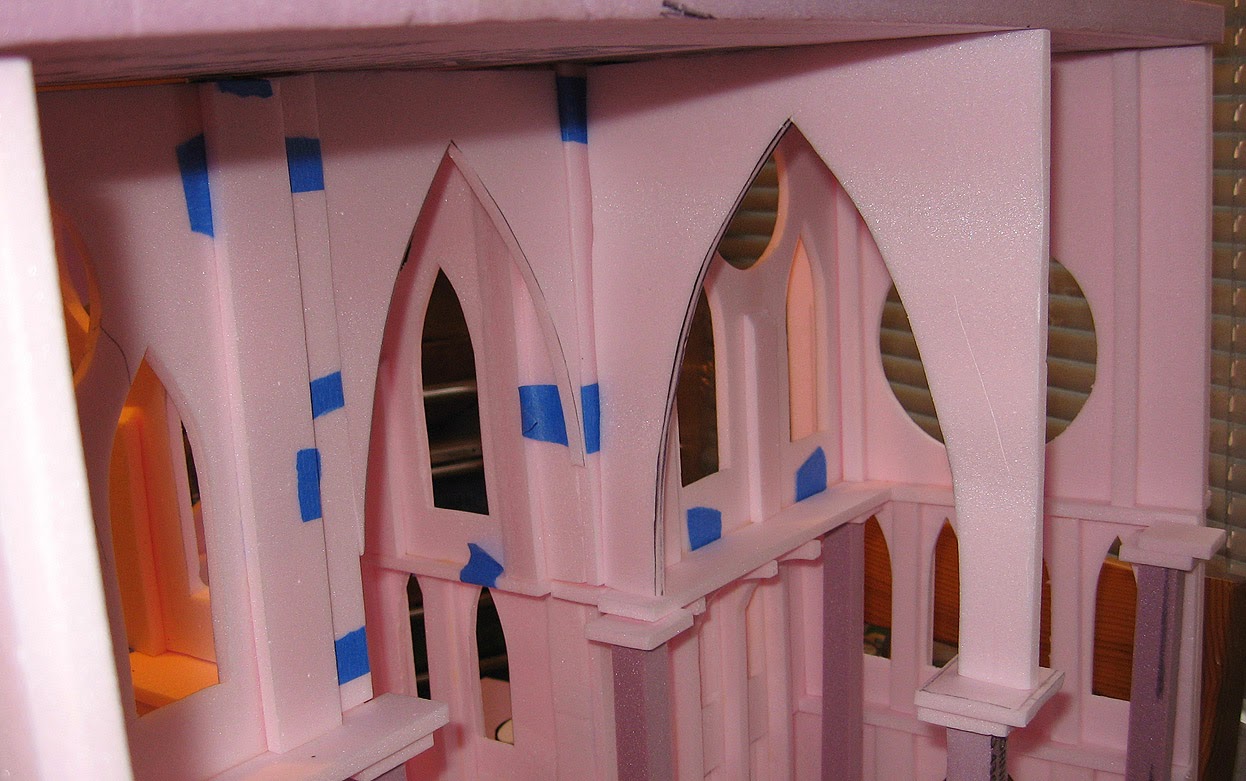 The three basic pieces are done.  There will be lateral arches which sprout from them, and bracing will be supplied in that same sneaky method of 'details'. 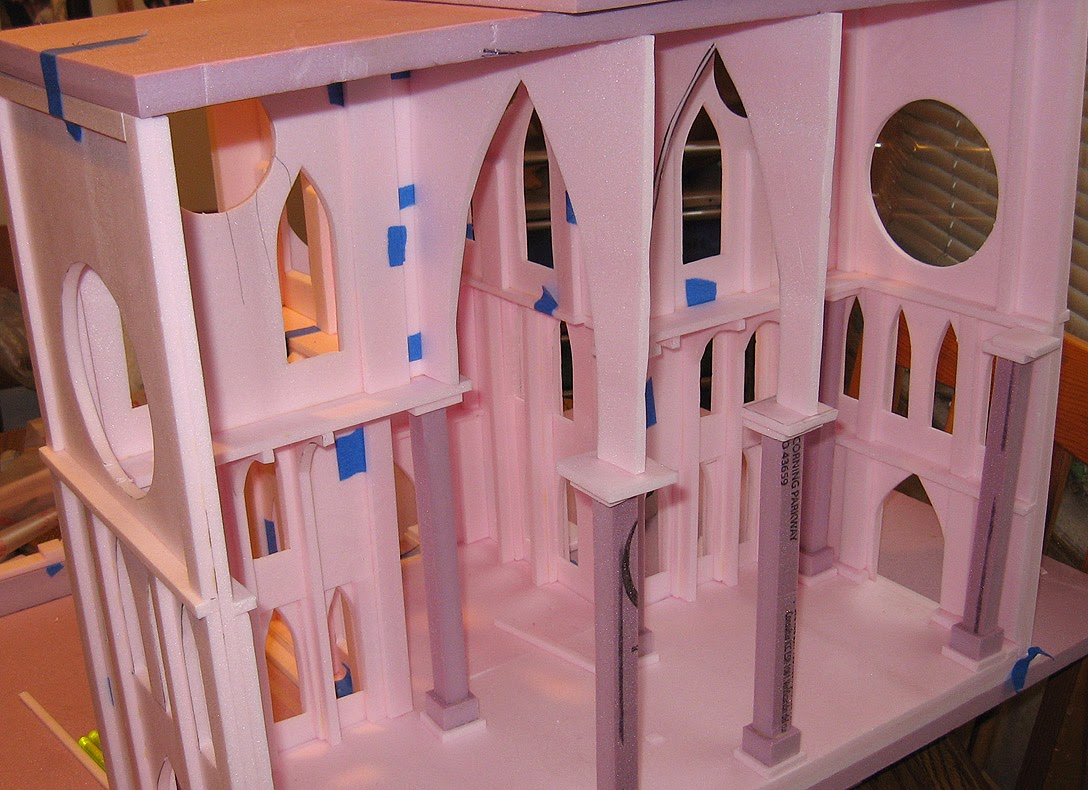 Here is a shot with just one bank of lights turned on.  You can see how dramatic the effect is against the backdrop of the very warm kitchen lights. 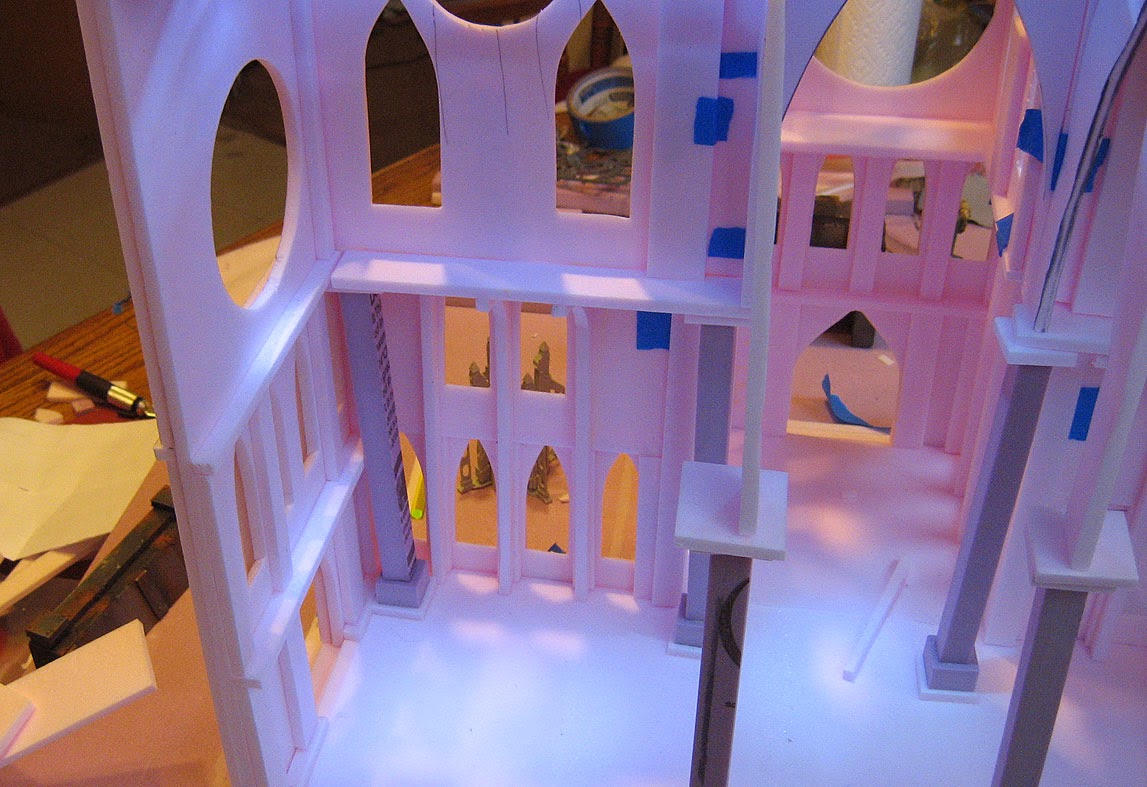 The source!  I found these at the Home Depot last week.  There is a second bank like this on the other side of the knave.  You can see how I didn't have as much room as I was expecting (a fraction of an inch, but is was a key fraction!) 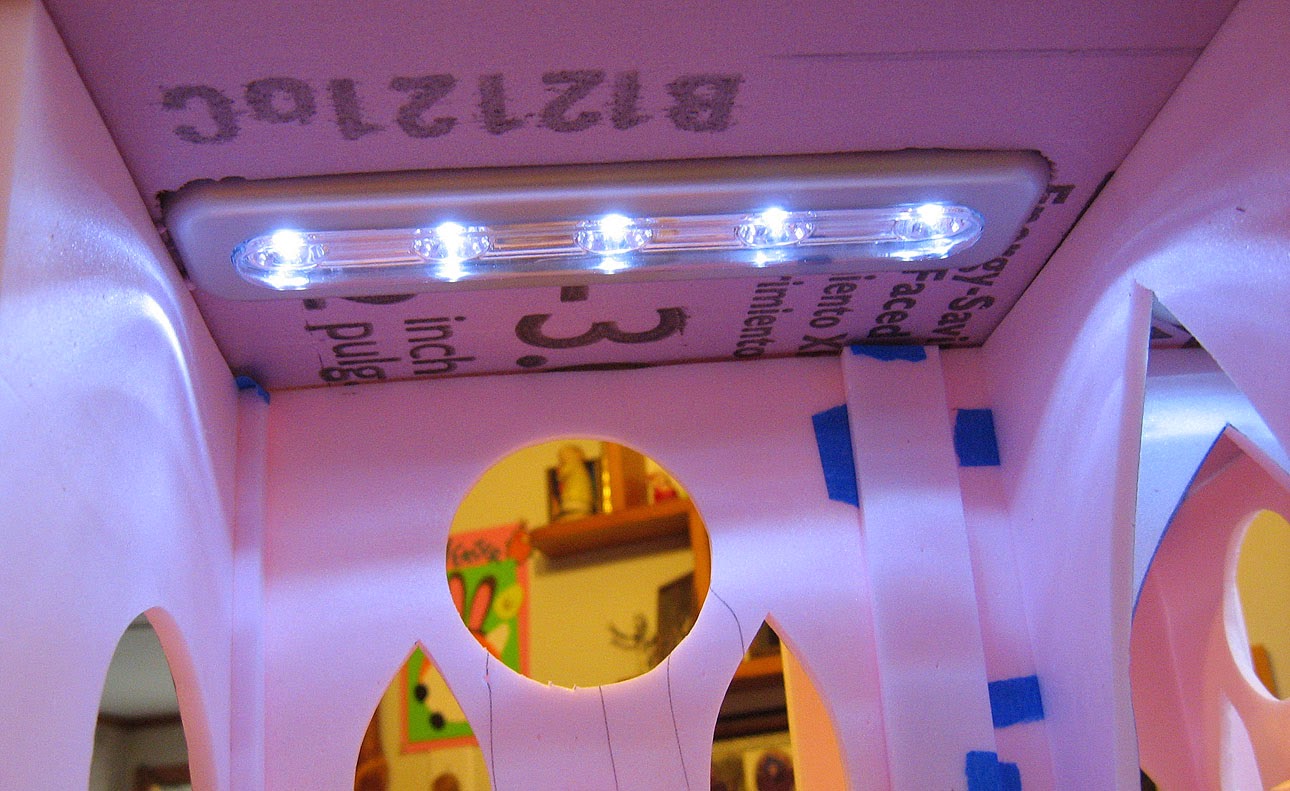 All in all, there are four sets of LED lights going into the ceiling.  I think it will provide the most light of any of my previous structures, which actually had more lights!

I am truly hoping that people will be able to see the stained glass effect.

Next up, building up the roof section.  Stay tuned!!!! 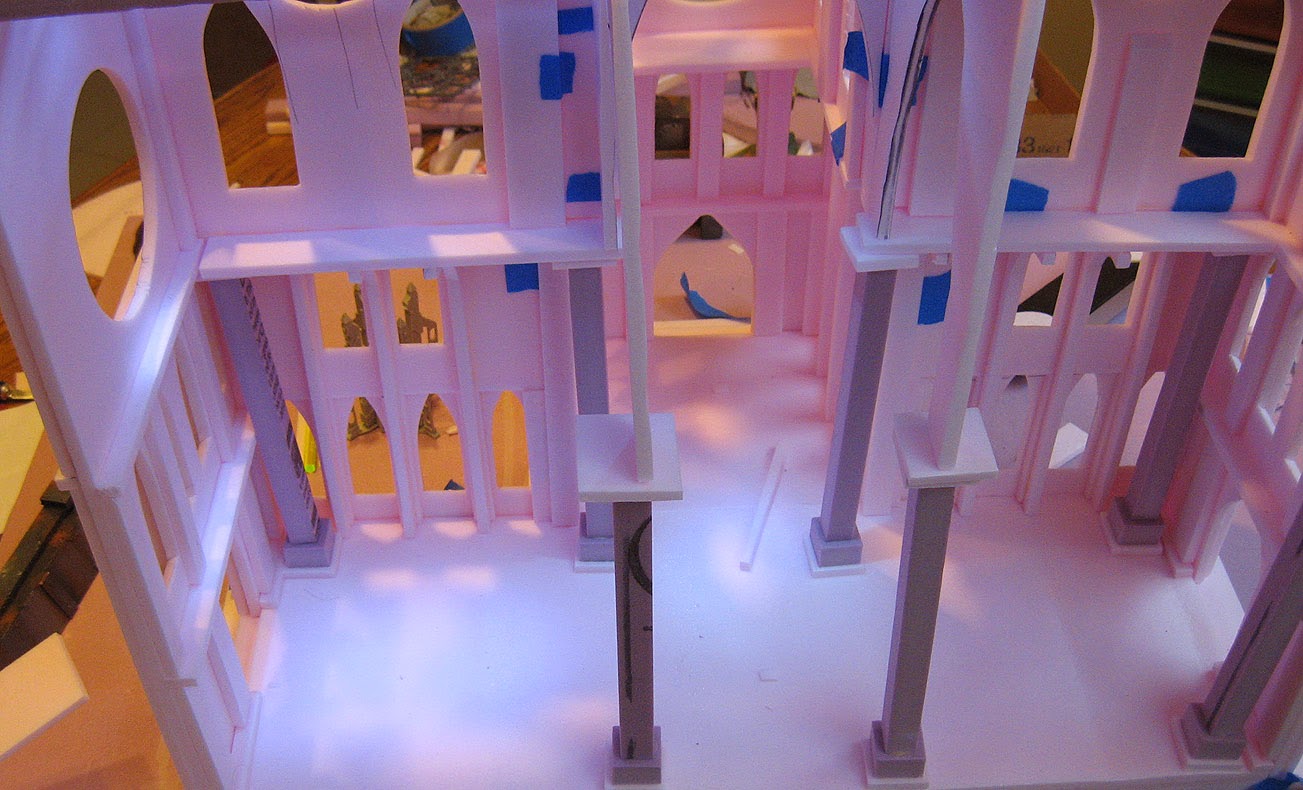 Posted by wappellious at 1:59 AM 6 comments: