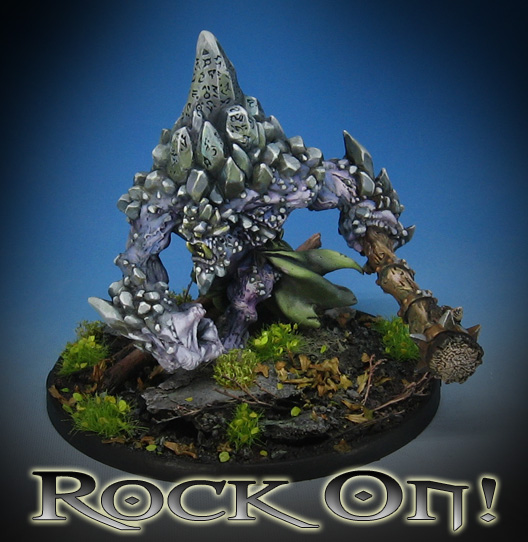 I have seen these Privateer Press Trolls for quite a while now... this is the first time that I have seen one of these rock toting monsters in person.  This is certainly a lot easier to paint with the Shaded Basecoat and glazing techniques.

This allowed me to get the muted greenish tinge on the rocks while creating opposing purple and blueish tones on the skin.  with so many things going on all over the place, and so many shapes, it is important to have all of those 'relate' to each other as well as possible.

The Shaded Basecoat works in a similar way to regular 2D painting, in that you cover all of the surfaces as quickly as possible, which means that you are also mixing your paint on the figure along the way.  When you do this, you end up with very interesting blends and transitions almost by default.

The basing was done in the usual bark and branch method... I think that I have a video of the making of this base, and several others:

Something that is entirely metal and this large can really be a challenge.  I learned that using the same rubber gloves that I use when painting vehicles was helpful in not messing up painted areas as I handled it.  Keeping the oils from my fingers away from it really helped!

One of the aspects of glazing that I tried to emphasize at Reapercon was the concept that a glaze could also be a "lighter" glaze.  That is, taking a traditional glazing color such as a sepia, and mixing a lighter opaque color with it.  This tends to create a semi-translucent middle tone, which is what I used in many areas of the skin and especially the rocks.

This was a semi-translucent mix of green that worked so well on those stones...

Posted by wappellious at 10:20 AM No comments: