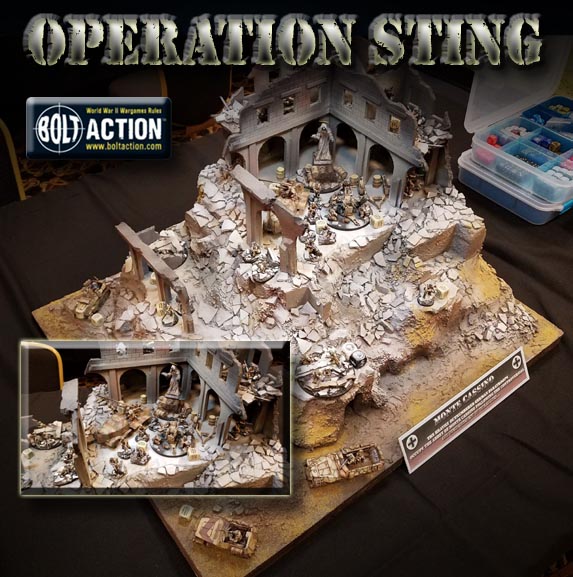 Earlier this month, I had a chance to participate in my first full fledged Bolt Action tournament, good old Operation Sting! Brent and Seamus worked so hard to make the event happen, as did many of the other participants.

We, like many others, brought terrain tables.  That made for some very nice looking tables, and a great variety.  I think that was my favorite part, having many different themes to play on! 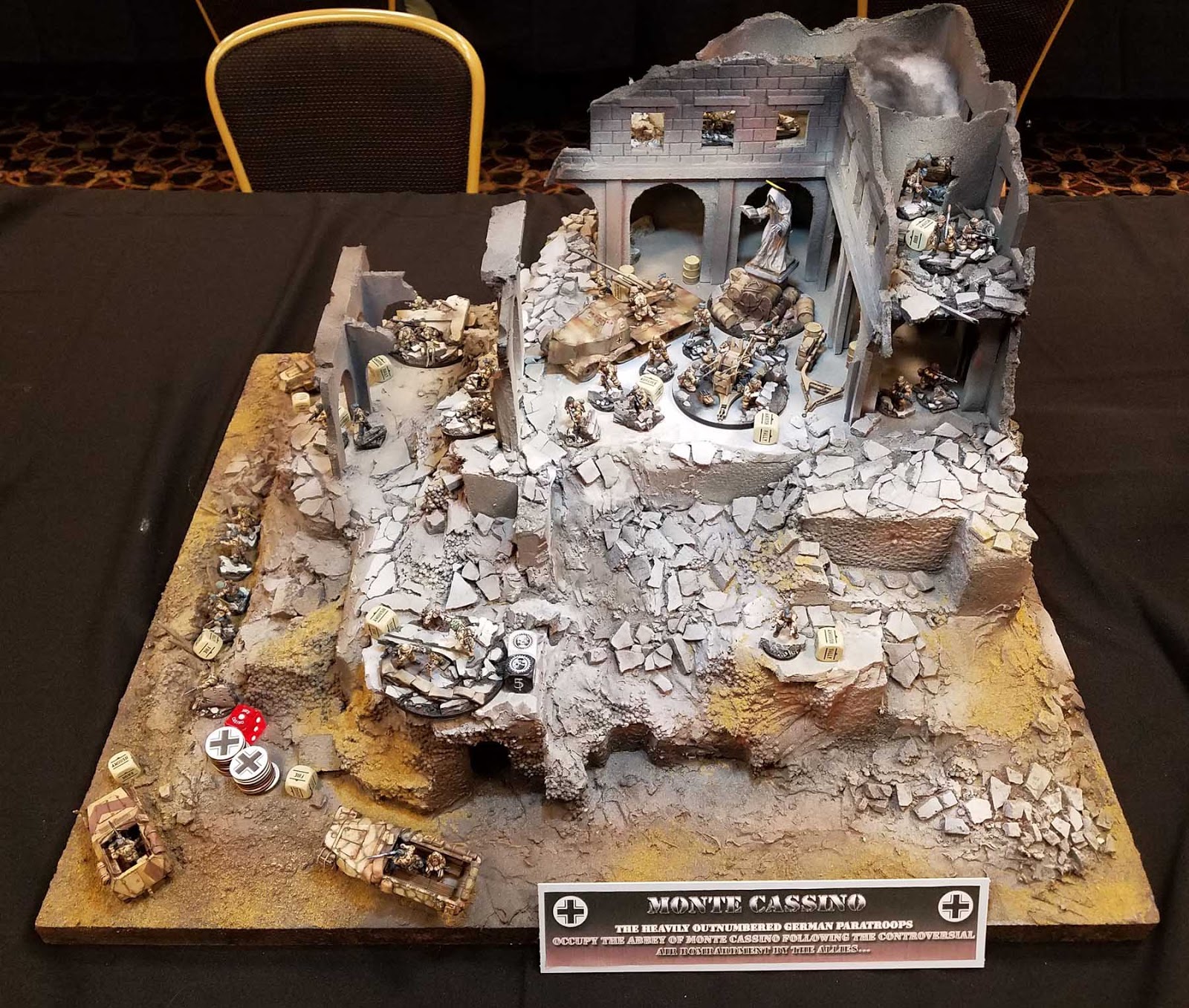 As you know, I brought the Fallschirmjager army for Monte Cassino.  We had to make an objective marker, and you can see mine in the courtyard.  This was sculpted from scratch to match the Madonna statue which stood there. 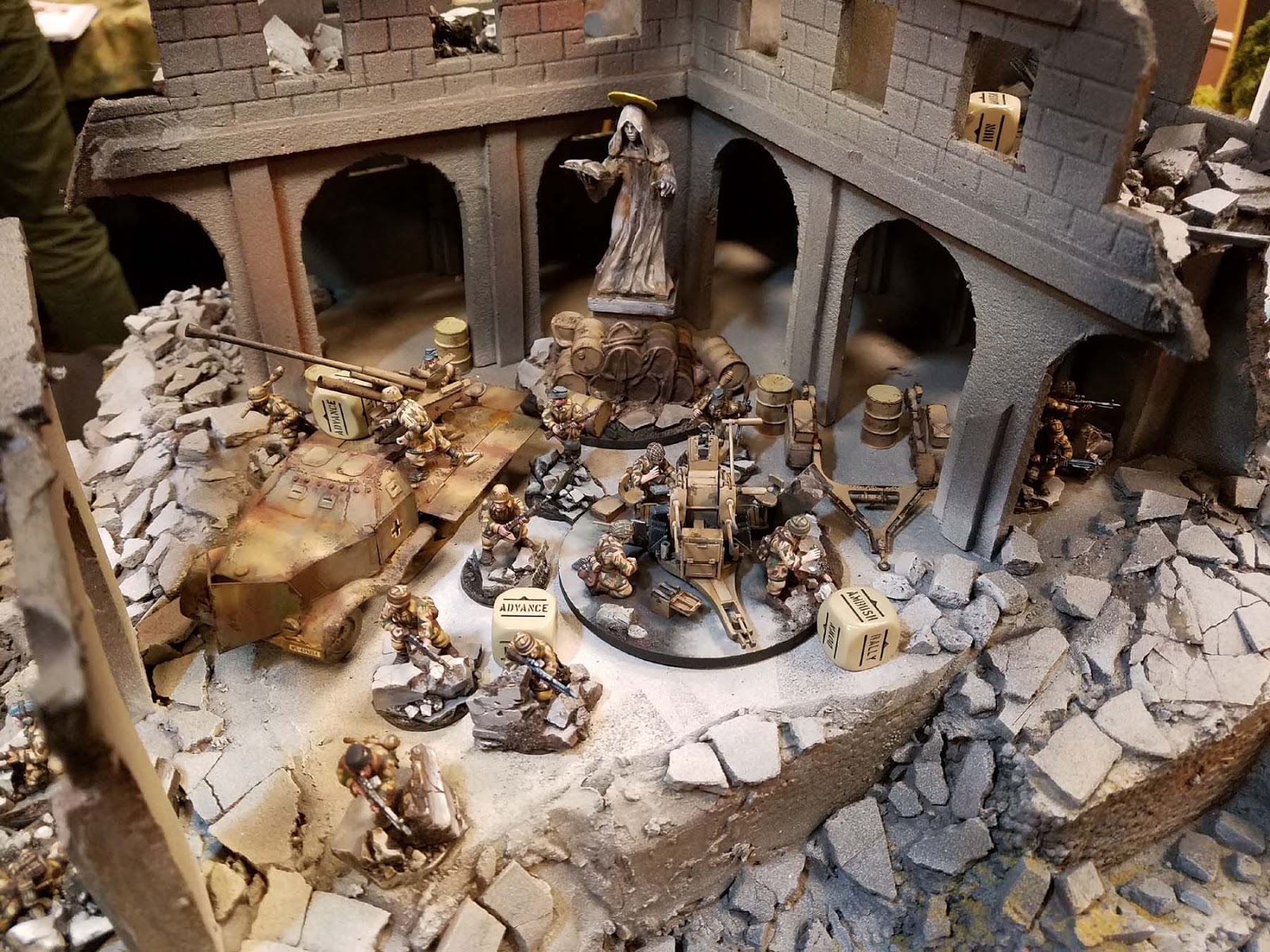 That gave me just enough room to place some of the other units, including the weapon teams. 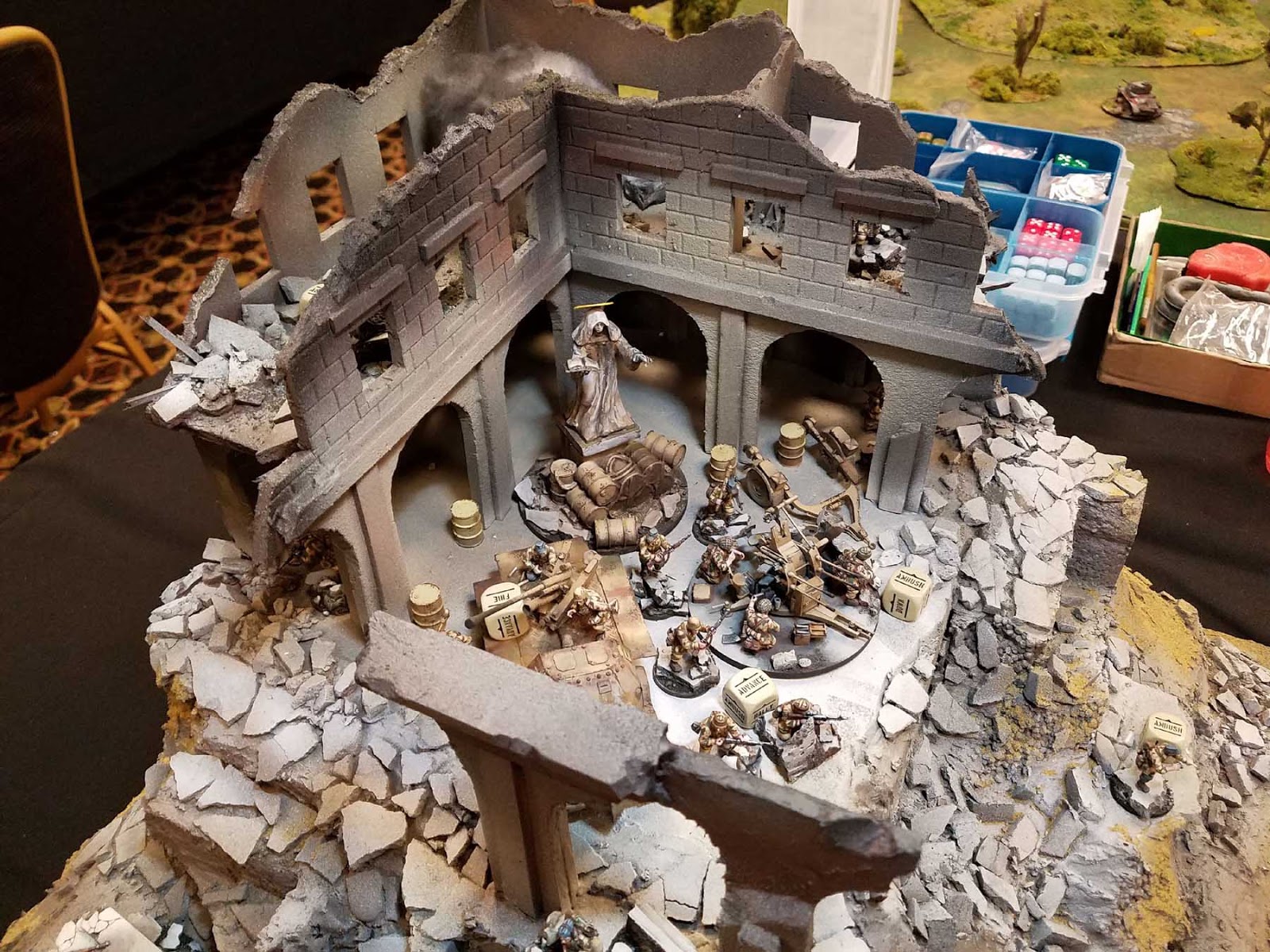 I was very happy at how the upper level of the broken monastery worked out, and I could easily place all the figures inside.  Better yet, it will be a fantastic terrain piece when it comes to playing games in this theatre. 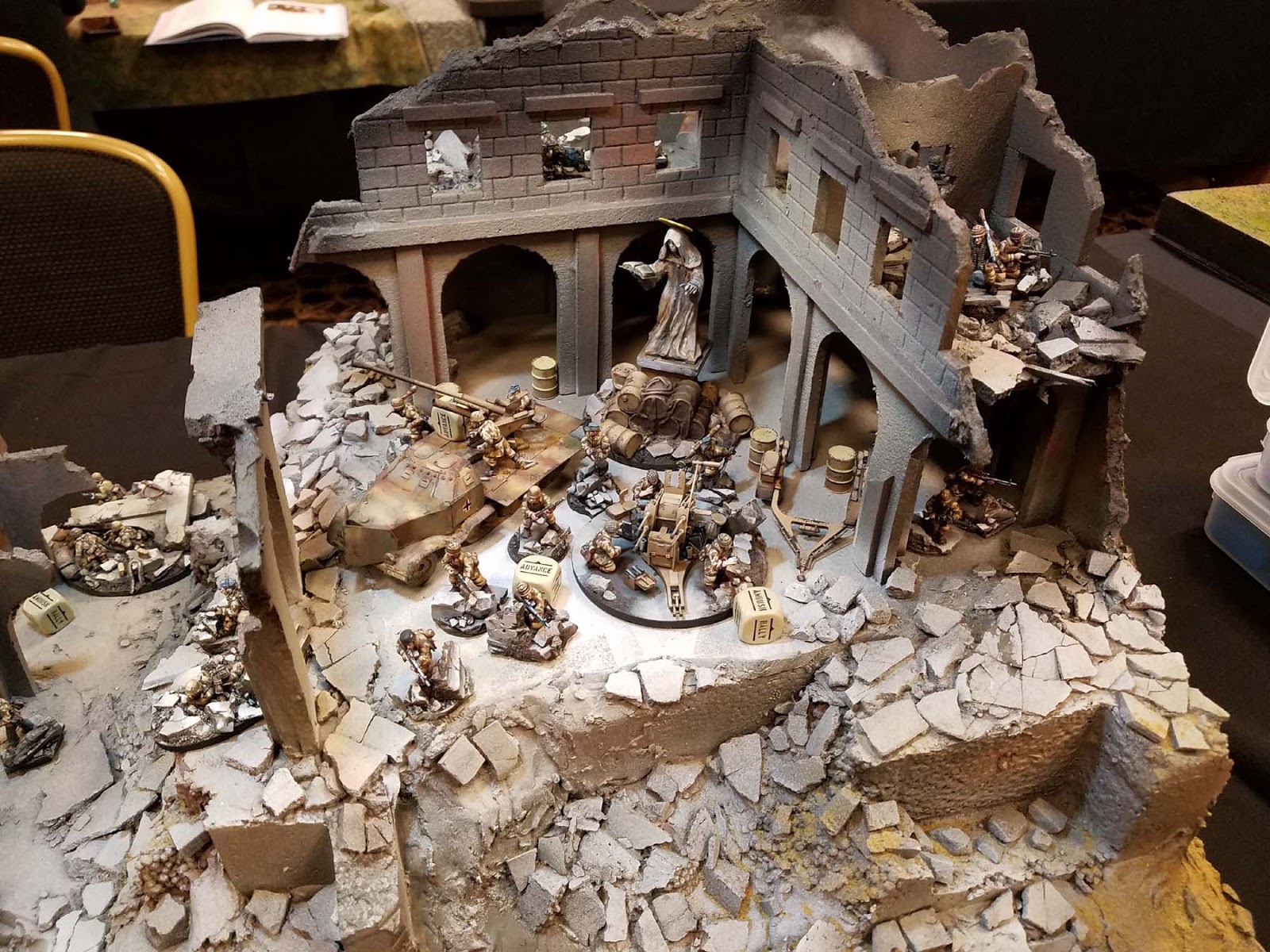 I tried to make distinct areas to place my various units for a few reasons.  First was appearance of course, but also to help me figure out which squad was which!  I had no time whatsoever to practice or play test with this army in advance.

In effect, I was being handed a brand new army on the spot, and I was going to have to learn this army in the crucible of a 5 game tournament!

Each unit had its own designated spot, and I knew which one it was by that location. 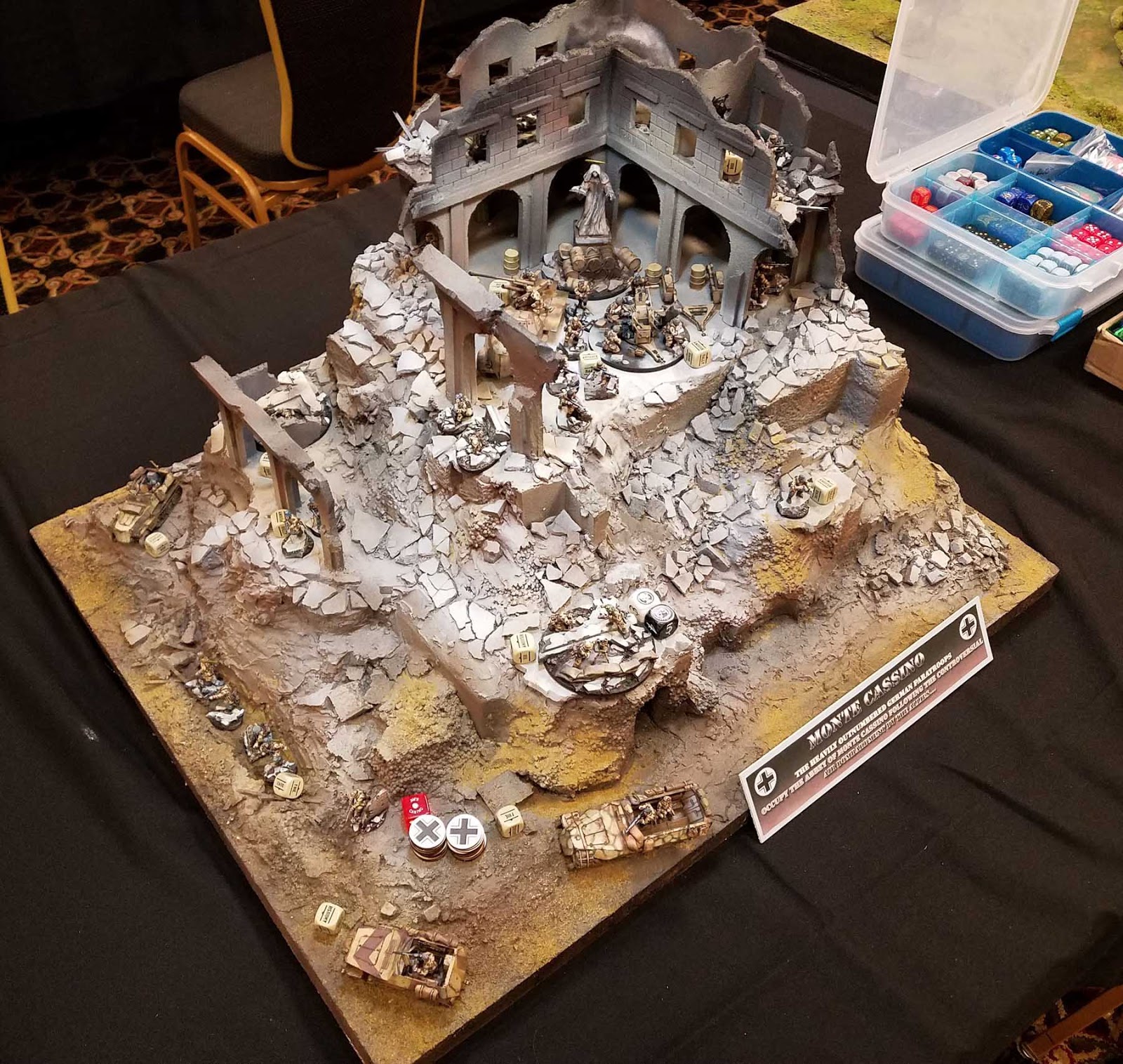 I like this view, because so many of my reference pictures were taken from this angle.  Since I had a bit more room (and light!) for photos at the tournament, I thought I could get you some fun new views of the board that were not possible as it was being constructed. 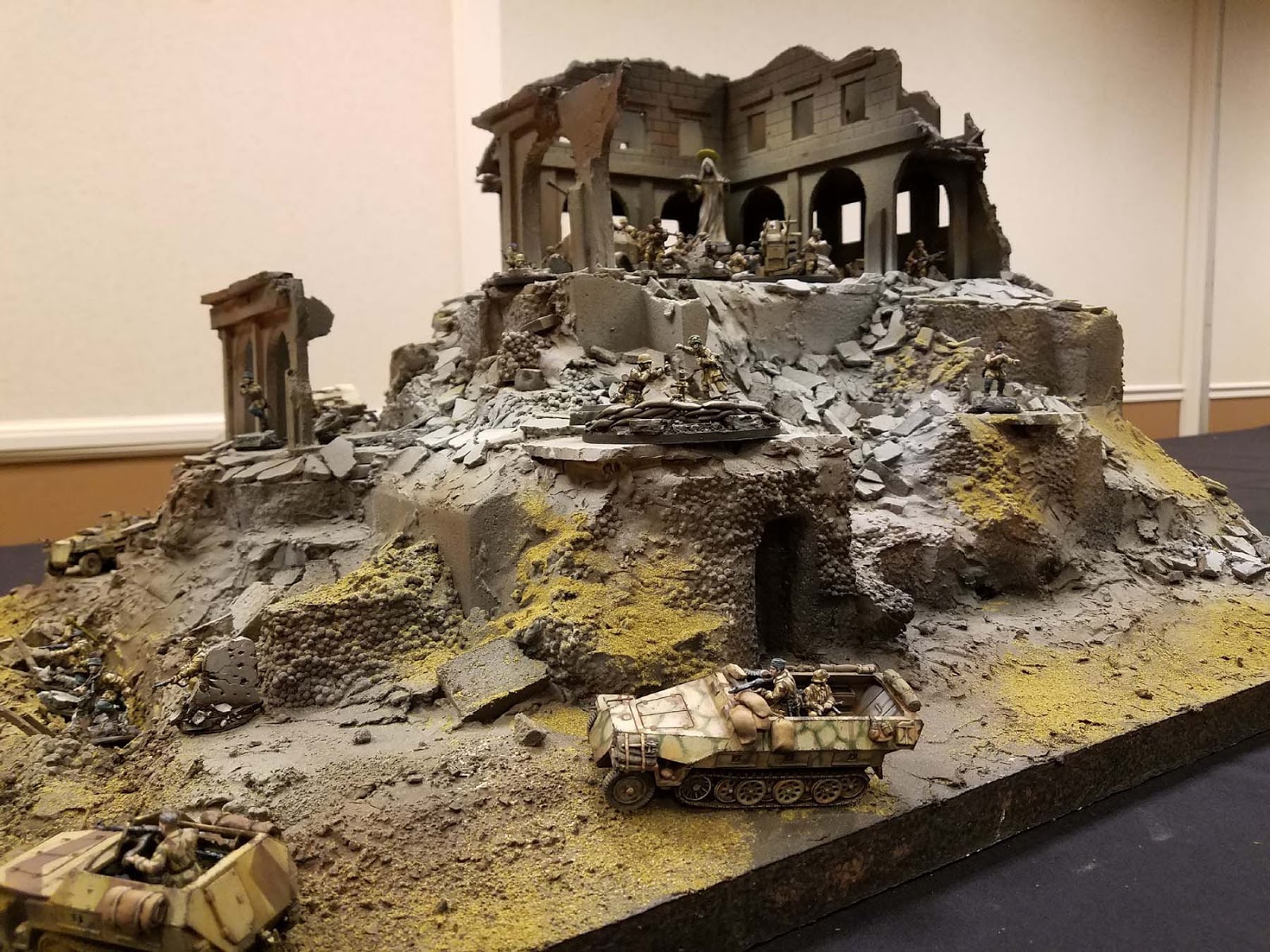 When I placed order dice on the board Friday night before the tournament, I was not entirely certain that I would have a painted unit to match it! 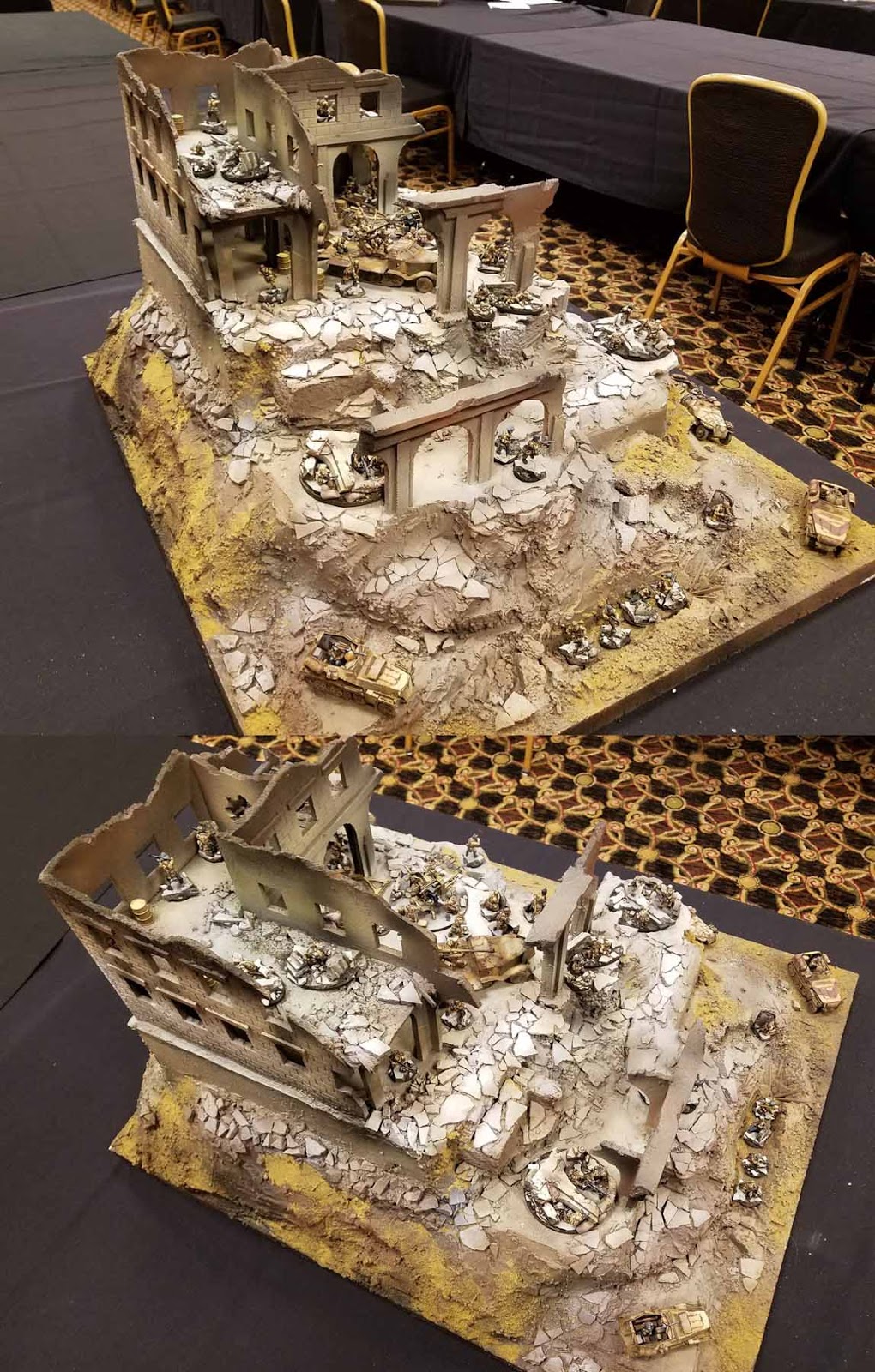 If you have not seen the making of the display board, that is detailed in a number of step by step tutorial posts: 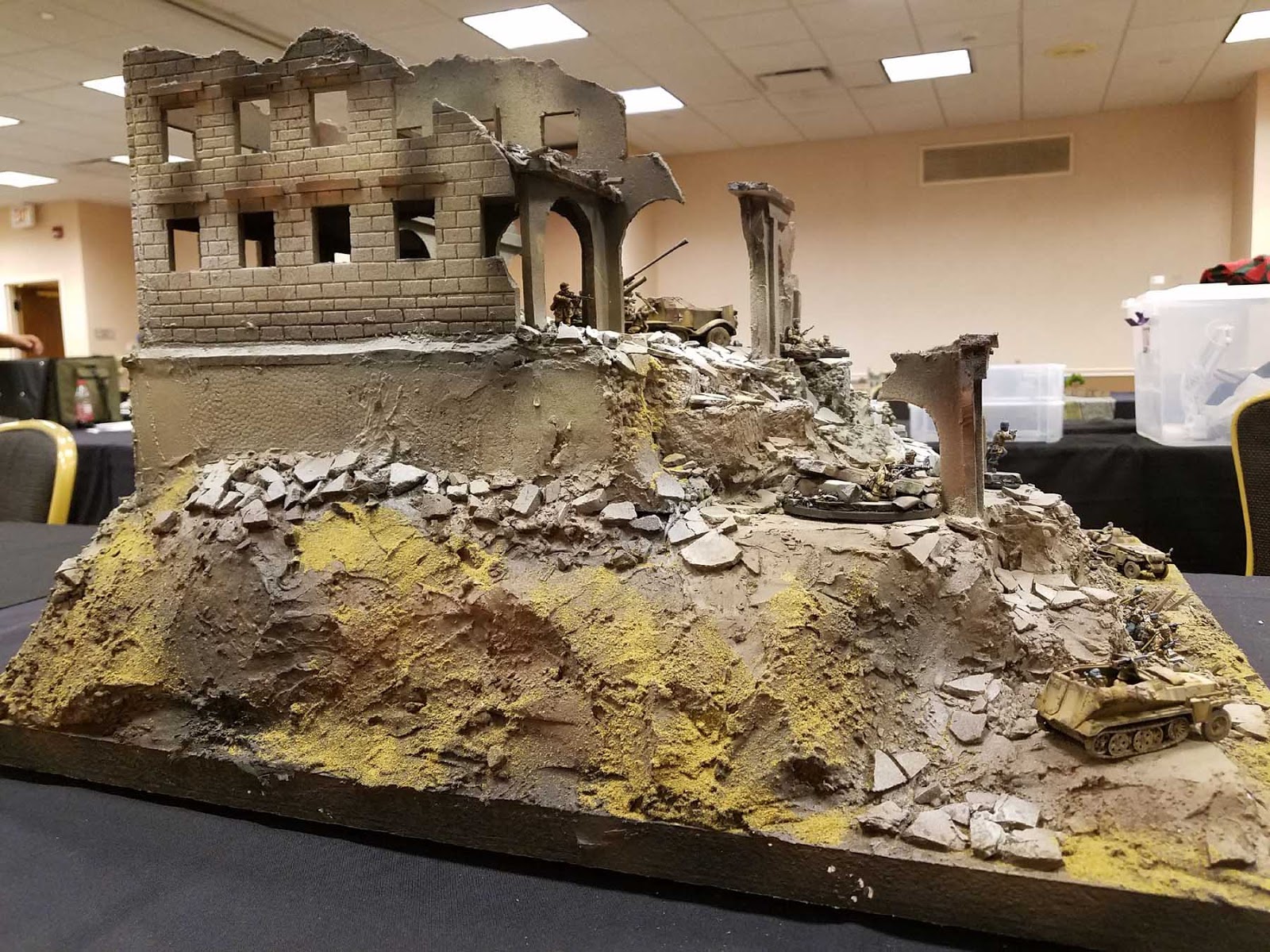 I was very glad that I utilized the openings that were in the original pieces of scrap foam... making them arch support where the hillside had been blasted away. 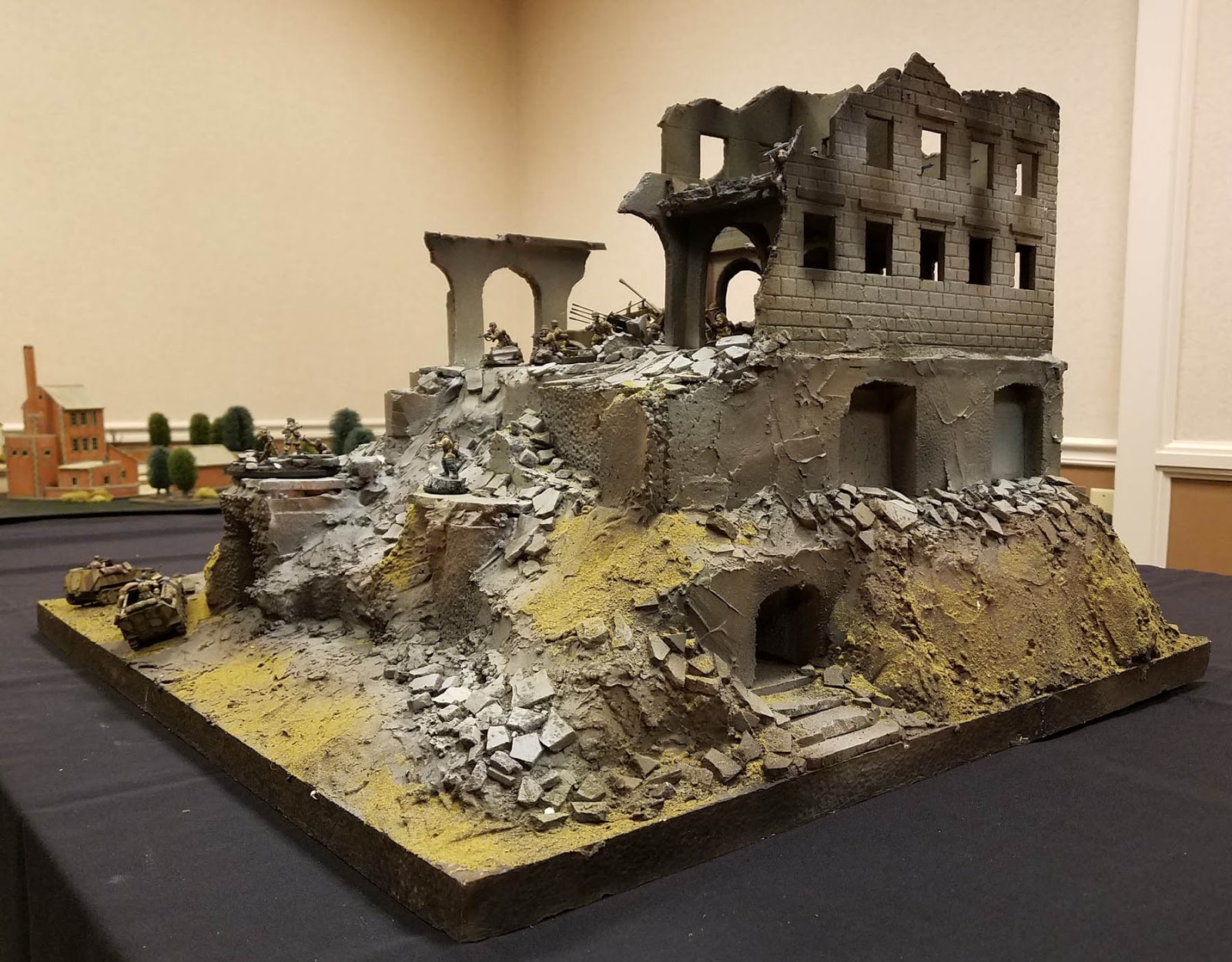 One thing I wanted for this overall piece was "openness".  That is, I could get down to this angle and be able to see all the way through it.  This is a distinct property of ruins such as these, and I wanted to capture that. 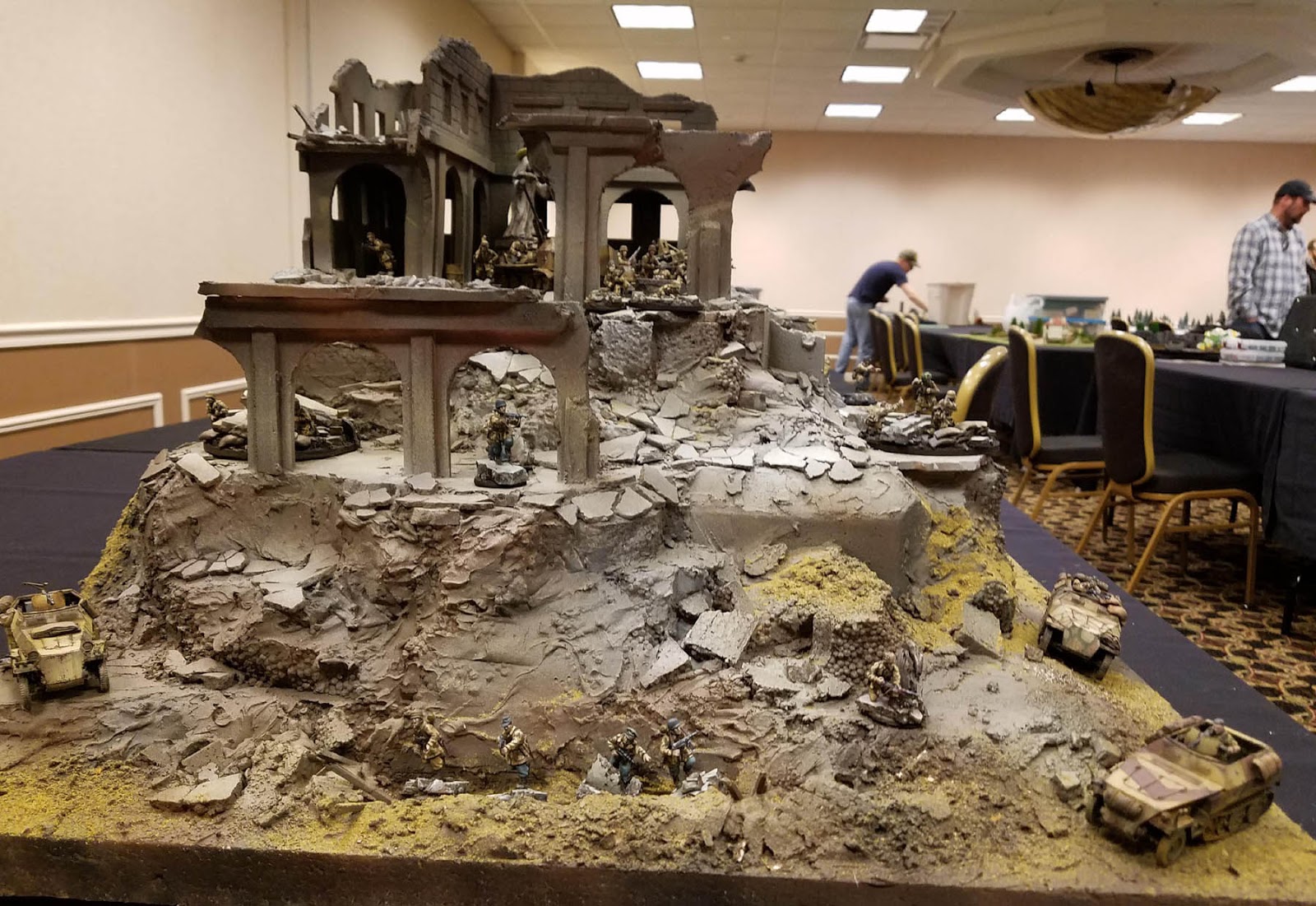 If you recall the method I used to create these broken floors, and how easy that was... these images made me even more happy!  Here's a peek at the blog post explaining them: 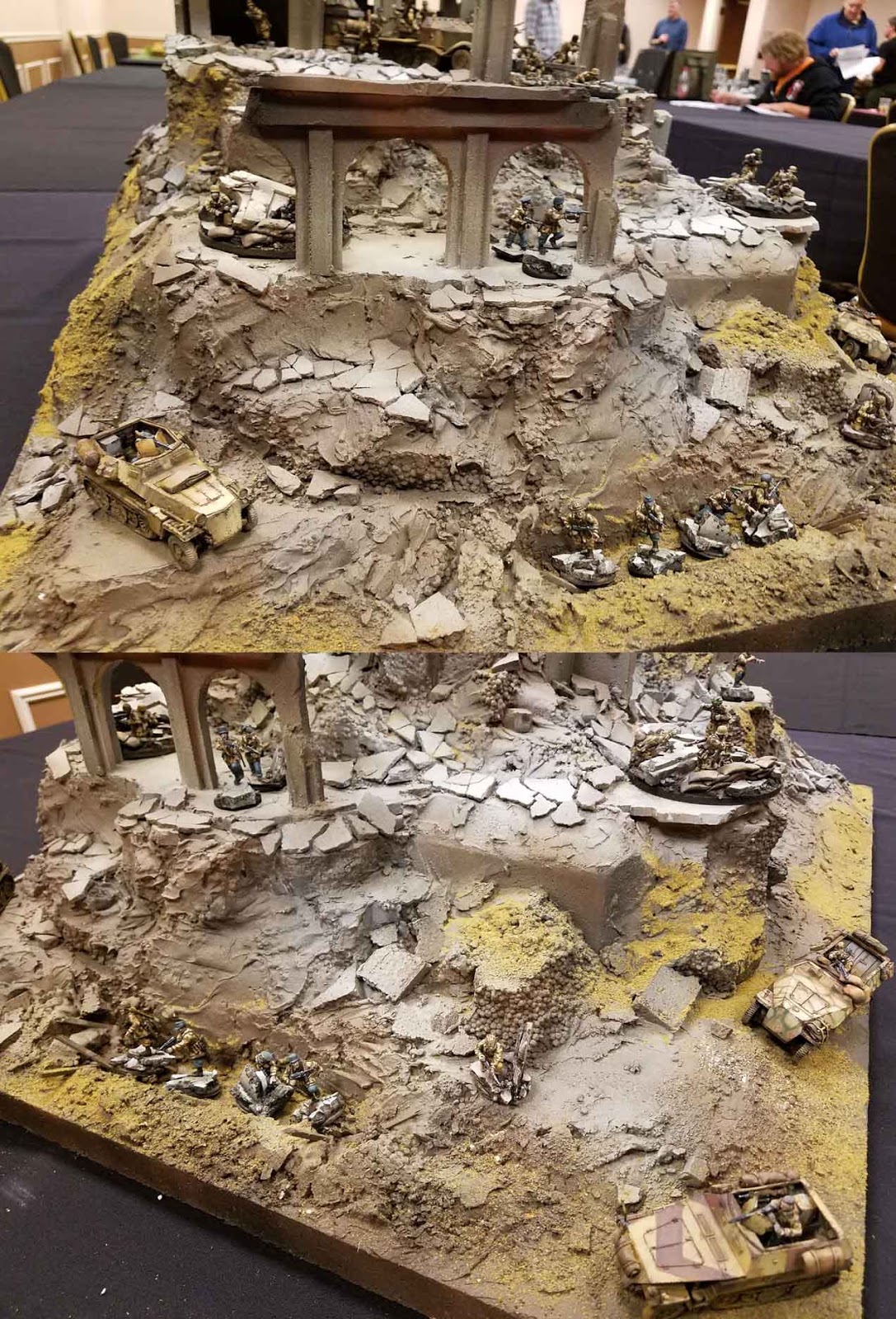 I was so thrilled to see how the figures looked in the broken floor rubble!  Just as I designed, they could stand on top of the rubble without tipping over.  This bodes well for all the urban ruins that I want to create for Stalingrad, Berlin, Budapest, etc. 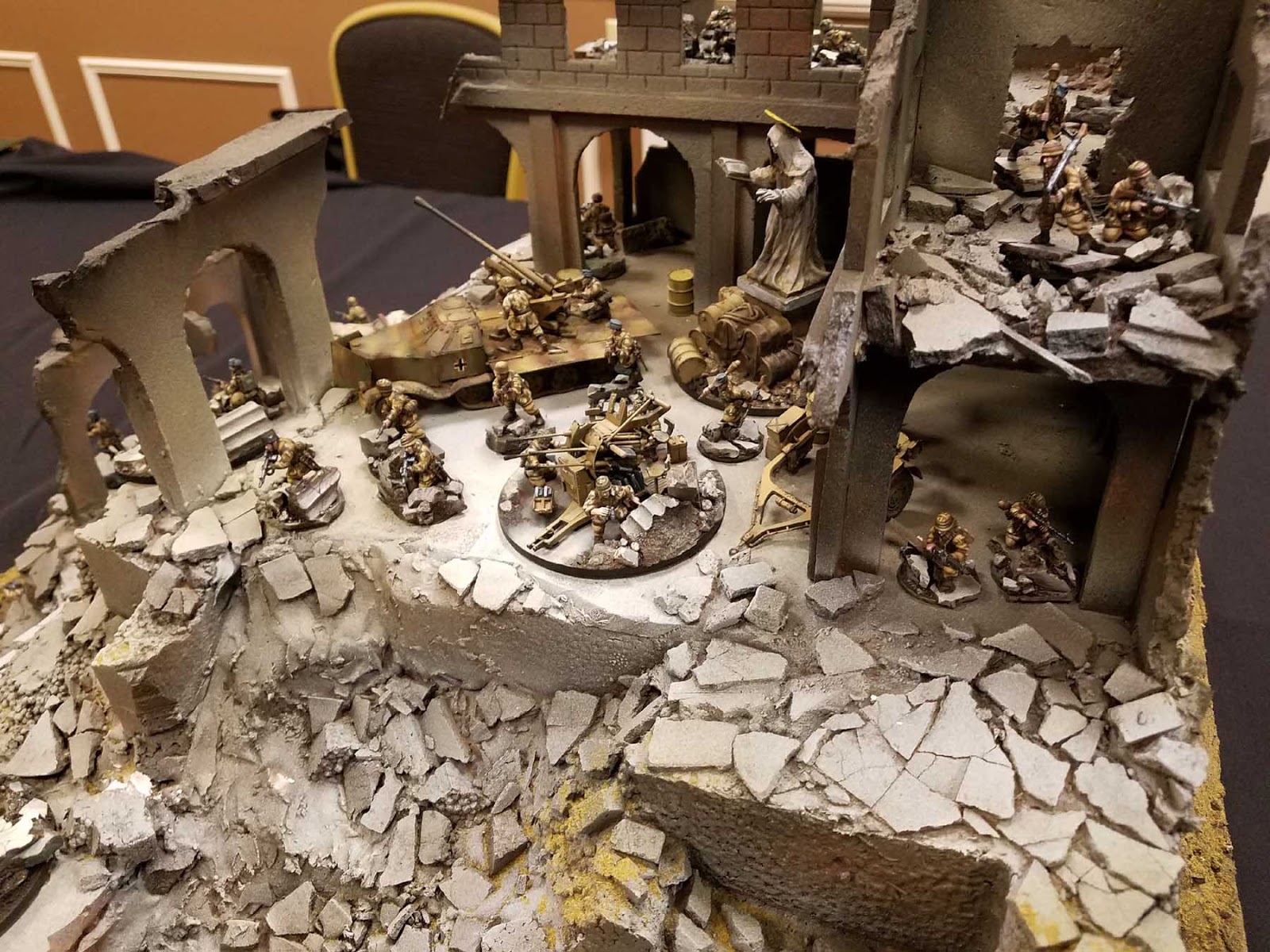 I will be doing another post where I show the photos I was able to take during the games.  My result was far beyond anything I could have imagined heading into this event, so stay tuned!!! 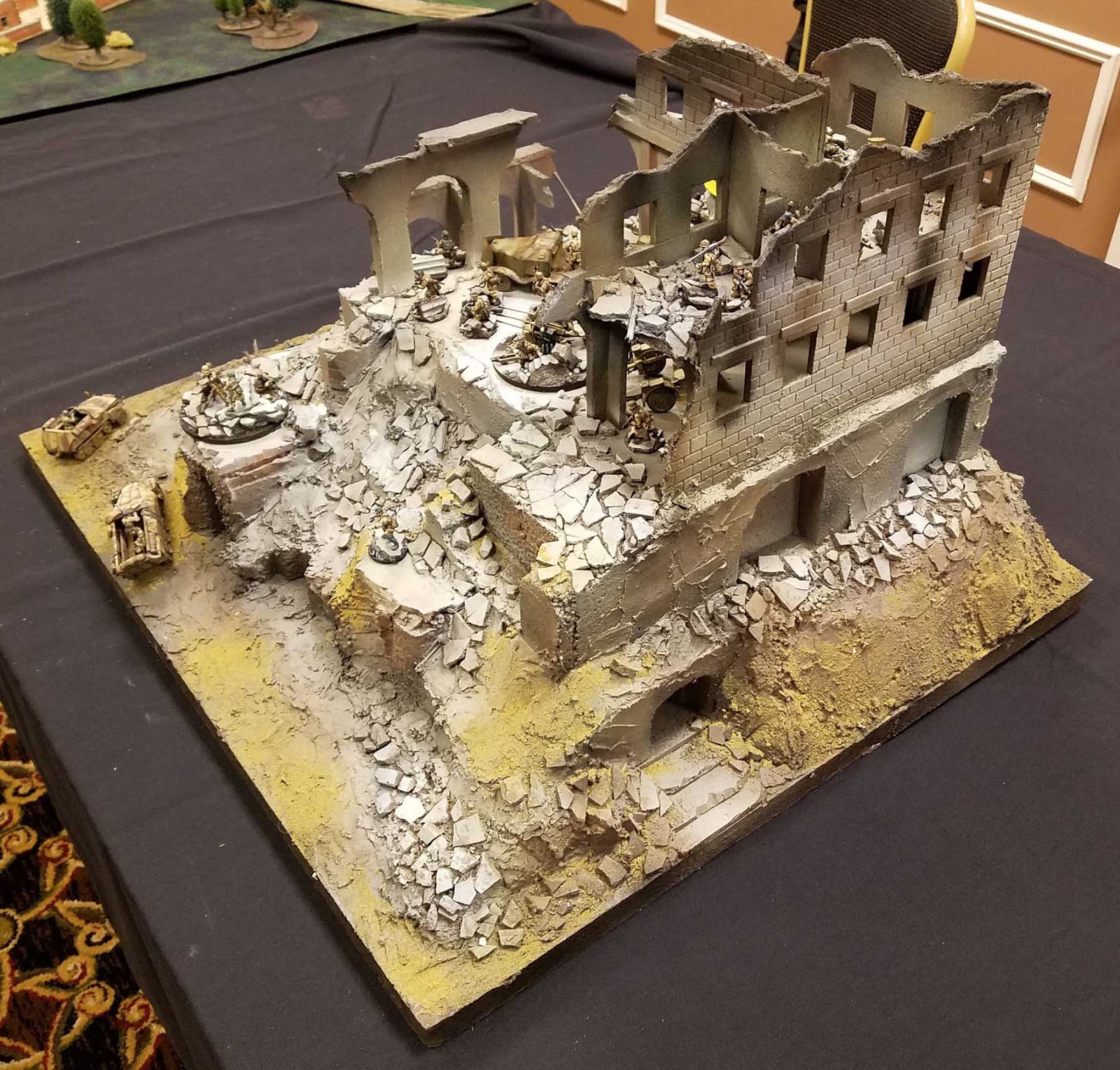 Posted by wappellious at 10:27 AM No comments: