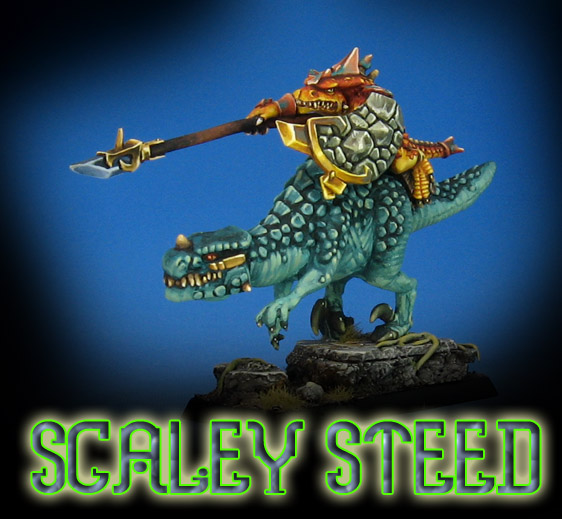 We head to the way back machine to check out another old unit from days gone by.  This Cold One and Saurus rider were part of the first Golden Demon winning unit that I ever did in 2007.

Lizardmen were my first Warhammer army, and this was the most challenging of the early units.  I heavily converted some Saurus Warriors to make the Temple Guard, along with the Terradons and Engines of the Gods.

The unit itself never saw much action, since it was too slow to keep up with other fast units, and not fast enough to outflank most infantry blocks.

I believe I have mentioned the vast amount of failed Stupidity rolls with these poor guys.  After failing that 4 turns in a row, I gave up on the unit for good.  The opponent didn't even bother to shoot at or charge them, since they had wandered aimlessly into a forest, not scoring a single point.

Some you you will also recognize that these are the older version on the cold ones from 2002-3.  While the more recent plastic versions have more dynamism than these... there is sentimental value in the original unit!