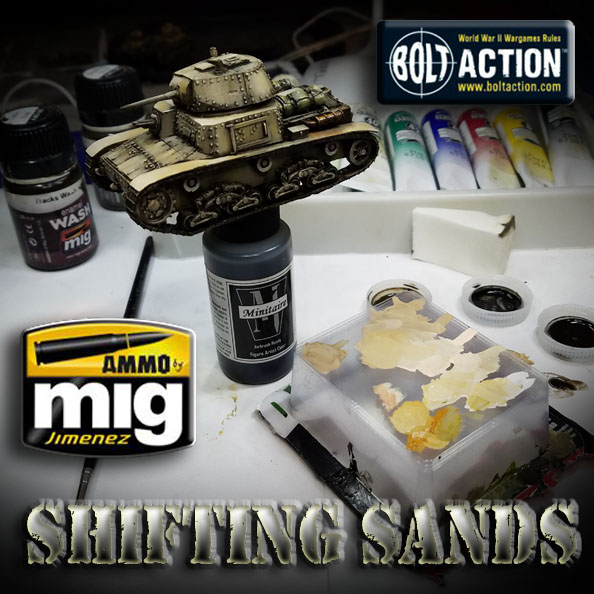 Just before Thanksgiving, I had a chance to get back into the oil paints again.  These images are from a Google Hangout that I did to show how I use the Mig Ammo OilBrushers.

There are a few of the Mig Ammo washes in the little caps... Afrika Korps wash, Dark Wash and Brown for Green Vehicles.  The idea was to show how to vary the tones on a "limited palette" tan color scheme.

I alternated on each wash color as I moved around the vehicle, making sure to have warmer or cooler tones on each part of the hull.  These would be further accentuated by the addition of the OilBrushers. 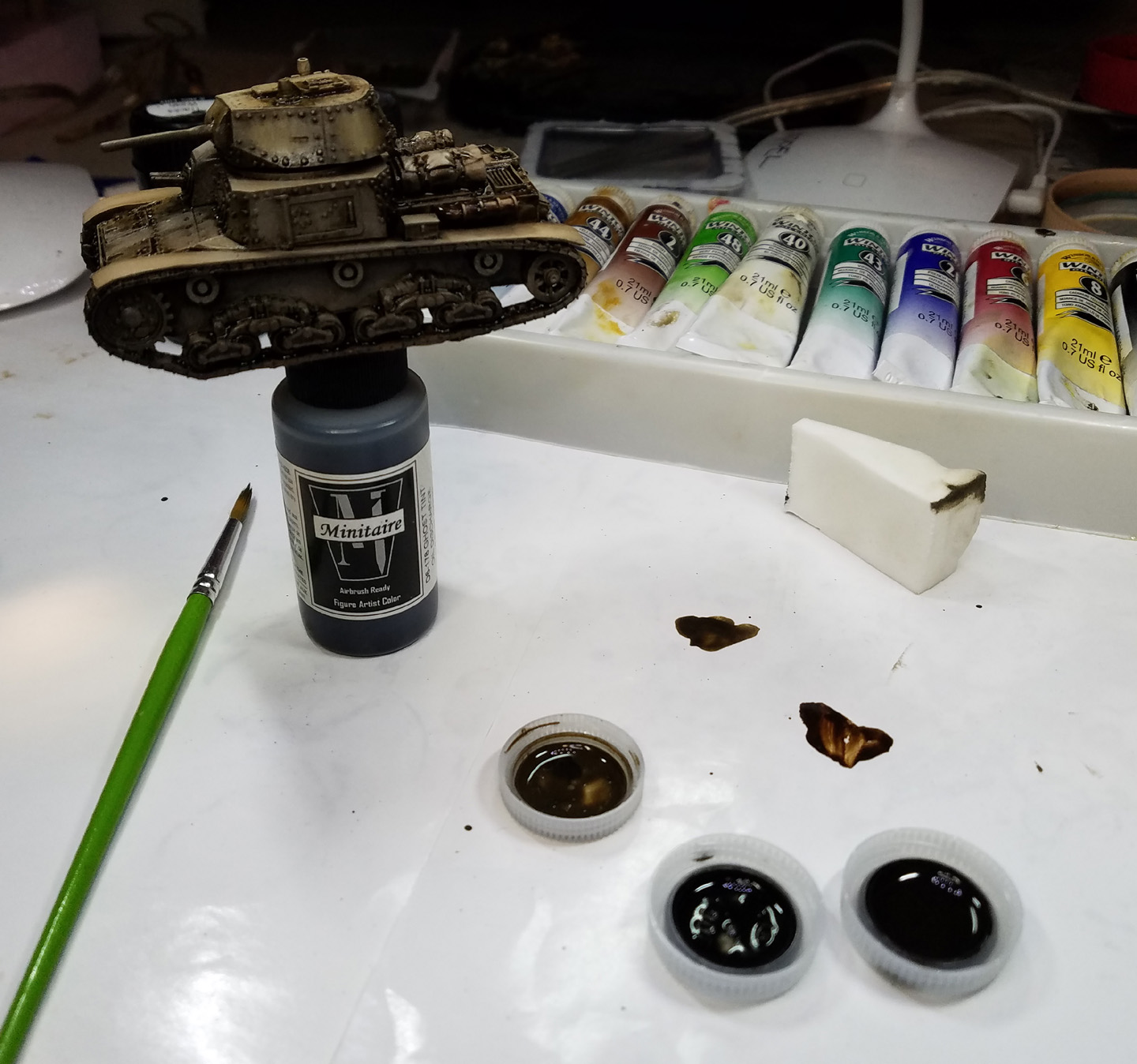 I put a few of the OilBrushers on a palette, and you can see the variety there as well.  One of the tones is actually a light flesh tone.  That will be used to create the "bleaching" effect of the sun on the vehicle.

As I mentioned many times during the session, the primary source of weathering on these desert vehicles is bleaching, as opposed to rust and mud! 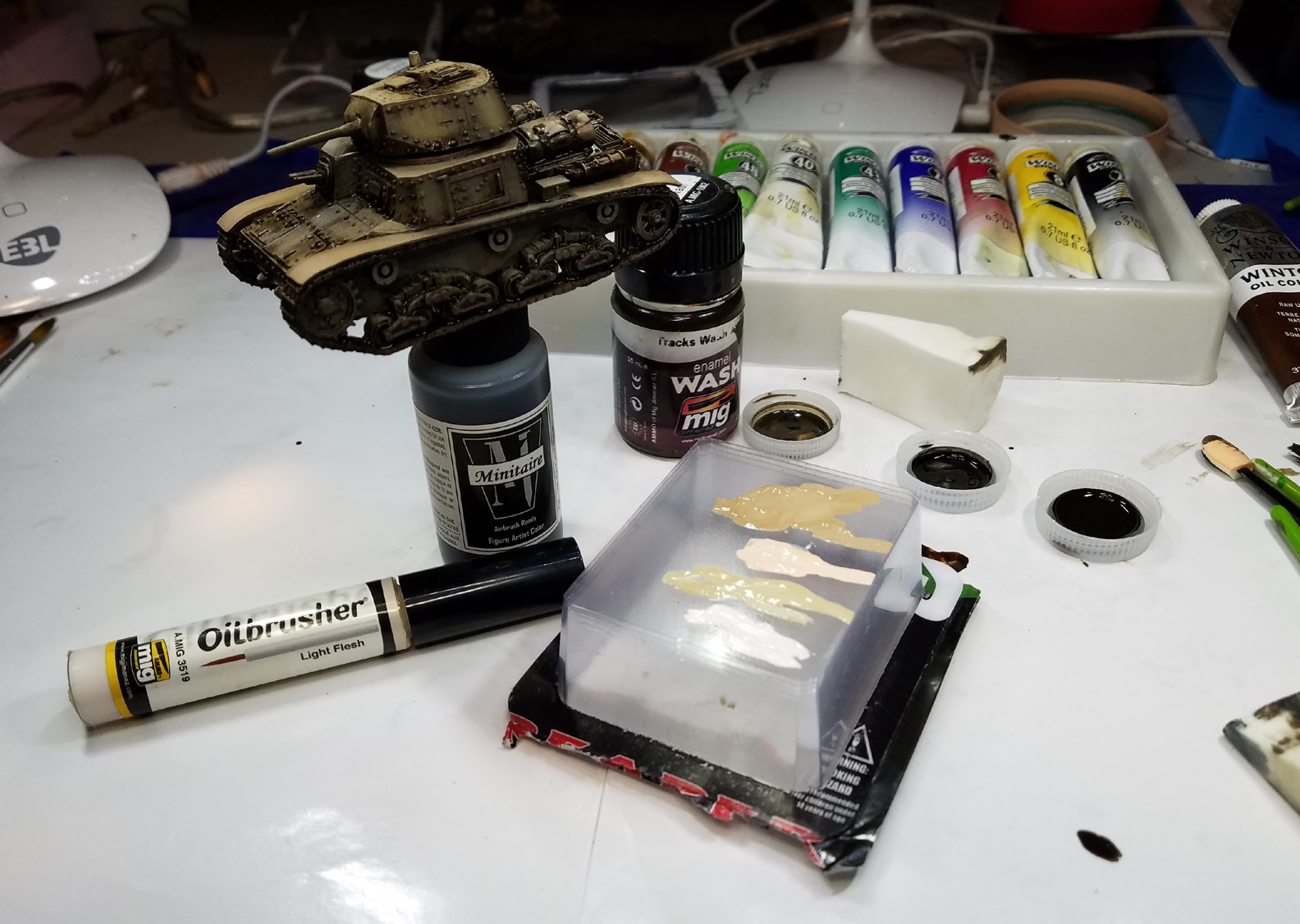 I love working with the oils, because the ability to mix right on the surface as if it were the palette is so much fun!  Using those initial washes as a base, I could allow the more opaque layers of OilBrushers to mix with my washes, creating even more subtle color transitions. 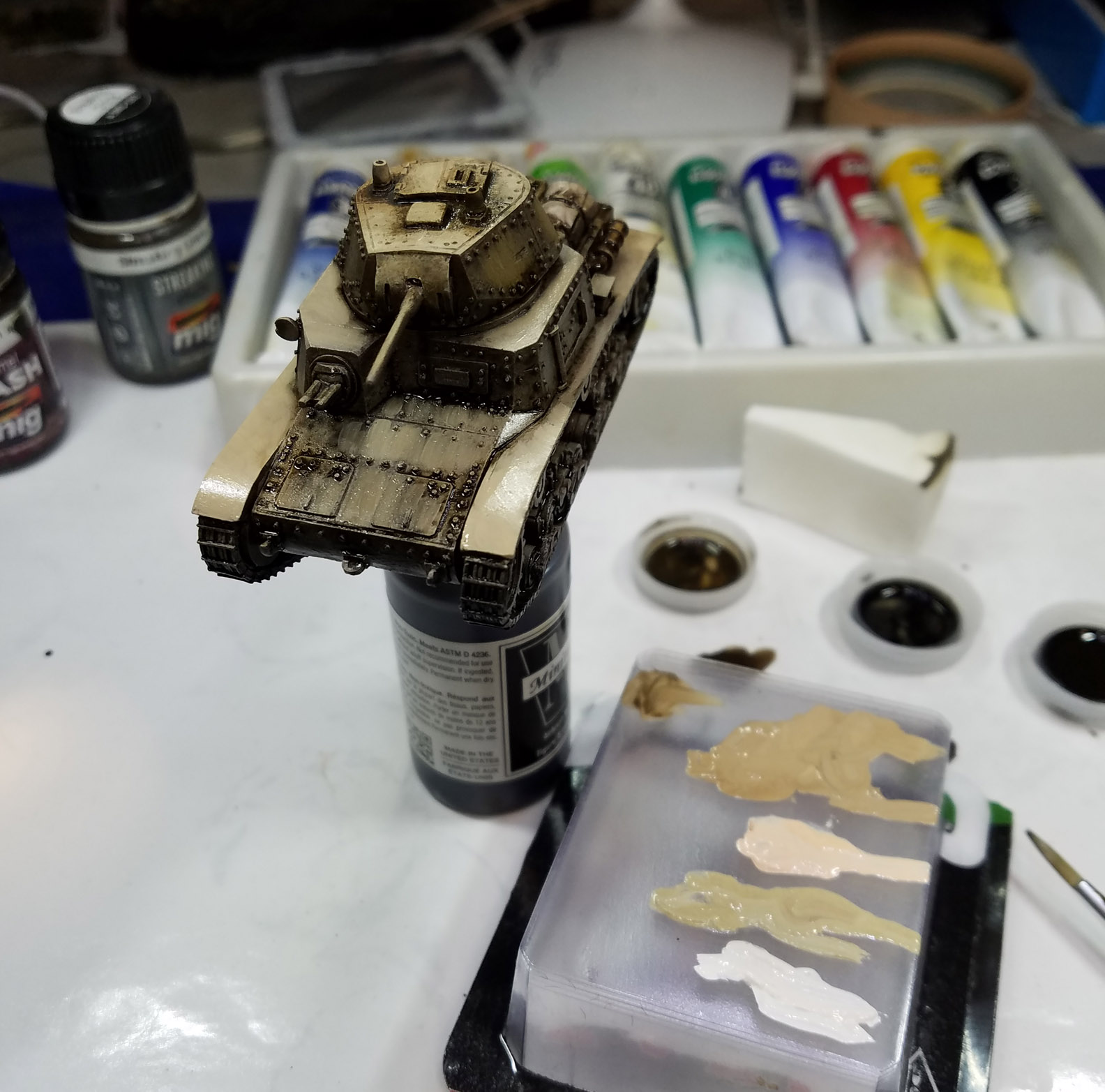 This is especially true in areas such as the lower hull.  The Dark Wash is more of a Van Dyke Brown tone, which is a little cooler.  By mixing in the more opaque OilBrusher colors with this, I was able to get more of a shadow tone without having to mix special colors to create them. 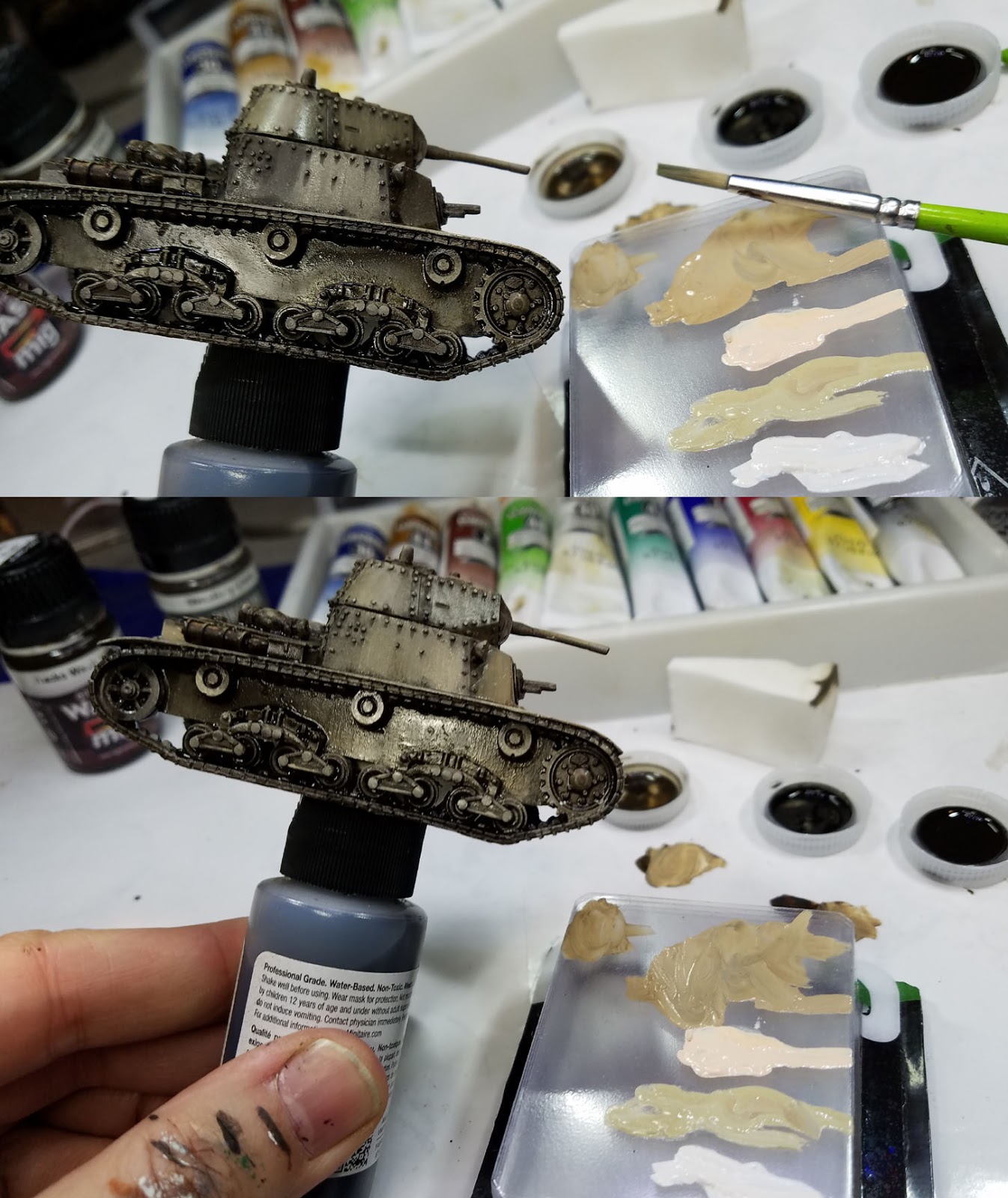 Meanwhile, on the upper hull, I allowed the lighter more opaque tones to mix in with the Afrika Korps wash which was already in place.  Again, it is all about mixing right on the surface.  The whole point of using a material such as oil paints is to be able to do something like this, so why not take advantage of it! 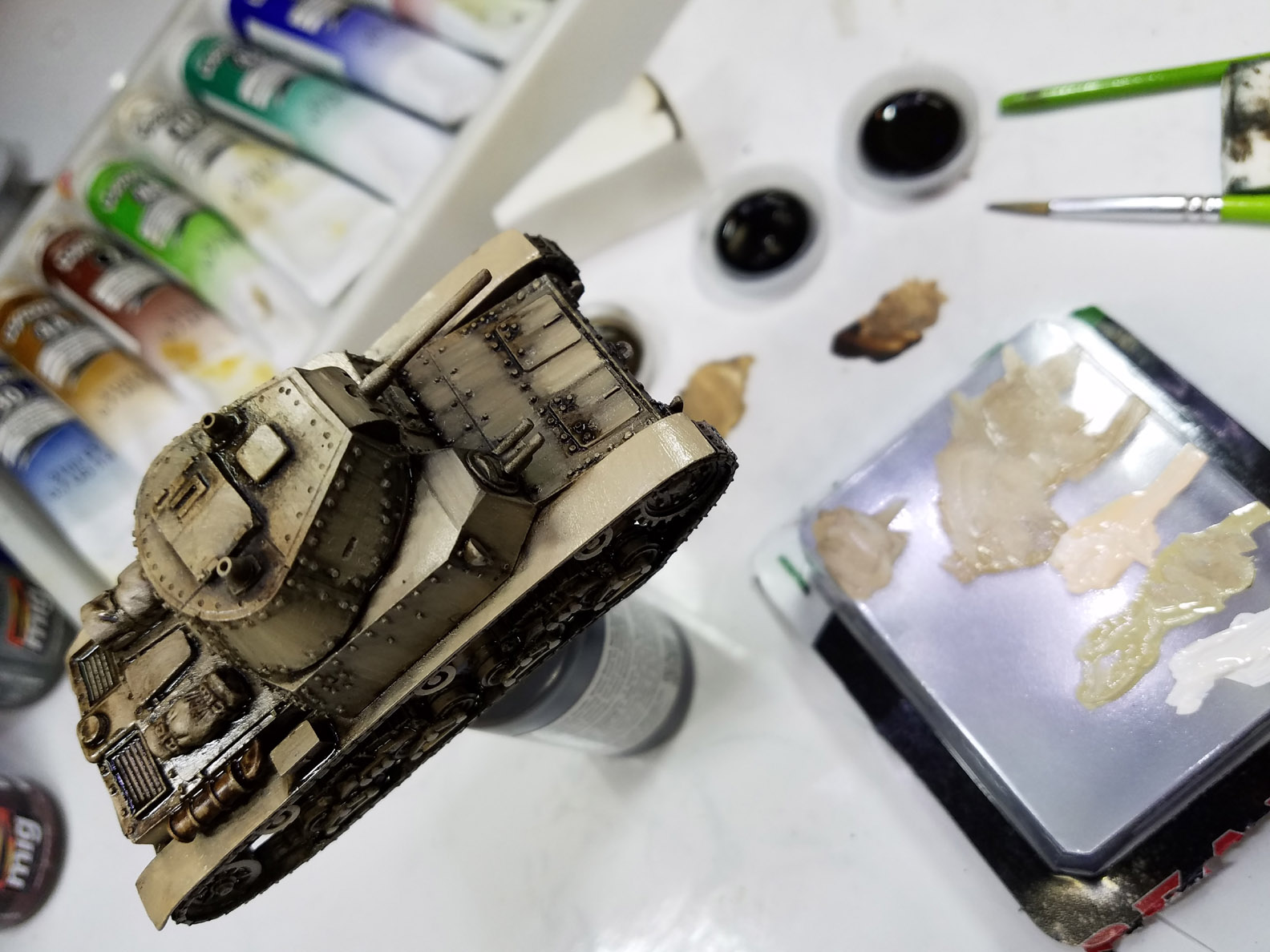 More mixing takes place, adding some layers of lighter colors.  While it is possible to do this kind of mixing with acrylics, it is nice to be able to take my time!  Also, I am trying to be mindful of the bleaching effect that I want to create. It is important to keep in mind that oil paints should be applied in thinner or thicker layers.  Unlike acrylics, thinner layers of oil paint will not adhere to thin layers already in place.  Therefore, you will want to apply thicker paint to thin layers, and vice versa. 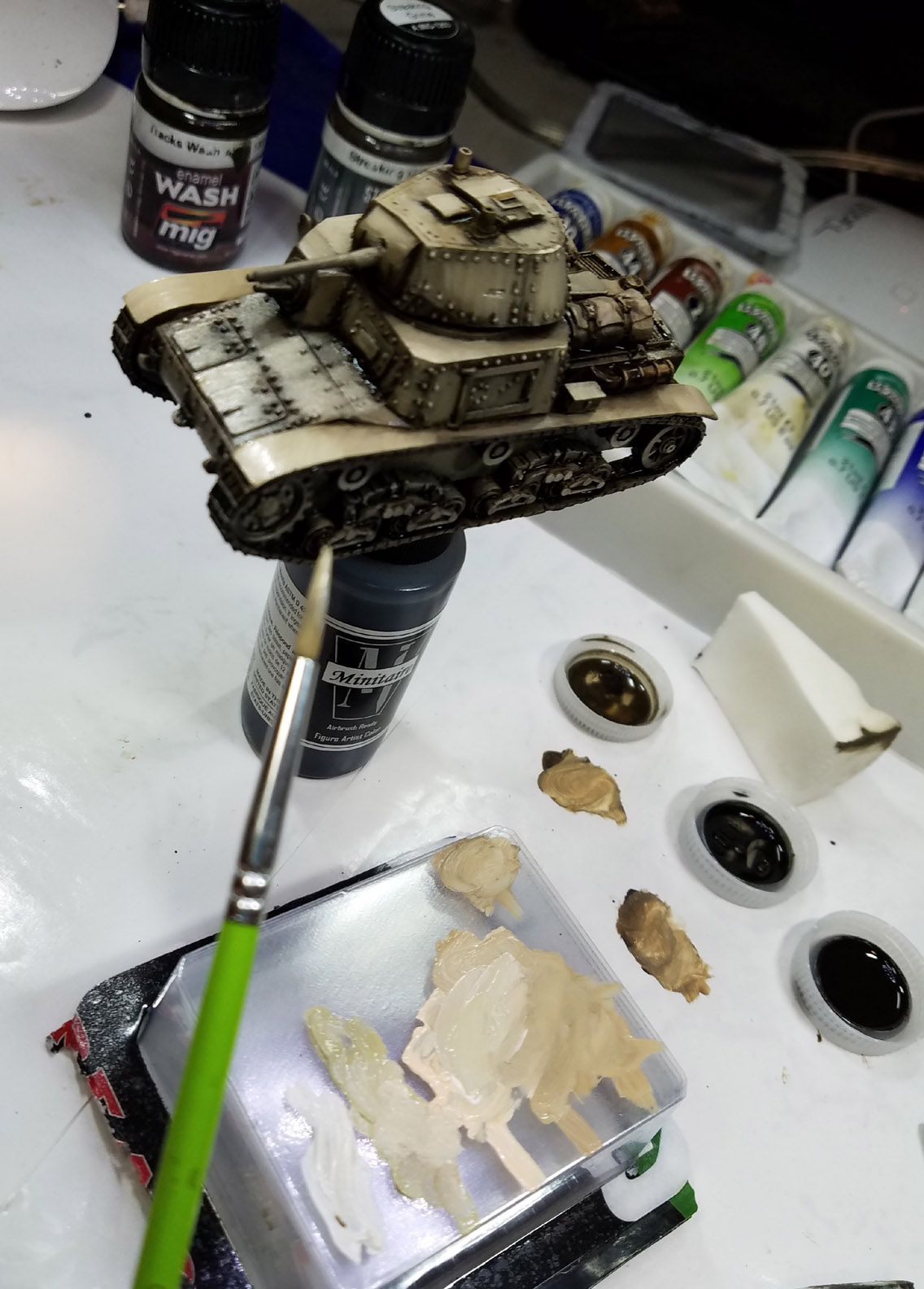 I used a very nice White Spirits to thin paints down, but the OilBrushers are already a very nice consistency, so you don't really have to worry too much about thinning them down.

I also wanted to show how to manipulate and shift the overall tones without having to use washes or filters.  I added a bit of the Ochre to the palette, and that was mixed into existing layers of color to make it a brighter tan.

This higher intensity tan was needed to give that sense of bleaching that I mentioned earlier.  Adding this more saturated tone made the surrounding areas more bleached out by comparison.

Some rusting effects were added to the exhausts, and even a bit on the surrounding areas. 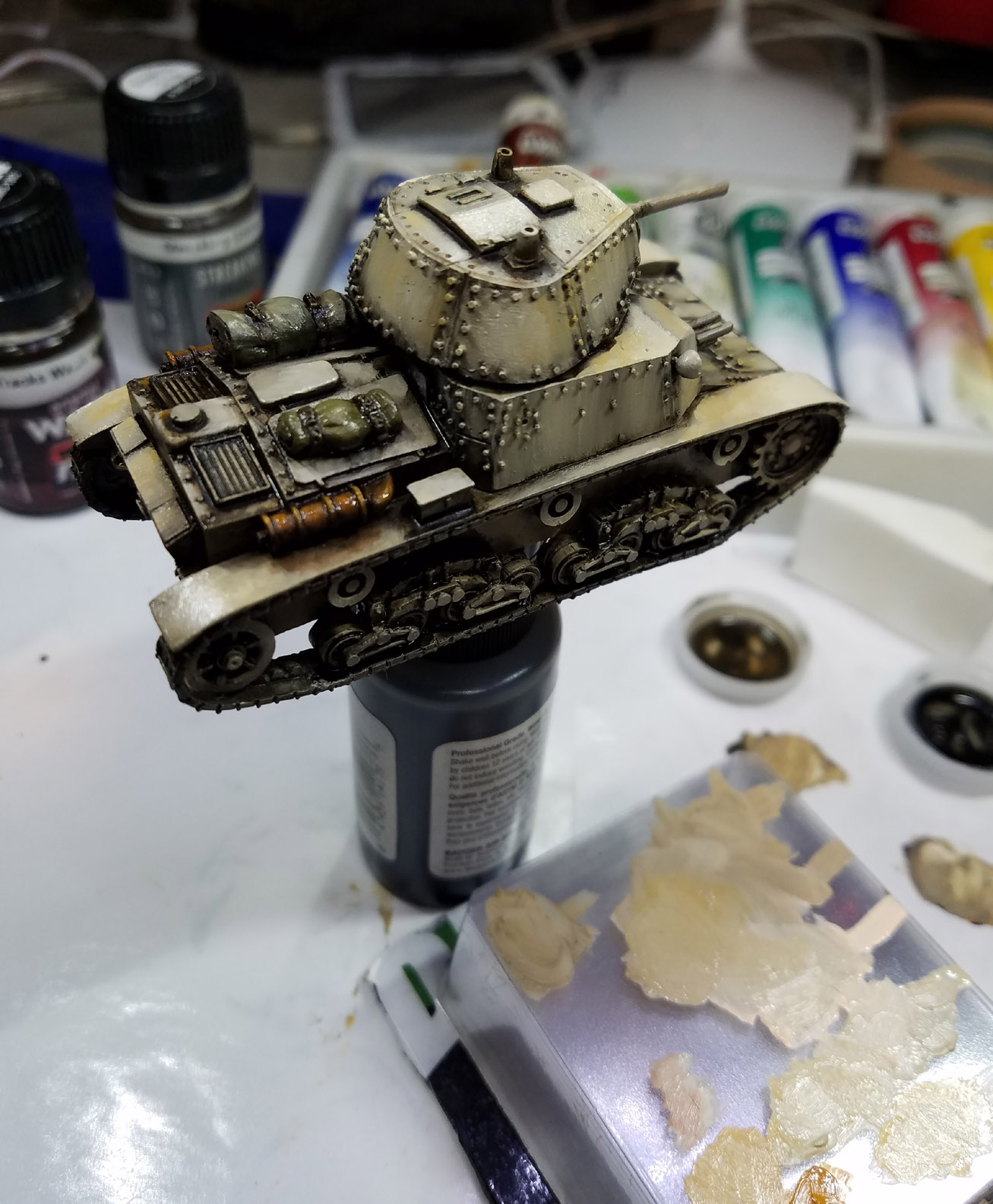 All the while I was working with the oils, I had to keep in mind what I wanted to do later with weathering powders.  I want to have the lighter dusting effect down in the crevices, so I have to keep those recessed areas a little darker than I might do otherwise. 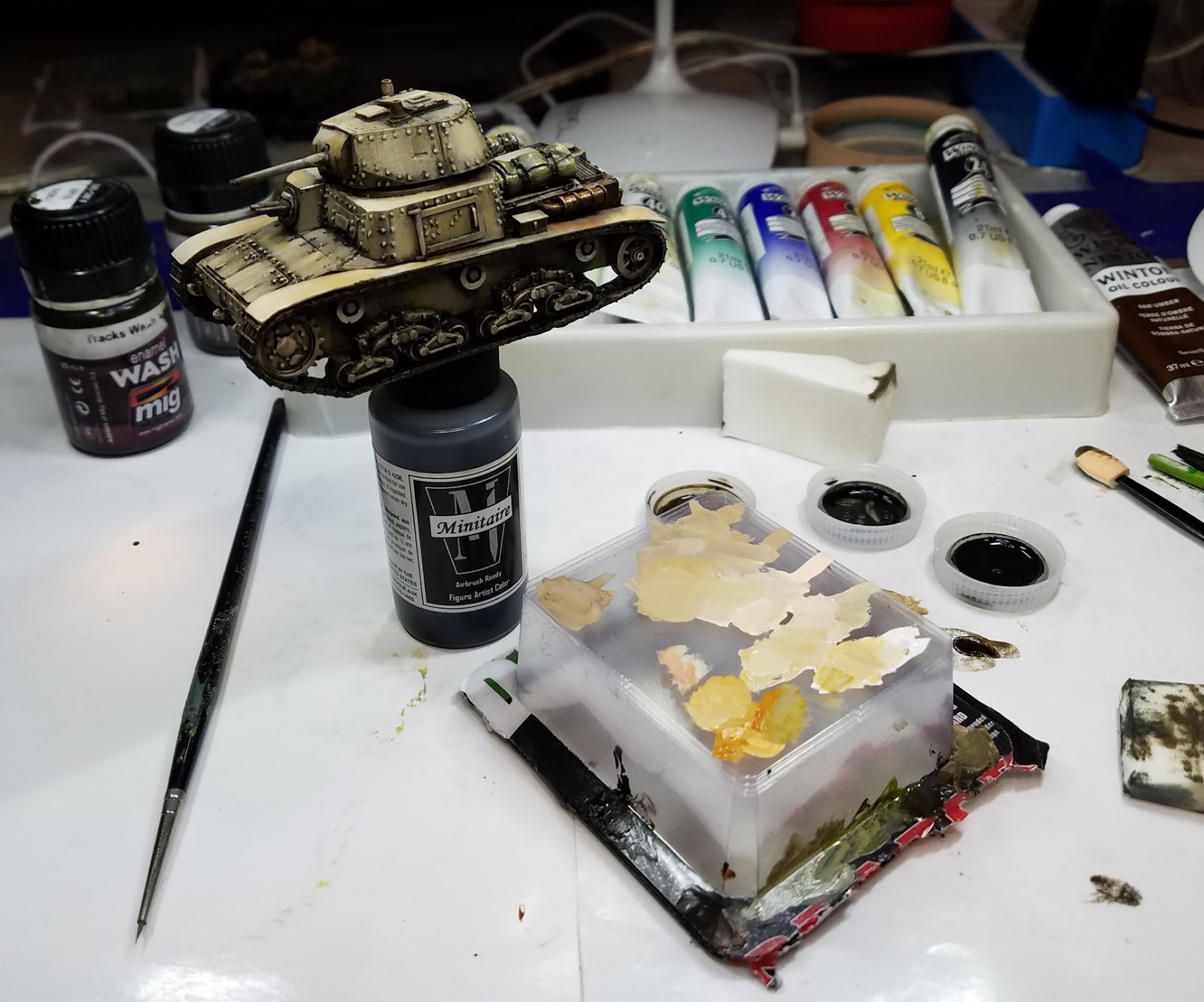 That is also true for the lower sections of the hull, where the sand effect will be very pronounced. 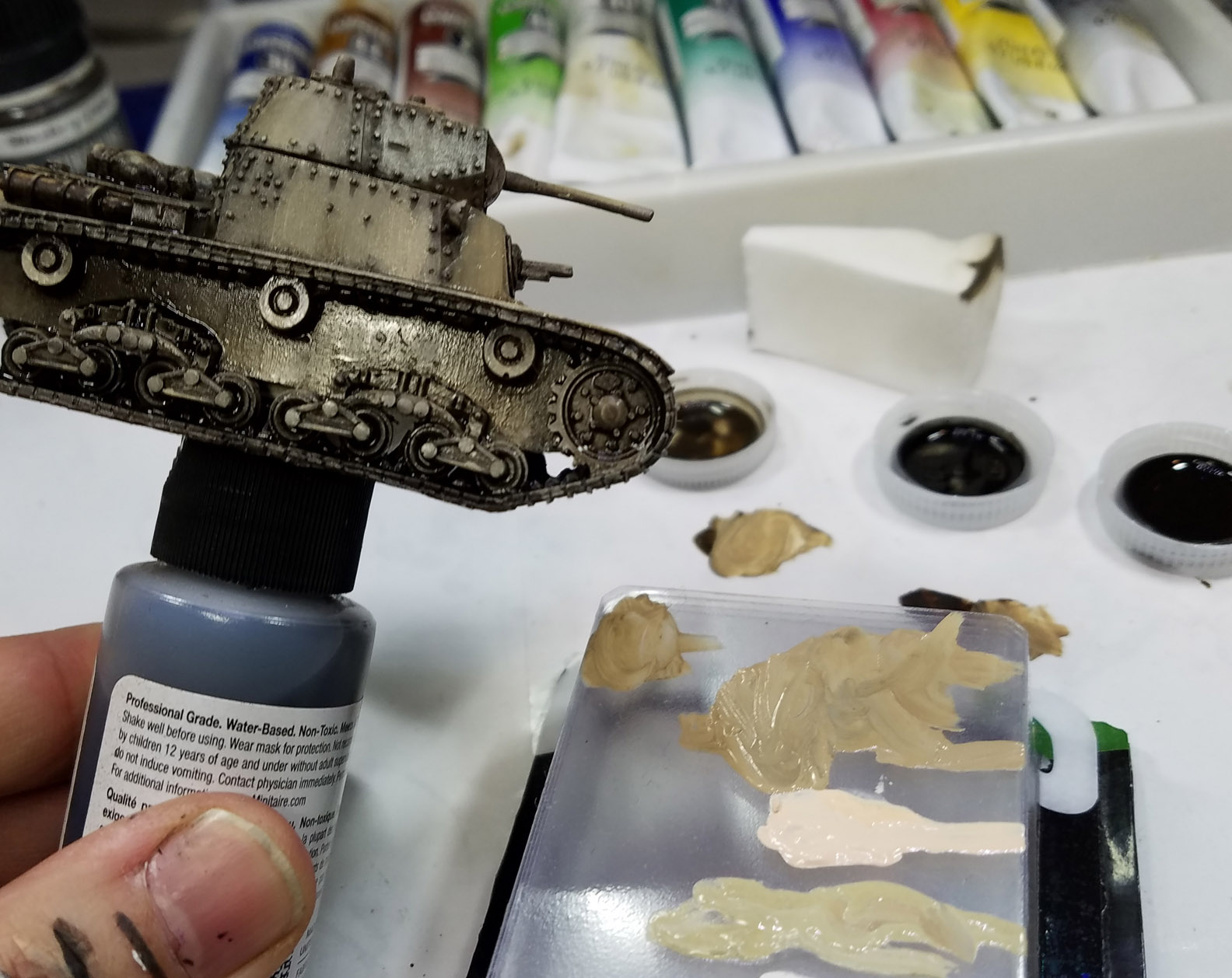 This hangout session was followed by a Facebook live painting session that showed how to do these same desert effects using regular oil paints.  You can watch that here: 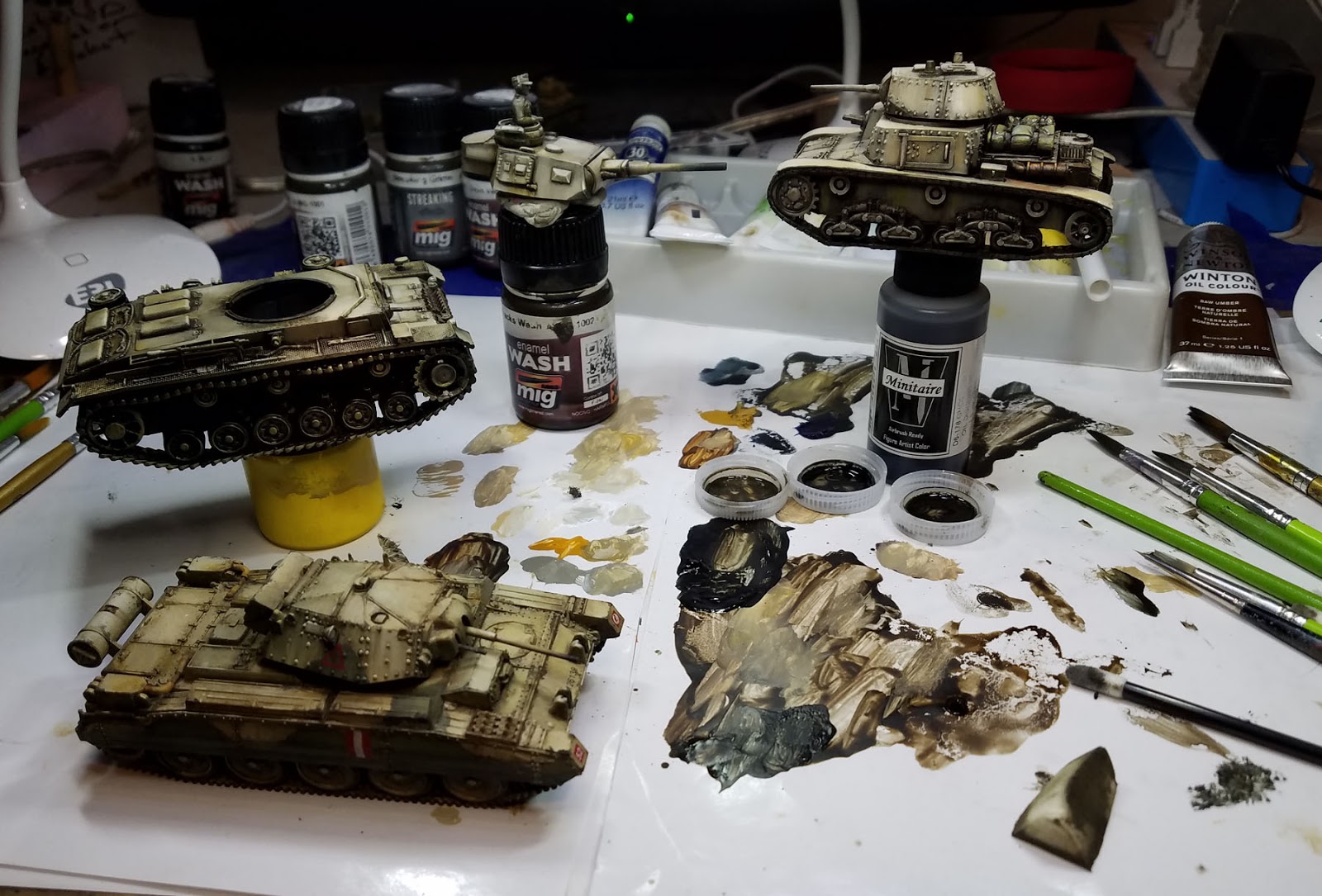