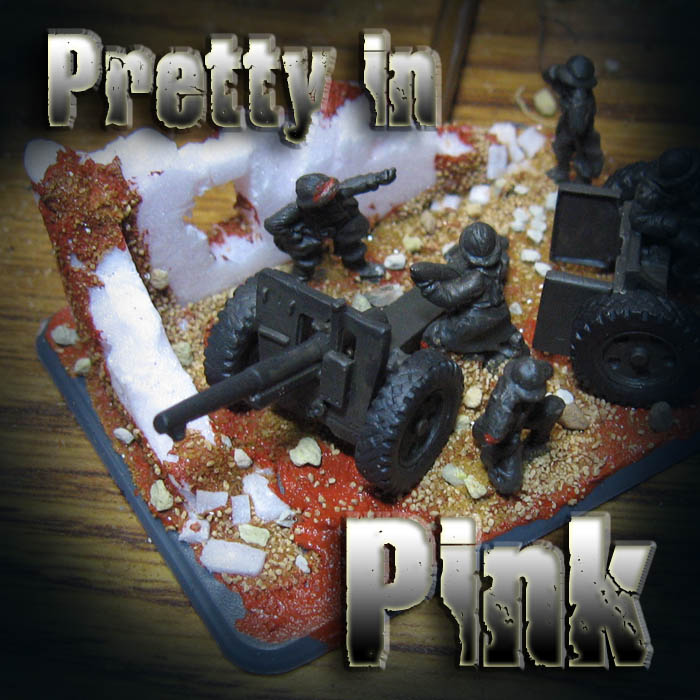 Of all the different basing ideas I had for the French artillery, this is the one I was really looking forward to trying out!

I had already done something just like this for our Memoir '44 terrain, and it had worked out very well for that scale.  Now it was time to give it a try for Flames of War.  The pink foam that you see is less than 1/4 inch thick, and is used as an underlayment for flooring.  It usually comes in 2 x 4 foot sheets. 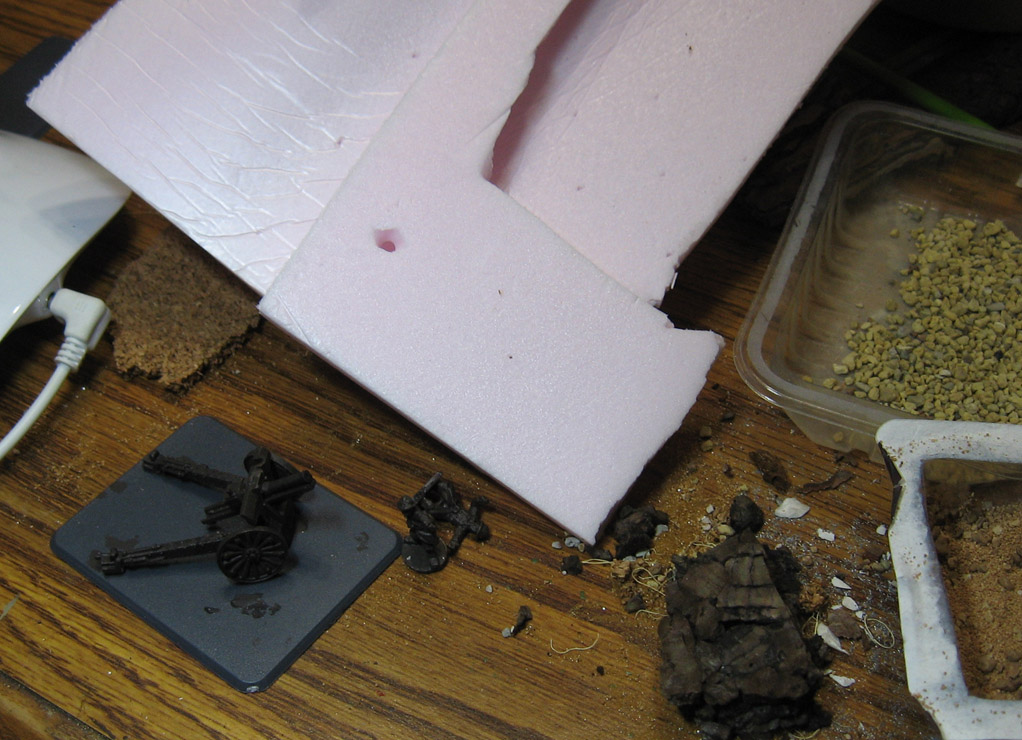 When I made the terrain stands for the Memoir figures, I did two broken walls, leaving one end open.  This will be perfect for the artillery. 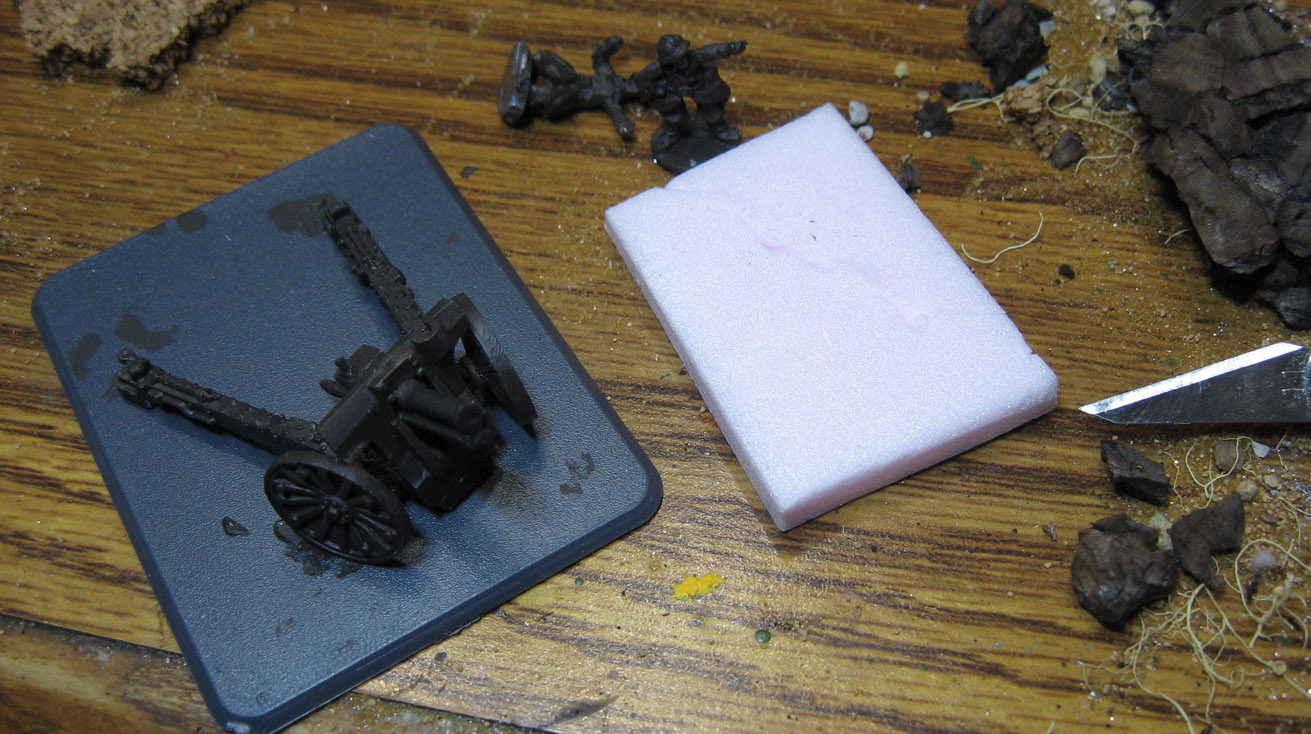 I chipped away at the edges and outer surfaces to create blast marks, bullet holes, and even a window.  I must be sure to leave enough room for the crew however! 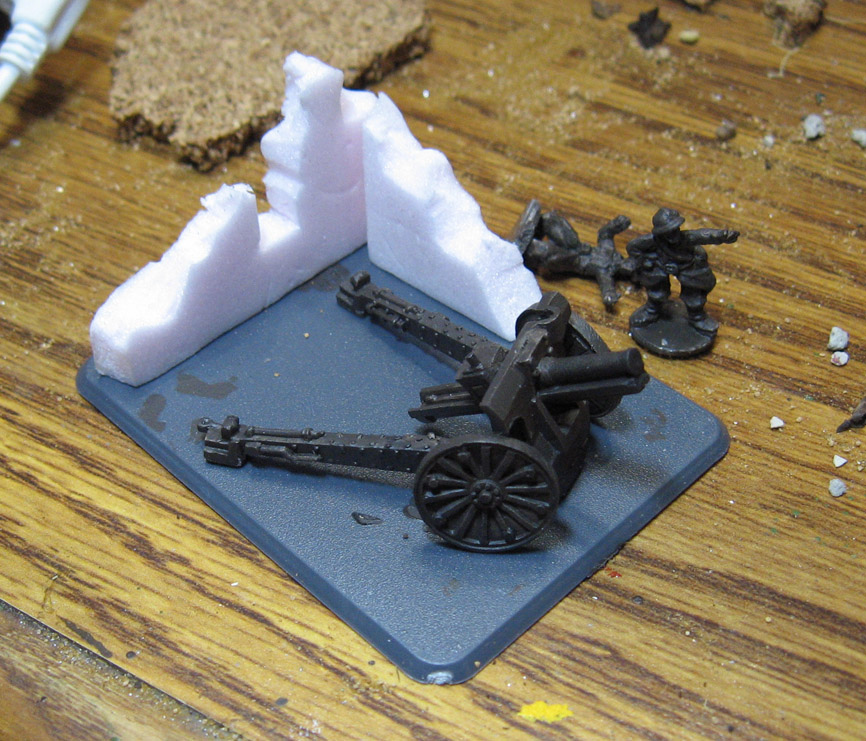 Here's a peek at the outside walls.  Who knows, I might even put a bit of ivy on them. :-) 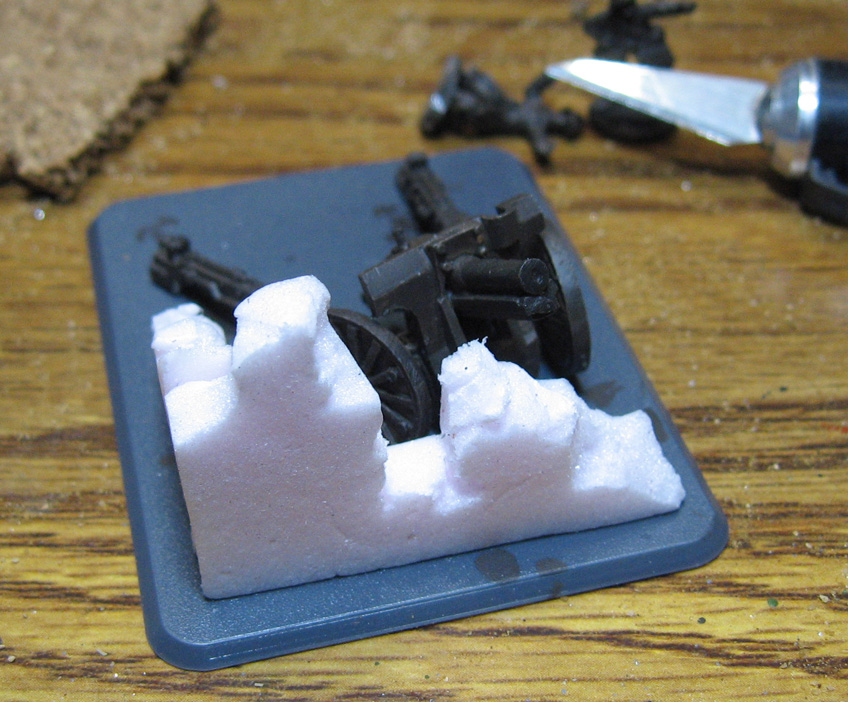 In order to get them glued together, and provide some additional texture, I mixed the Oxide Paste with Elmer's glue to give it more adhesive power.  Not only did I use it to glue the two sections onto the base, but I also used it to mortar them to each other.

You can also see the tiny pieces of foam which I cut to use as bricks. 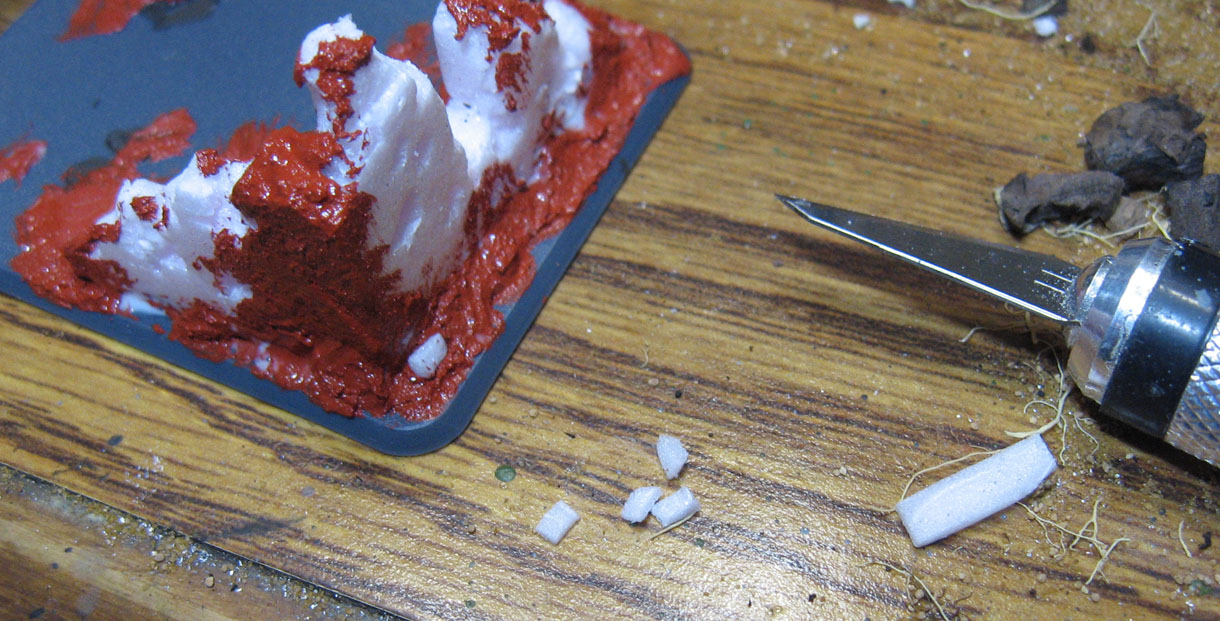 I simply place the bricks into the Oxide Paste and glue mixture at the ends of the broken wall sections.  Again, I want to leave room for the footprint of the gun carriage and the crew. 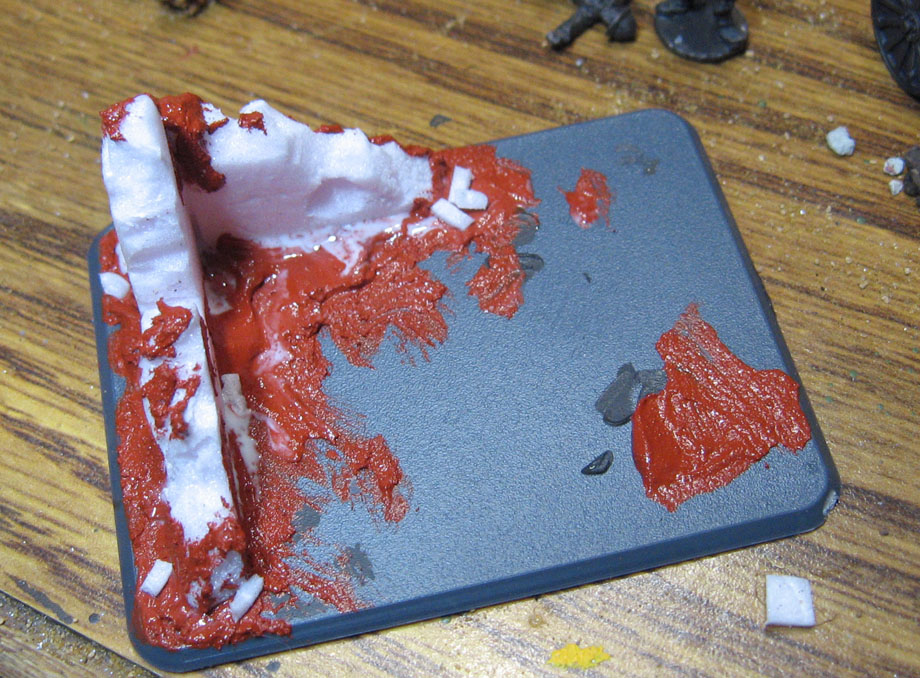 I added my normal series of rocks and gravel, trying to create piles of faux rubble. 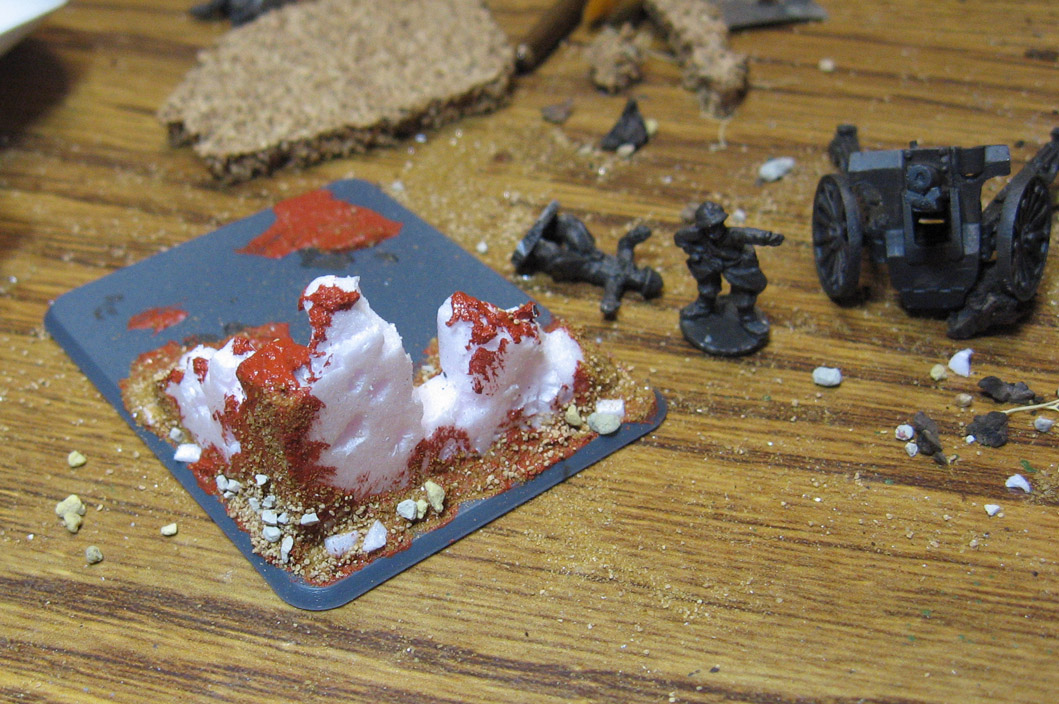 With the crew incorporated, I used more rocks and sand to blend in the bases. 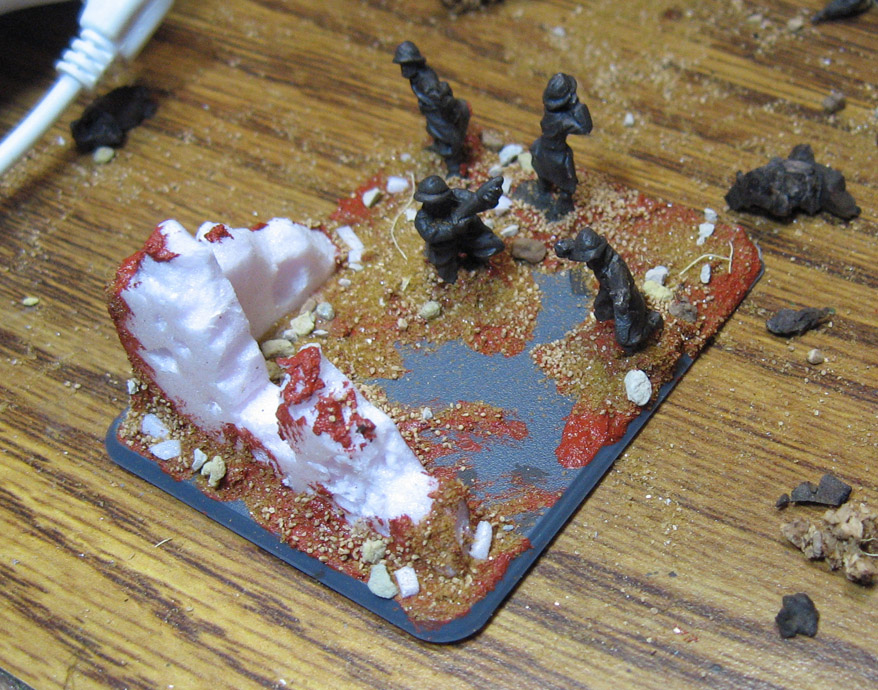 The crew and gun all fit nicely on the base, even with the rubble. 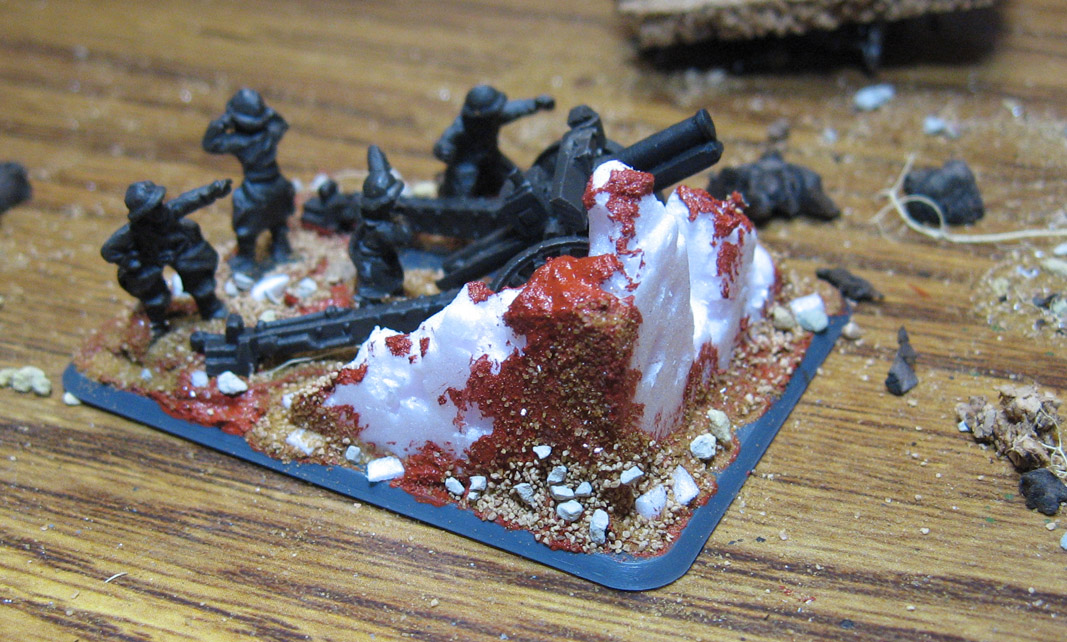 The crew are also spaced far enough from the walls so that I can still get a pint brush on them.  Minor details! 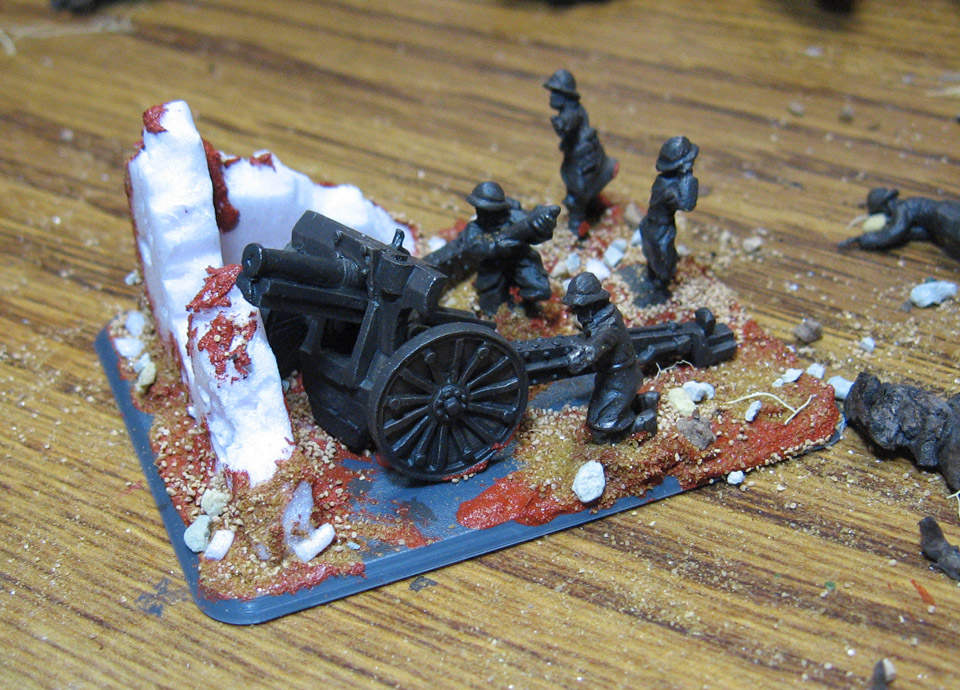 On the far left of the tray, you can see that I did one of these shattered ruins for a command team.

I think I tried to make on base of this style for each of my artillery units.  This was the most challenging, as I also had to deal with the limber.

This technique also works well on a slightly large scale, which means that I can make a host of burned out ruins in no time at all for a ravaged village or even a small city for our Flames of War games!  Stay tuned... 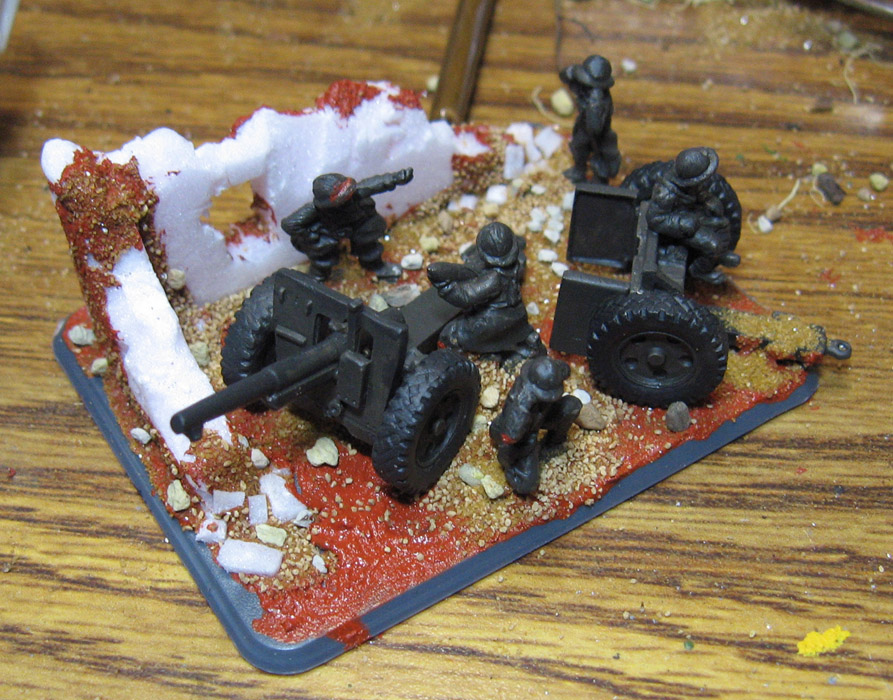 Posted by wappellious at 2:56 PM 2 comments:

A Nation in Darkness 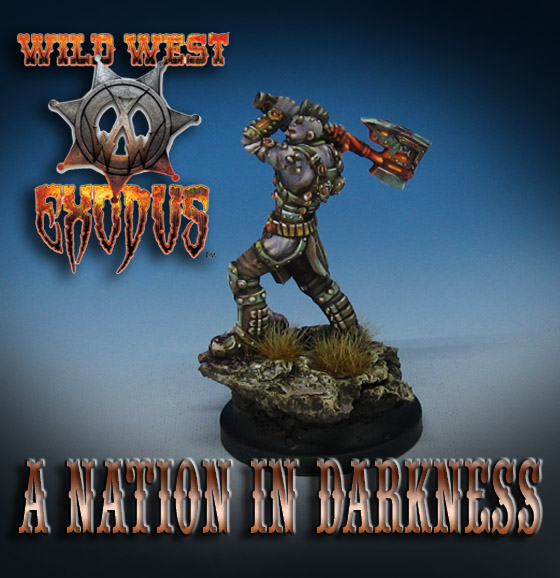 One of the four new factions from the latest Wild West Exodus kickstarter campaign was the Dark Nation, a twisted, warped version of the Warrior Nation.

While the Warrior Nation shuns the RJ-1027 powered weaponry of the other factions, some of their former brothers embraced it, and have been corrupted by it.

This is one of the Close Combat Savages of the Dark Nation Hired Hands set.  As with all of these sets, there are five Close Combat and five Long Range hired hands.  Each is in a completely unique pose, so all ten figures look dramatically different.

It was really interesting painting RJ glow on Nation figures... especially after painting several of the Scalpers with the natural blue energy!

Much more to come, so stay tuned!  Some of you are probably going to be getting your own kickstarter Dark Nation figures quite soon...

Posted by wappellious at 2:26 AM No comments: