The Battle of Bloody Lane 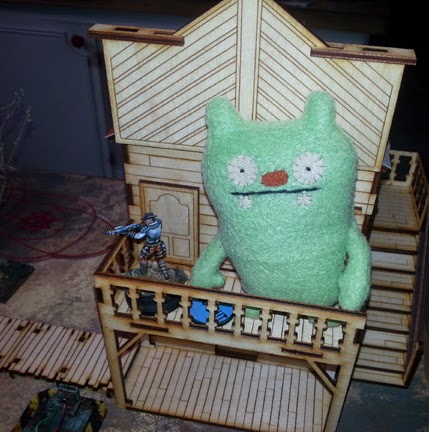 Armed with a host of new Wild West theme buildings from Burn In Designs, (and the new charging stations) it was time for the Lawmen to once again solidify their complete control over the town of Wappelville.

The Outlaws saw an opportunity to take advantage of a fantastic shoe sale which was in its final day.  They would approach from the Wappelville train station, led by Jessie James. 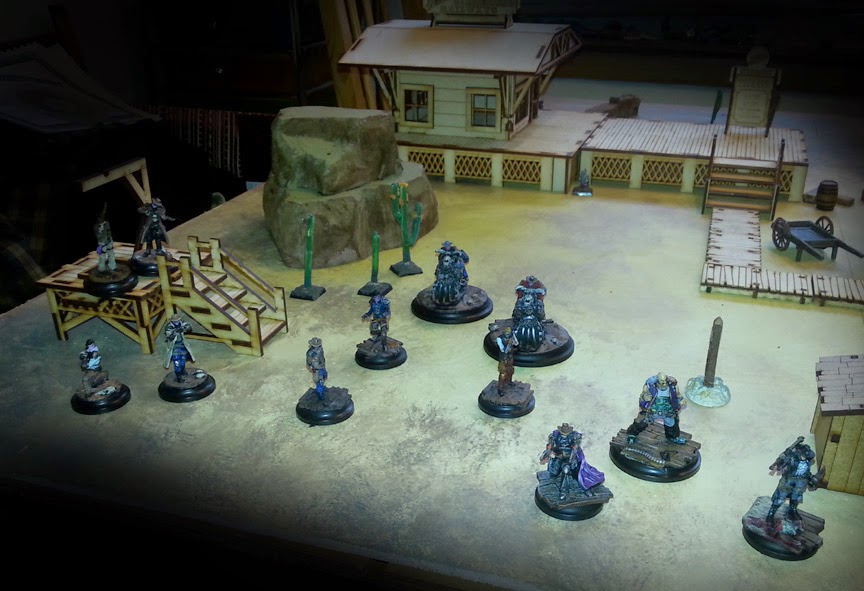 They toured the 'weekday' gallows on the edge of town.  The main gallows was on the far side... 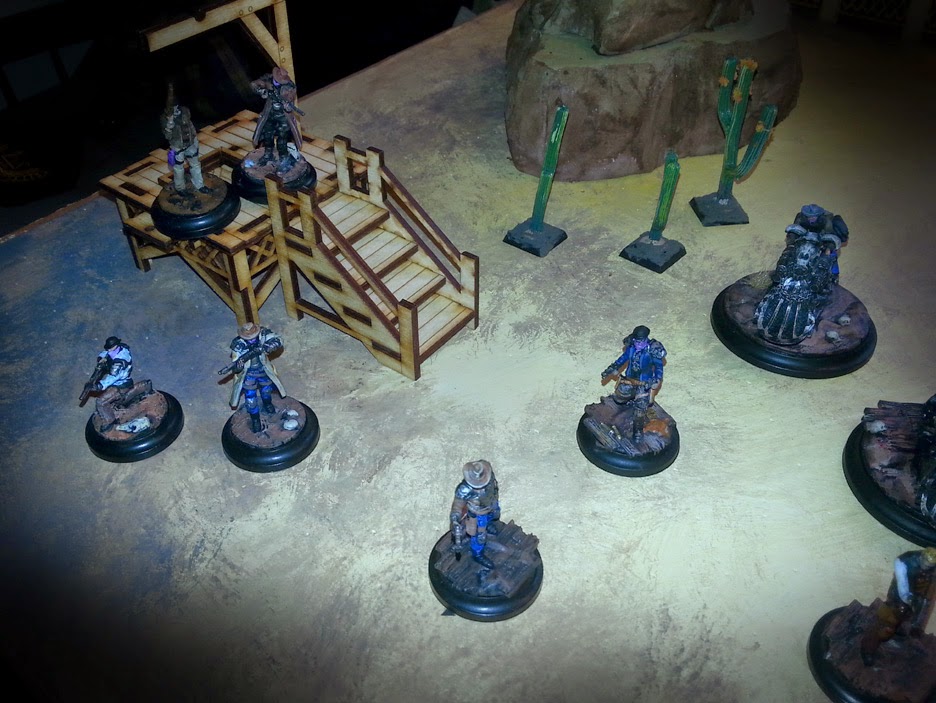 Rich brought the Wraith, a new mercenary figure which he just finished. 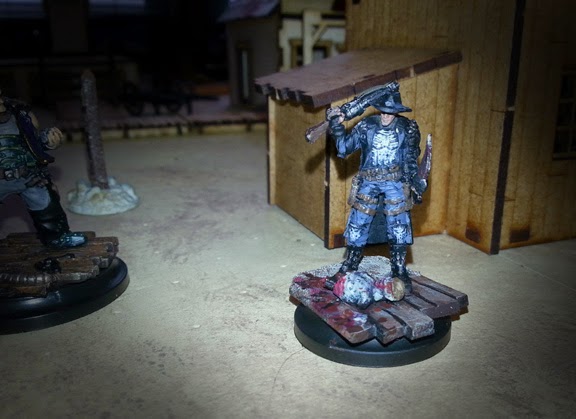 The Lawmen would try the mob of ten hand to hand Hired Hands again.  It was hoped that all the buildings would make it more likely that they would survive to get into those up close tussles! 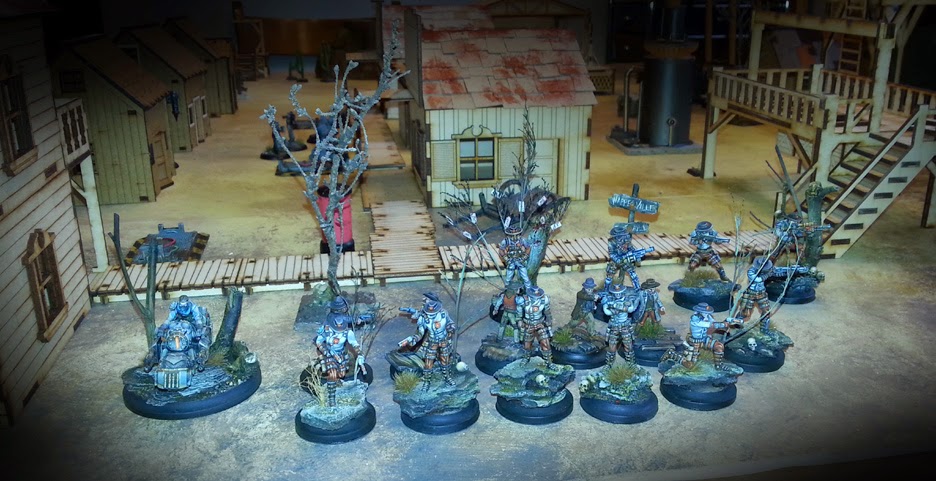 Here we see the new buildings from Burn In Designs, as well as the guard tower, the boardwalks, and more! 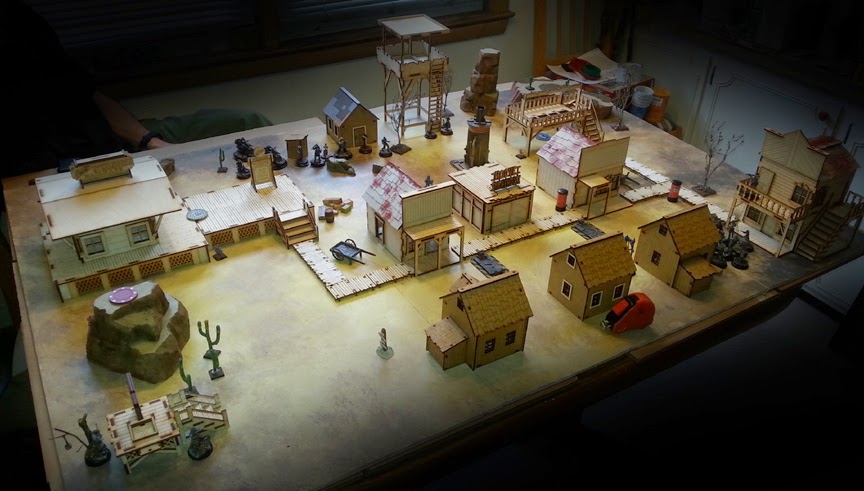 There were even more civilians running around.  In addition to the Preacher, his wife and their dog, we added The Prospector and Miss Holly, purveyor or Holly's House of Hospitality. 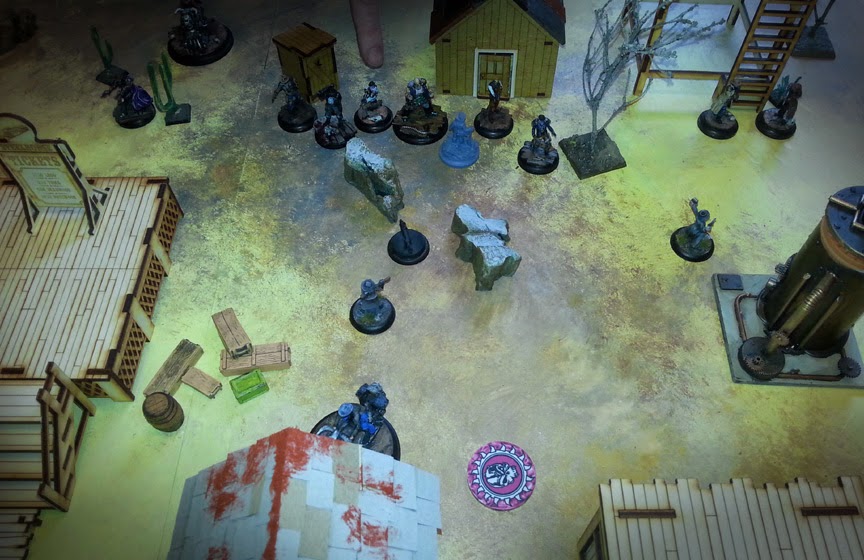 This time, I wanted to make more efficient use of Gang Actions with the hired hands.  The idea was to start out as a mob of ten, and then break into two groups of five.  If you stay within 2 inches of each other, you can still take those group actions. 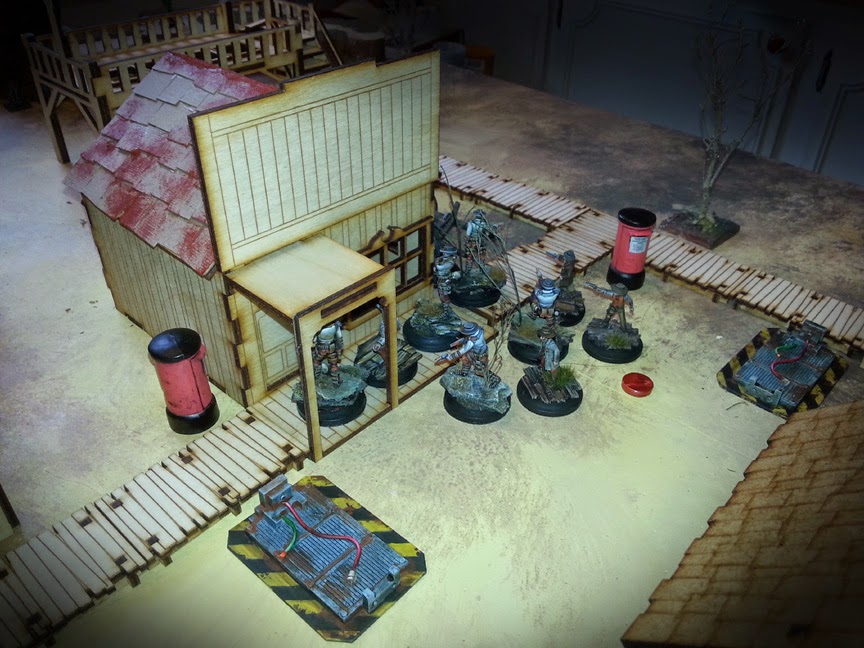 The Outlaws, being quite popular among the citizenry, have to deal with getting around the townsfolk rushing towards them. 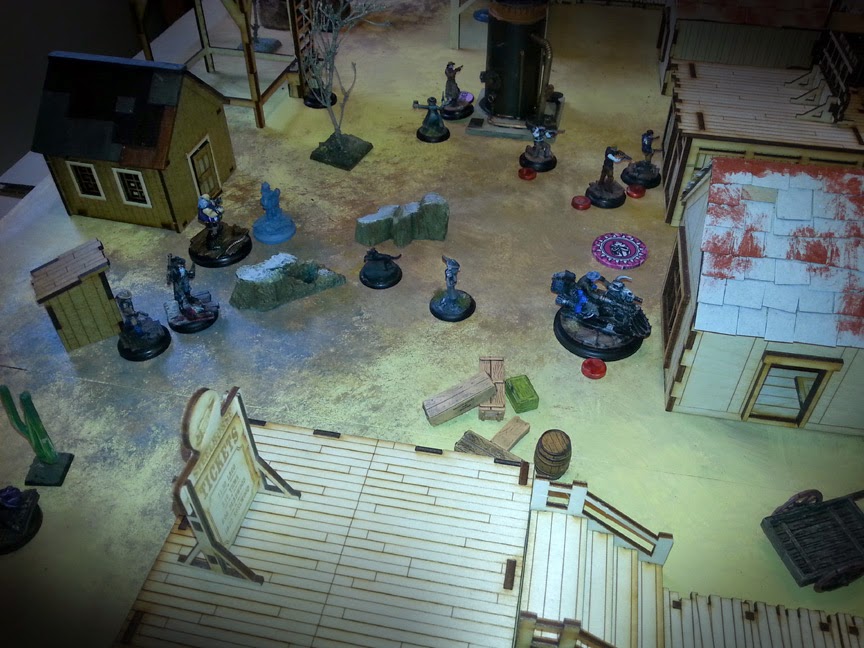 The Lawmen prepare to disperse... one group towards the Primary Gallows, and the other towards the center. 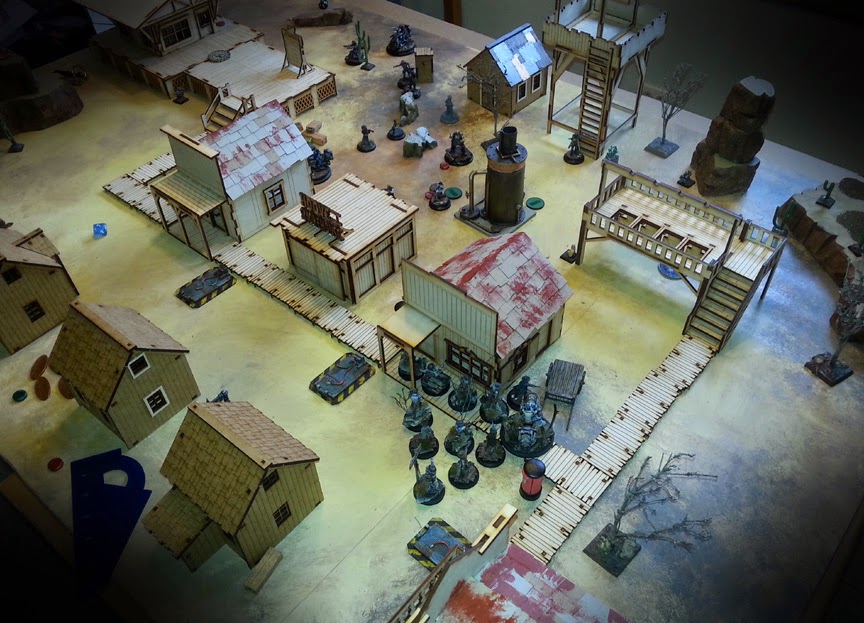 Boss Pat Garrett took up a position on the mesa, so that he could survey the entire train platform. 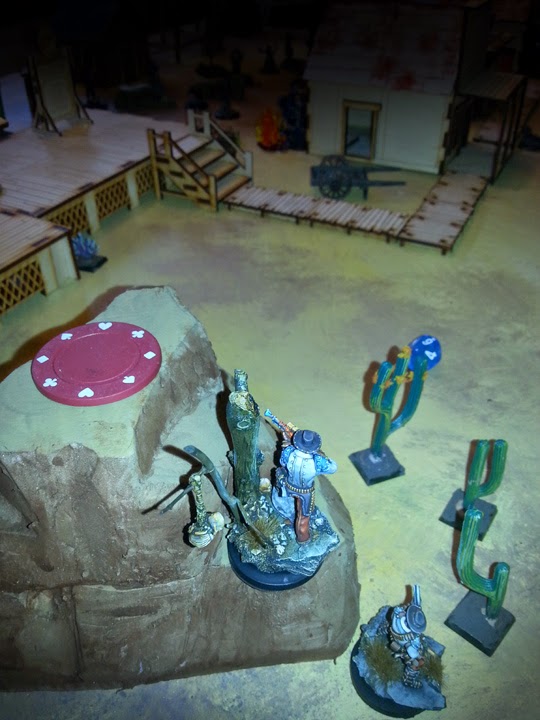 The Wraith was able to use his interference to cause Doc Holliday's blaster pistols to misfire.  So, Doc had to start tossing around playing cards... 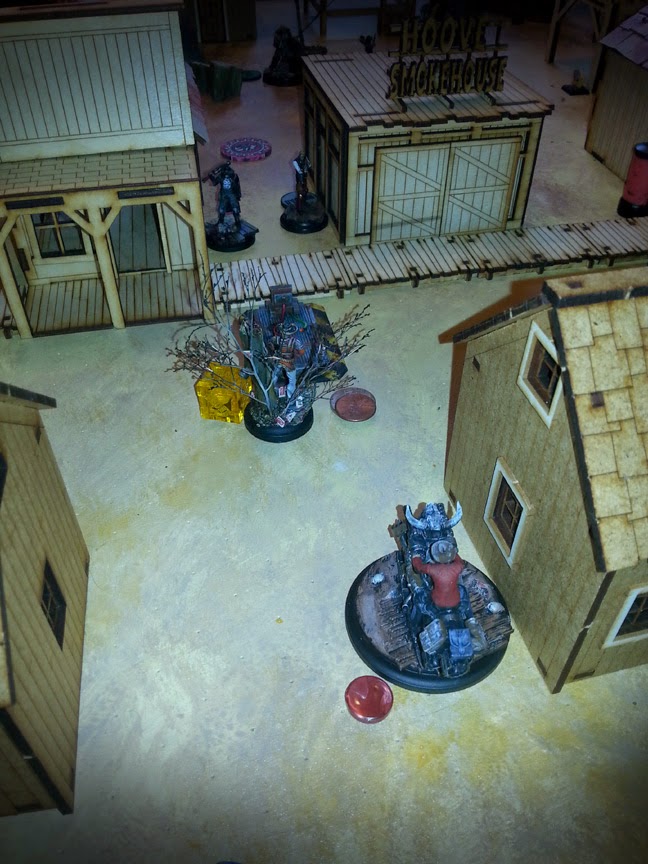 The Wraith was sacrificed to put more wounds on Doc, with the Iron Horse shooting at him from point blank range!  Could Doc survive, or would he need all of his nine lives? 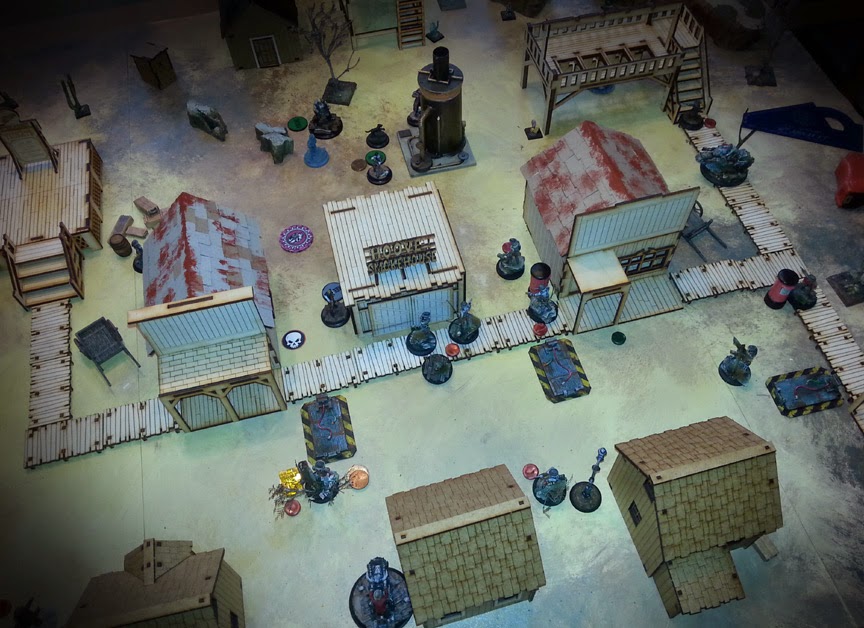 Lawmen advance towards the objective under the Gallows. 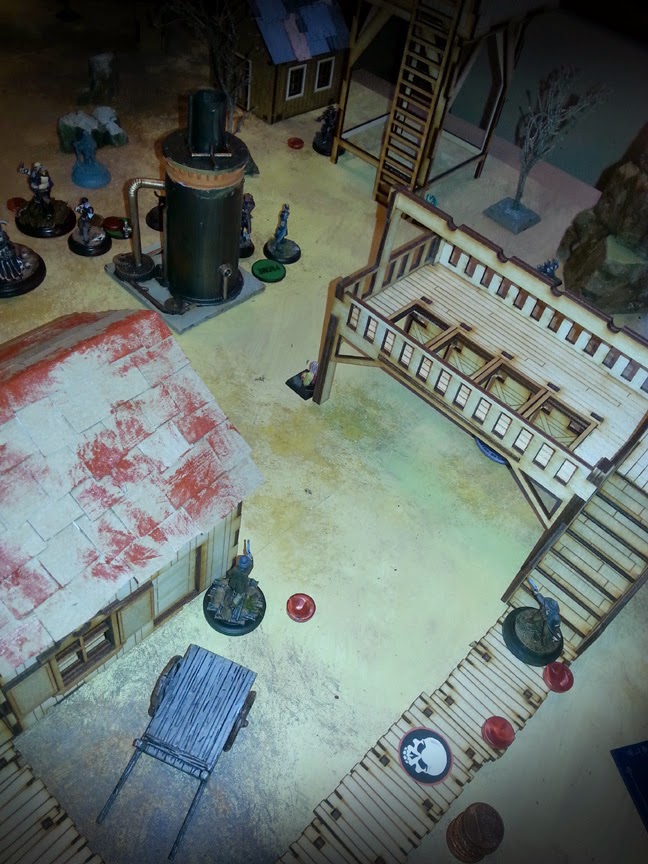 Those hired hands continue to press the Outlaws, keeping them away from the main shopping district of Wappelville.  They decided to charge the Outlaws and take advantage of Close Work and the 2 inch combat halos! 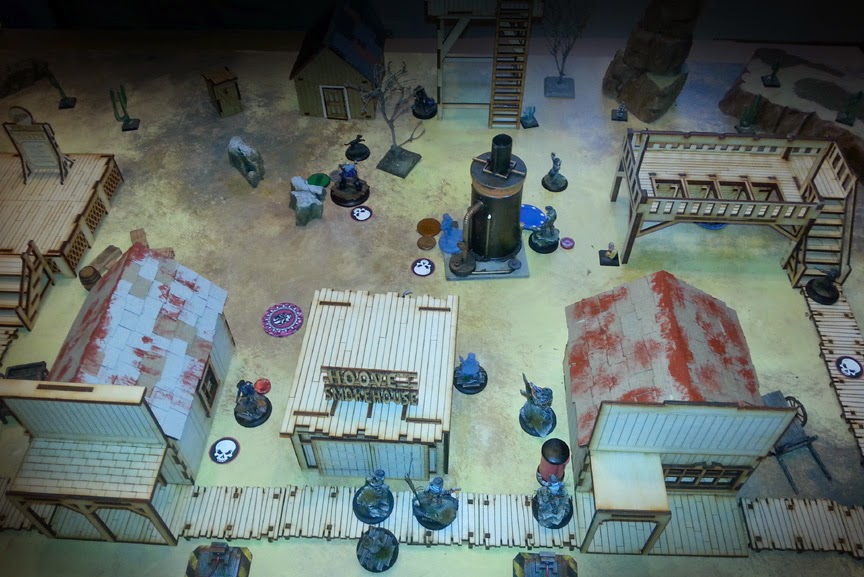 For the first time in any of our games, light support vehicles came under constant assault by hired hands.  It would prove far more deadly than shooting at them! 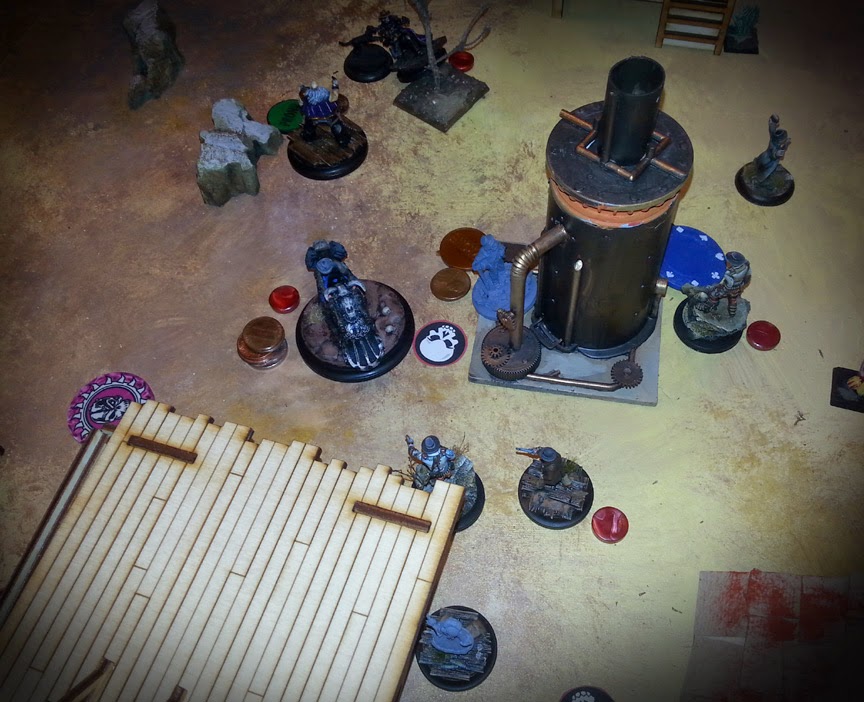 Doc Holliday must have used up all of his nine lives, as he was dropped in place by an Outlaw hired hand who was determined to get to the General Store.

This did allow the Lawmen hired hands many opportunities to put a pistol or two to the head of an Outlaw.  The streets began to run red with blood. 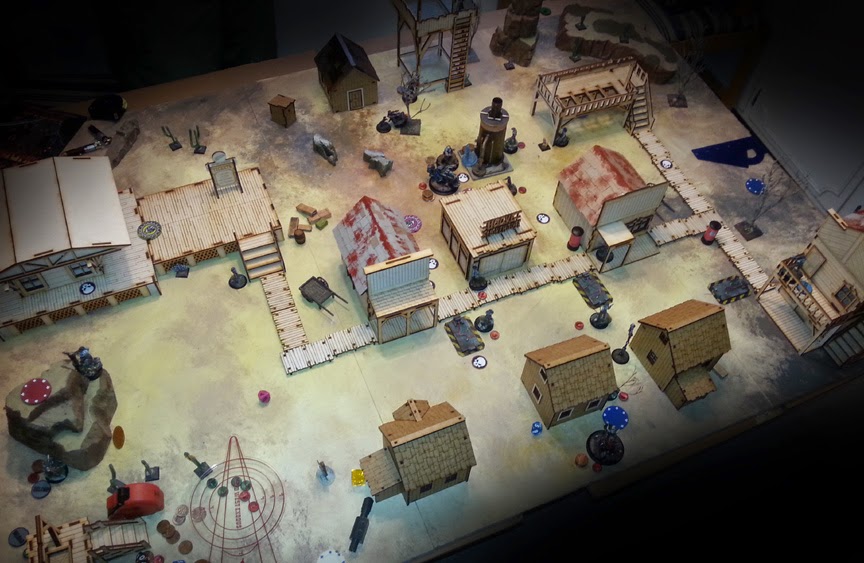 The Preacher, so horrified at the violence which continued to plague the streets of Wappelville, decided to go in search of a more peaceful flock... 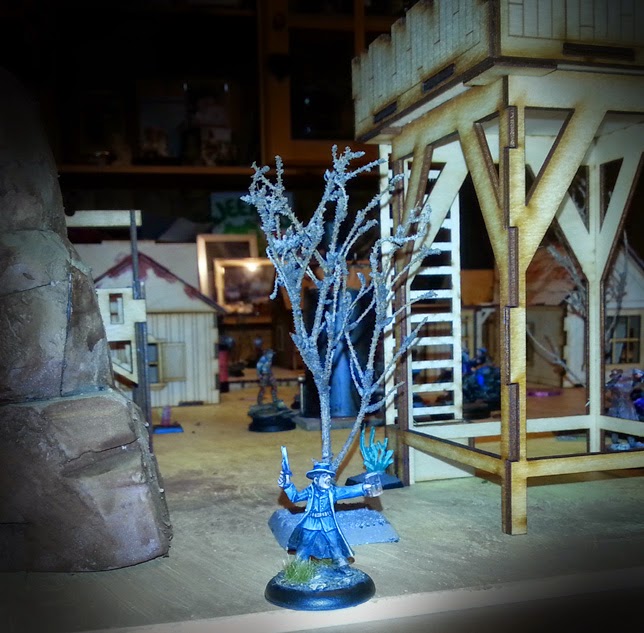 Bloody Lane.  The body count rises!  You could already hear the hammering of nails on pine boxes... 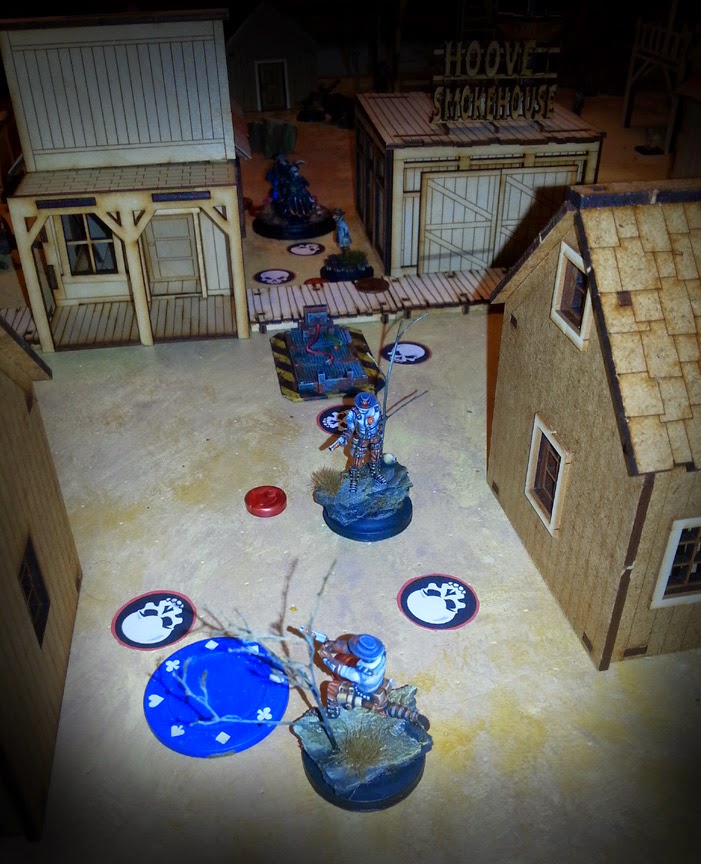 Carpathian will be very interested in the Wappelville Cemetery, I think.  Bodies fell in droves, especially when Jessie decided to come out of hiding and blast away. 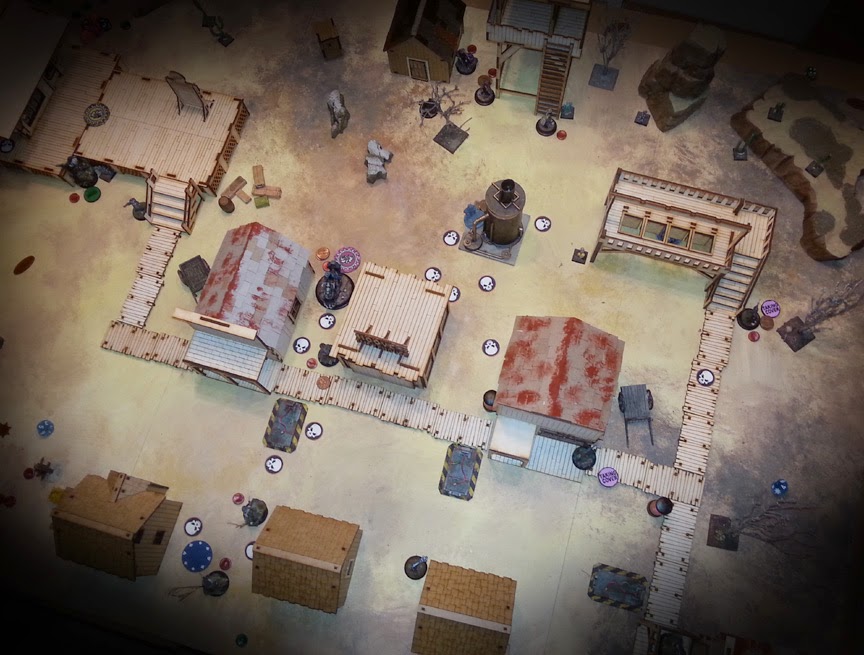 Ultimately, the Lawmen would prevail, and the citizens of Wappelville would remain under the iron fist of the LAW!

It was nice to hash out the close combat rules, which now makes these basic lads far more viable.  That means even more bloodshed to come, so stay tuned! 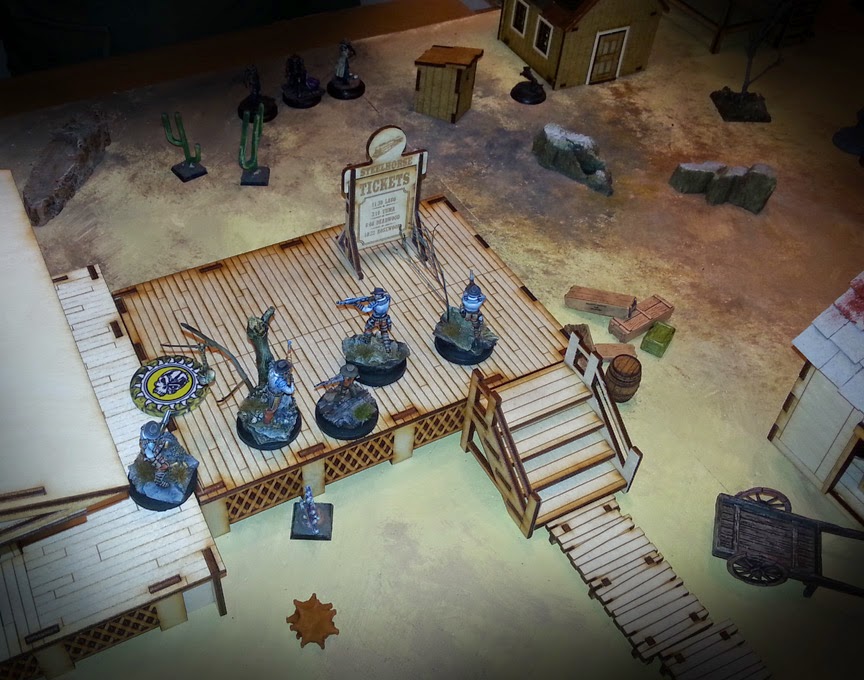 Posted by wappellious at 1:01 PM 4 comments:

Bearing down on Mierce minis 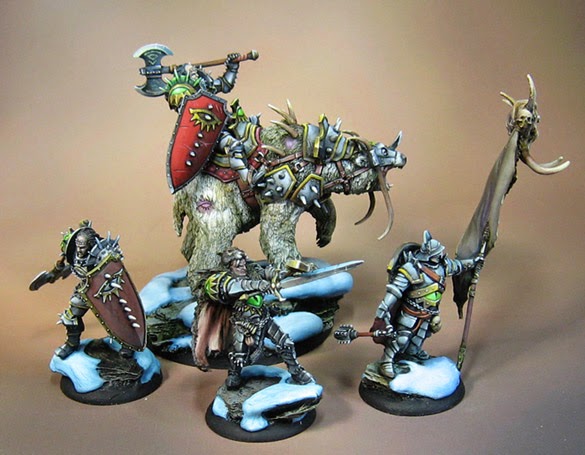 A few fun group shots for you today. 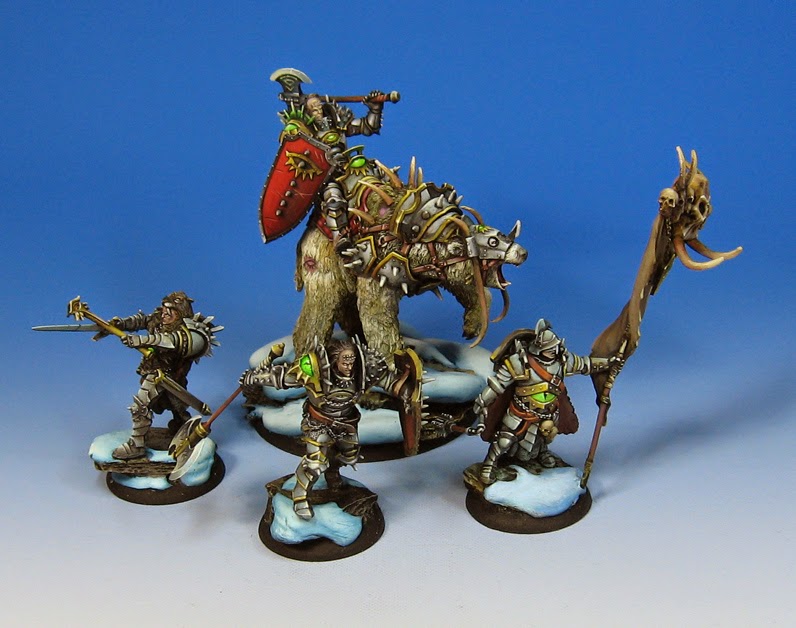 I had been looking forward to seeing this batch of Mierce minis all together! 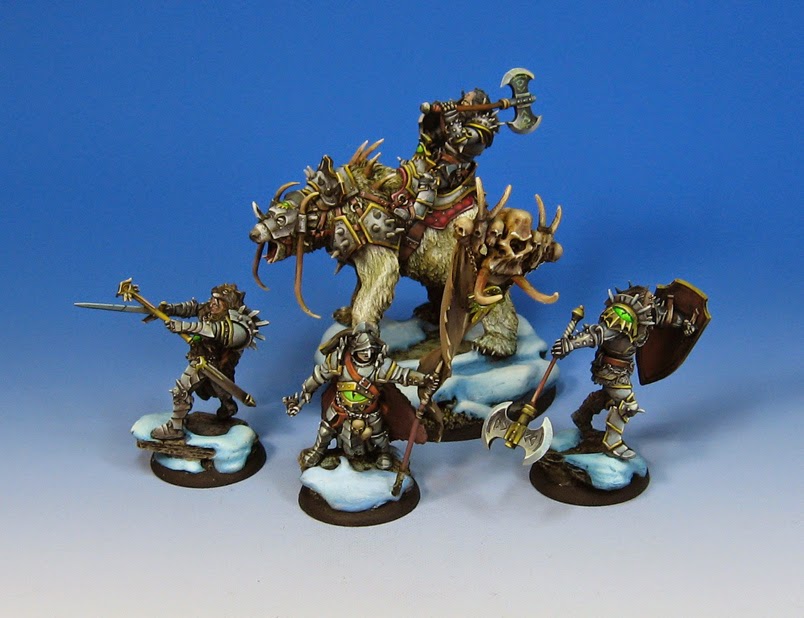 I also wanted to see how the colors would appear with this version of the Hangar 18 backdrops. 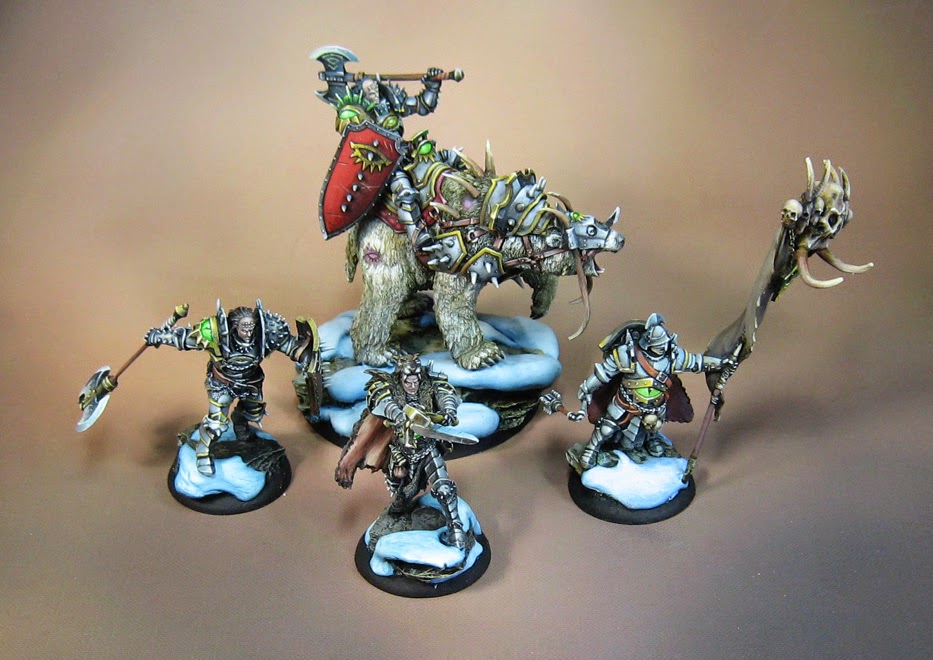 With all the cooler colors, I figured that this warmer colored backdrop would yield some interesting results. 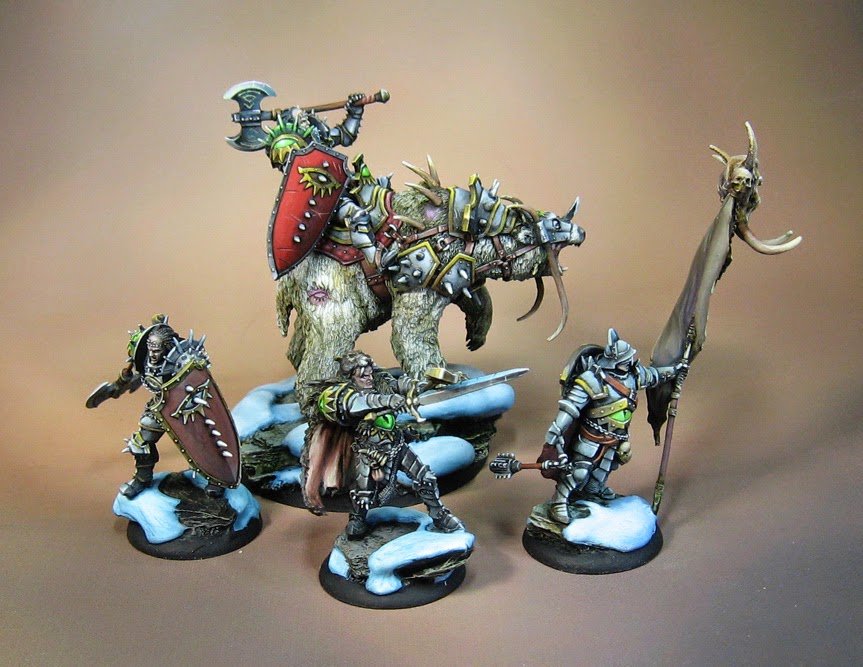 Balor definitely has his eye on this group! 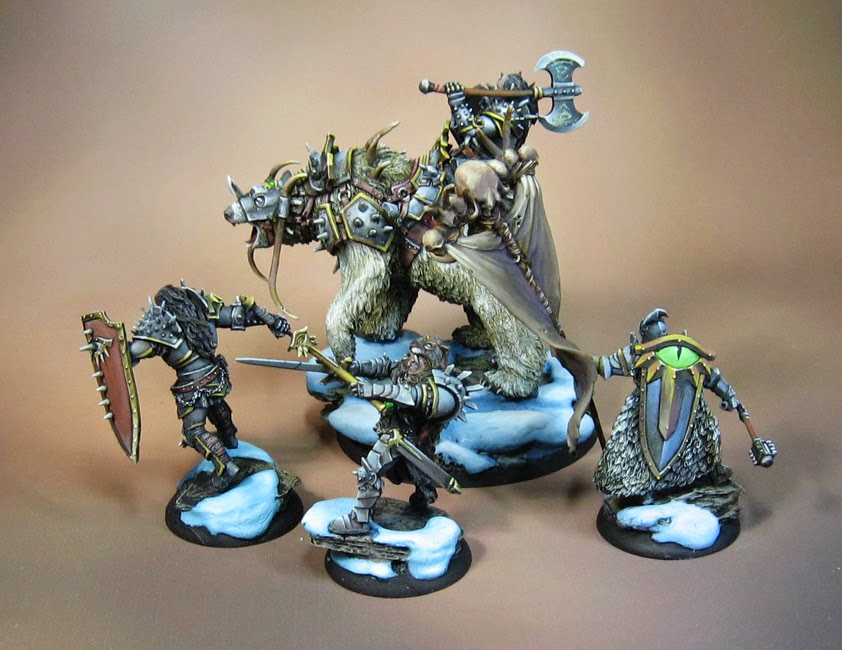