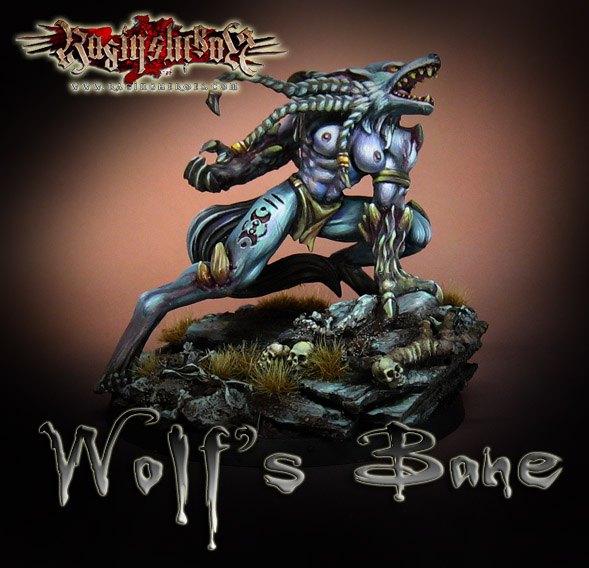 Here's the first of the incredible new Wereshewolf figures from Raging Heroes!  They are very dynamic, obviously, and more than a match for most critters on the table :-)

This one is on a 60mm base, for scale reference.

I added my usual bark and branch to the base, incorporating the rock which is under the left hand.

I wanted to create a moonlight kind of atmosphere, carrying many of the same blueish gray tones from the base into the figure as well.  To add a little color interest, I worked in some pink and purple colors into this blue/gray/teal mix.

Some of the tans and sienna colors were also mirrored on the base, by painting in some reddish mud colors between the rocks, and the color of the grass tufts.

The long sleek lines are really nice to paint, as I could use the larger #8 rounds nearly the entire time, following along the flow of the tail, etc.

I thought that taking some pictures on a different color backdrop would be a good way to show these tones, as they won't blend into the background as much.  It also tones down the warmer colors, so the blues stand out even more!

The wereshewolves are available on the Raging Heroes webstore, along with dozens of other amazing fantasy and sci-fi figures!

Posted by wappellious at 1:41 PM 2 comments: