Using the Shaded Basecoat on a converted Vostroyan 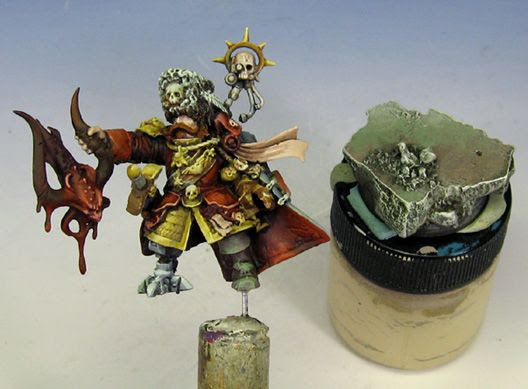 This set of images illsutrates me using the "shaded basecoat" technique on an Imperial Guard conversion.

First, the conversion itself...

And now to stage one of the painting.  This is the same process of starting out with a middle tone and working much lighter, in order to set up my darker glazes and shading.  The colors were very basic.  Since the darker shading allows me to tint them to any shade I require, there is not as much need to worry to use the "right" color from the start. 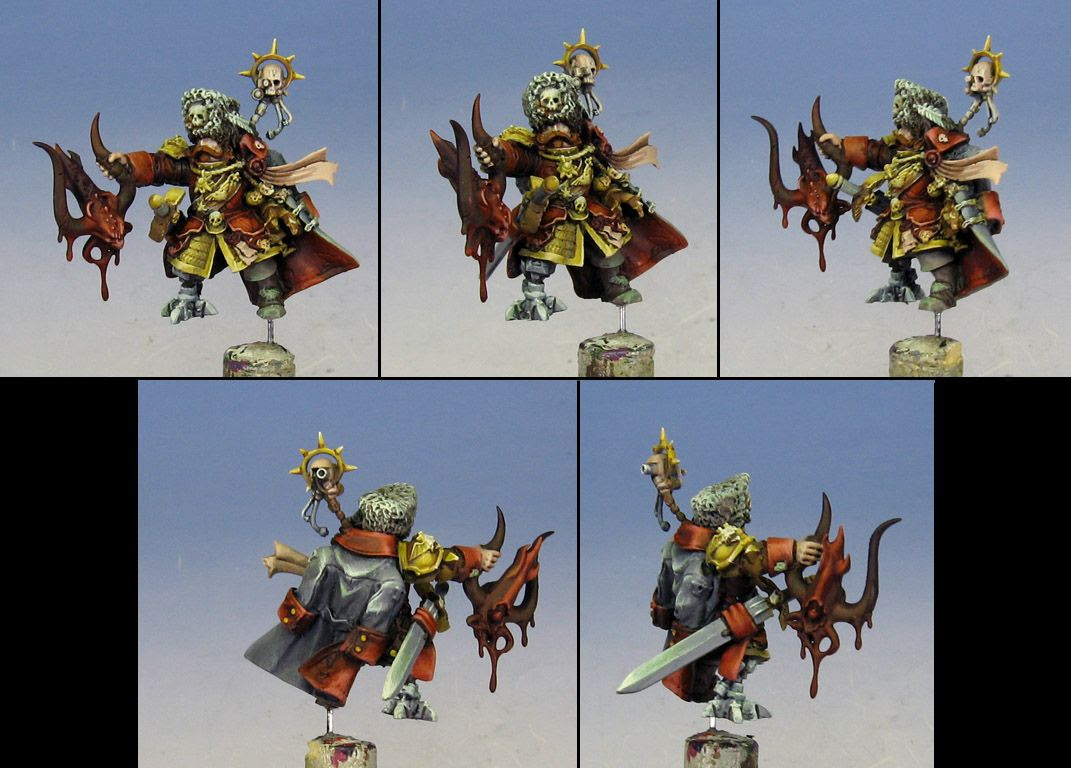 Here is the base, made with baked sculpey clay:

Once those lighter colors had been established, it was time to get to the glazing!  You can see the big difference in the darks, and the introduction of the blues and purples here and there... 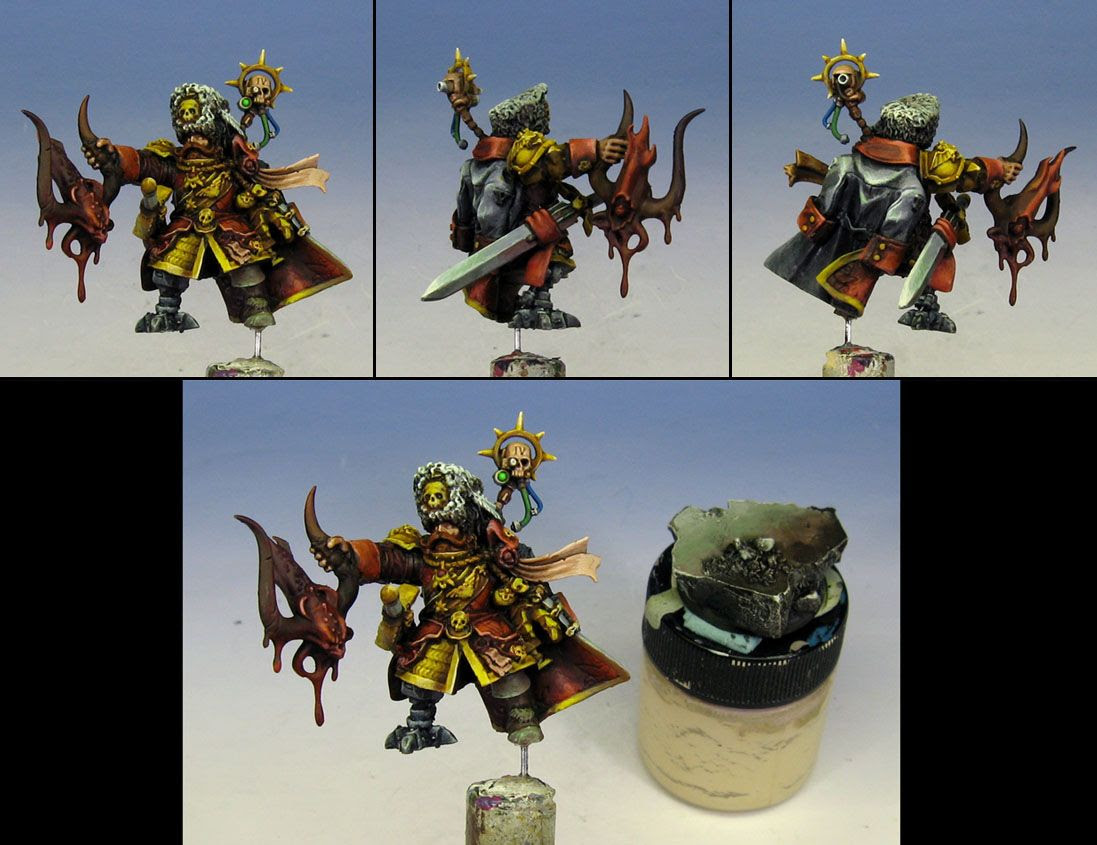 Tomorrow I will be posting the finished images of this piece.
Posted by wappellious at 8:22 PM No comments:

A very different Dreadnought close combat weapn (at least for me) 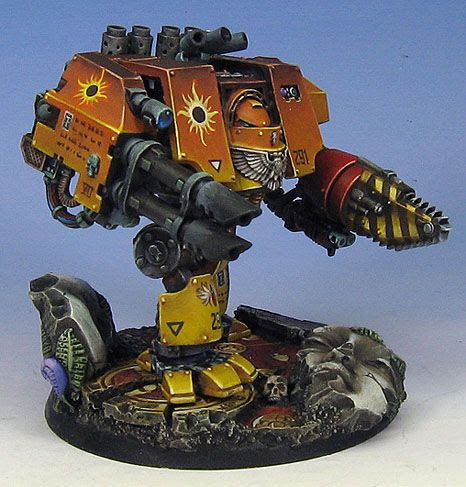 Here's another Angels Solaris Dreadnought.  This one had a close combat weapon.  It was not like any other CCW I have painted, so that was fun!

Since every one of the Angels Solaris dreadnoughts was so different from each other, it made figuring out where the color transitions should go a bit of a challenge! 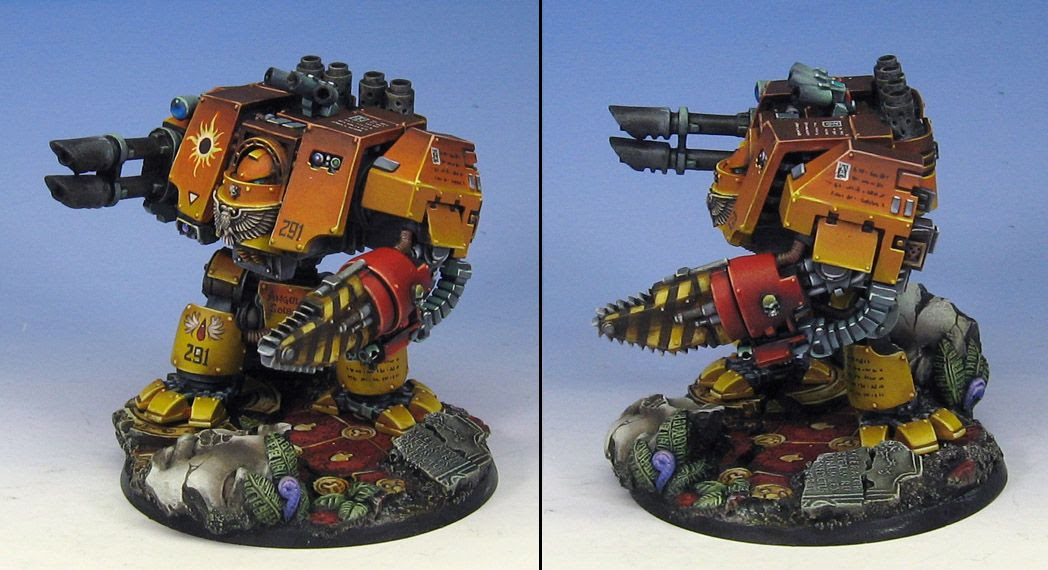 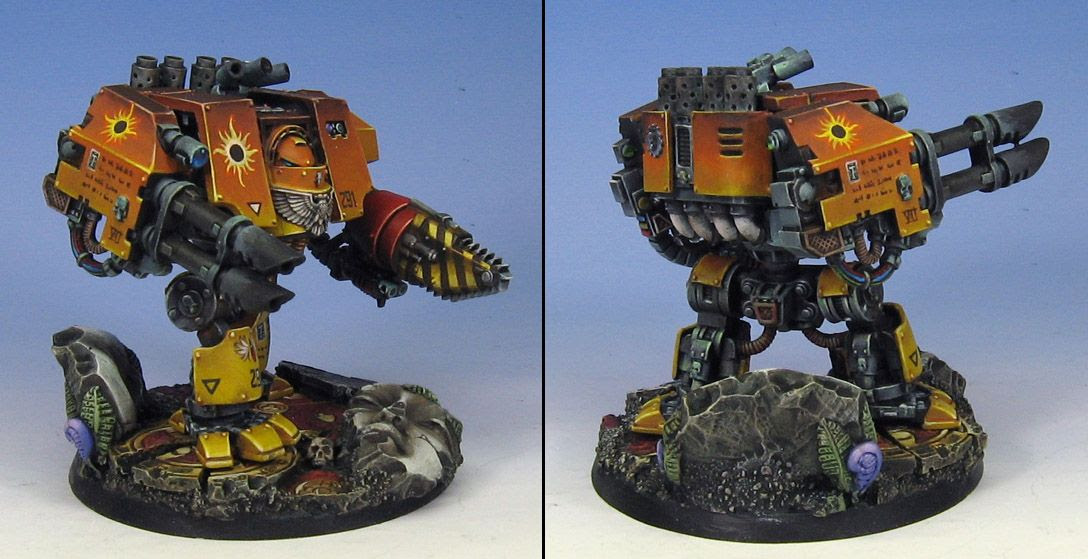 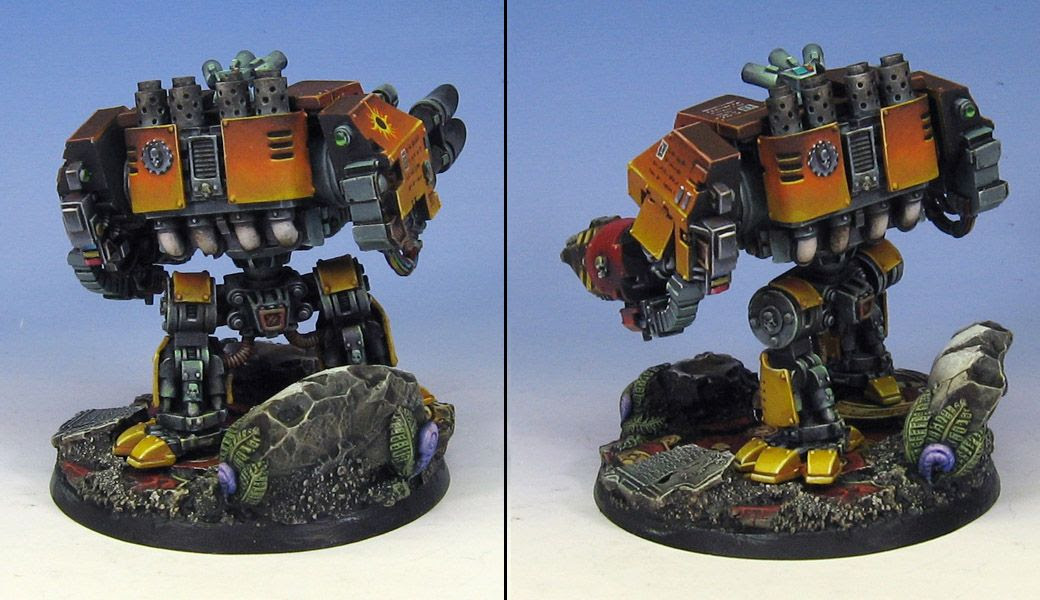 The most difficult aspect of the Half Dozen dreadnoughts for this chapter was making the weapon arms "transferable" across plastic and Forgeworld.  I had to do some fancy magnetizing .:-) 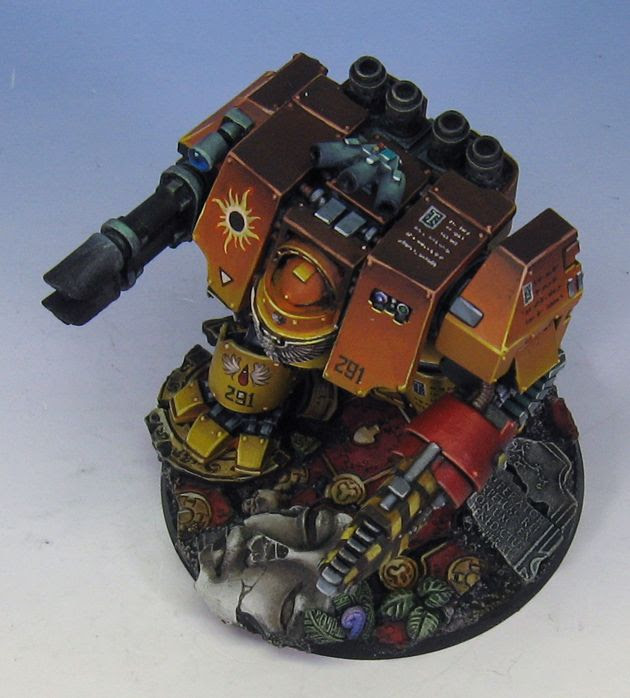 Posted by wappellious at 1:10 PM 5 comments: 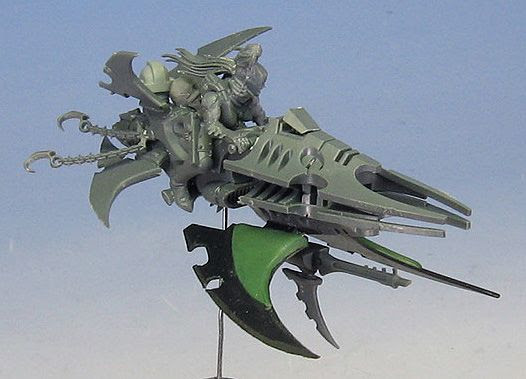 I have been working all along on my Adepticon Dark Eldar army, mostly assembling basic stuff, getting used to how those minis go together, etc.  I had not done much converting, with the exception of some Kabalite warriors.

However, at this point my list has no warriors at all (subject to change, of course!).  It does have a lot of Reaver Jetbikes.  A large batch of them was kindly donated to the Cause by Jon (thanks!), and I struggled to figure out how many I should include, since they seemed to offer the best chance for unique fluff.

More on that in a later posting. 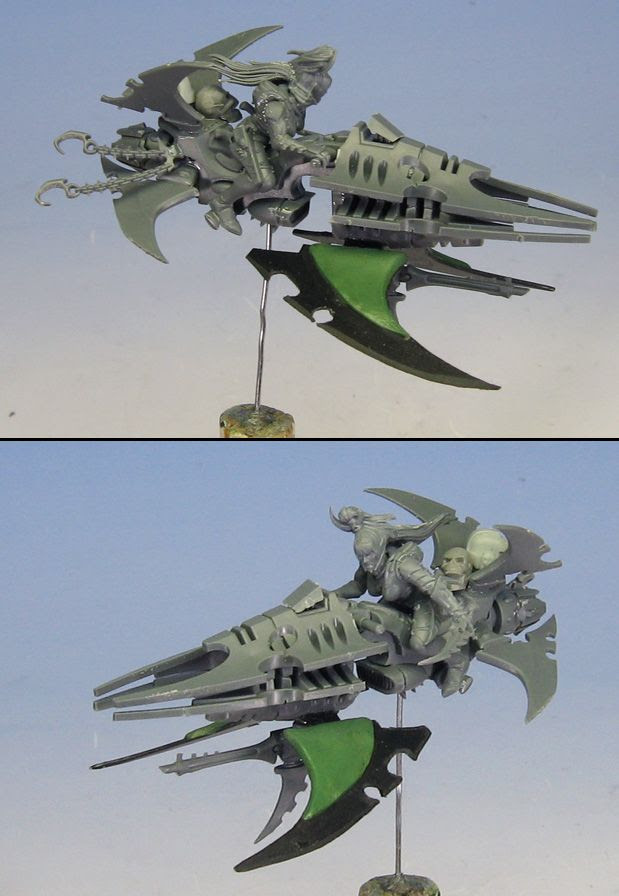 Prior to 6th edition, I had not heard encouraging things about large quantities of jetbikes in a tournament... or at all.  However, once I got a chance to see what fast, flying, shooty, slicey, dicey things might do in this new edition, things started looking up, as you might say. :-)  Besides, fast attack units will likely be scoring in one game of a tournament. 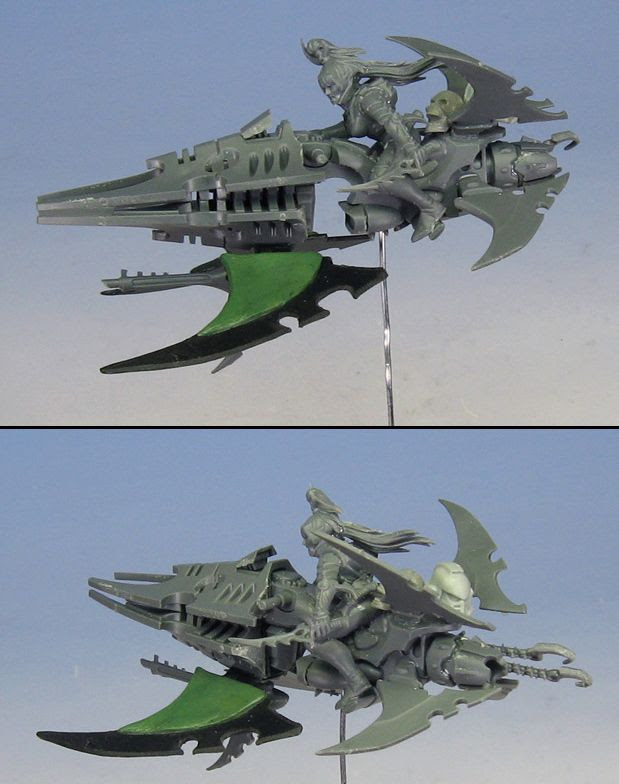 I now have 2 large units of these under way.  From a practical standpoint, I need to have some of the bikes look very different from each other.  Now that you take casualties from specific directions, it is very important to know which one is which.  Since I wanted to do all sorts of conversions to them, it was the perfect storm! 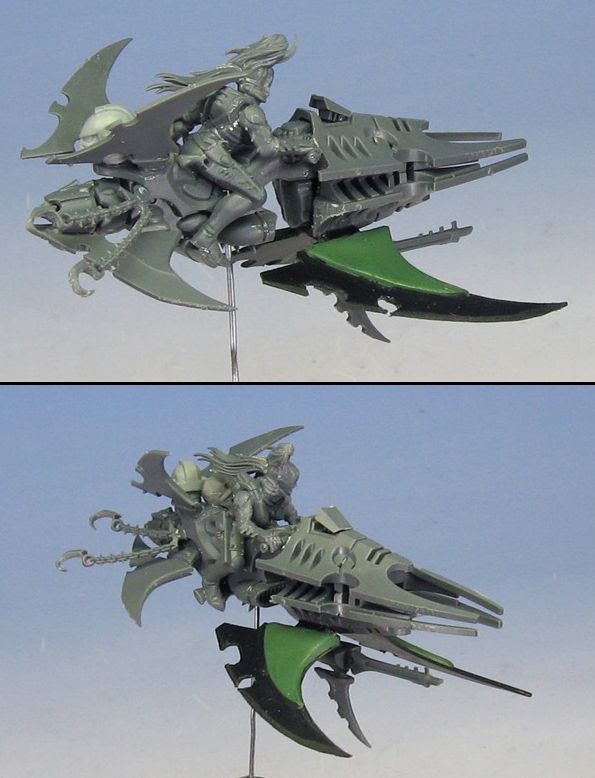 As you can see in this test figure, I added a few regular wings to the aft of the bike, as well as a few trophies and bits.  On the ventral side, I added a duplicate cowling to the one on the dorsal side (there are extras of these in every set). 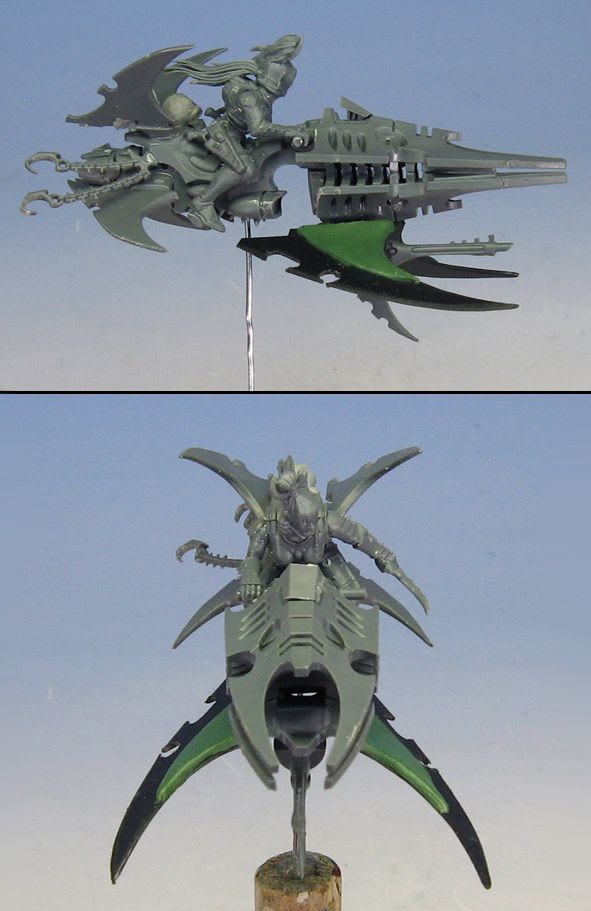 The splinter rifle is magnetized so that I can switch that out.  I will be doing the same thing with the cluster caltrops and grav talons.  I really look forward to painting this guy!  I am also looking forward to chopping up lots of space marine squads! 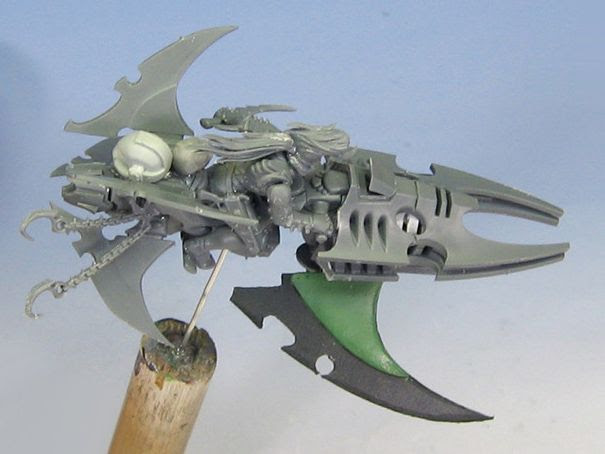 Posted by wappellious at 4:28 AM 4 comments: