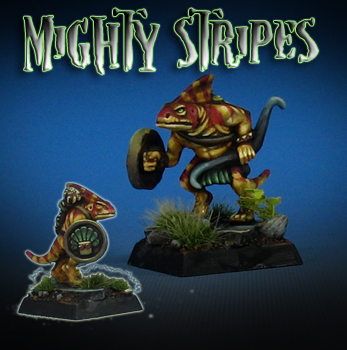 This pattern of markings was an experiment for the Skink and Kroxigor unit that never was!  I loved my Skrox units, as I called them (they were also referred to as the Foot Cavalry).

I liked the idea of the stripey Skinks, but the pattern proved to be too pesky to translate to the various types of Skink figures that would be in the unit, as well as the Kroxigors.

At that time, only the old metal Kroxigors were available, and this pattern didn't work very well on those sculpts.  The amount of thick heavy scales and spikey bits made it quite impractical!

There were a number of these older Skink archers that were given sculpted shields, like this fellow!

Here's a little peek at what my Skink and Kroxigor units looked like: