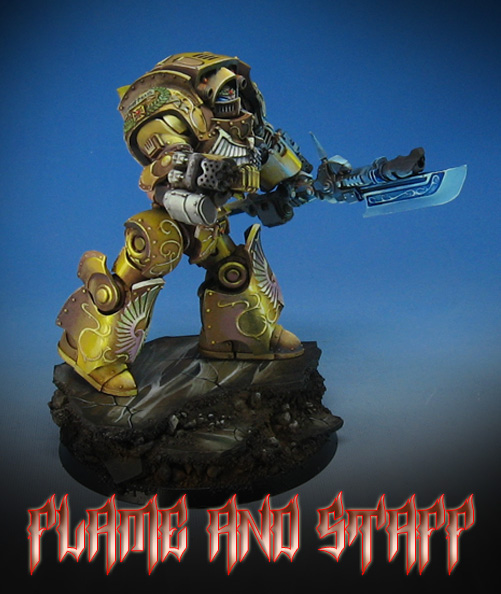 Continuing the experiments that I have been conducting with the Badger Airbrush Ghost tints, I tried to see how well I could take advantage of tinting my "primer painting" technique.

With so many organic surfaces to deal with, the ability to "map out" those areas of lights and darks with the various primer colors (Stynlrez, by the way) was huge.  As those were in place, I could use that framework to apply the various glazes of Secret Weapon weathering paints and Reaper Clear paints.

If you isolate small sections of the arms, legs, etc., you will notice 3 different transition types.  The obvious one is lighter or darker, but the key variations are in color temperature and saturation.

That is, some of the 'yellow' is either rust colored, purple or even green!  This is done to show how reflective that gold is, and also to maintain enough visual interest across a complex maze of textures and shapes.

The blue force weapon was chosen to match stuff that was painted many years ago, but also to give me a chance to incorporate more greens into the gold, as the blues tinted it, etc.  I tried to strategically place areas of rust color next to bright zones of white/yellow that was cool by comparison in terms of temperature.

Unlike the red base of the other dreadnought, this one did not offer that same kind of reflection possibilities.  So, the colors of the dreadnought were made a little more saturated and warm, so that the cooler, duller reflections of the grayish floor would have something to contrast against.

I look forward to trying this kind of effect in oil paints, which I will do on a facebook live session.  Stay tuned!!