Above the watchtower, the Sisters do some house hunting... 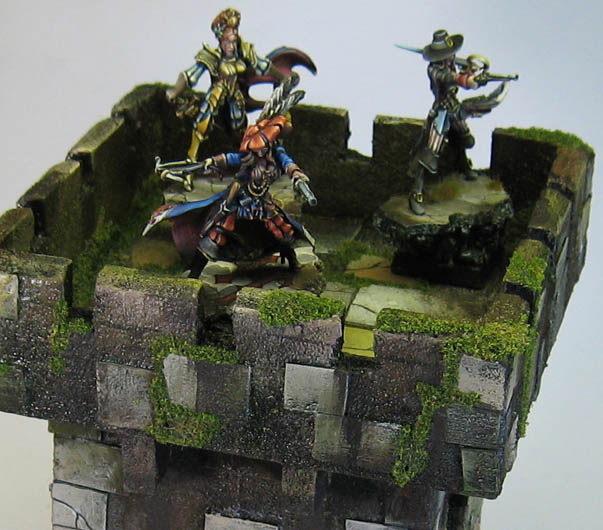 I've got some views of the platform level of the watchtower.

This part really benefitted from the flock, as it helped to create an extra sense of texture.  It also let me create the appearance of cracks and gaps between stones that were never there to begin with. :-) 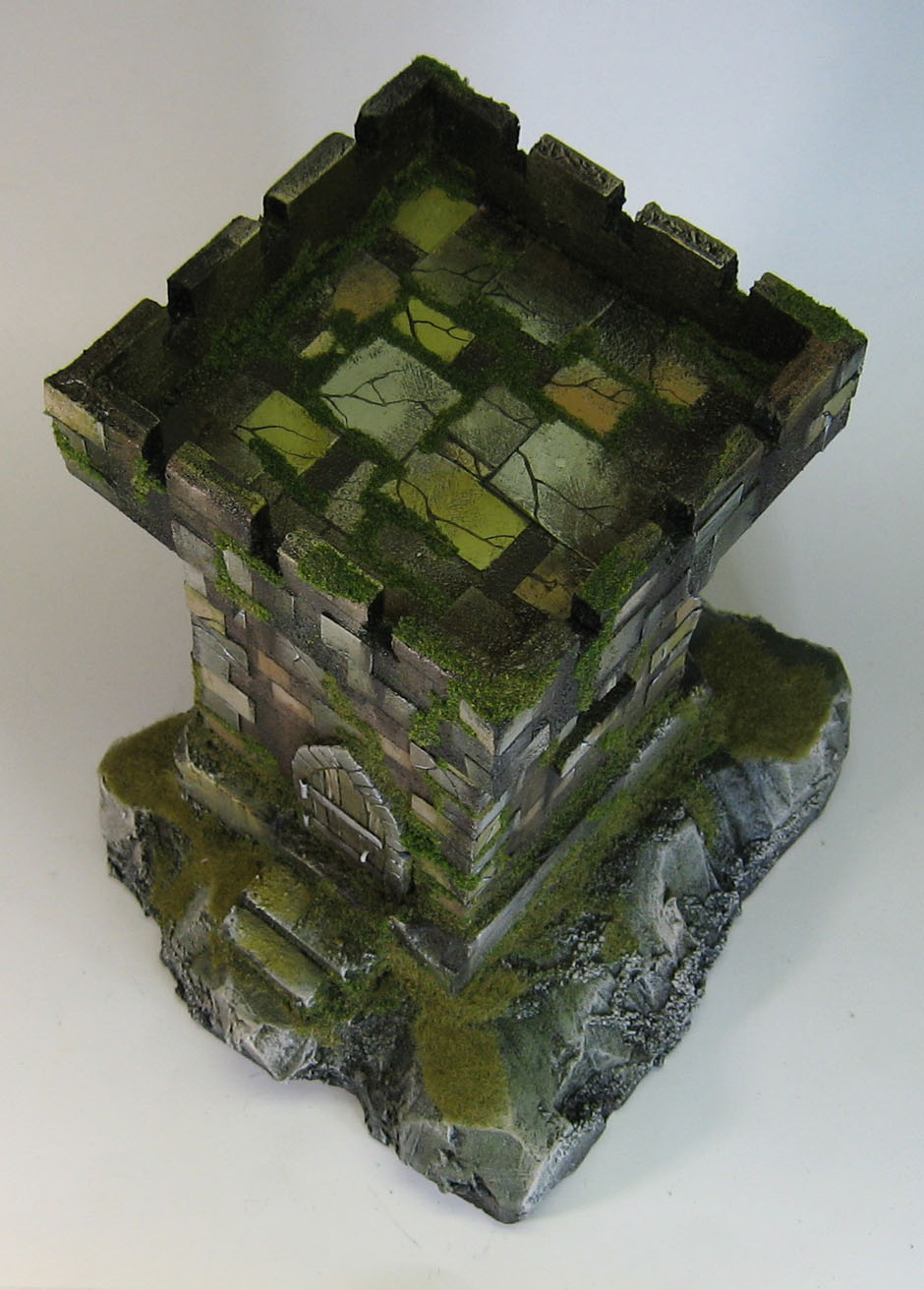 It was also important to have as much of the mossy stuff as possible on this level, being so exposed to the elements.  Just as with the rest of the tower, it also gave me a bit of extra color.

If this were for my own gaming table, I would have used my magnetic paint so that my figures would really stick to the upper level.  I do this with all of my terrain, since all of my miniatures have magnetized bases! 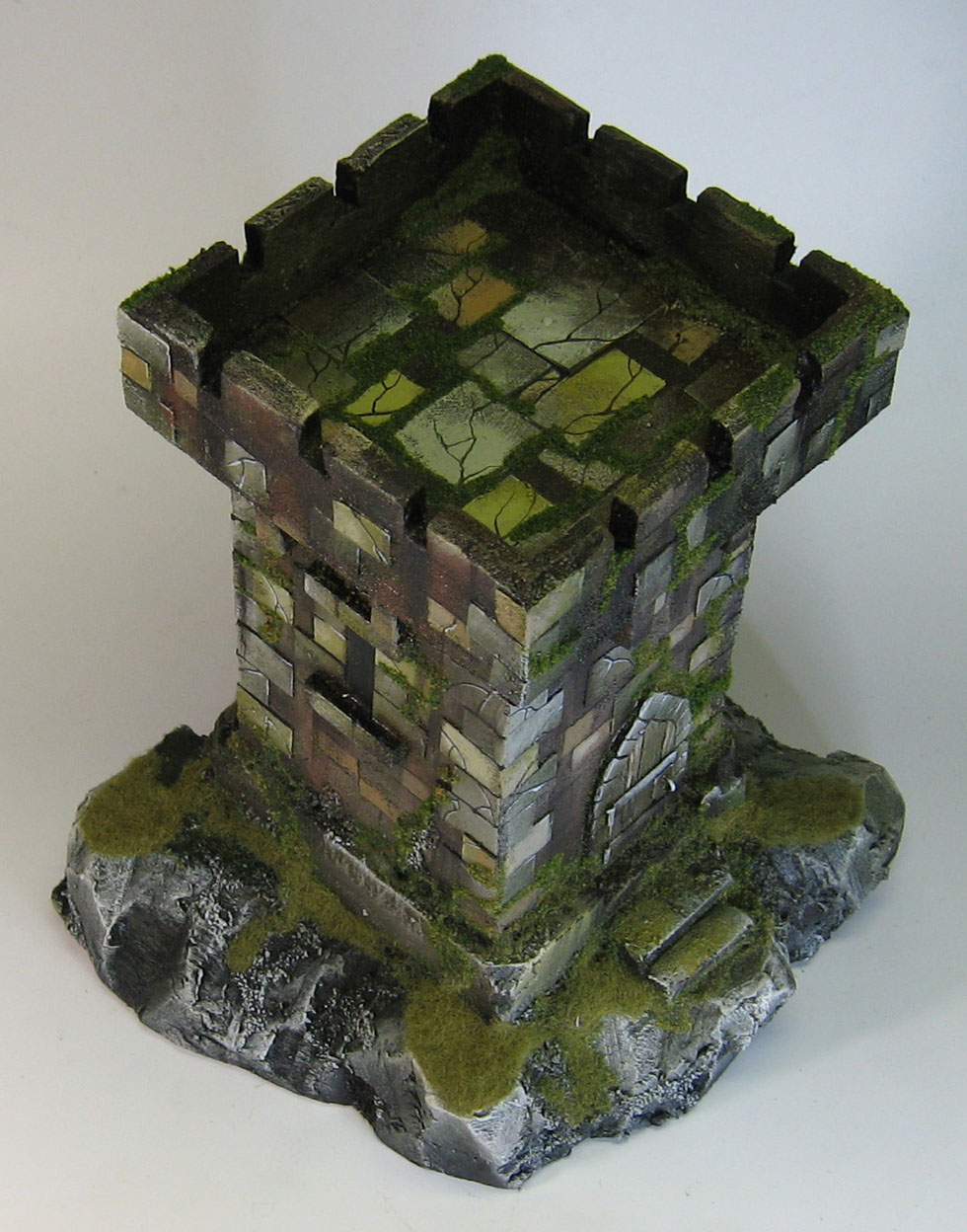 I put the Konigsberg Sisters on the upper level to see what it would look like with some minis on top! 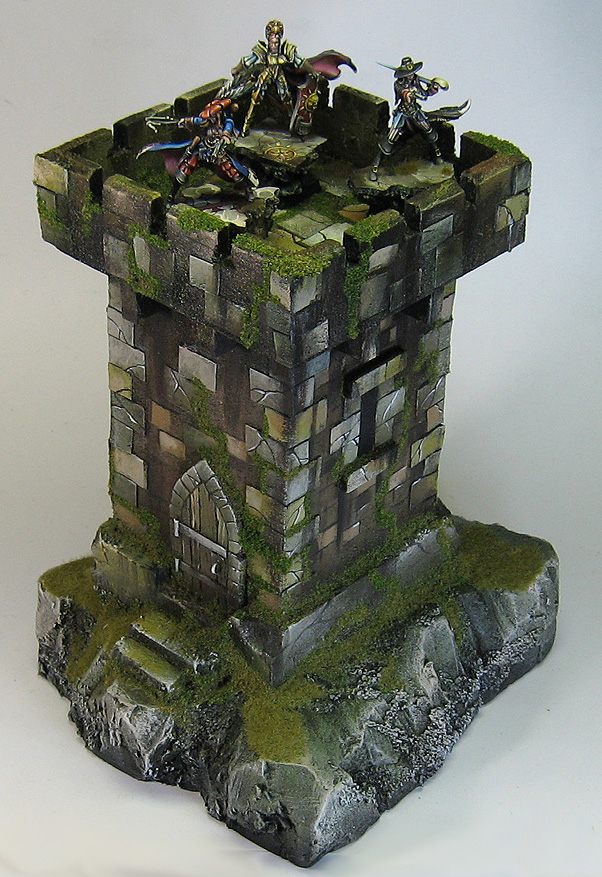 The bases were taller, so they stuck out above the parapet a little more than most minis would.  However, given the line of sight rules that are in just about every system, that means you won't be able to 'hide' attacking figures at the base of the tower, out of sight from the folks on the top platform. 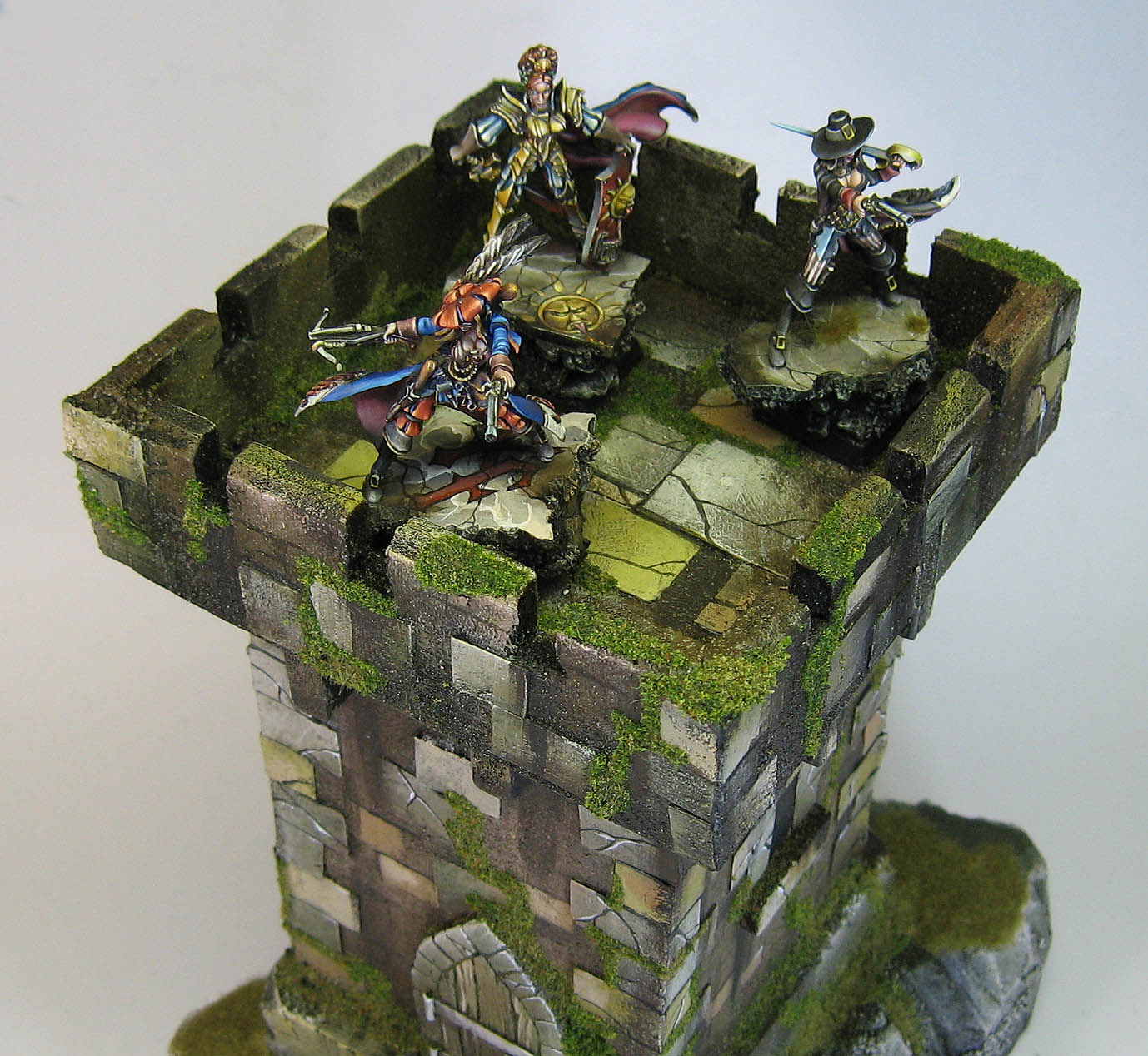 Posted by wappellious at 12:59 PM No comments: 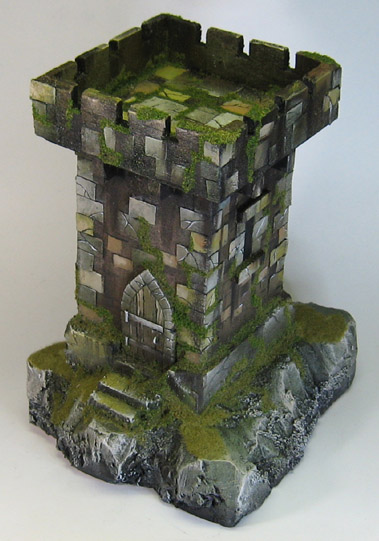 Well, it was a pretty crazy day with the snow and the shoveling, etc., but in between rounds of snow clearing, I did the painting and flocking of the watchtower!

The colors were very simple.  I stuck to the Liquitex acrylic paints, using a little bit of black, Titanium White, Sap Green and Cadmium Red.  I also added a bit of tan and a few other colors of regular miniature paint for some of the smaller details. 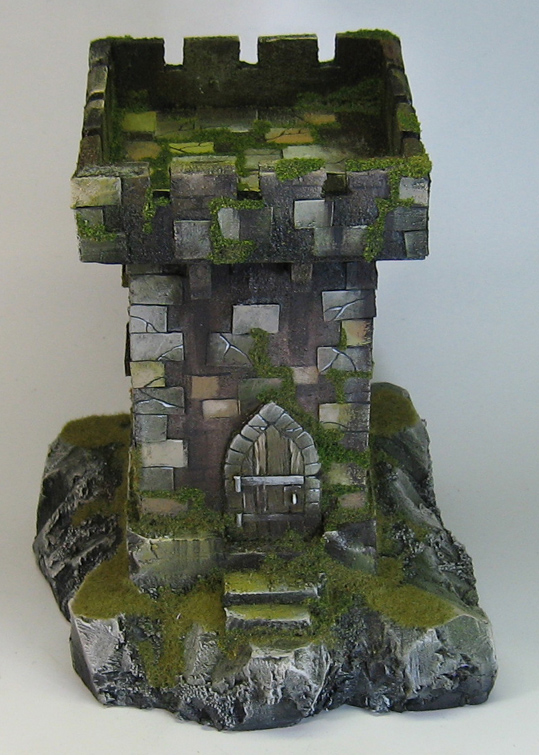 By mixing the Sap green and Cad red together, I got a nice brown.  I could vary the hue as needed (more green vs more red) whenever I wanted. 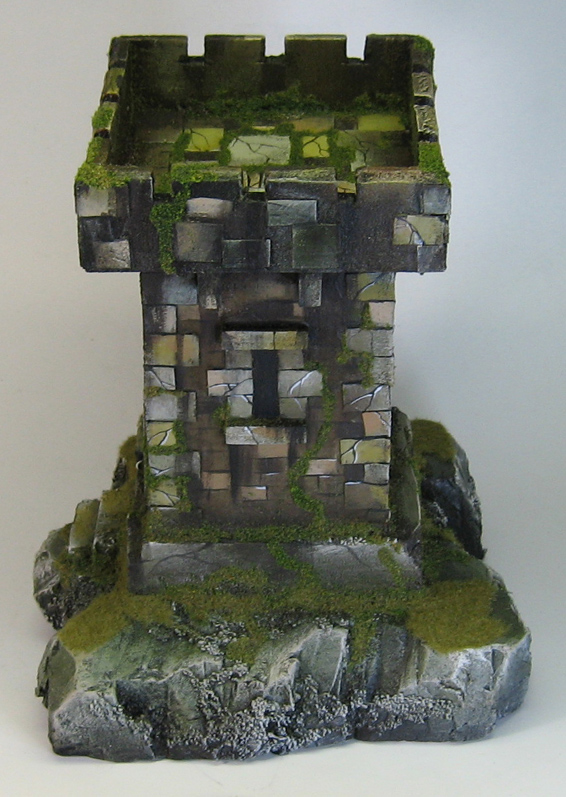 For instance, I knew I wanted the interior wall color to be a reddish brown, with the corner stones being lighter and cooler.  The reddish brown would be a nice contrast to the eventual flock and grass treatments. 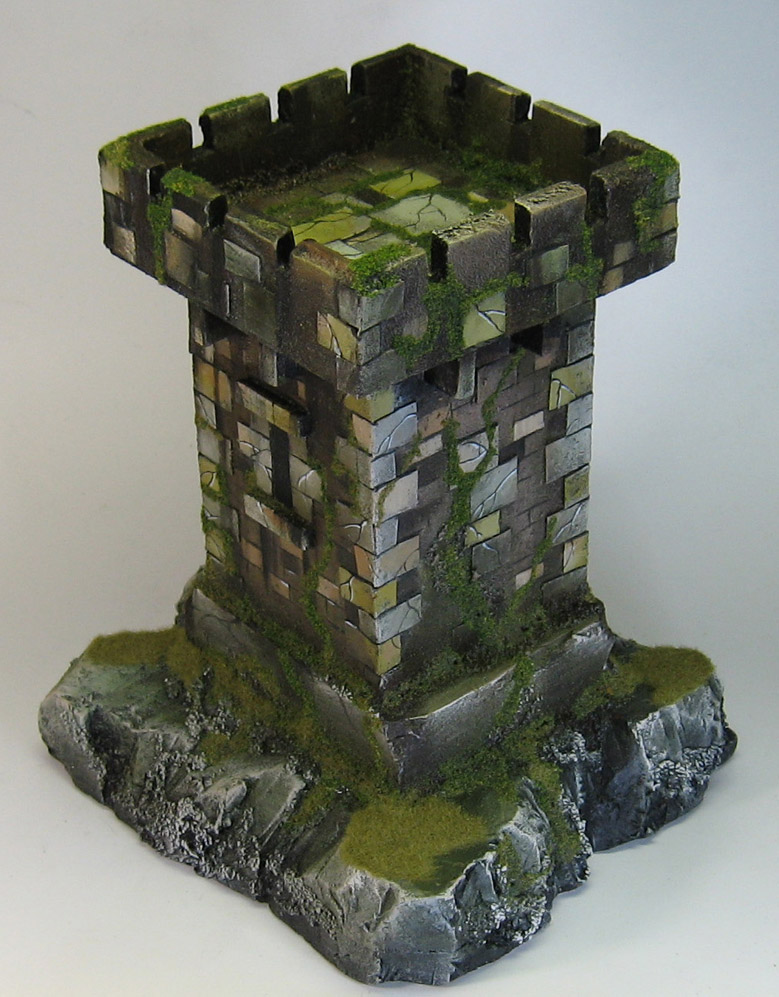 By mixing in some of the white into those color variations, I could make them more or less saturated. 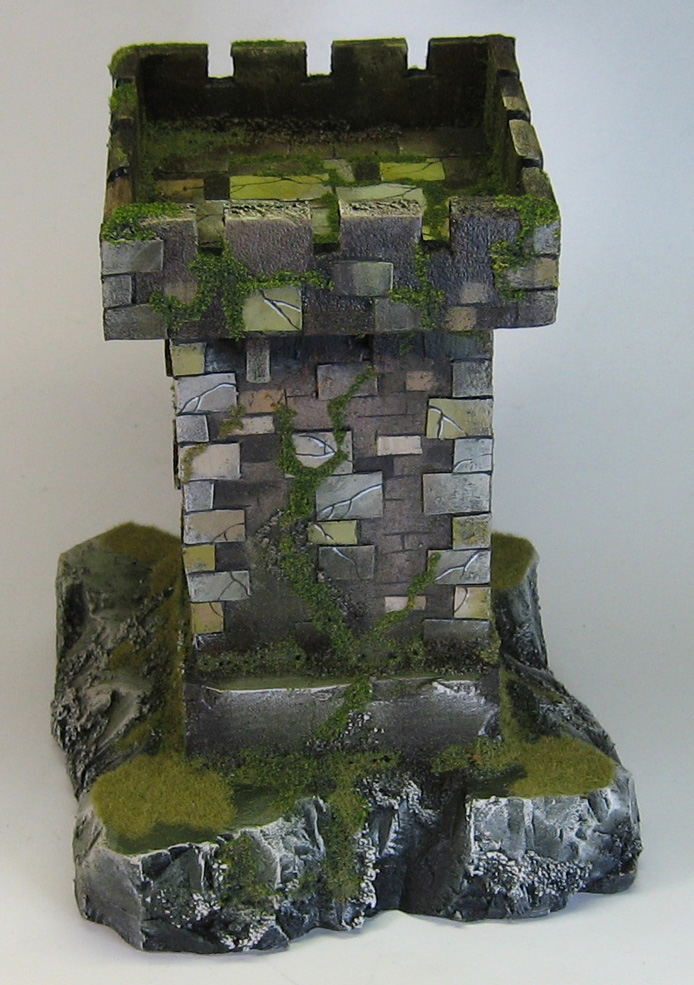 You can see that I painted in some cracks on the stones.  That was to save time, but still create a nice effect. 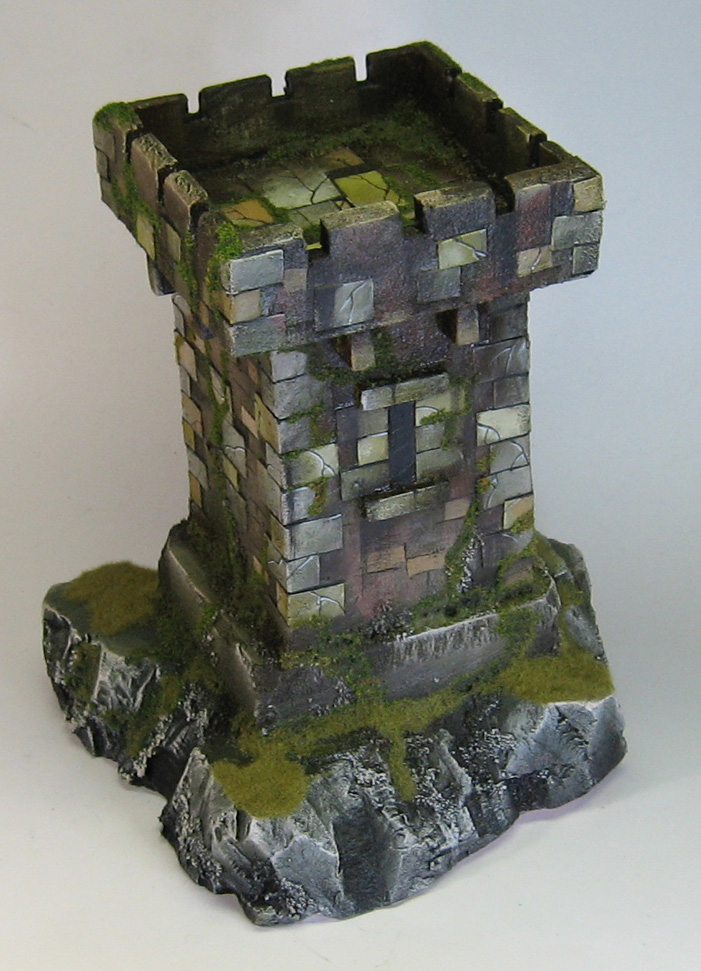 Once all the painting was done, it was time to put that flock and grass onto the tower!  I had a few colors of flock... a green, and a yellowish tan.  Those were placed in alternating patterns on the ground and along the walls.  That put a nice mossy texture on the stones, and added some great color contrast to the reddish browns of the walls! 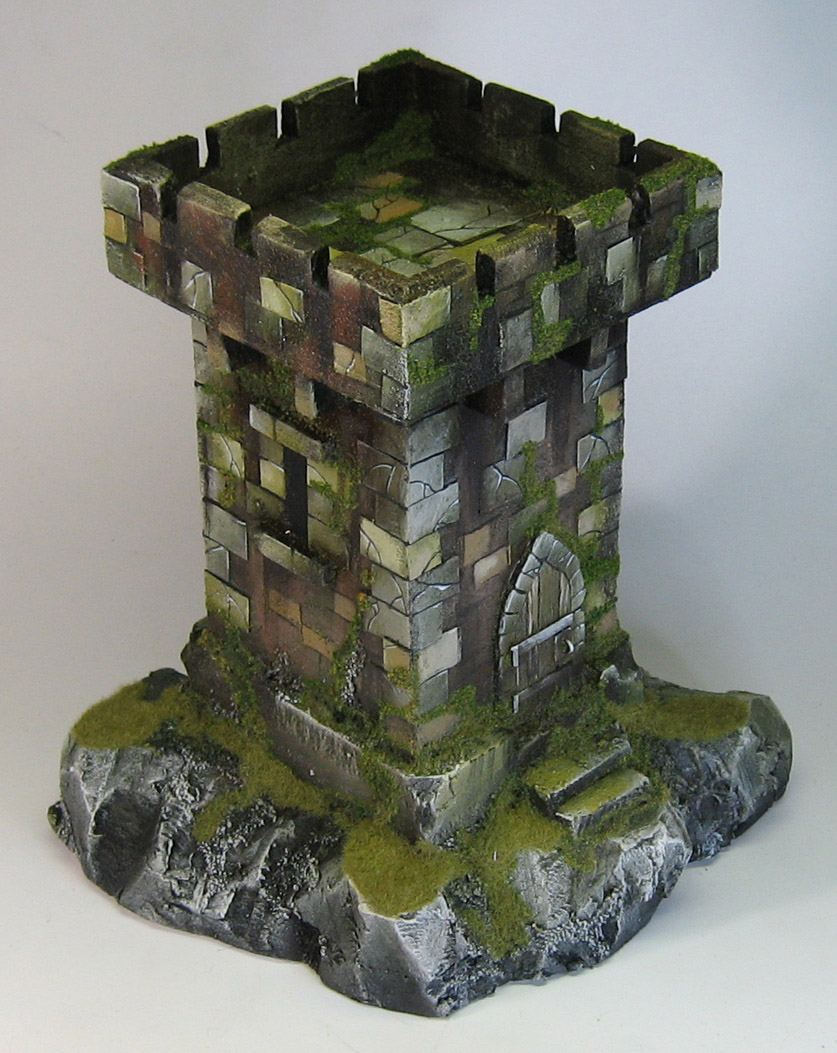 Some static grass was placed on the upper surfaces of the rock base.

One thing to note:  I was not able to take WIP images of this part of the process, since I was in and out of the house all day.  I wish I could have snapped some images of how I used thin lines of glue in the 'gaps' between some of the stones for the flock.  This made stone texture where none had been, which was very cool!

I have some more top views coming tomorrow!!!