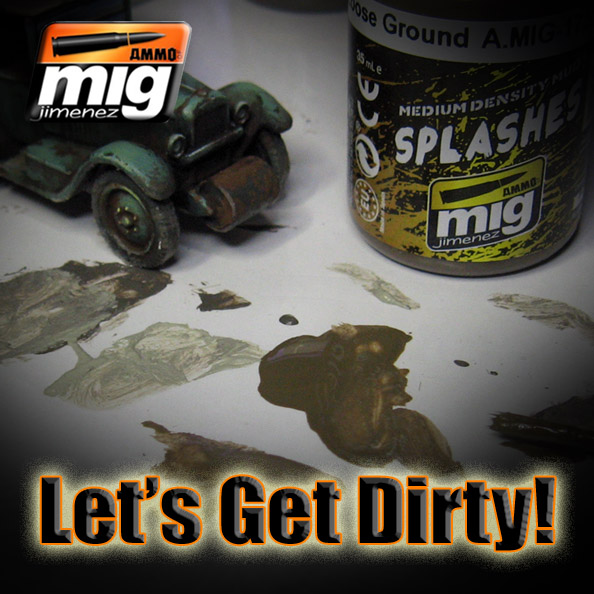 While have been doing a wide variety of weathering techniques on my vehicles in recent years, I have never tried any enamel based effects, such as these heavy mud and splash effects from AMMO.

I have done what I could with the powdered pigments that I already have, which are most effective when I have a limited drying time goal.  Now that I will be working on huge numbers of vehicles and other items that require weathering, the longer drying time of enamels is not as much of an issue.

To keep the first experiment with these products as simple as possible, I chose a vehicle (in this case a fantastic kit from Mad Bob's Miniatures) that had already been rusted and chipped in my usual method. 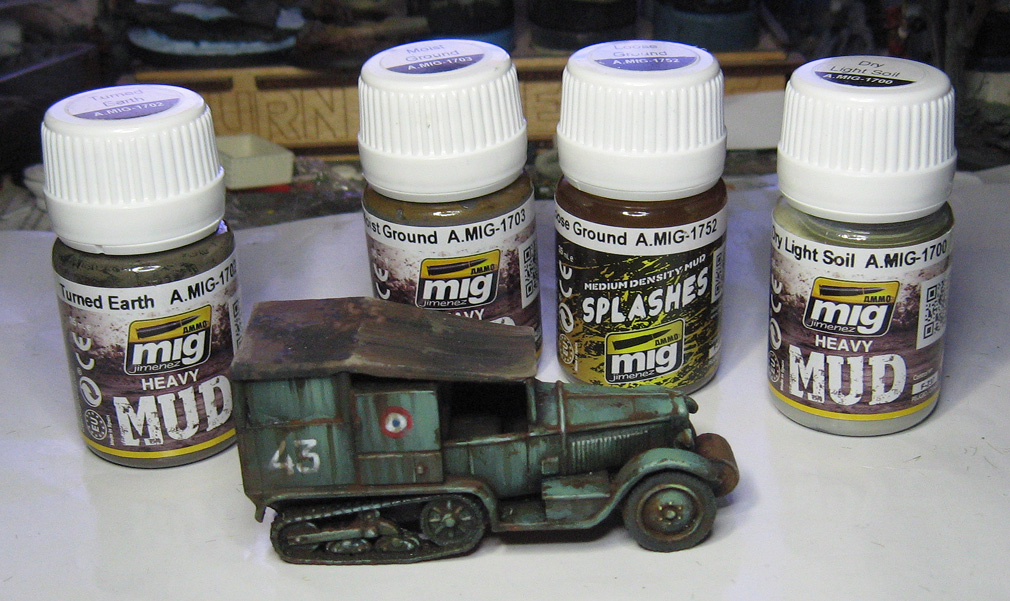 Right away, I noticed how incredibly thick these are!  I thought they would be based on how heavy the jars are... but I was very pleased with the heavy body of the material.  This image only gives a sense of how real it looked. 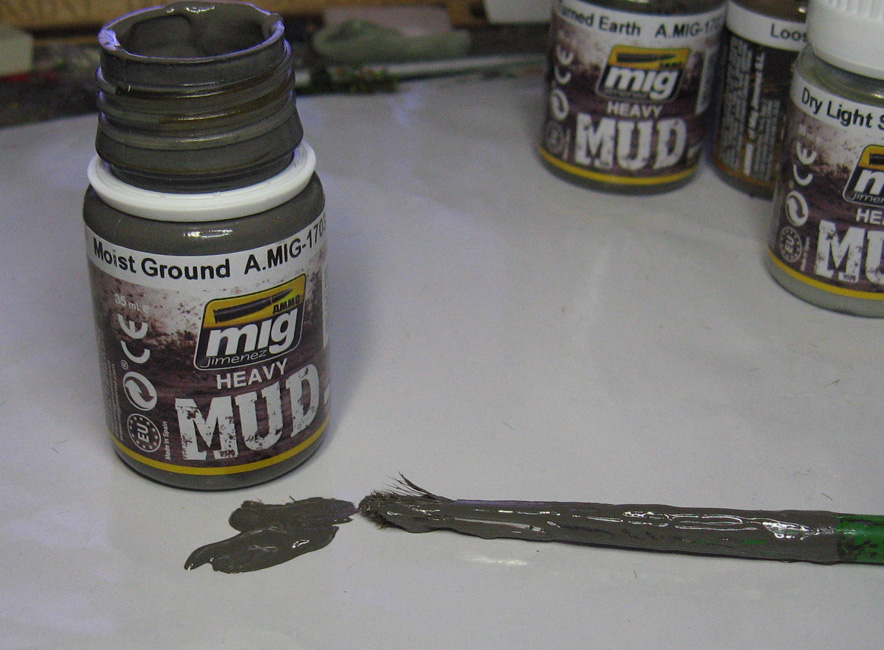 Not having to worry about anything drying too soon while I was applying the material was a nice change as well.  No need to rush, as the stuff on the palette would remain workable for hours at a time.

This meant that I could spend more of my focus on spreading the material around, and seeing how much thickness I could build in places.  Normally this would have to be done in layers, but it was heavy enough to make the desired effect in one application. Also, each of these mud products is designed to show mud in various stages of drying.  As you can see, this is fresh, heavy wet mud.  There is a whole series of these products that will take you up to fine dried dust! 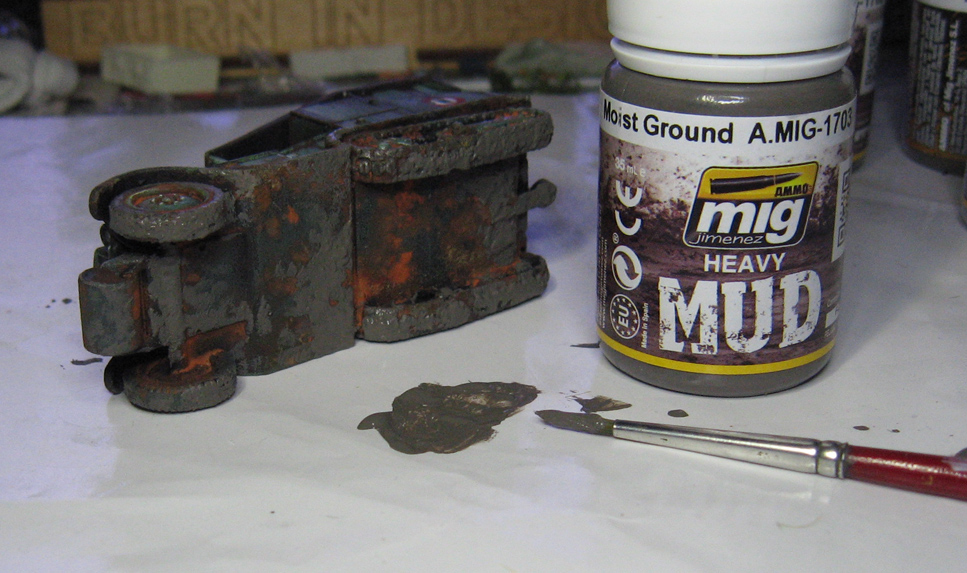 Speaking of which, here is that dry light soil.  It is not only thinner than the heavy wet mud, but a good deal lighter... the usual indication of dried dirt.

I discovered very quickly that they can be mixed together to get that in between stage, which was very cool! 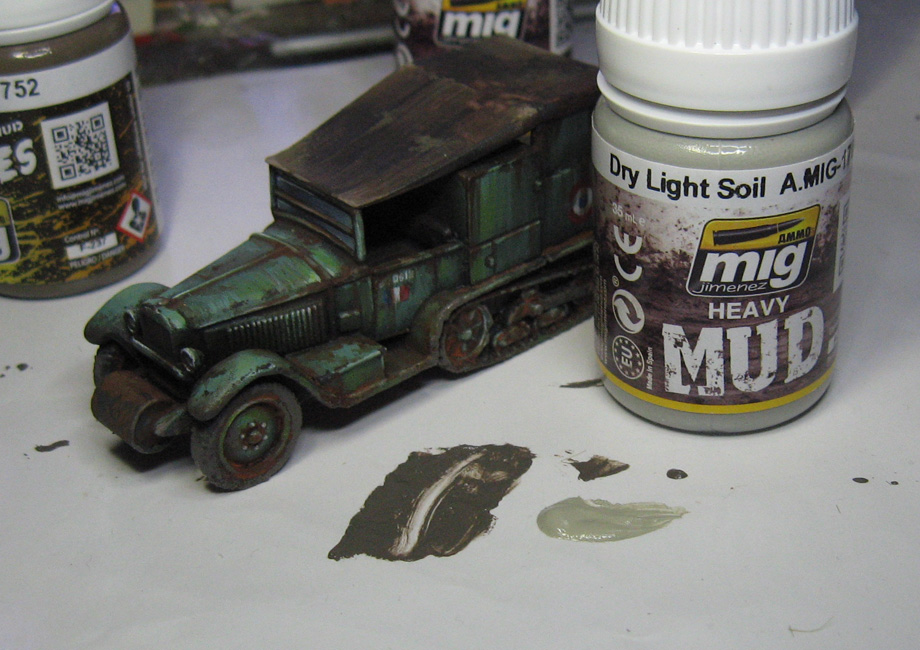 Even though I didn't have my normal spatter brush handy for this experiment, I really wanted to see what this product could do.  As you might expect, it was nice and thin, but still held it's texture well. 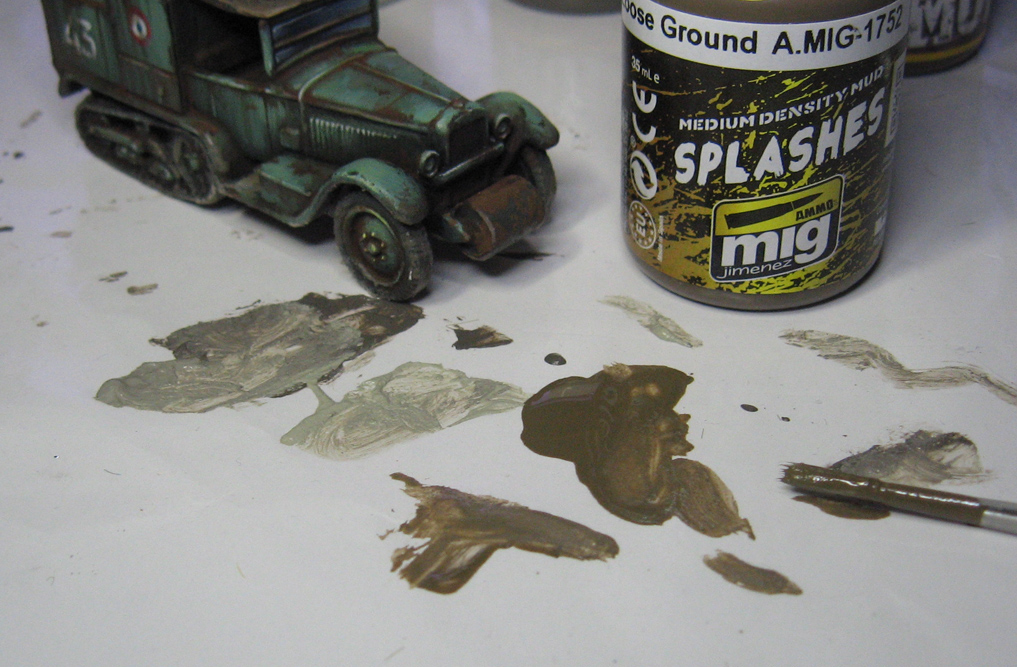 A few test spatters on the palette were very encouraging. 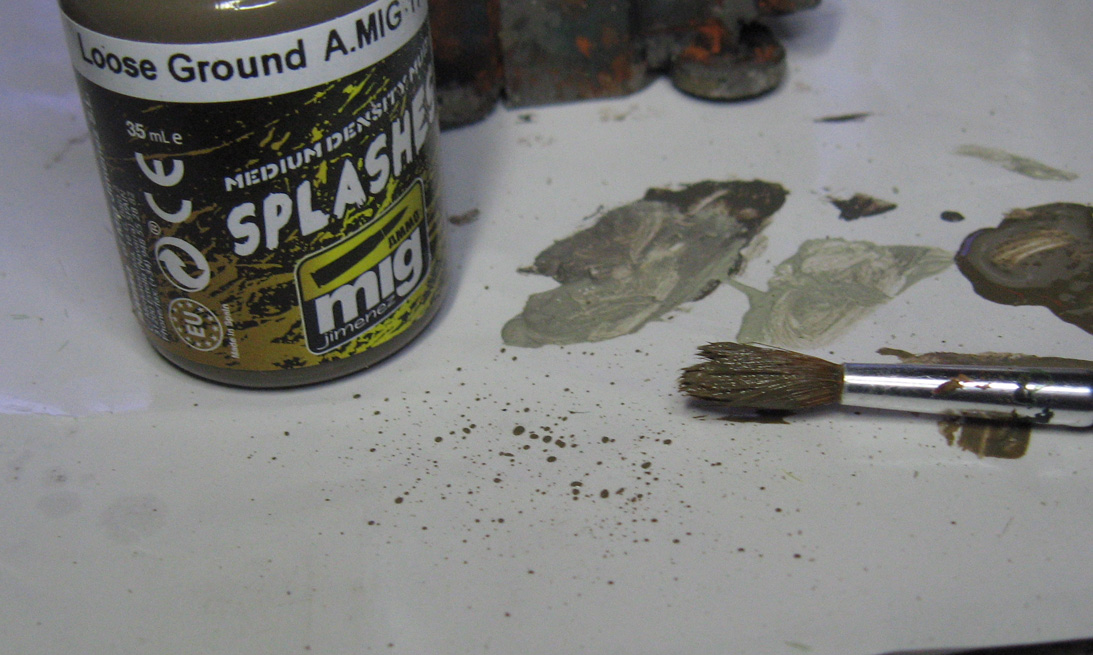 Even without my normal spatter brushes, I was able to get some nice patterns in seconds.  I can't wait to try this out on my other French vehicles (and troops), as there were some moments in the France 1940 campaign where roads became very muddy.

One particular advance by the Germans was even delayed by a few critical days due to early summer storms. 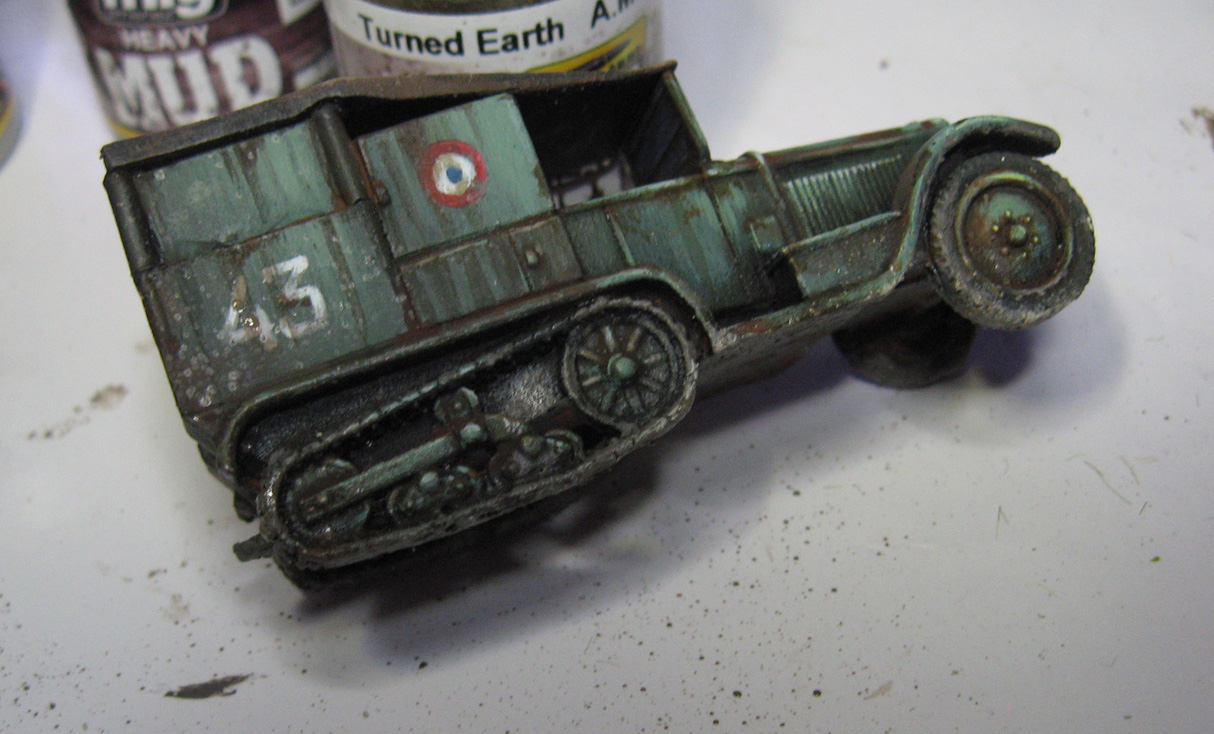 This test shows that you can get some very nice effects in a short period of time with a handful of these fantastic AMMO products.  I waited a few days to see if the colors would change, or the texture fade.

In fact, it was exactly as I had left it! 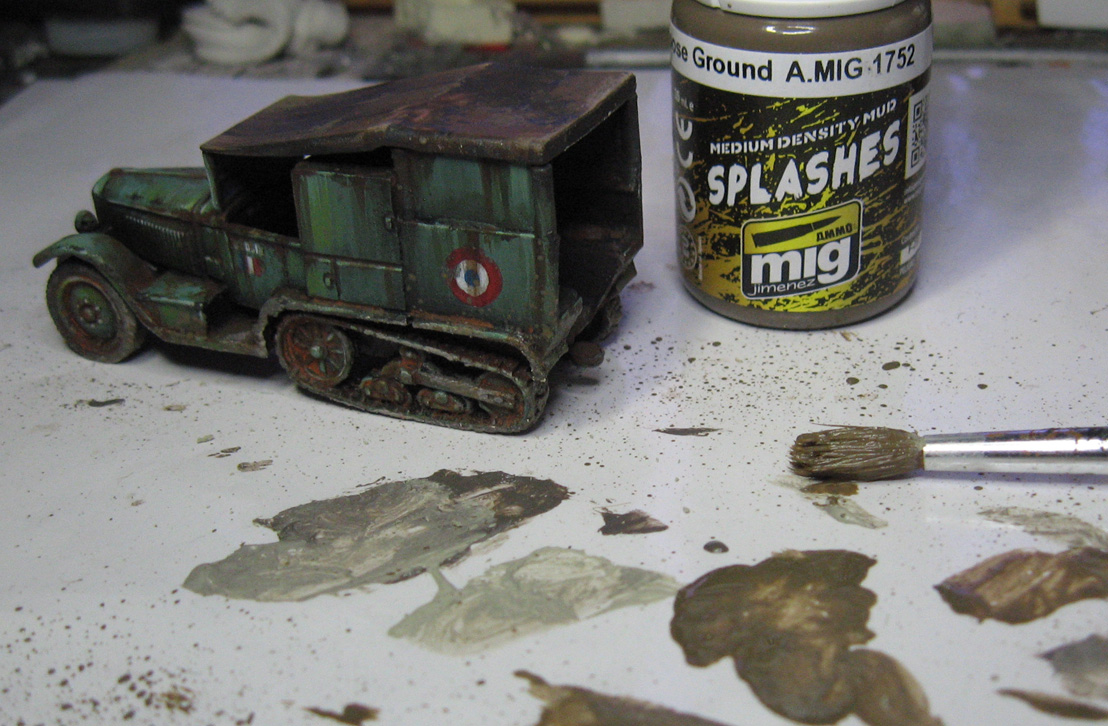 Here are a few quick photos of the results.  What can't be shown in pictures is the 'feel' of the texture.  When you physically touch the vehicle... it really feels like mud.  Hard to describe, but certainly effective!!

Also, as I mention all the time, it is important to "layer" your weathering.  I always begin with rust, like you saw here.  "Rust, then Dust", is the way to go.

The reason is simple... oxidation is usually caused by the collection of water in some kind of crevice, while mud/dirt ends up on "outer" surfaces more often.  This can be reversed for both effects, but it is a rule of thumb that I typically stand by. 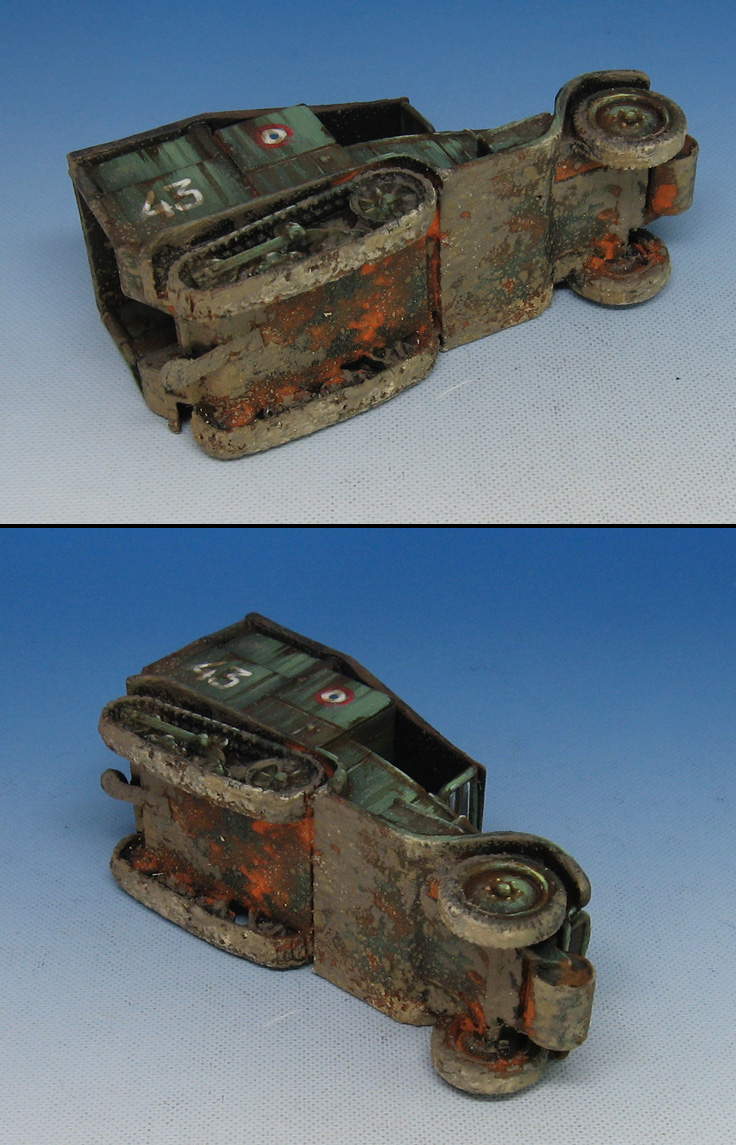 I will do a full post of finished images tomorrow for you... but here's a sneak peek at the finished results!  Many thanks to AMMO and Mad Bob's for some excellent materials on this test.

This is just the beginning, as I have a host of other weathering materials to try for the very first time.  And as usual, you will have a front row seat to the action... so stay tuned!!! 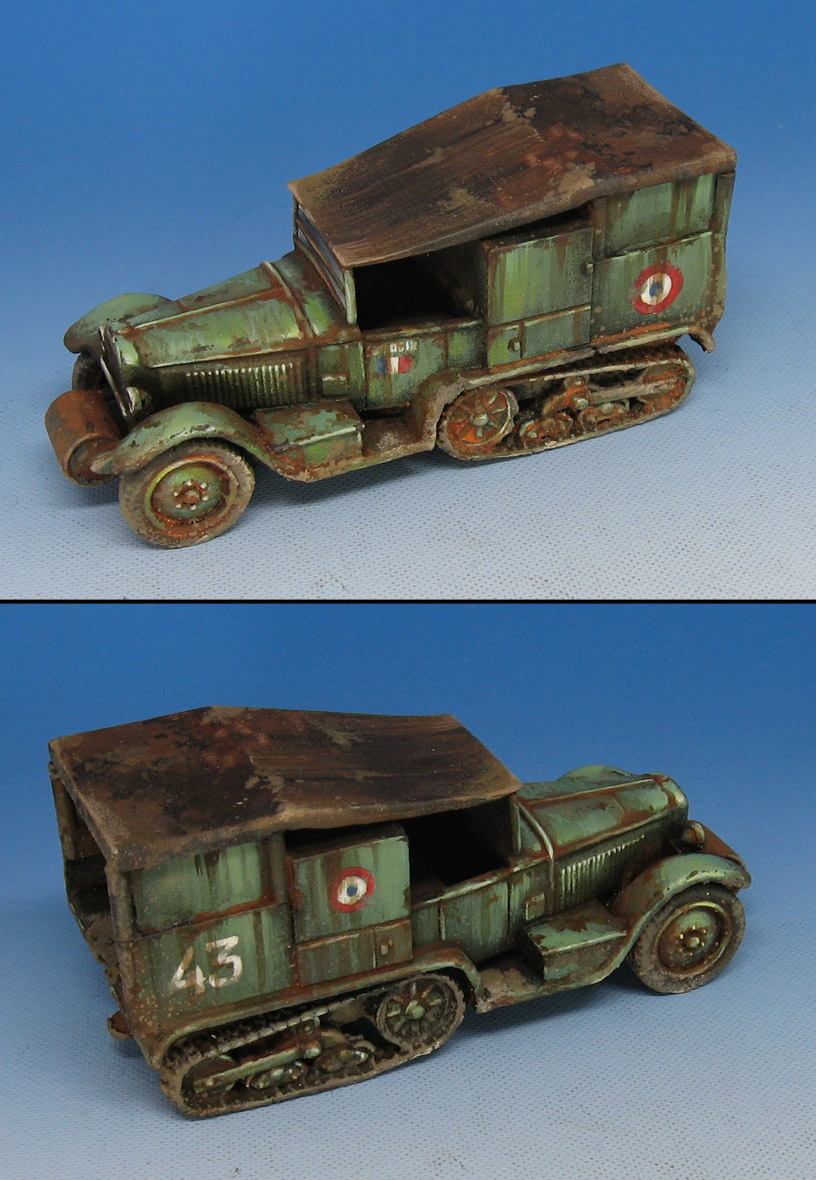