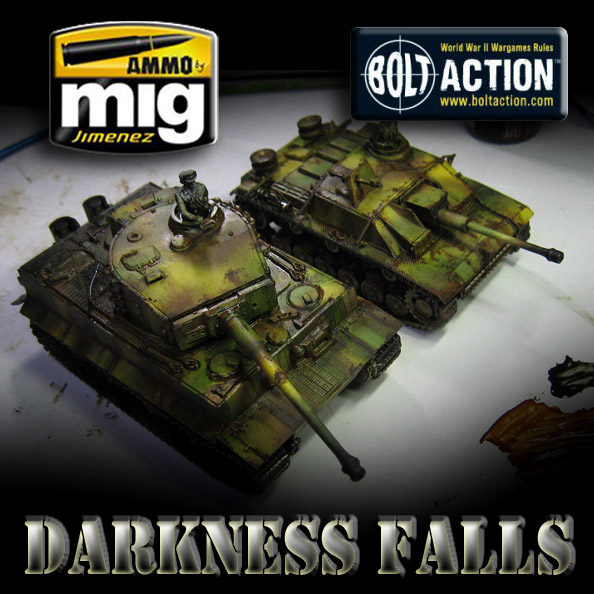 In the previous article, I had begun the task of shading the camo patterns, working with the green and brown washes.  This was demonstrated on the Stug, so now we shall see how that worked on the Tiger. 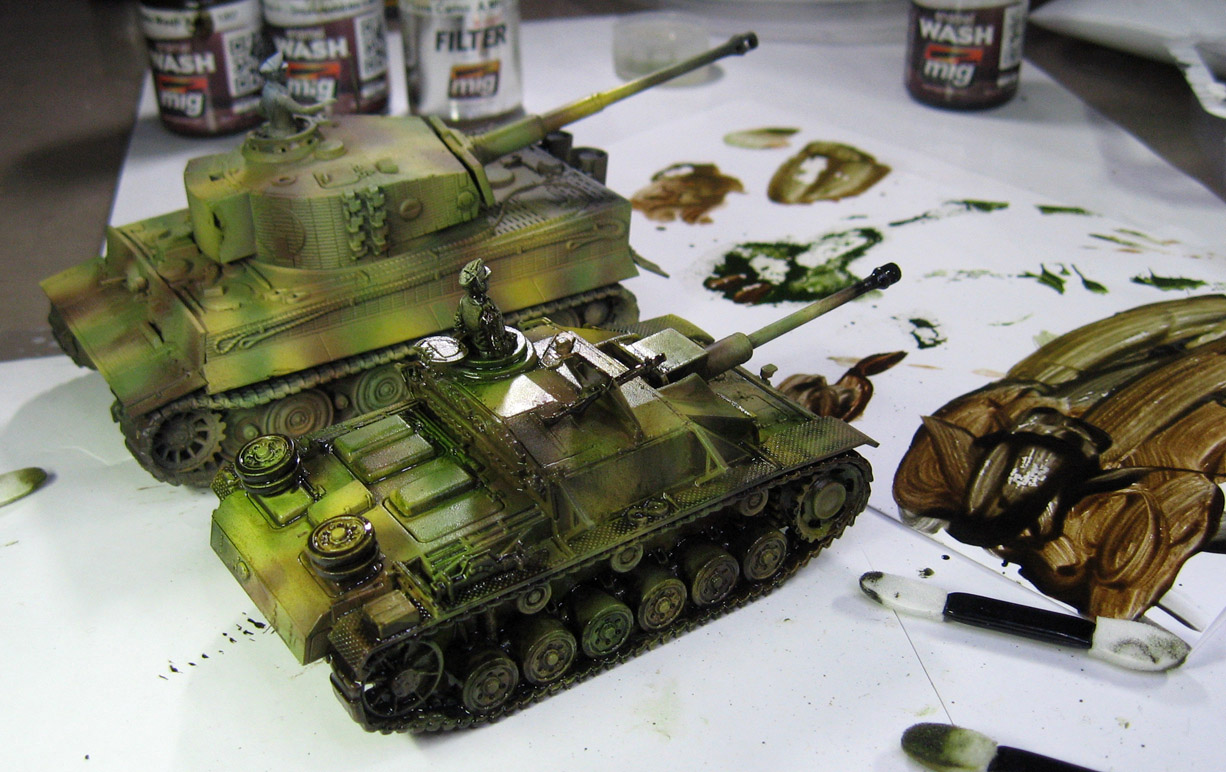 The upper picture shows the stripes of green ad brown wash that followed roughly along the original pattern of colors put down in the "primer painting" stage.  The image on the bottom shows the tan filter added, which blended all three together.

This would shade the zimmerit, which would be far more challenging than the flat sides of the Stug. Just as I did with the previous vehicle, sponges and brushes were used to soak up the excess washes and blend the colors together.  I made sure to use a light touch over the zimmerit, so that I would not soak up all the darker tones I had placed in those recesses! 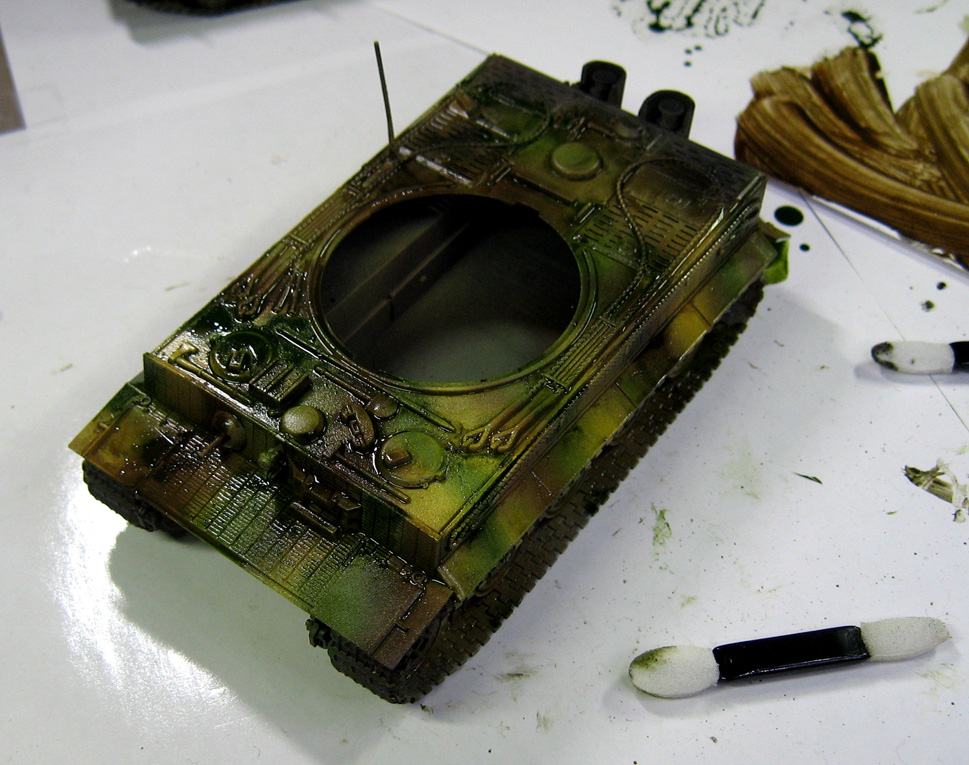 This turret is a rather dramatic example of the before and after.  Picture #1 shows the raw placement and initial blending of the washes, while #2 demonstrates what it should look like once the final removal and blending is complete.

On wide surfaces such as this, it is really important to preserve these lighter sections.  Having this lighter zone now will allow me to create more interesting colors and effects later in the process! 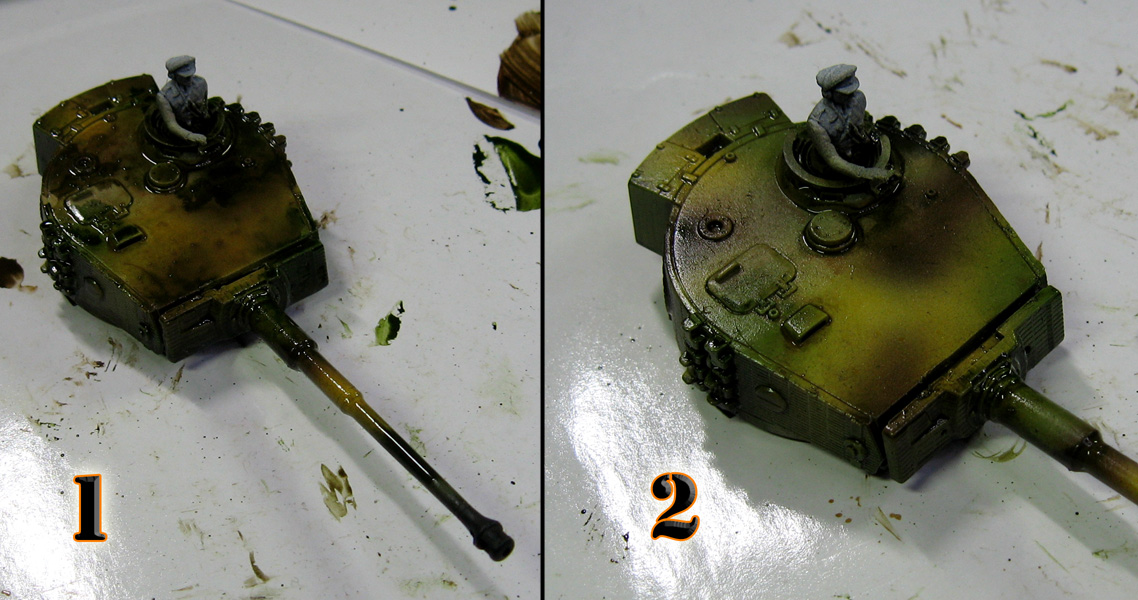 As I have mentioned in most previous articles, painting a miniature is like playing chess... you muct always think several moves in advance.

This is even more important in vehicle painting.  When I did the Primer Painting, I had to keep in mind that I would be doing these shading stages, followed be several rounds of weathering.  At each point, I mist be mindful to set up that next phase.

The upper picture shows me removing more of the glazes around the wire ropes.

When I last worked with the oils on vehicles, I realized that I could begin some "pre-weathering" by using my worn out filbert brushes as stippling mechanisms.

I could take some of the darkest washes and begin dabbing them around edges and other key locations, much like the second image. 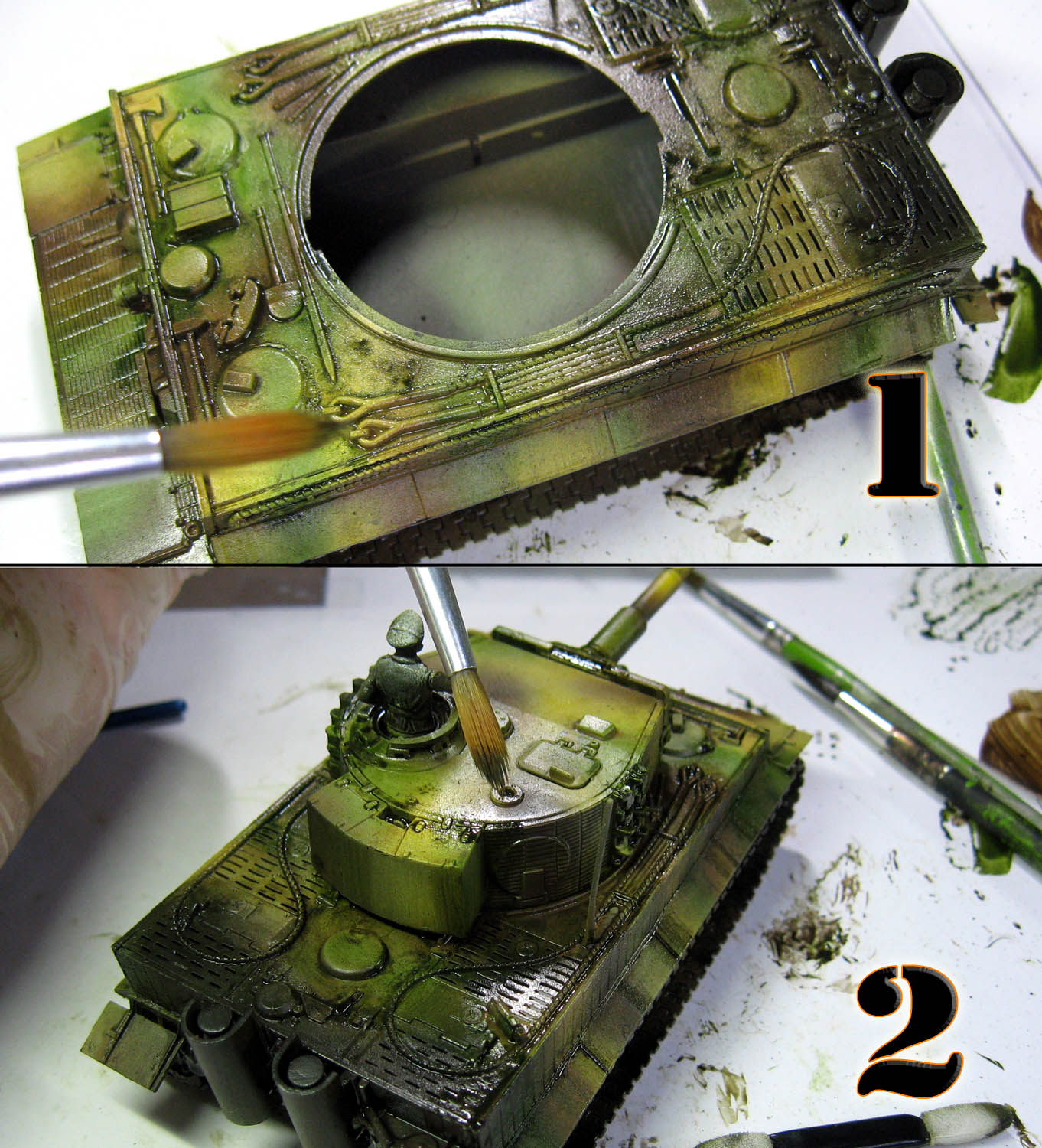 As oils stay wet and workable for so long, I could even start doing a little streaking of the darker tones across the light surfaces.  This was not the final version of such streaking, but rather a background 'hint' which would make the deeper grime and rust streaks jump out a little less.

Once again, thinking a few moves ahead! 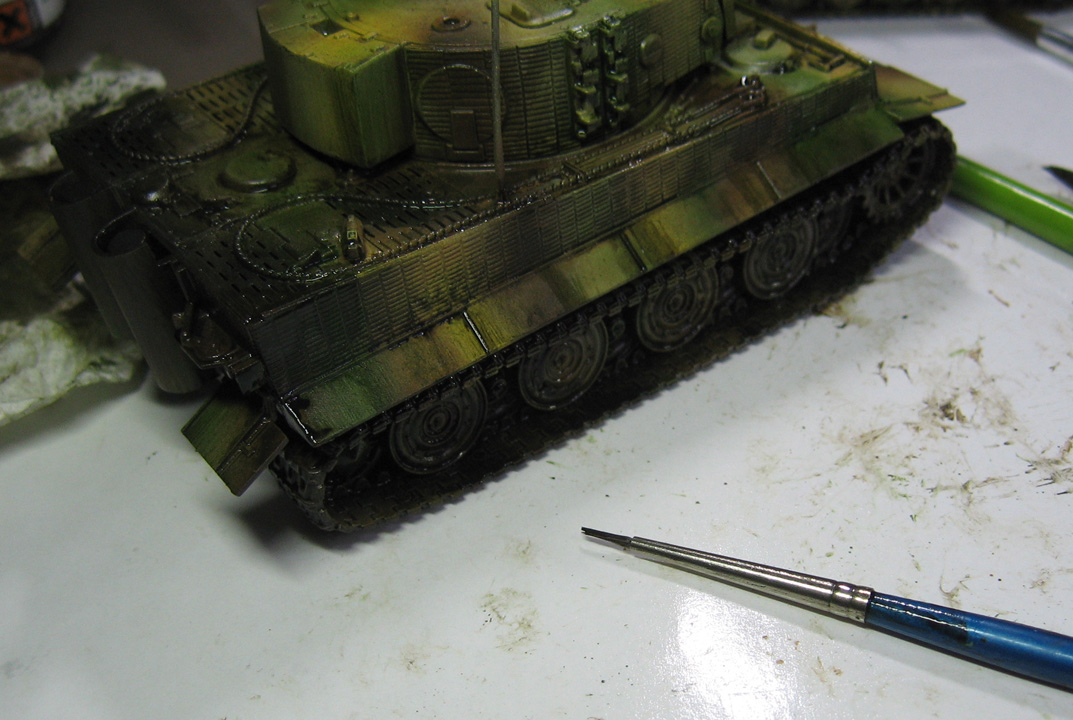 This was also my first opportunity to try out the new foam liners that I had discovered.  When searching for more of the broader tipped foam sponges, I noticed these thinner liners pop up in the Amazon feed.

I thought I would give them a try.  They were not what I originally expected, but I quickly found all kinds of unintended uses for them!  Weathering was definitely high on that list. 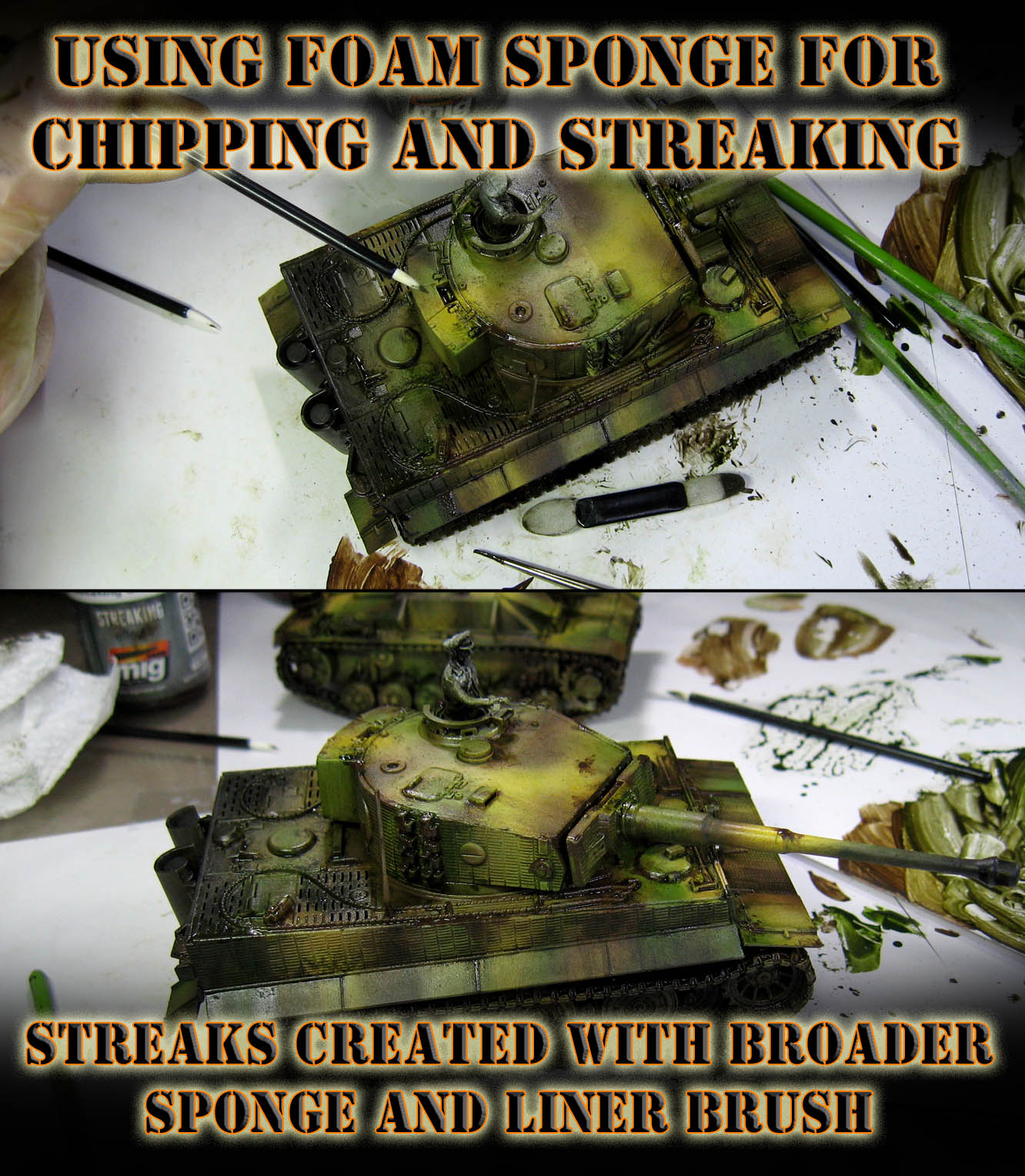 I now have the Stug at roughly the same level of completion as the Tiger.  Working on multiple vehicles at once is great, since it does allow the oils to have a little opportunity to set up.

My original intention was to work on 8-10 vehicles at once, but at this point, it would have been too cumbersome to display here. 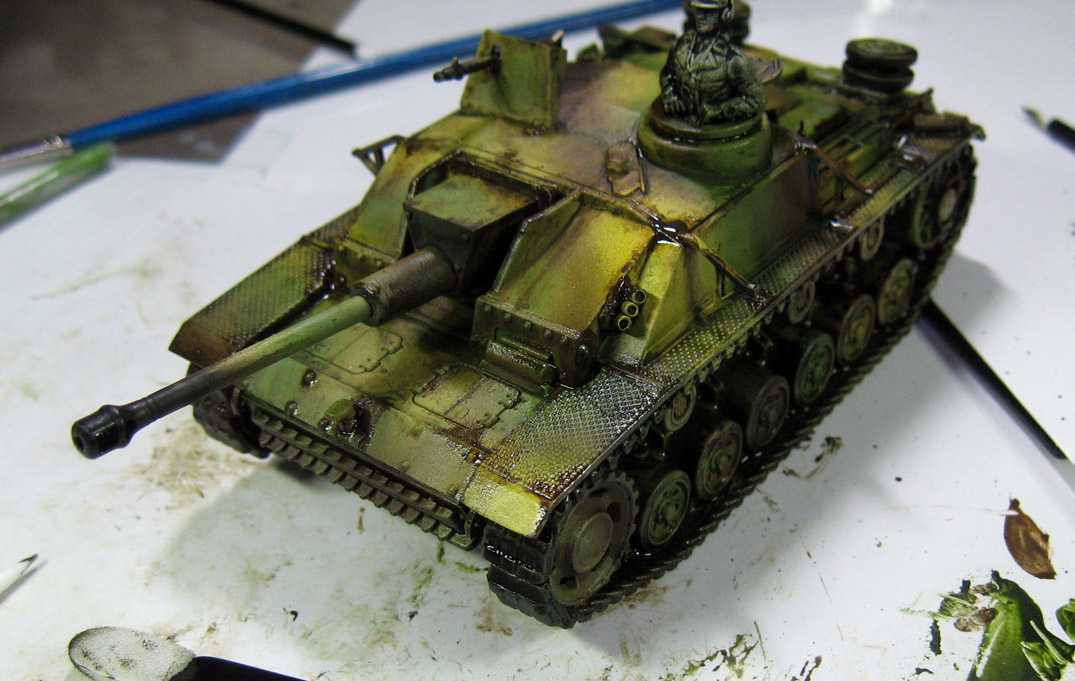 While the deepest dark washes were still wet, I started to apply the darker, streaking rust. 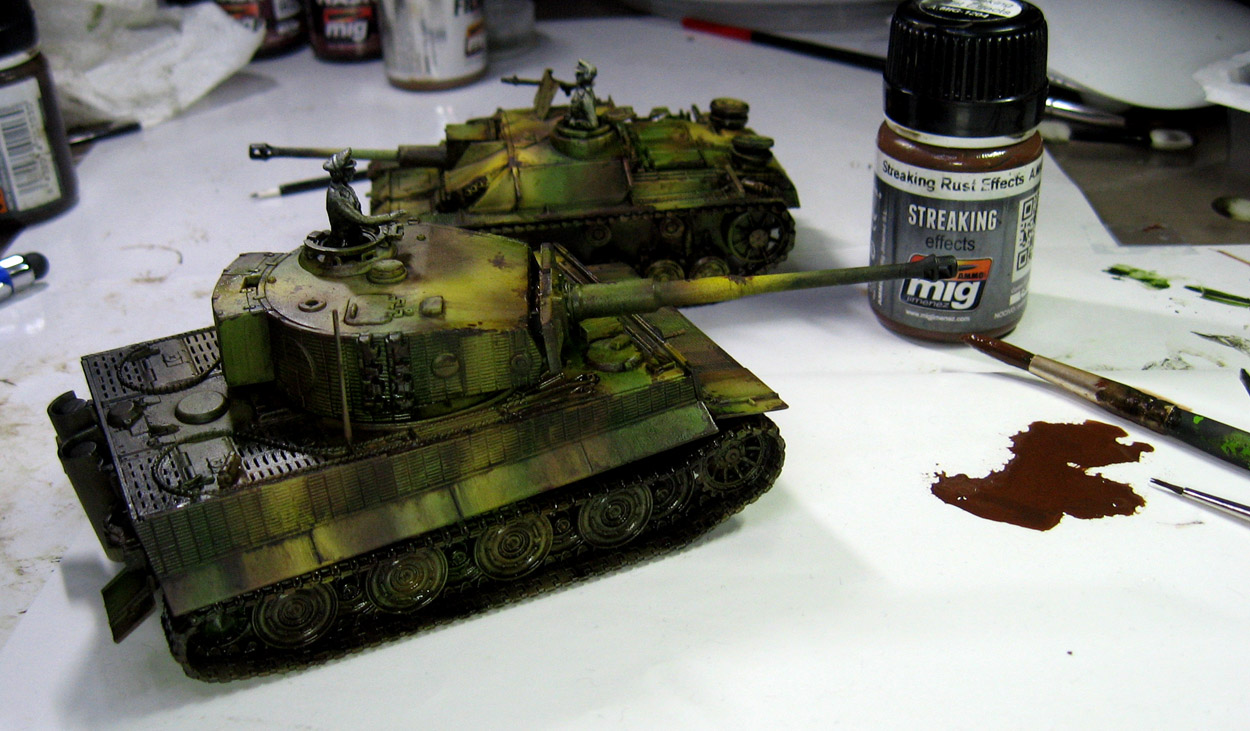 This was done in a few ways, some with softer blurred edges and others as stippling or streaks.  I was guided by the surface type, and its orientation.  For example, horizontal plates will weather far differently than vertical, while objects sitting on those plates will also add further variations on oxidation.

I must keep in mind that more rust will be added onto this darker layer... in the form of lighter rust washes and even weathering powders. 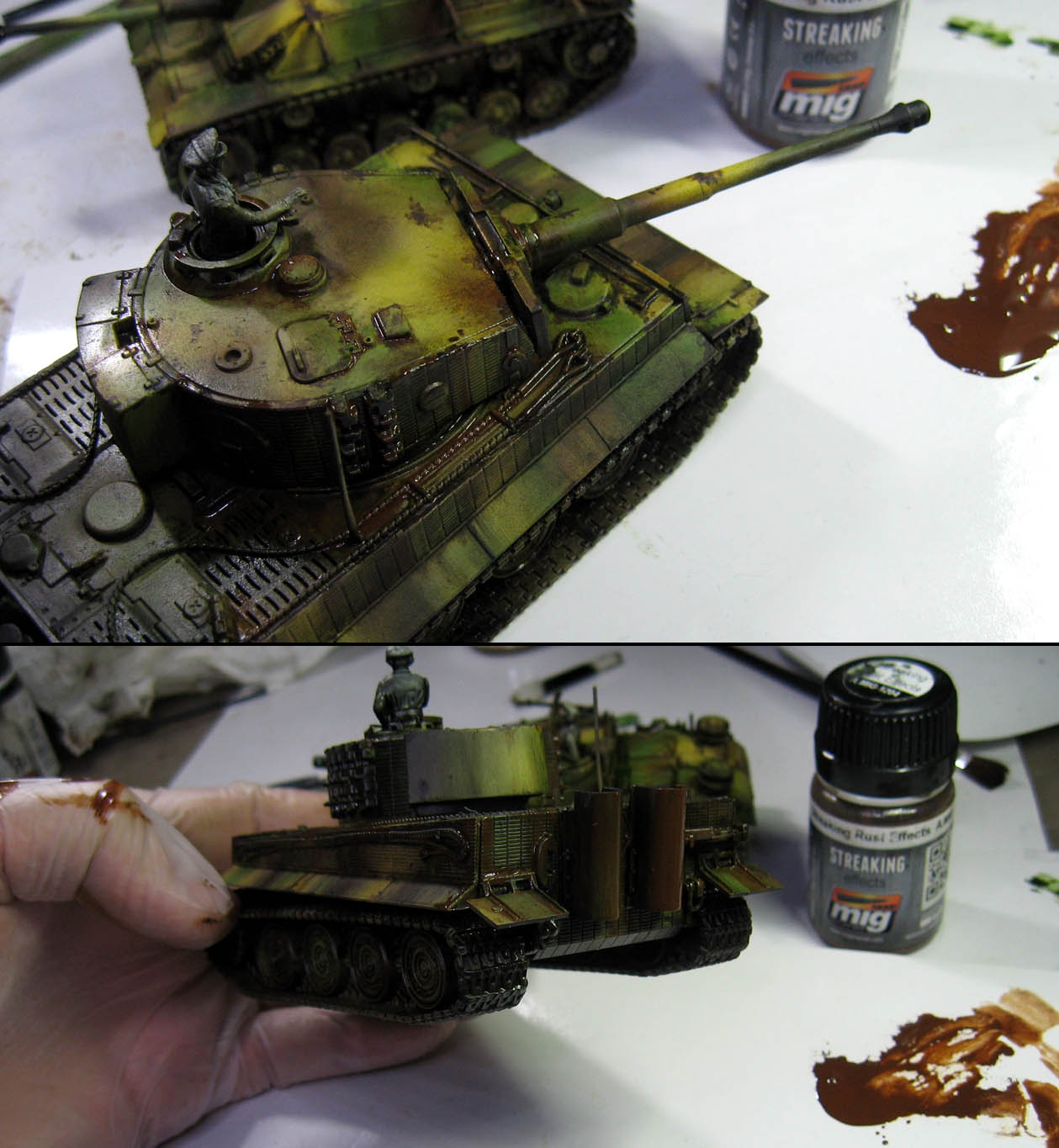 These spare tracks are certainly a prime candidate for rust accumulation.  Anywhere that water could pond for extended periods is a good location.  Also, I will be piling up some dirt and leaves in these spots, and the reddish tones will make a nice contrast to lighter green or yellow brown leaves! 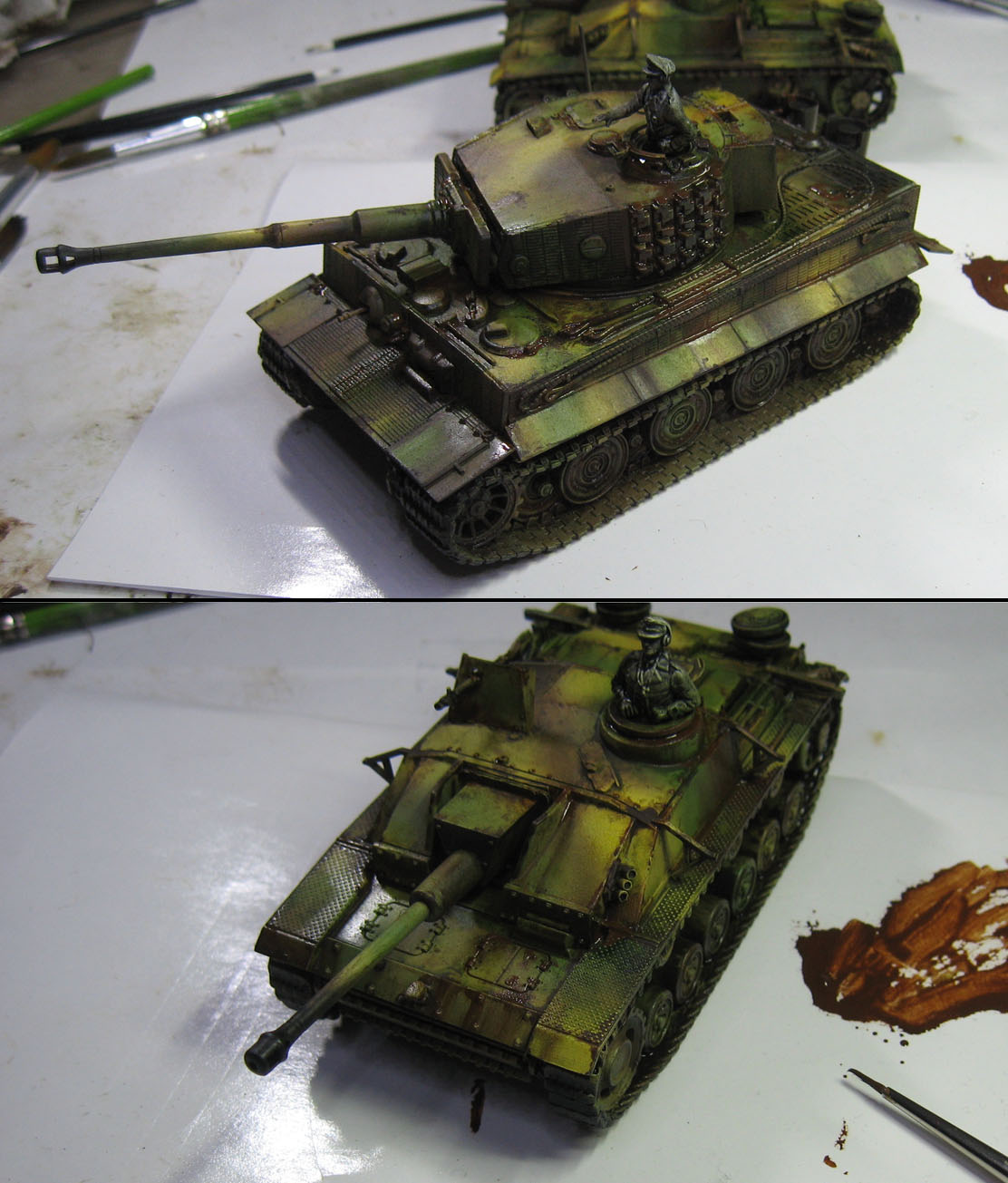 I didn't spend too much time on the wheels and tracks, since the armor skirts will be added later.  However, you can see the combination of deepest darks and rust around edges, rivets, plate joints, and so on. 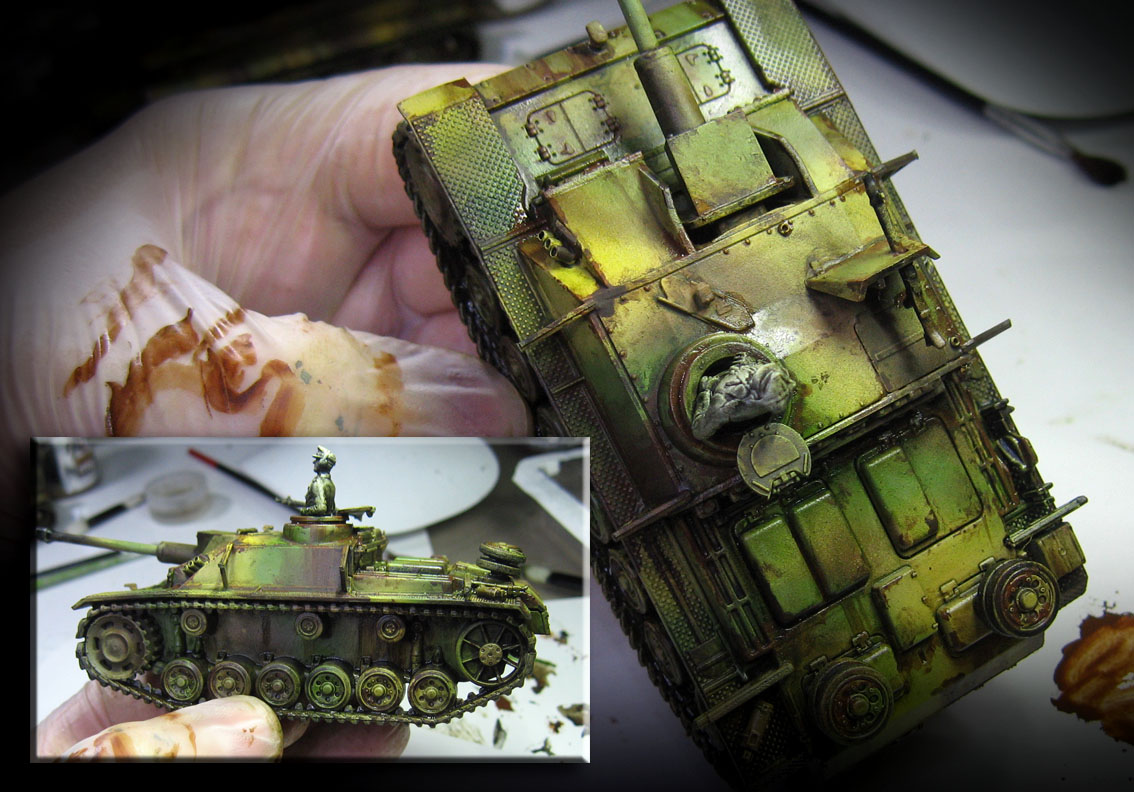 The vehicles are now let alone to dry over night, so that I can apply decals before the major application of weathering is started. 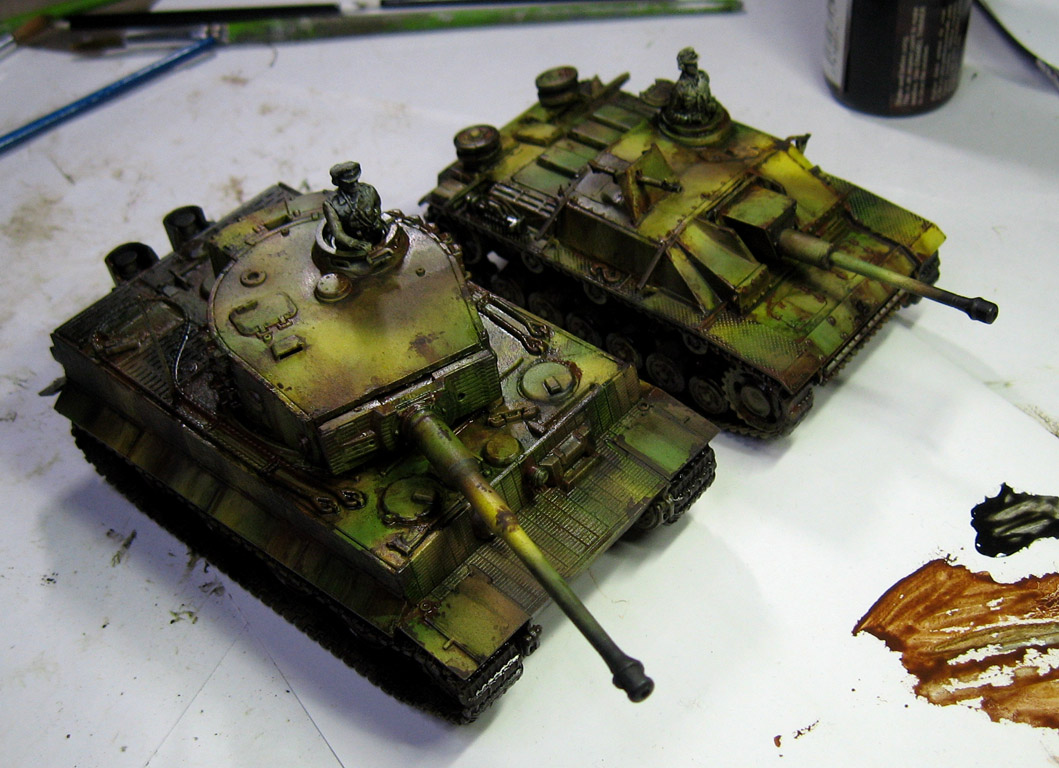 Here are a few images of those side skirts, which are also a nice and easy way to view the shading process on the 3 color camo!

#1 shows the green and brown washes applied, while #2 demonstrates the mixing facilitated by the tan Filter.  Image #3 shows the initial softening of the edges. 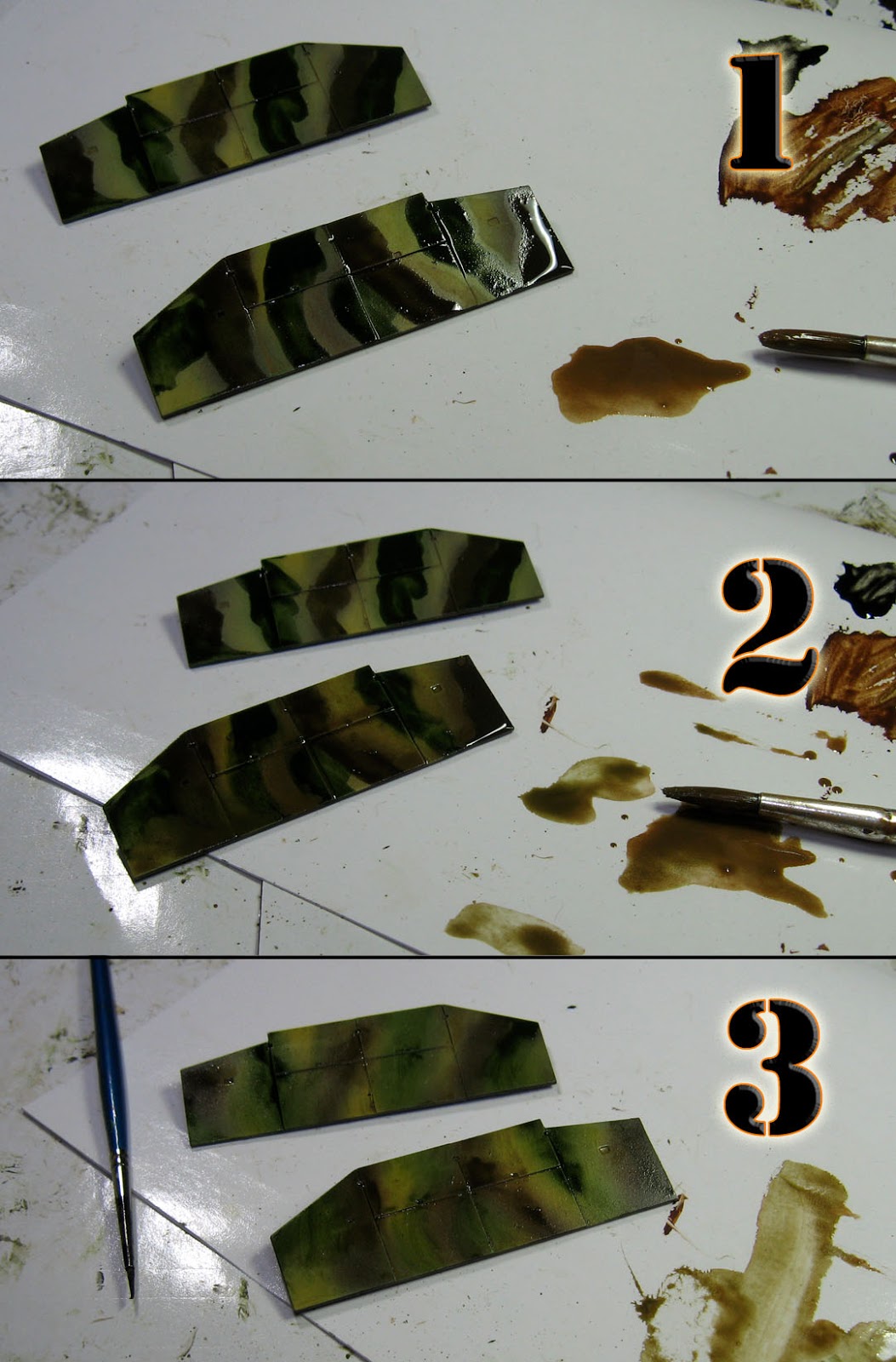 Now we shall wait for this to dry, and move on to even more exciting discoveries!!  Stay tuned...