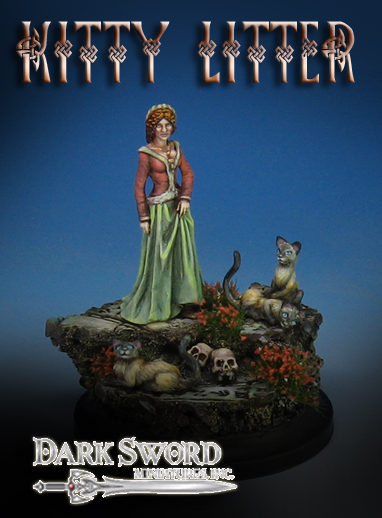 Time for some images, now that the final miniature has been added to the base with the kitties!

I believe this Dark Sword figure is part of the Game of Thrones set.

It was important to keep the colors toned down here, but yet have enough difference from the cats and the base to be visible.  I used muted reds and light greens to play off the grey on the base and the yellowish tan of the Siamese cats.

Green and red are opposites, so those had to be muted as much as possible.  It would be quite festive otherwise! :-)

Toning them down is simple... greens were mixed into the reds, and vice versa. As you can see, imparting just a small amount of the opposite color is a way to make hues which would normally contrast work in harmony.

Once again, I used some foliage to tie in a color from the figure down into the base.  The red flowers were perfect for this!  They also brought a splash of color to the base, and helped to make the blue eyes of the cats a little more distinct.

Scenes and vignettes like this one are possible by "going vertical" on a base.  In this instance, it only involved creating a second 'level' to the base, so that the cats could be spread out a bit, and leave the central figure less obscured.

You can also see the "triangle" composition and the 2 to 1 ratio in effect.  That's the basic of composition.  Never have two equal sized objects standing side by side equidistant of each other, as that is very disturbing visually.

The triangle form of composition like this is closer to the golden ratio, which is the ideal mix of large and smaller objects together.

Posted by wappellious at 1:57 PM 4 comments: