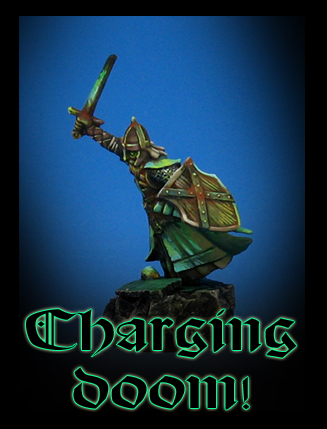 While all of the Army of the Dead figures have interesting poses, armor and weapons, this one is a favorite.  I even added a few extra streamers of cloth, putting a thin layer of green stuff over a strip of tin foil.

The tin foil provided the stability, allowing the green stuff to set in place.

Just as I did with the other Army of the Dead, I combined the use of intensely saturated fluorescent paints and the weathering techniques.  It is easiest to see on the edges of the robes, the shields, and even on the weapons and armor.

The application of those weathering techniques, which was as simple as modified glazes, made the brighter fluorescent colors even brighter, and more ethereal as opposed to a 'light source' of its own.