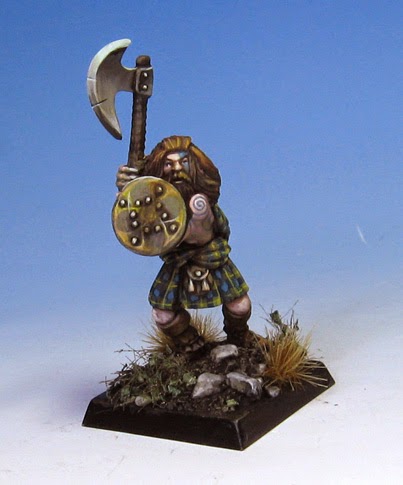 The battle for Caen 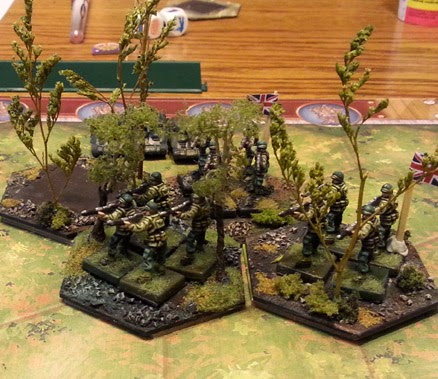 A while back, Rich and I settled down for another campaign, utilizing some of the new terrain pieces we had been working on.  The Campaign was caled The Battle of Flanking Caen.

Here are a few views of the battlefield prior to the first fight. 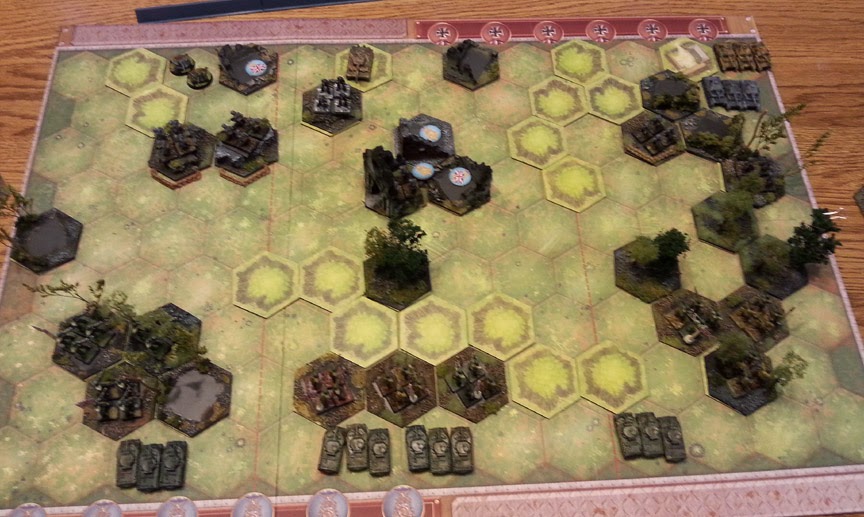 Seeing the board from this angle, with all the terrain, looks very daunting!

The British elite troops are in the woods on the right, squaring off against the Waffen SS and their armored support. 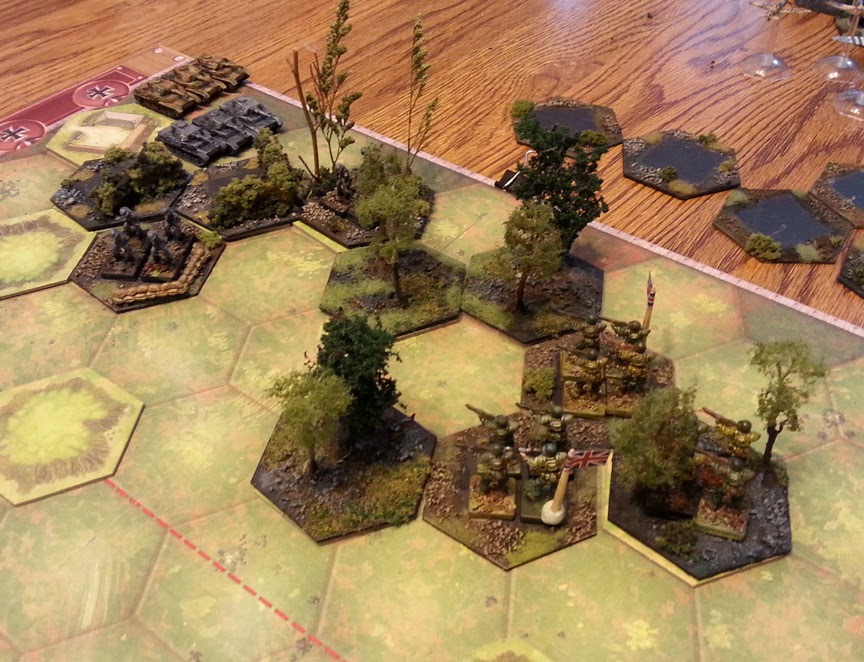 More Brits in the woods!  Ready to charge into town! 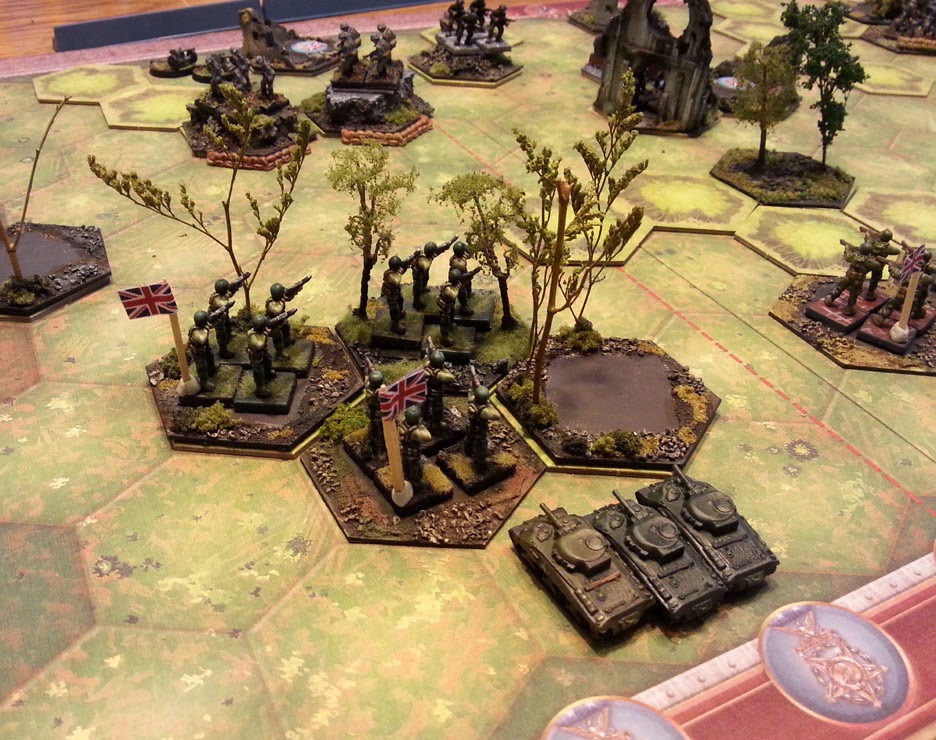 Here you can see some of the 'generic' forest hexes that we created.  Using these really gives you a sense of difficult terrain ahead!

Again, if you recall the last terrain making post, we had realized that we needed to fill out all of the hexes with terrain, not just what the units were standing on.  It was all too easy to simply shift a unit from a non terrain hex onto one that only had the original painted versions. 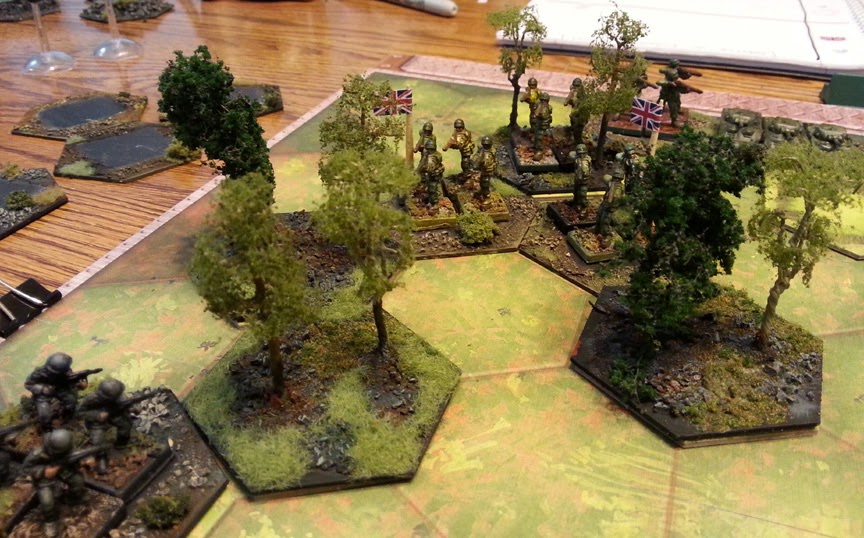 So, many more hexes were created.  All worthwhile, however, to get a view such as this!!! 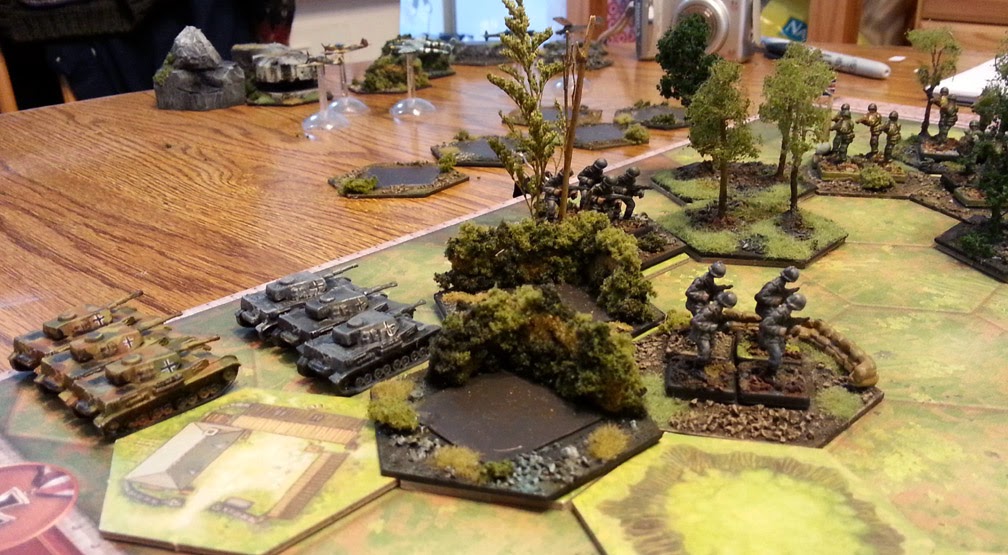 As with all campaigns, you have the reserve rolls.  You don't have to use them, especially if the units that are available won't be very helpful.

Rich decided to keep his armor roll, placing it off board in reserve. 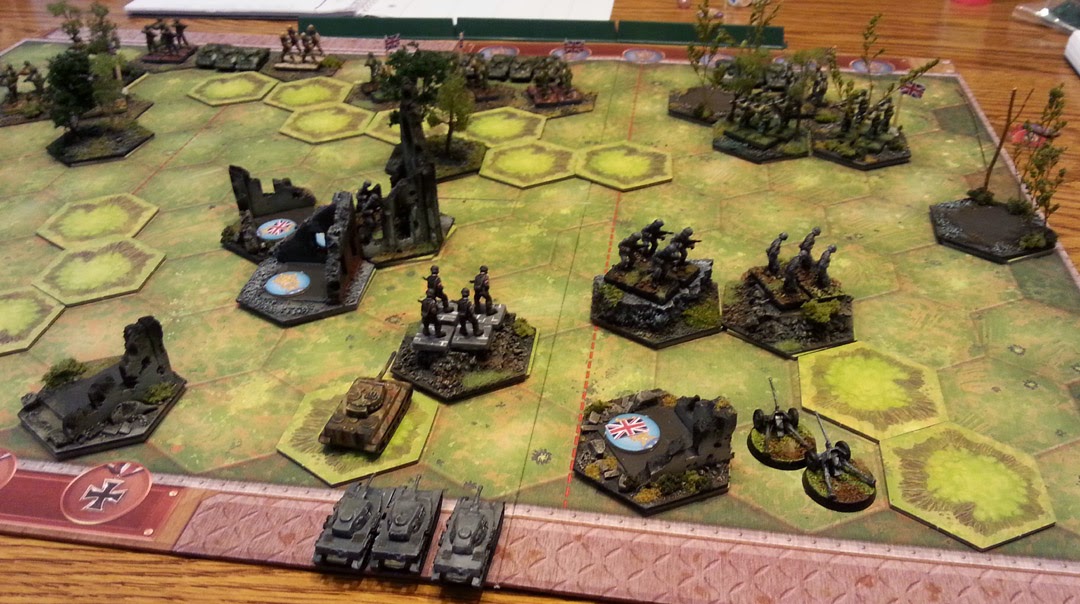 I rolled two infantry units.  Knowing that I would have to attack the town of Caen, I felt that some extra infantry units could be very helpful.  They are ideal for city combat.

The trick is, you don't know what cards you are going to have!  So, if you place them all in one section, they might never get to move.

I decided not to take the chance, and put one in each section... despite the temptation to put them in the center, so that I could go after the town. 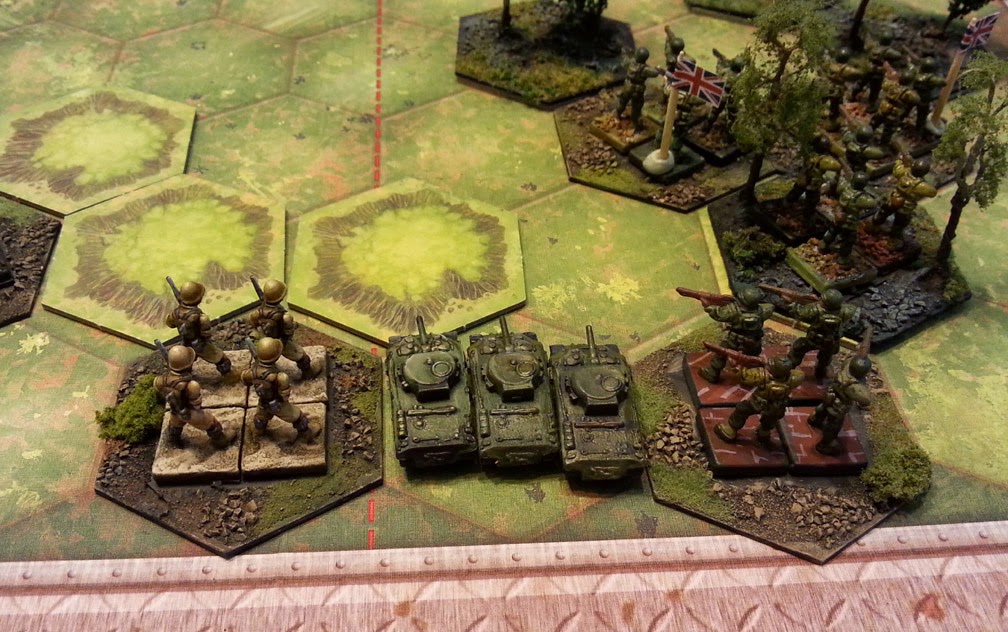 Also, I knew that I would only have 4 cards to begin, making it even more likely to get the extra units stuck in the back line. 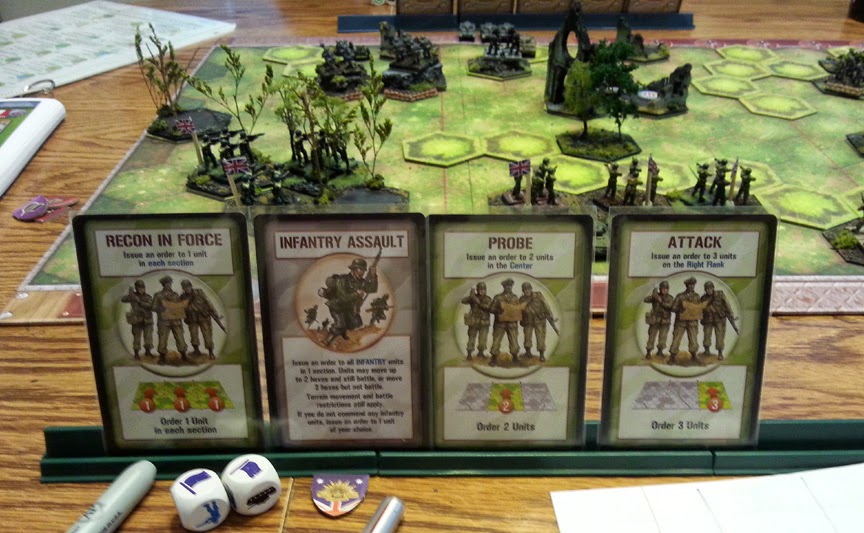 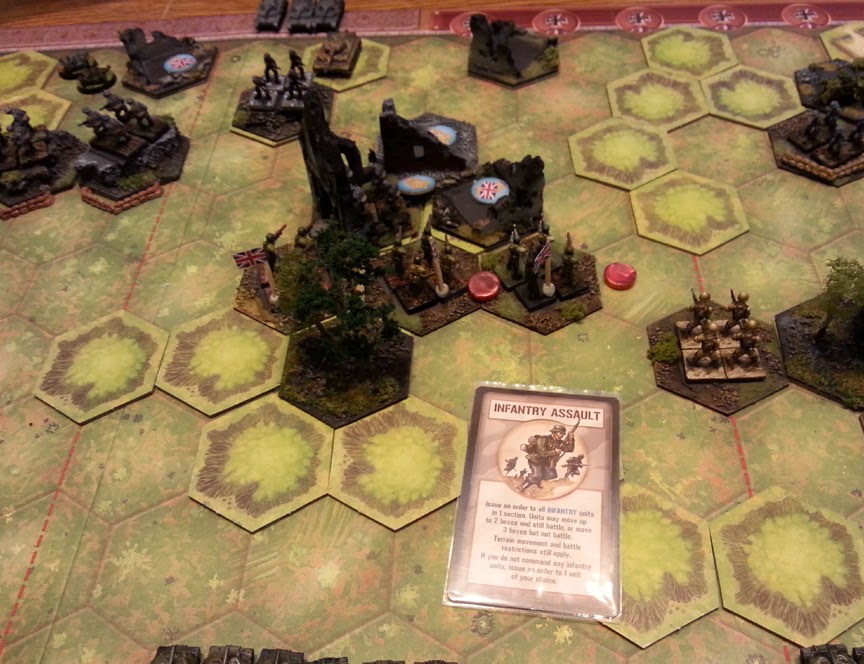 Uh oh!!  The dastardly Axis had a counter attack!  Will the brave warriors of the Union Jack be able to hold out against such a surprise attack?  Stay tuned for our next episode, as the Batle for Caen rages!! 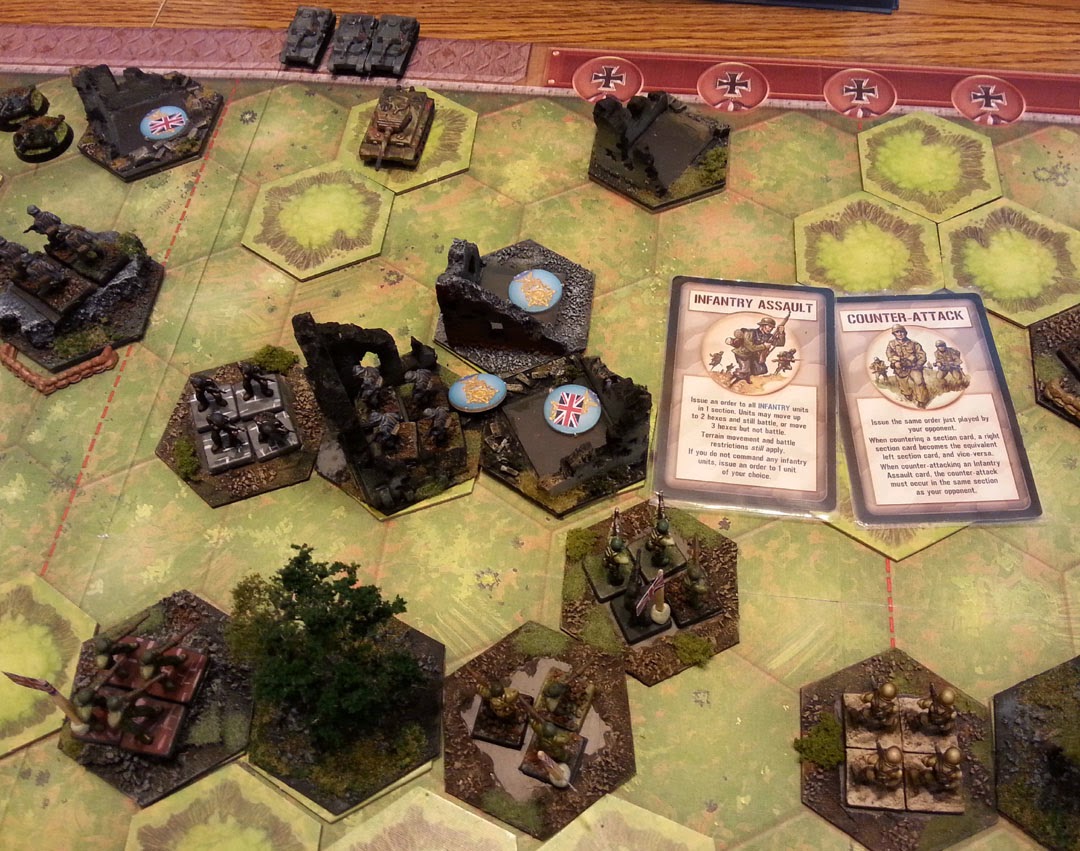 Posted by wappellious at 1:29 AM 2 comments: