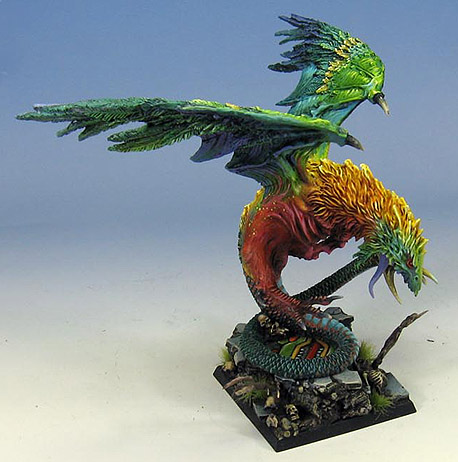 This Cockatrice was painted for my Lizard army for the Storm of Magic expansion.

The base was done in the same style as all my other Lizardman bases.  You can get a glimpse of the symbol in the picture above. 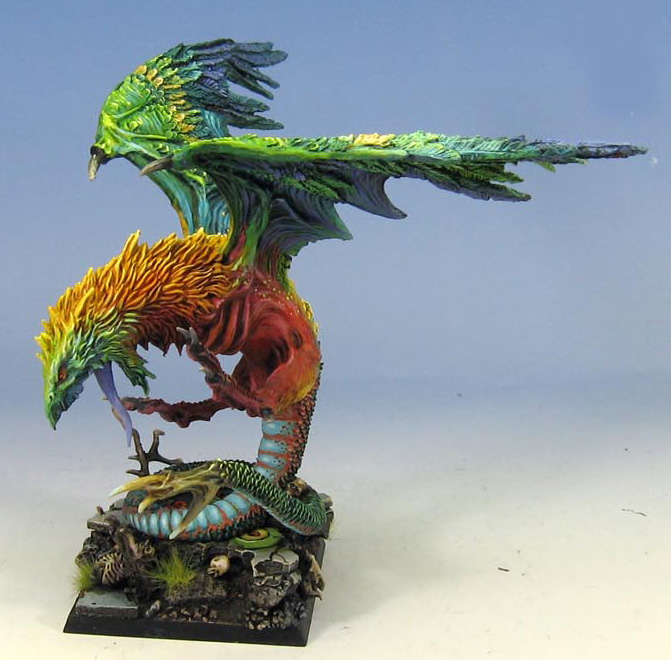 I did many searches for images of the Cockatrice for color ideas.  There were three designs I chose from in the end.  I chose to go for the kaleidoscope of colors, which would go very well with all my colorful skinks!

At some point, I want to get some more of these, and put a small howdah on the back filled with skinks tossing rocks on hapless enemies! 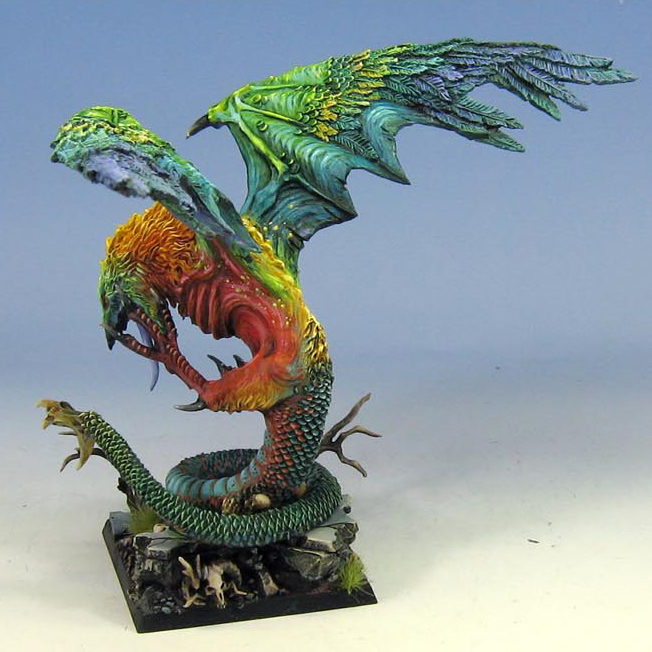 Plus, I had all sorts of fun doing the color transitions! 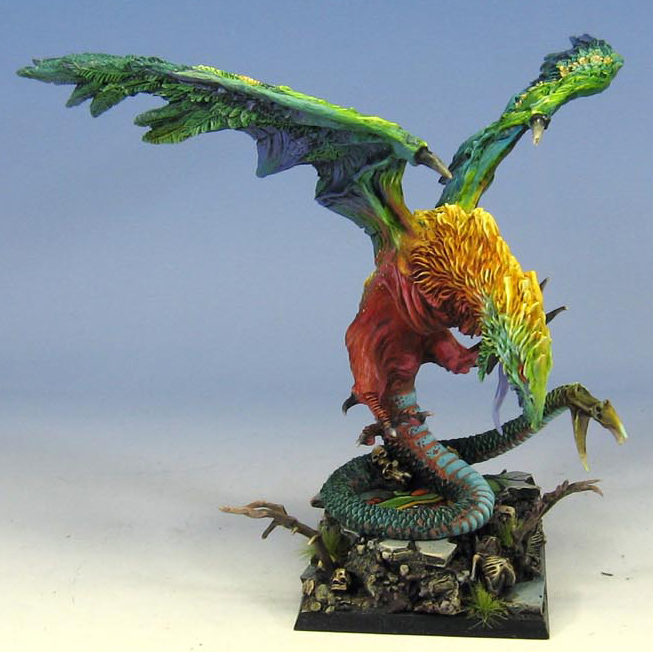 This was one of the pieces that really cemented the 'shaded basecoat' technique in my mind.  I worked quickly, with the bigger brushes, and that we essential an getting these transitions. 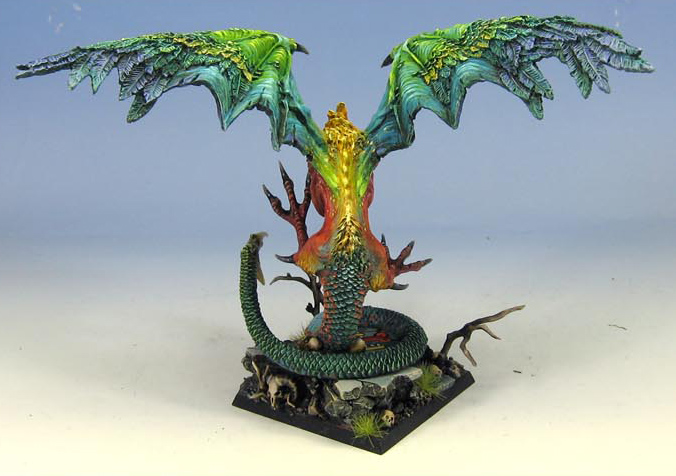 The glazing and tinting was very fun as well.  I could make one area more purple or more teal in a heartbeat.  A treat! 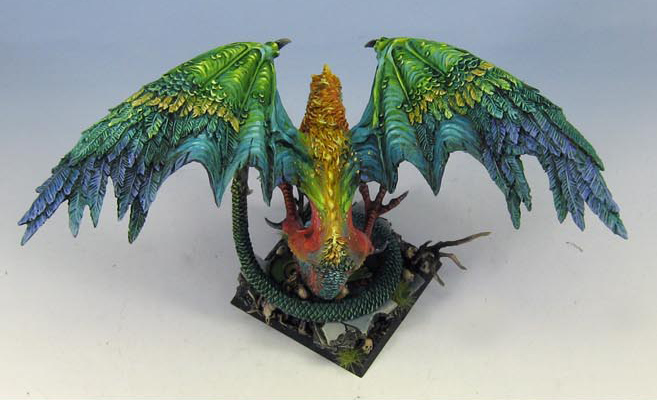 So, I will continue with the Lizard review, as the 1st Birthday of the Blog is just days away! 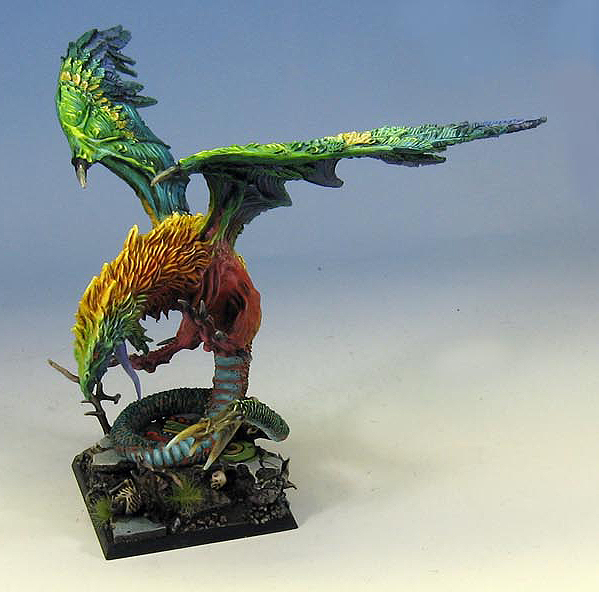 Also, there are now only 7 days left to enter the Painting Pyramid!!

Back to the future! New pics of Tette-Ekko 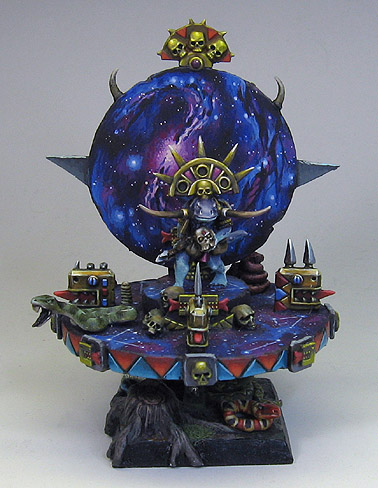 As the One year anniversary of the blog approaches, I am thinking a lot about the army that launched it all... the Lizardmen!!

So, I will be trying to take a few new pictures of some of my favorite Lizardman figures, as well as the Temple of Blood.

To start things off, here is a real favorite of mine, Tette-Ekko.  He was a killer in the game, with the ability to redeploy units in before the game started, but bombard units from 'space' with comets!!

He was also very fun to create and paint.  As you know, I love painting my spacescapes, and the Lizardmen were fantastic for that subject.  If you have seen my scratch sculpted Engines of the Gods, you know what I am talking about! 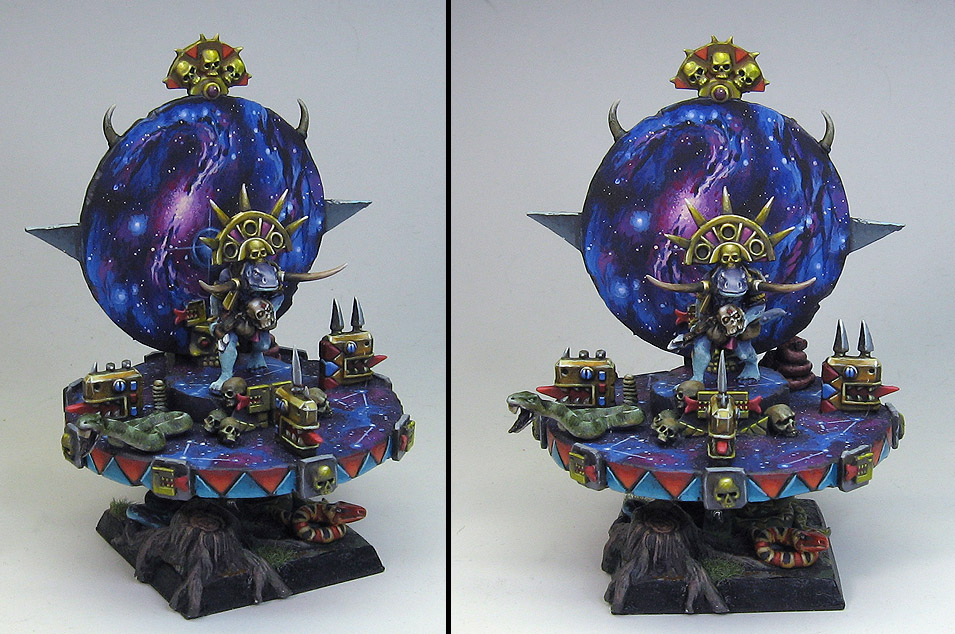 I used baked sculpey and green stuff to create the palanquin.  Fortunately, there is not a single drawing or miniatures to represent him, which gave me full freedom to do as I pleased! 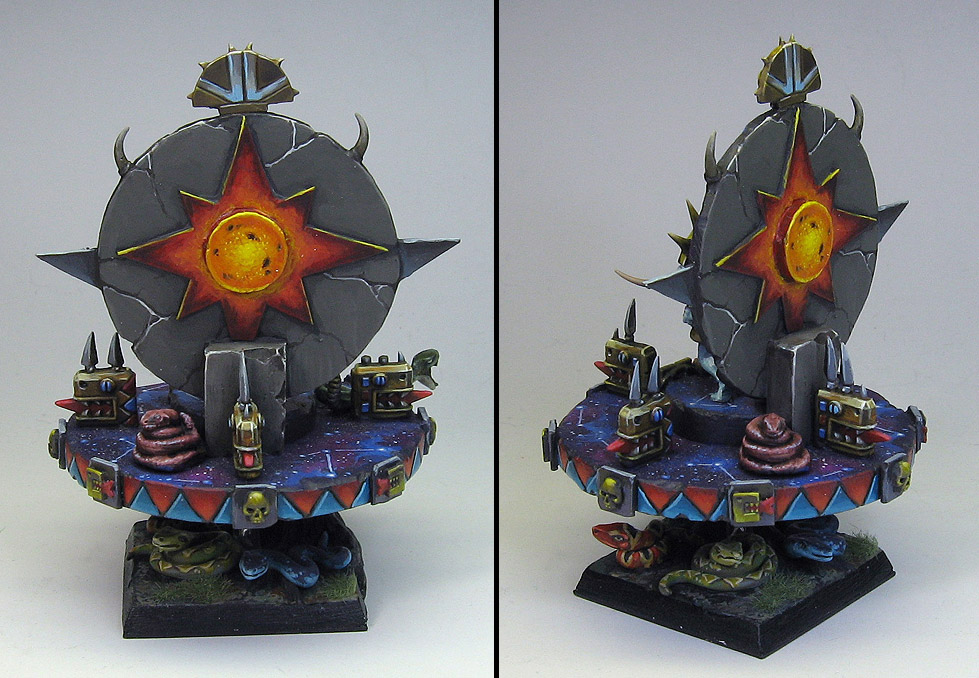 I added a few other bits, and then a modified old edition skink as the 'Baby Mage Priest' 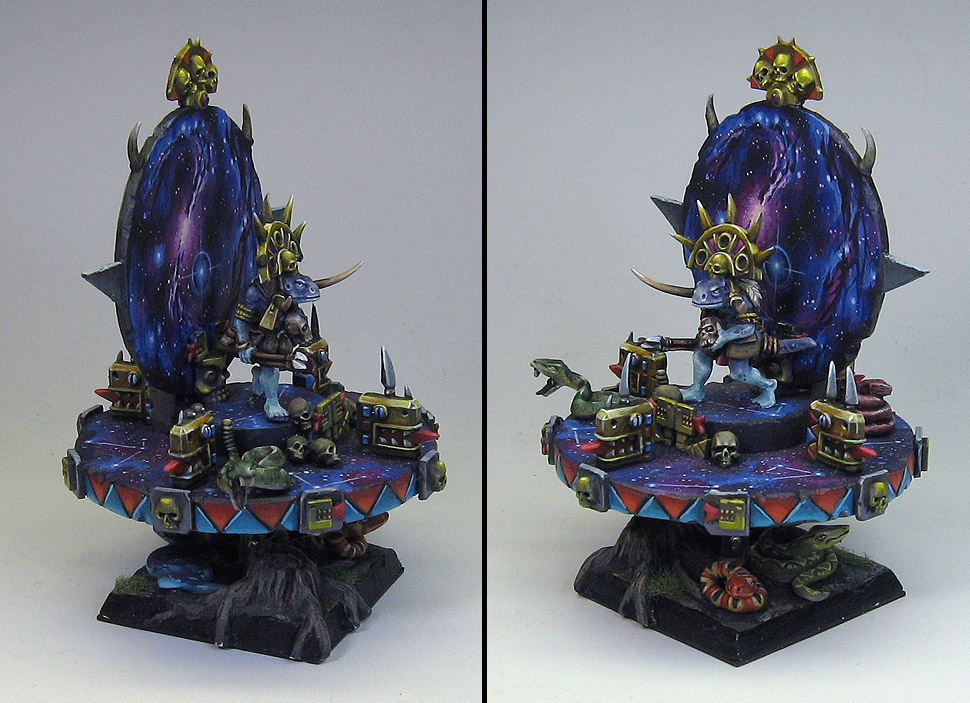 I loved creating the star map on the floor of the palanquin! 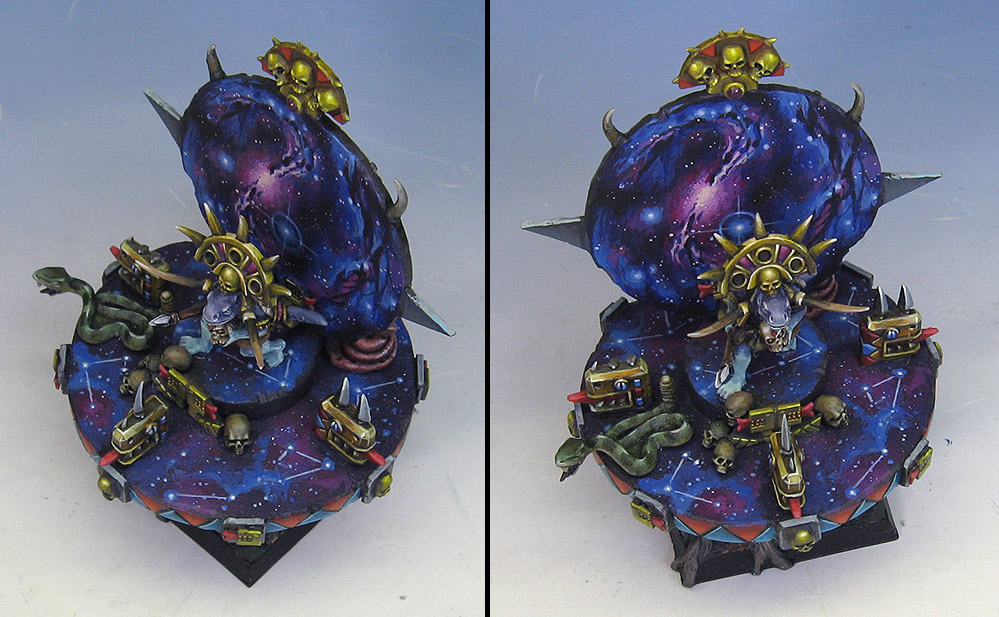 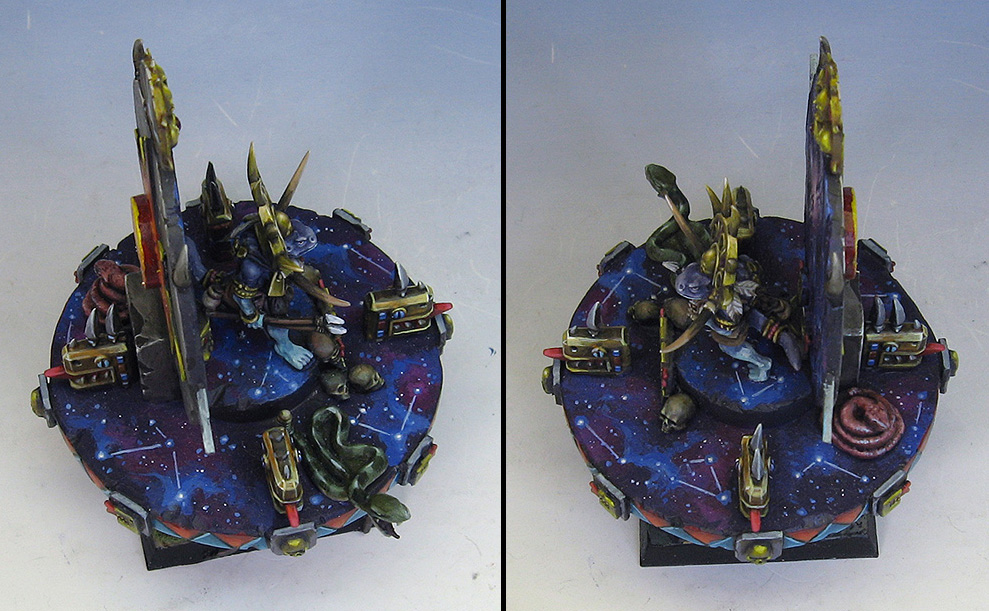 And some images before painting: 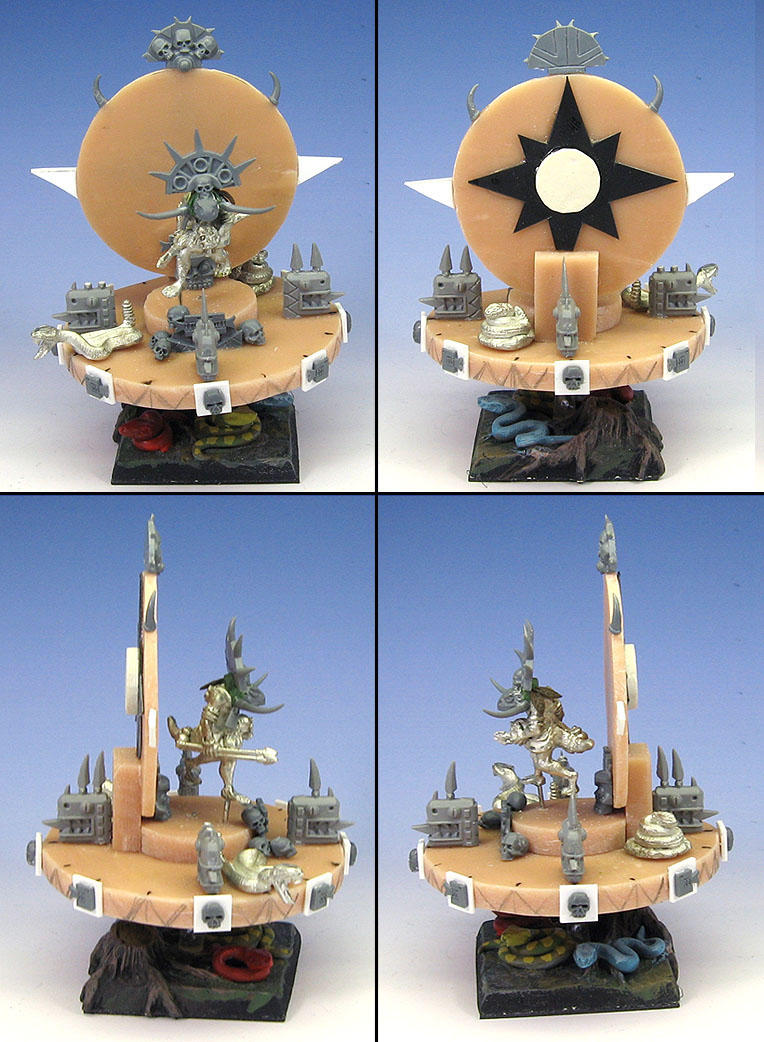 Here's a video that was shot years ago at a tournament.  It was brought to my attention again by the folks at Parti de Protection Des Hommes Lezards: