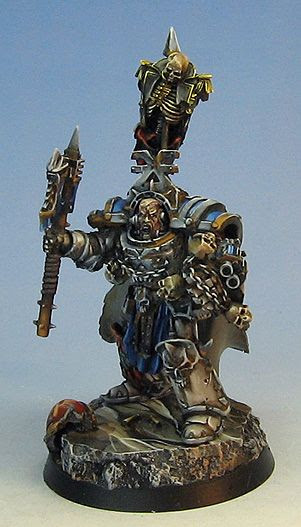 This is a somewhat basic conversion I did of a Zhuphor figure a while back.  The positioning of the cloak made is particularly difficult to sculpt the shoulder pads! 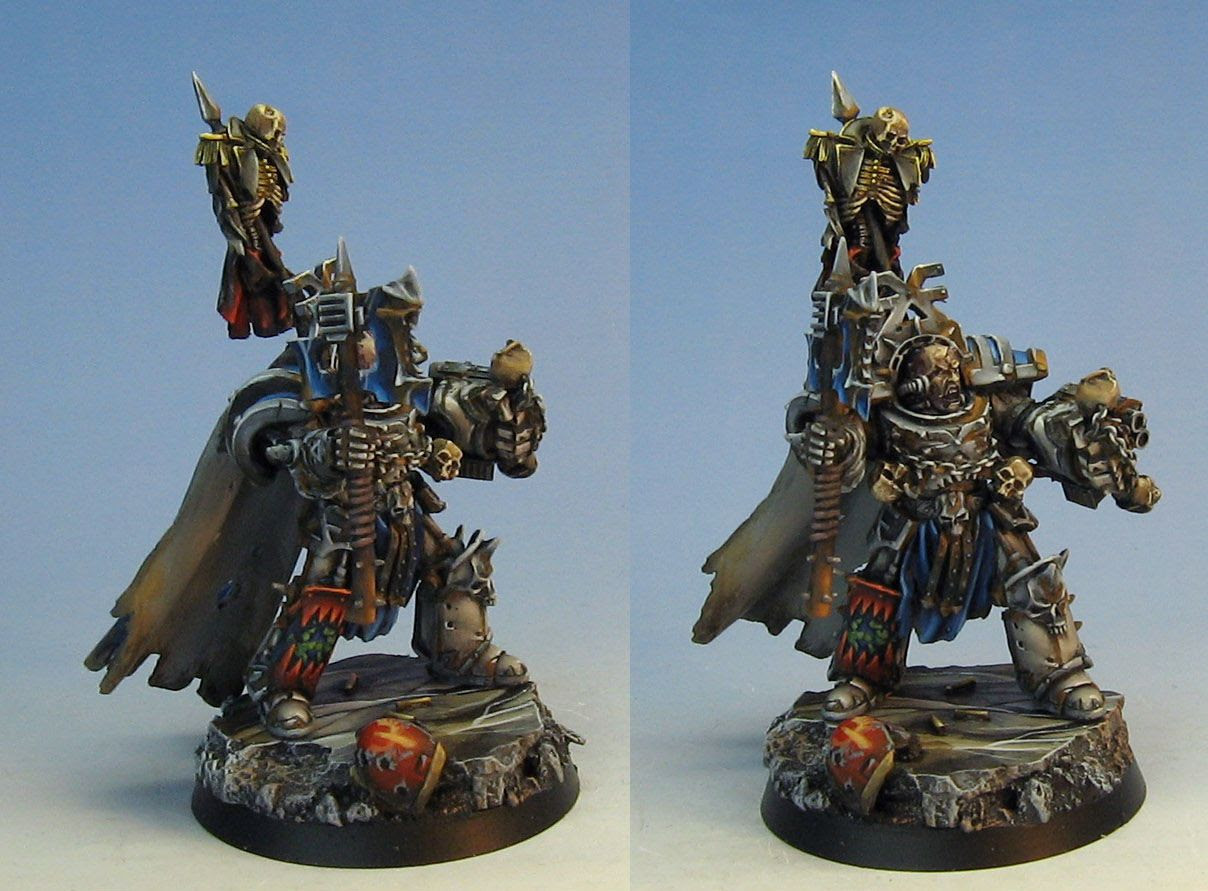 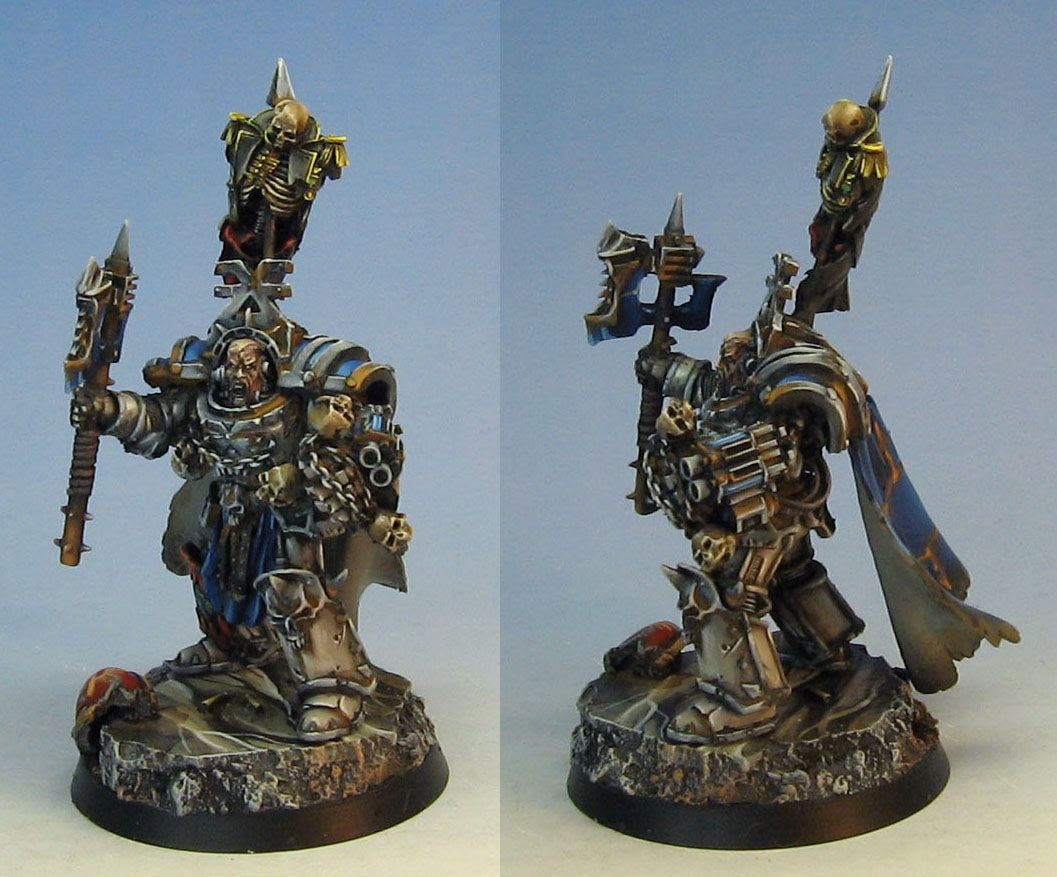 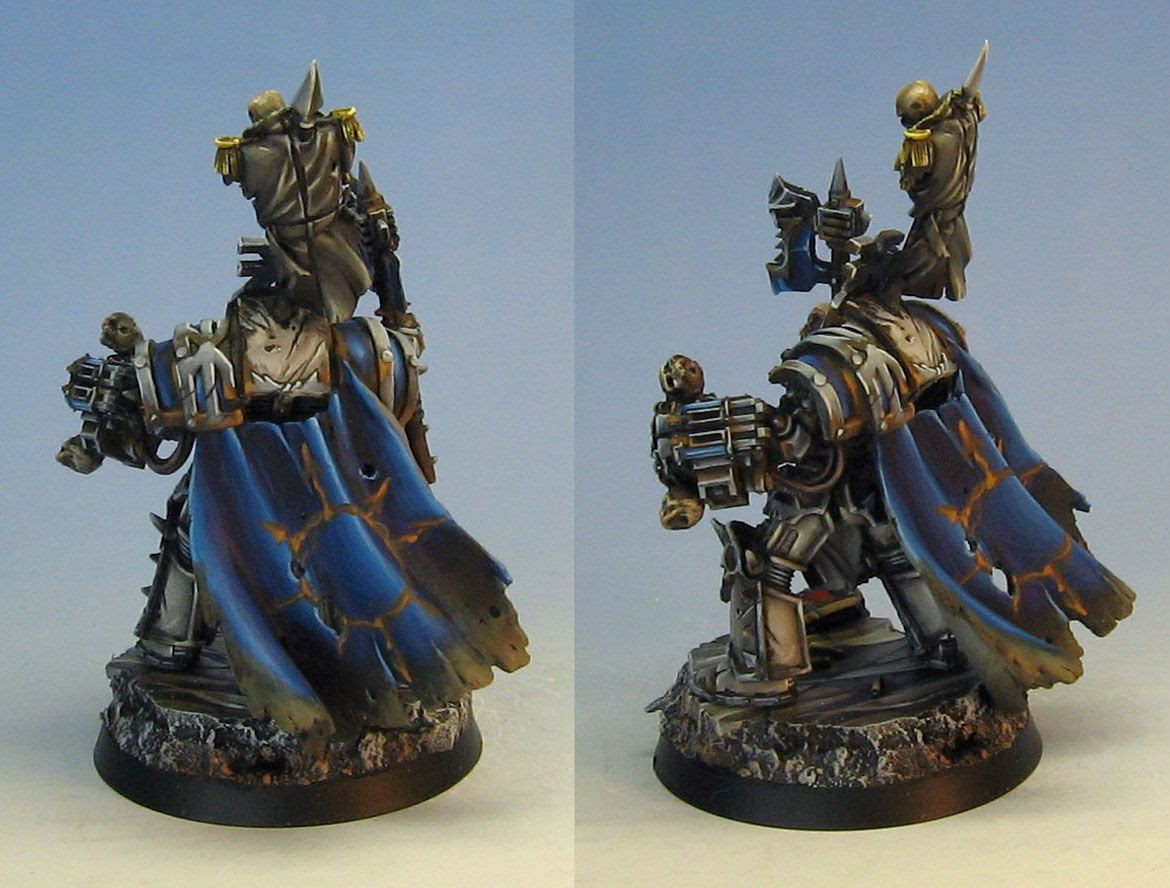 The shoulder pads were sculpted mostly using brown stuff, which really holds and edge much better than green stuff.  Here is a WIP image: 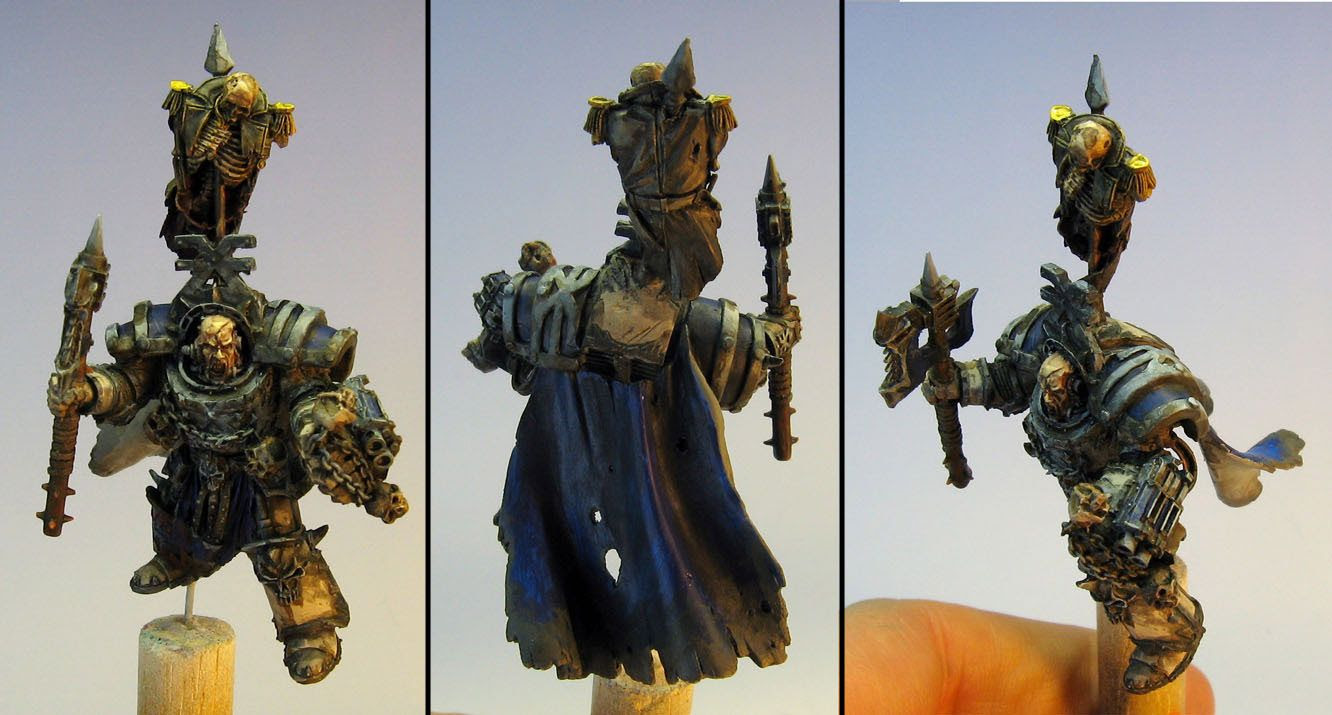 Posted by wappellious at 7:59 PM 2 comments:

Inside a blood bowl stadium 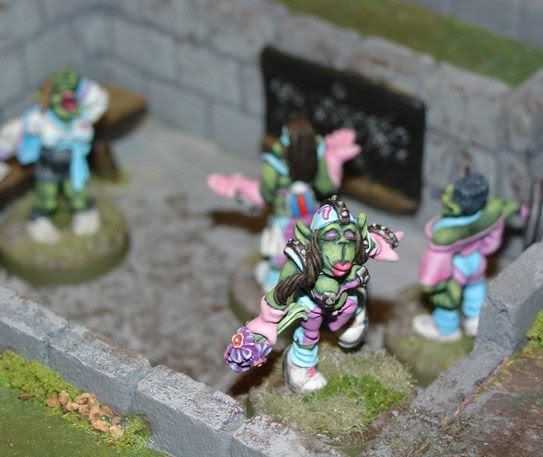 Seeing the pictures of the Shadowforge team made me think of the blood bowl stadium I made for our own league.  This was a very fun project, and we used it for years!

Here are a few overall views: 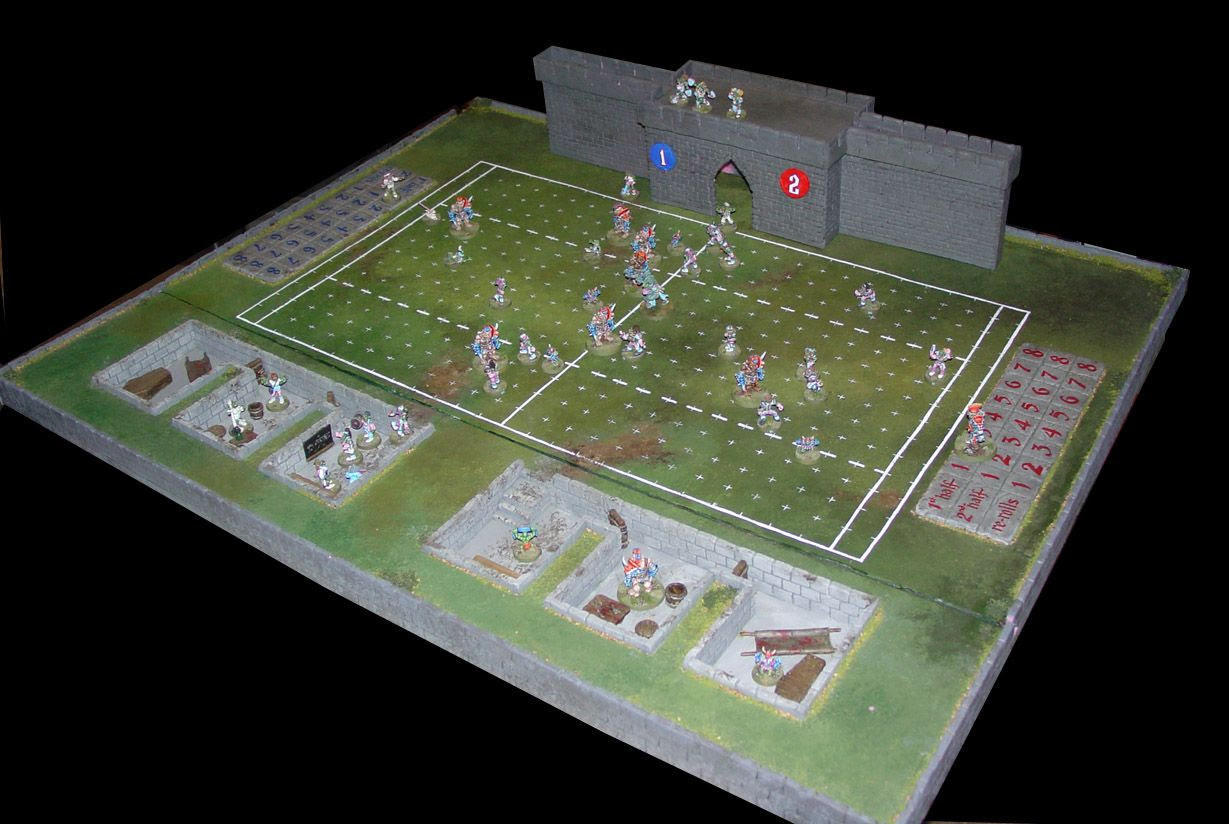 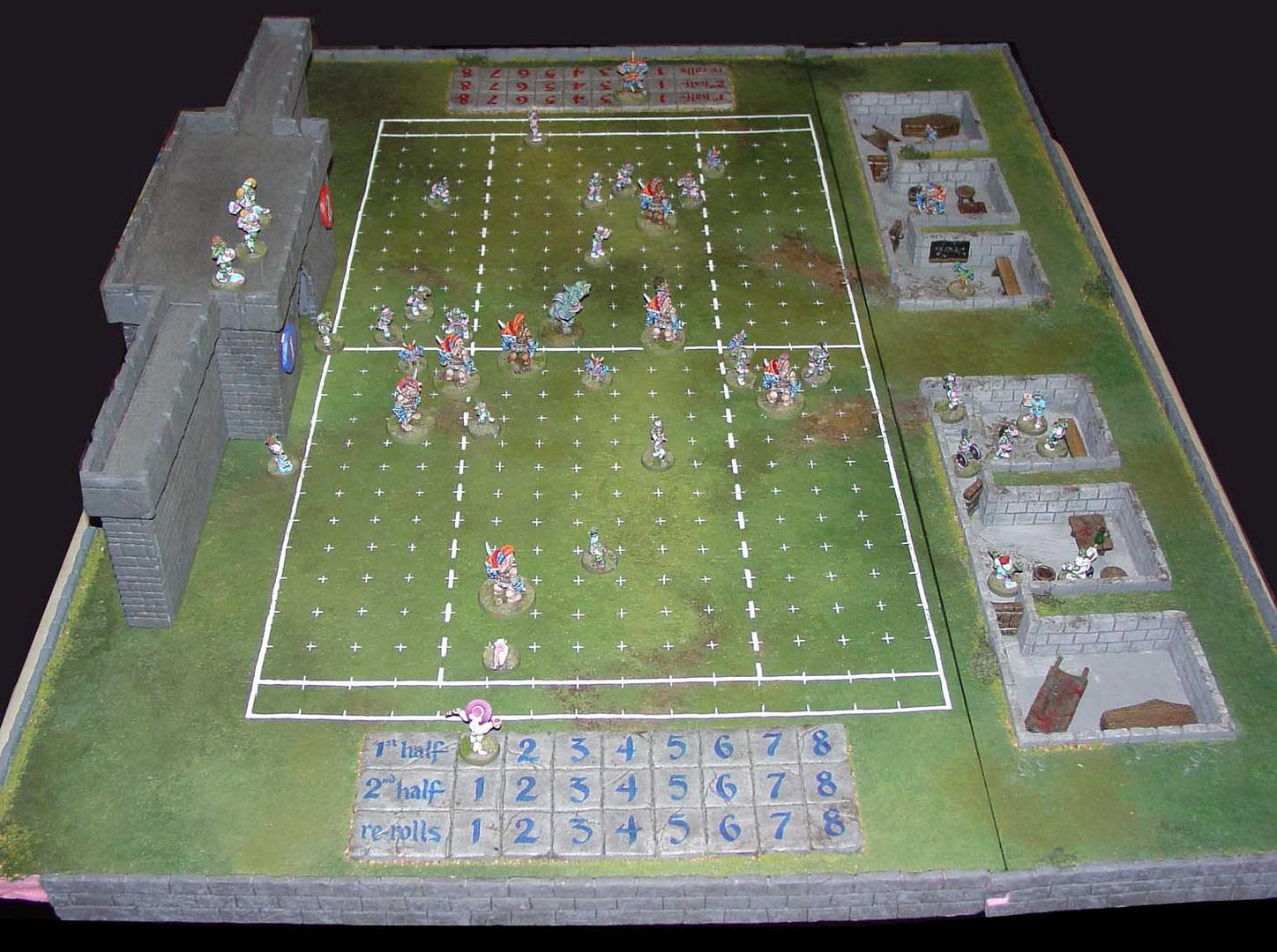 The primary material was pink foam.  This was back in the day when they used to sell thin sheets of it that were the same thickness as foam core.  The think sheets were great, as you could make very thin, more portable single boards as well.  You could even bend it to make curves! 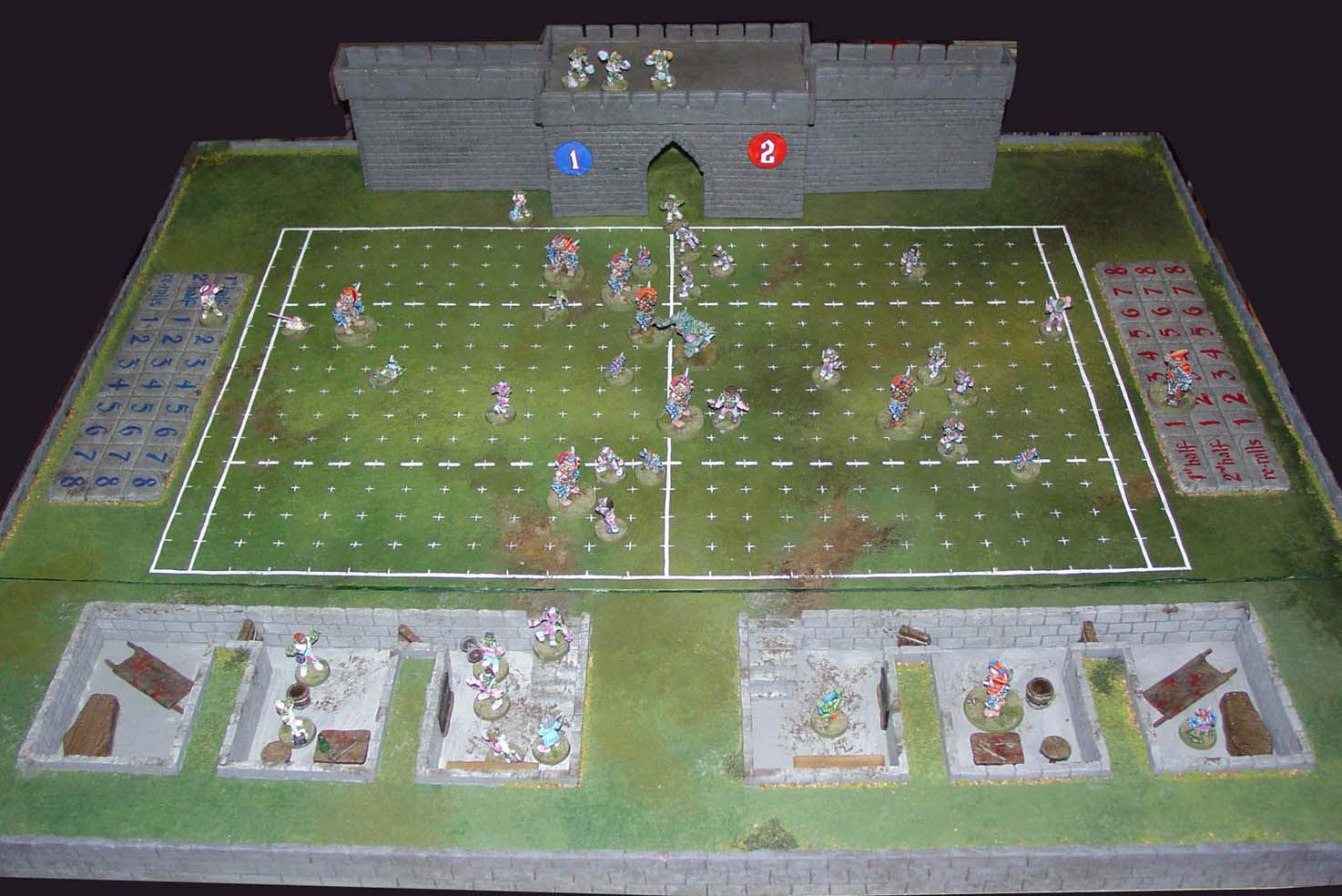 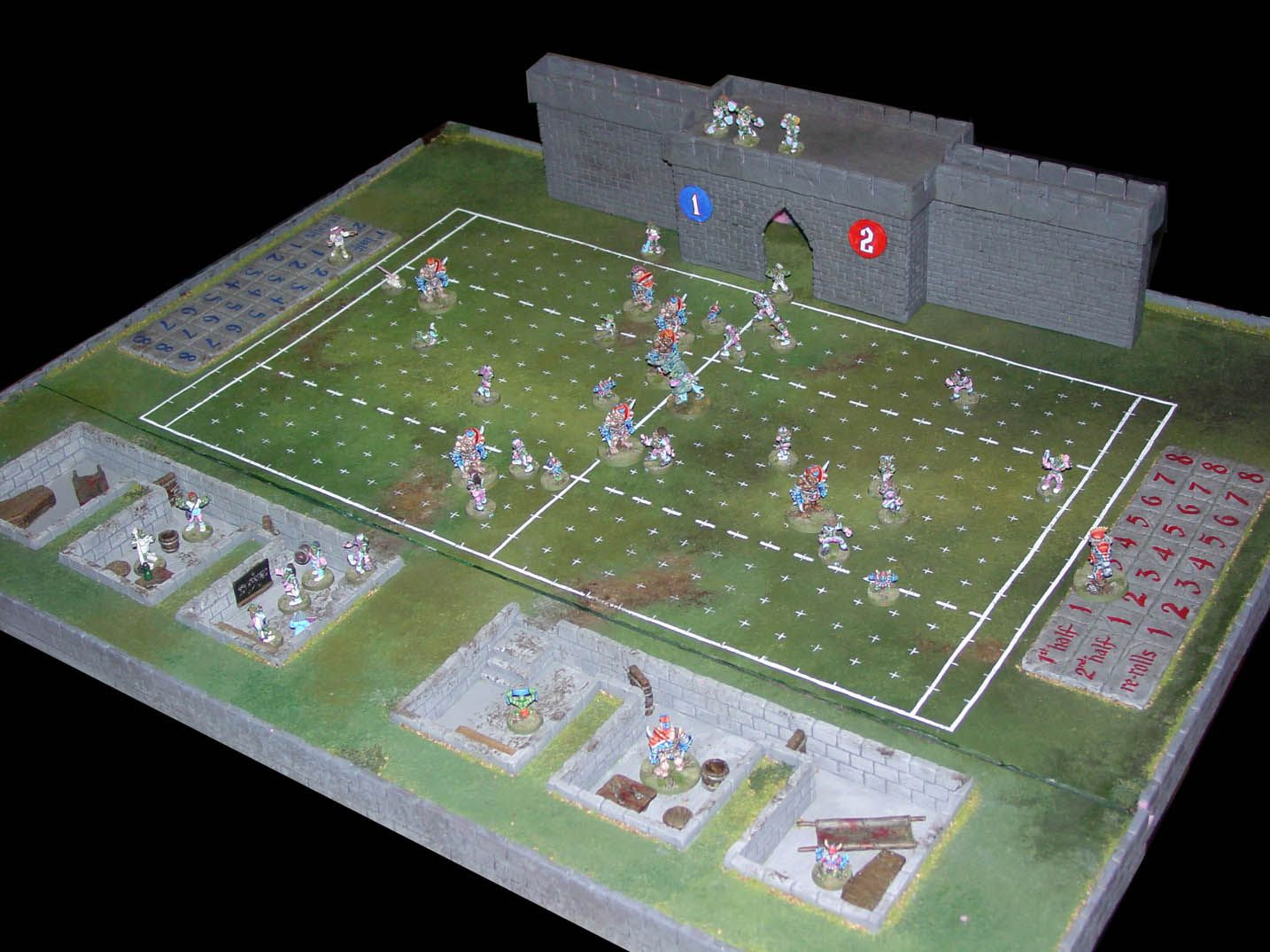 The dugouts were my favorite parts!  I had a blast filling them with all sorts of potion bottles, chalkboards, coffins, etc. 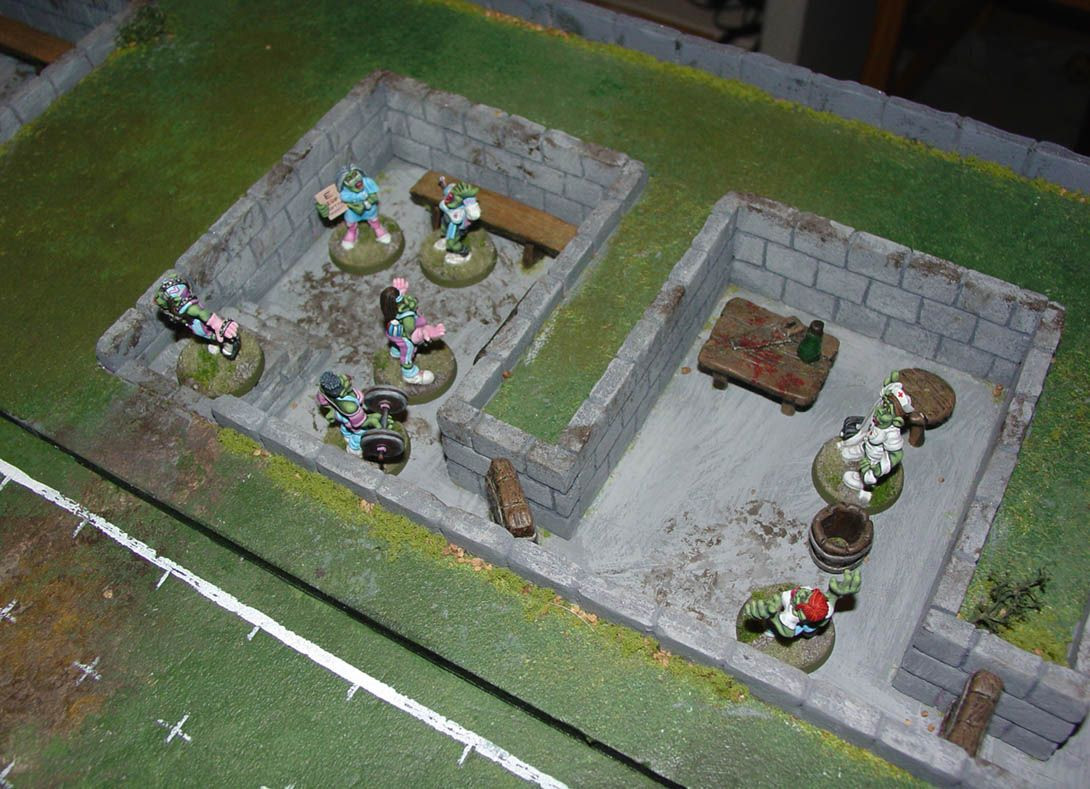 The 3D dugouts are still a lot of fun to use to this day.  Way more fun than the cardboard sheets of a typical board! 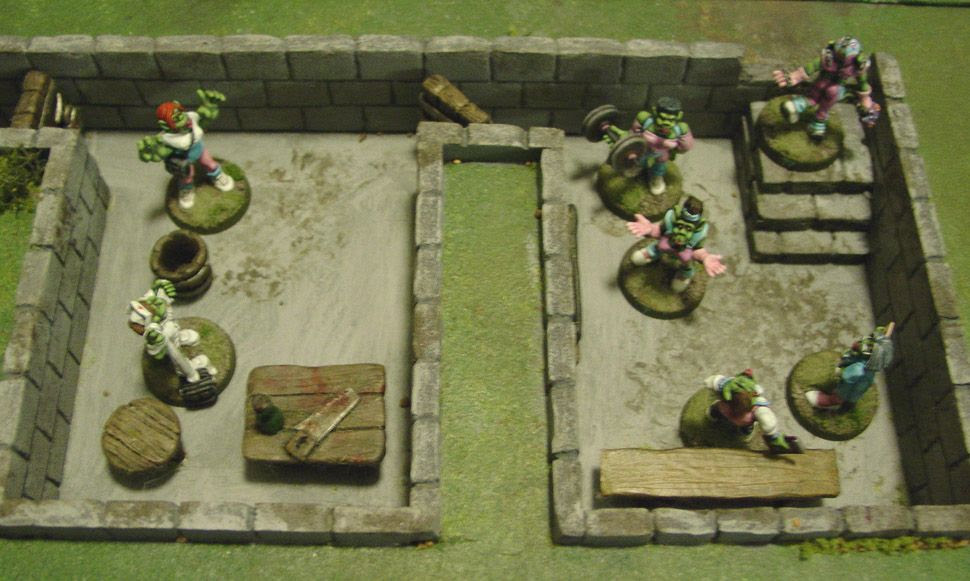 The Shadowforge orcs made a perfect team for this photo shoot! 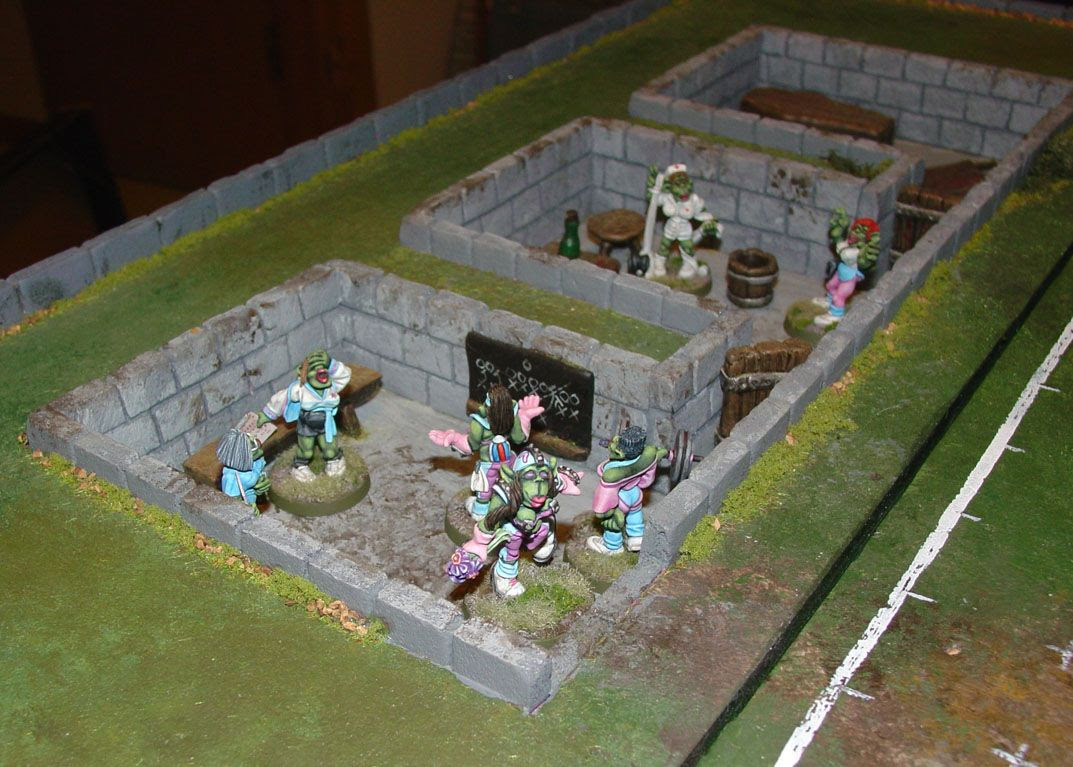 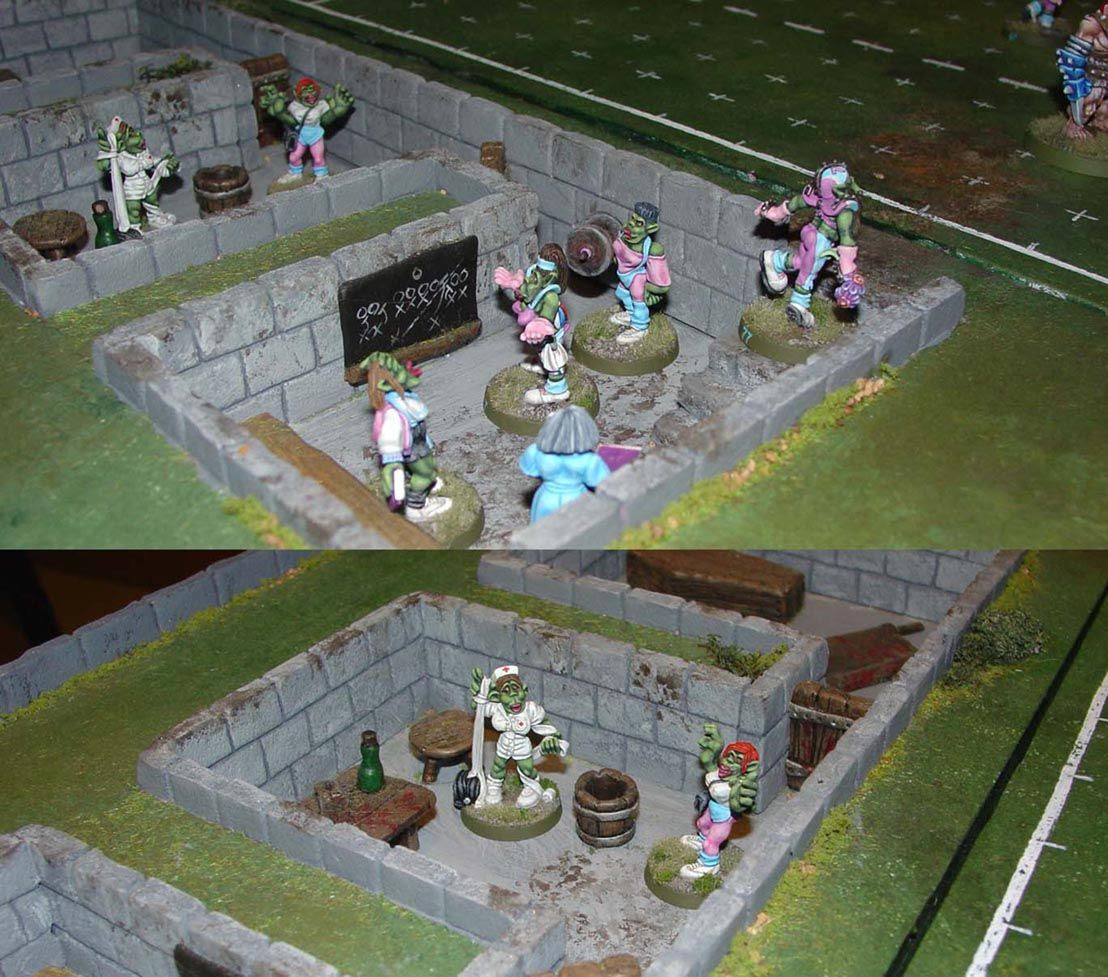 Here we have an action shot on the field... 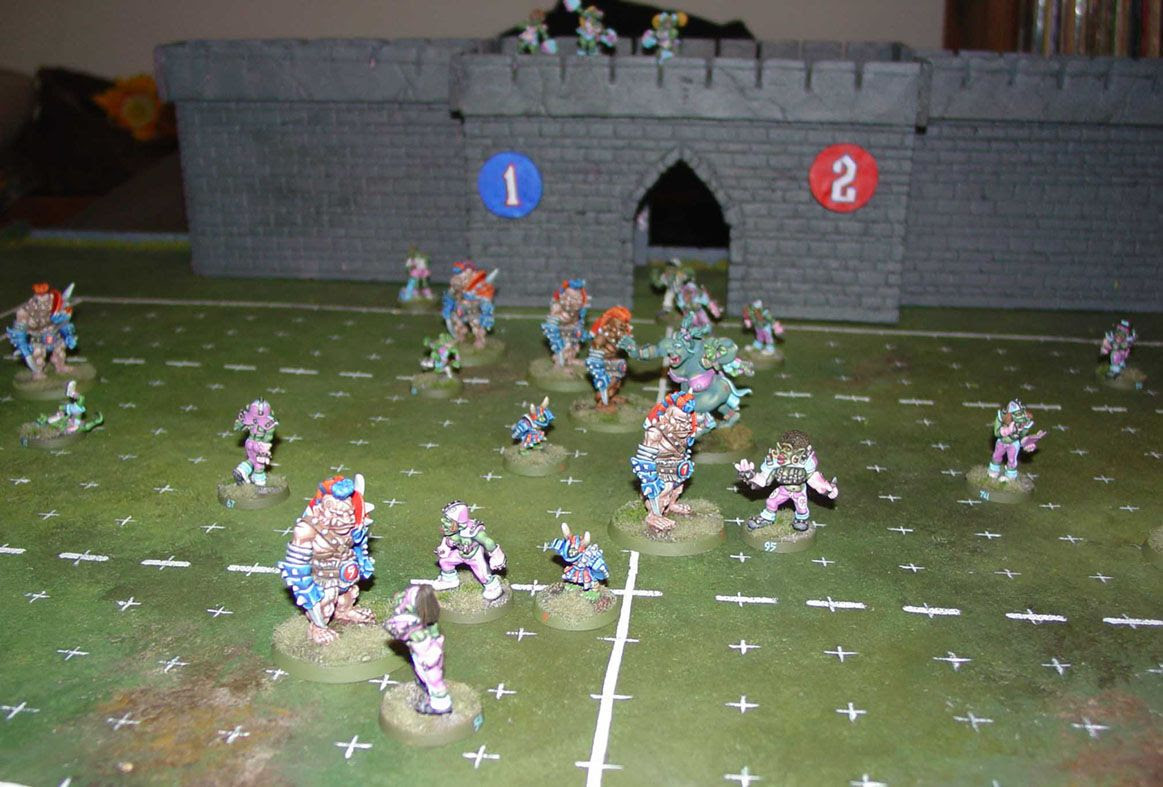 King of the Hill, game ONE 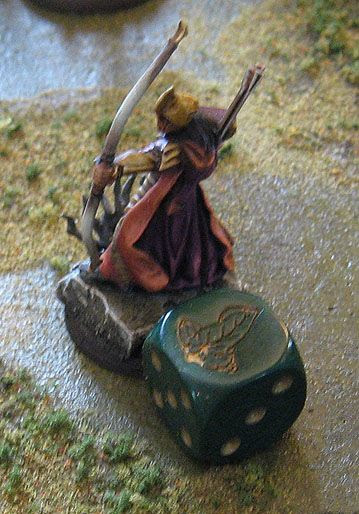 More practice games for the Lord of the Rings tournament!

The first of today's test games was Hold Ground.  We had not tried this one out yet, and it seemed to be the best one on our 4 x 4 terrain board that we made for the Dragon Shoppe!! 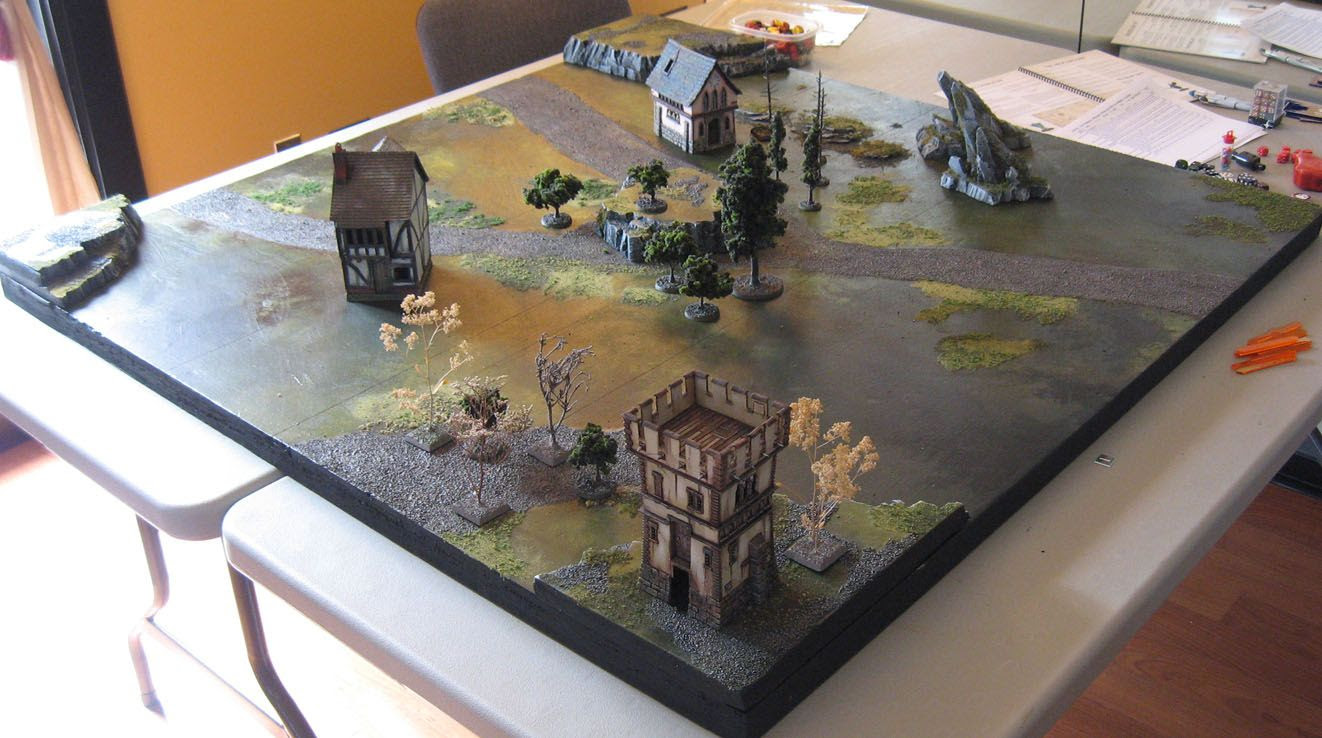 Here's a few shots before deployment.. 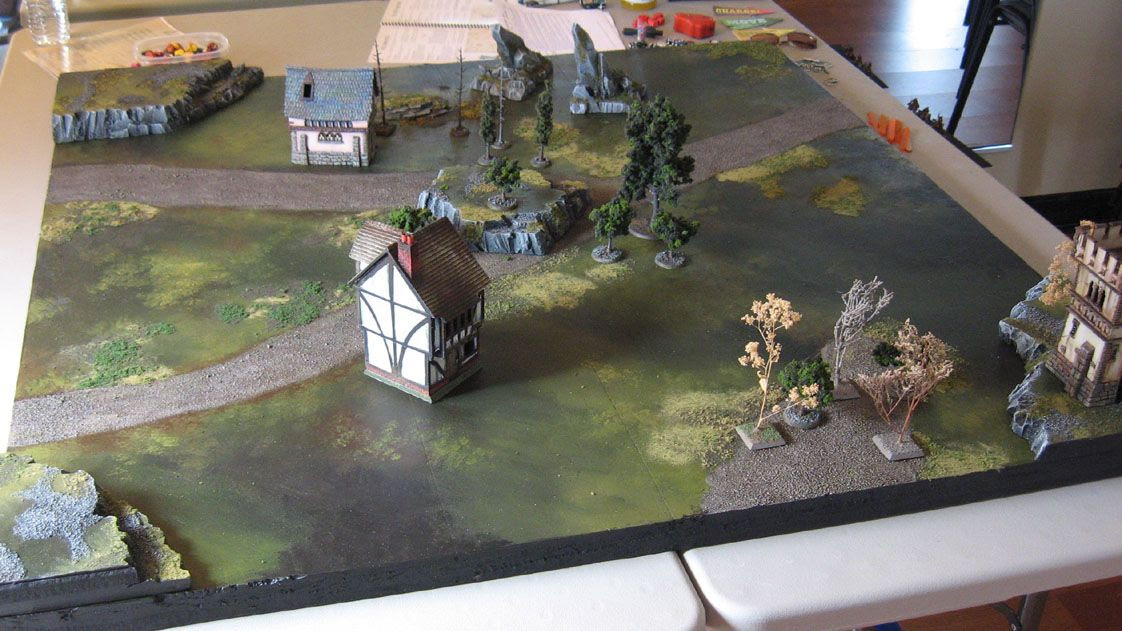 This is the force that I used for today's games. 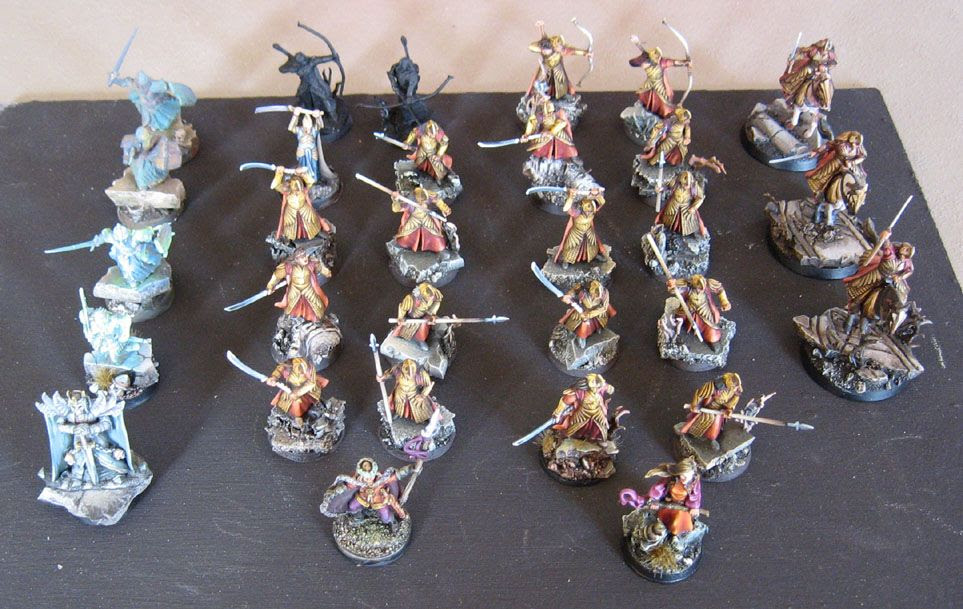 Rich brought out his Harad, since he wanted to see what would happen if he brought a Mamuk. It would not take all that long to find out!  This is our deployment.  As you can see, everything is piled up pretty close to the central hill, as that is about all that matters.  You could pretty much play this on a 2 x 2 board.  It is probably the lest thought out of the new scenarios. 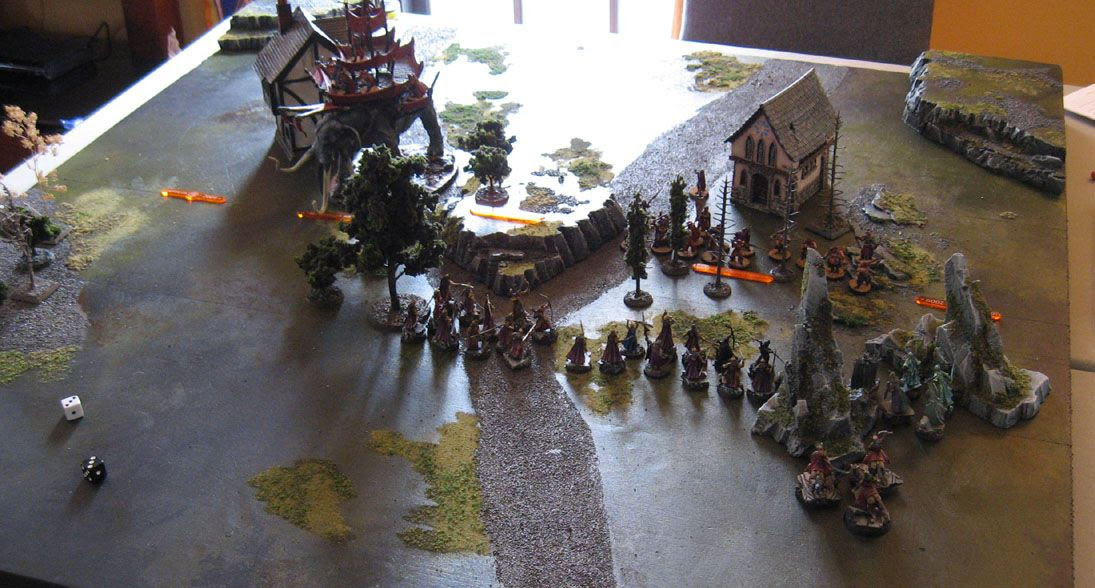 The Mamuk is trying to get in position for an inevitable stomp of the squishy elves. 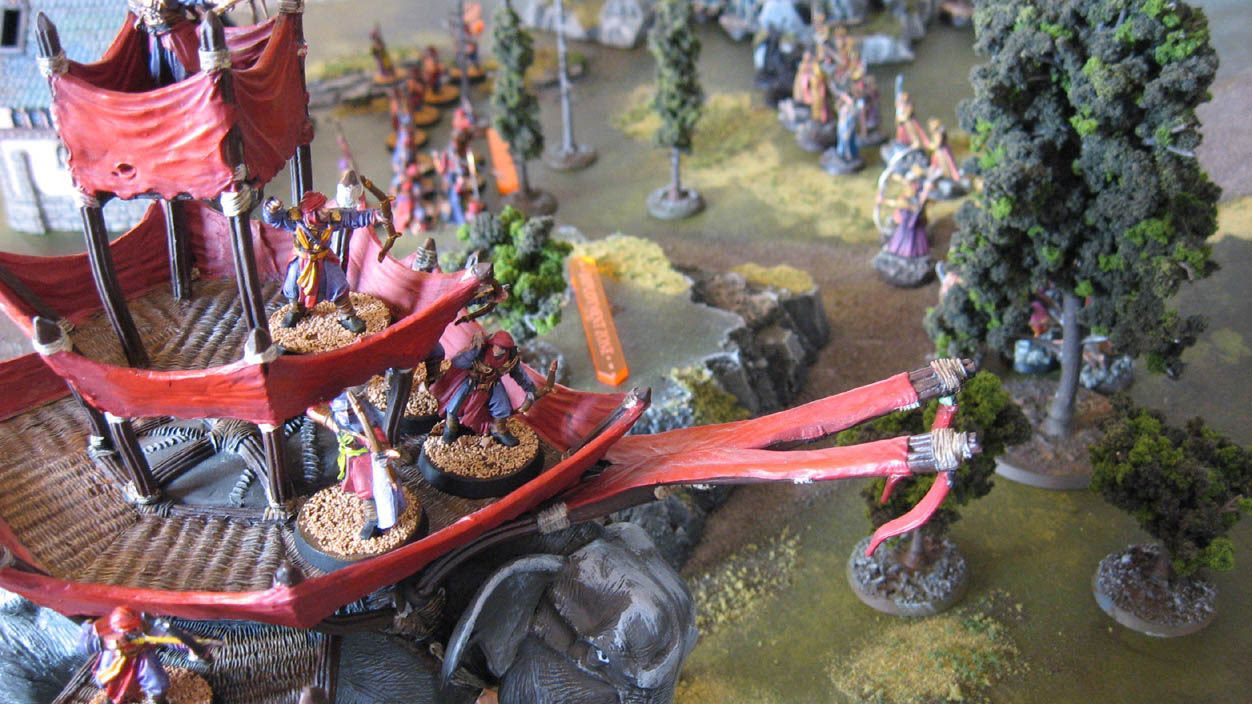 Here you can see the stormcaller has been at work.  Lots of Harad on the ground! 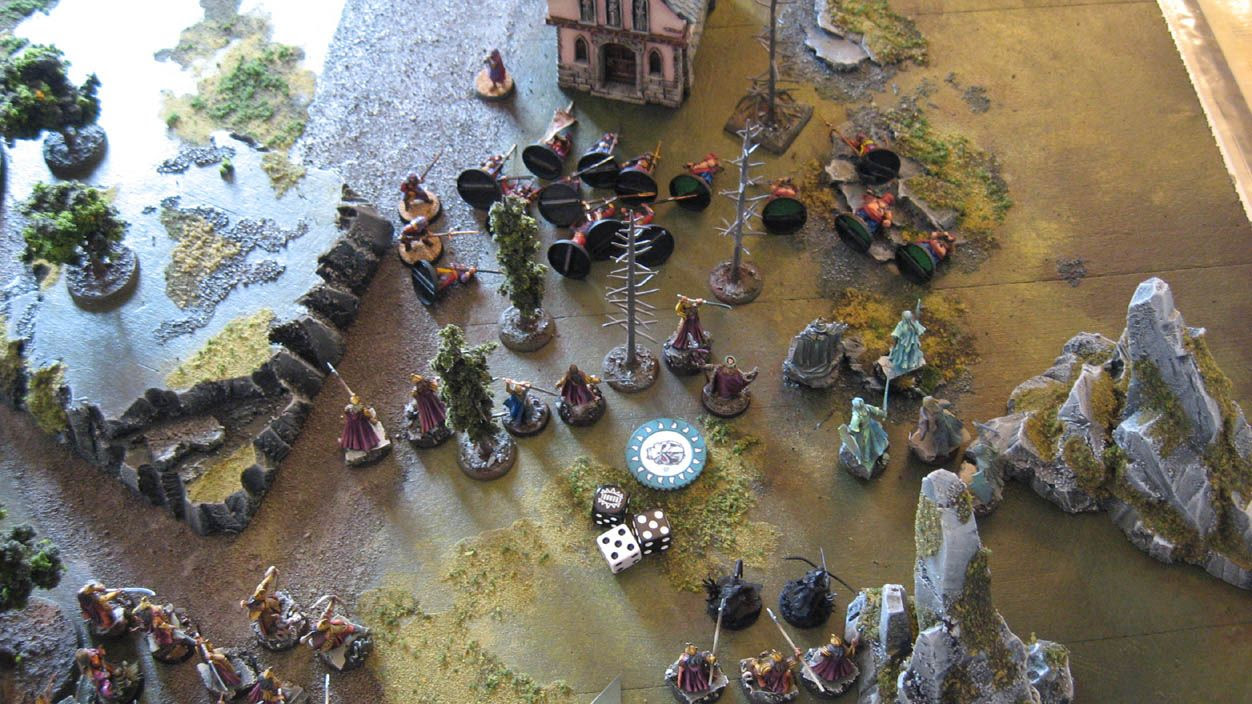 I try to position the elves to make the best use of the Nature's wrath spell, moving the elves through the forests to hammer the hapless Harad.. 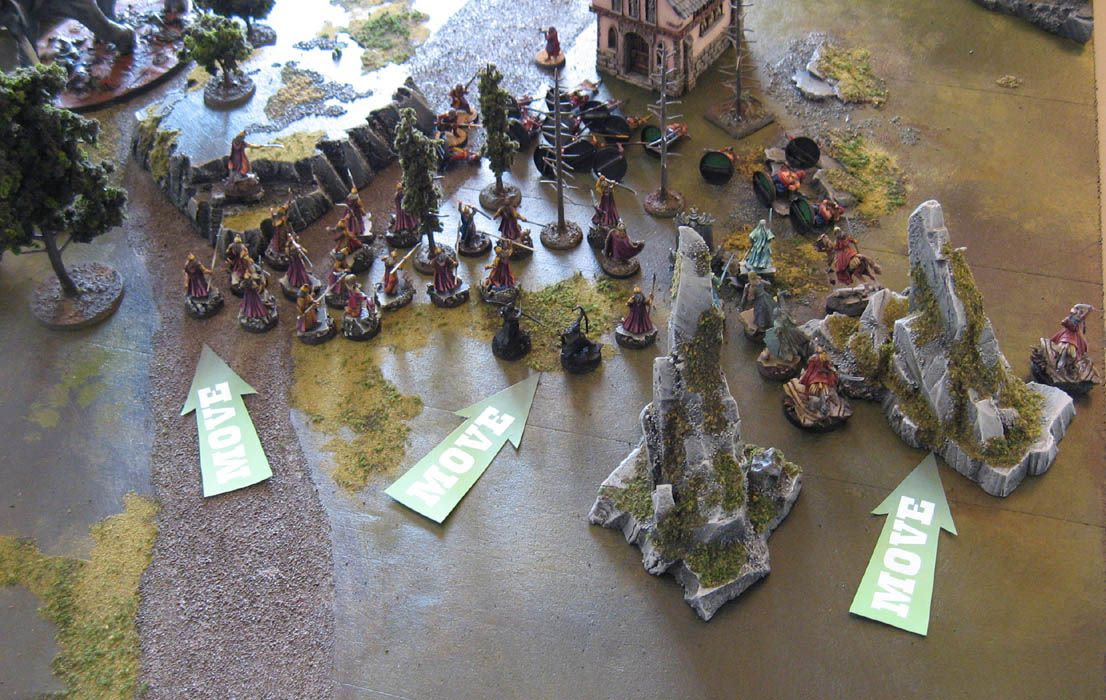 We almost never tied for the priority roll all dy, so there were not many turns with no shooting due to the "high winds".  However, the Stormcallers continued to roll 6's for their spell, and Harad were constantly on the ground.  The Mumak was the one real hope for the Southlanders... 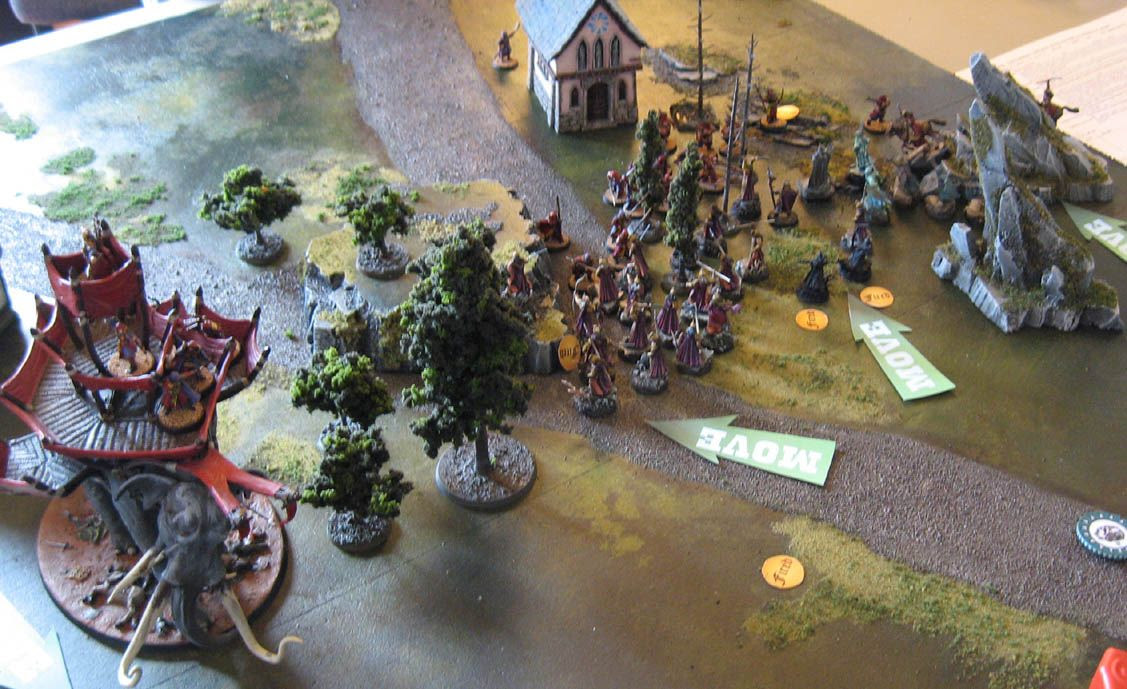 This is a portent of the killing spree to ensue on the downed Harad... 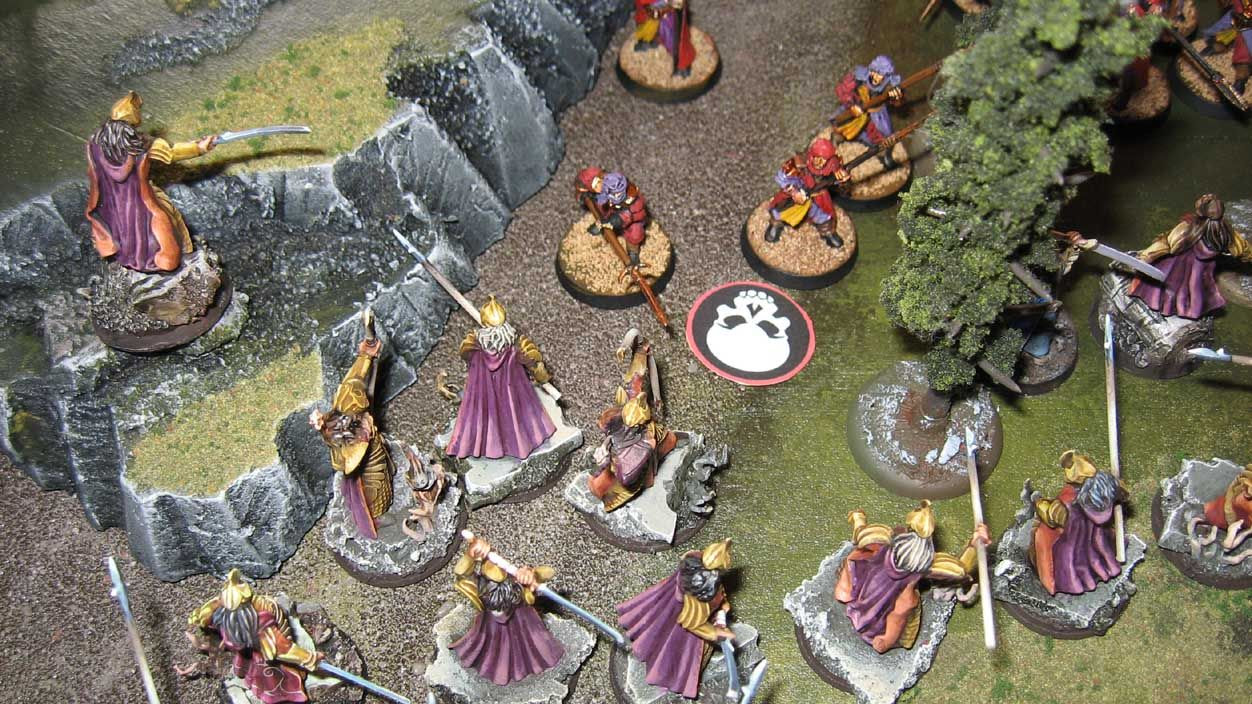 The high fight skill of the elvse was quite lethal in these combats.  Since so many of them were engaged, there was not much for the archers in the howdah to shoot at... 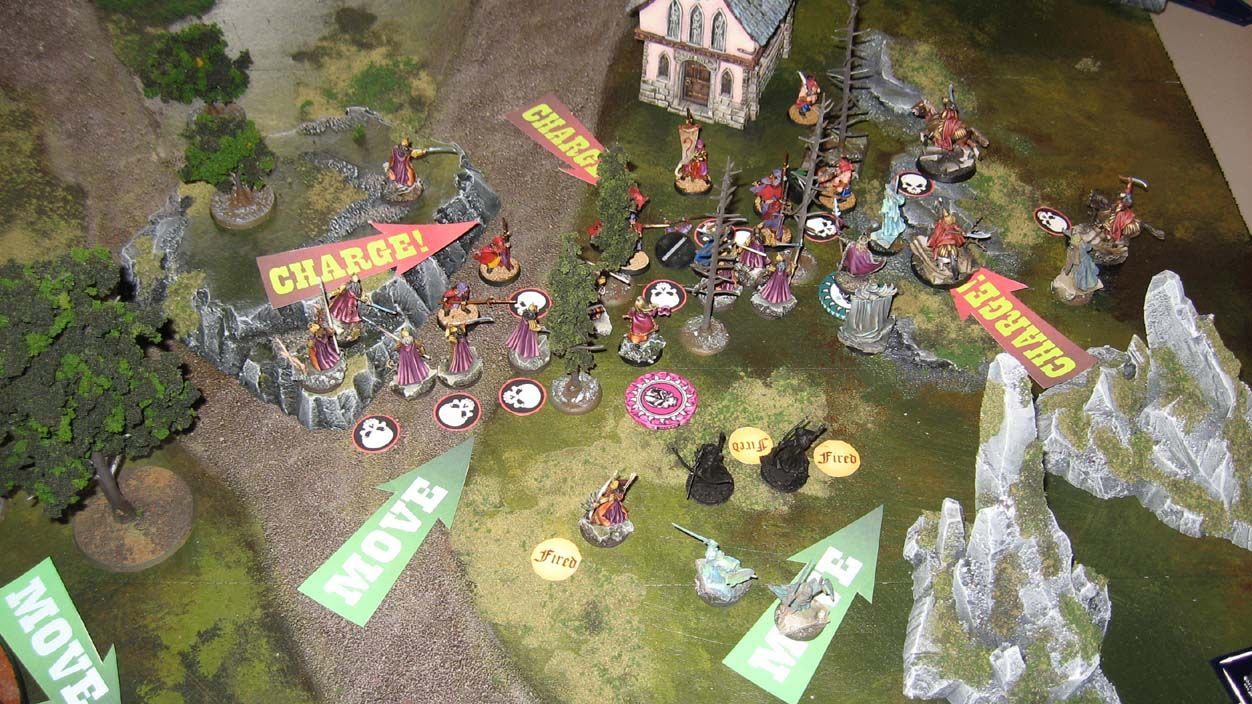 More Nature's Wrath, more Elf charges, more Dead Harad.  And this is just the end of turn two!  It is looking bleak for the Southlanders... 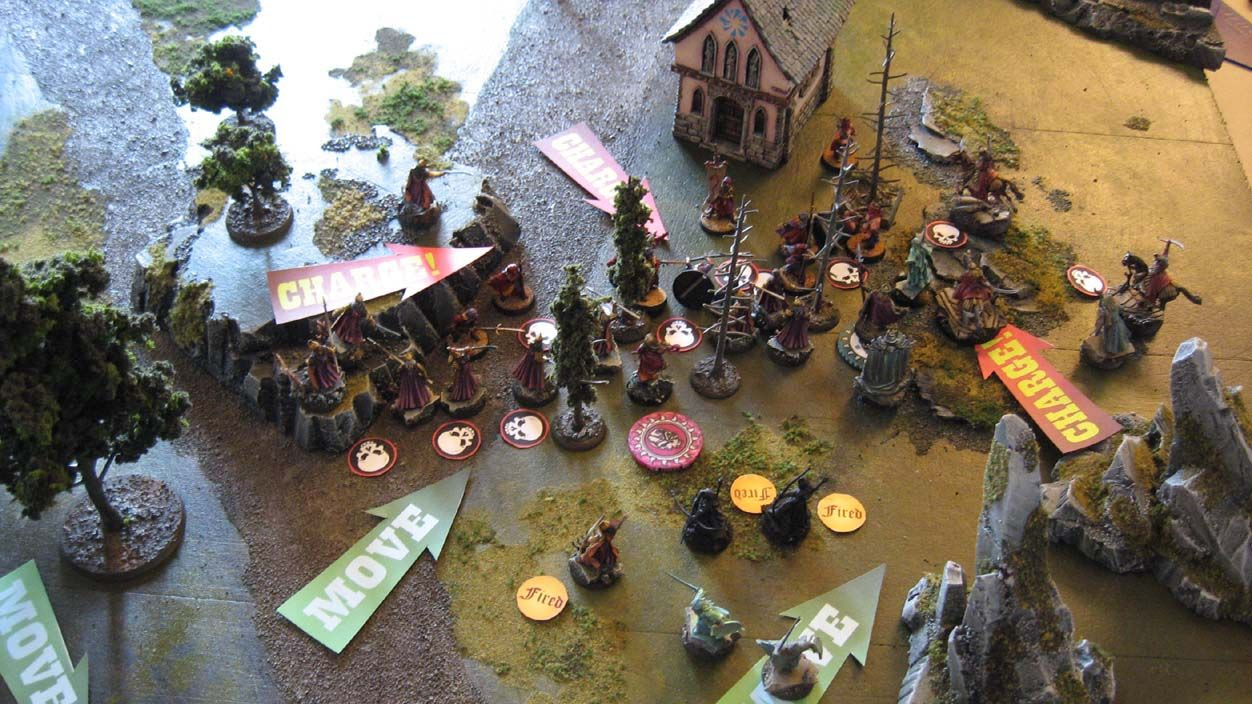 This would be the straw that broke the proverbial camel's back.  One of my archers was lucky enough to wound the Mumak itself, creating a courage roll.  Rich's newly purchased dice came up double '1's, giving me control of the big beastie! 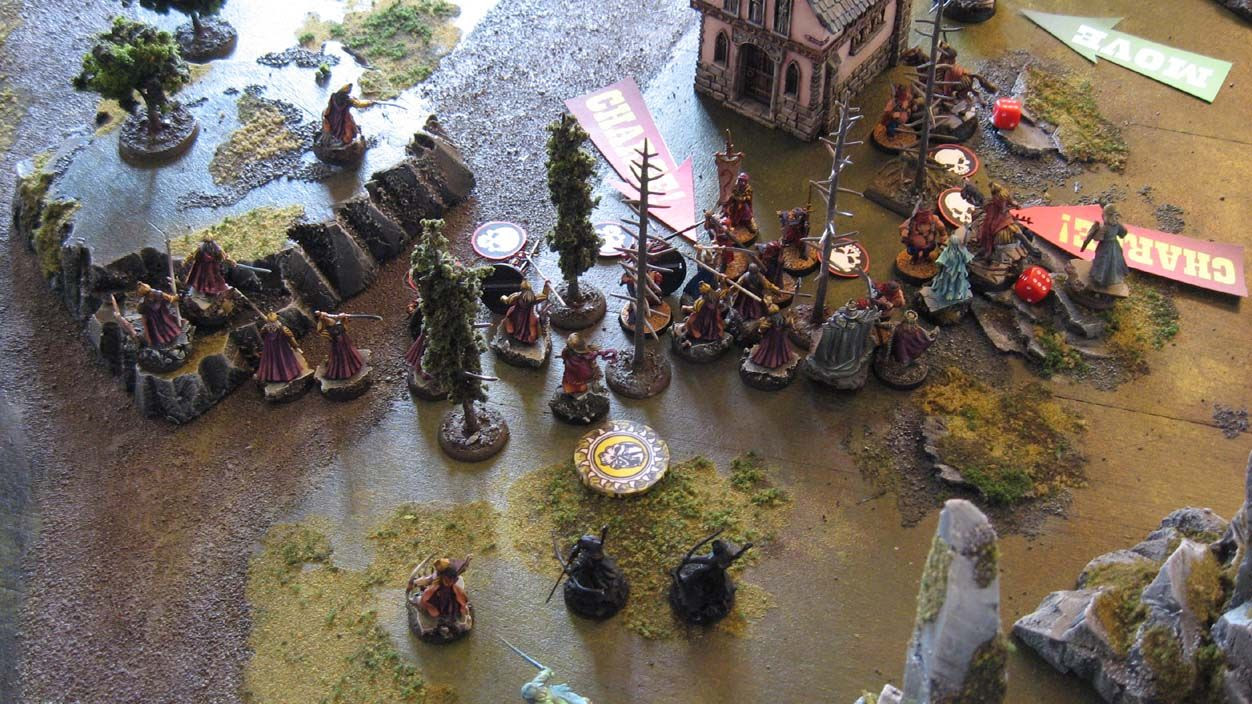 So, with control of the great beast, I sent it far from the central hill, also preventing any of the archers in the howdah from shooting.  With the Elves beating up on the Harad near the hill, that was about all she wrote. 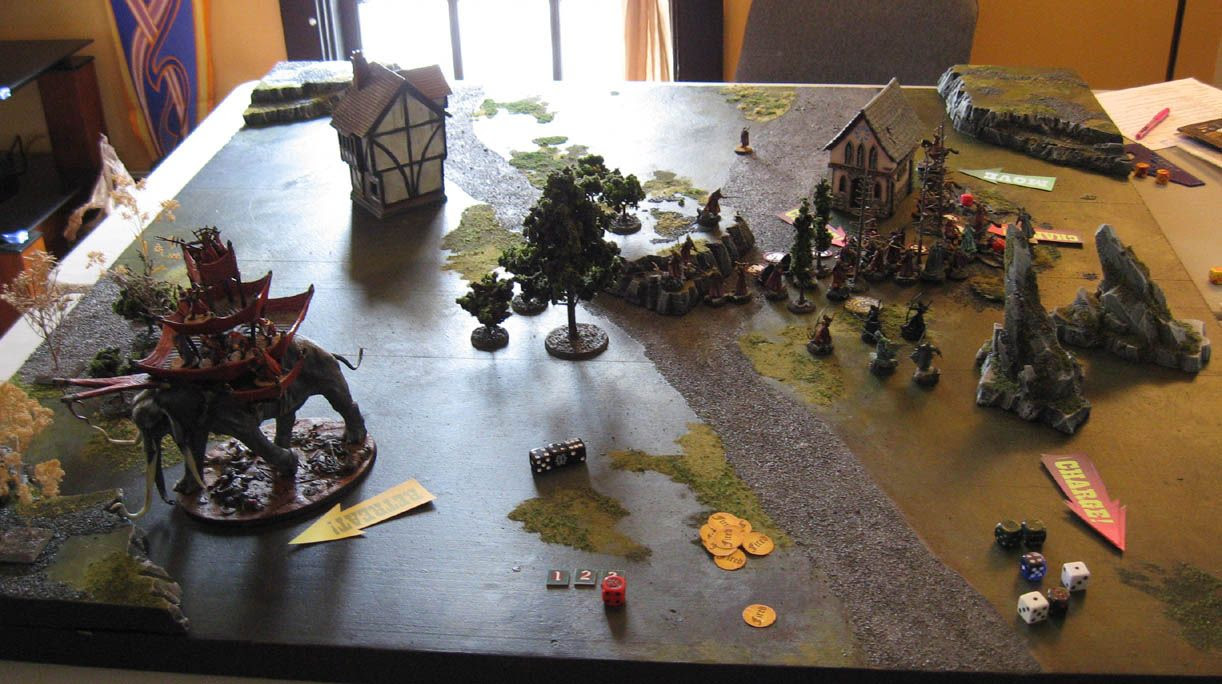 Of course, when the stormcallers keep rolling 6's, life is pretty easy.  The next match (same scenario, different Harad list) would show what happens when things don't go as well for the Elven mages!

The wound on the Mumak made me question even more the Army of the Dead as a viable choice in the 'new' game.  They had been doing worse with each test game, never attaining the intended purpose as road blocks and combat partners for the sword elves.  Even with that high defense and shielding, they still would die to mere 6's.  The next match would also show how terror is mostly useless against evil as well.

Stay tuned!!
Posted by wappellious at 4:54 AM No comments: