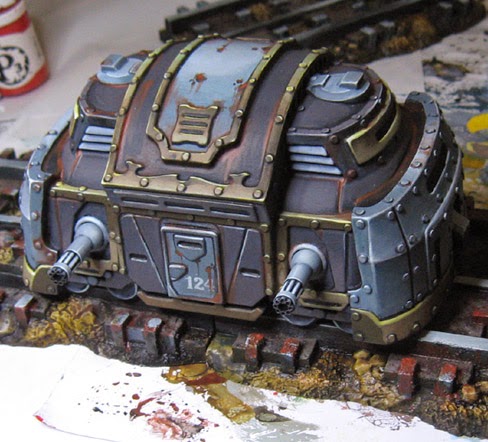 Hmm... I guess more than one person from Illinois has earned that nickname ;-)

Proceeding with the glazing of the rail sections, I had to take care of the railroad ties.  This was the trickiest part, since the color had to be a different hue from everything else (in this case slightly more reddish) but not hamper the light and dark patterns of the rails and the ground. 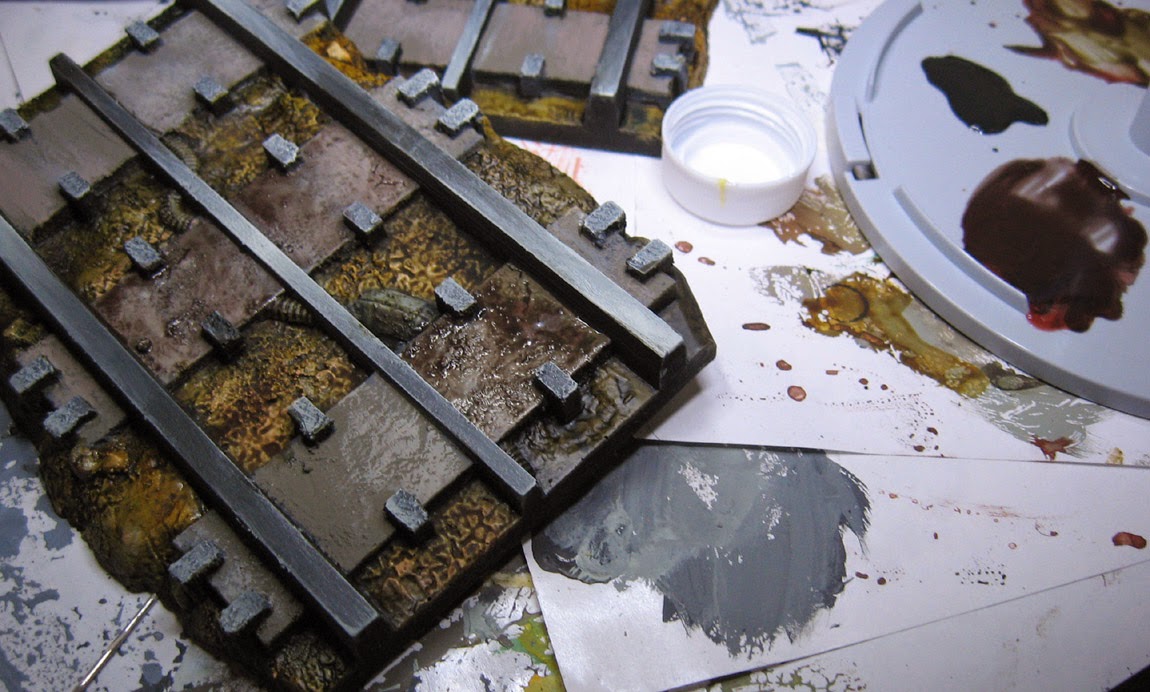 You can see, as with other glazes, that I emphasized more darks around the highlight areas of the rails, and the ground.  I had to constantly be aware to shift those values quickly, so that I did not have "dark next to a dark", etc. 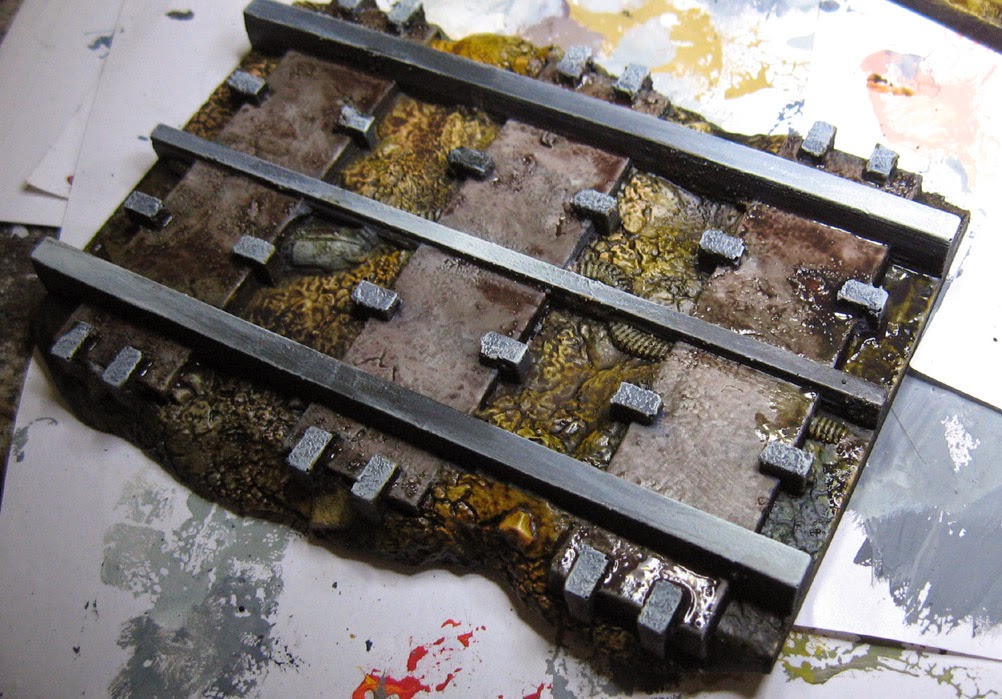 The meant at times that I would use my fingers to wipe away some, or a very soft tissue. 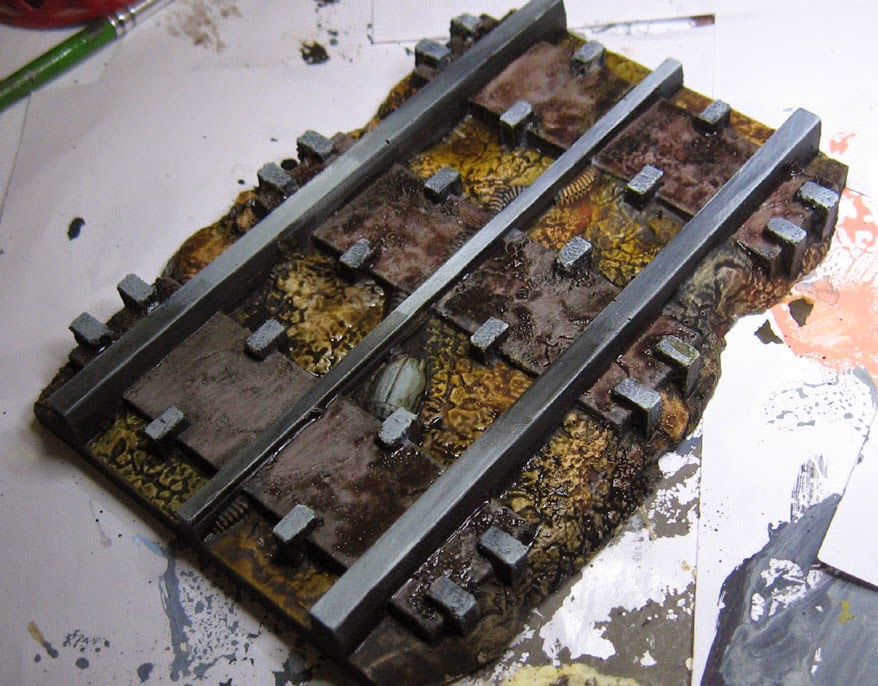 You can see the difference.  Also, keep in mind that a few subsequent layers of rust and dust will be added to this! 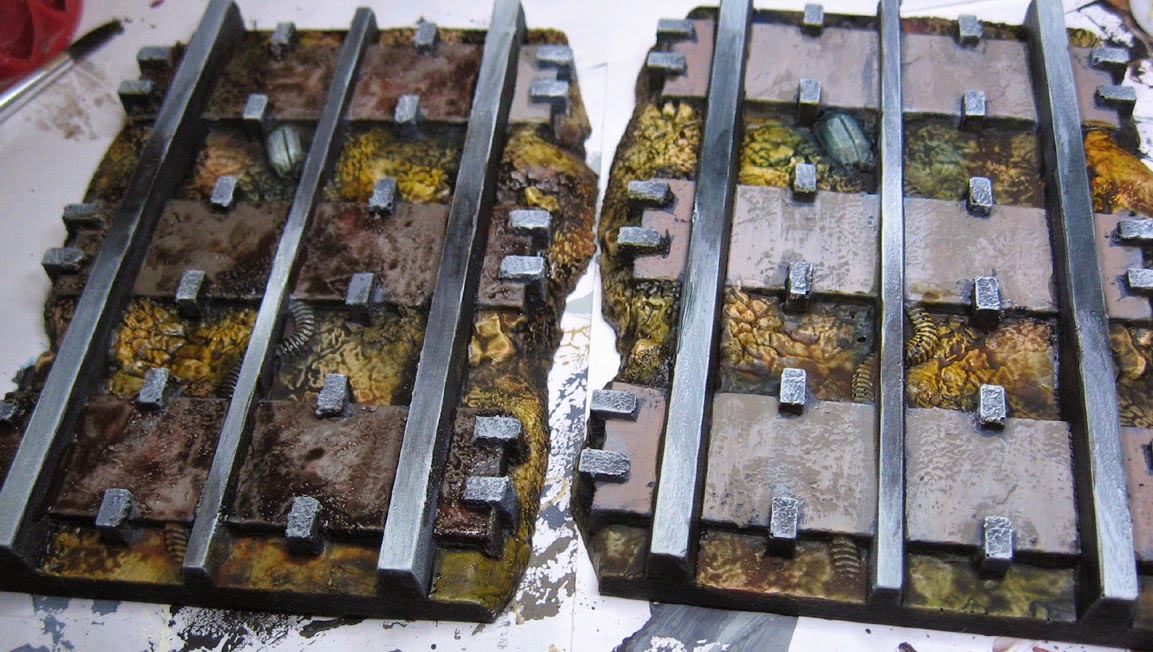 Eventually all five sections were ready for preliminary rust treatments. 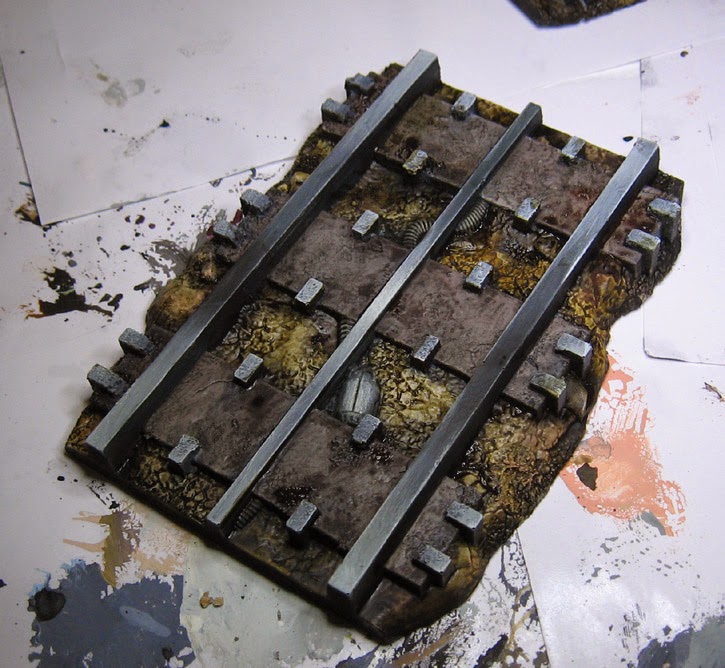 A few Secret Weapon washes were used to keep the mixtures flowing, while still adding some color.

I would work many different rust colors into the surface, some lighter, some darker. 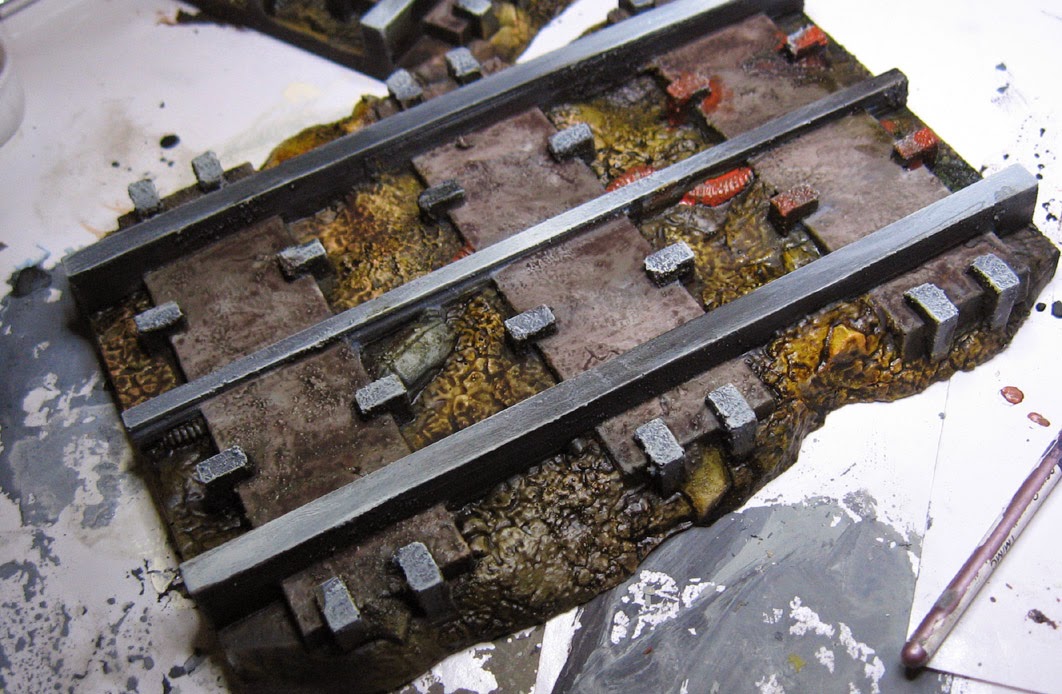 Most of the rust effects would be concentrated on the spikes and the power conduits. 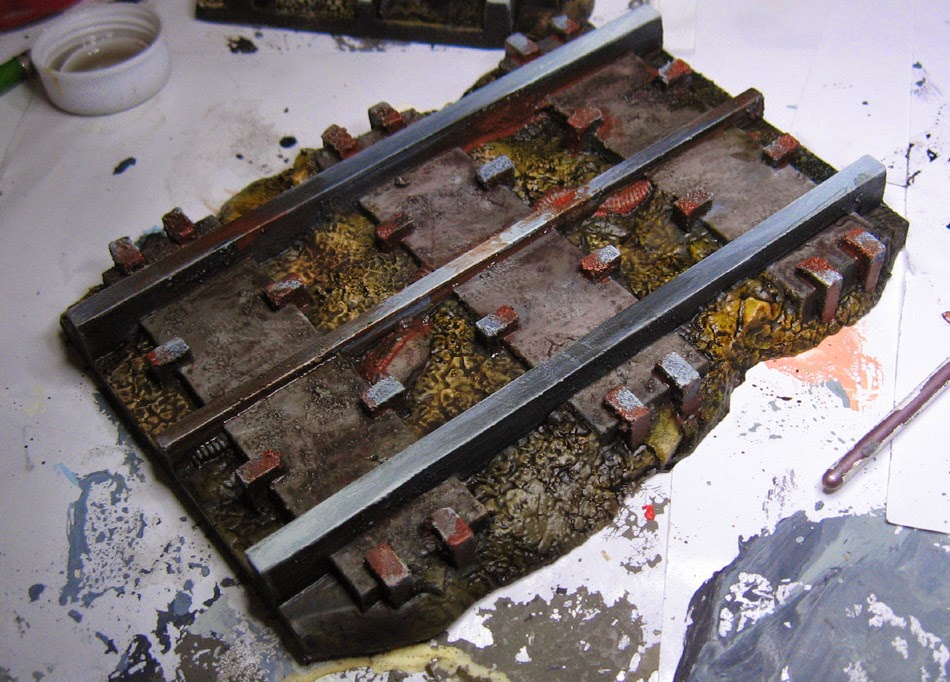 Rails at the ready! 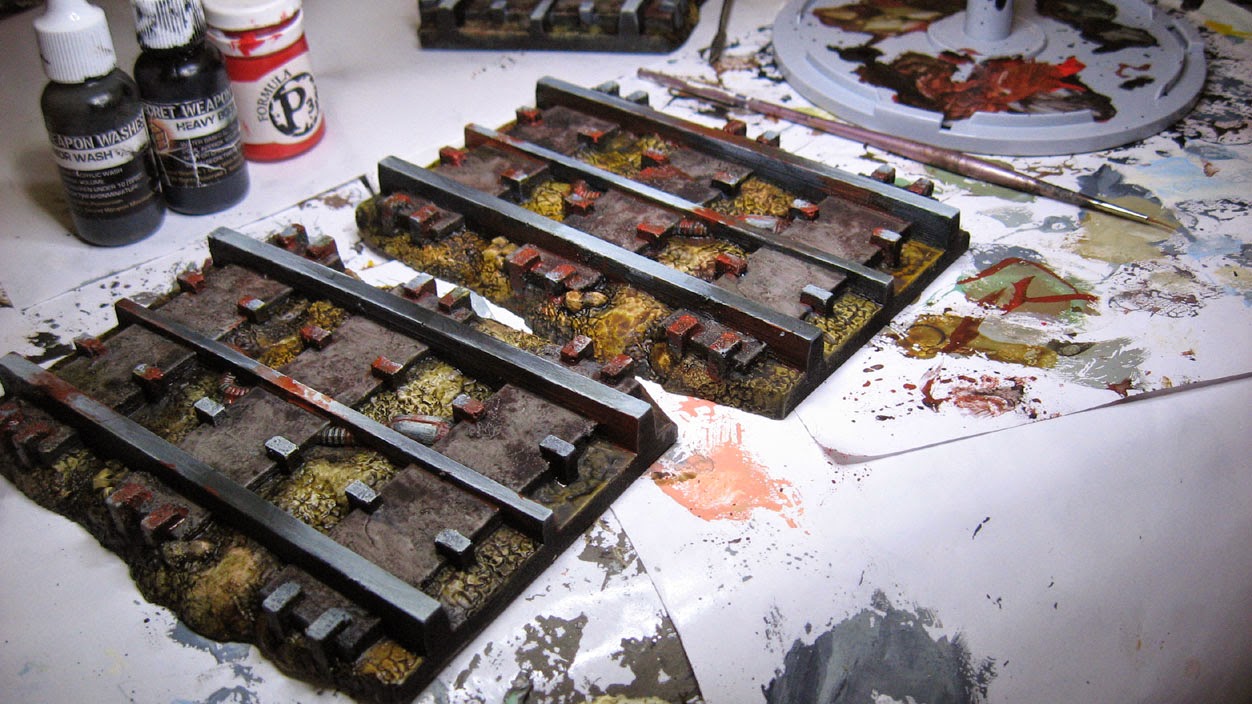 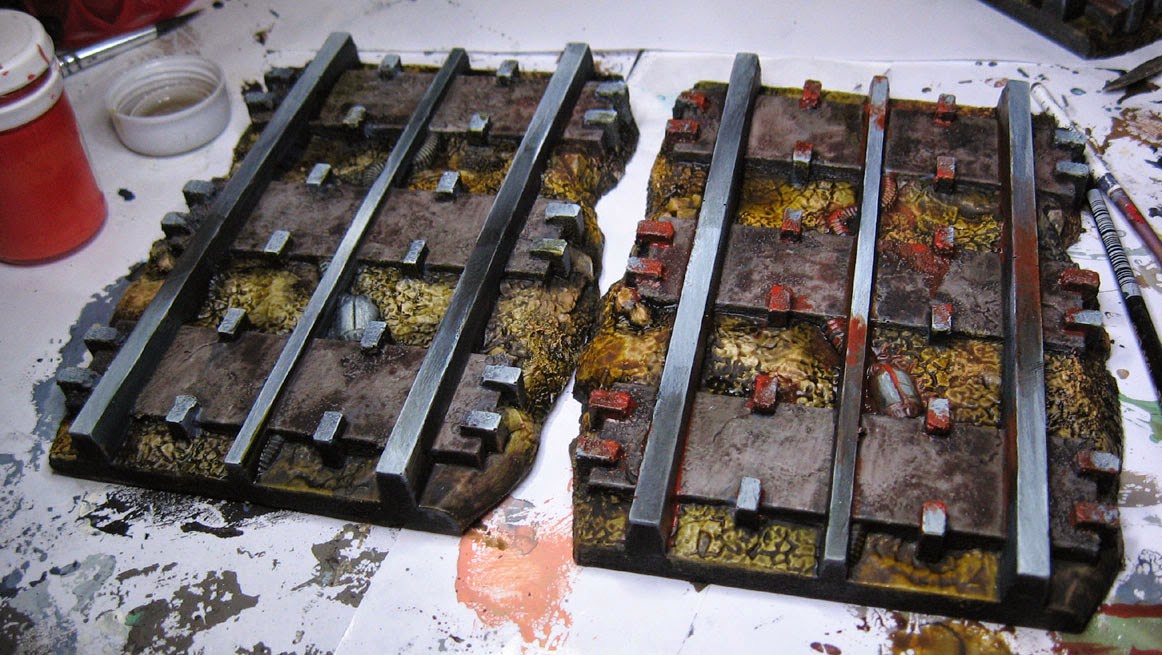 I just had to place one of the train cars on the rails, even though more work will be done to each! 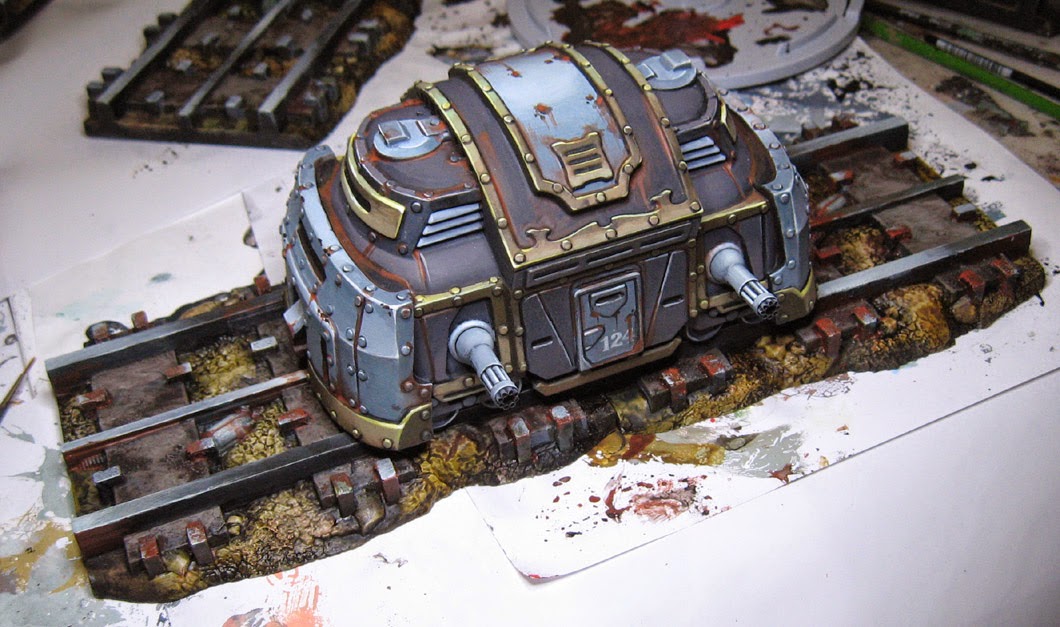 Seeing this made me all the more anxious to get to the final images. :-) 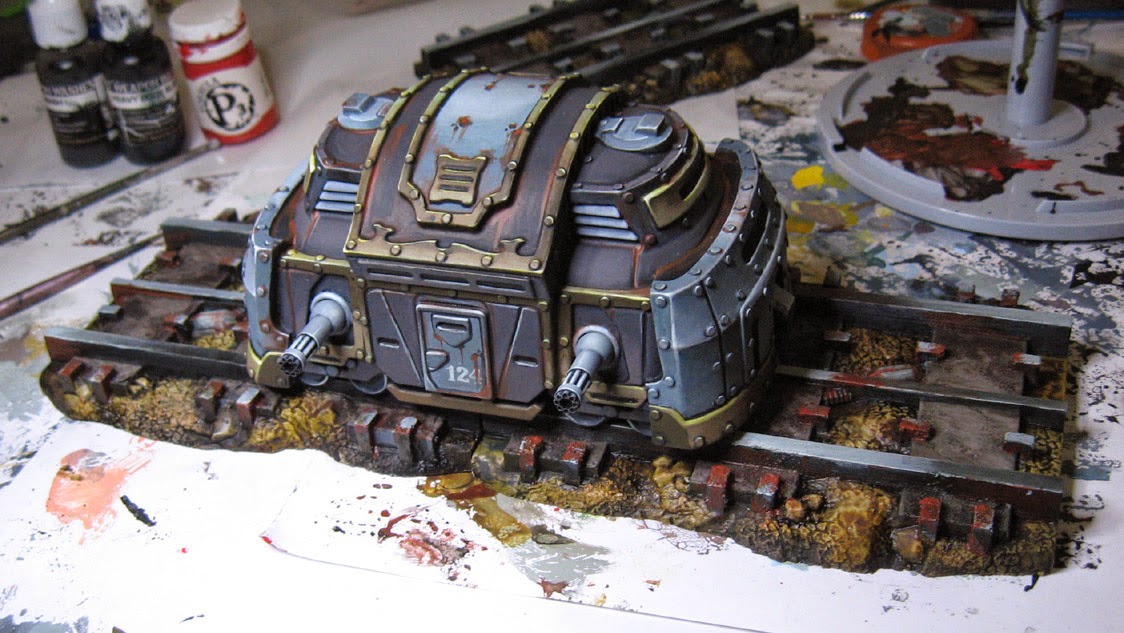 Posted by wappellious at 2:51 PM 2 comments:

Can't ride the rails without rails! 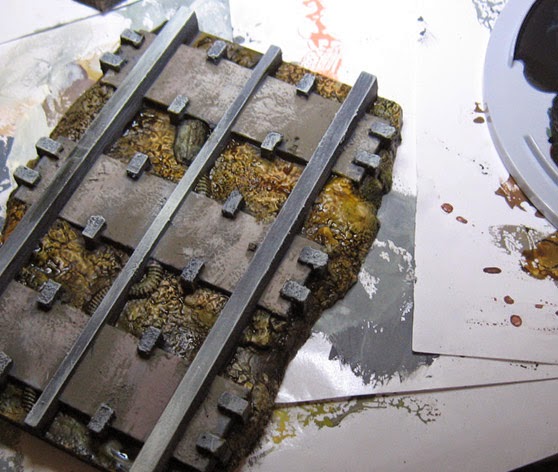 SO, that huge Wild West Exodus siege train had one more huge element that you haven't seen yet.  Rails!  Five sections, in fact. 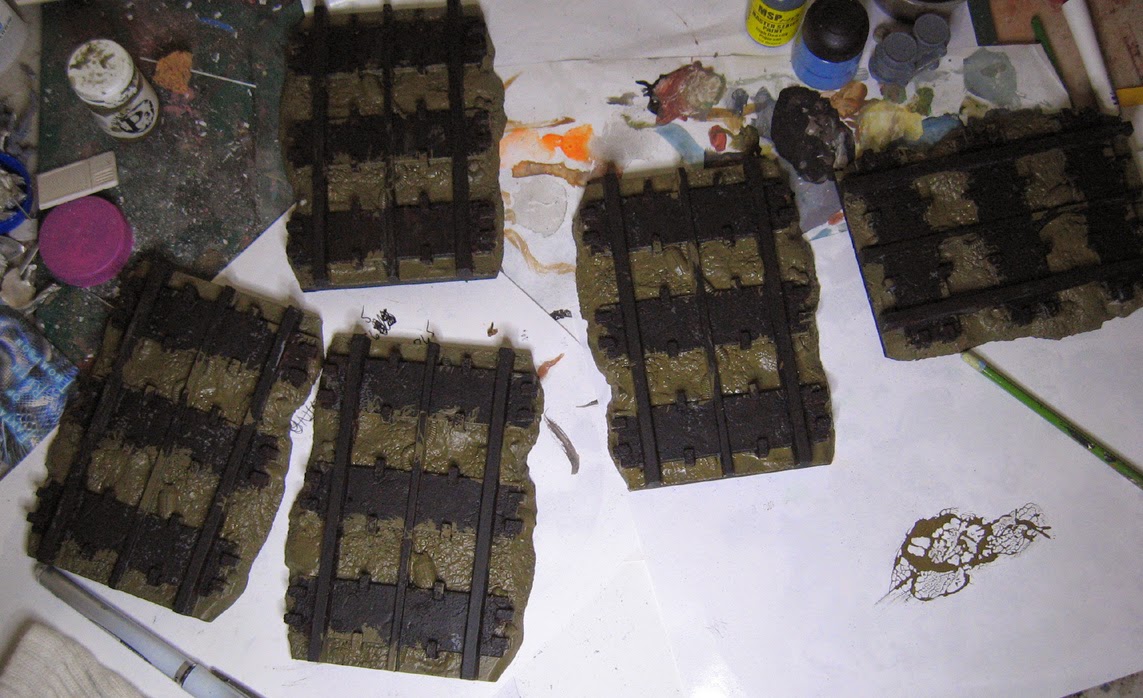 Hard to "ride the rails" without 'em! Just like any other Shaded Basecoat phase, the idea is to work lighter, and glaze/tint later. 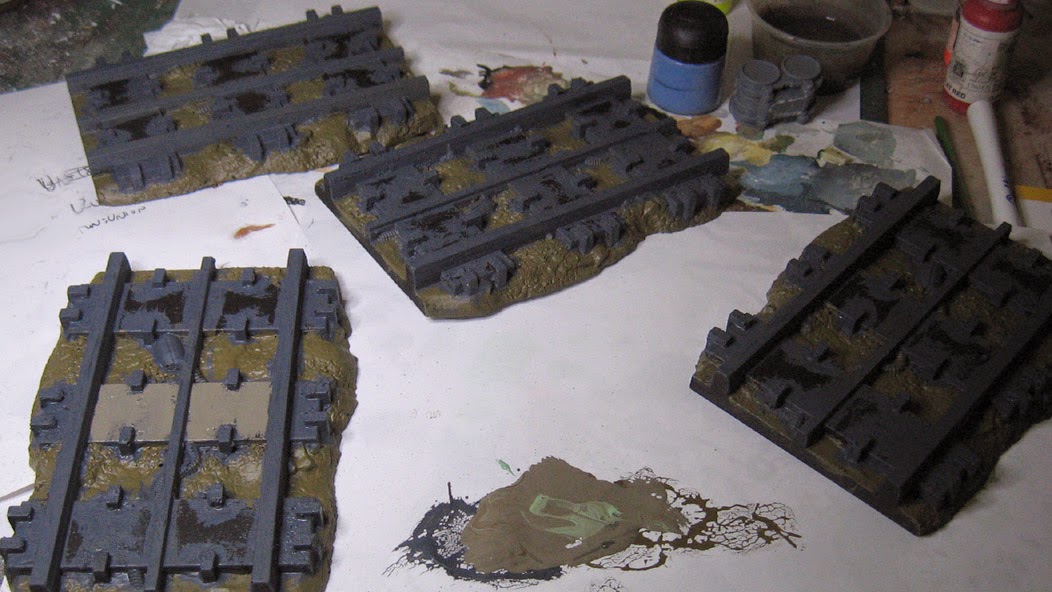 So, I kept working progressively lighter and lighter, although I did switch the colors a bit in various areas, mostly so I would have an indicator for when it was time to do the glazes which way I wanted to shift the hues. 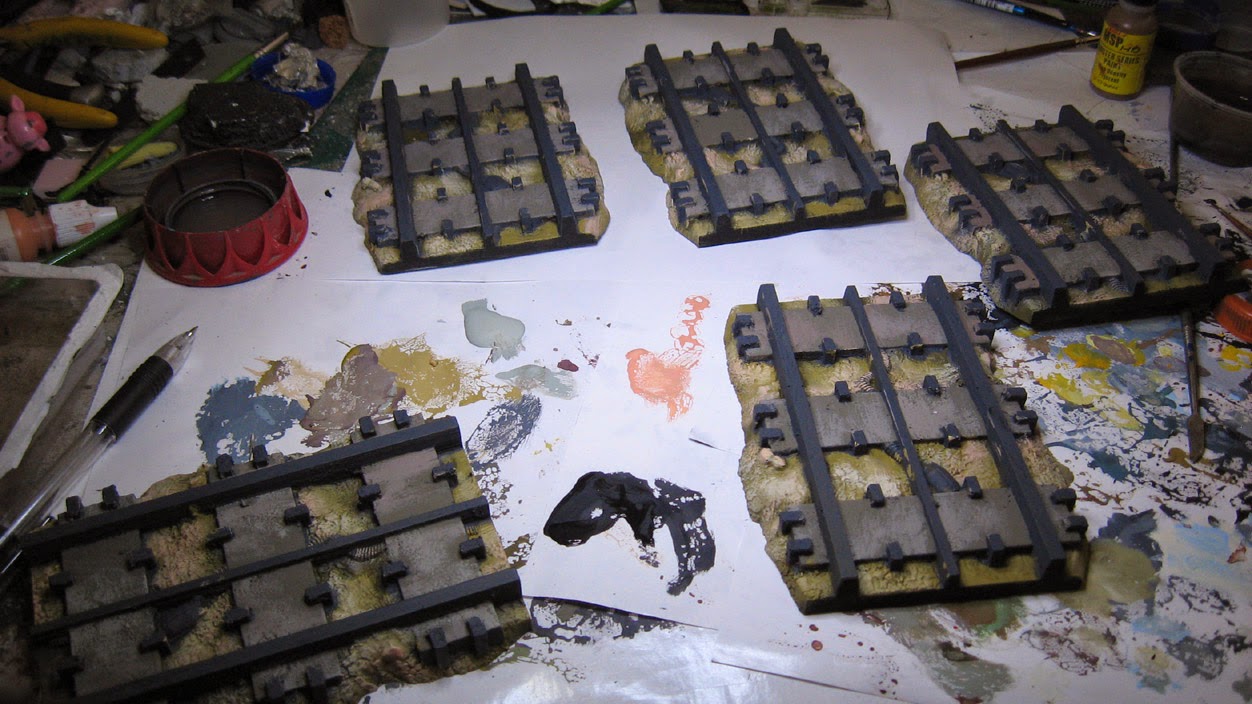 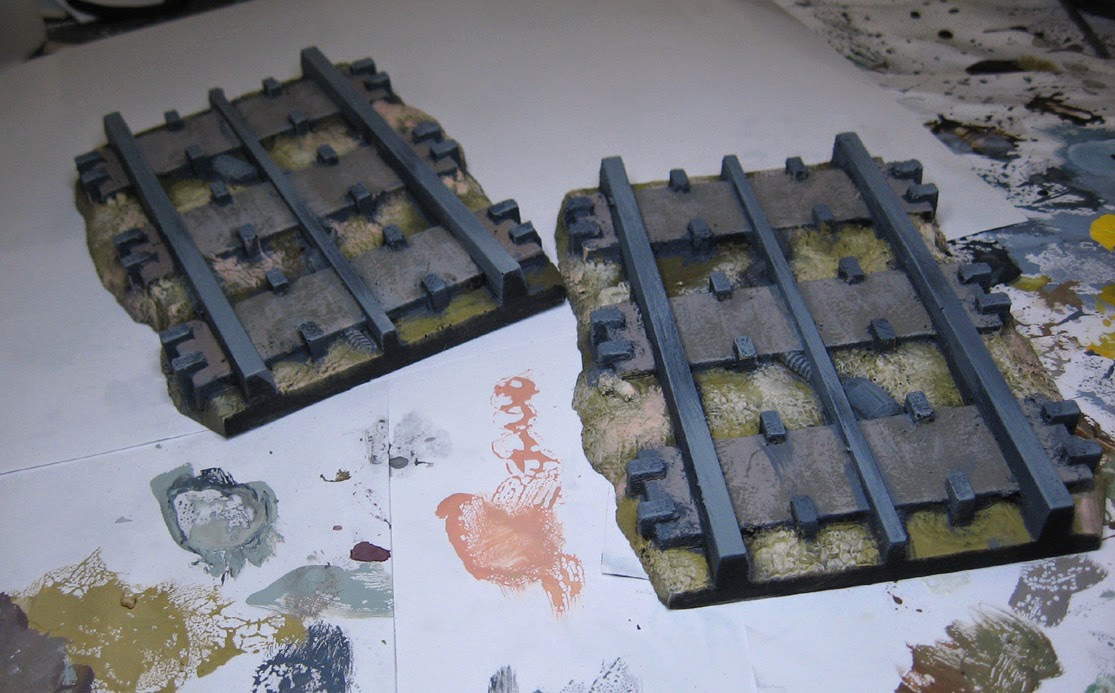 The ground areas are done... now I just need to do something similar to the actual rails. 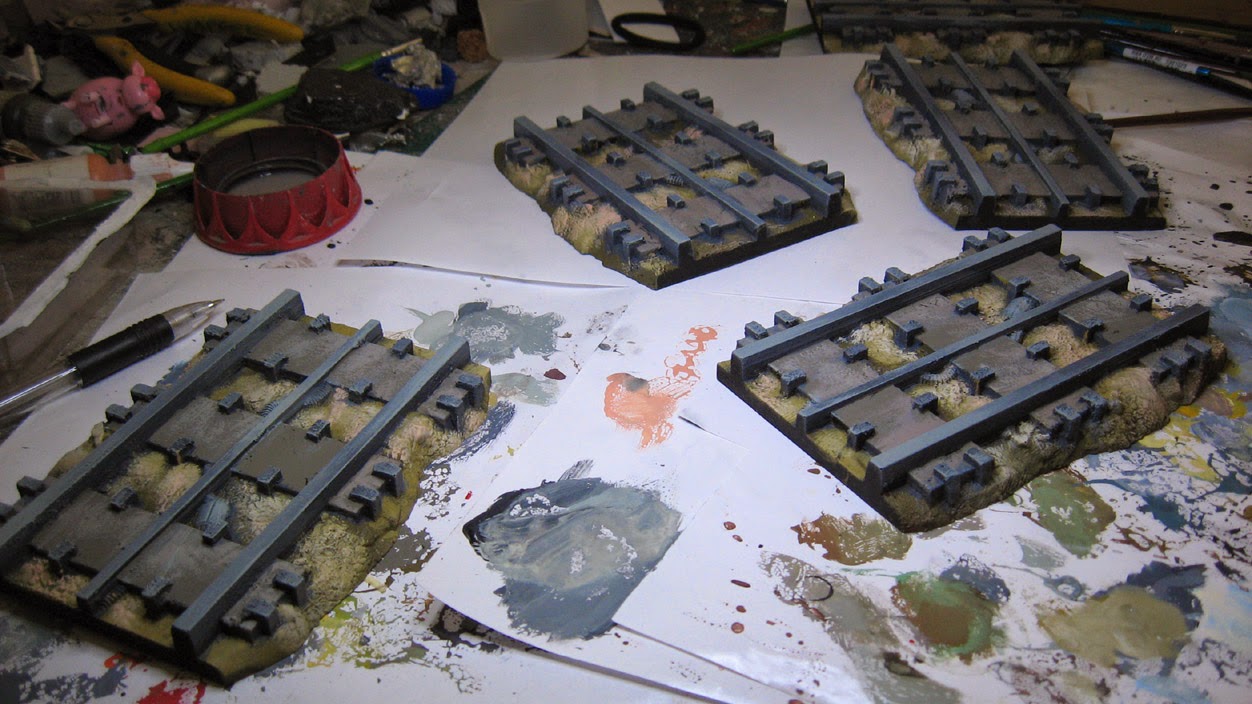 As you can see, the rails themselves have more shape to them. Ready for glazing! 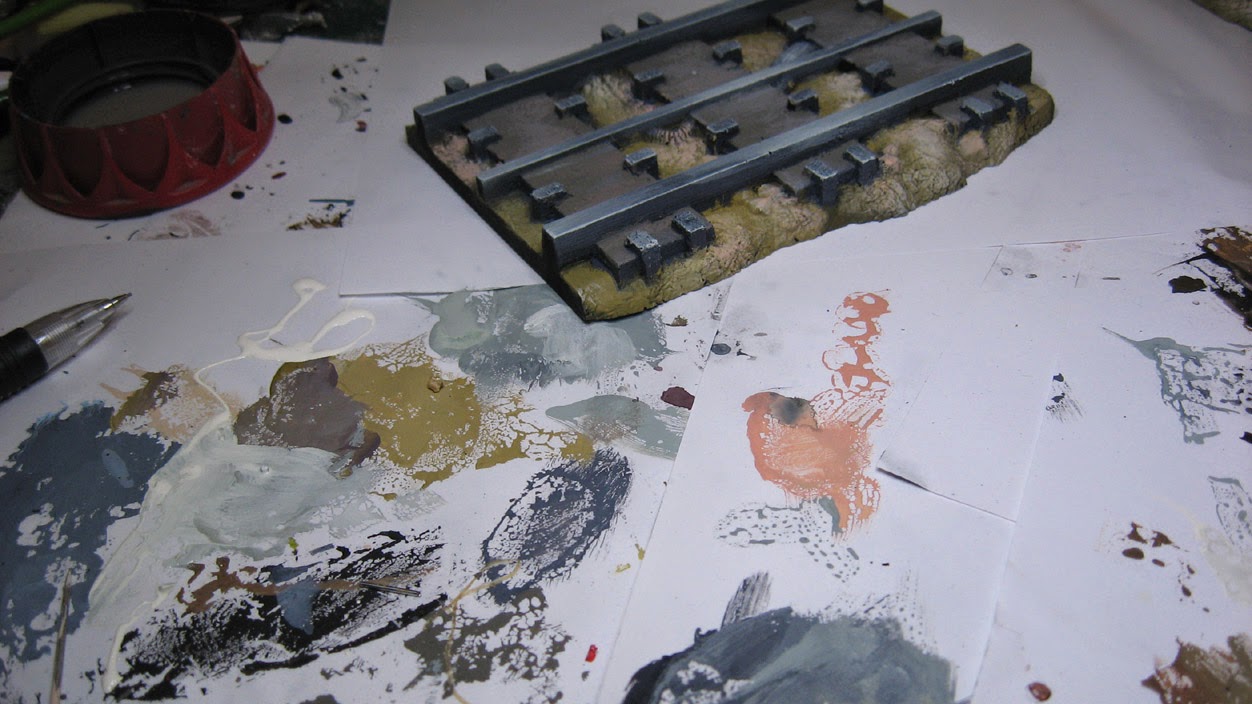 I put an array of glazing colors out on my "palletes".  Yes, those are Dvd holders.  I have dozens of them around the house now after burning a few thousand disks!

There were Secret Weapon washes, Vallejo glazes, Reaper liner paints, and all the usual suspects. 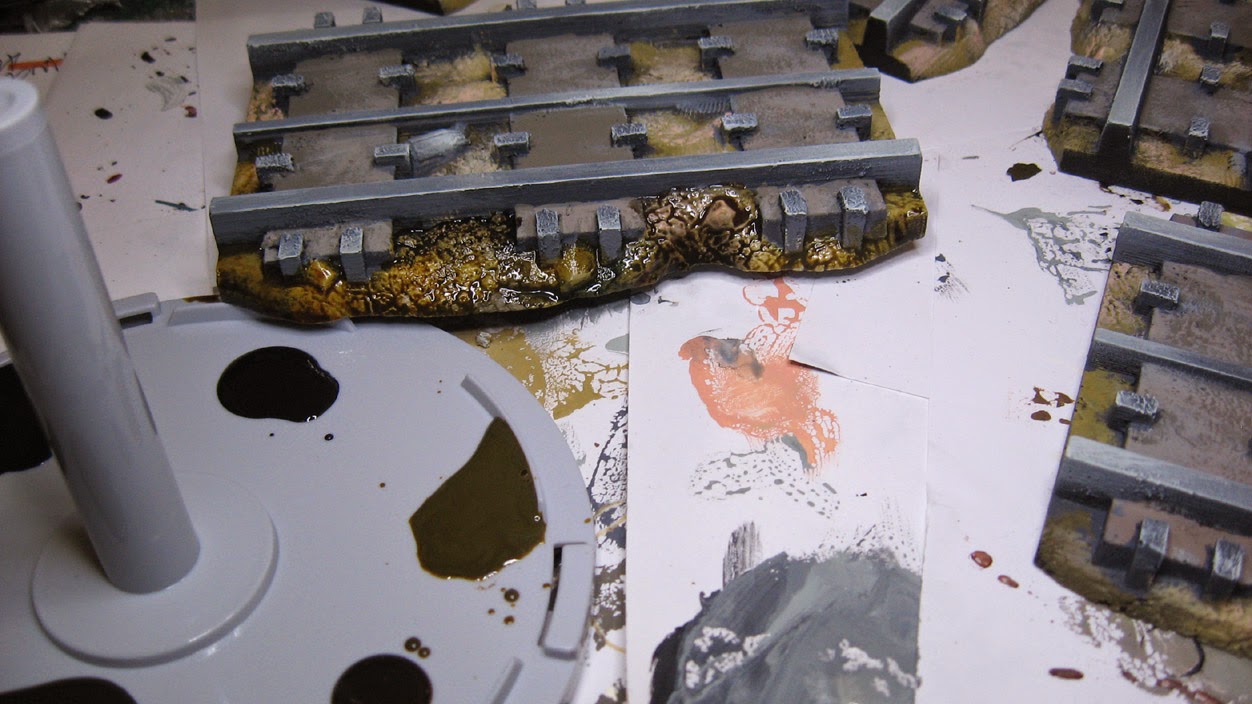 I think you can see in this shot how I tried to let the colors blend together... sometimes green mixing with reds or tans freely, lighter or much darker in places.

Weathering will be added to all of it later, so once again, I have to think a few moves ahead. 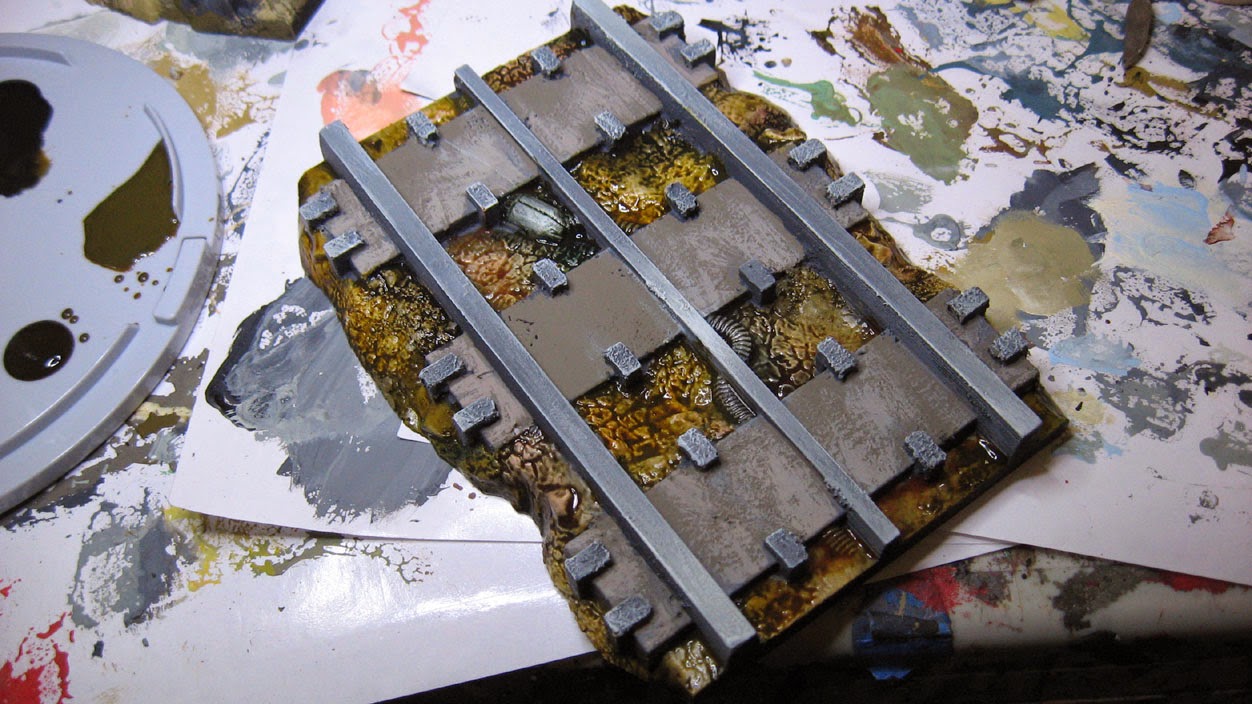 Here's a comparison to one section that has not gotten any of these glazes yet. 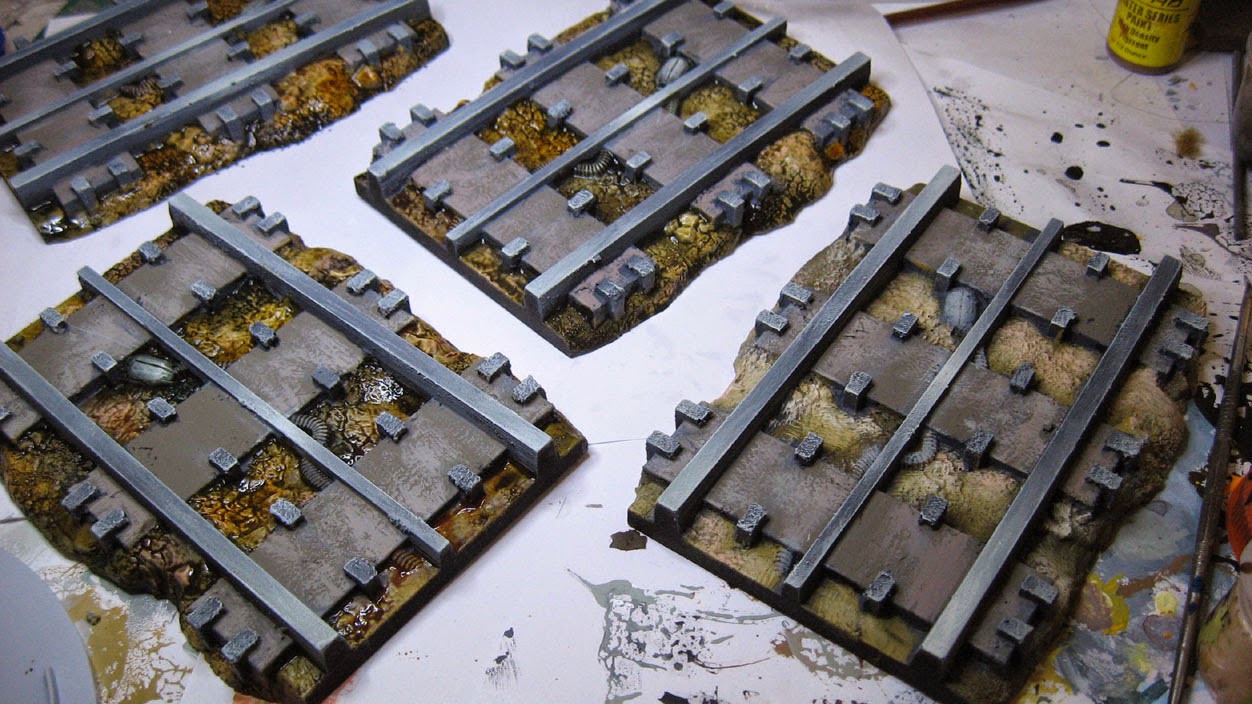 With the darker glazes added to the ground, it was time to hit the rails with their glazes! 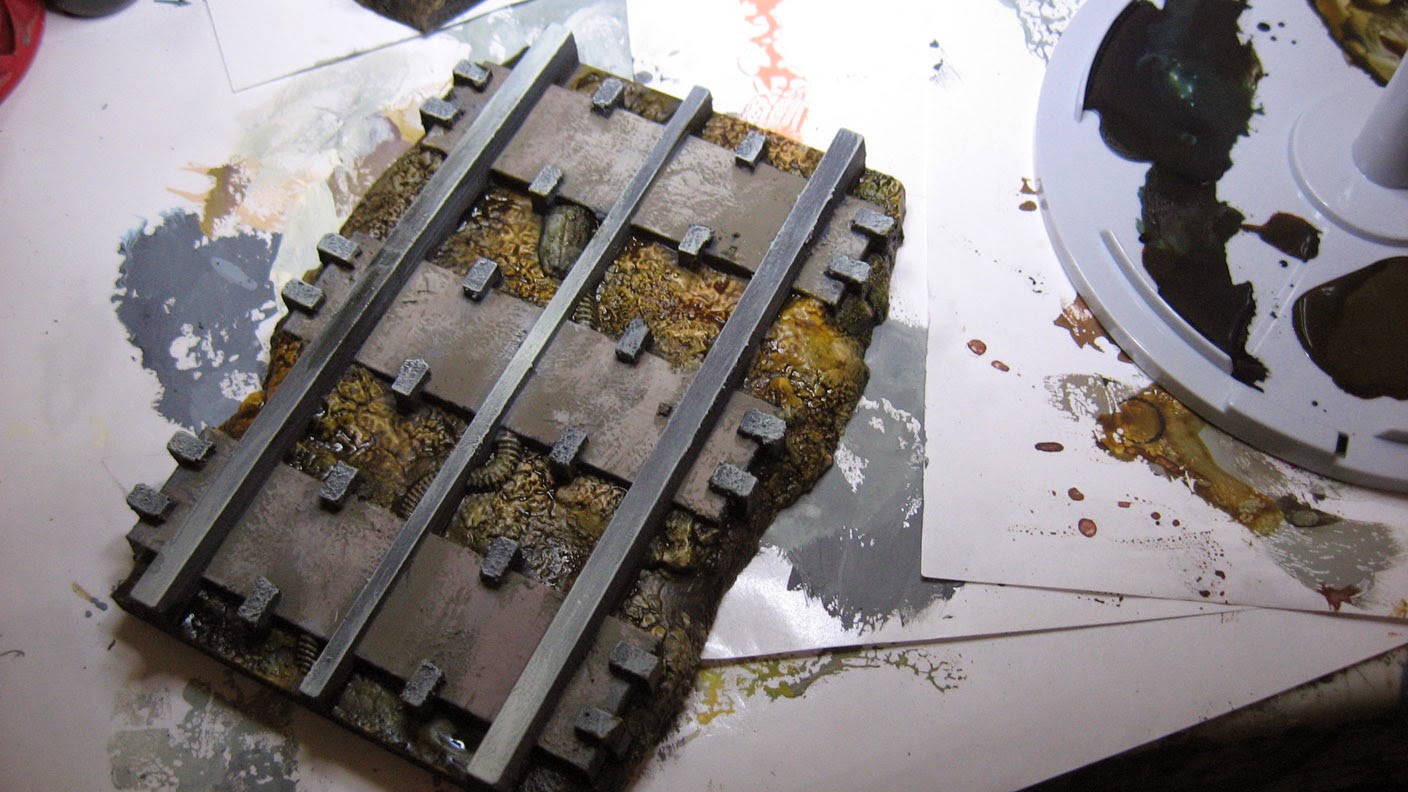 For the rails, I used mostly the blue and black combos.  I did toss in a little of the Secret Weapon concrete wash, since that is semi opaque, and added a neat effect. 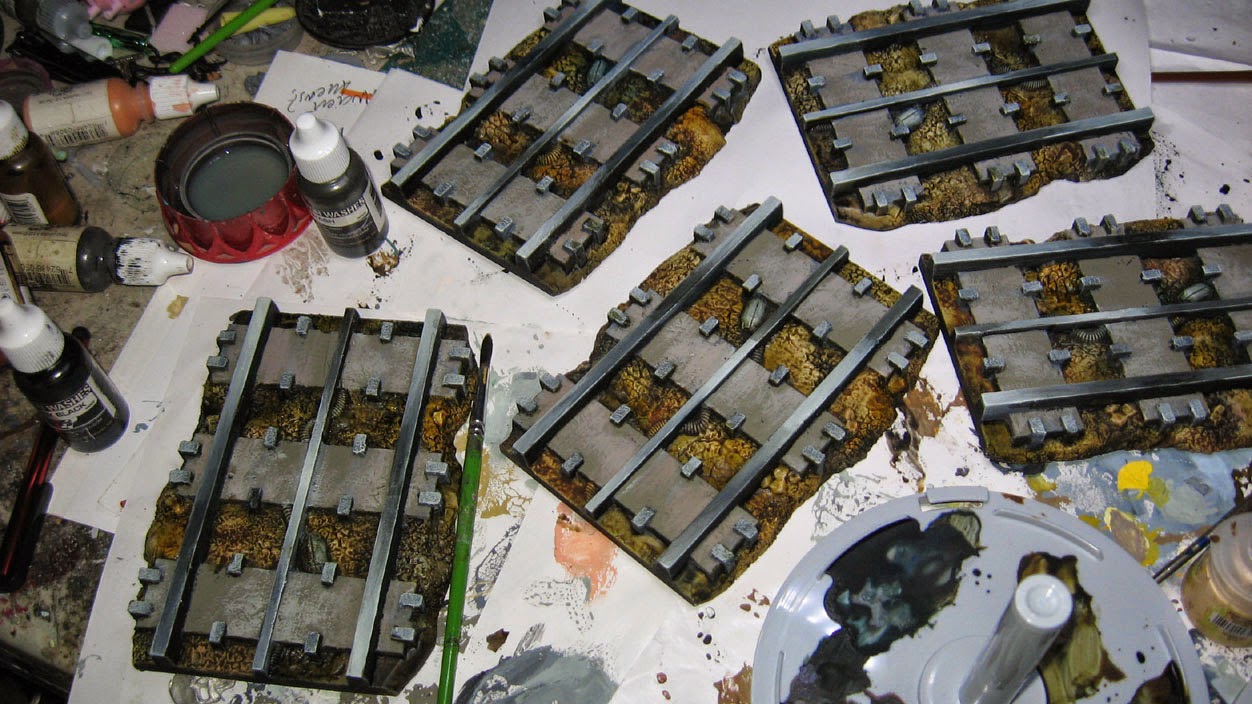 Posted by wappellious at 2:09 AM No comments: