Charge of the Light Brigade! 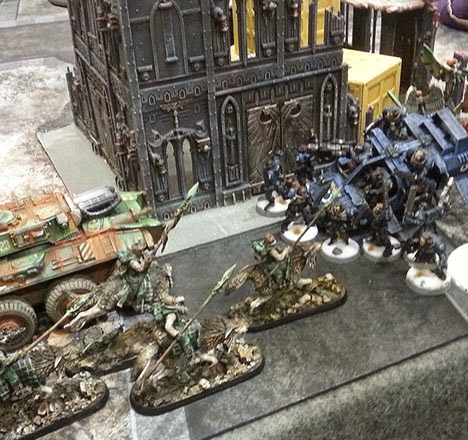 Game three... not as many pictures, since it was mostly 3 Thunderfire cannons ignoring cover every turn.  Remove minis, repeat. 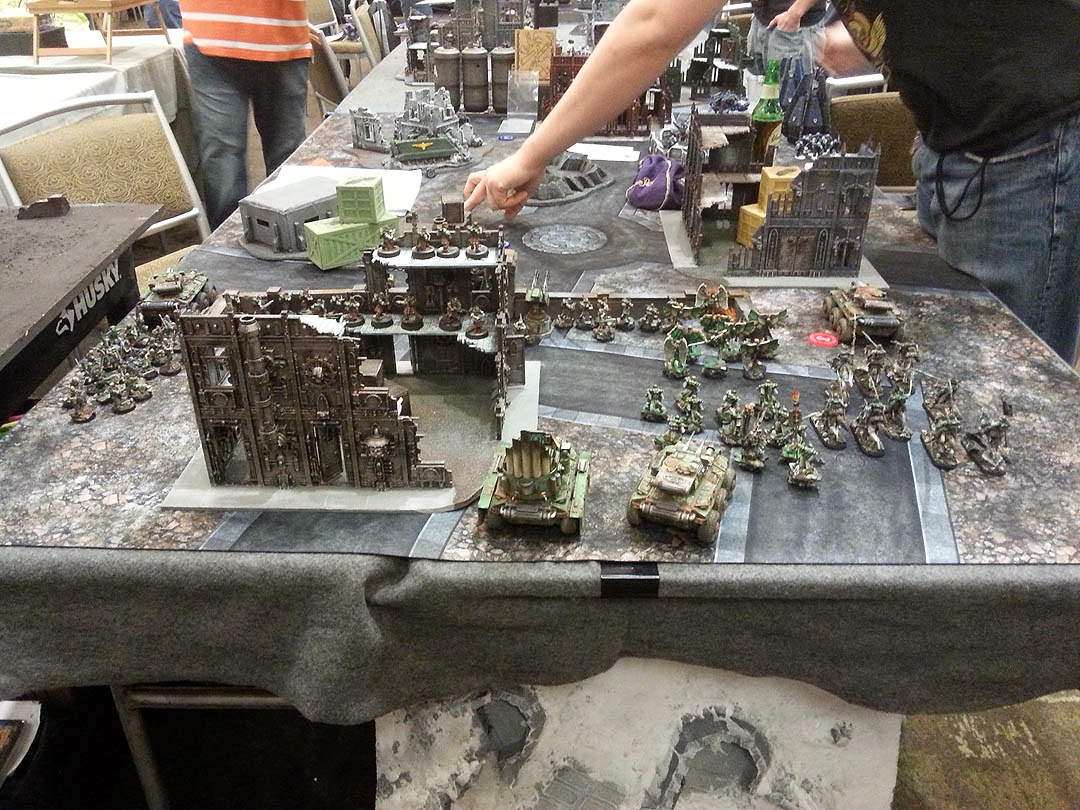 It was a really nice looking board, though, with a mat that matched the terrain perfectly! 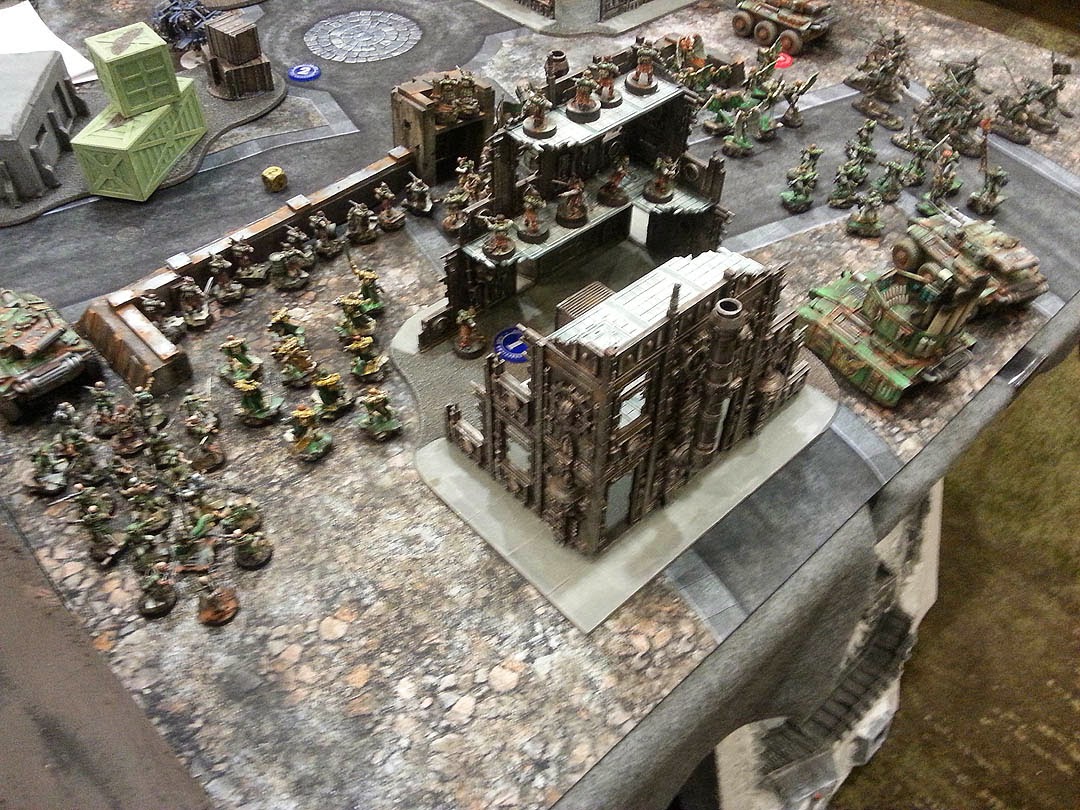 All set up, looking for some action. 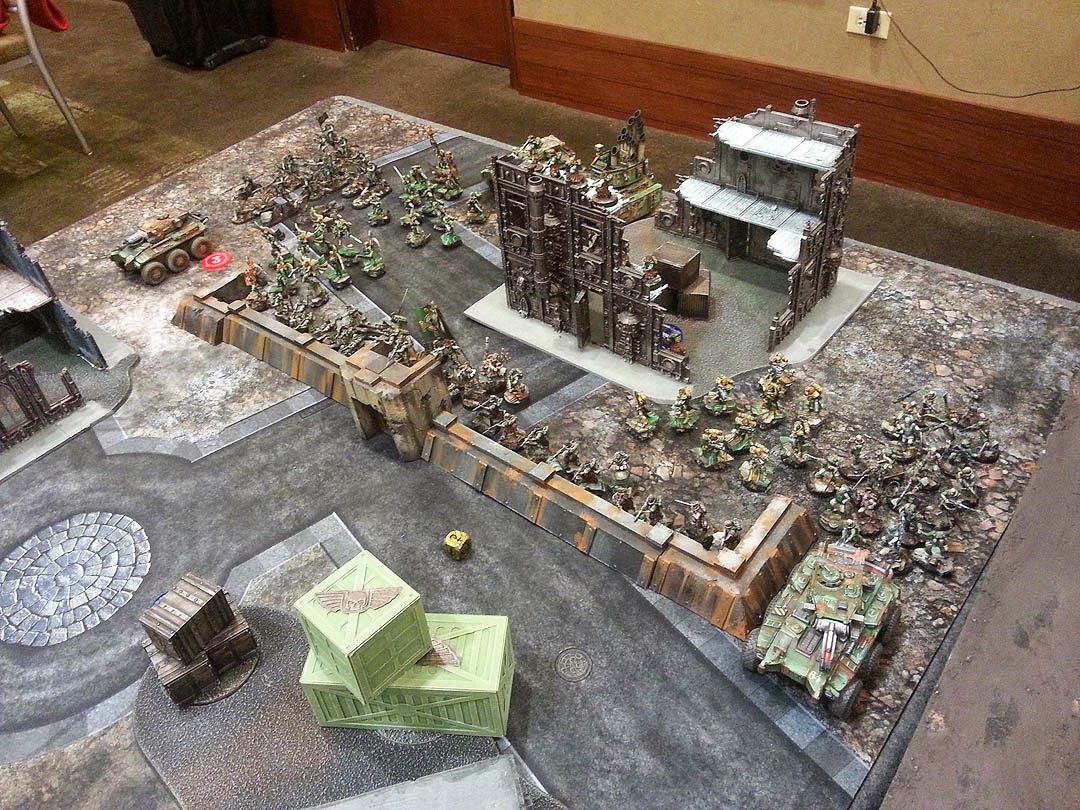 Had to get all the way across the board, so I had anything that could move quickly on the right flank... 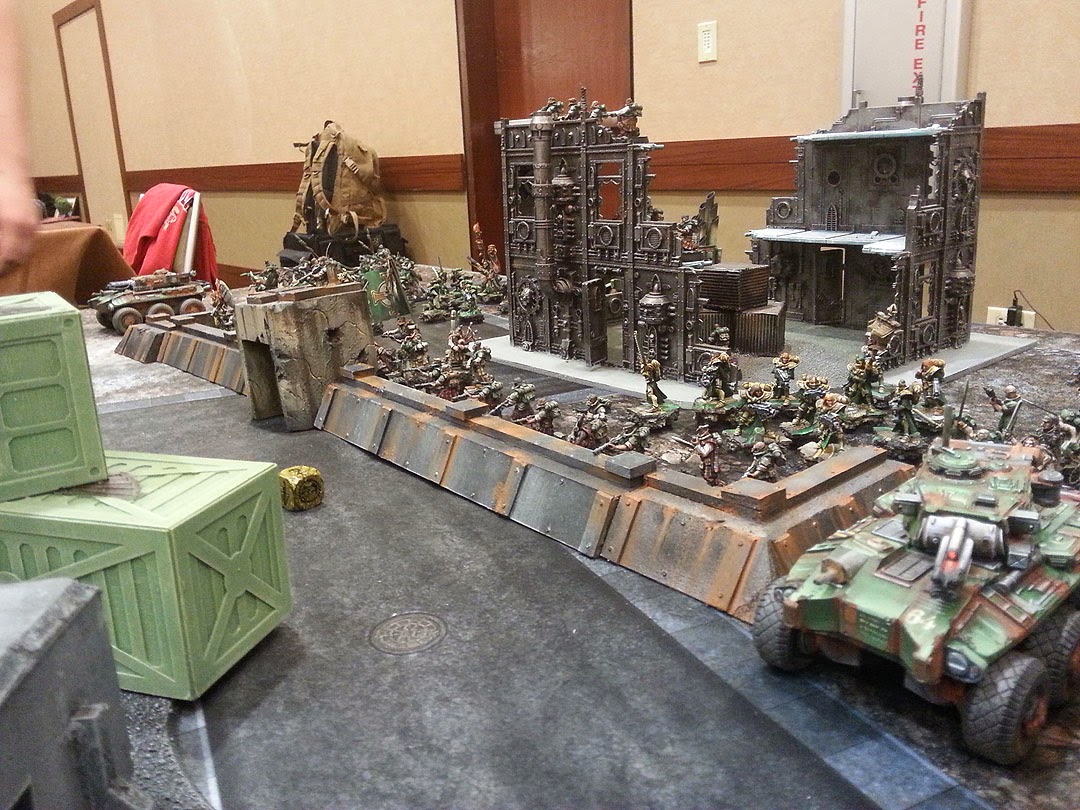 They could move faster, however, with a pair of drop pods.  How I long for my old 4th edition Demonhunters.  Would have been an interesting 'welcome committee' waiting for them :-) 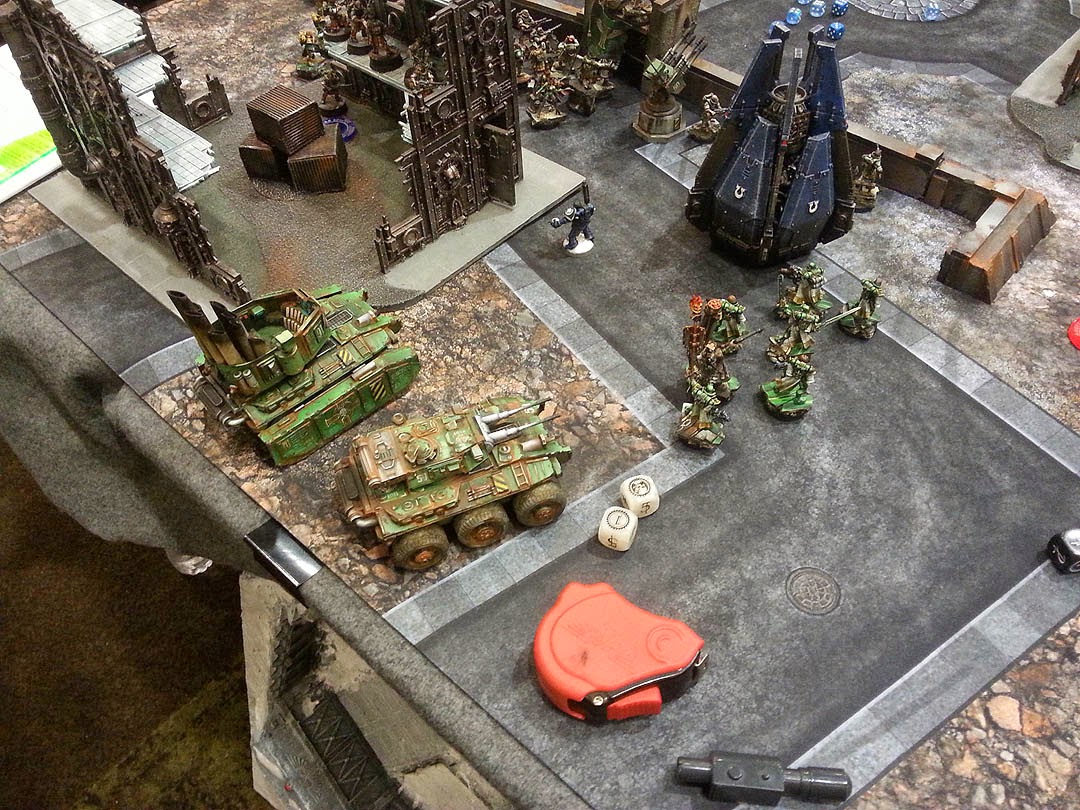 The only action of note was Mogul Kamir leading the wolf riders to victory over the scouts in the speeders, with a little help from Saint Morrigan. 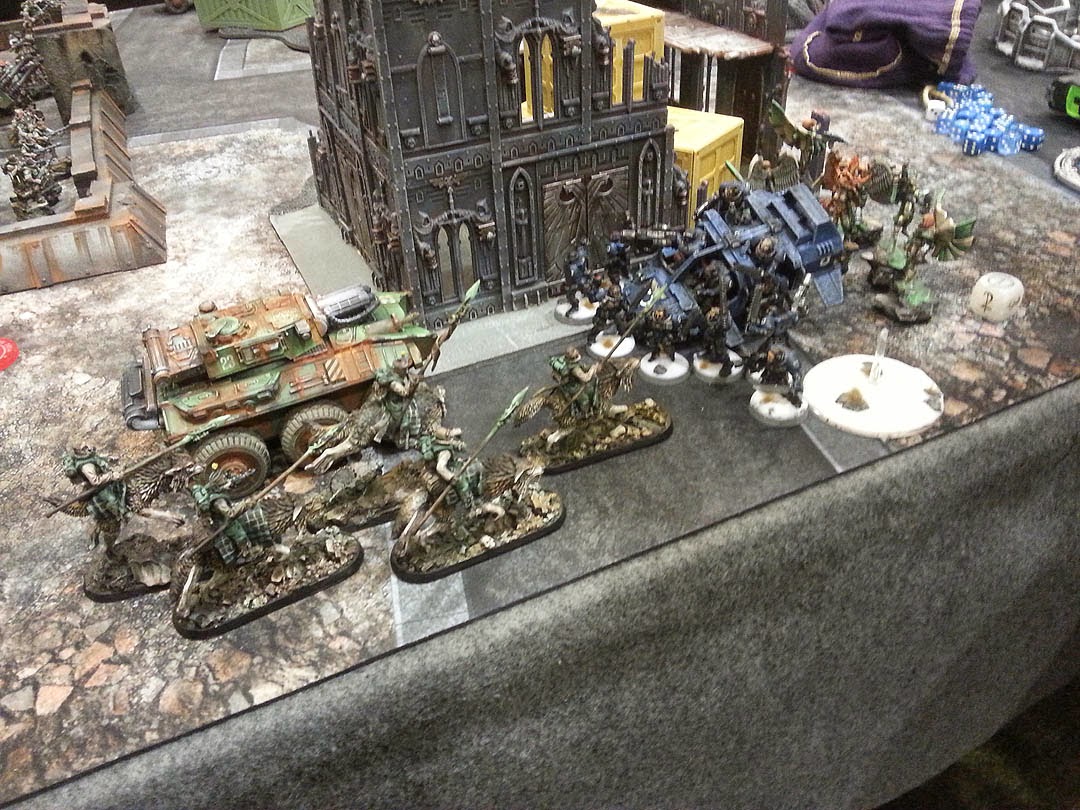 I actually did kill a lot of stuff from the Smurfs.  Probably more than in any other game.  I think just about all of their mobile units were gone... 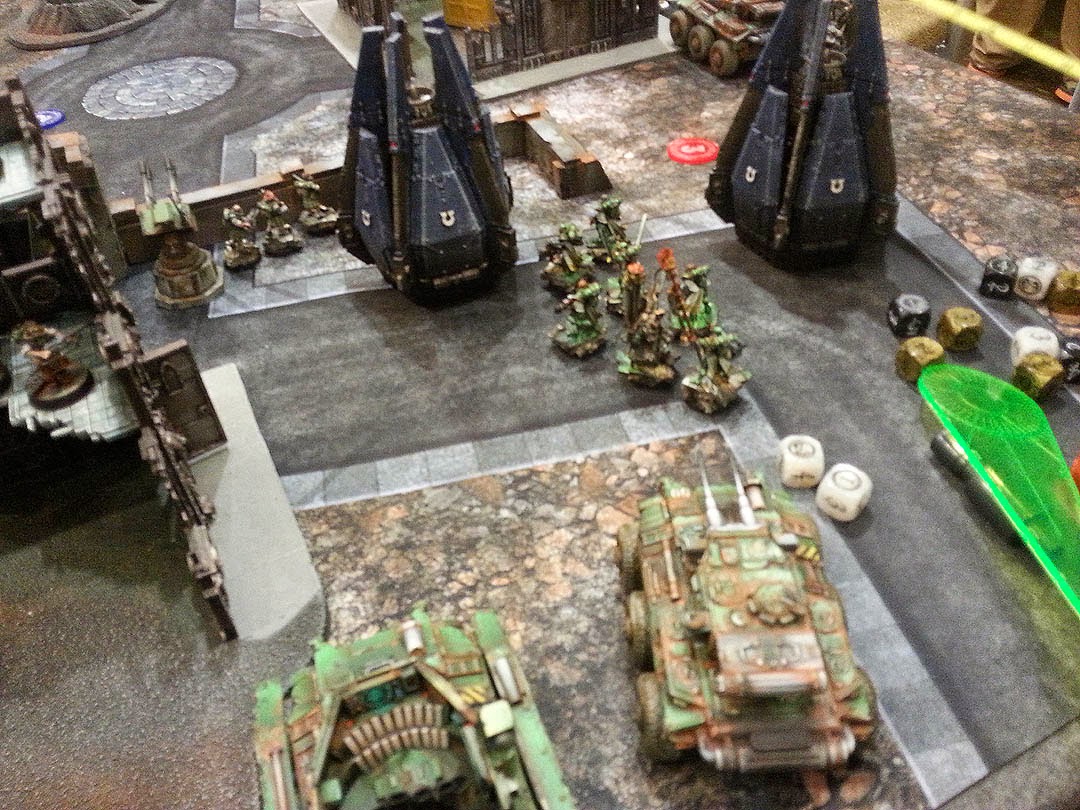 Then onto game four, the Tide Changes... 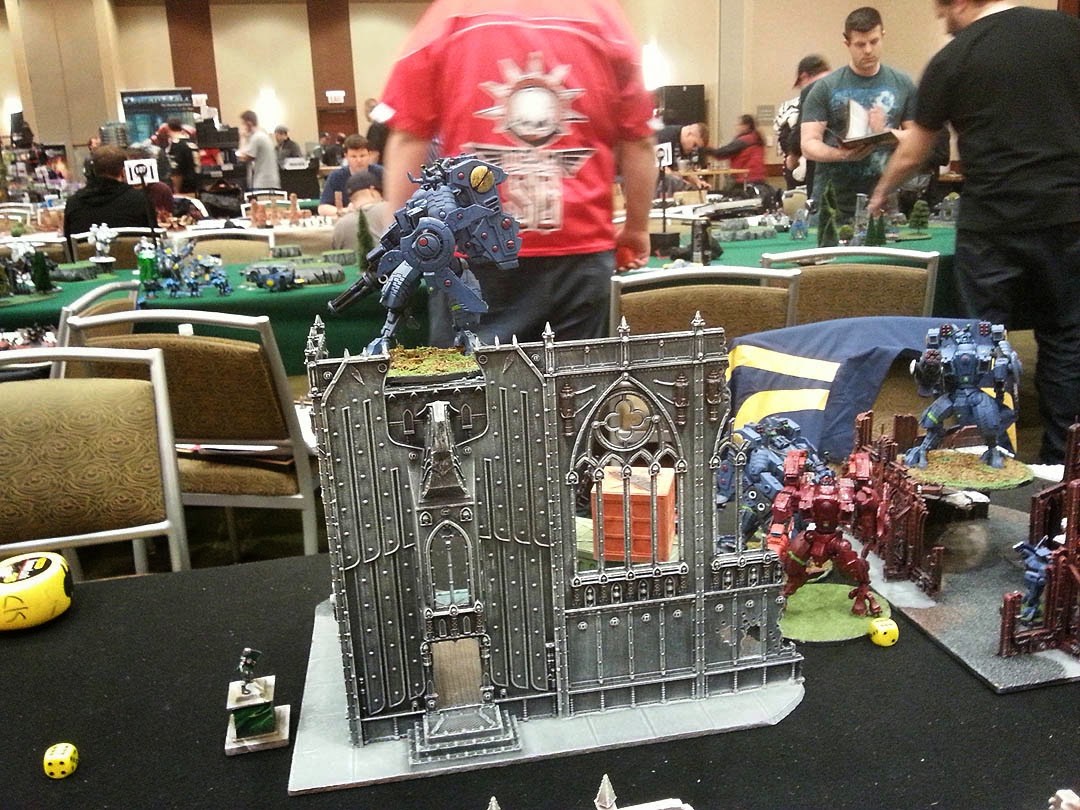 Posted by wappellious at 9:50 AM 4 comments: 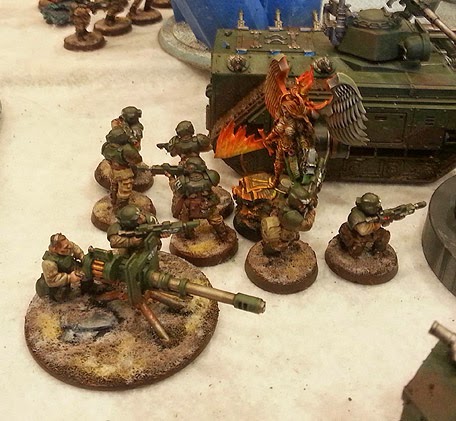 So, we continue with game two... the inter-family Guard spat.  This particular Inquisitor had proven troublesome to the Sisters... so it was determined that he should feel the wrath of the living Saint.  Curse him and his little dog!! 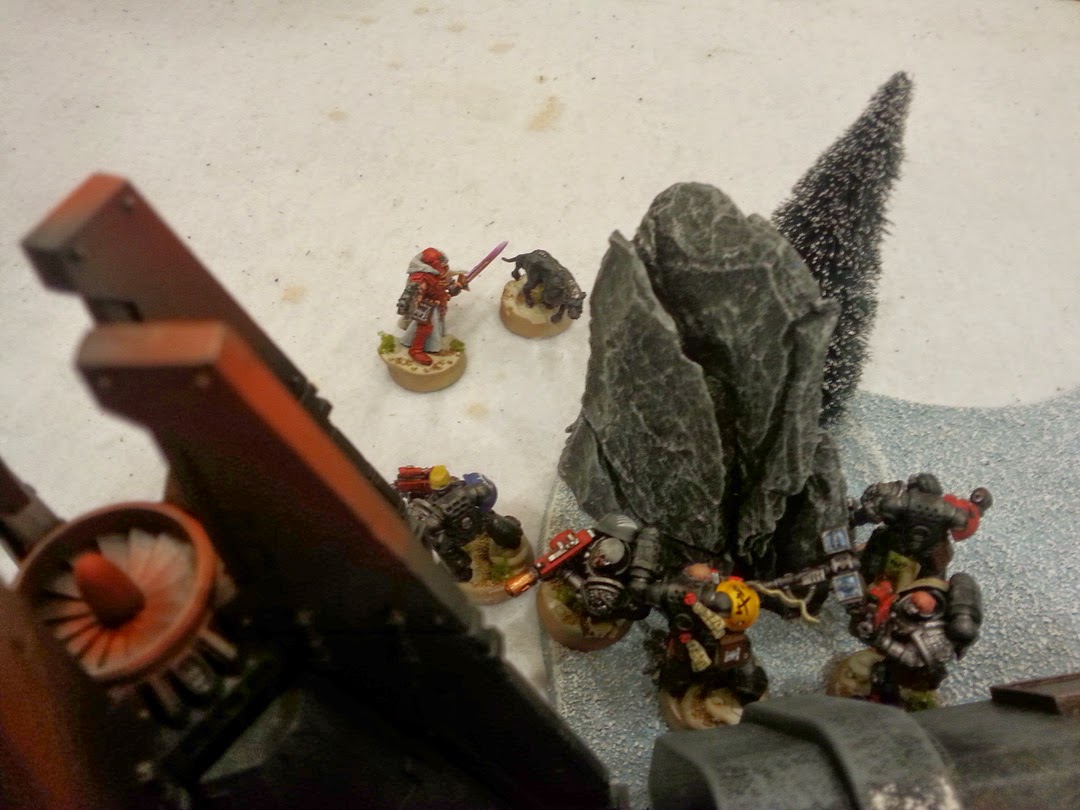 Here's what was waiting for him.  Lady Chenkov and her conscripts, as well as Saint Morrigan. 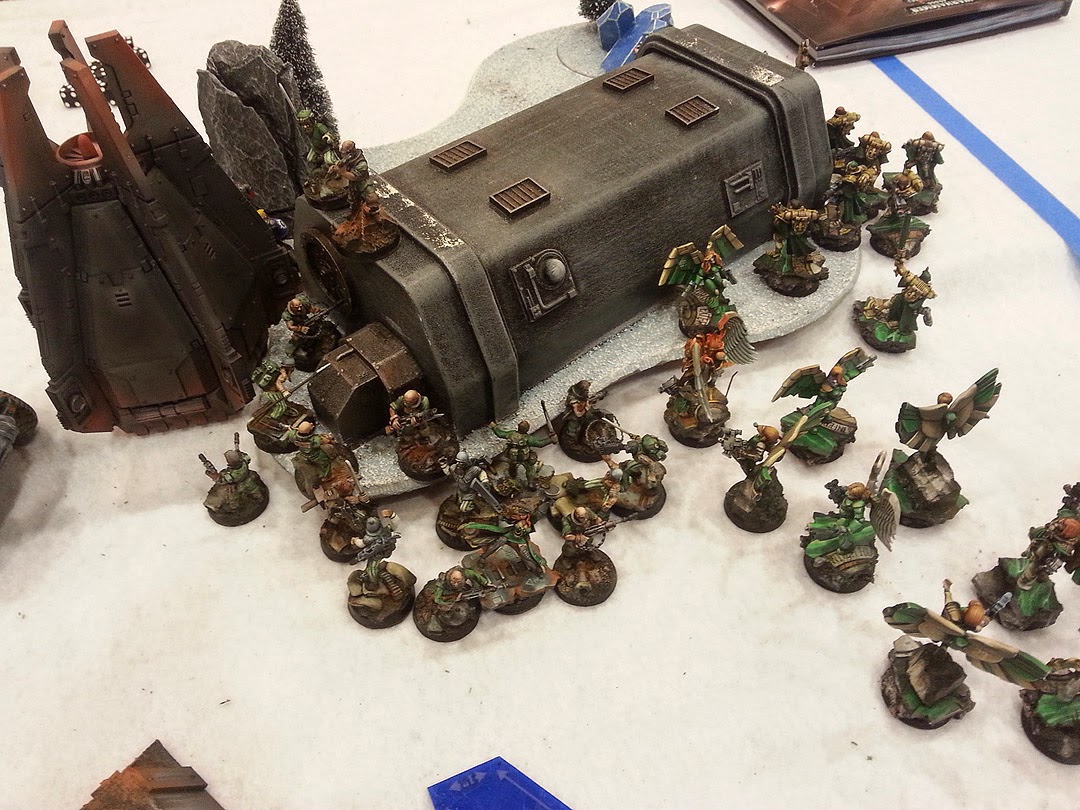 I had no pie template weapons in my list, but for one brief shining moment, I did.  This pie represents a shoot down of the one flyer I saw all weekend.

Perhaps the snow was pretty deep, since it did not crash hard enough to kill all that many Guard... 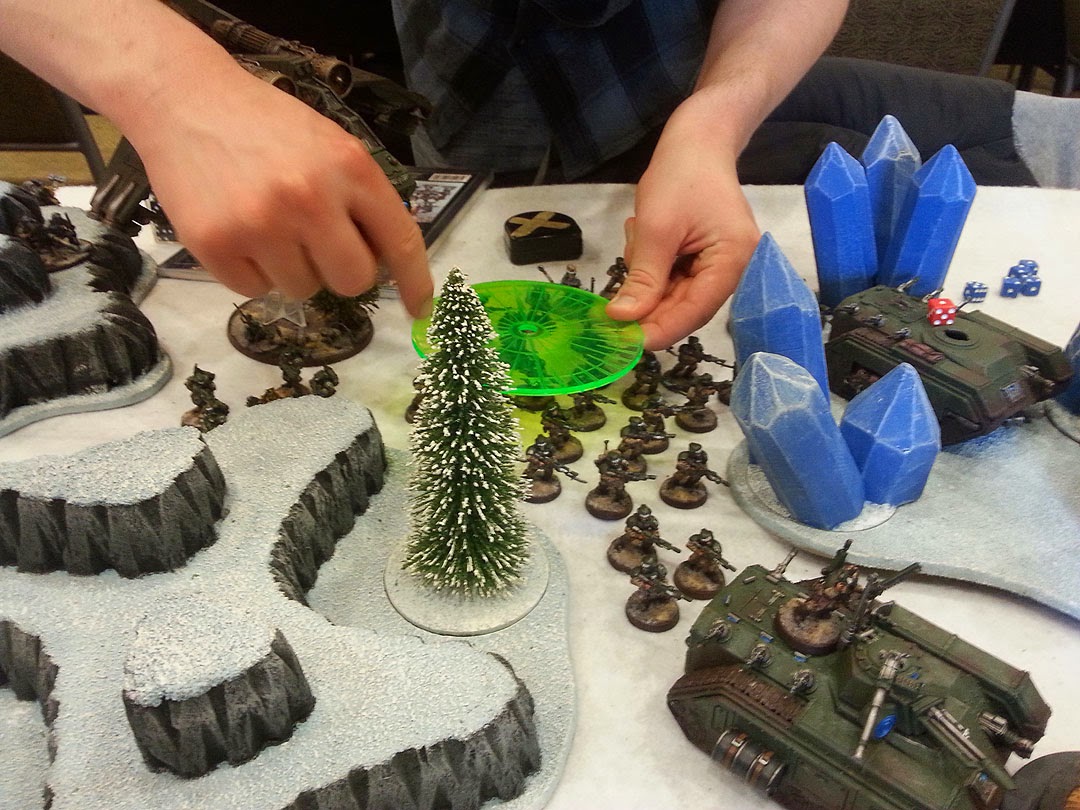 And now for the Death of a Salesman.  One who was peddling a false brand of Inquisition thought. 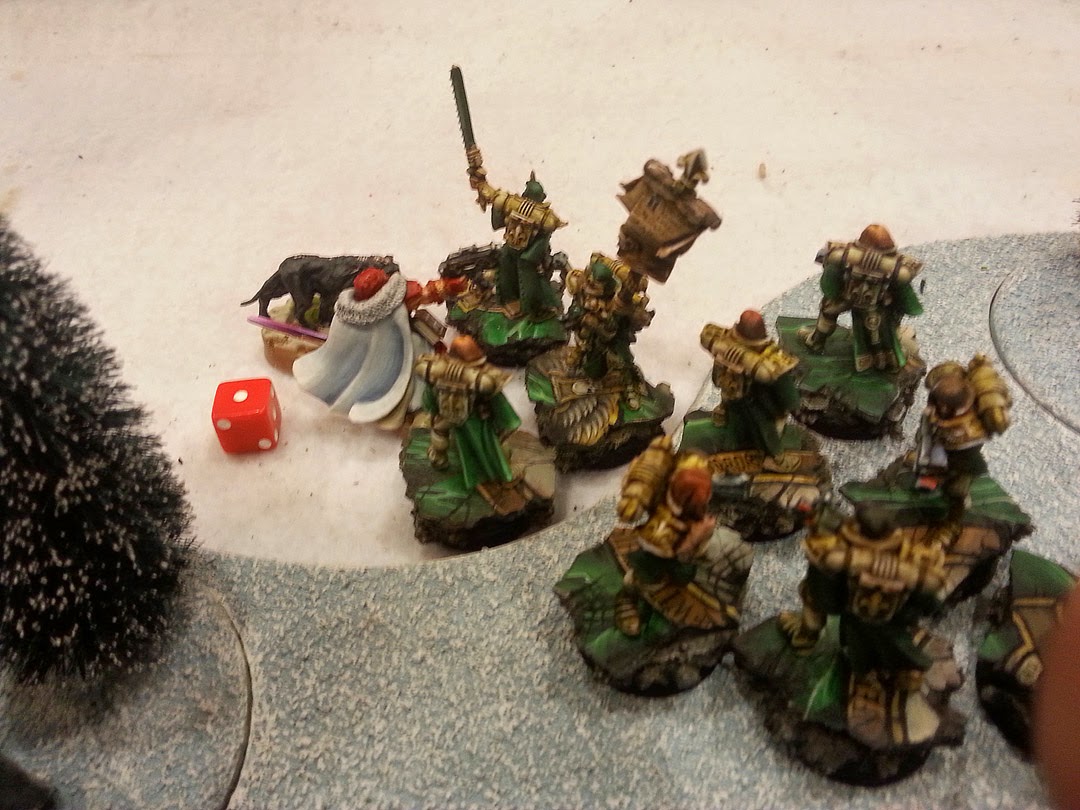 I learned the hard way that my Sisters should have brought better snowshoes if they were going to be more heavily armored than their Guard allies.  How else do you explain all the results of 1 or 2 on difficult terrain tests? 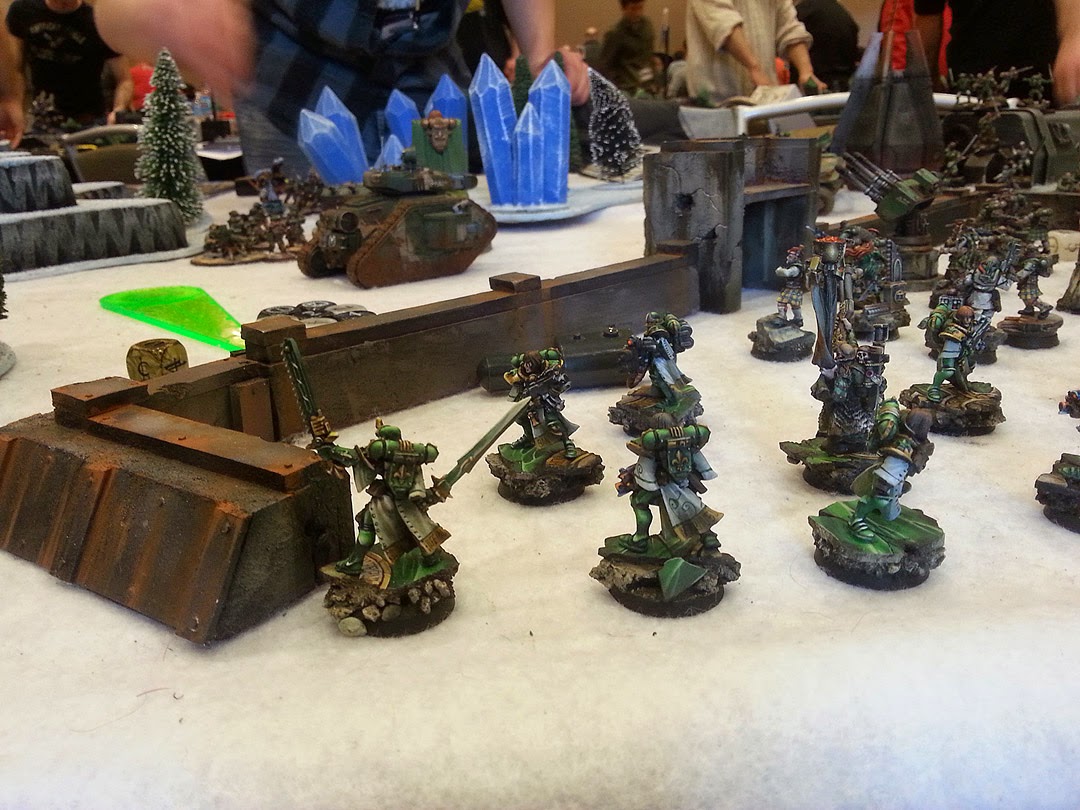 It was nice to see the all plasma Leman Russ in action!!  Even though it was pointing at me in the distance... 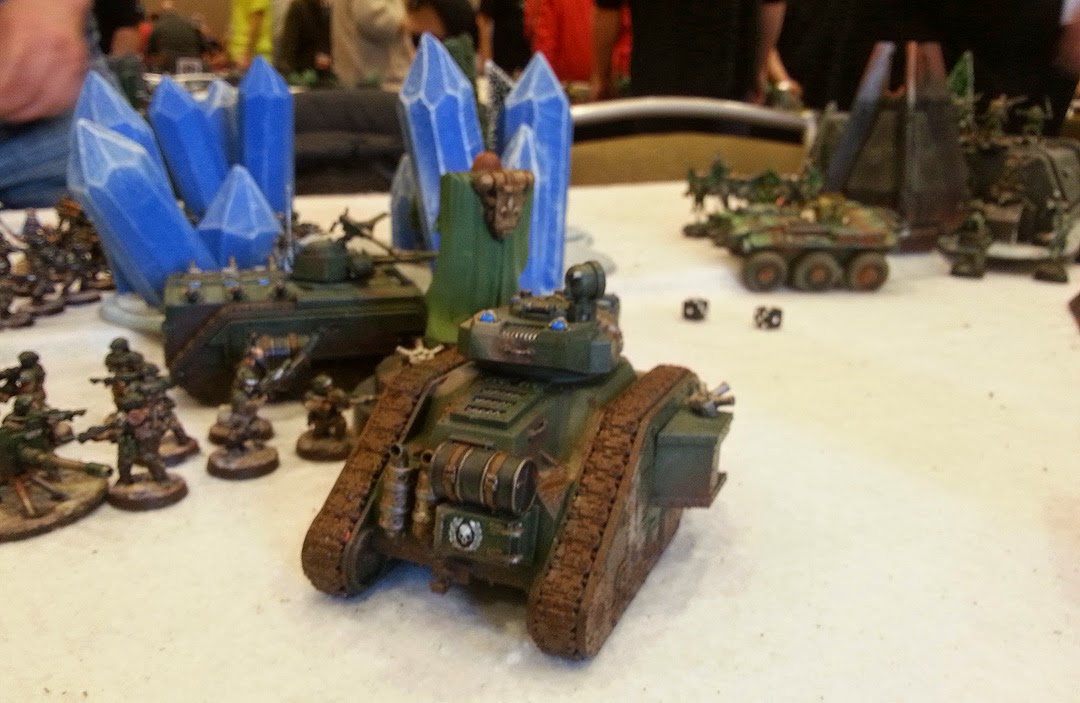 And here's what everyone was fighting over.  A statue of the Living Saint.

Towards the end of this game, I had started to realize the futility of using the ADL, or any cover for that matter.  So, I decided to reach out and touch someone.

It almost worked, as a secondary objective was to control terrain pieces with troops (or use denial units).  We only played to turn 4... with more time, some of these units could have started eating up the Guardsmen. 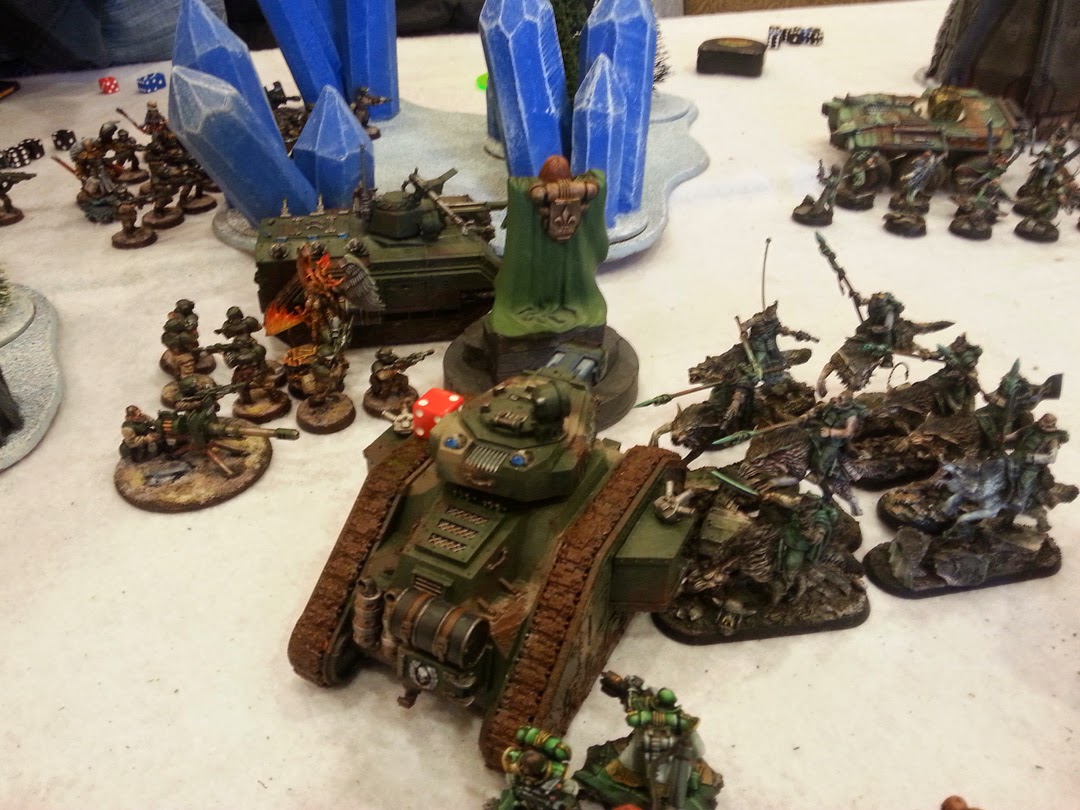 Such as this example, where Saint Morrigan tore wide swaths through the Misguided Guard single handed. 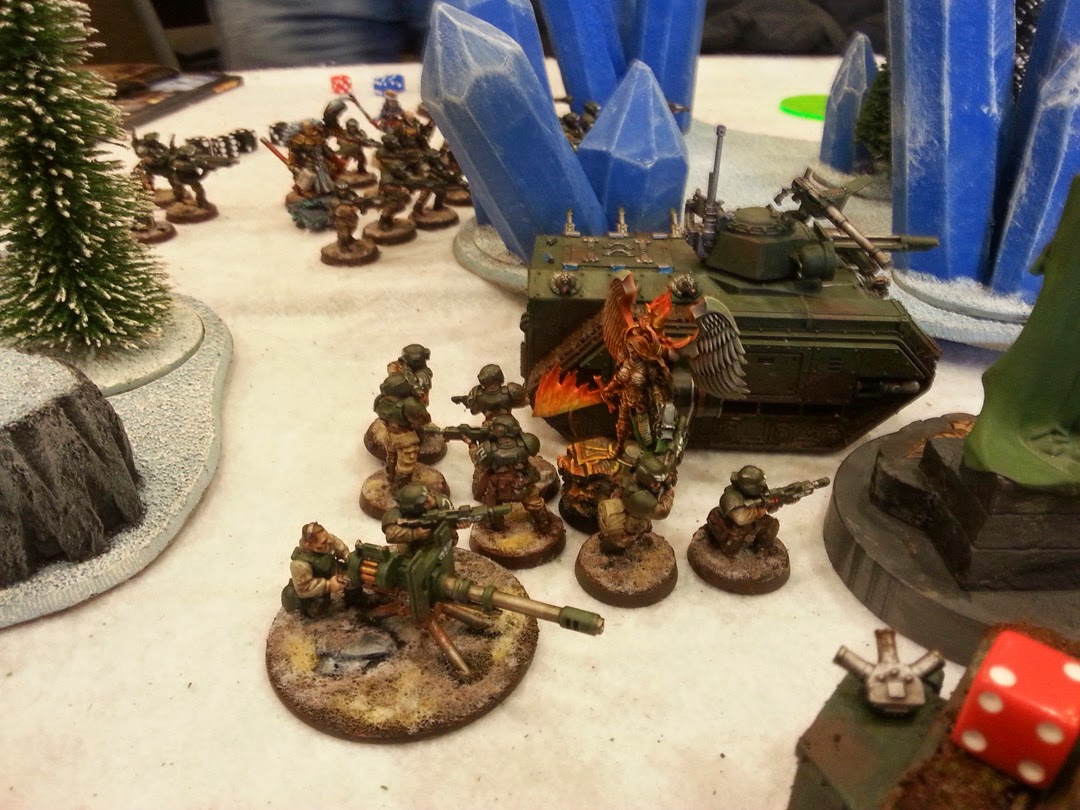 This wider view shows you the scale of the scrum on the center.  Mogul Kamir had driven his unit of Rough Riders all around the board to assault that Leman Russ.  Many penetrating this were made on rear armor in assault, but rolling '1's on damage tables does not work so well :-) 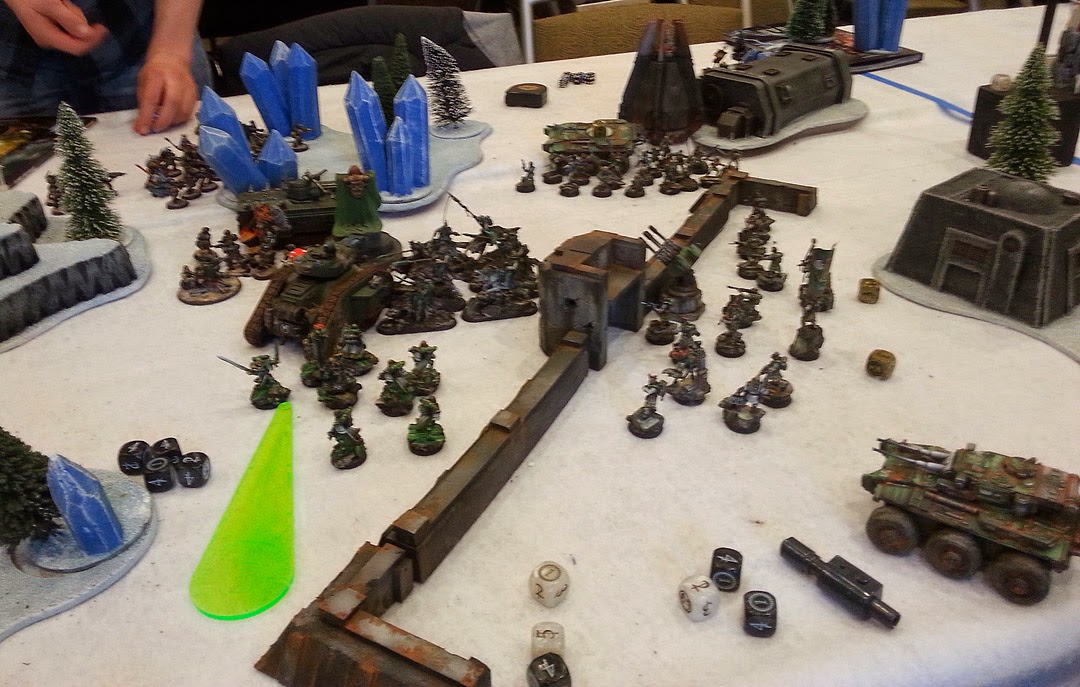 You can see that I am trying to get as many squads into those woods as possible.  On the other hand, they were mysterious woods with lots of Angry Birds inside that would pecj you to death if you disturbed them. 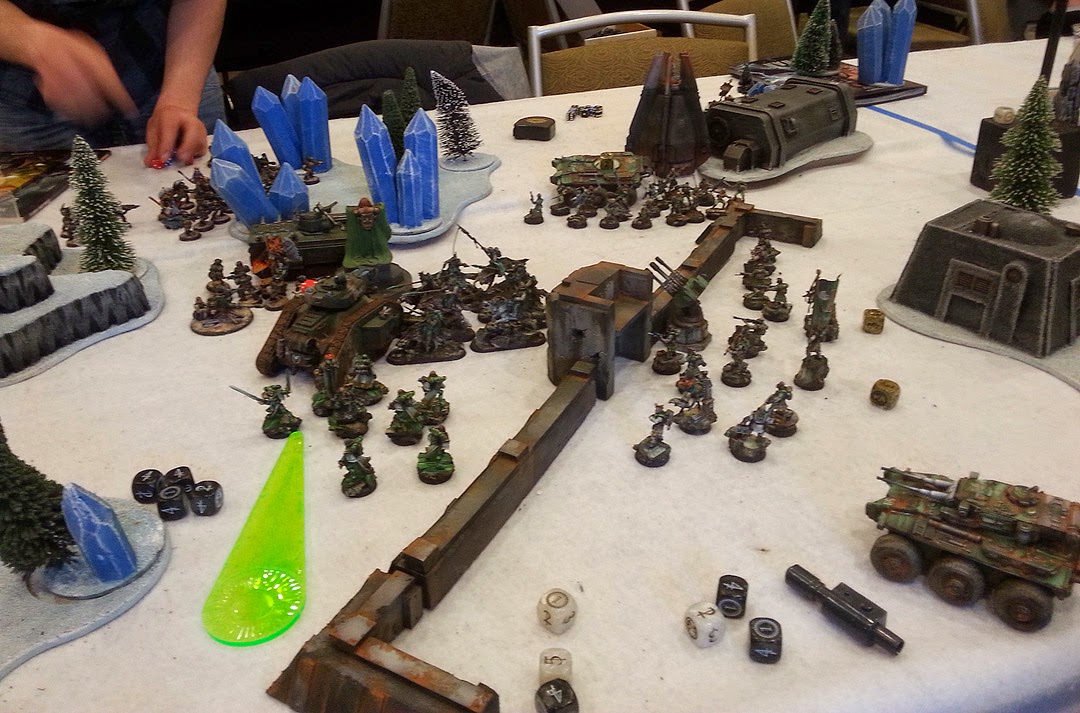 The conclusion.  The Guard won.  Just the wrong one, infortunately. 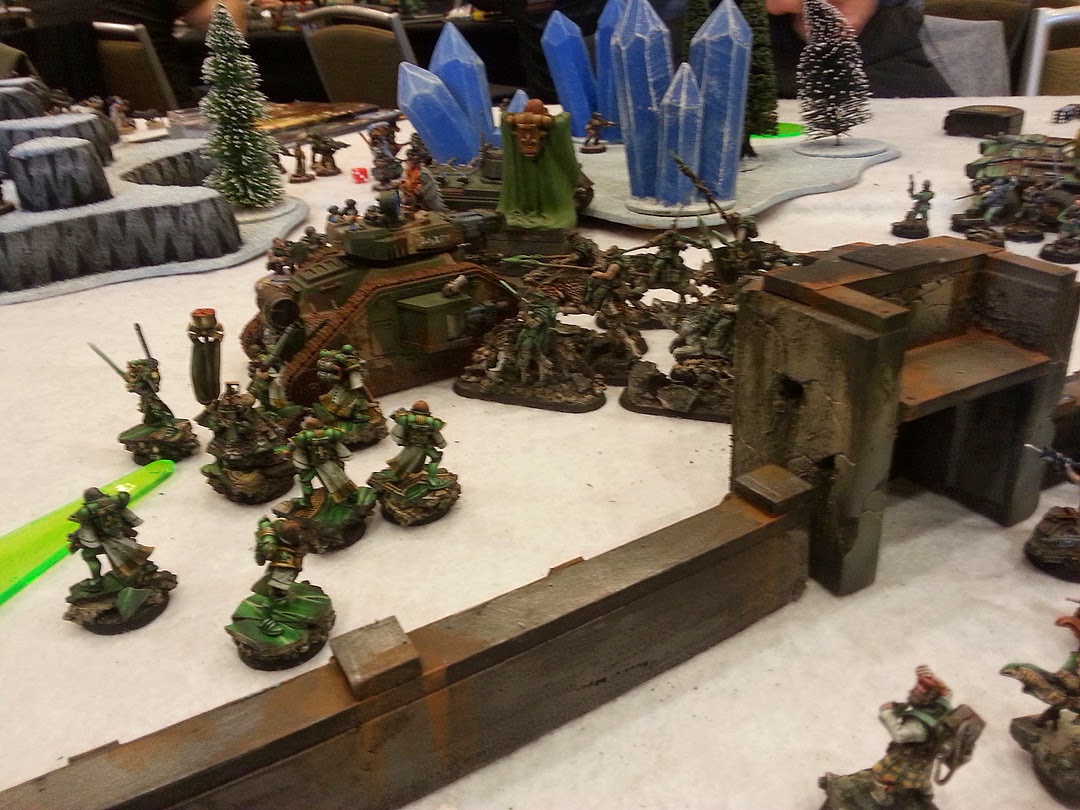 Posted by wappellious at 12:43 AM No comments: