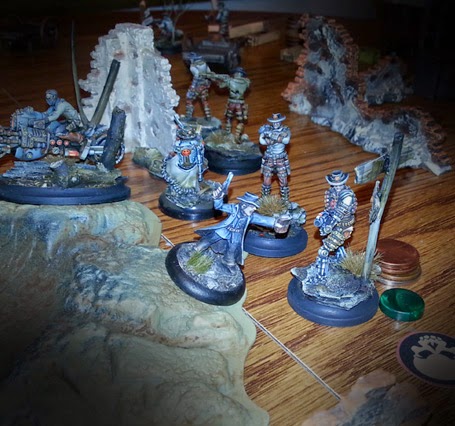 With the first test fight out of the way, we set down to a second matchup between the Lawmen and the Outlaws.

We each made slightly different lists.  Rich took a different boss, and a Dark Council.  Yay... Outlaws with even MORE influence!

Here's my force... Wyatt, Deputy Berenger, the Interceptor, some hired hands, and so on.  I really wanted to make better use of the Interceptor this game, as well as Wyatt! 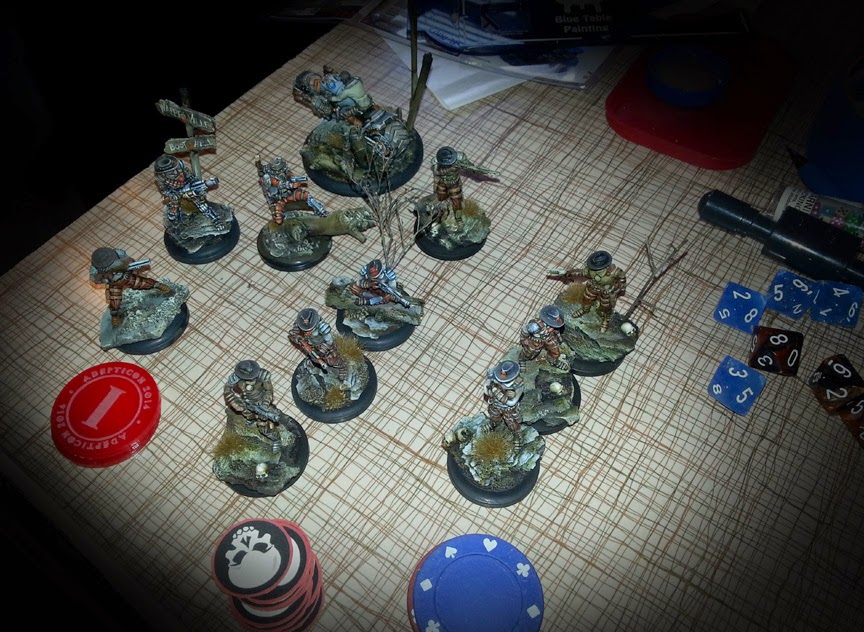 I tried to do the Forward Echelon thing, but that is really not all that helpful, at least with my style.  I prefer to create more angles against the opponent, and FE wants to put you all in one big mob.

With only 3 possible activations per round, it is even more difficult to keep that up. 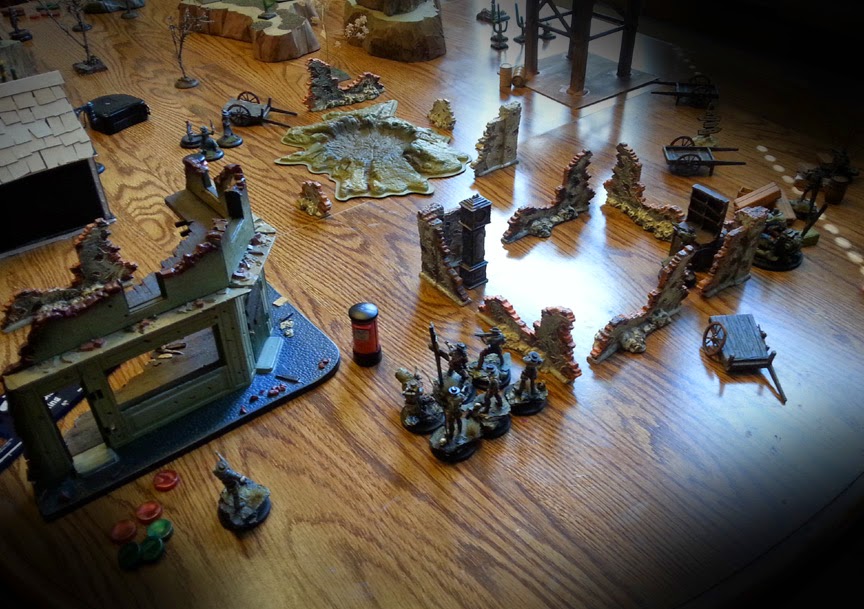 Here's the board, with the Outlaws on the left. 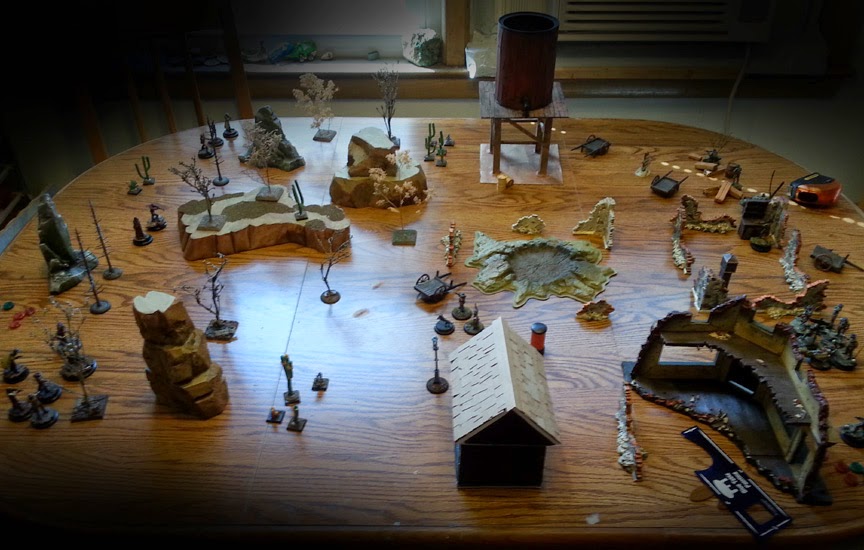 The Lawmen advance through the streets of Wappelville. 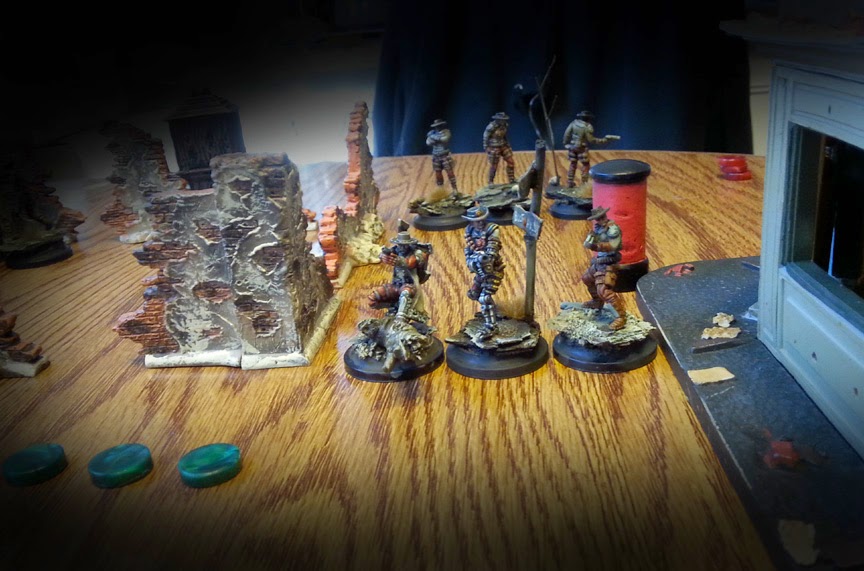 In this game,  I was going to try to stay out of buildings, based on what happened in that first test match.  The Outlaws blew up the buildings with me inside... so that was not gonna happen again! 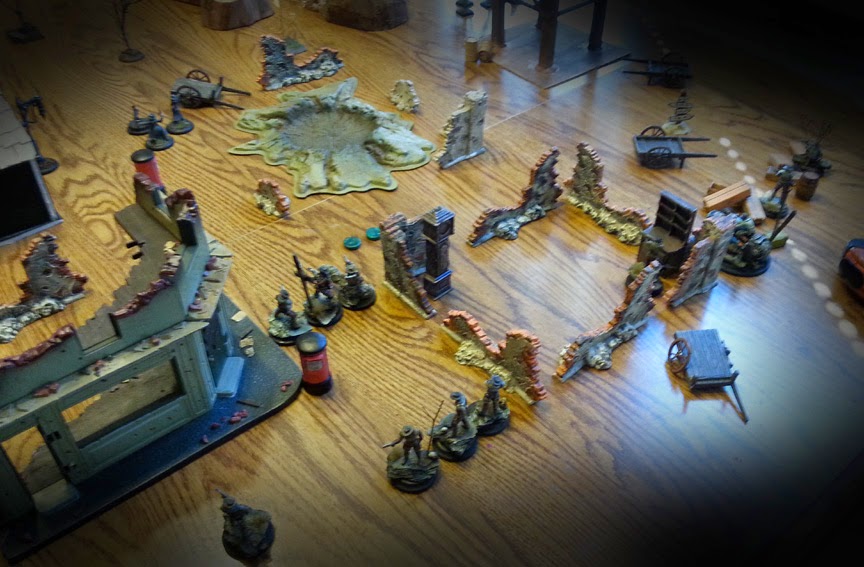 These buildings were already ruins, so I figured they would be safer :-) 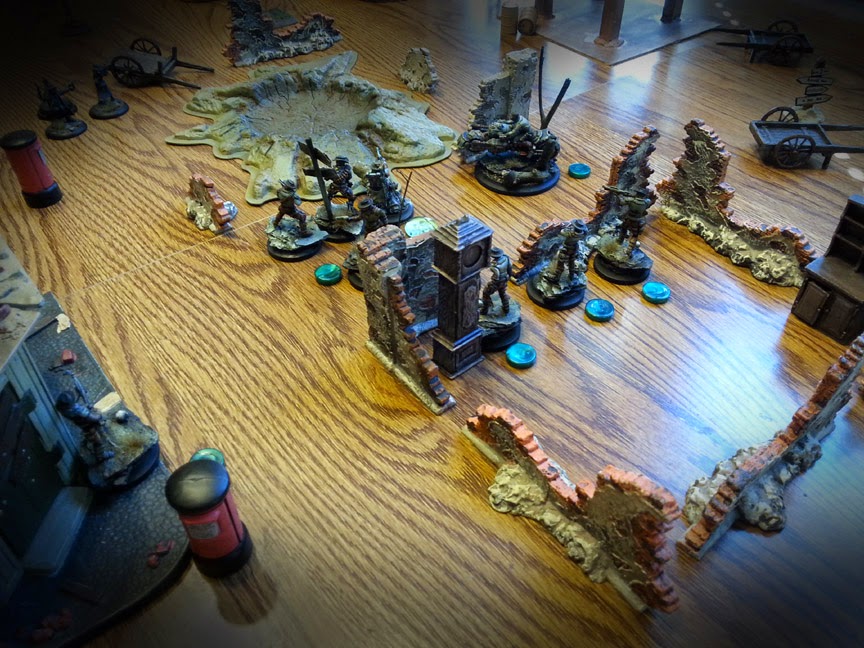 Speaking of blowing things up... remember that big water tower?  This is what it looked like after a shot from Deputy Berenger!  The heck with the citizens and their need for vital water!

It caught one guy under the rubble, and the second was now exposed to close in fire from the two Rifle Hired Hands waiting nearby. 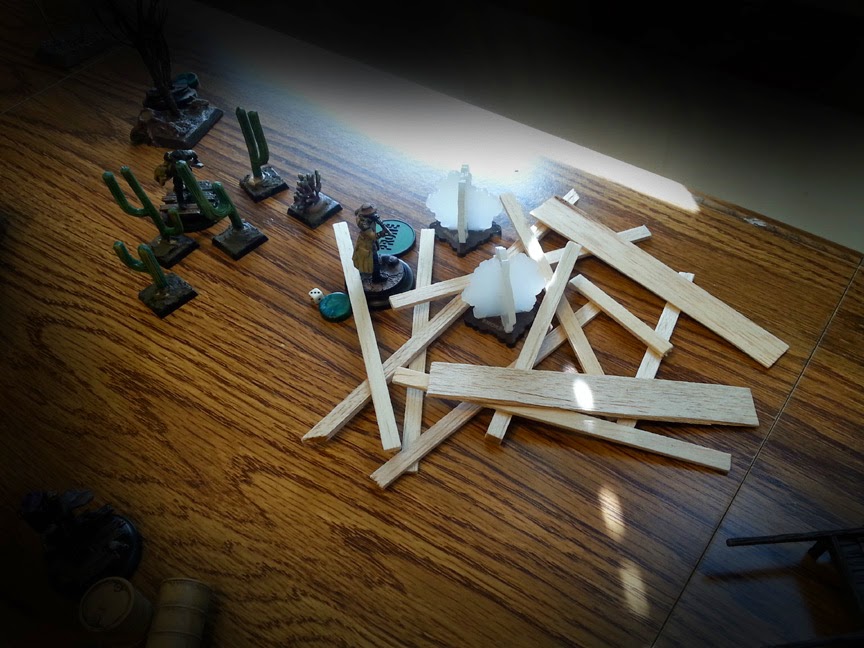 I advanced the Interceptor to keep dropping templates on Outlaws attempting to move into town. 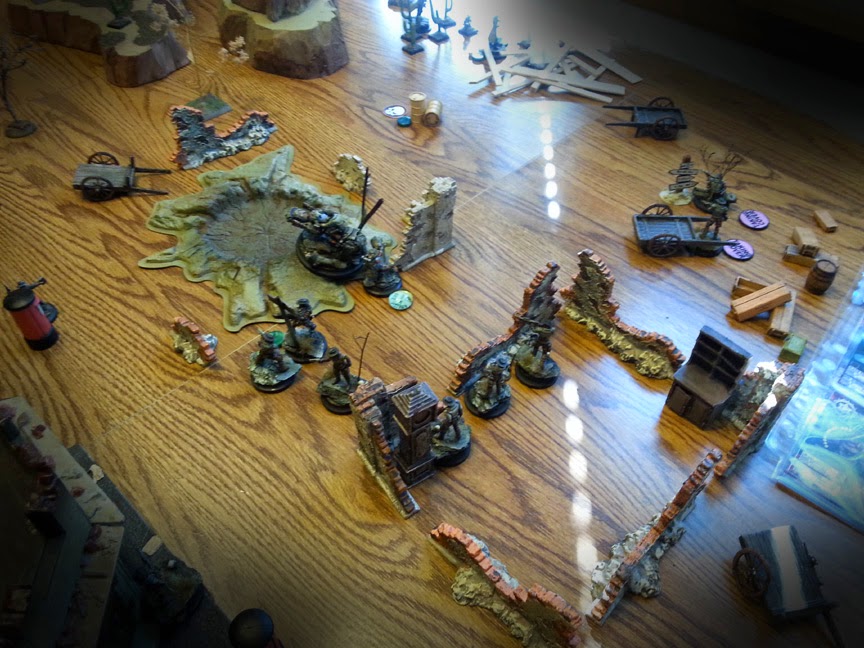 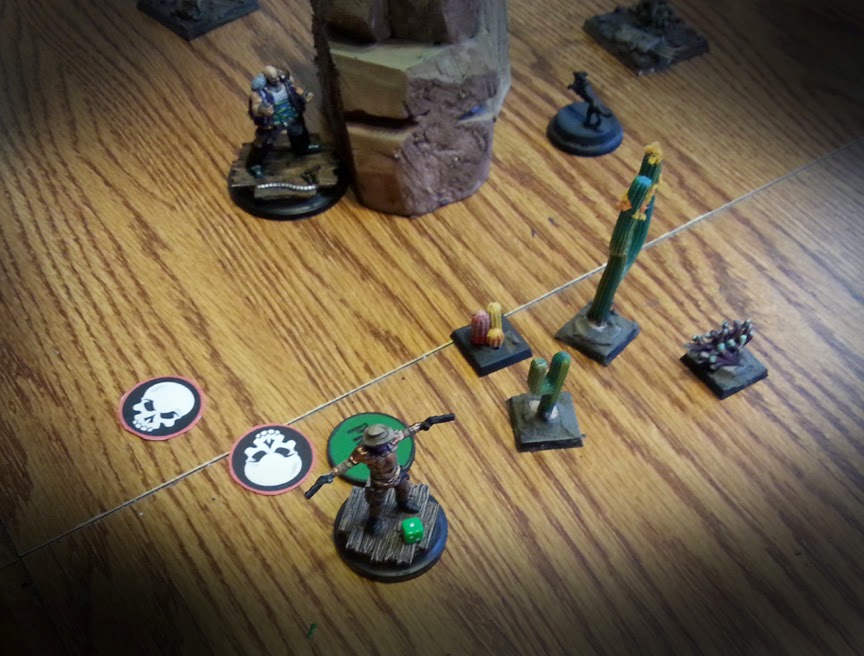 This group in the center had a very commanding position, and could drop a variety of weapons fire at all angles. 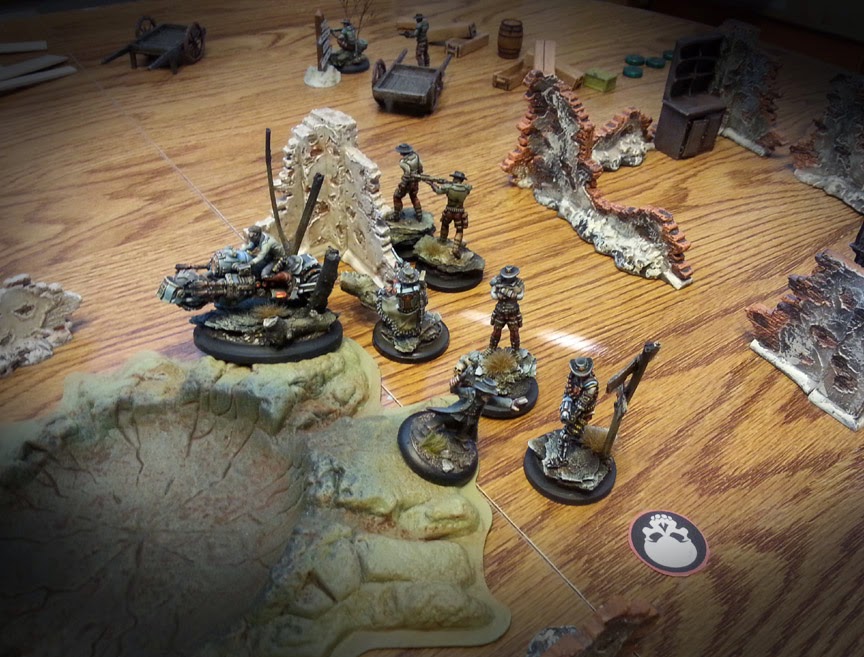 The Dark Council could only stand by and watch as more and more Outlaws were taken down, one by one... 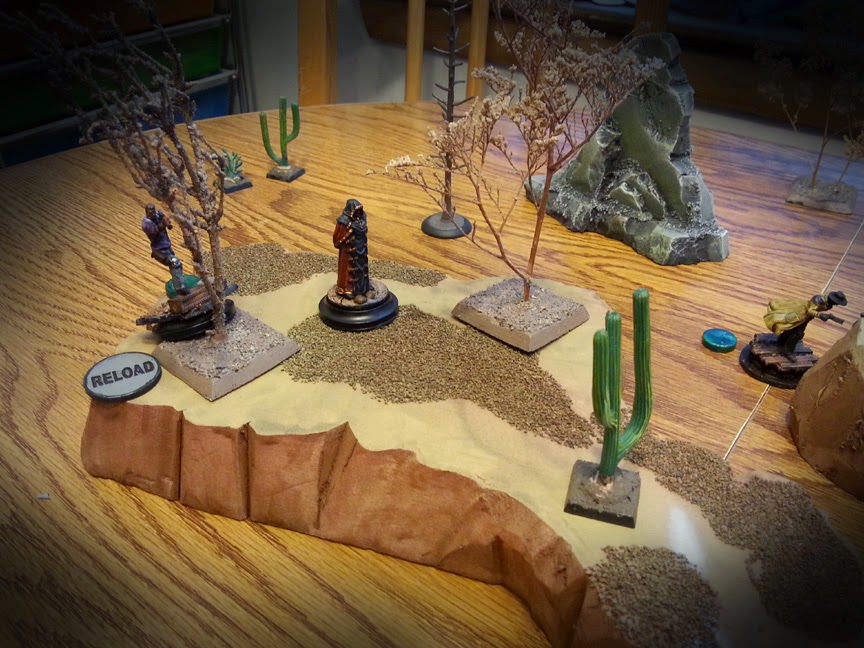 The local Preacher attempted to intercede on behalf of the residents, ordering the Lawmen to end their attack on Wappelville.

It's a very cool element of this game... random citizens that roam around the battlefield!  They really are fun, as they can even get in your way... or provide cover if you are ruthless enough... 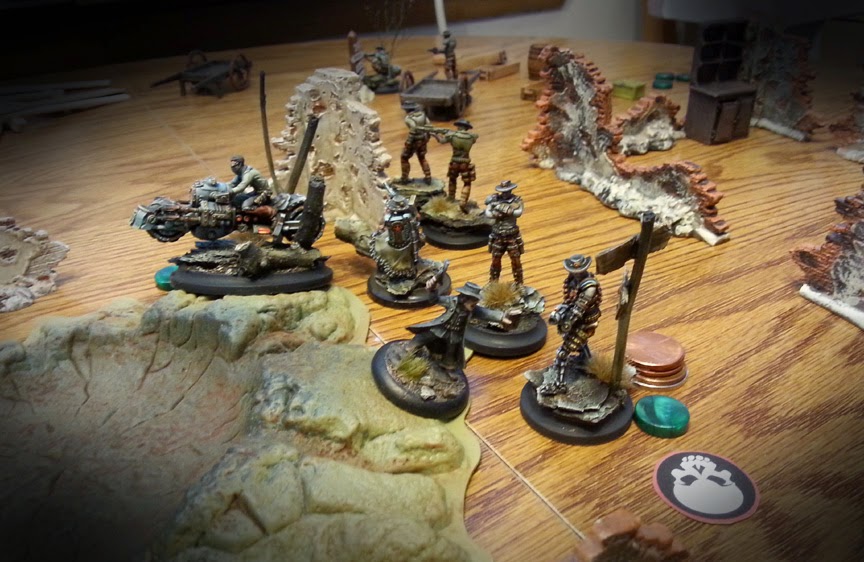 This heroic Lawman stood right in the way of Friar Tuck, preventing him from using his shotgun template on my big group in the center. 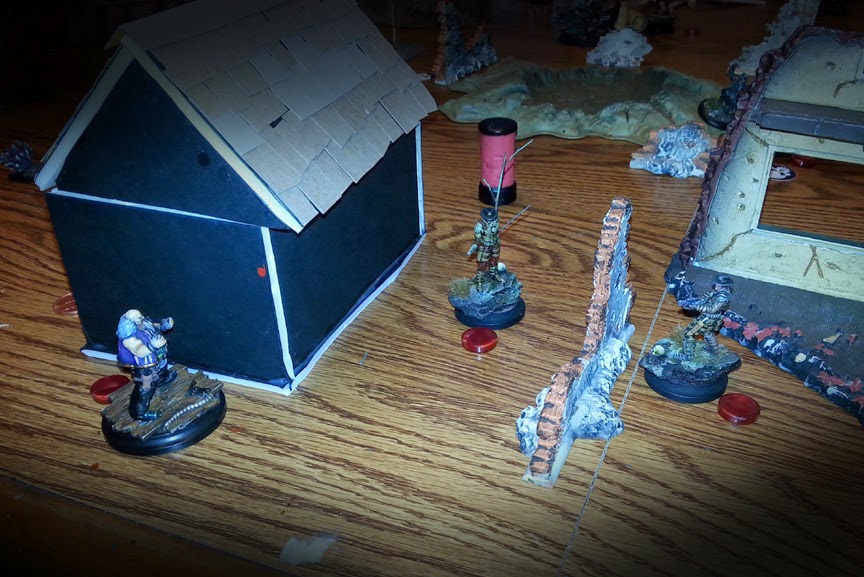 The Preacher moved to the Interceptor, pleading once again for them to stop the carnage. 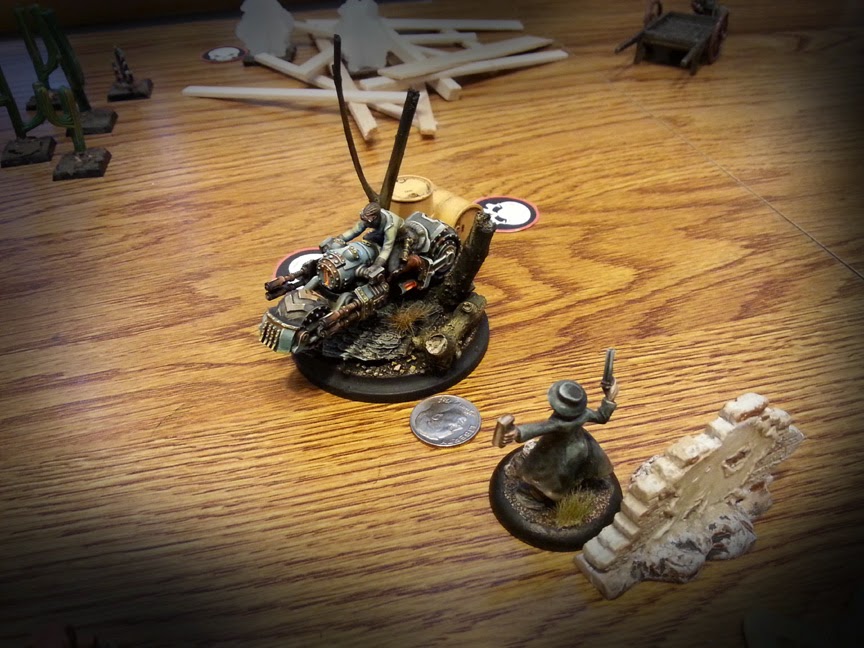 But the carnage continued, until only Billy the Kid remained.

Forced from his hiding place, all the Lawmen concentrated their fire, cleaning up the Town of Wappelville once and for all.  Or did they? 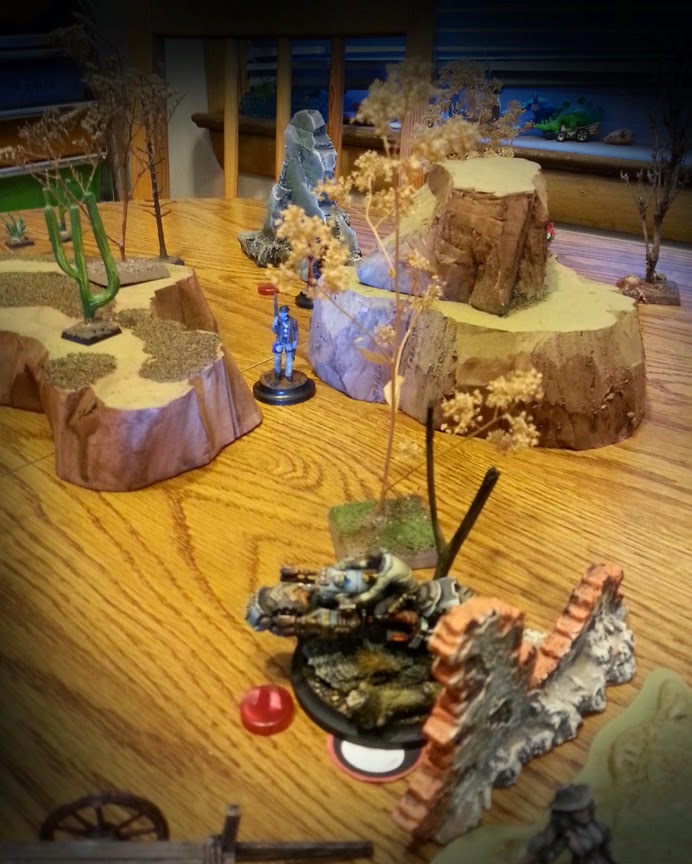 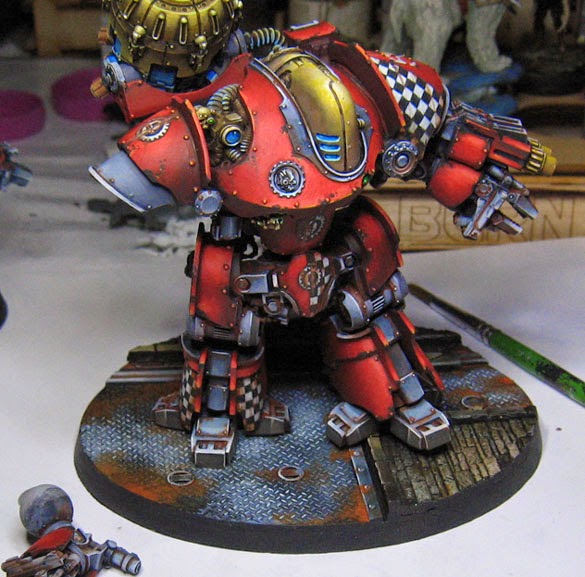 OK folks, here's something rather giant for you.  This is the Thanatar Siege Automata.

The picture below gives you some idea of the size of this thing.  The Castellax standing next to the legs is Dreadnought sized... on a 60mm base. 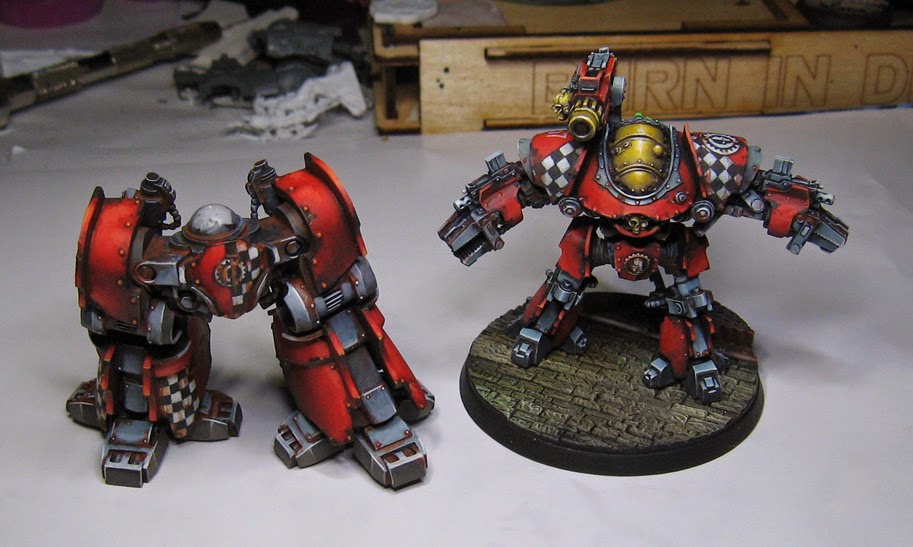 I knew I was in for a treat when most of the on line searches for how to assemble this ended (or began) with "Good luck". 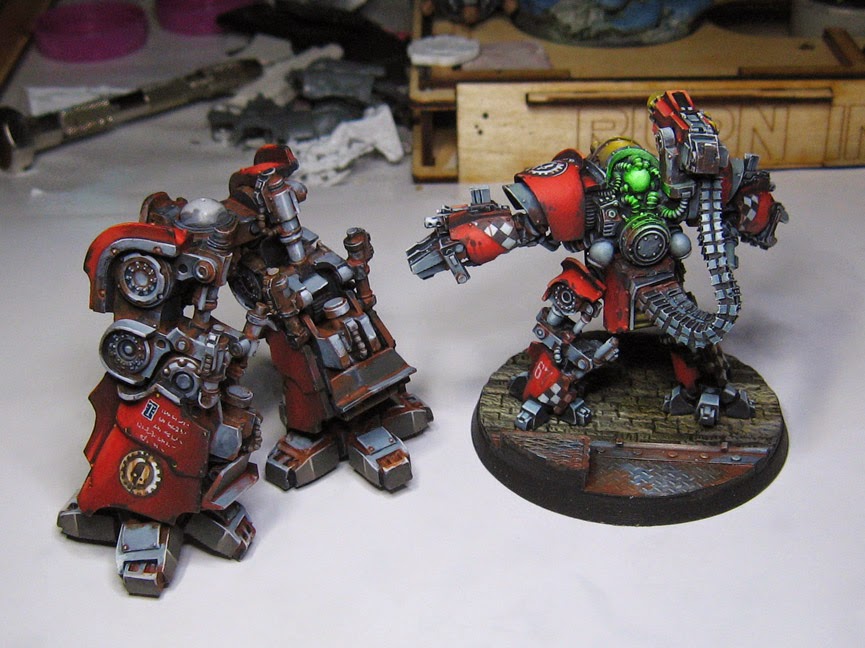 I won't horrify you with my screams of delight as I assembled the legs and arms prior to painting.  I am sure I created all new words.  A language of vulgarity at new heights of creativity :-) 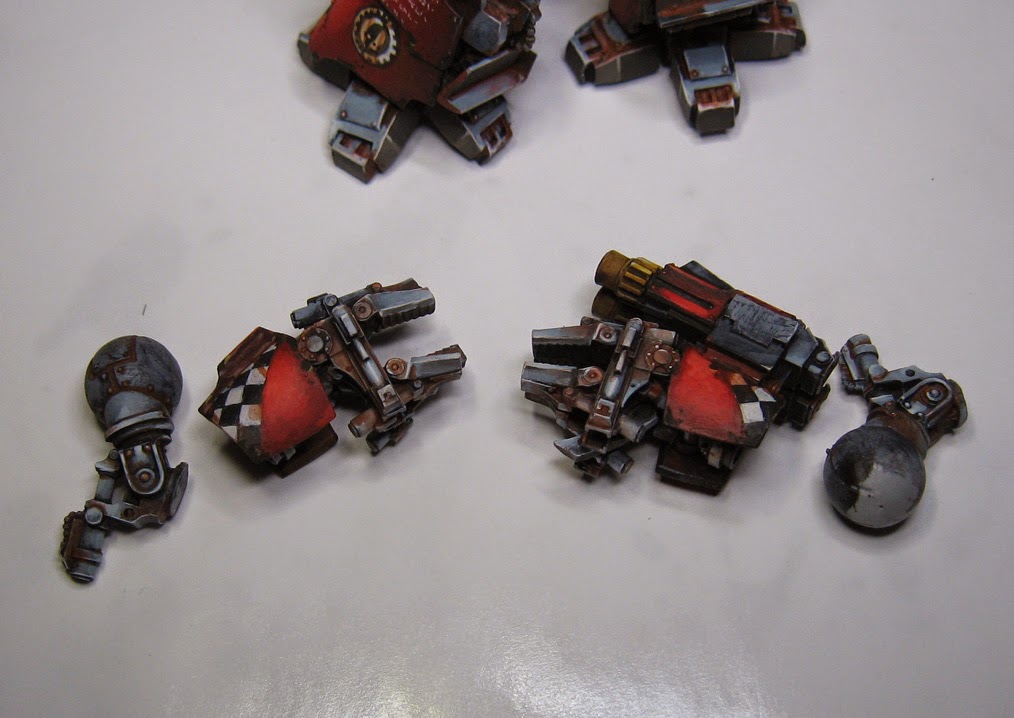 These types of ball joints can be very deceptive, in that you think it offers you loads of ways to position the arms.  I learned from the smaller Castellax that this was definitely not the case. 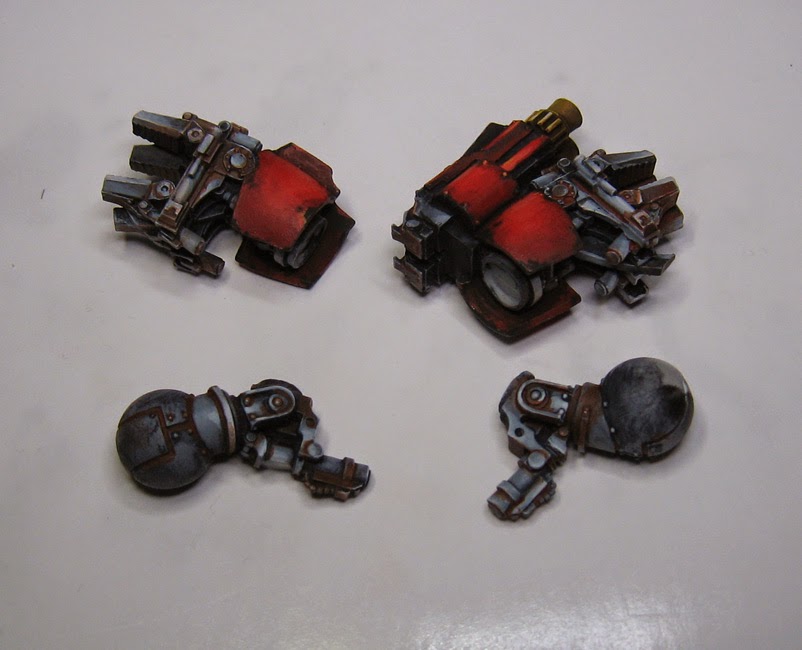 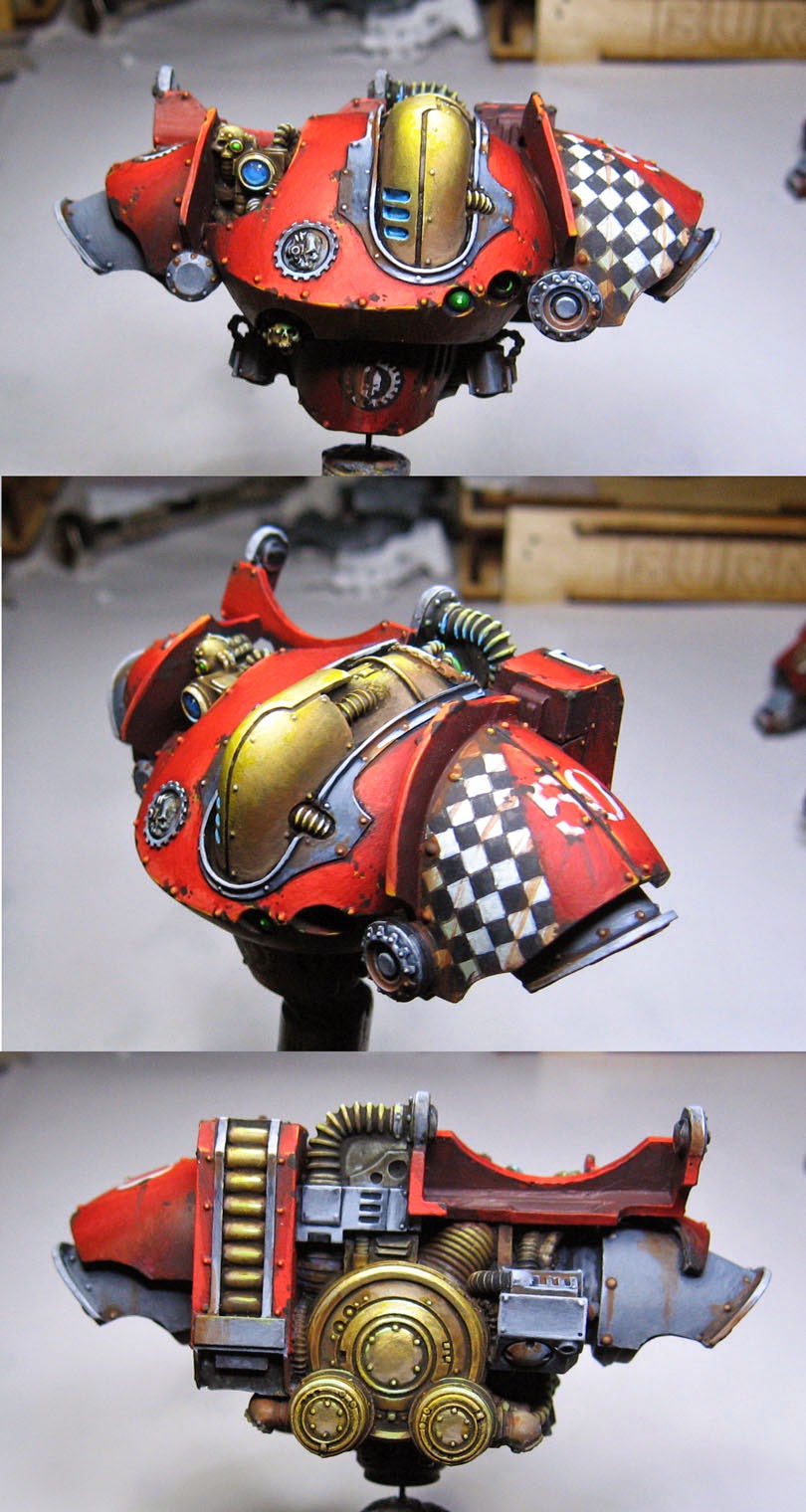 Topped with a massive gun. 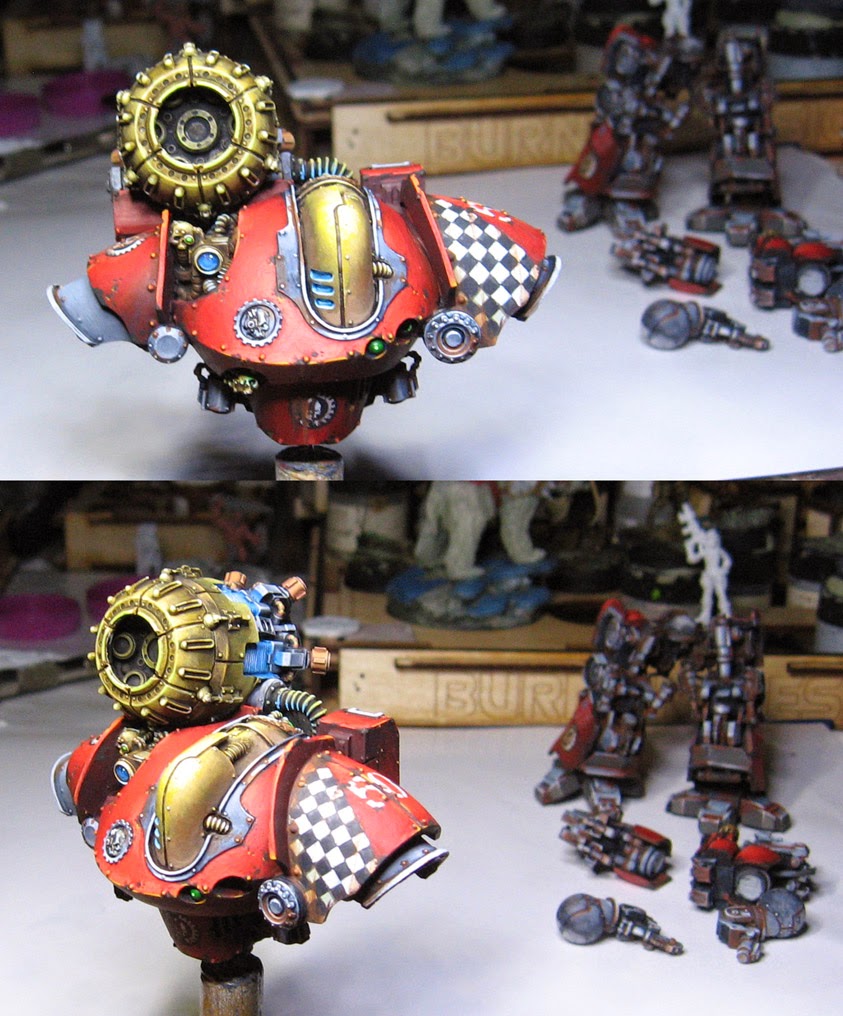 Figuring out how to get these pieces together and mounted on the base was not something I had looked forward to doing. 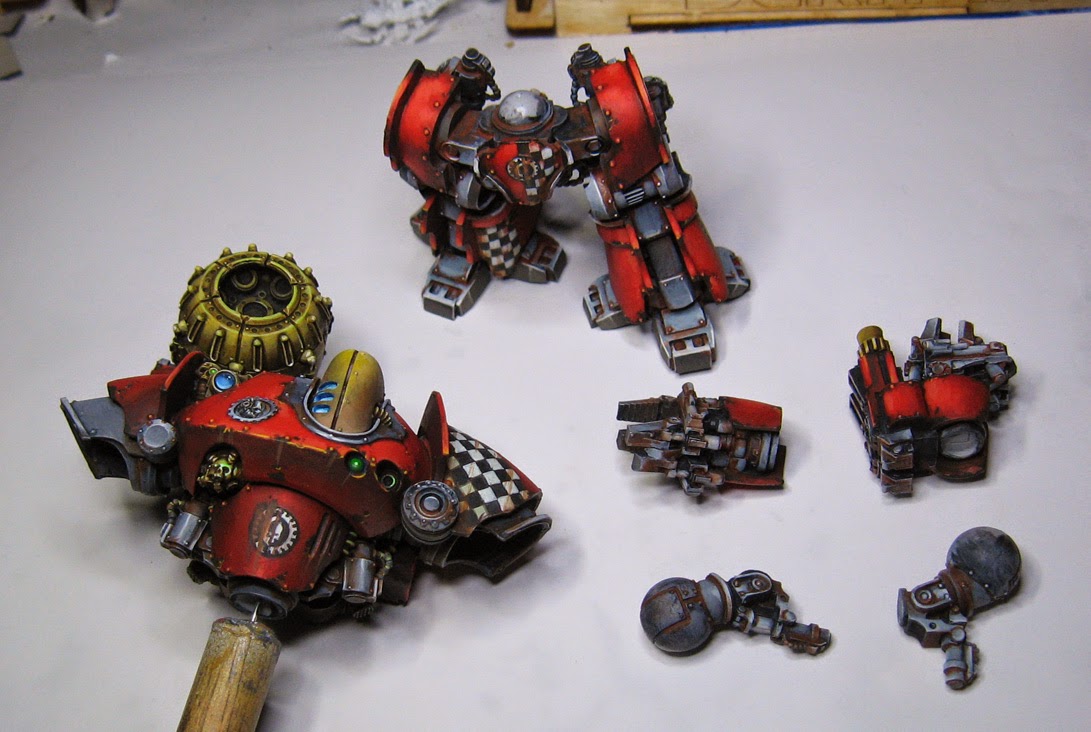 It took at least an hour just to get this far.  Right now the torso is sitting on the pin, which is stuck into the leg assembly. 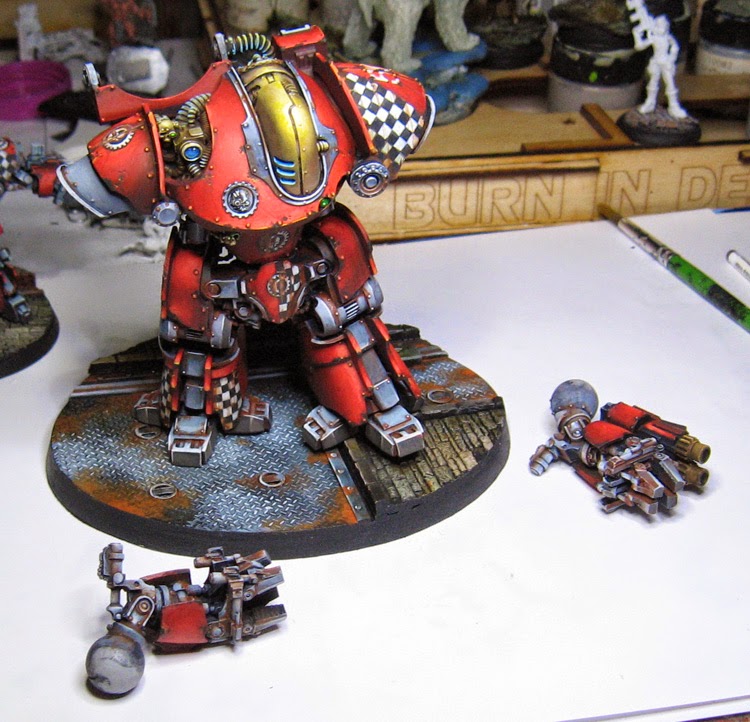 I actually used the gun as additional weight to keep the feet stuck to the base as the glue dried. 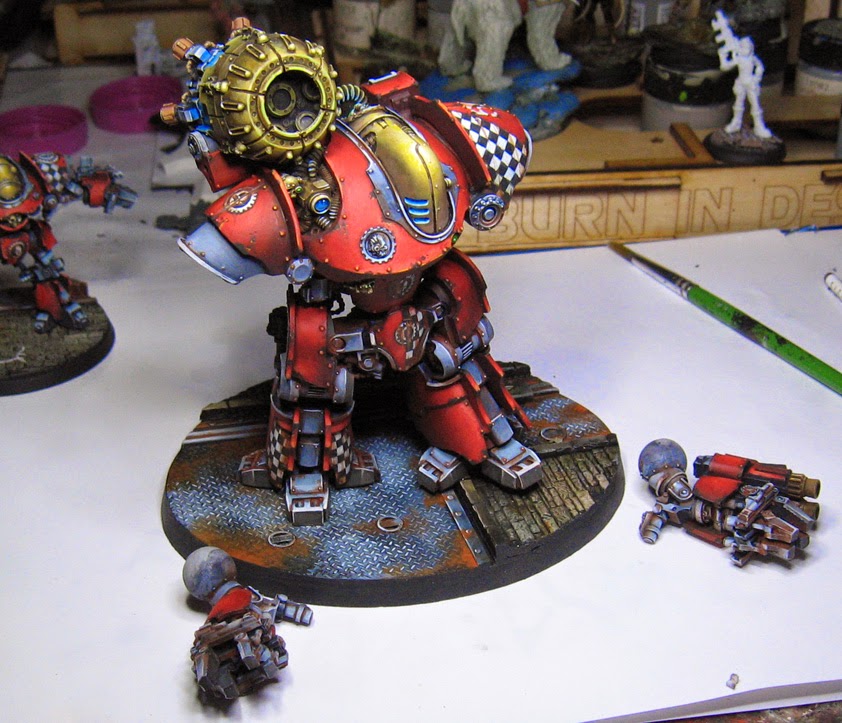 I tried to position the arms in an interesting way, but this is where I was reminded about the restrictive way the joints work.

The final challenge is to get those ammo feeds to fit.  I don't even know if that will be possible right now, but I need to let all this set for quite a while.

With the Castellax, I had to nearly melt the ammo feeds with a hair dryer to get them into position.

I am sure that will be required here.  To make it more difficult, there are two ammo feeds stuck together.  I predict more interesting words to describe the heritage and genealogy of whoever created that particular idea. 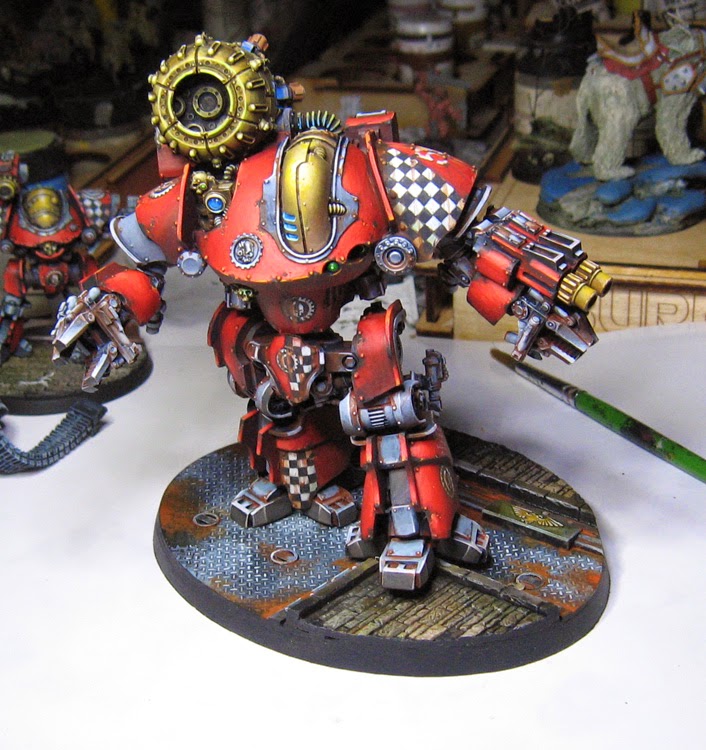