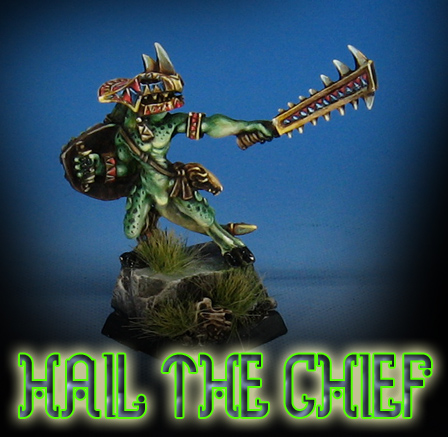 This Skink Chief was one of the little surprises that I would have in my Skink and Kroxigor units.

He, along with a Skink Priest, would be embedded in the largest of my "Skrox" units, which contained 36 Skinks and 4 Kroxigors.  This was known as the "Skink Tank".

Despite it's size, it was very fast.  It had a lot of firepower with 36 shots, and had the 4 big beasties to lend some heavy hitting in combat.

It also had lots of ranks, banners and so on.  By placing a Skink Chief and Priest in the unit, it also had magical protection along with whatever special armaments the chief had.

I varied what each Chief would carry from unit to unit to match a certain purpose.  I think this guy would take the Ogre strength weapon...