Now that we are back from World Expo, it's time for a few images!

I was doing my usual painting exercises in the Badger booth, using all the new primer colors. 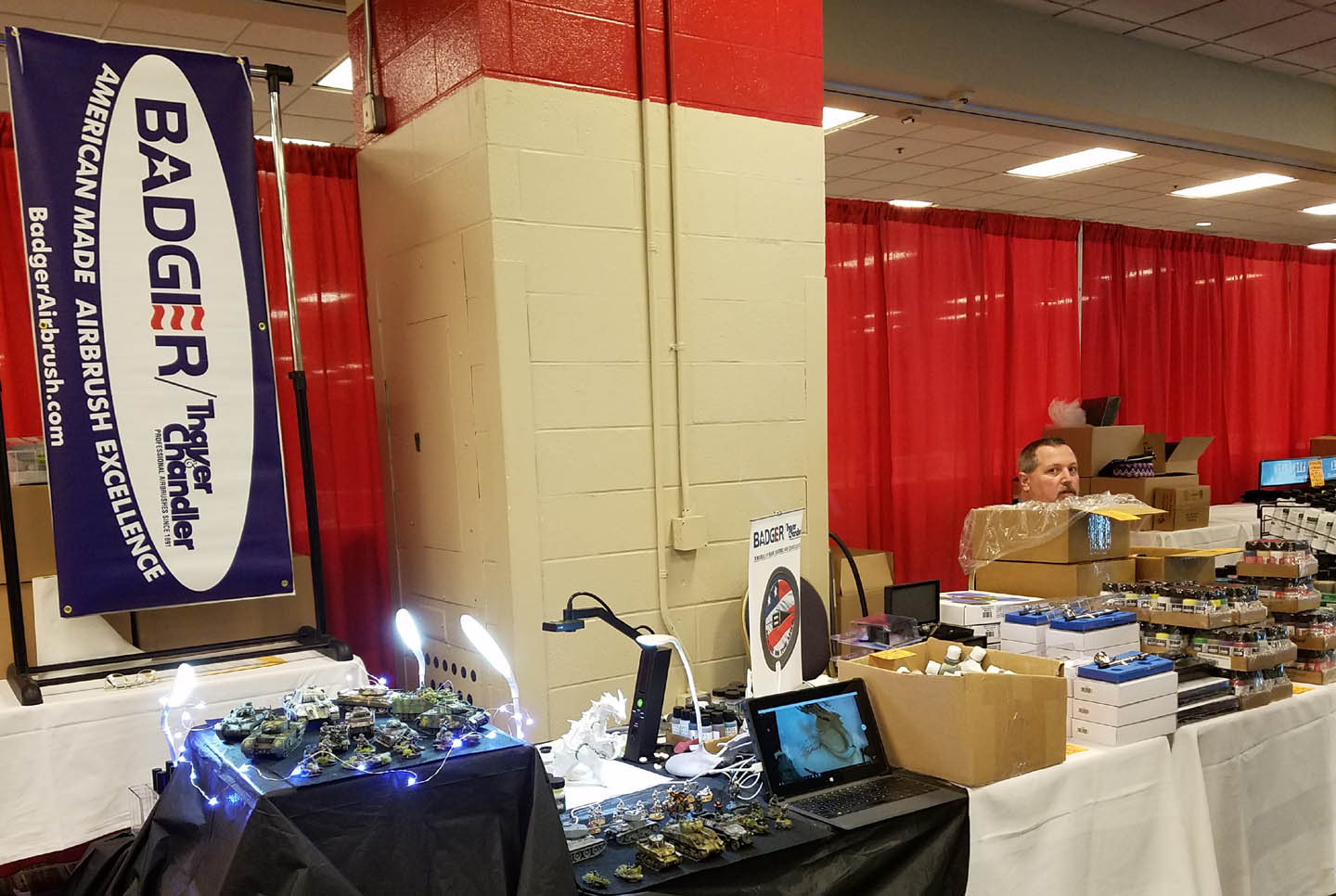 I had a collection of painted and partially painted Bolt Action figures and vehicles to show how I go about using the airbush and those nifty primers!

I also had a few of the BONES 3 kickstarter dragons with me, because I was itching to get some primer on those beasties as well.

You can see some model aircraft, and even a Gates of Antares skimmer. 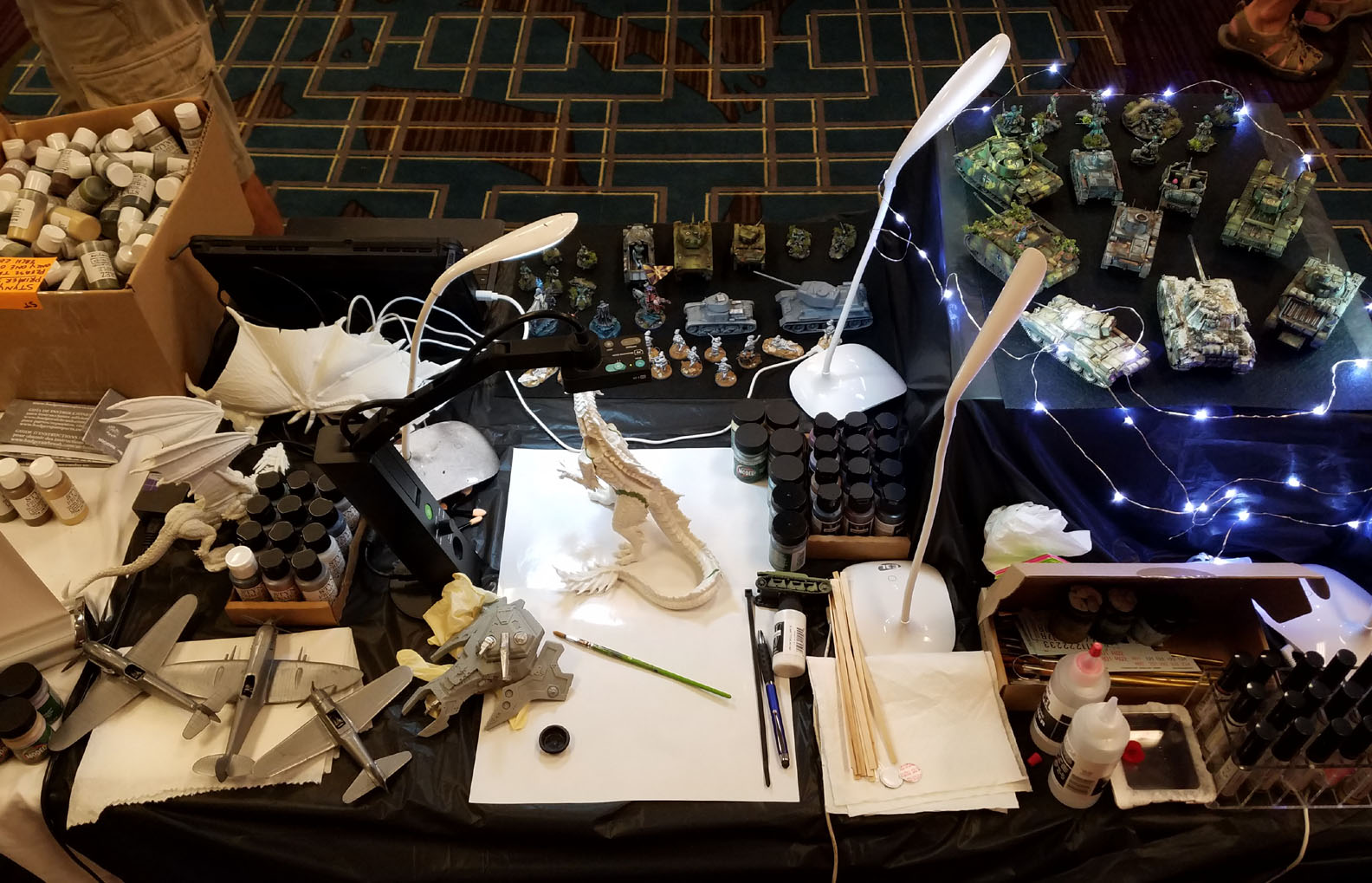 Ken in the booth getting ready to make a splash...

I tried to bring as wide a variety of subject matter as possible, and I think I managed to do just that.  On the right hand side you can see my first use of the metallic primer on the aircraft, imitating the underlying layer of airplane aluminum that would be revealed by the chipping medium later.

The Bersagleri are the next big Bolt Action airbrush project, so a few examples of that force were on the table.  In a complete surprise, I ended up with a few busts of Universal Monsters too!

Those are from Black Heart Models, who happened to be right across the isle from us. 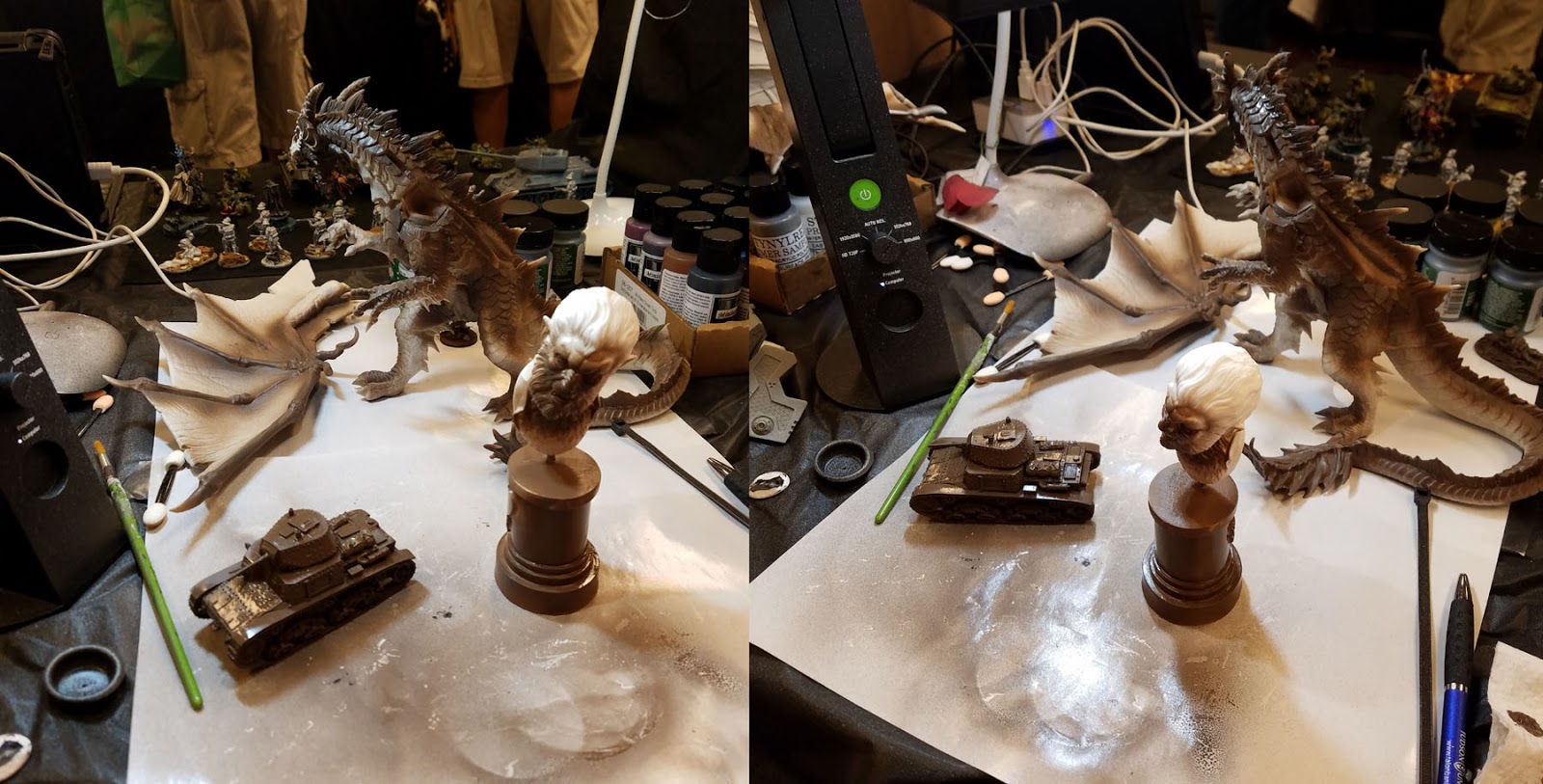 Wolfman and the BONES dragon get their initial layers of primer.  I focused on those new colors, as I mentioned earlier.  I used the new Ebony, pink and tan colors in combination with black and green. 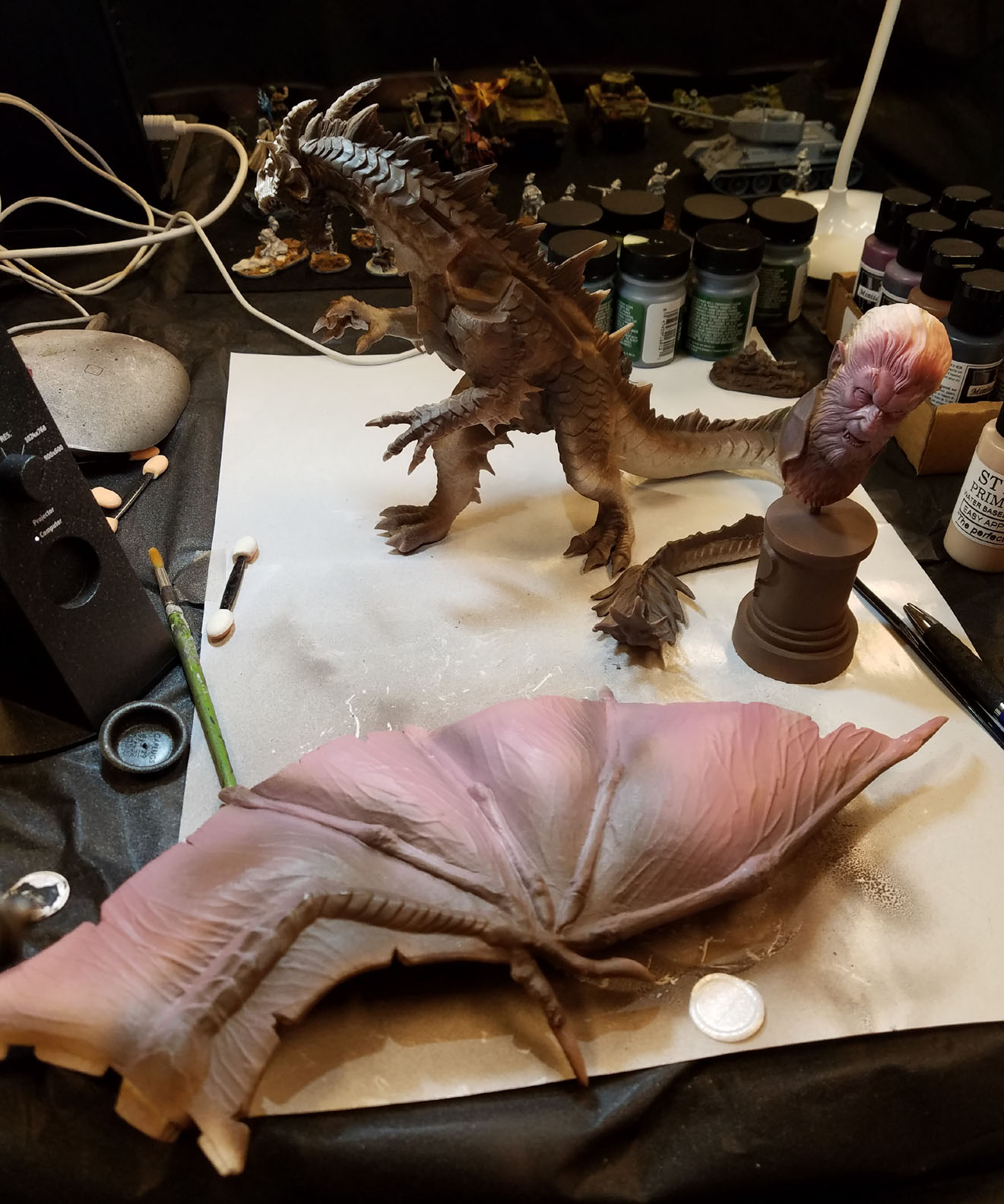 I especially had fun with the giant wings.  Until now, this is something that I would have to do with my large brushes.  While that does not take a very long time, it is certainly not as efficient as using the airbrush. 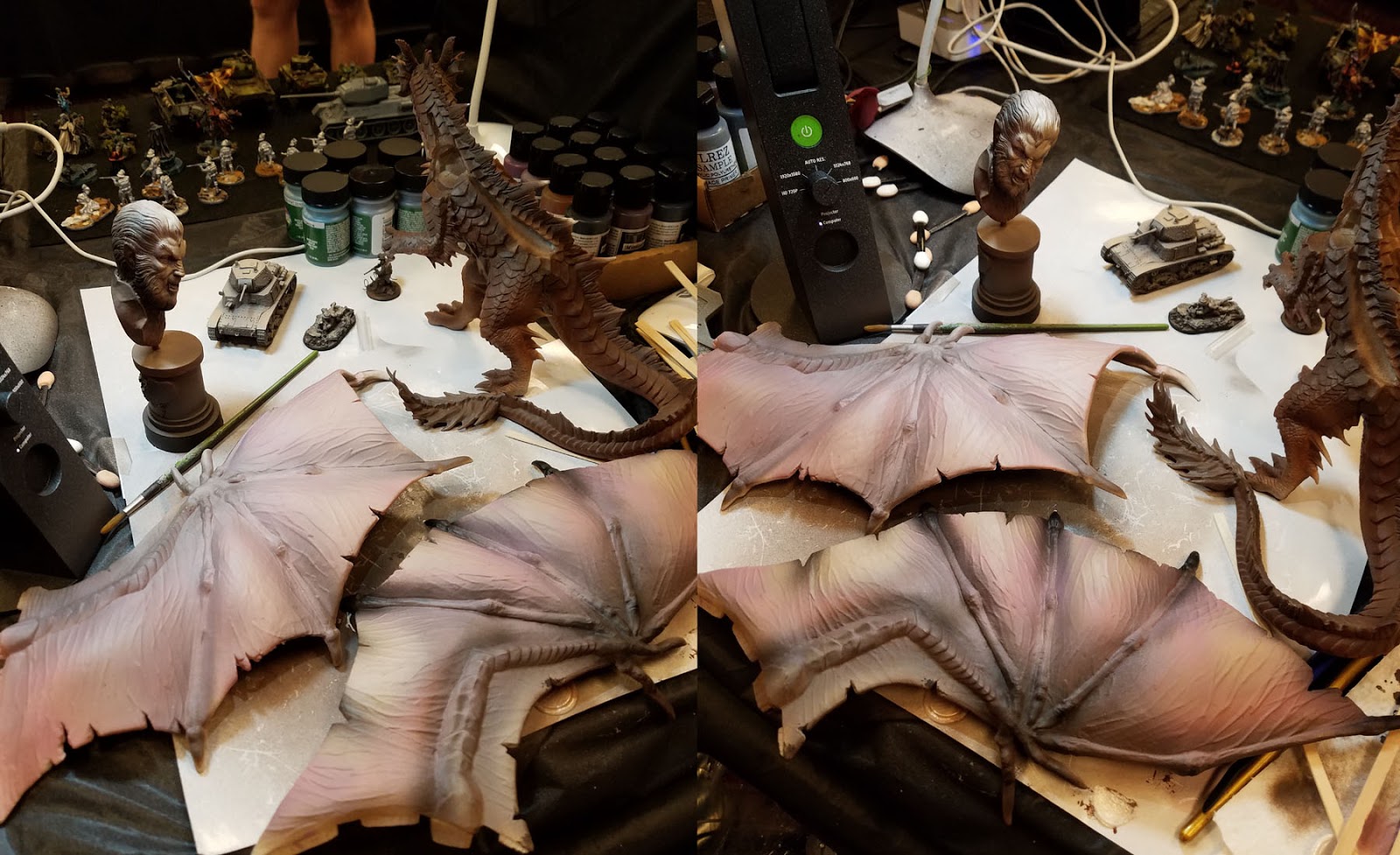 At the same time, I hit the busts with the same primer colors... even the Italian Bolt Action figures. 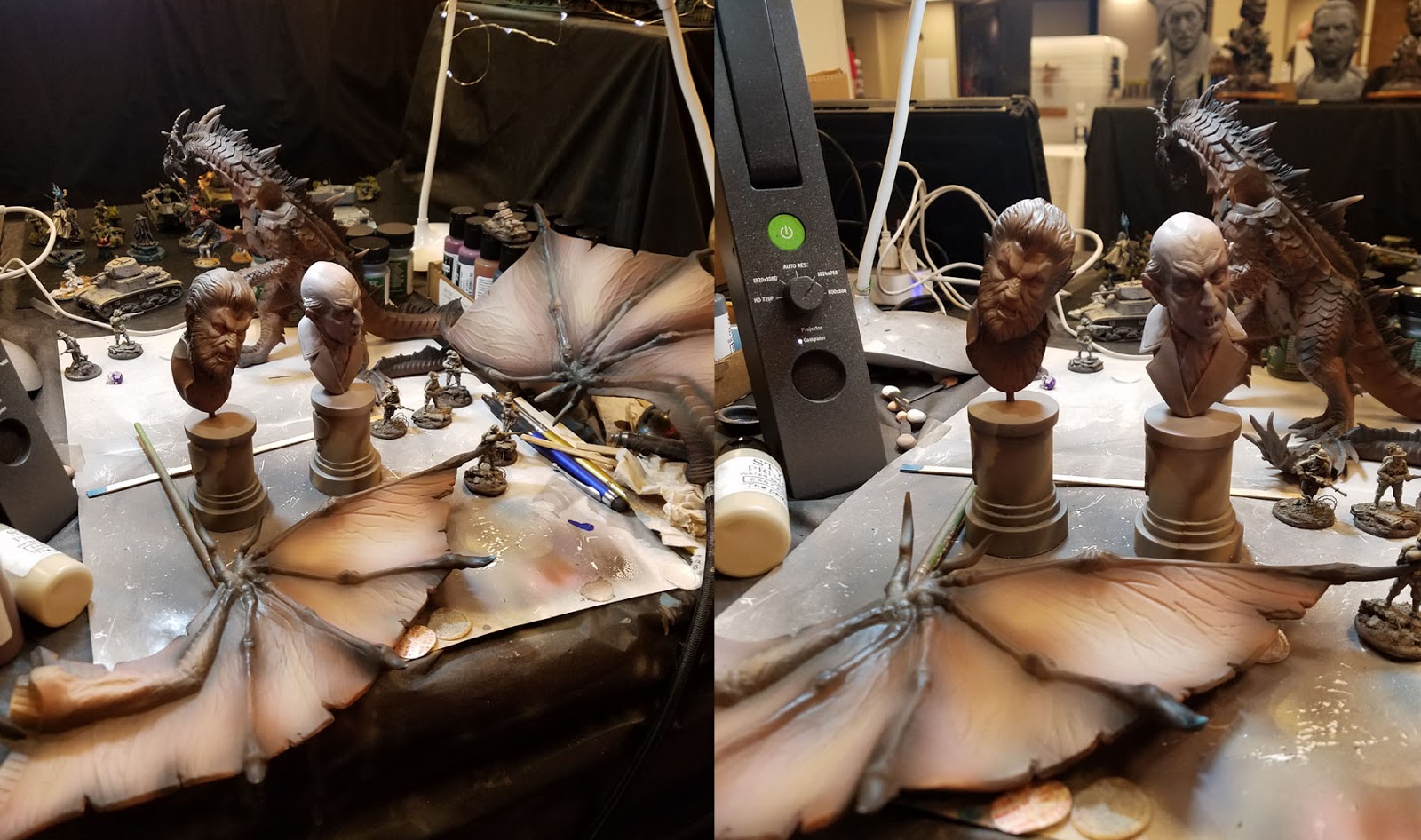 I experimented with more combinations of primer on the dragon and the busts, trying out the new blue primer color. 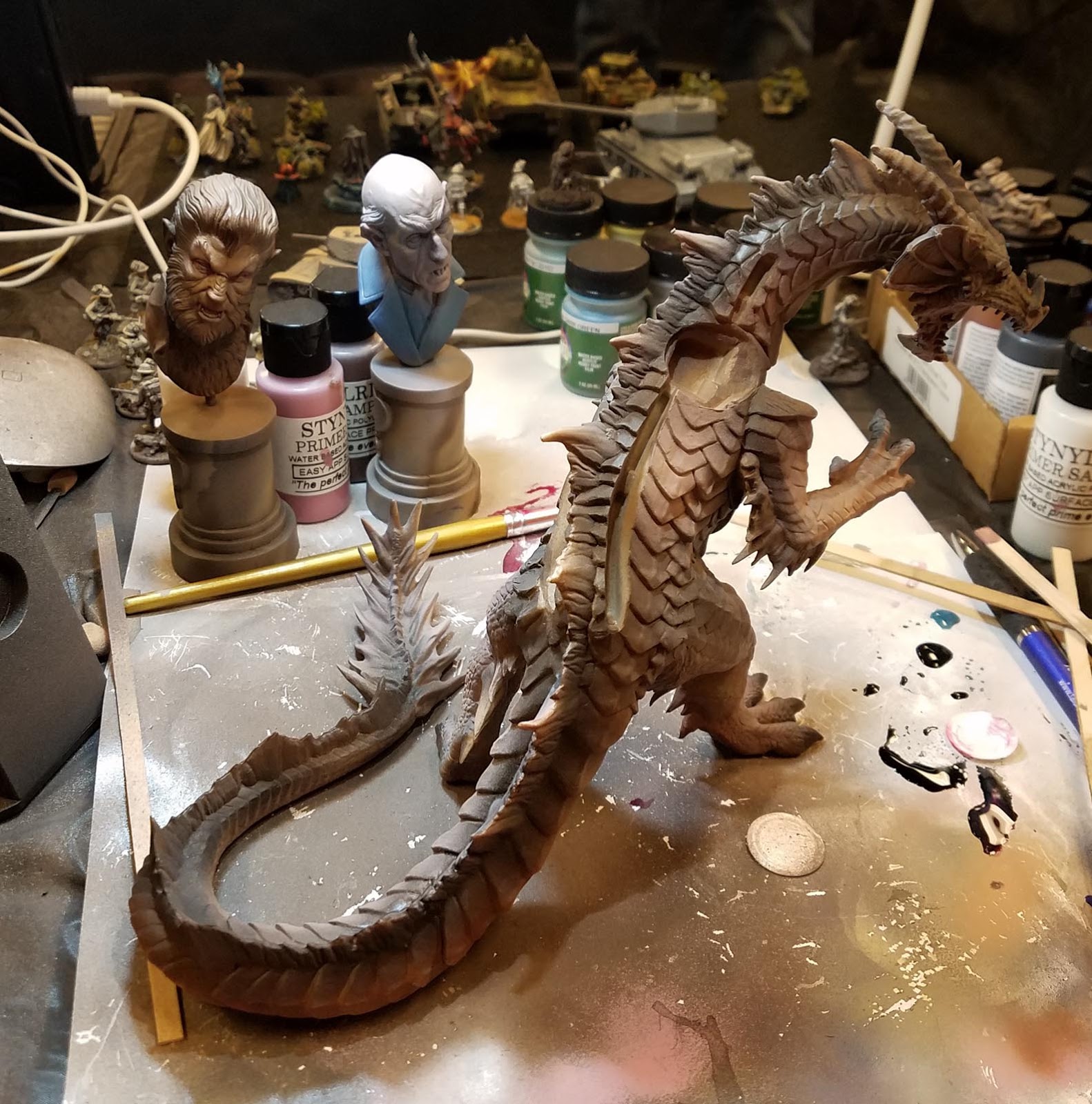 I took a few of the ghost tints and a few other regular colors to do some glazes on the dragon's head.  I wanted to demonstrate how you can work from the Shaded Basecoat established by the use of primer and airbrush. 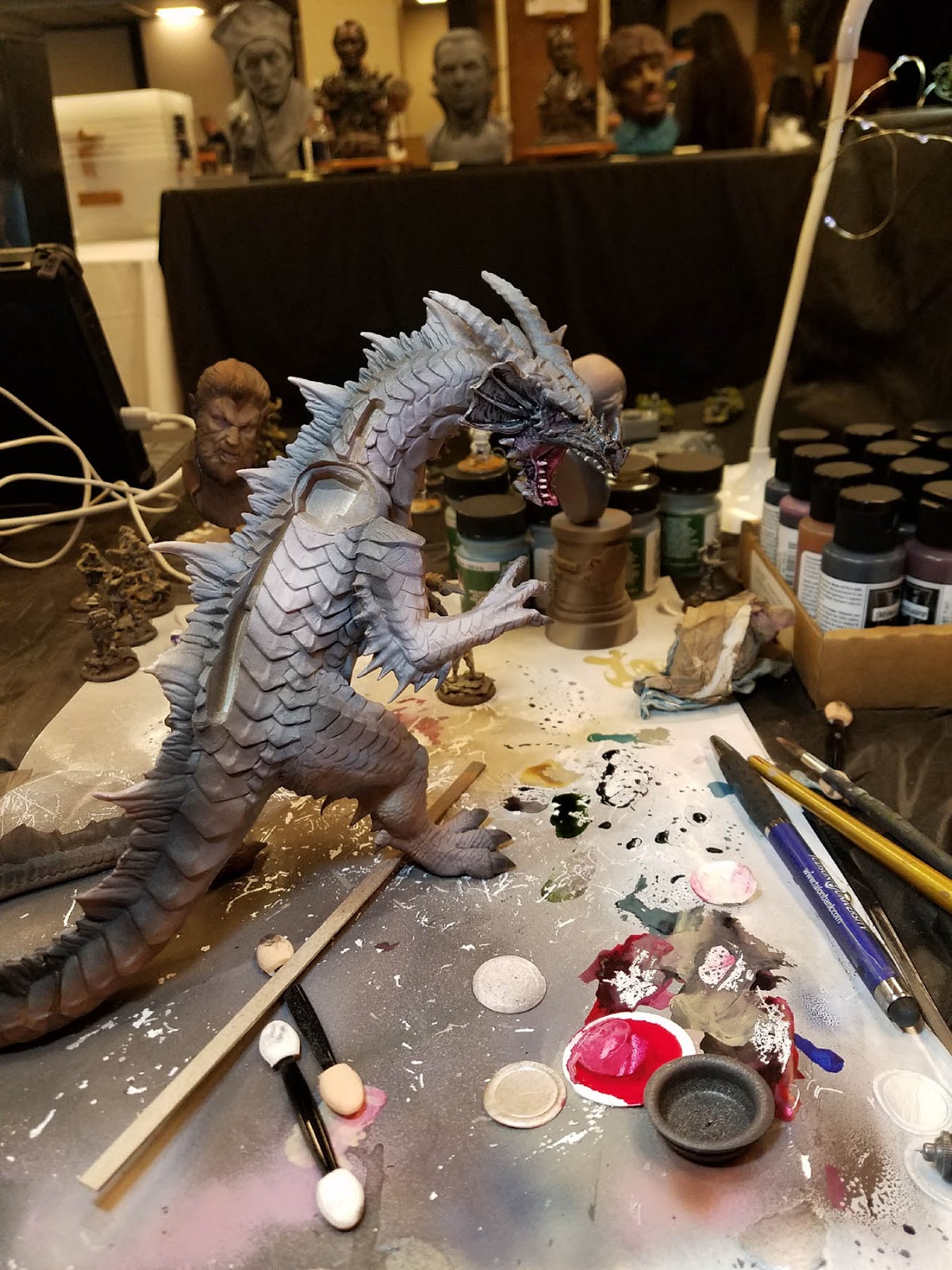 Another interesting part of the weekend was conducting a seminar.  I had to combine airbrushing with Mig AMMO products, which was a tricky task to pull off in just 90 minutes!!

Somehow I was able to do airbushing, weathering and oil painting on 3 different genres of figures in that time span. 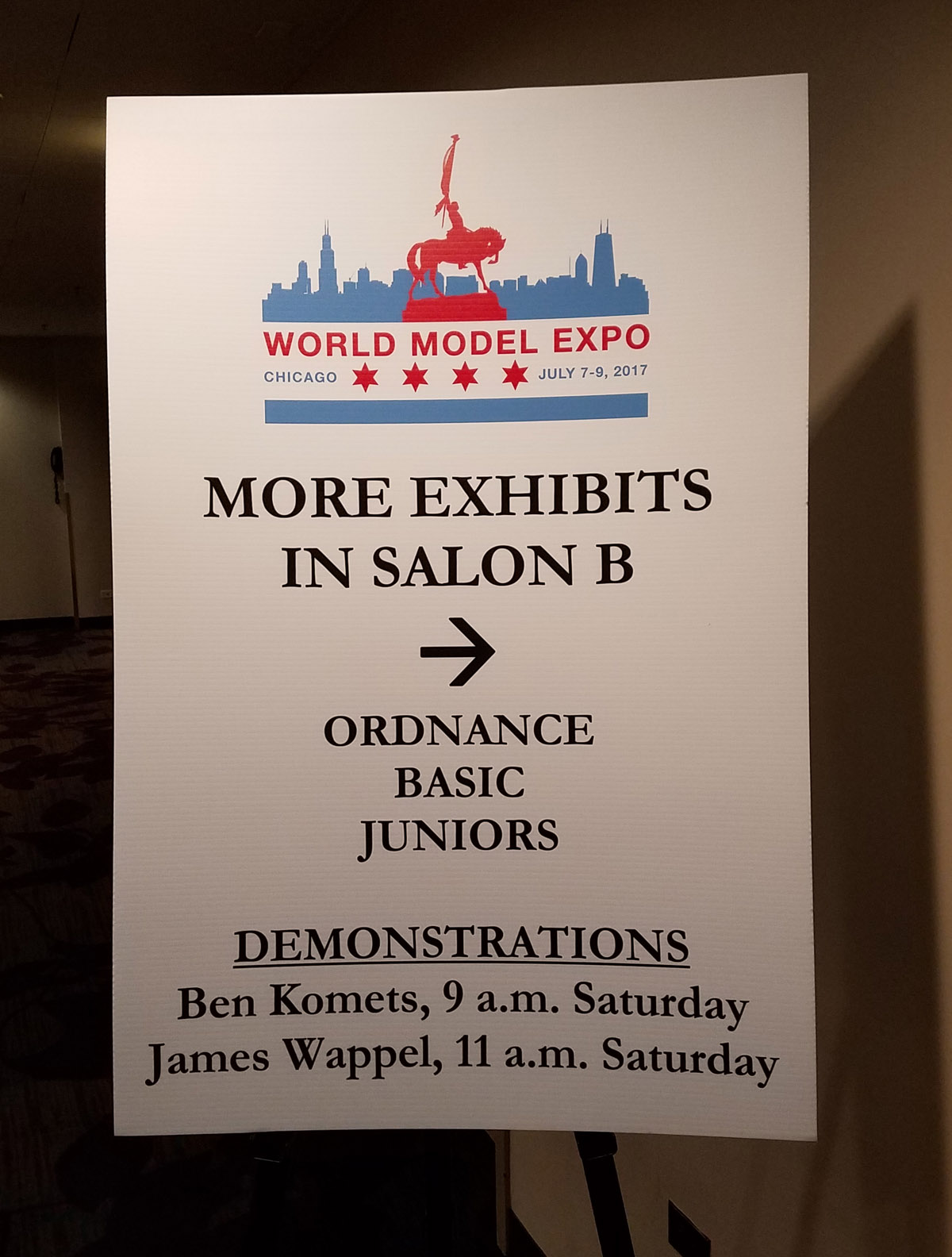 I wanted to thank Ken for letting me corrupt his booth all weekend, and to Dave for running the event.  Thanks also to George and the folks at Reaper Miniatures.

It was great to see everyone there too!

While we were away, more 1/48 scale kits arrived.  These are primarily going to serve as objective markers, scenery and the like.  I think these will really add to our Bolt Action games!

They have incredible detail, and they are quite inexpensive on Amazon.  You will see more of these in the coming months, along with the 1/48 scale planes. 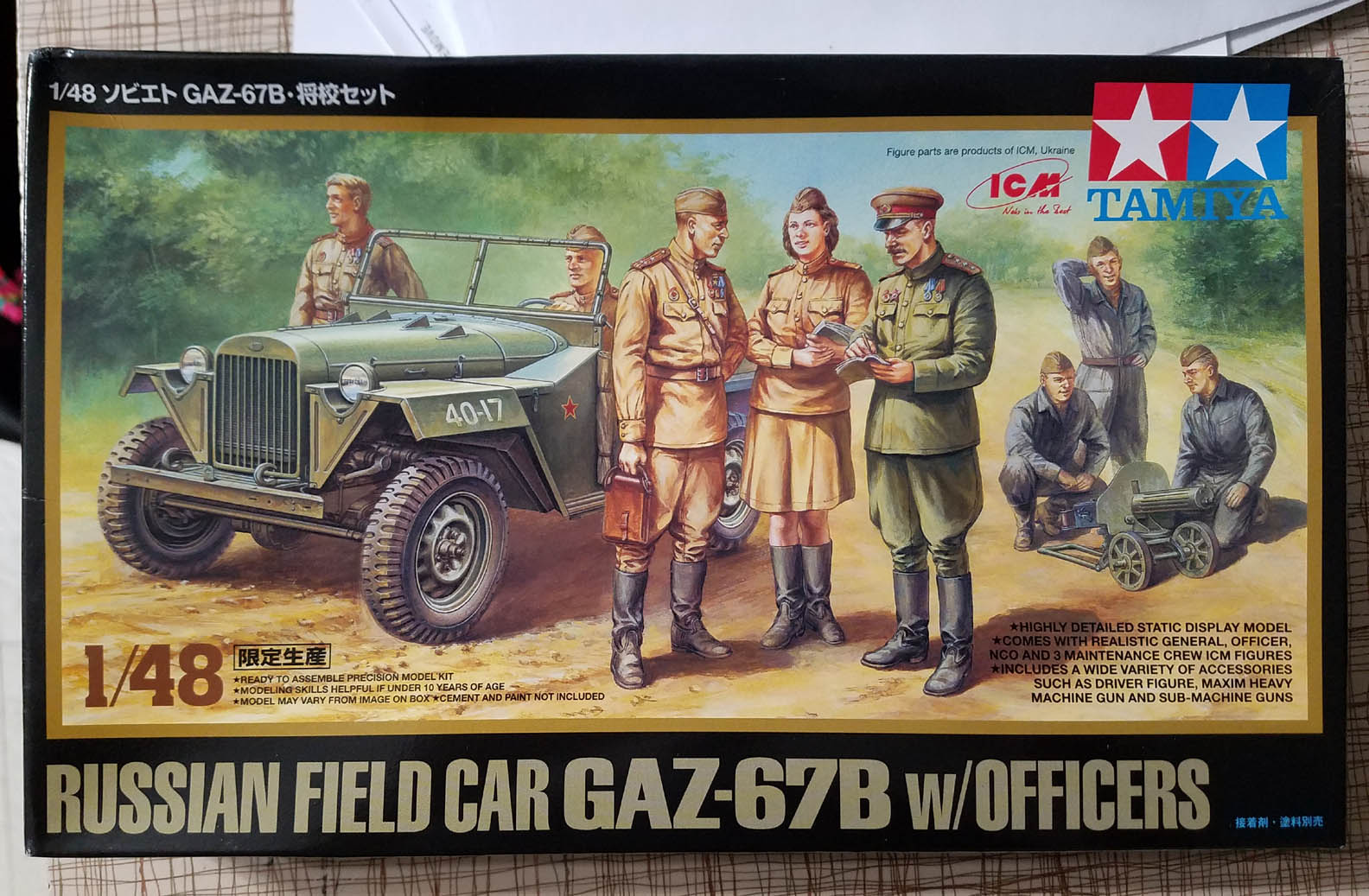