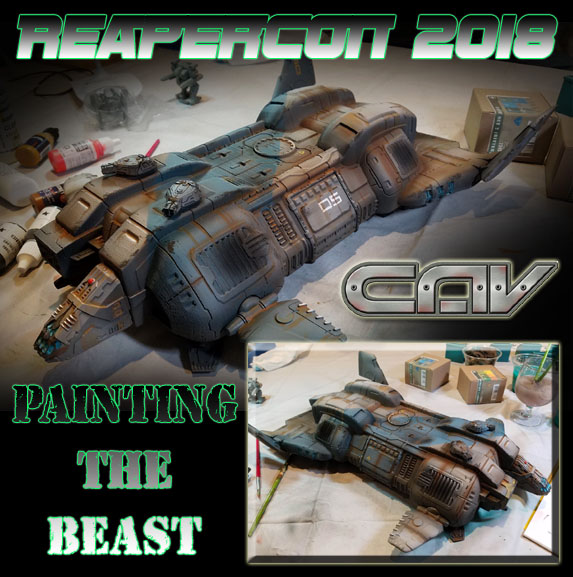 On Saturday morning of ReaperCon, I was handed a rather large piece that needed to be painted immediately for an upcoming CAV tournament. 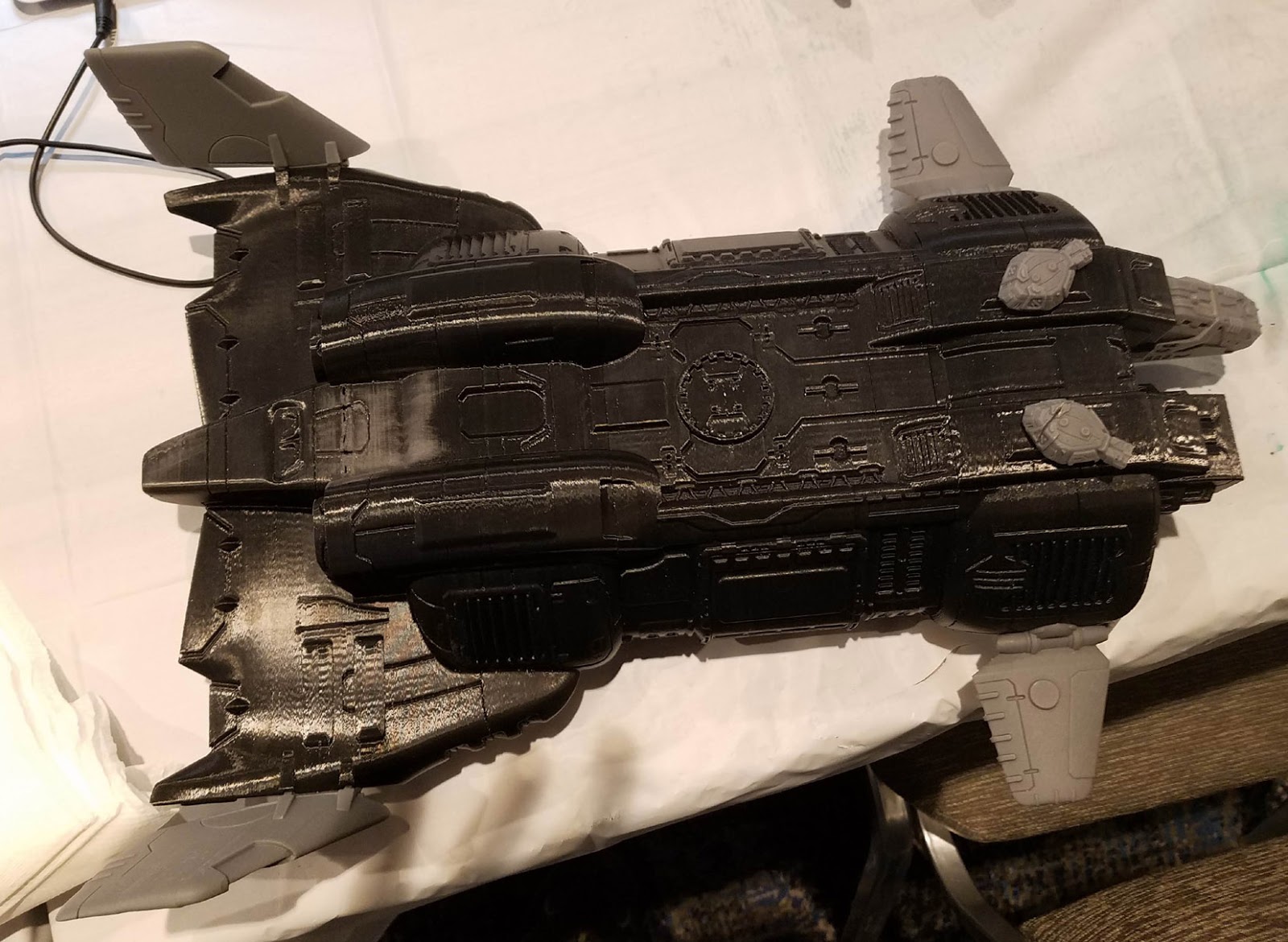 This was mostly 3D printed,  and it must have measured at least 15 to 16 inches long!! 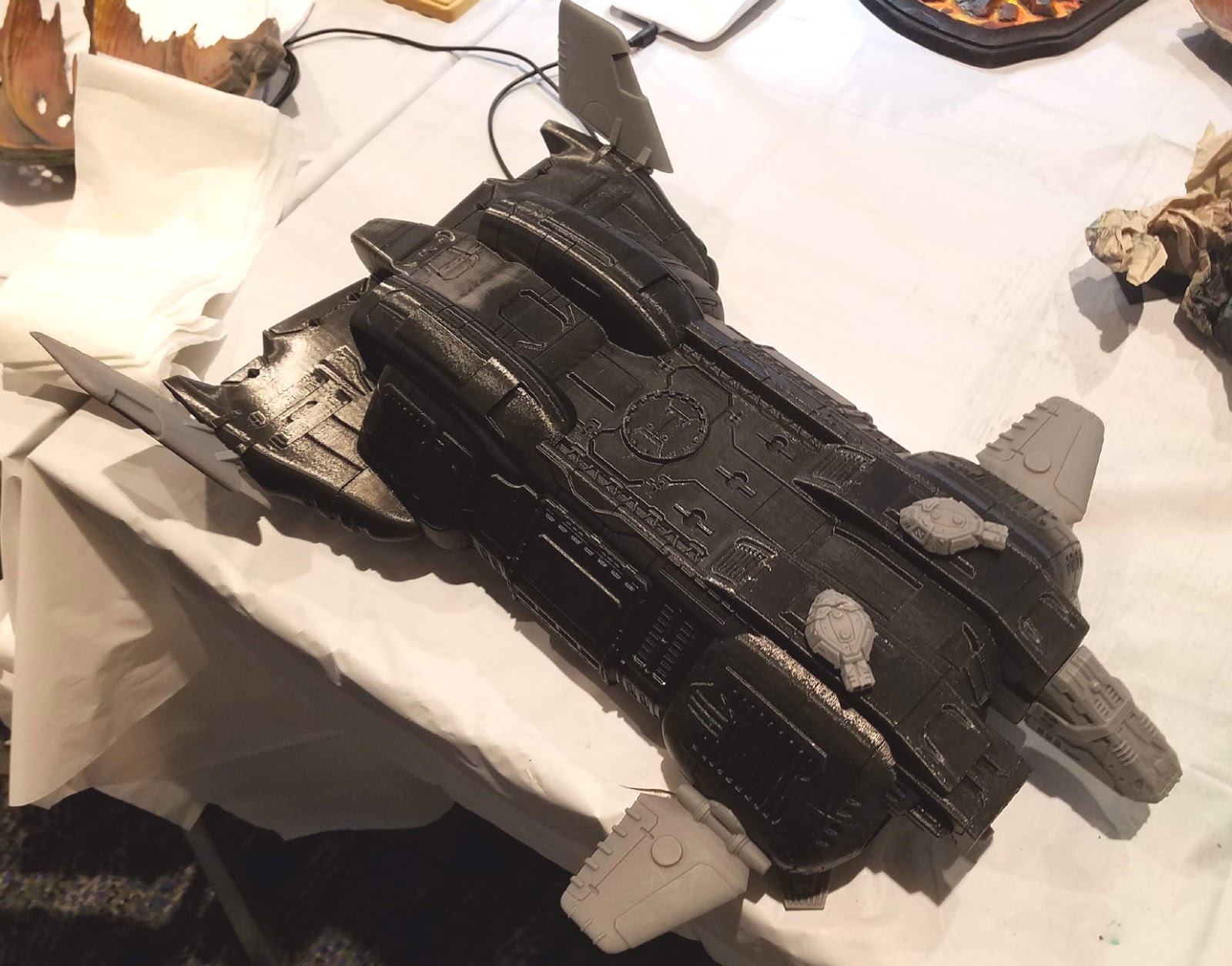 I had the Badger airbrush Sotar hooked up, and Stynlrez primers on hand, so I had to dive in right away.

Using the gray primer,  I covered the printed areas and the resin sections as much as possible.  I moved to a black and brown mix in the shadow areas. 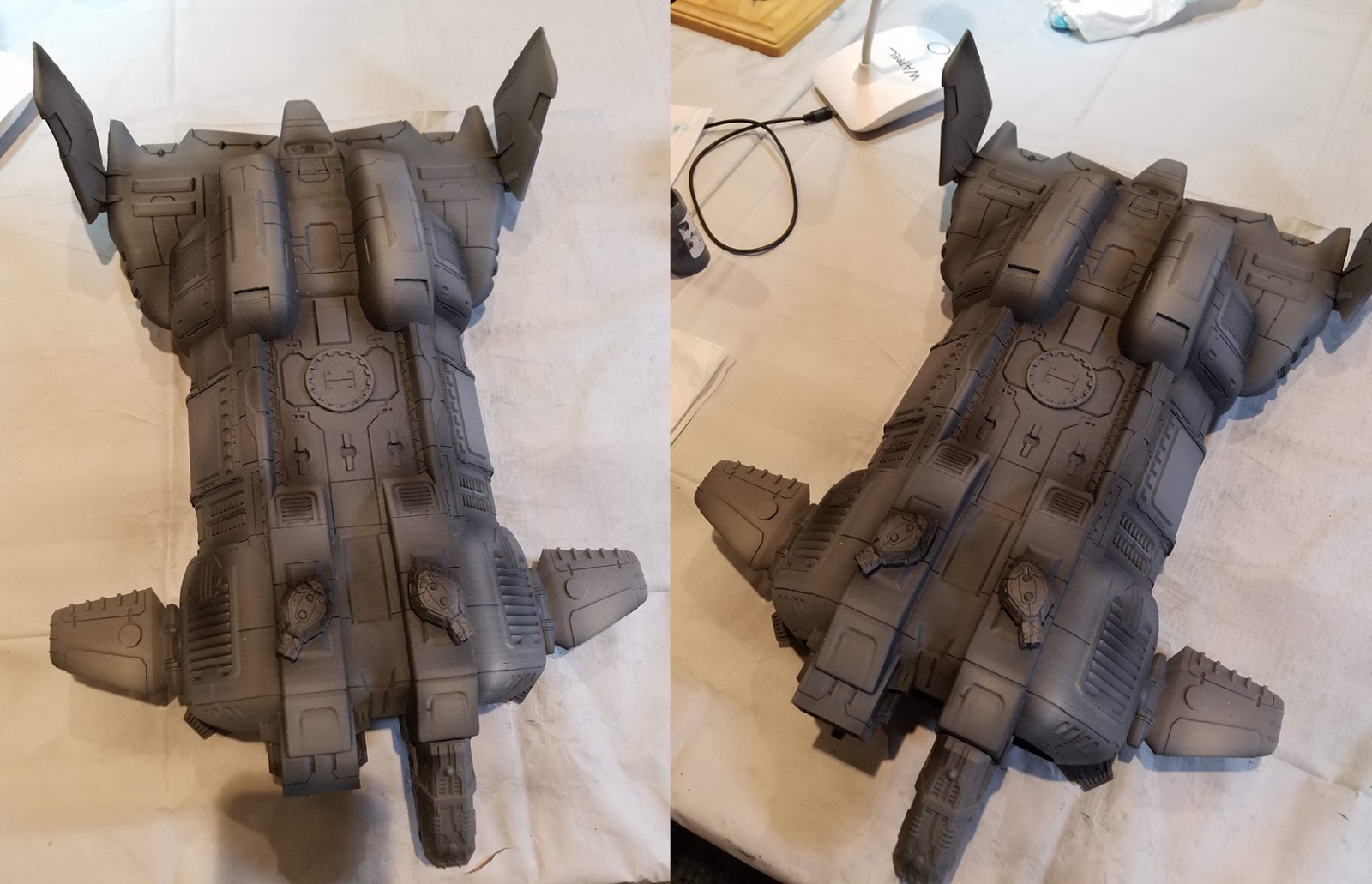 After setting up the darkest locations, I used the tan color to lighten the gray primer, and brought out some lighter areas.

Once that was completed,  I started to map out areas of weathering with the orange brown primer. 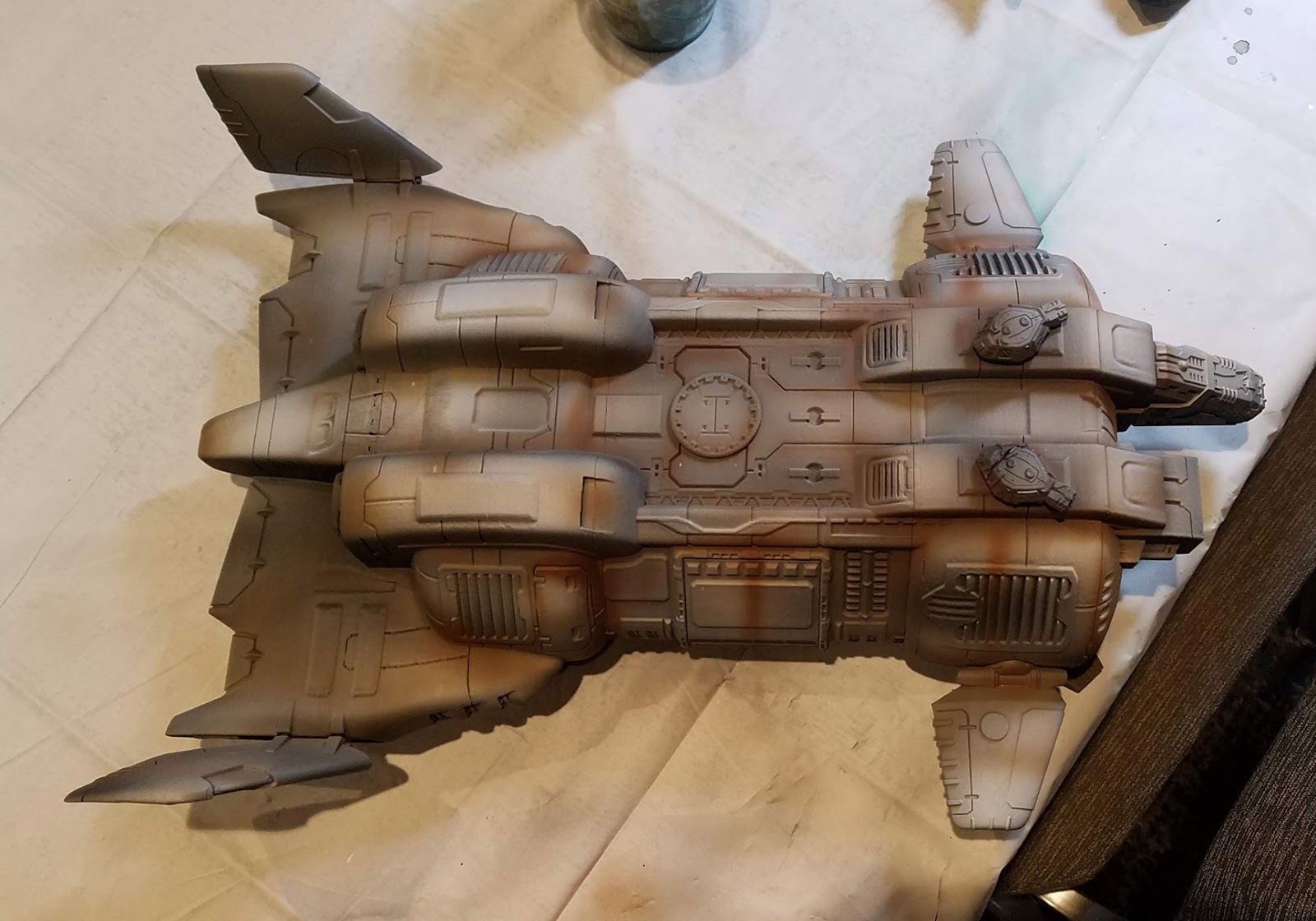 To deal with the striations in the large printed sections, I knew that I needed to have rust streaks in several places. 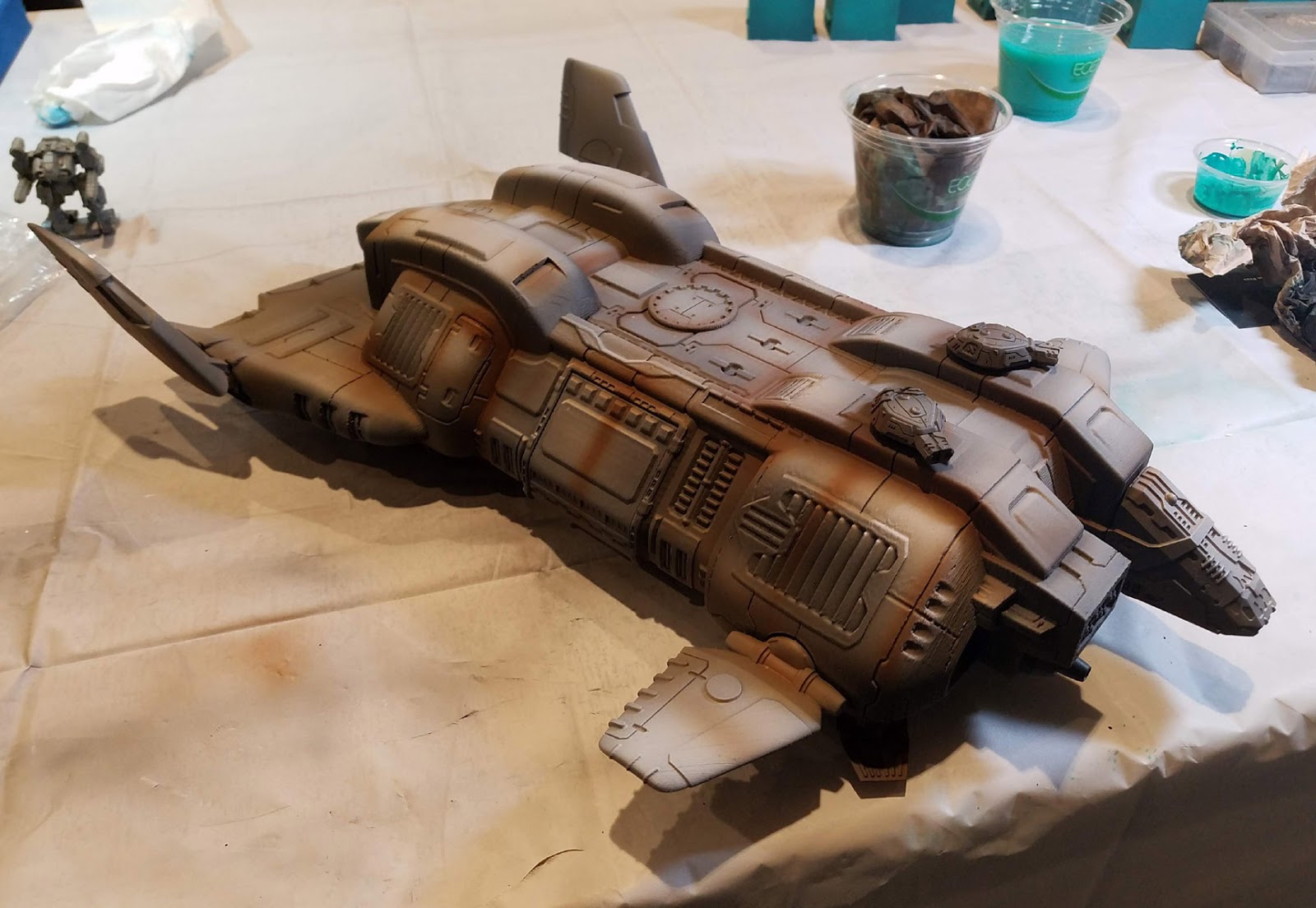 However,  it is very easy to go overboard with such things, especially when you're this rushed for time on something so massive! 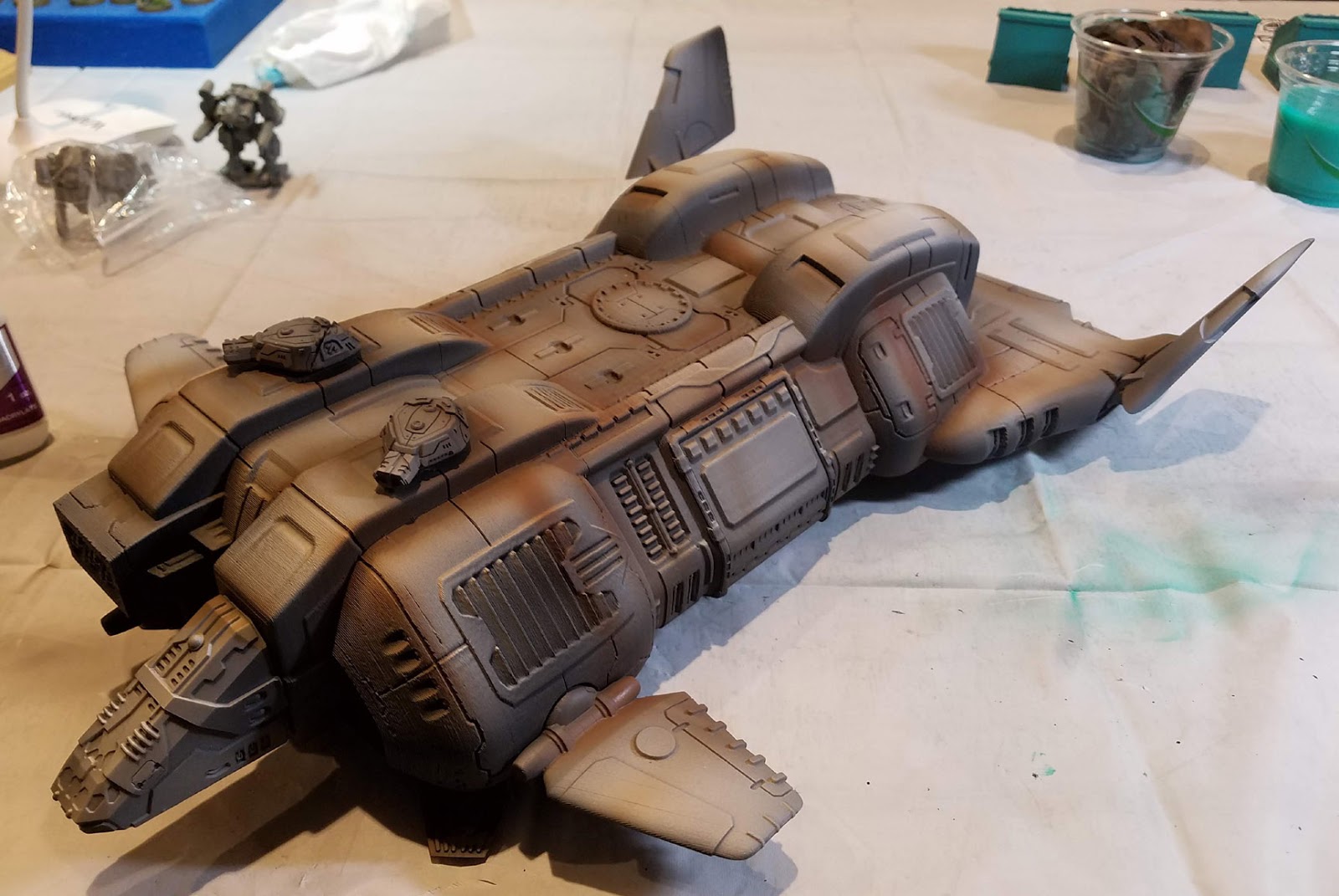 Since this was such a massive beast of a vehicle, I thought it would be more visually interesting if it had some larger marking or color beyond gray.

Since grayish blue is not an uncommon secondary color, I used a combination of blue tac and Parafilm to mask off a section.

I have a post that goes into more detail on the Parafilm here: 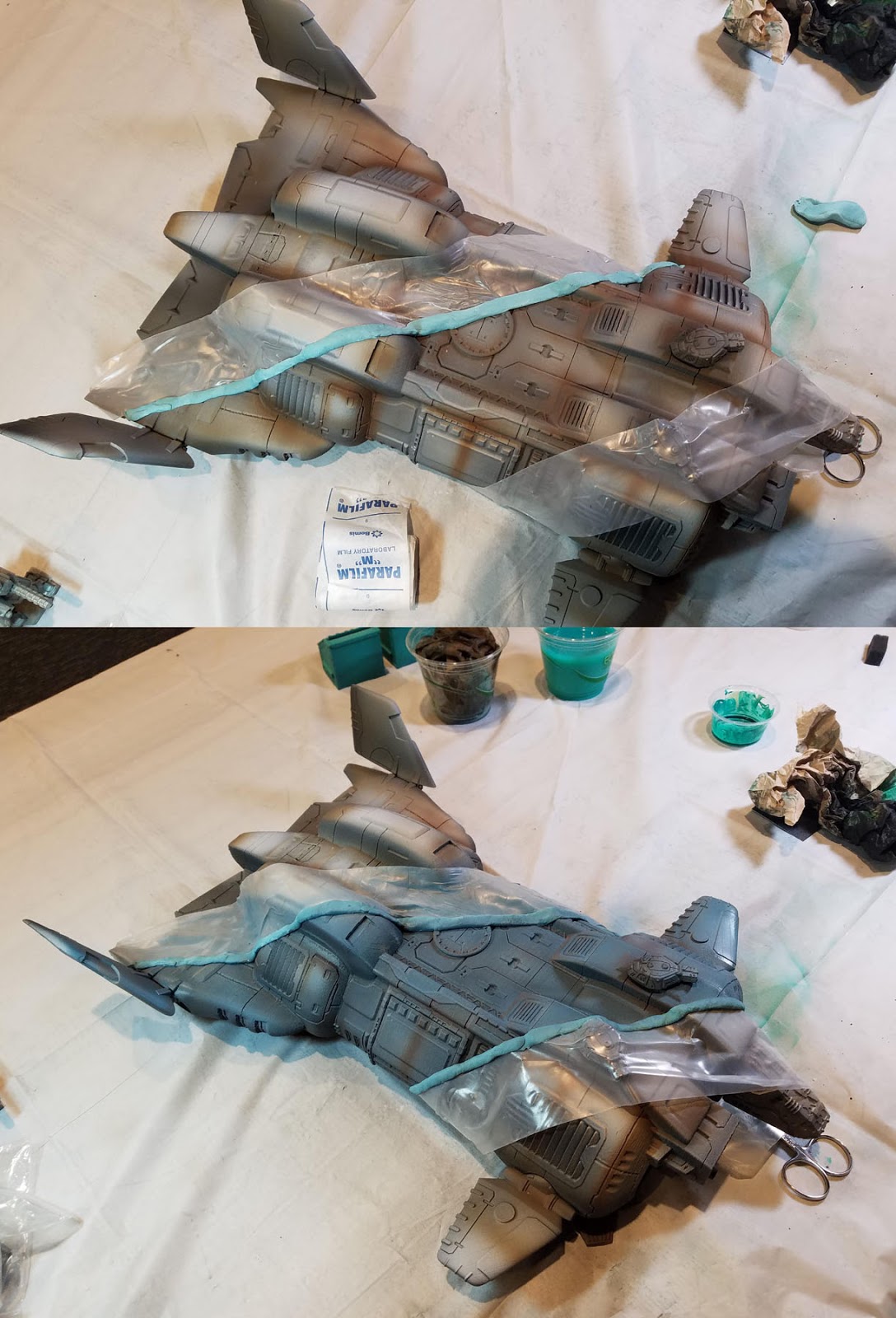 I mixed some of the slate blue primer with a dark blue Ghost Tint, and worked in the shado areas.  Over this, I sprayed a lighter series of mixes to create highlights in this blueish area. 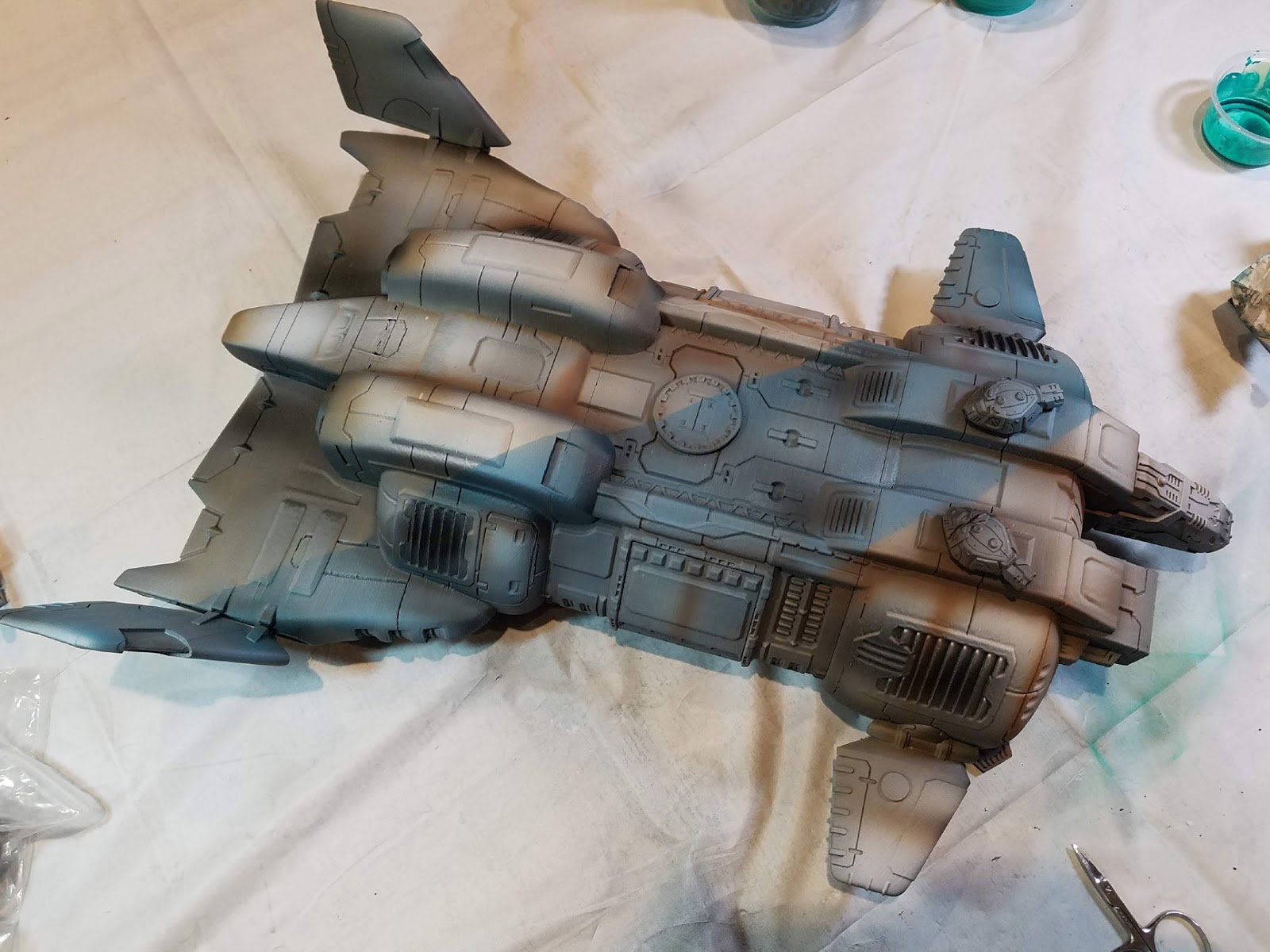 With time counting down to the event, I made a few small freehand designs which would look interesting from a distance but ones that could not be interfered with by the texture of the 3D printing. 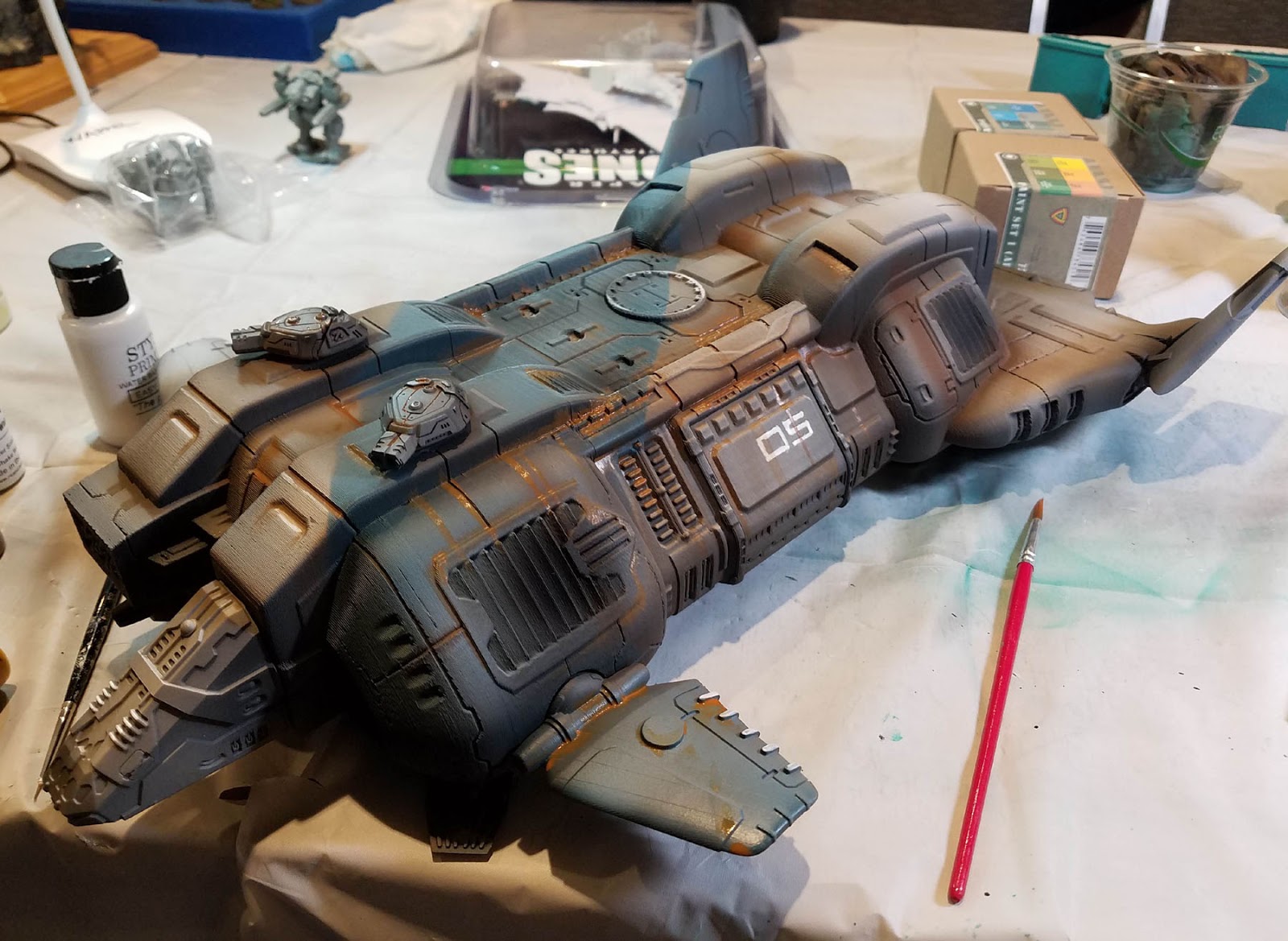 I continued to play with some highlights here and there, trying to bring out a few edges.

Since I didn't have any weathering powders with me, everything was done with the Secret weapon weathering paints. 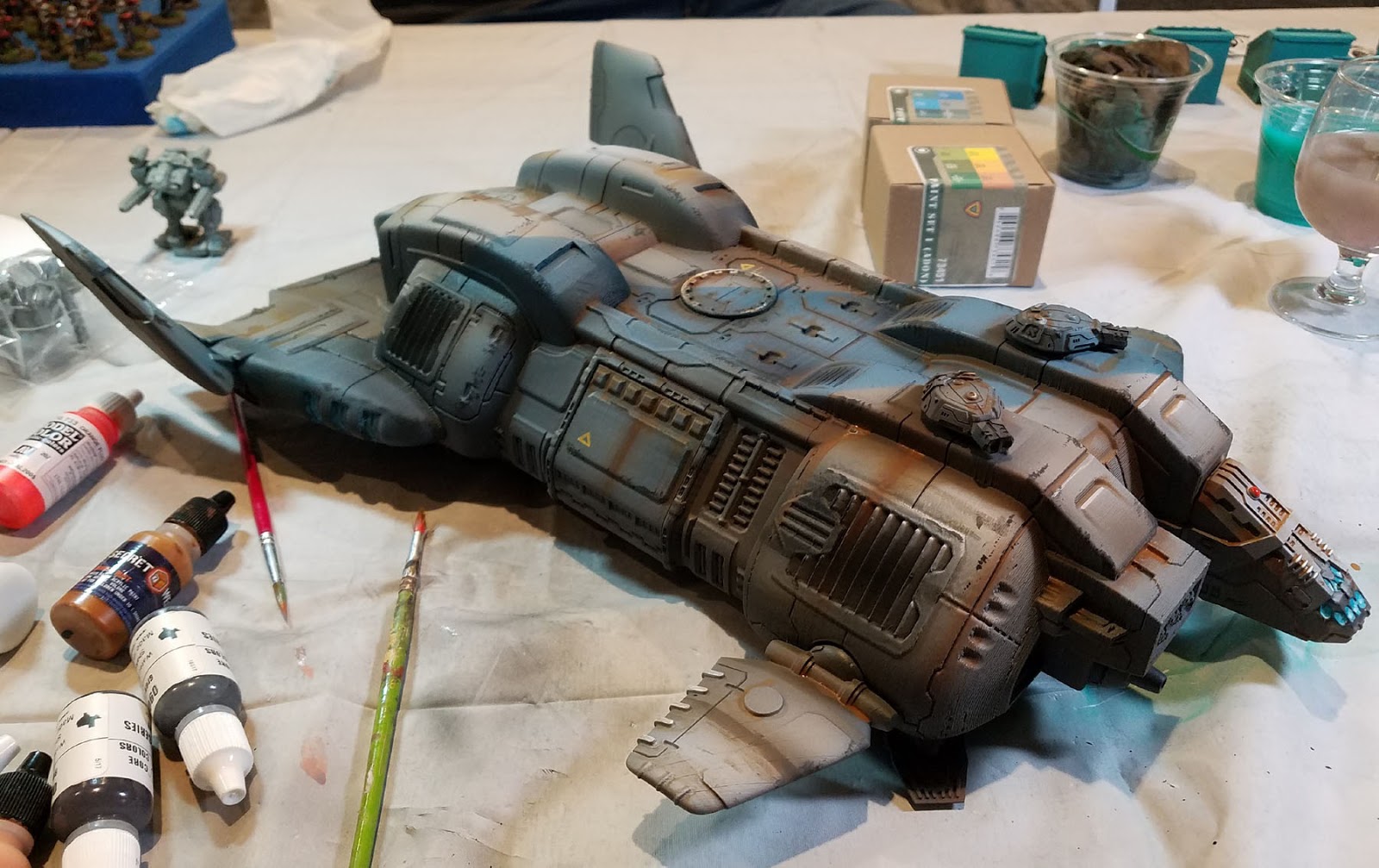 I chopped up one of the craft brushes to turn it into a chopping brush, applying some brown liner mixed with rust along the leading edge of the hull, wings and so on. 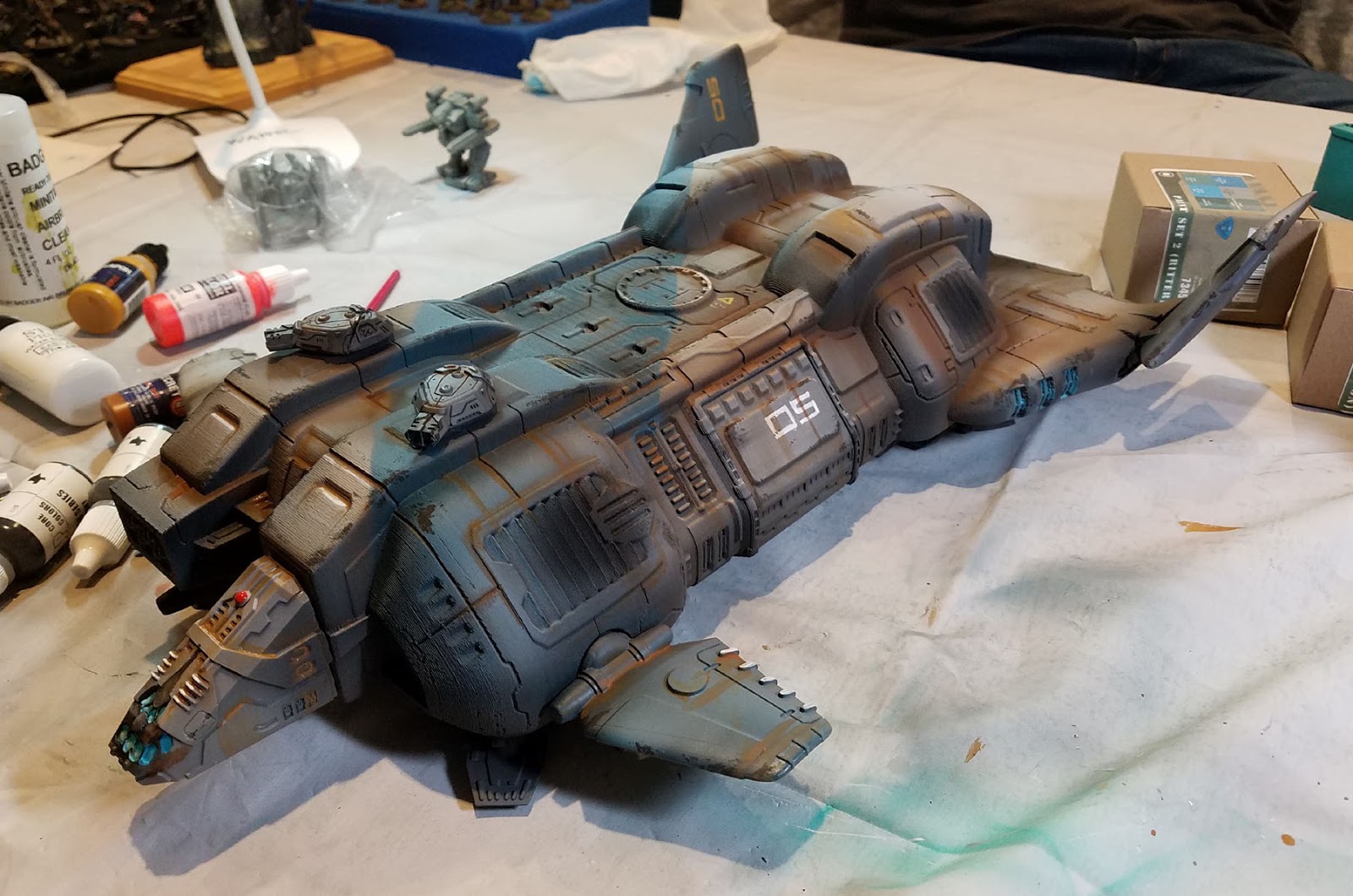 The extra color of the blue stripe helped to bring out the rust effects a little bit more, since there was additional contrast to the basic gray.

I also started to paint the tiny cockpit windows. 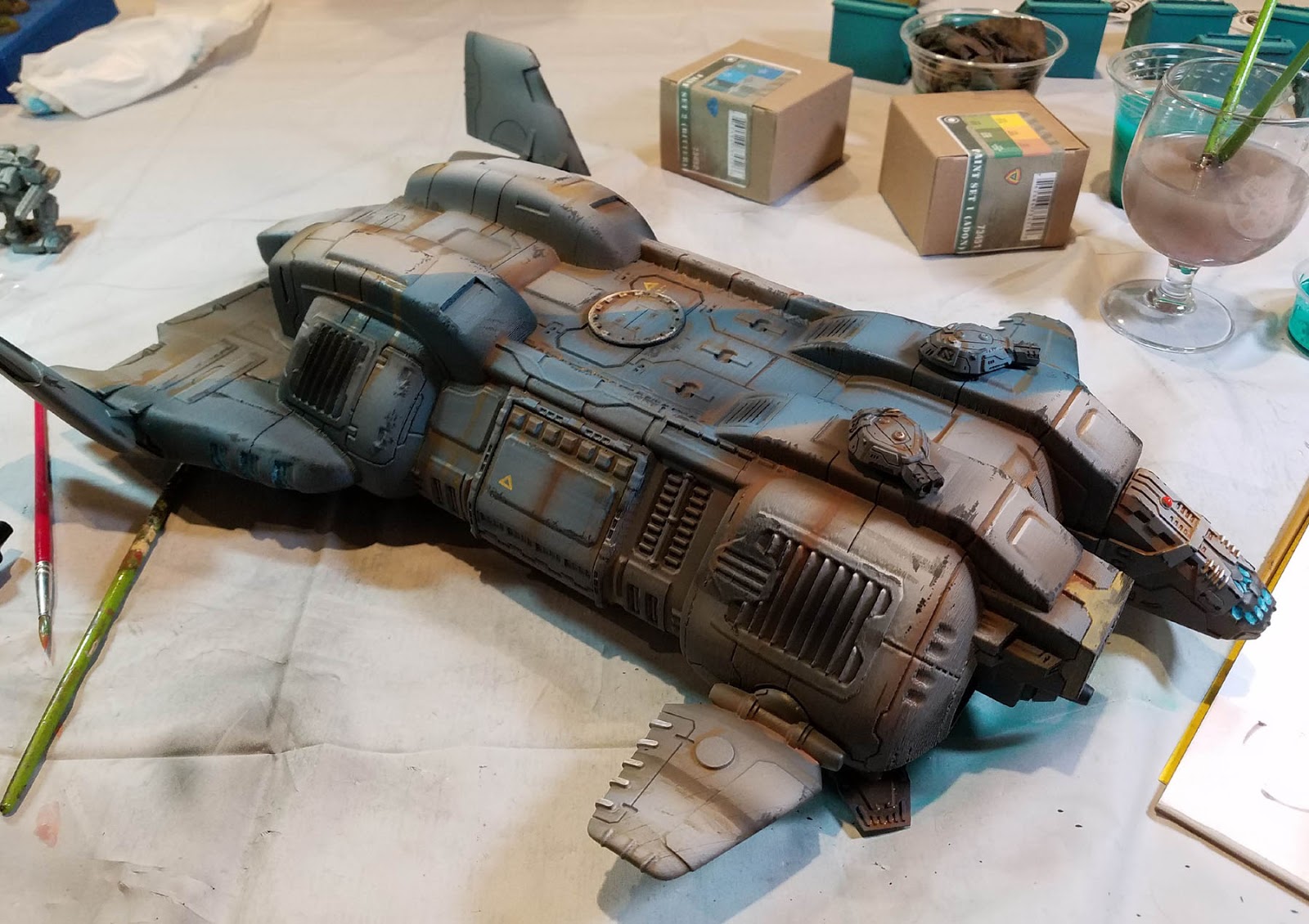 All too suddenly it was time to take this away to the tournament room where it was used as terrain/display! 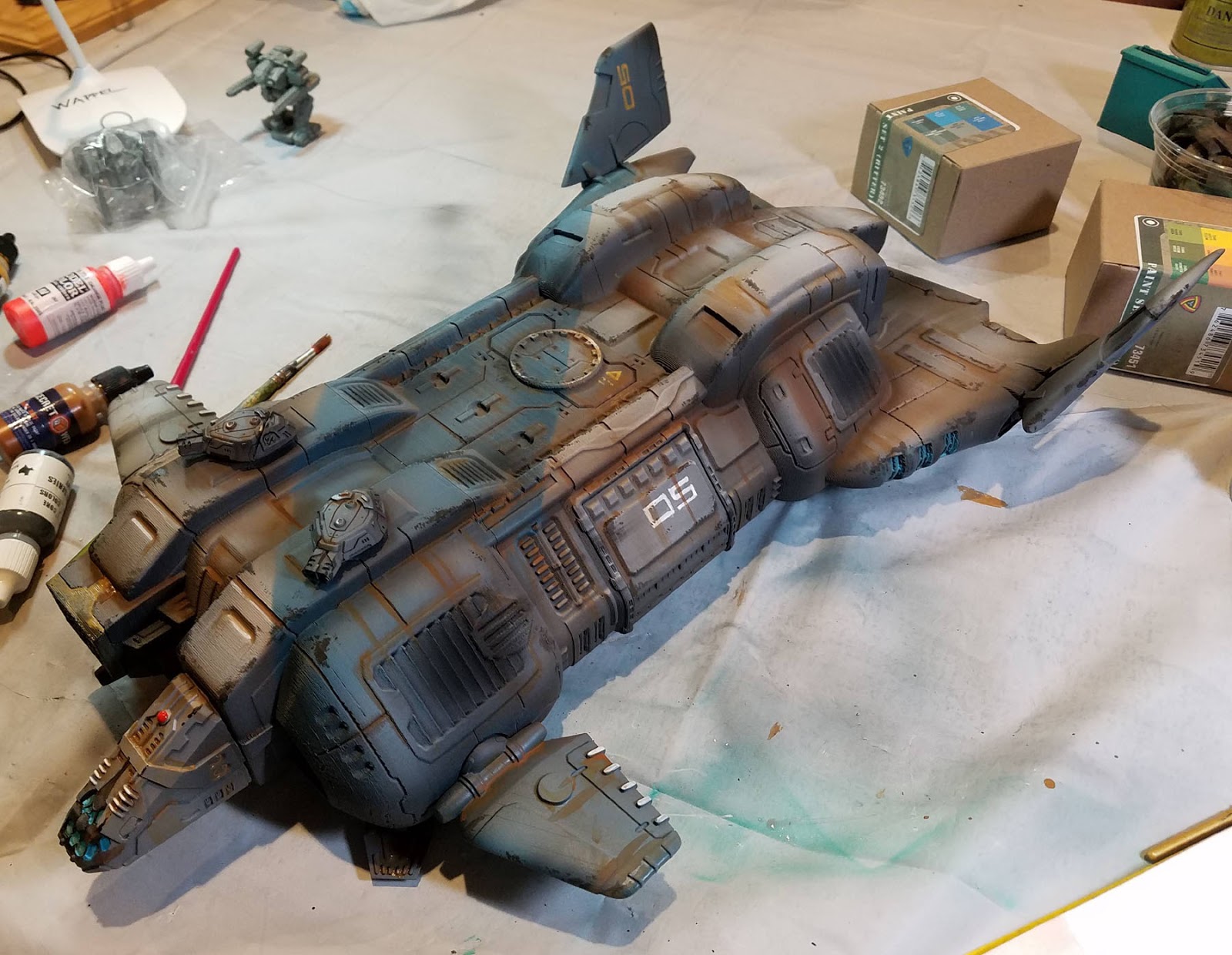 This might be the best way to see how big this was!! 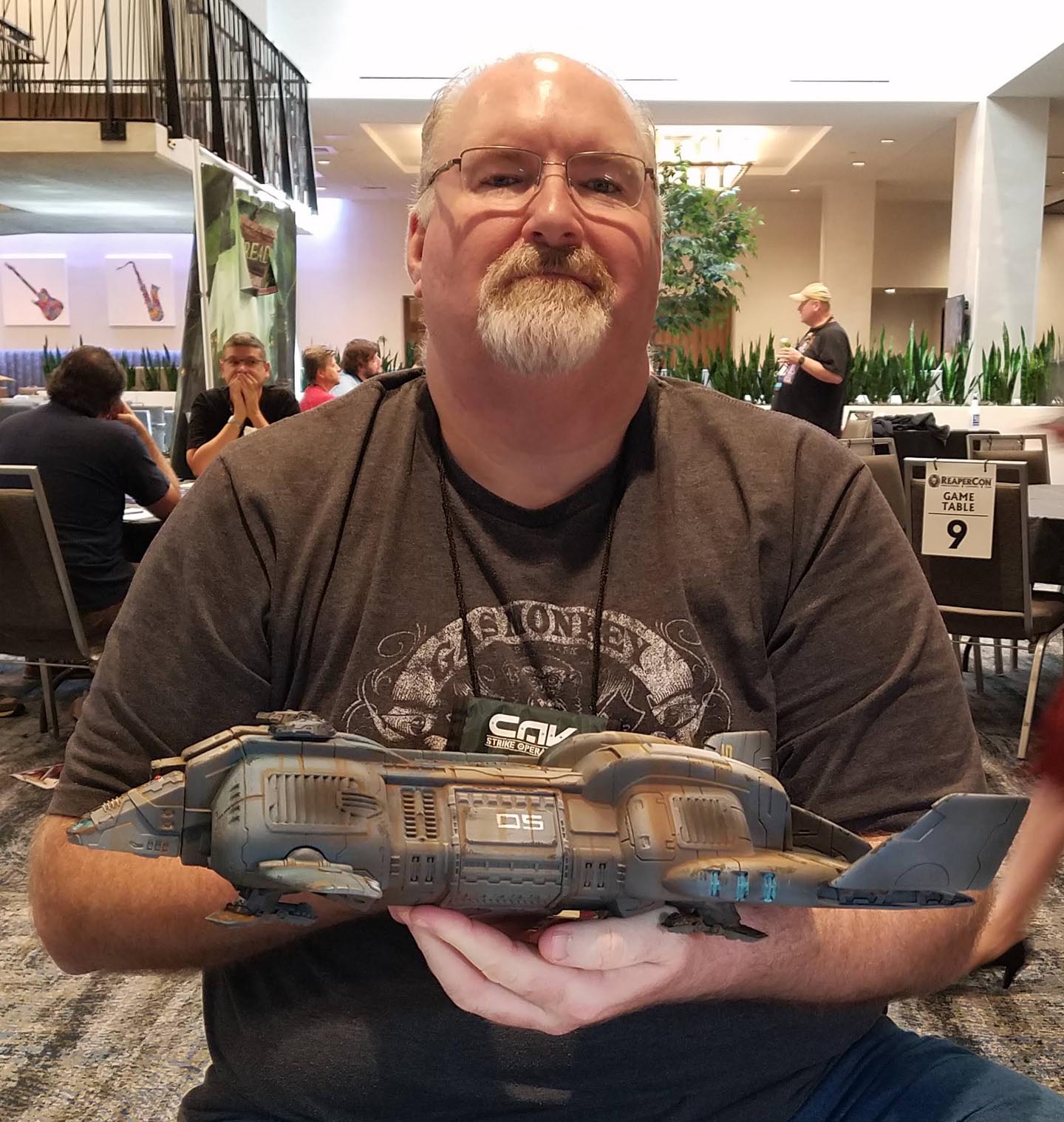