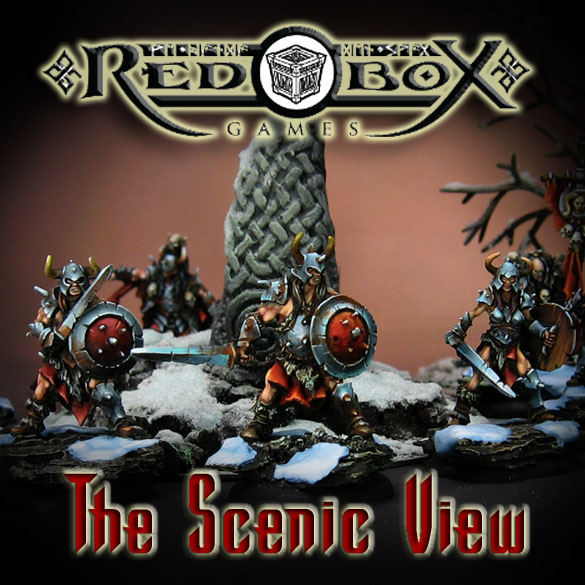 I don't get to do this very often, but when possible, I like to take group shots in terrain, especially terrain that puts them into context.

For example, these terrain pieces were made as part of a long running project. All of the figures that you have seen with the snow bases are a part of it, and these pieces were made to go along with them. 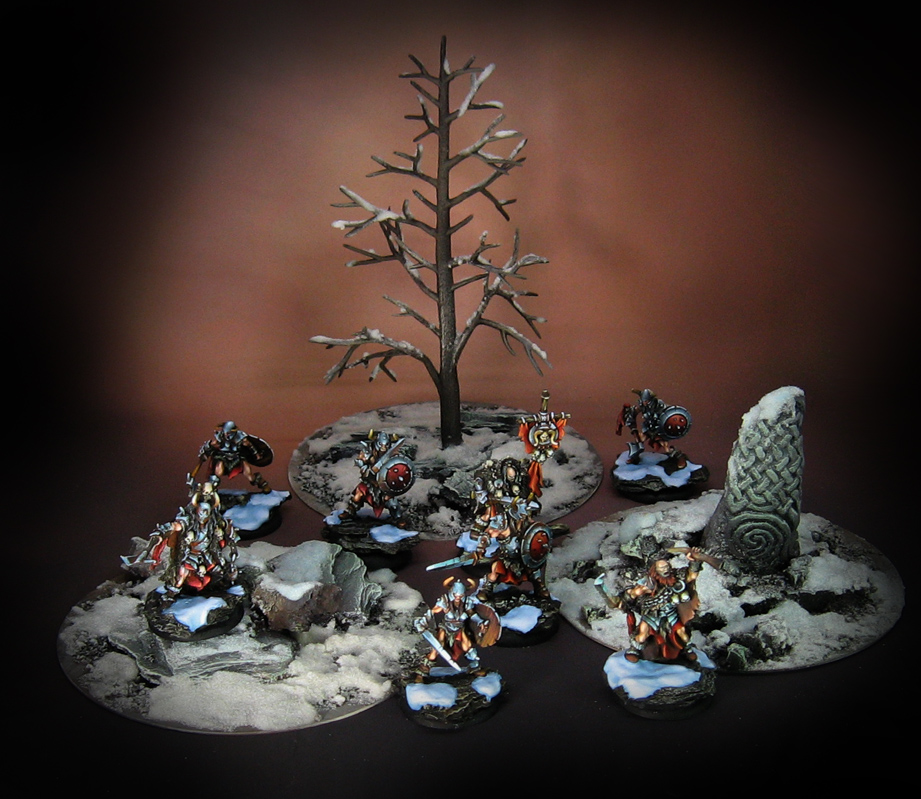 There are a number of articles on how they were created.  I will put in some links later in the post. 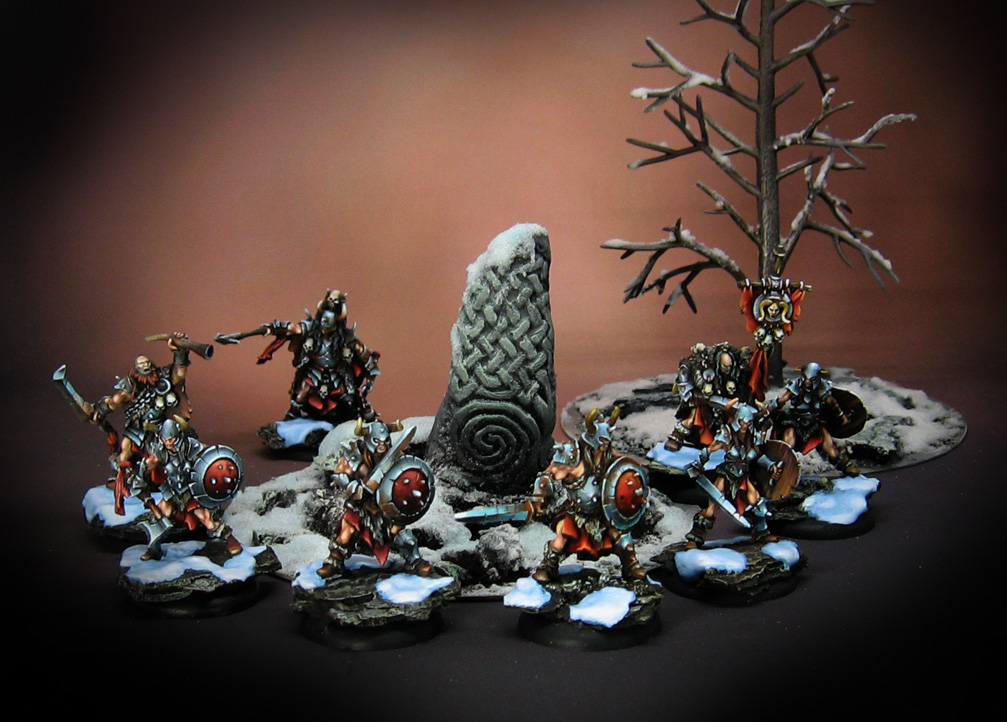 It is always a great joy to see the figures in this way... as they were originally intended to be seen.  The individual shots allow you to focus in on the details of each mini, but I always believe that the overall context of the army or project does not come through when figures are viewed in such isolation. 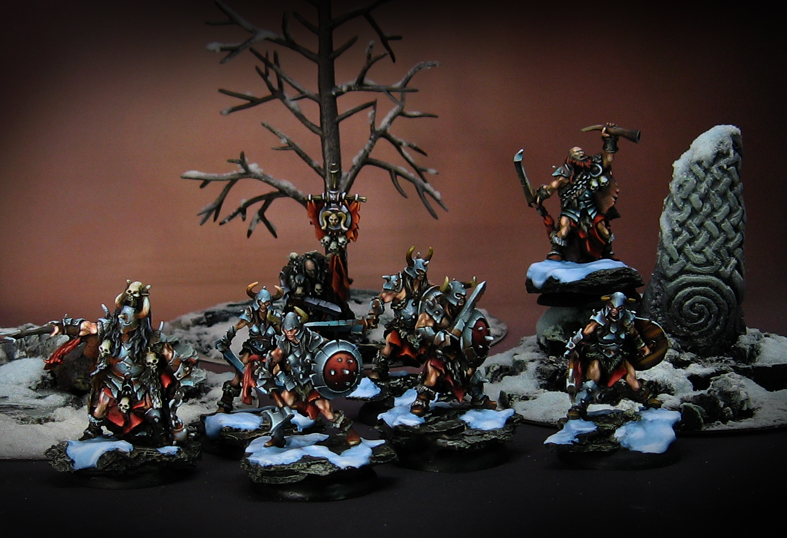 Often times there are certain extra things included on a figure that may not even make sense when seen as an individual, particularly when figures from a number of different companies are being combined into the same faction or army. 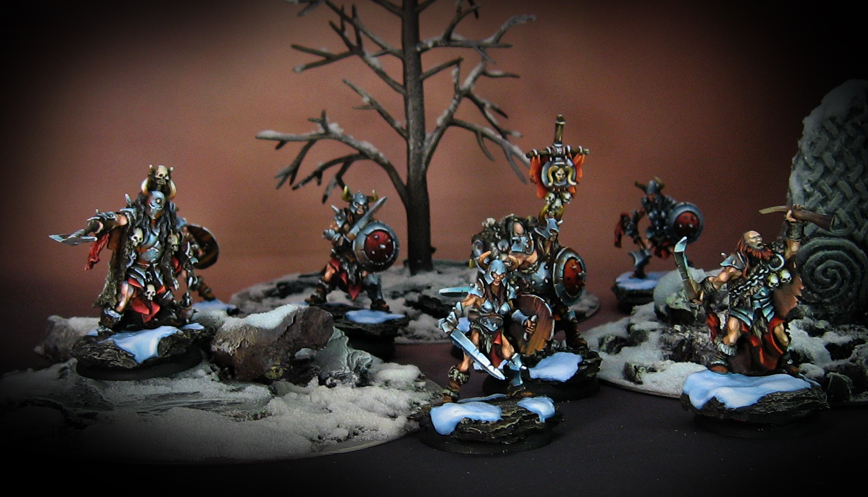 The previous set of group shots likely showed off the figures themselves more than this series, but I believe this set displays them "as intended" far better. 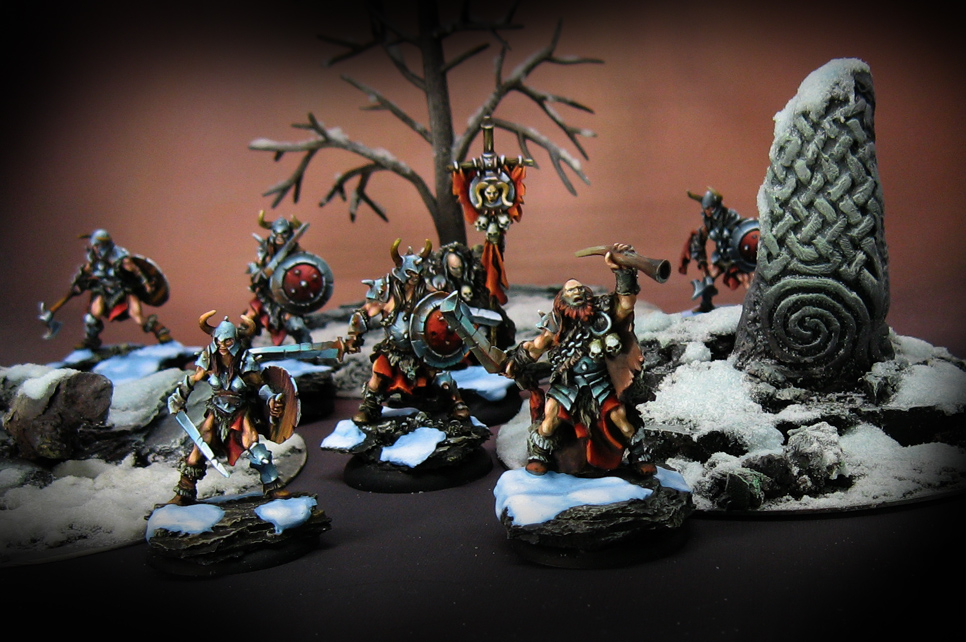 That is the difference that just a few small pieces of terrain in the image can make.  I suppose this first started to occur to me when I began working with all the Burn in Designs terrain for Wild West Exodus.  Yes, it was great to see all the figures in the standard posts, but I really loved the setting of the town.

Even if it was just a vignette form (a few buildings, part of the street, etc.), the effect was far more dramatic, and a story could be told. 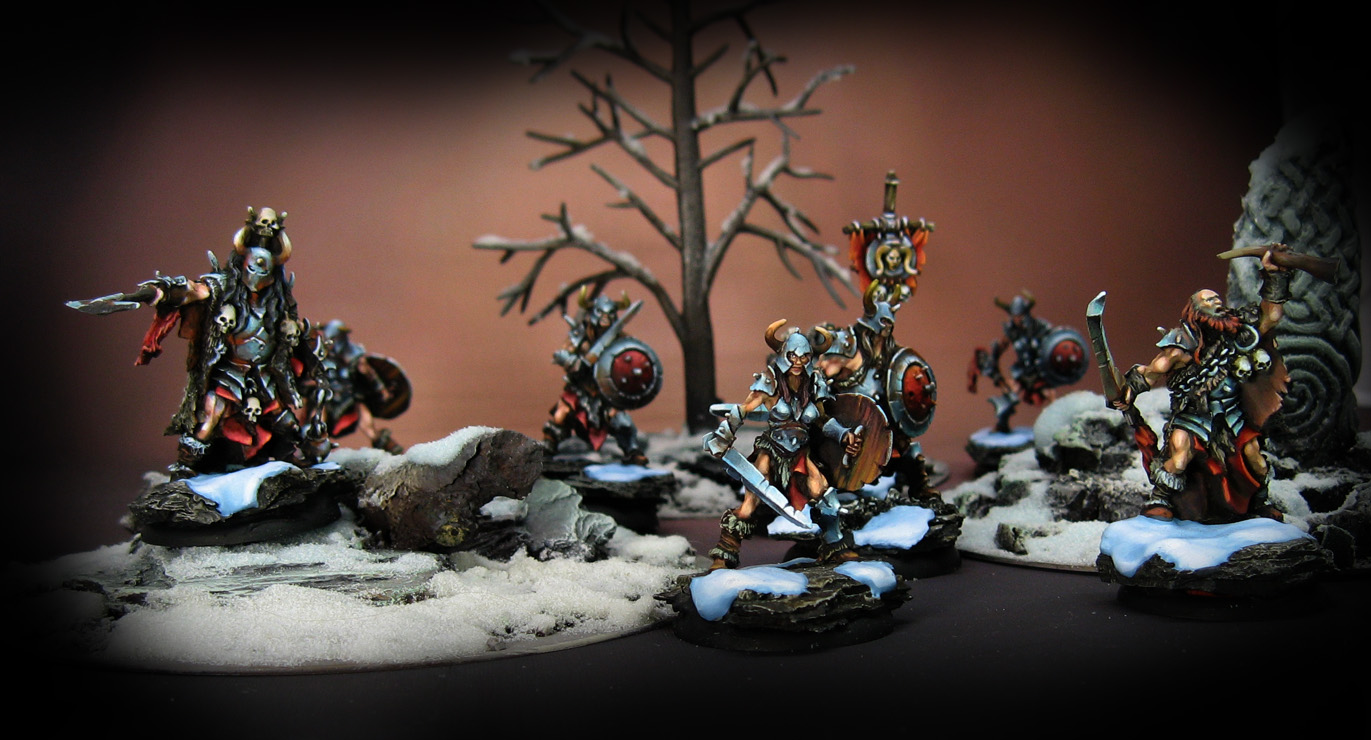 There was a series of 3 or 4 articles I believe on the terrain pieces... how they were made, painted and given the snow effect.  This one shows the painting process: 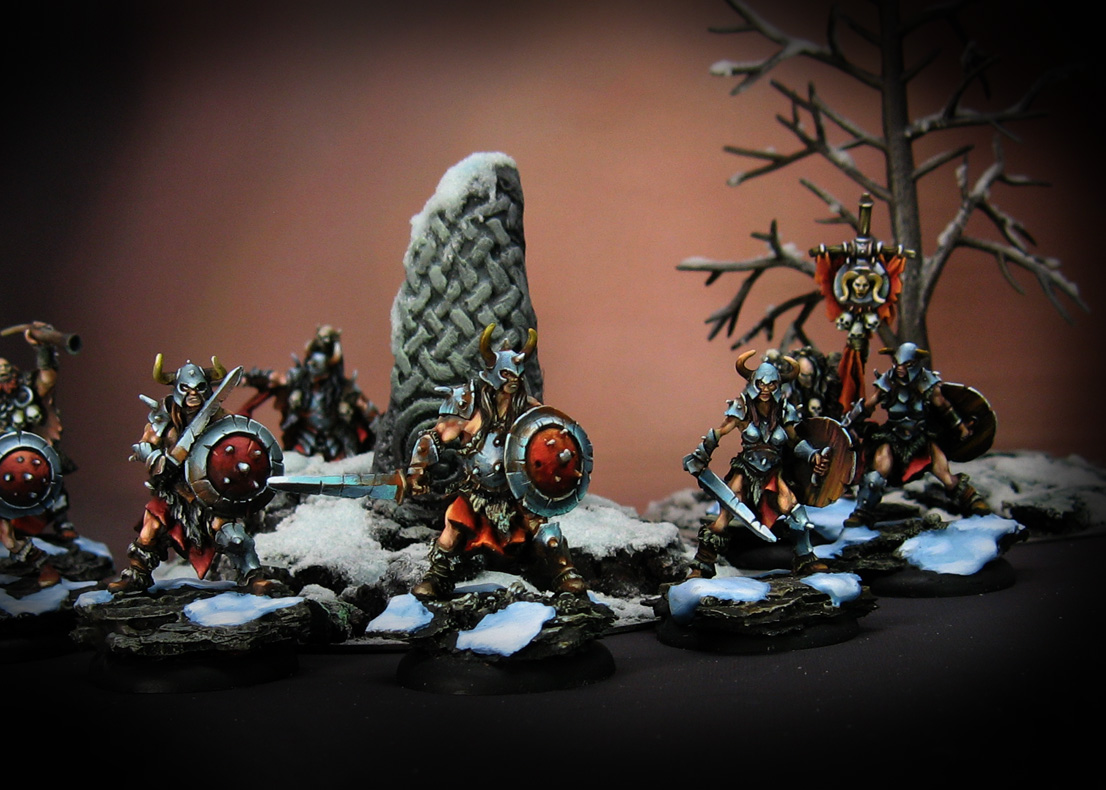 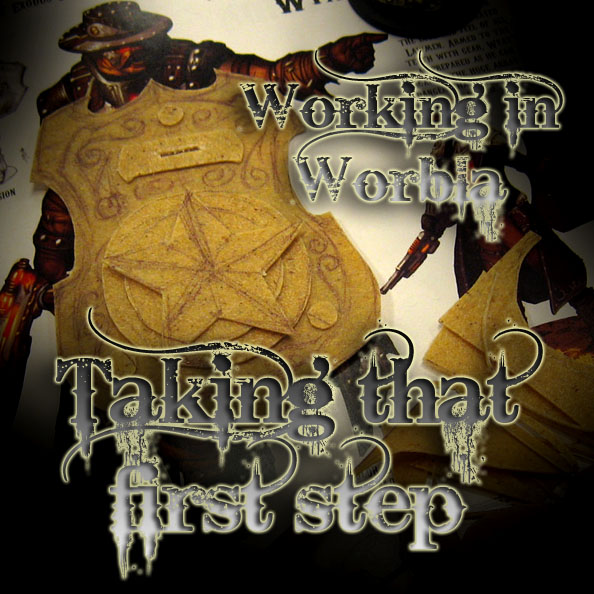 Some of you know that the first time I helped out at the WWX booth during GenCon, I tried to make a quick costume made from what was at hand.

Afterwards, I learned about an interesting material for making the kind of armor that you would see on the sort of steampunk western characters in the game.  Once I painted the legendary Wyatt Earp figure, I thought that might be a fantastic cosplay!

While I was at Marcon last weekend, I ended up being part of a judging panel on the masquerade.  After several hours on that panel, the next thing I knew I was invited to sit in on a panel which would discuss how to work with this material!  Excellent!

There are now multiple types of products which are similar to Worbla, but I will focus on that kind in this post.  Another note... this is the traditional regular variety. 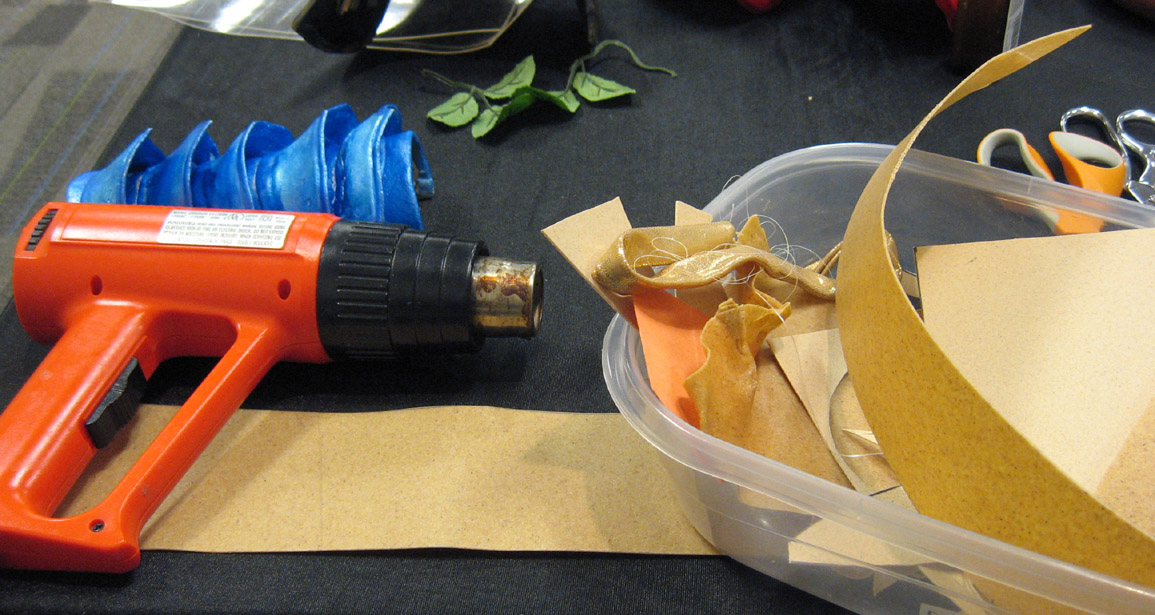 There are two distinct sides.  The smooth side is the adhesive end, while the rougher texture is the 'top'.  Keep in mind, all scraps can be saved and used again, no matter how small! 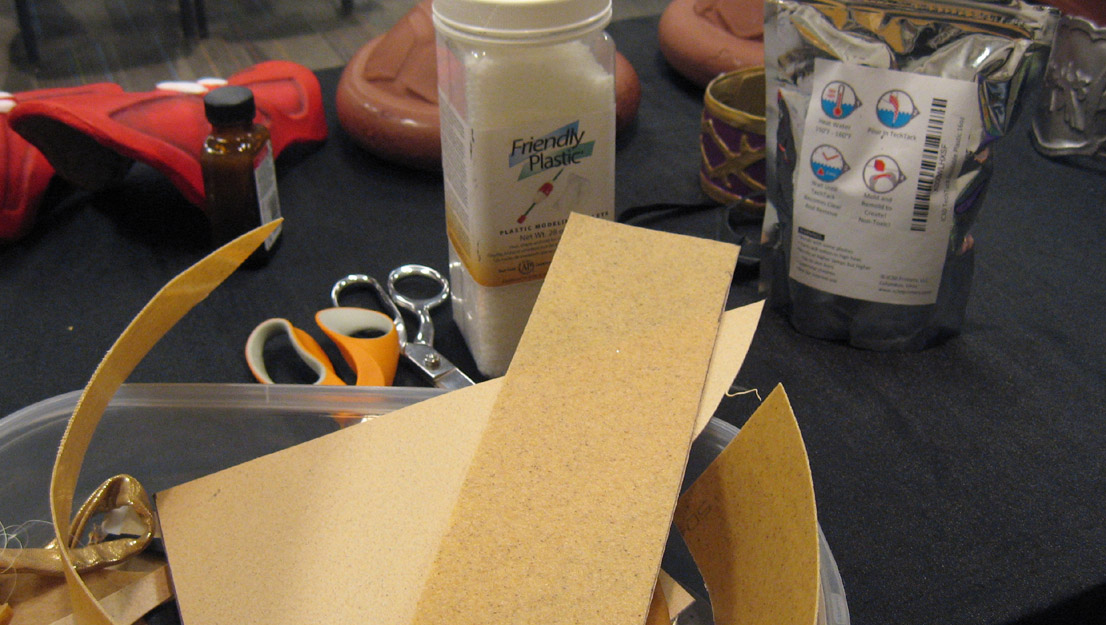 I can't recall what this was called, but it was a different kind of product.  It had less texture, but I think there was less adhesion as well. 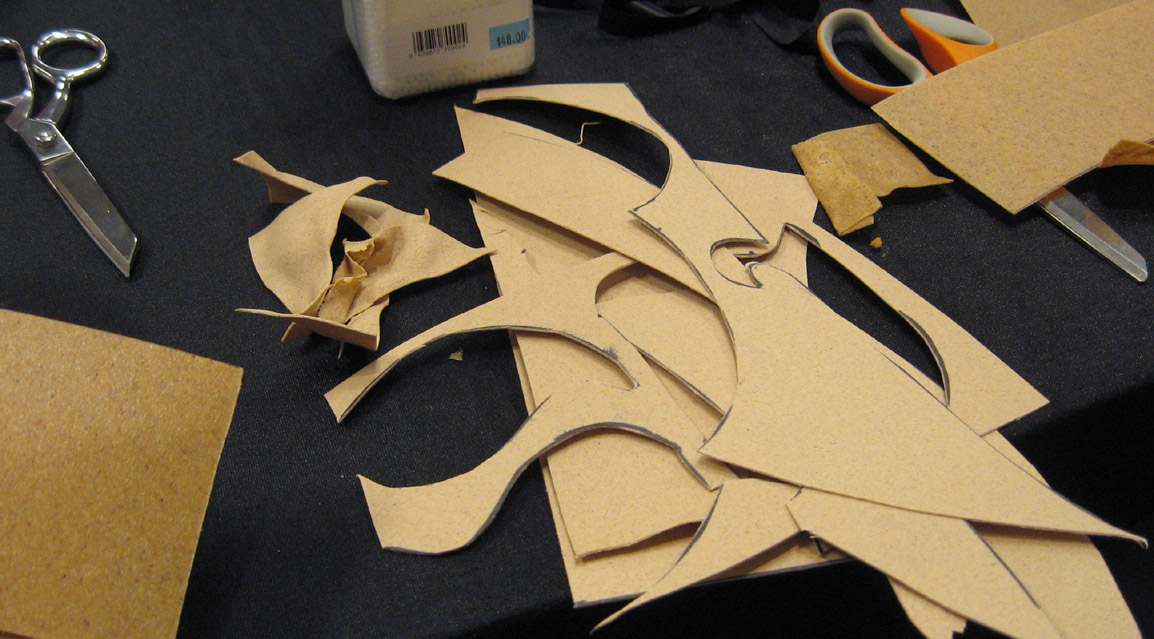 While the various kinds of Worbla were discussed, I started cutting out pieces so that we could test how the material heated up, and what effect that process would have. 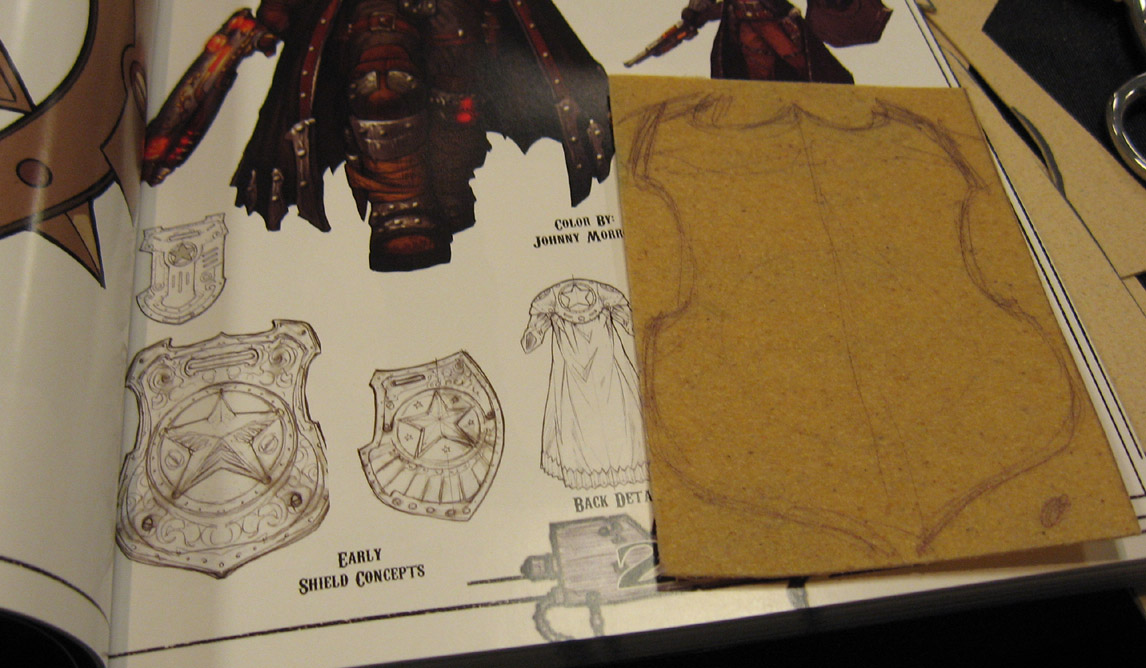 Layering in this manner creates additional texture, but I must keep in mind that all of these layers will be heated.  Since I have never done this before, I cannot be sure what kind of effect that it will have.  It's possible that I will just slag the whole thing :-) 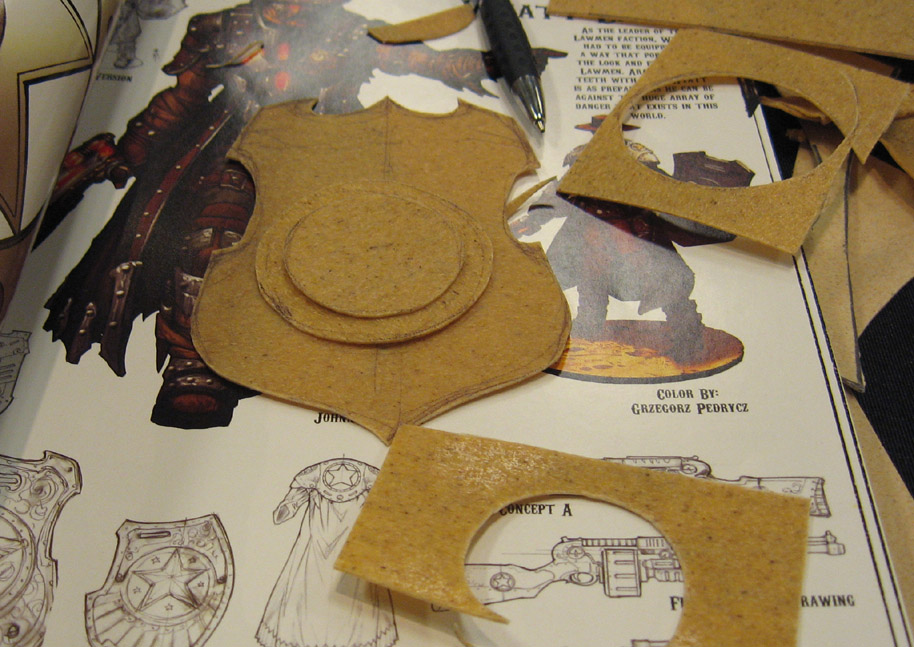 More layers are cut.  I will see if I can use the scrap materials to sculpt into some kind of border pieces on the edges of the badge. 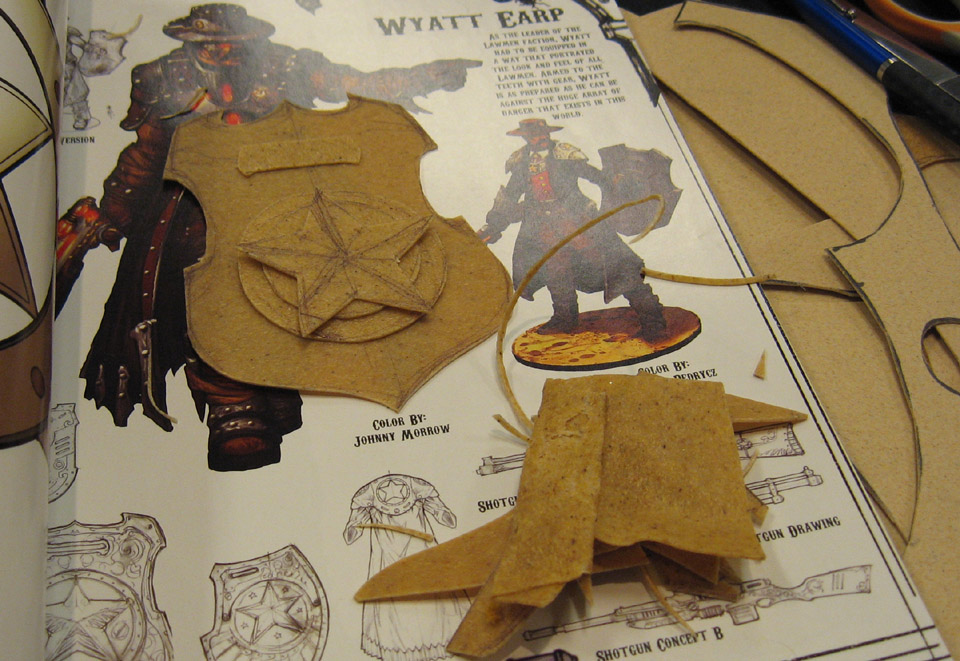 I wanted to try and make two kinds of screws... one set was cut from the sheets, while the smaller ones (and rivets as well) would be fashioned from the melted scraps. 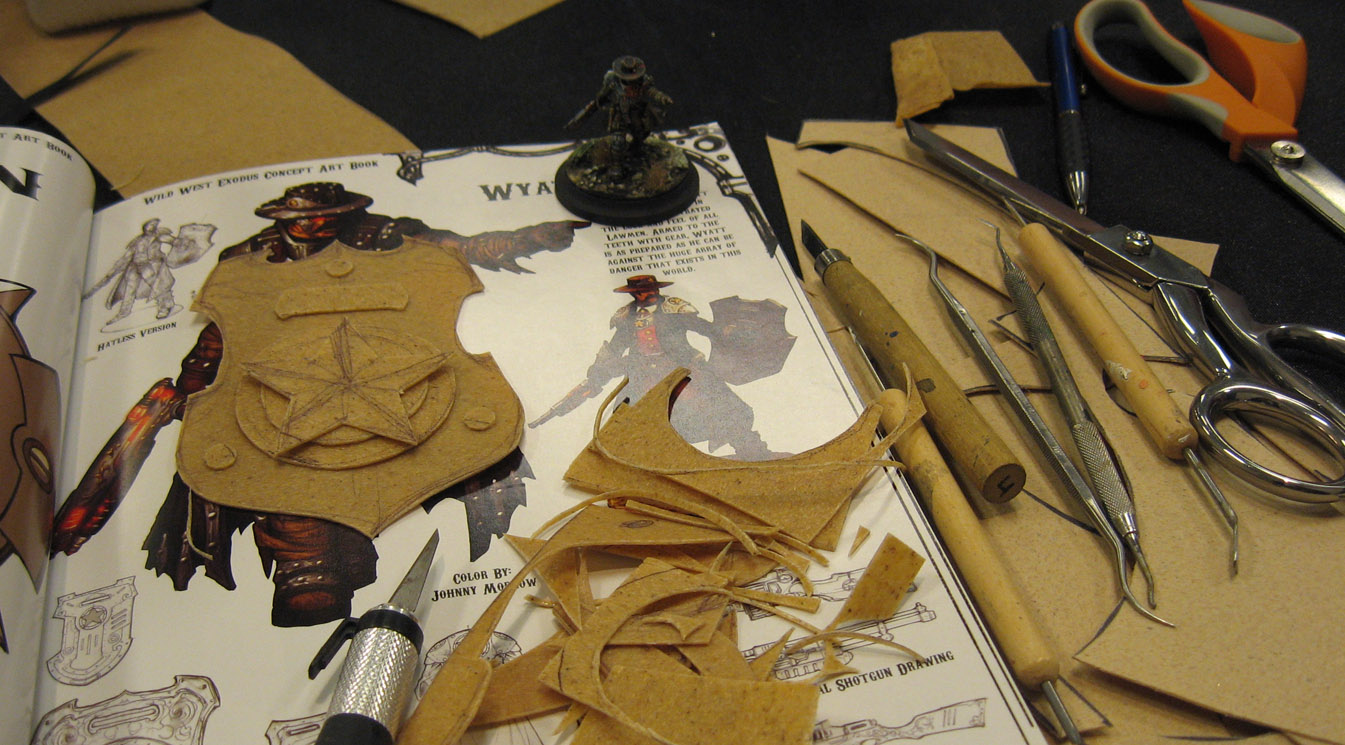 The final test would be to see if I could carve or sculpt the filigree texture on the lowest level of the badge!  I had no idea how rapidly or slowly the material would cool, making such sculpting more difficult. 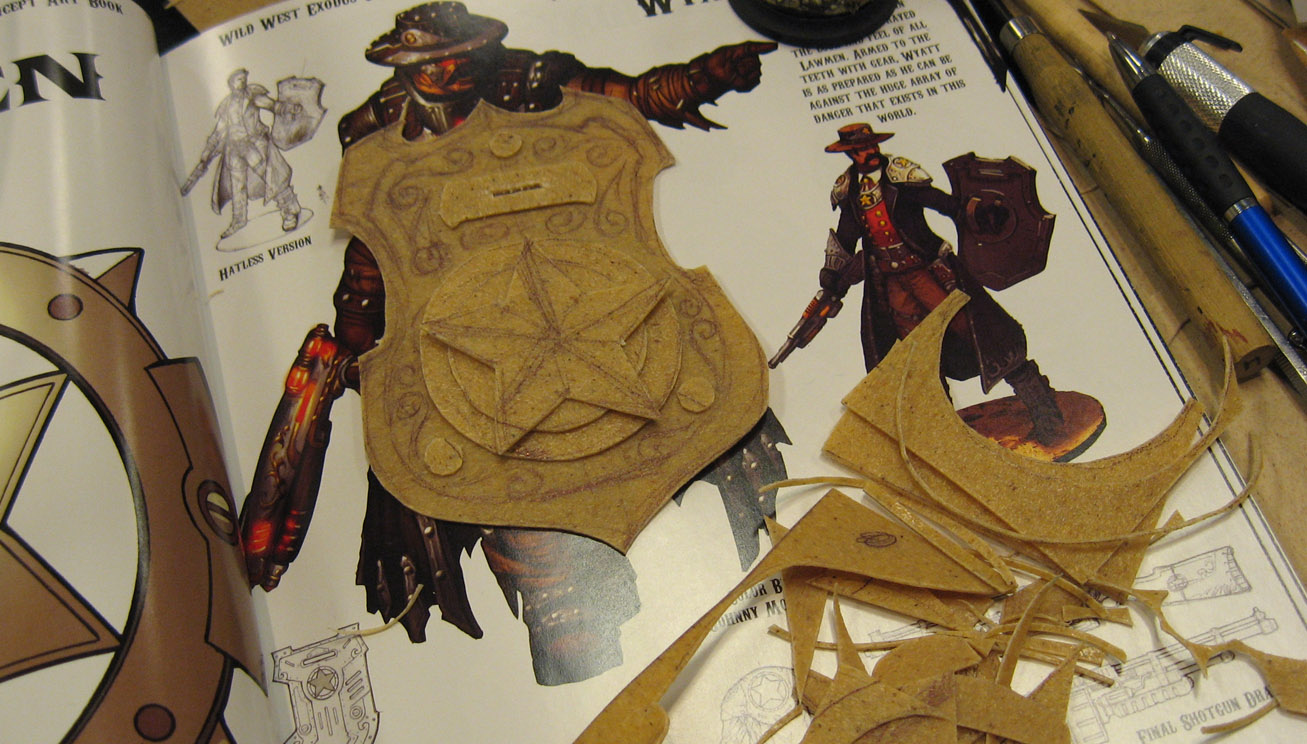 With only minute left in the panel, I turned on the heat gun and started melting!

It only takes a small amount of heating to get things pliable, so less is always more.  I set all my pieces aside, and worked my way up, heating each layer slightly so that it would stick... and not blow away!

We found that a decent heating gave me 3-4 minutes of working time to sculpt the patterns on the shield, and straighten out some other edges.

I was pleased that repeated heatings did not ruin the previous layers, turning them into that dreaded slag!  Very nice.

Many thanks to Mogchelle Cosplay for providing the materials and the know how!  I definitely have a much more solid foundation on which to build.  Much experimentation will still be required, but I am nowhere near as blind as I was when I first started. 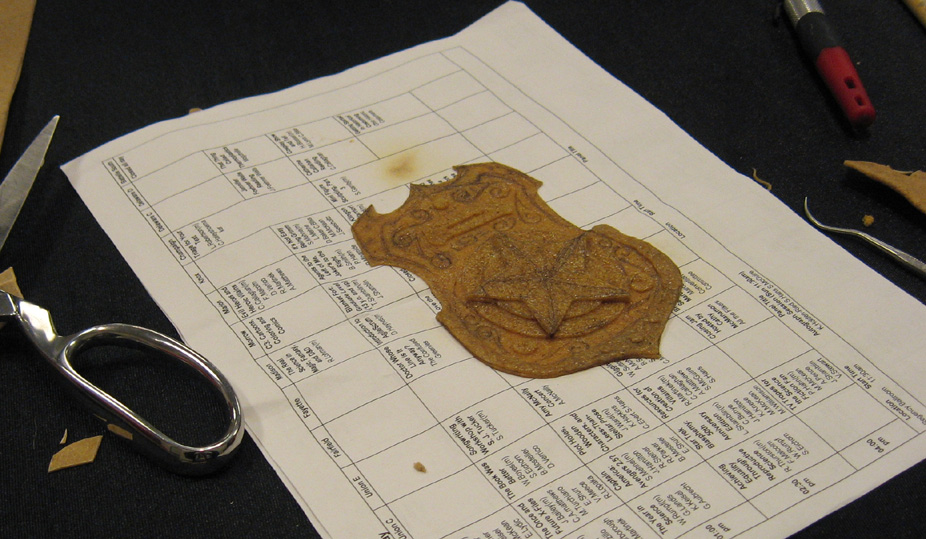 And finally, the convention came to an end.  At after party, long after most folks had gone home, I was able to secure a few cookies for the intrepid travellers who had journeyed with us.  Babo loves all cookies, but ones with faces are even better!

Many thanks to Jack and everyone else who worked so hard for us at Marcon! 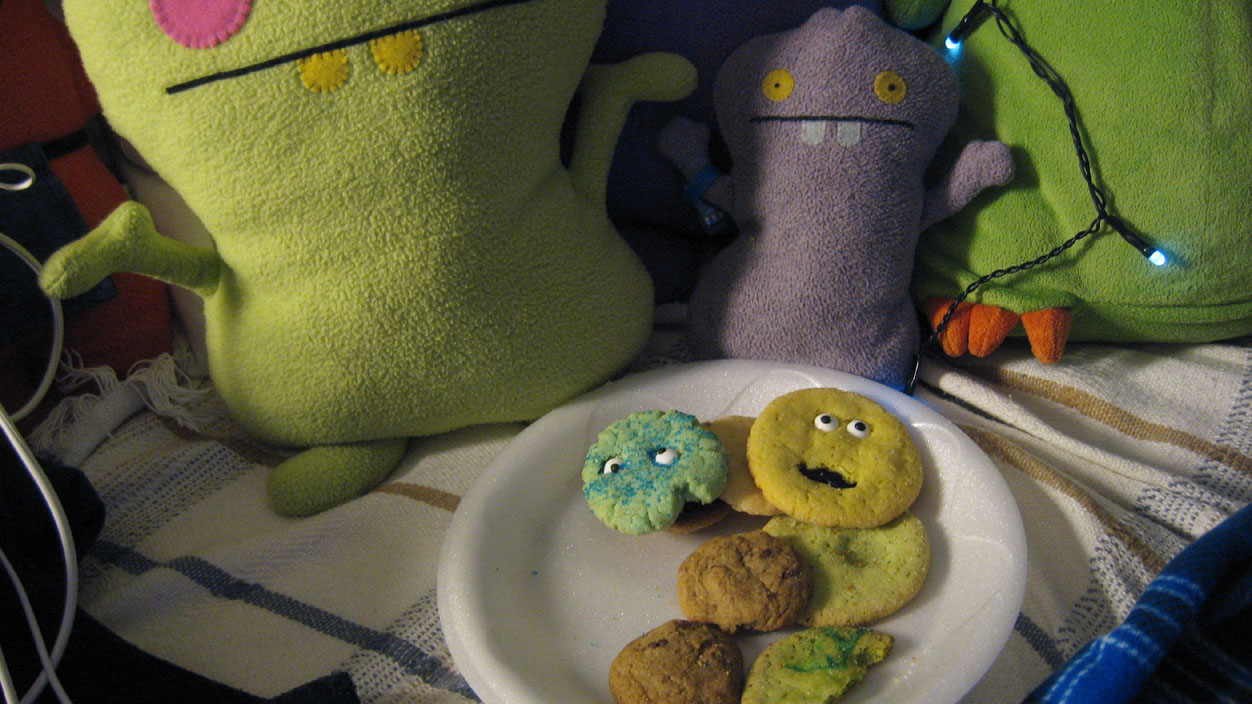 Posted by wappellious at 2:36 AM No comments: