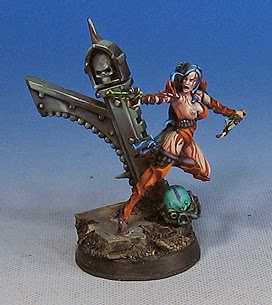 Another Vestal from the Dark Eldar Army.

I also had a bit of fun with the base, playing around with color as much as anything else.

Since there were so many warm reddish colors on the figure itself, I experimented with lots of subdued greens on the metal surface of the upright ruined base structure. 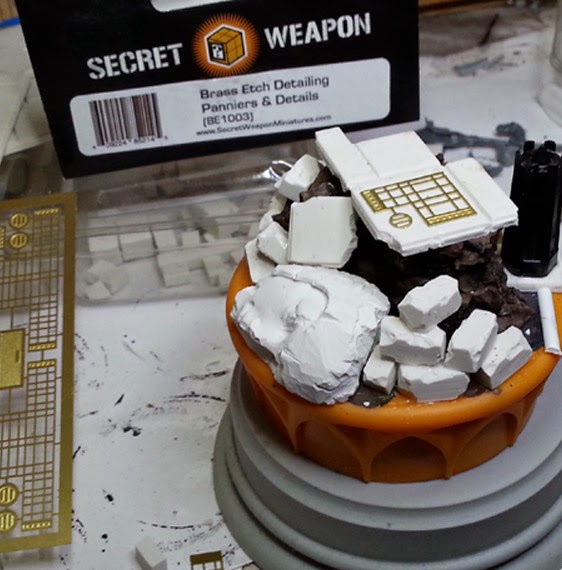 Despite all the mayhem of the last several weeks, experimentation must continue!

I wanted to try a combination of a few Secret Weapon products.  First, we see the very nice resin plinth from Secret Weapon. 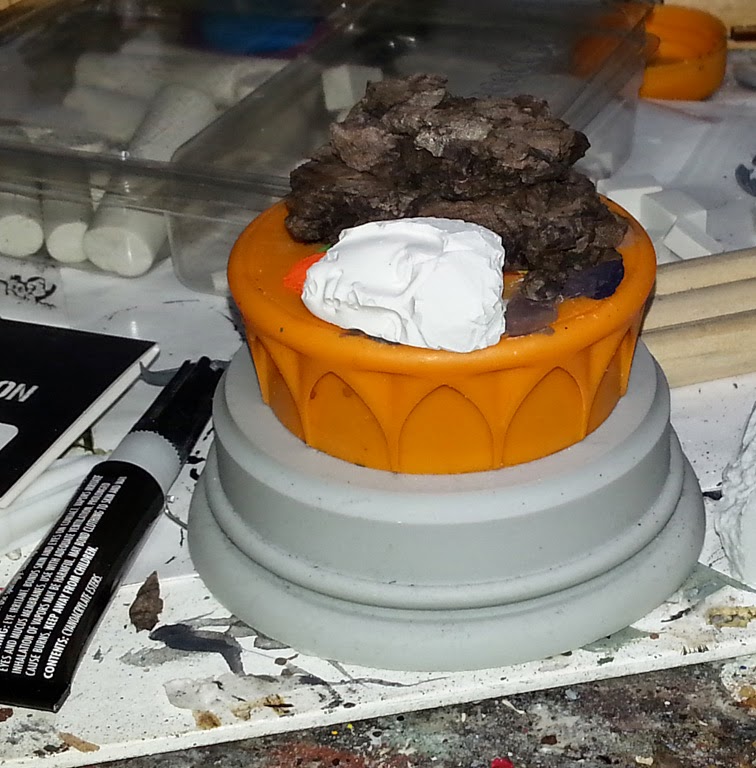 I wasn't exactly sure on what I wanted to use, so I had a collection of items on the table, including some sculpey that was pressed into those Happy Seppuku moulds. 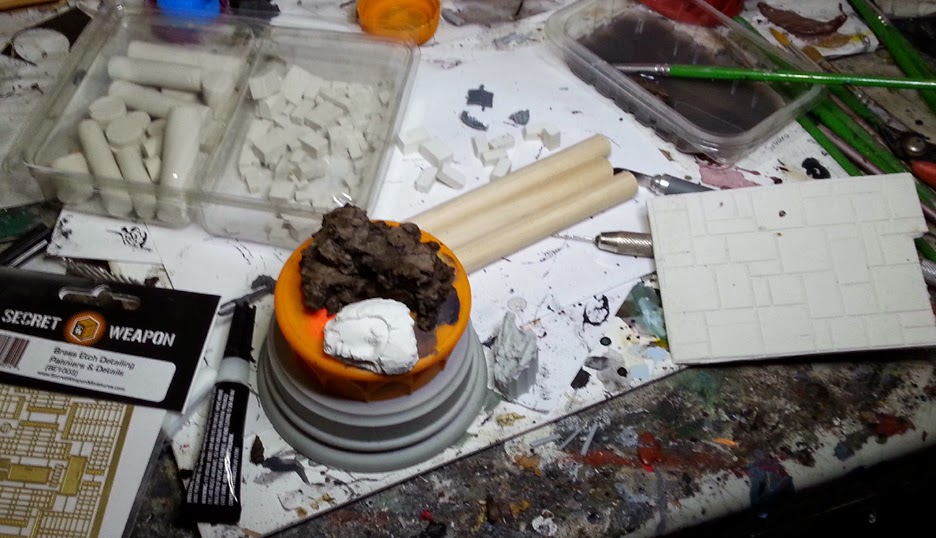 I decided to put some sculpey bricks on the base, as well as a power generator sort of thing, which will provide a possible light source on the figure.  This way I could light it from below, and that would be very fun! 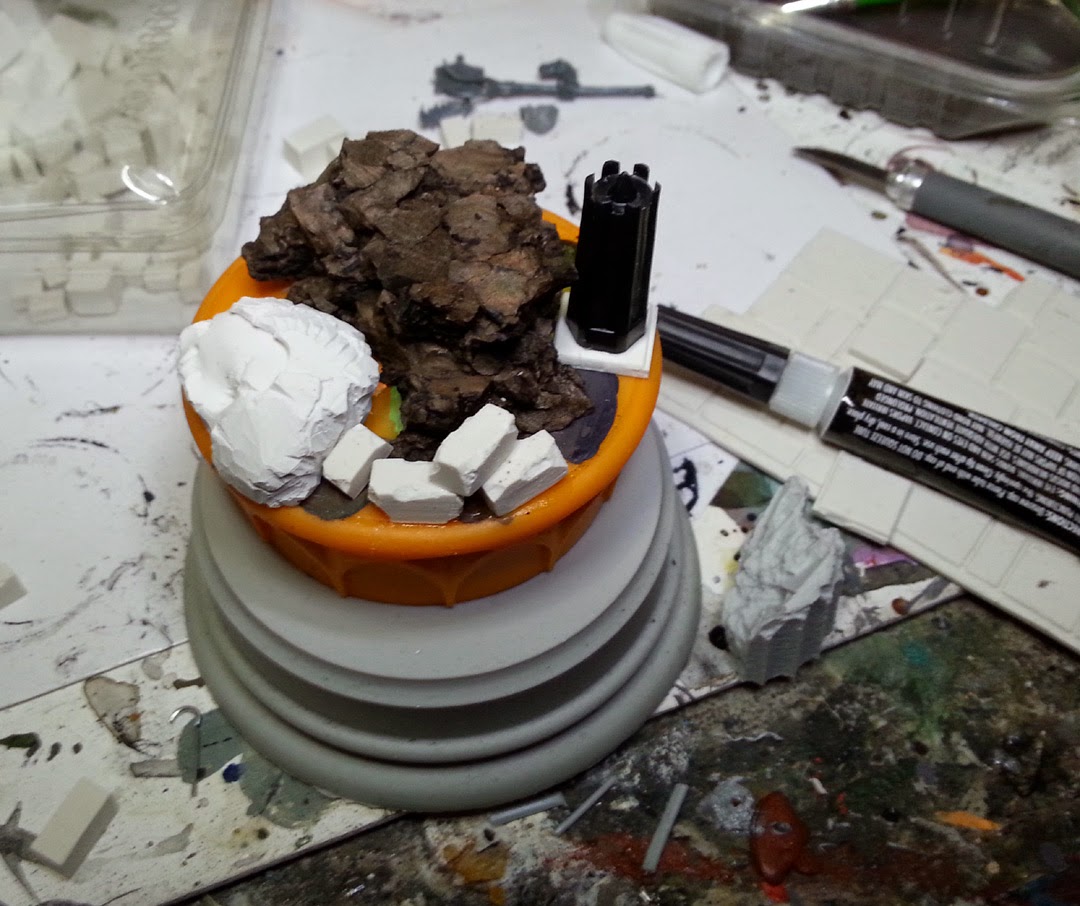 More bricks are put down.  Each time, I take the pristine sculpey bricks and break off the corners. 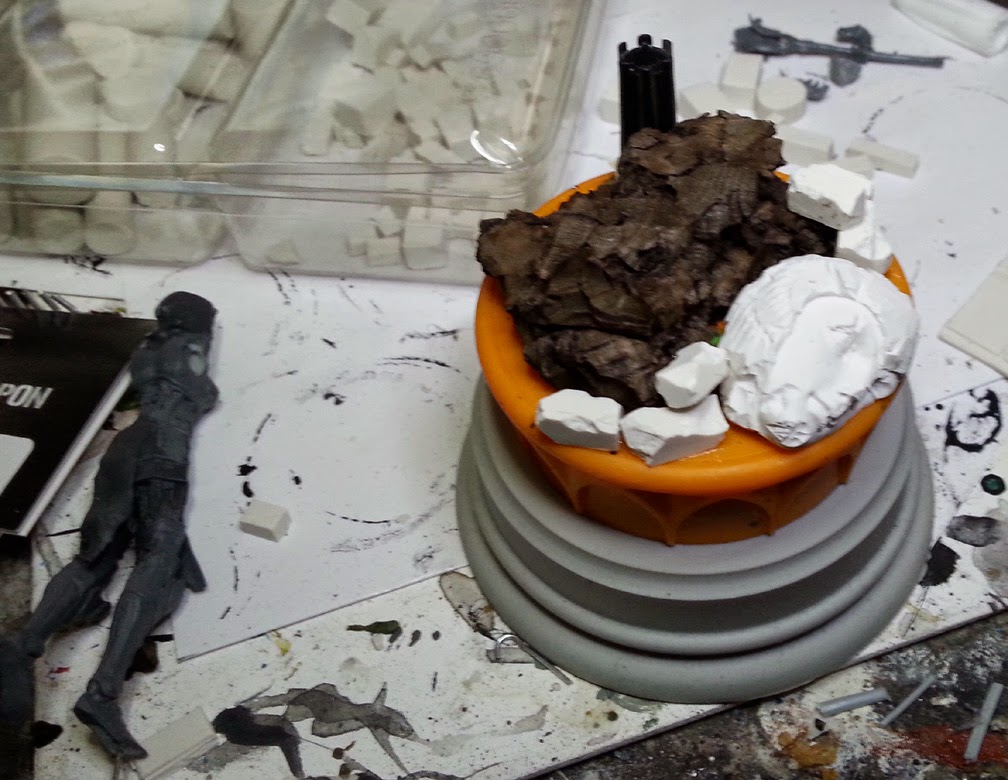 The original thoughts for the base kept changing, as I started to focus more on testing out a new combination of materials. 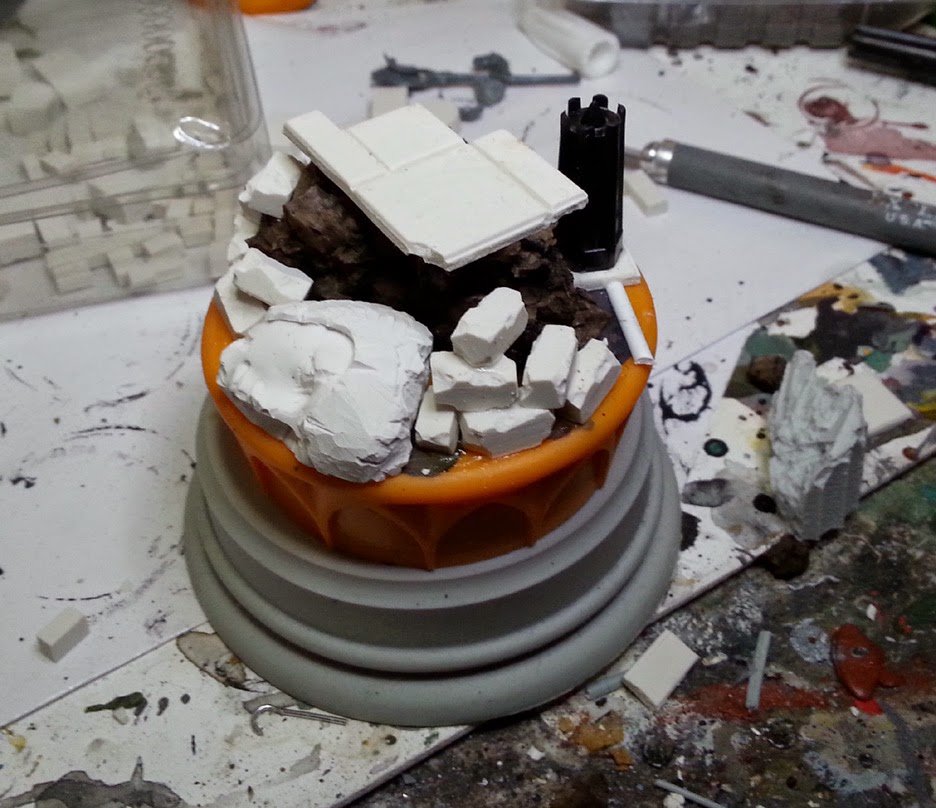 The sculpey pieces are mostly in place... I wanted the broken pieces to tie into the statue head, which was yet another change. 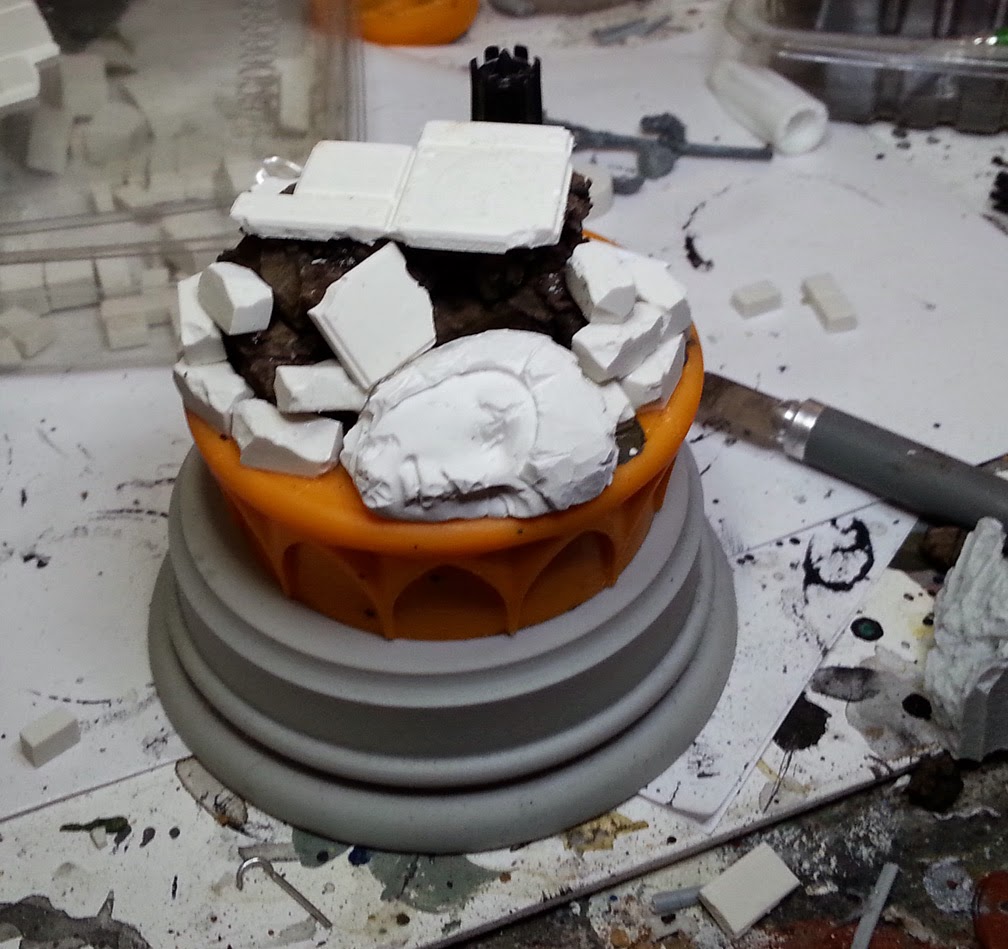 And here we go!  Some brass etched pieces from Secret Weapon miniatures that are normally used on the turrets of tanks, etc.

I thought they might be interesting as high detail elements on sci-fi style bases, offering more tiny details than I could create with my polystyrene rods. 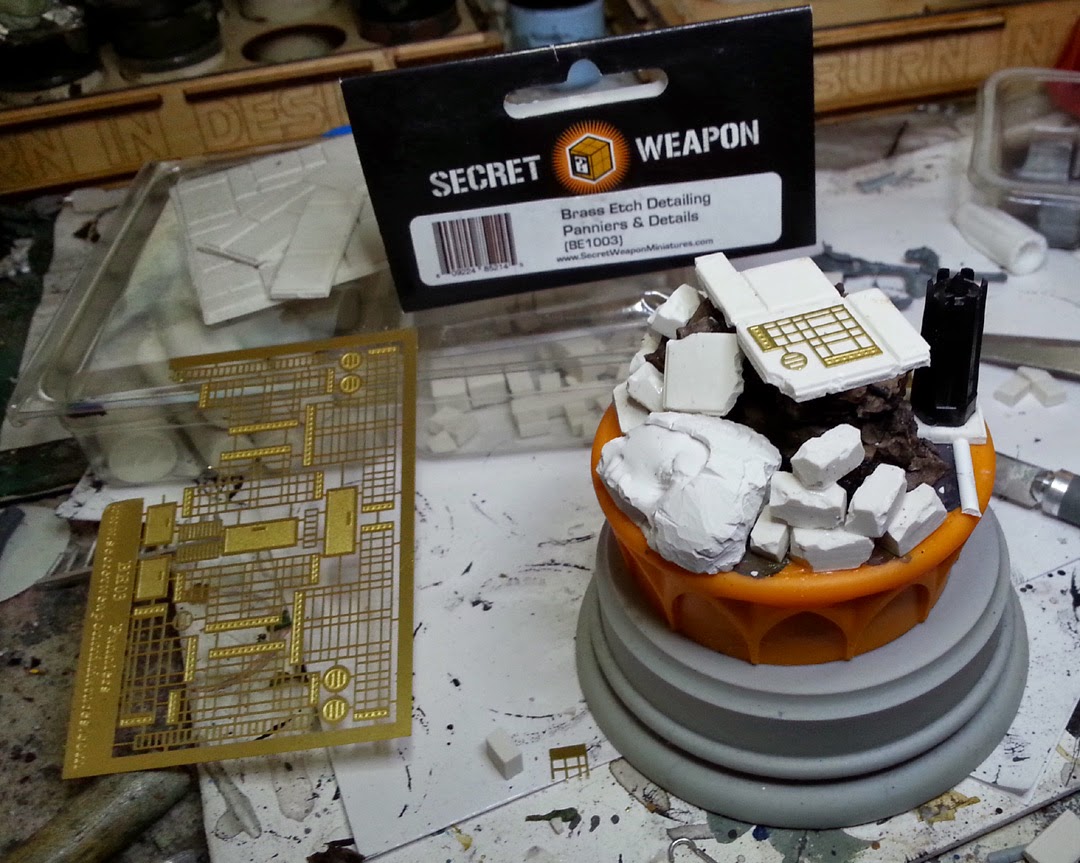 I even placed one bit on a broken piece.

Again, I will emphasize the experimental nature of this base.  The point is to push current methods a little further, and give new stuff a try.

Even if this experiment fails, as some have, it's a win either way, since I will have learned a lot.

I have created entire tables of terrain and done scratch sculpted miniatures which would never have been possible if I had not continued to try new things and push boundaries.

Yes, you will have to get out of that comfort zone, which can sometimes be scary, but you might find some small technique that can become much bigger later on!! 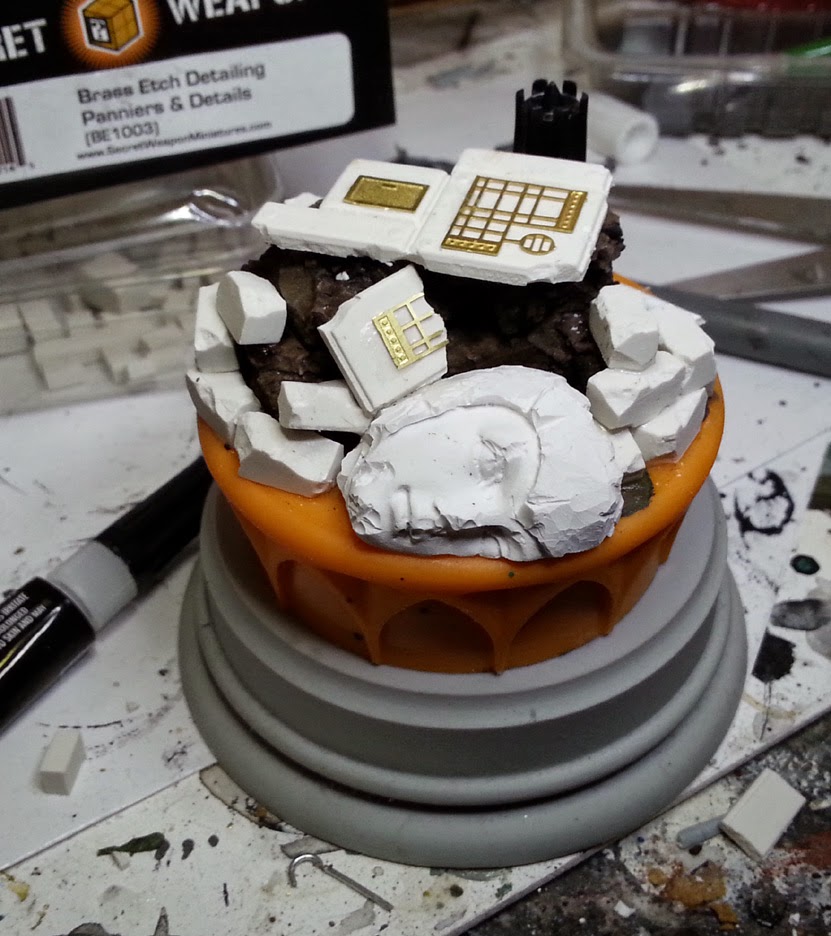