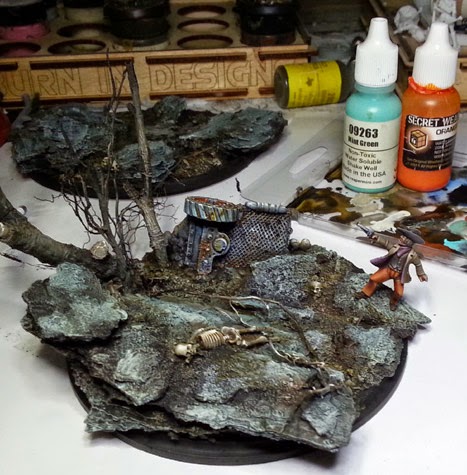 All right!  It's time to shade and tint these huge bases!  So, we deploy our Secret Weapons... 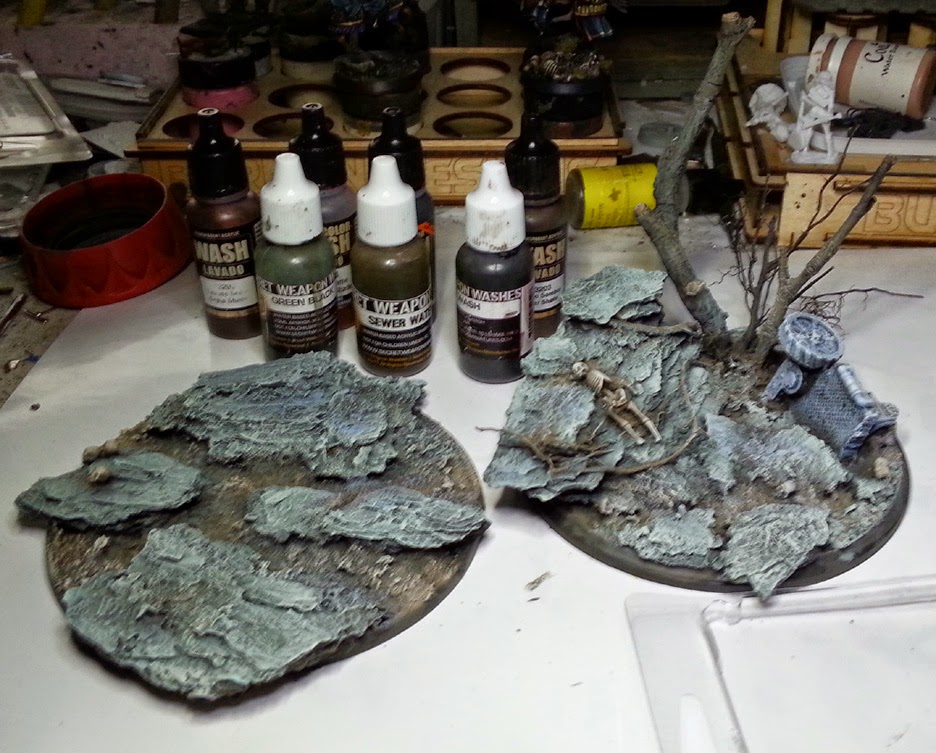 The colors are placed on the palette just as if they were regular paints.  There will be a lot of mixing, both here and on the bases themselves. 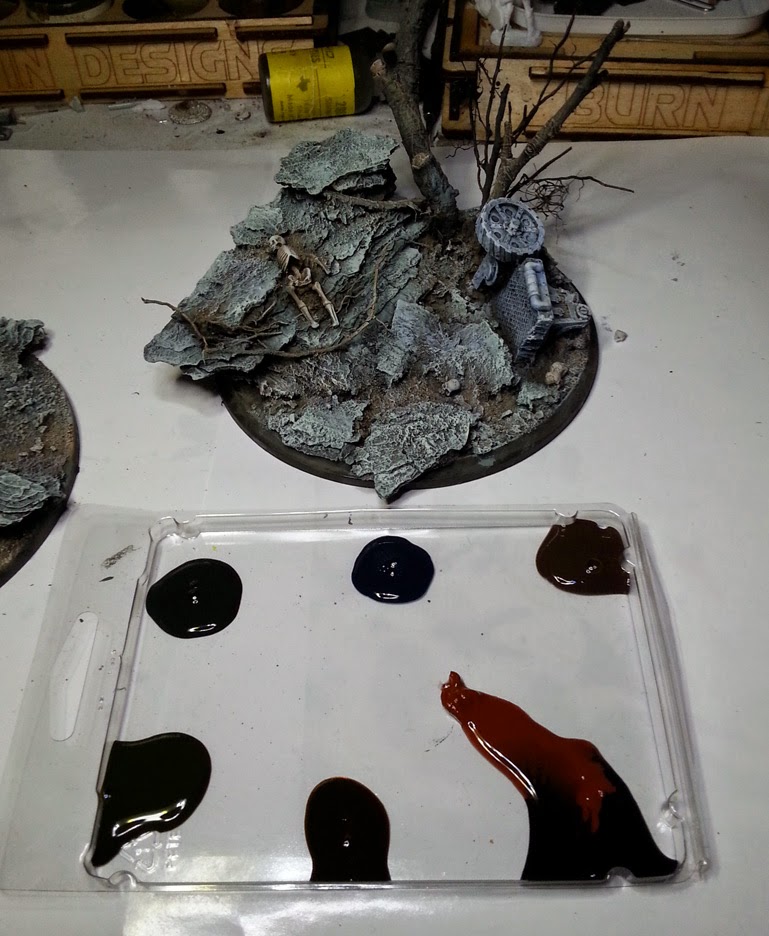 As you have seen me do before, I am working "watercolor style", the negative spaces around the areas which I want to have lighter.  You can see how much this brings out that shape! 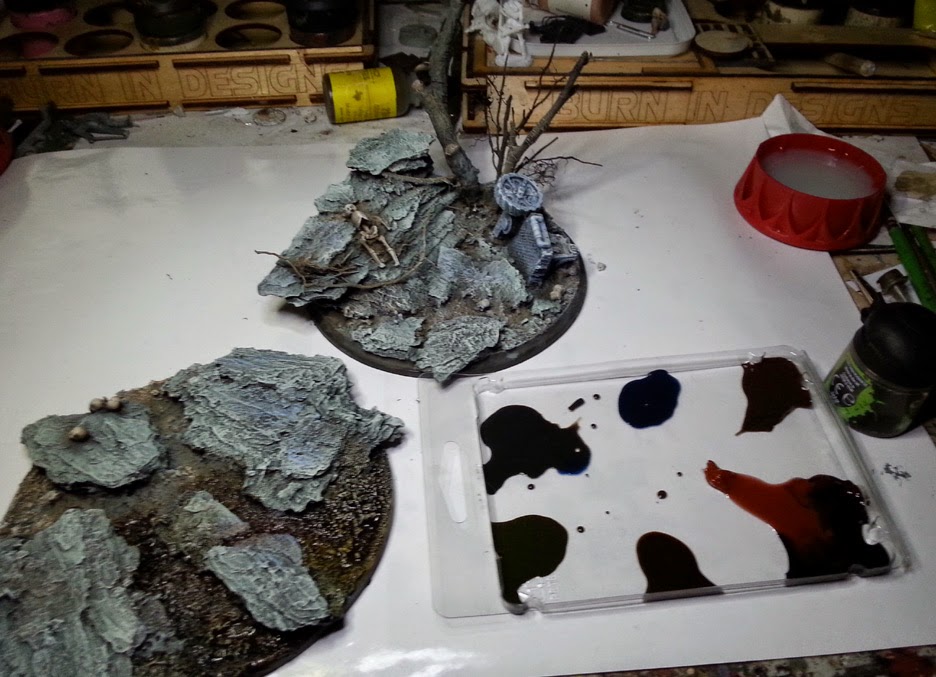 As I moved around those dark areas, I made sure to change the colors that I was placing, allowing them to mix together on the base.  For the most part, this whole area had glazes which were warmer. 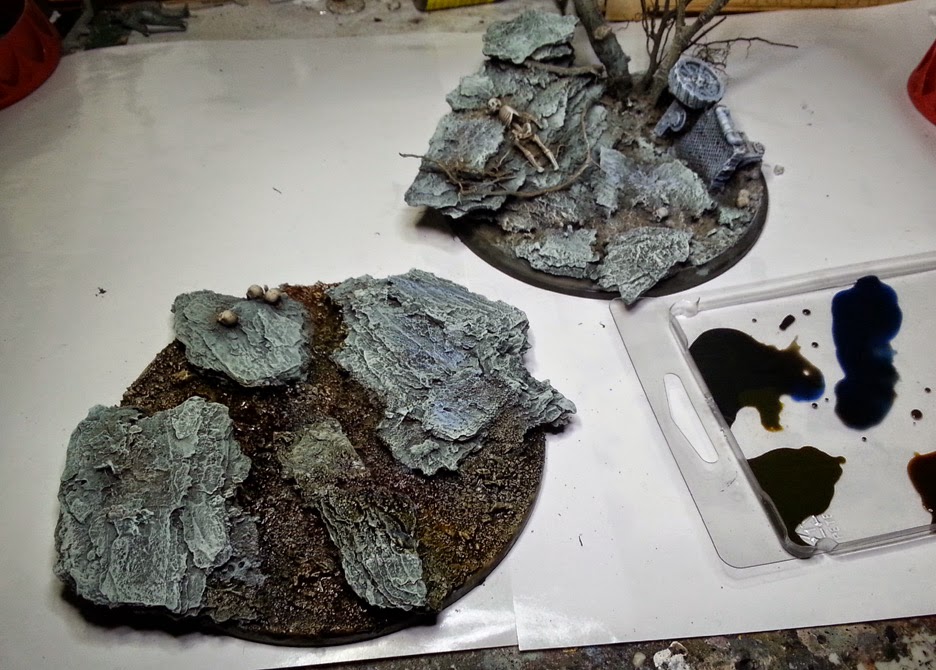 The same process will happen on this base, with the exception that the warmer colors will be used on the rocks more than the other base (which is another one that will be splashed with water). 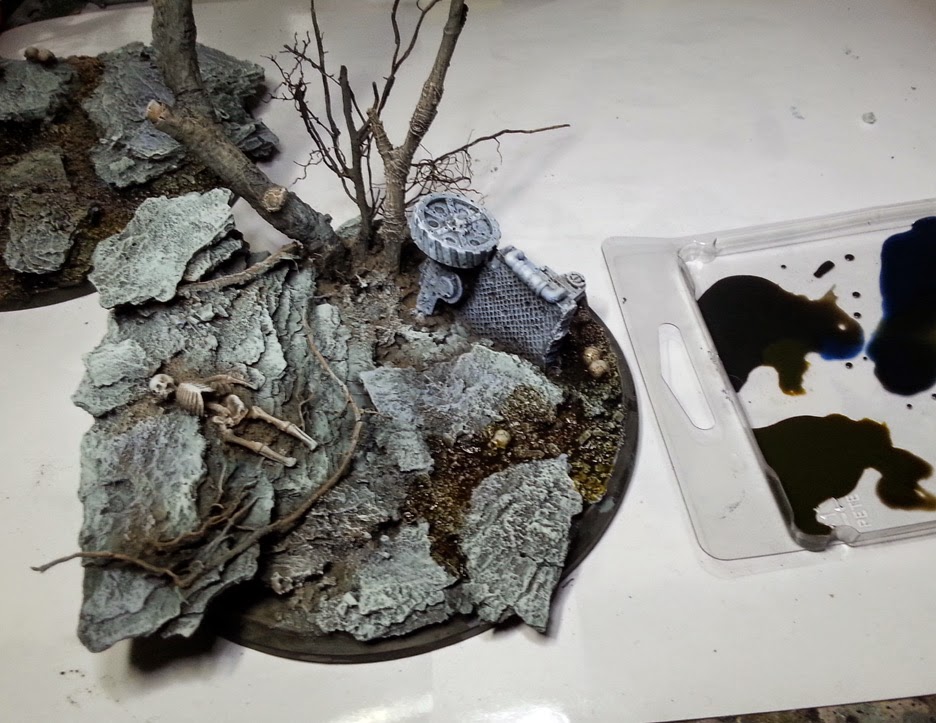 The blue/black mix I am using on the rocky areas is watered down, and even dabbed away with a paper towel here and there. 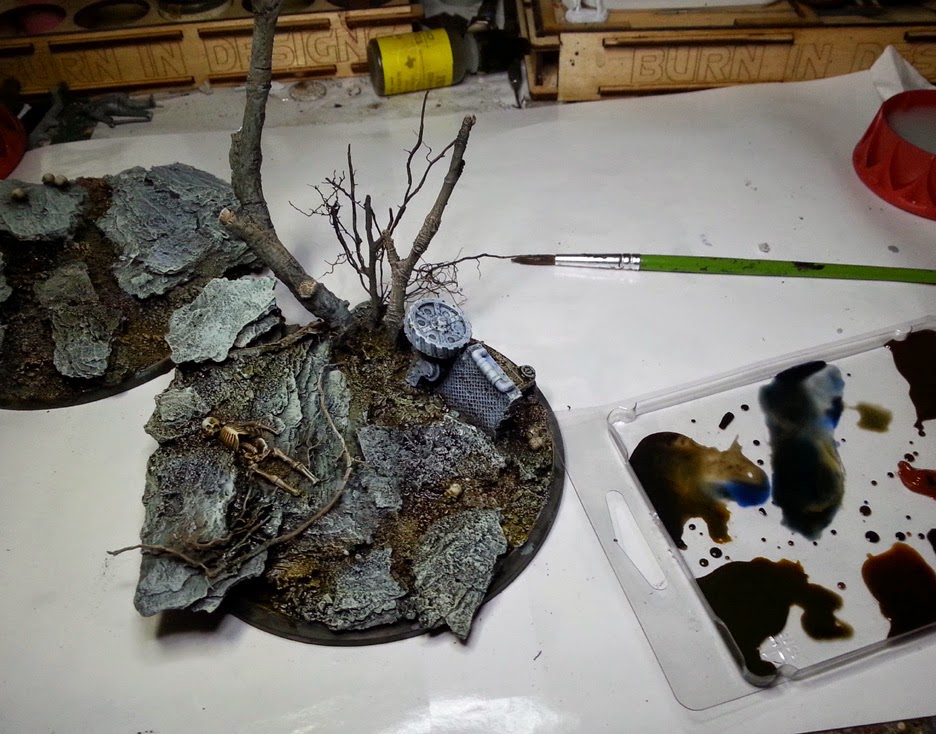 Back to the other base, to put some warmer darks on the skulls... 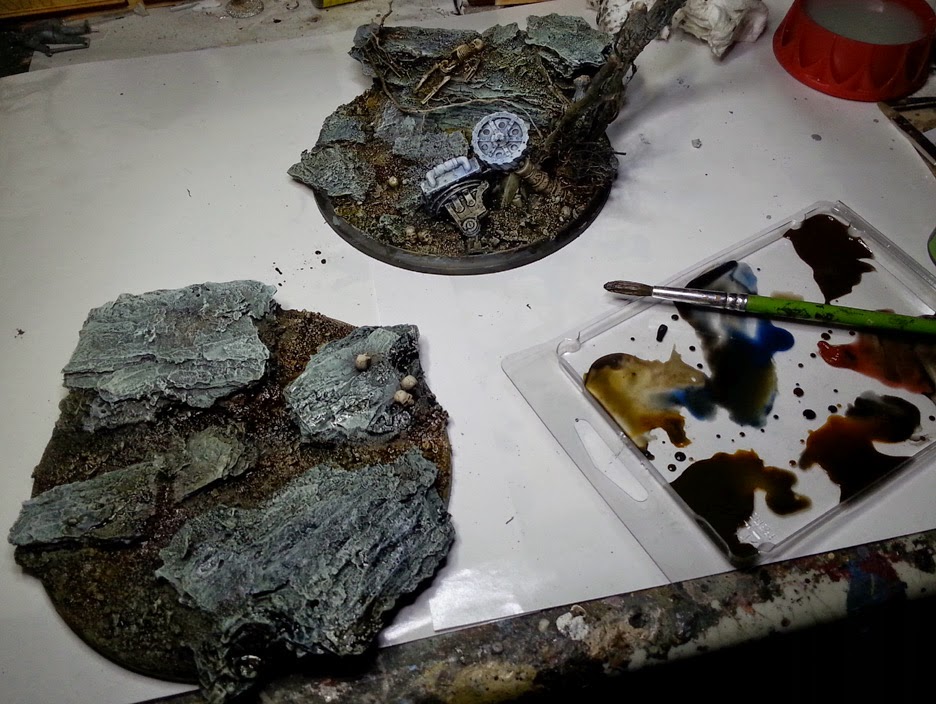 Things are starting to take shape.  I am already starting to mix regular dark paint colors into these glazes, such as Reaper Brown Liner, to make them more opaque. 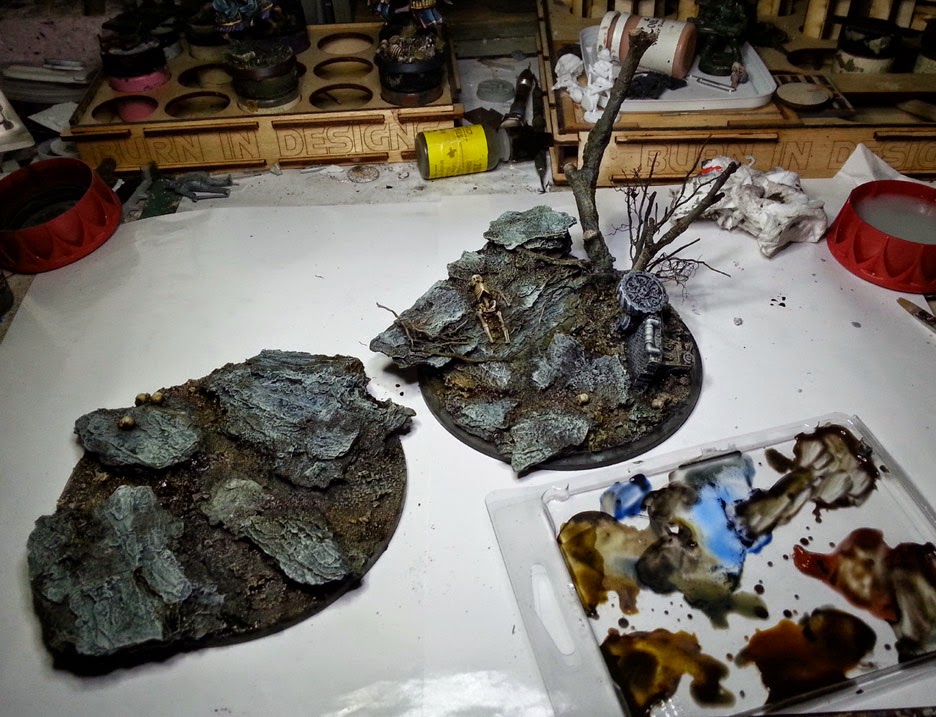 This is for areas that I want to be very dark.  However, since there is some wash mixed in, they are still slightly transparent.  I can still wipe away the excess when necessary. 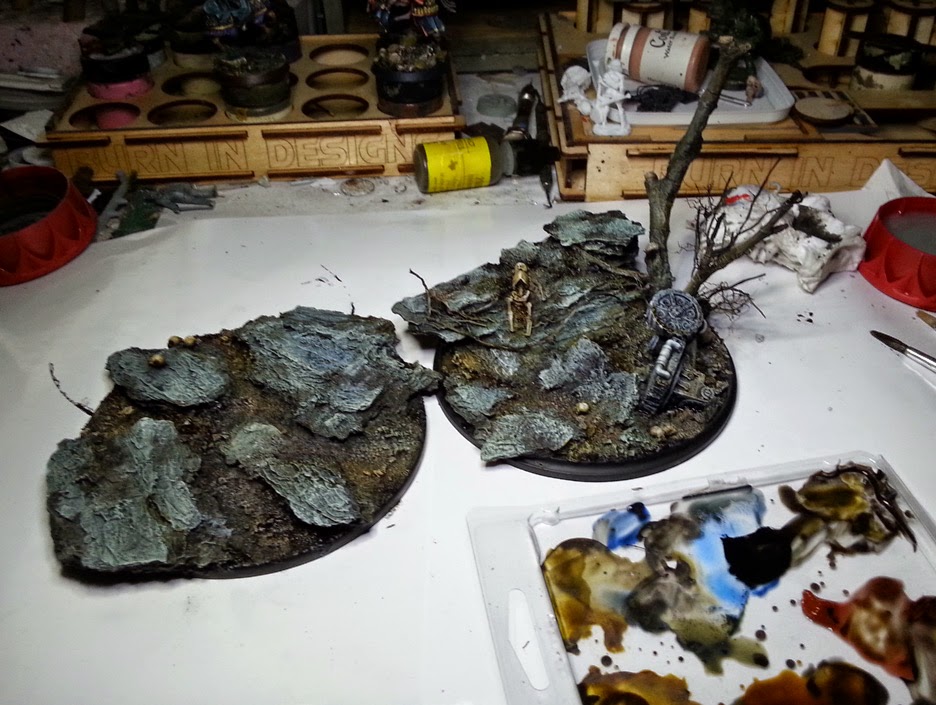 With the primary sections of the base finished, I had to work on the ruined Fire Bringer.  The main goal for the color scheme on that was to create a grey that was different from the rocks.  I was using that seafoam green with some very light elf flesh in places.

It was weathered in the same way that I have done on things like the Flame Truck.  I have another WIP series coming up that will show that process once again.  Stay tuned for that! 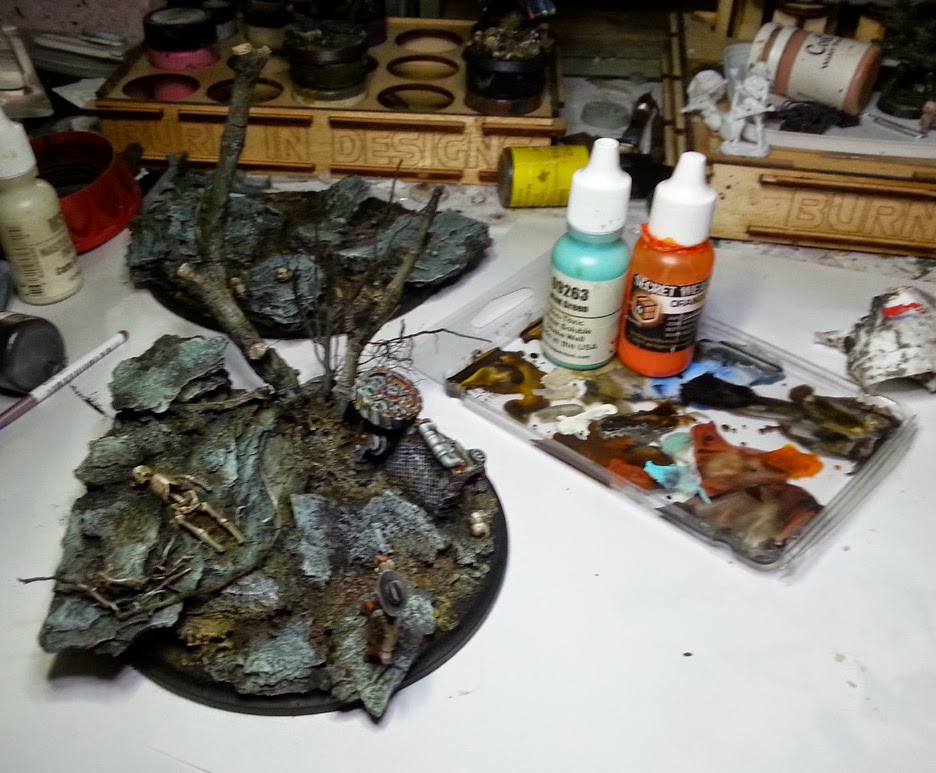 Hey, I could even put my hapless victim (or foolish hero) on the base (I painted him separately). 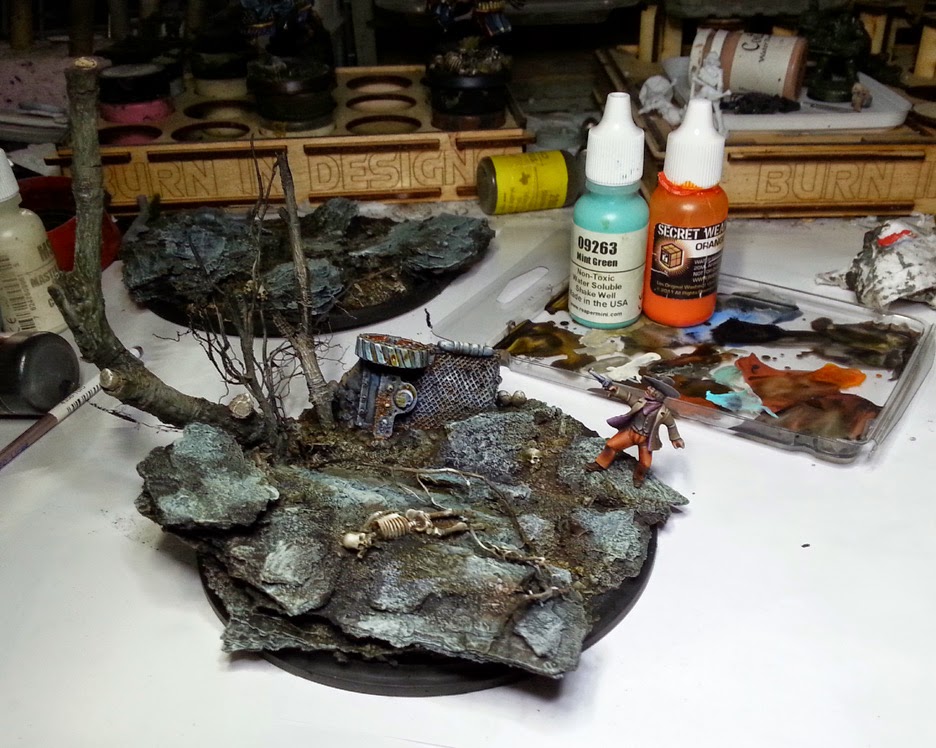 More details will be added, such as tufts, etc., as well as many layers of water effects on the other base. 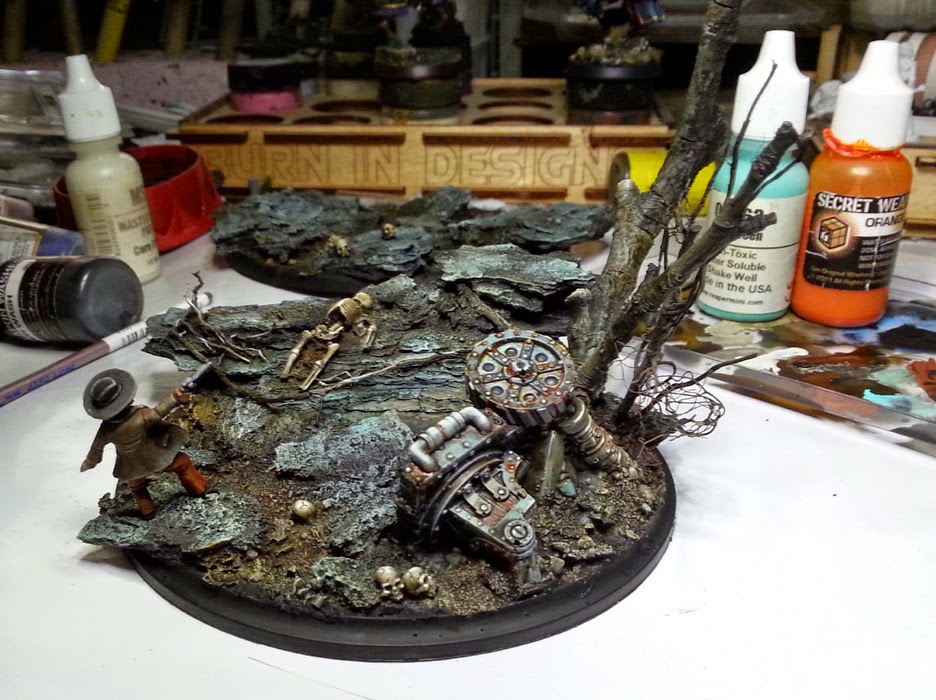 Posted by wappellious at 1:51 PM 6 comments: 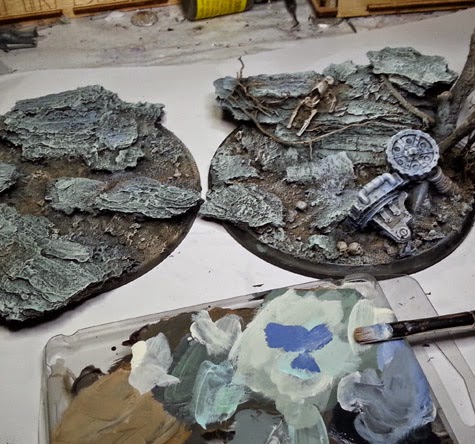 So, with the two massive bases constructed and primed, it's time to get some paint on them!

Let's begin with the shaded basecoat phase.  I have a few nicely worn #8 round craft brushes, and a filbert brush. 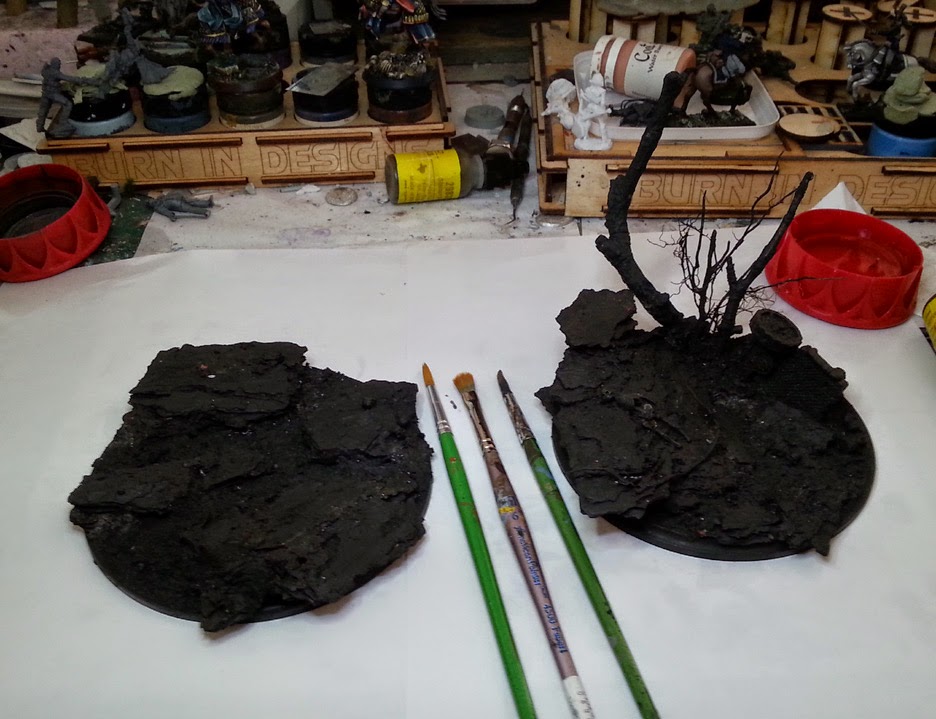 I have a variety of colors available.  Some grays, light greens and an ochre color. I started out with a bit of the ochre mixed in with a dark gray.  Just like the previous base designs I have been making, this will have a greenish gray rock surface. 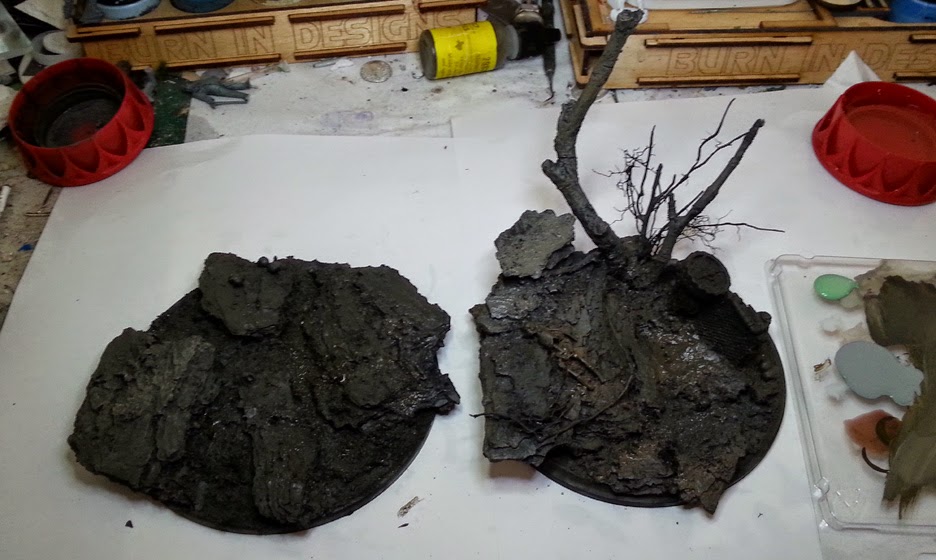 And thus we have green and gray together at last!  The filbert brush allows me to apply this color lightly over a broad area very quickly.  The rounded edges of the brush mean the strokes can be feathered as the are applied. 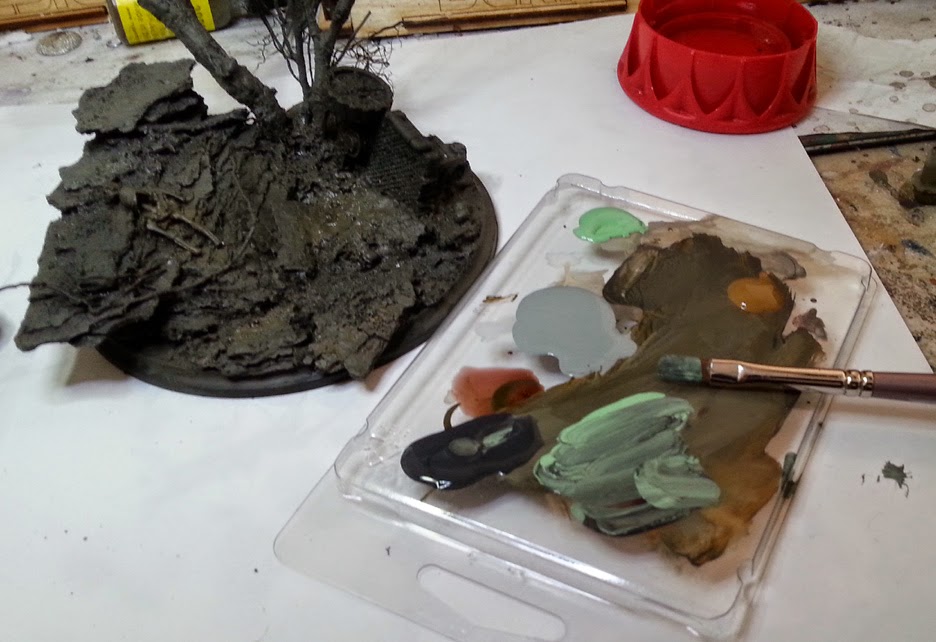 More of the seafoam green is added to the mix.  Next to the warmer background tans, it appears quite cool. 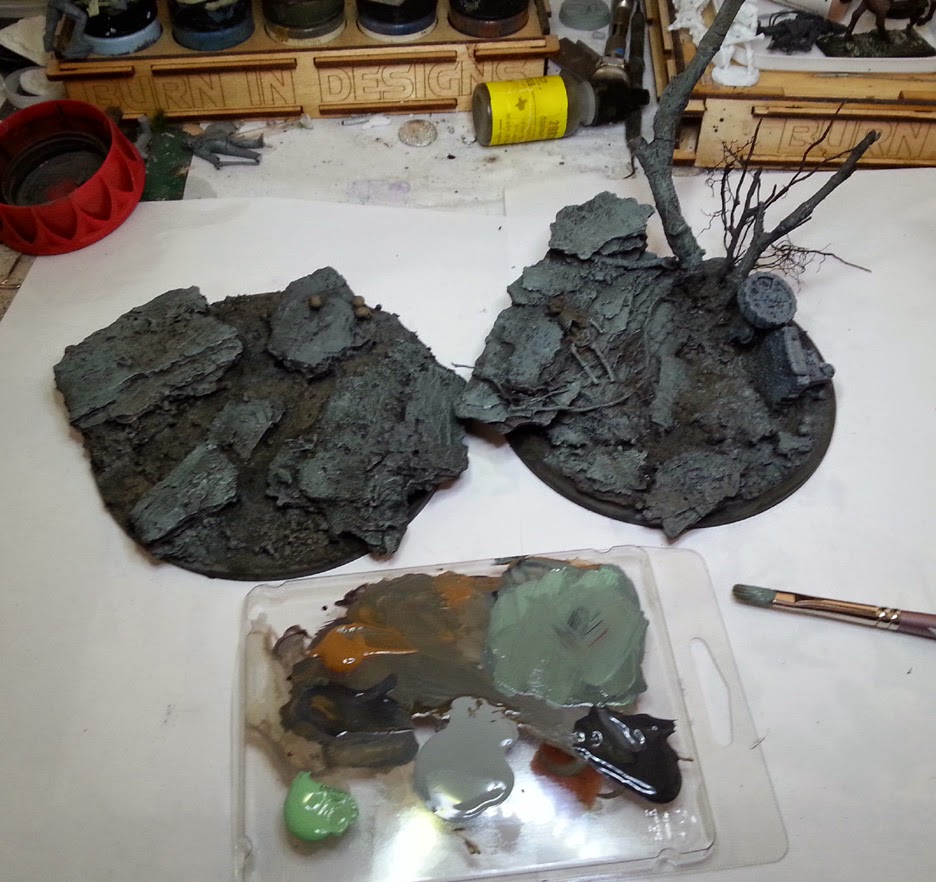 As the layers get progressively lighter, you will notice that I am trying to create a center of interest, or focus, by making one area lighter than the rest.  It's almost like a spotlight.

When I shade other areas darker in the glazing stage, this effect will be even more pronounced. 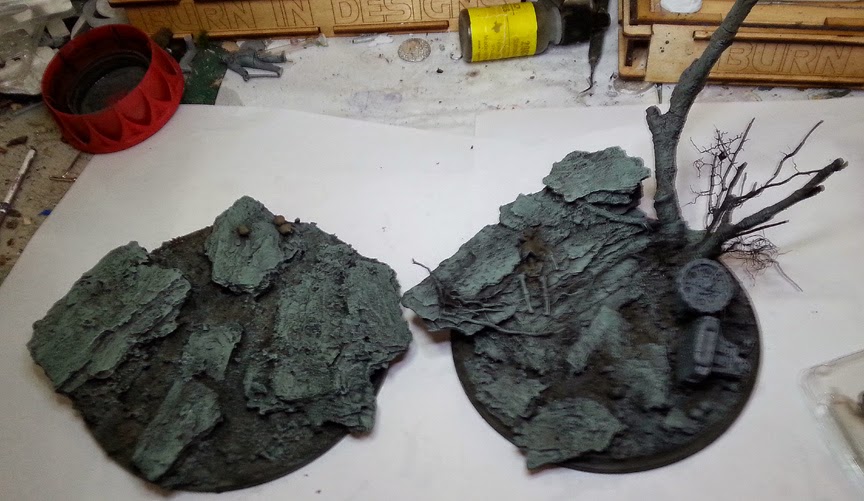 Lighter shades of tan give some depth to the value pattern, or division of dark and light colors on the surface.  In another sense, it will make the dirt look more like... dirt. 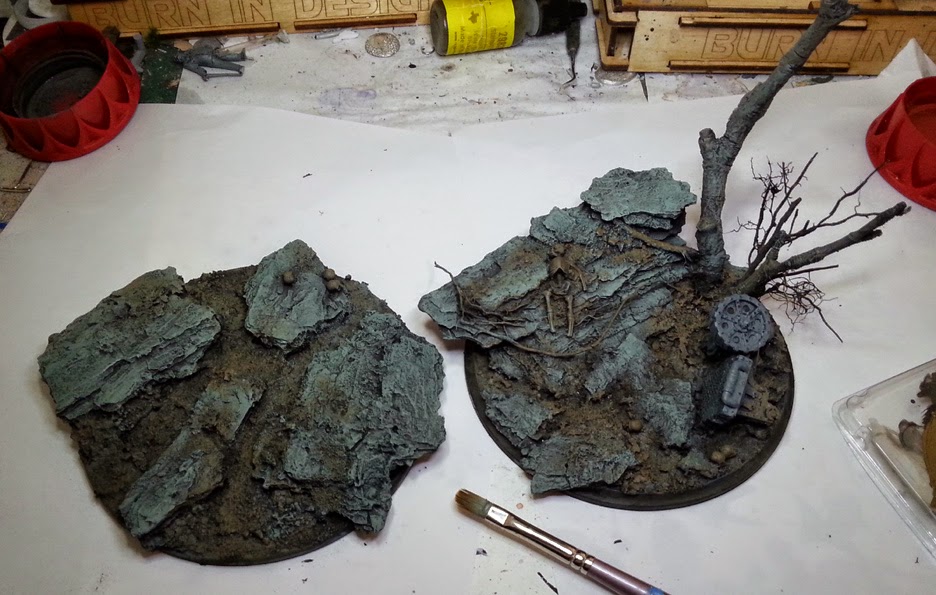 The little extras are also lightened, such as the skulls and skeleton! 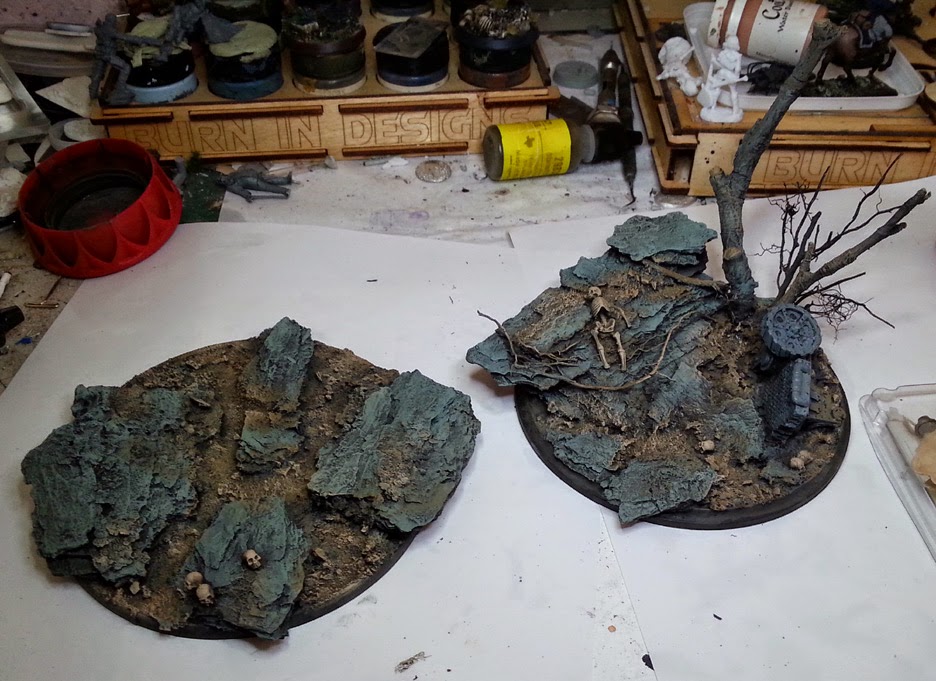 The final applications of light colors in the grays means that the shaded basecoat is nearing completion.  That feathering of brush strokes that I mentioned earlier is very crucial... as a light touch will keep my darker shades preserved. 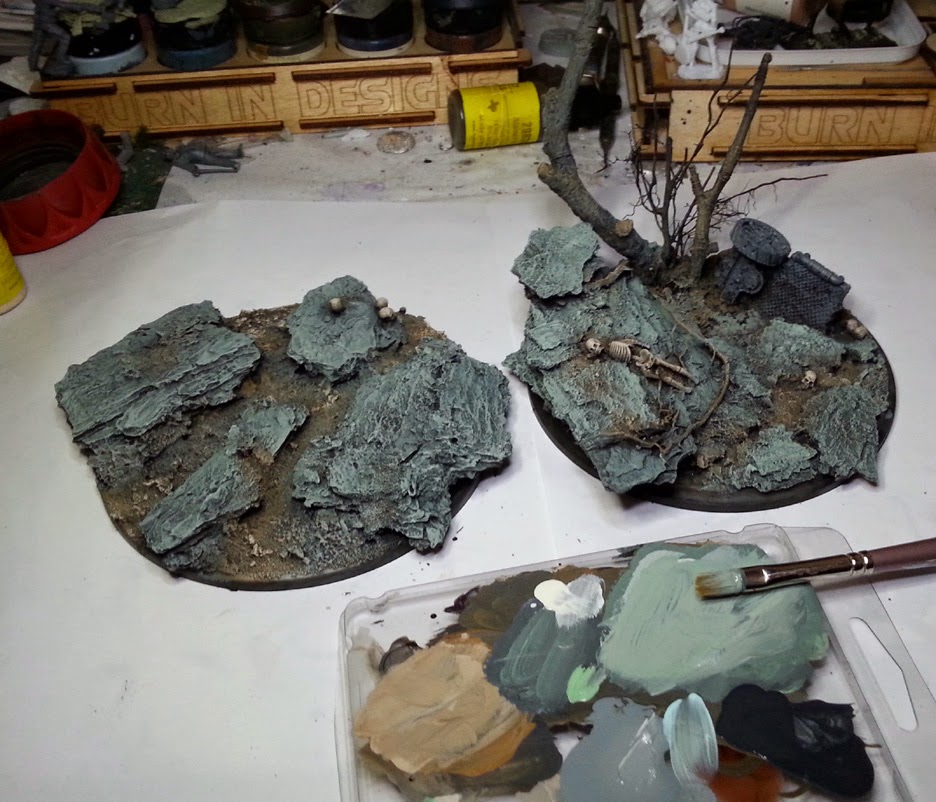 I also added the lighter tans to the tree branches.  The whole concept behind the shaded basecoat technique is to create a generic set of lighter colors which I can tint and shade with later glazes.

I can keep color mixtures simple this way. 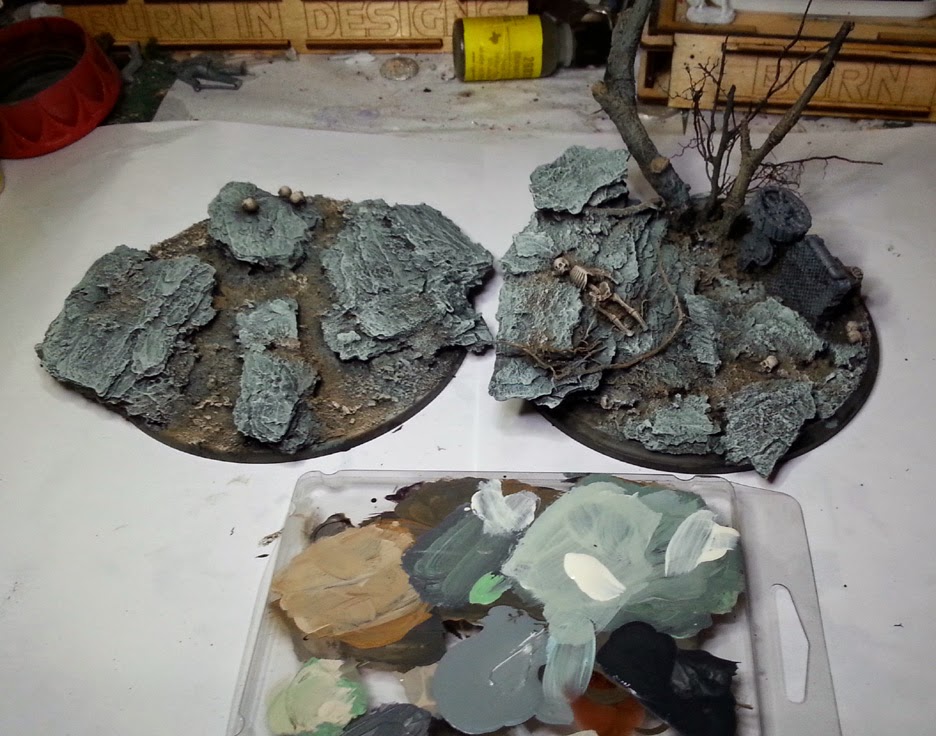 Some lighter shades are applied to the ruined Fire Bringer as well... 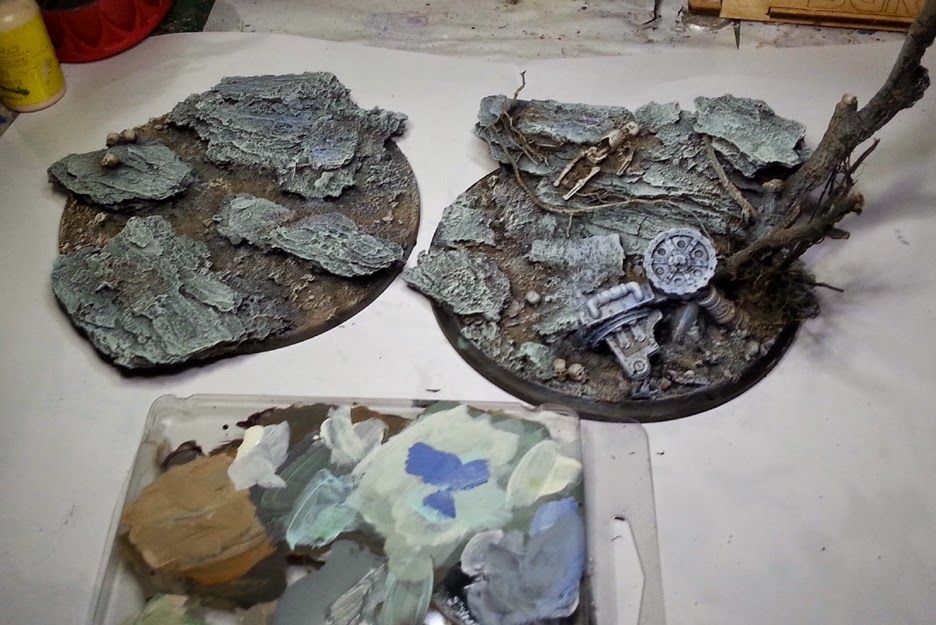 Coming up next... the usual suspects!  Stay tuned. 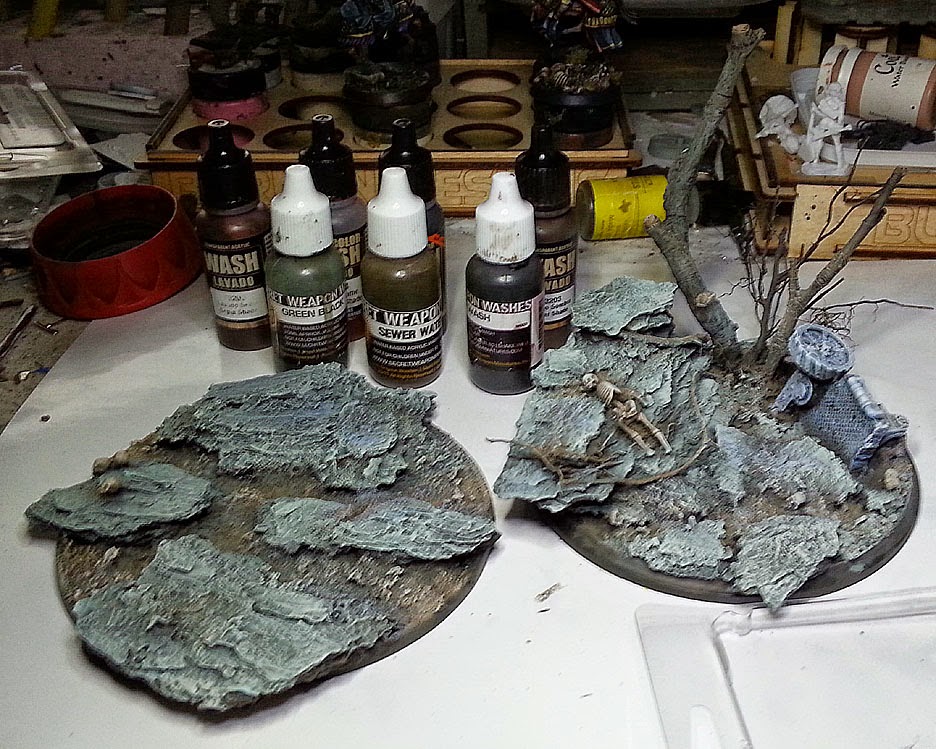