Another round of knotwork 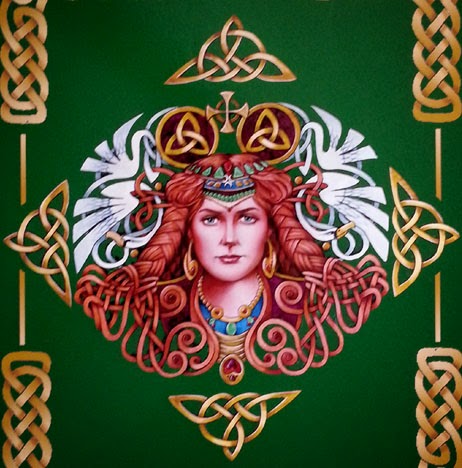 I was able to locate a few more of the Celtic theme paintings.  This is one of the last titles that I painted, called Branwen, Goddess of Love.  It turned out to be much more complicated than the initial sketches, which was very unexpected.

Combining the zoomorphs with the knotwork and so many 'realistically' rendered elements was a challenge. 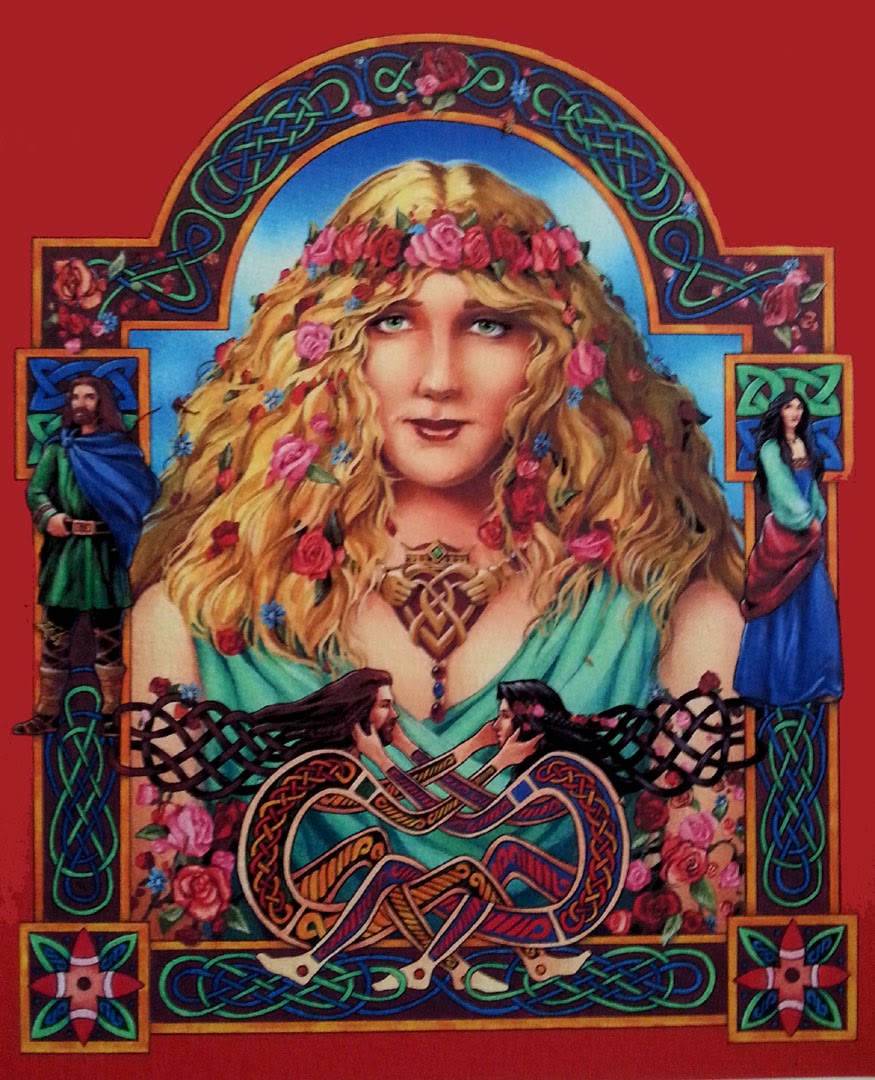 I have posted this one before, but it works a little better in this context.  Talk about complexity!  By far the most difficult and challenging to execute.  It was like 6 or 7 paintings in one!

This was eventually made into a puzzle, which makes a lot of sense when you think about it!

It is called Spirit of the North. 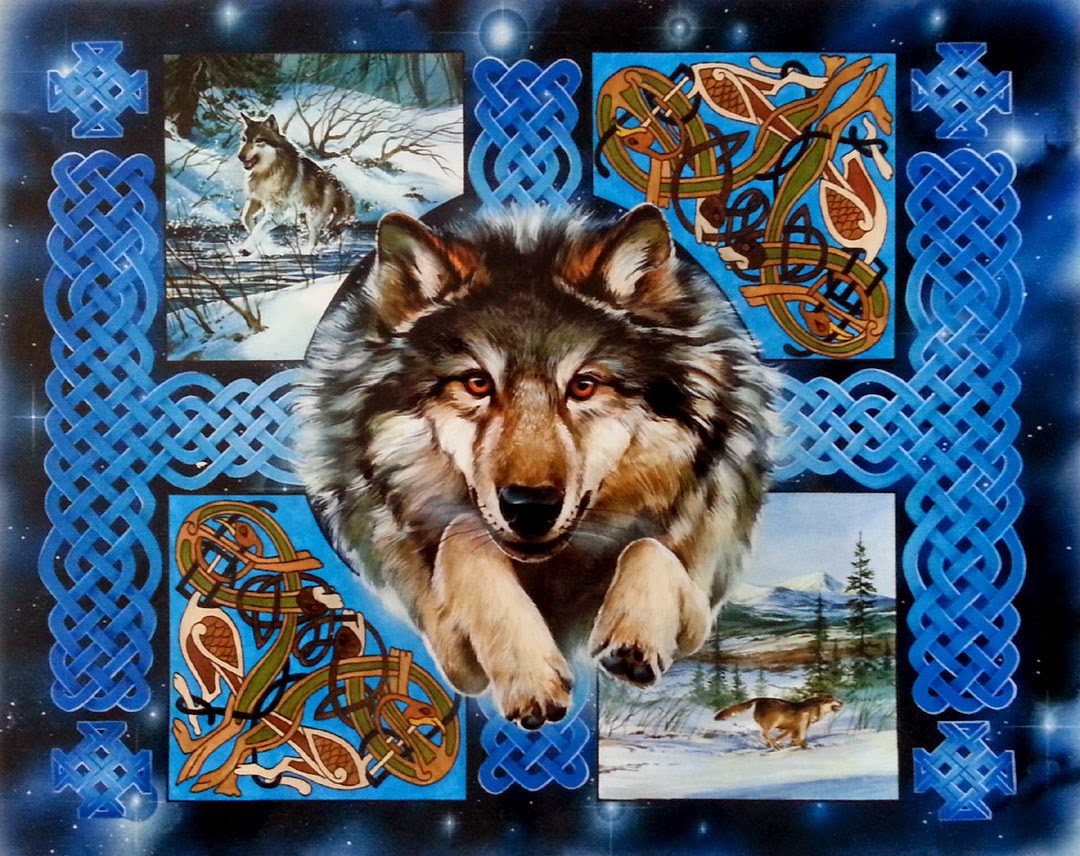 Another elaborate piece.  Arianrhod.  Just drawing out he zodiac zoomorphs too most of a week.  A LOT of masking to do here... possibly even more than Spirit of the North 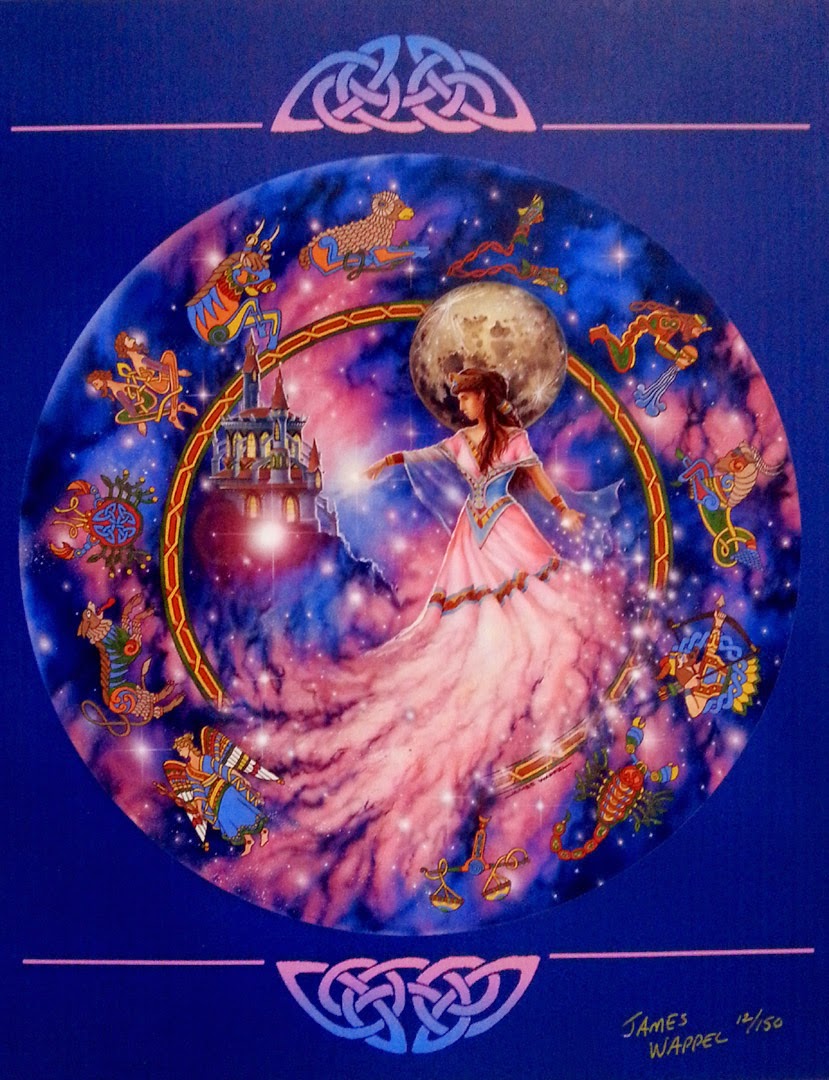 This is Bridget, which was the very first Celtic knotwork piece.  The inspiration came from a photo of an ancient coin that had an image of the face, and some simple swans intertwined with the hair.

I painted this designs on numerous drums... it was perfect for a round surface. 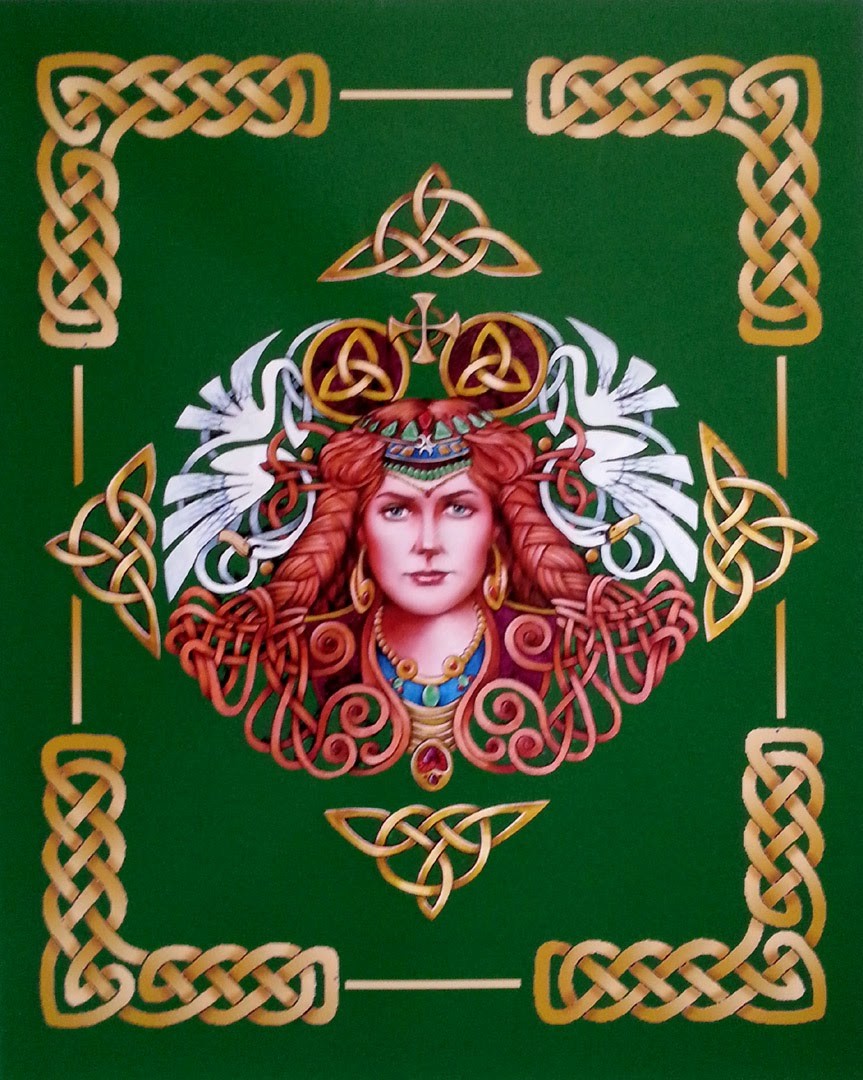 The fight for Caen continues 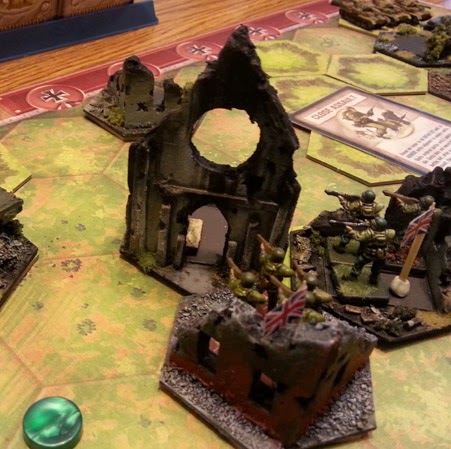 Since the all important town hexes were the main priority for the British units, lots of command cards were going to be used to funnel stuff into that particular fray.  Once again, the Brits hit the Germans in the town hard, claiming a majority of the town. 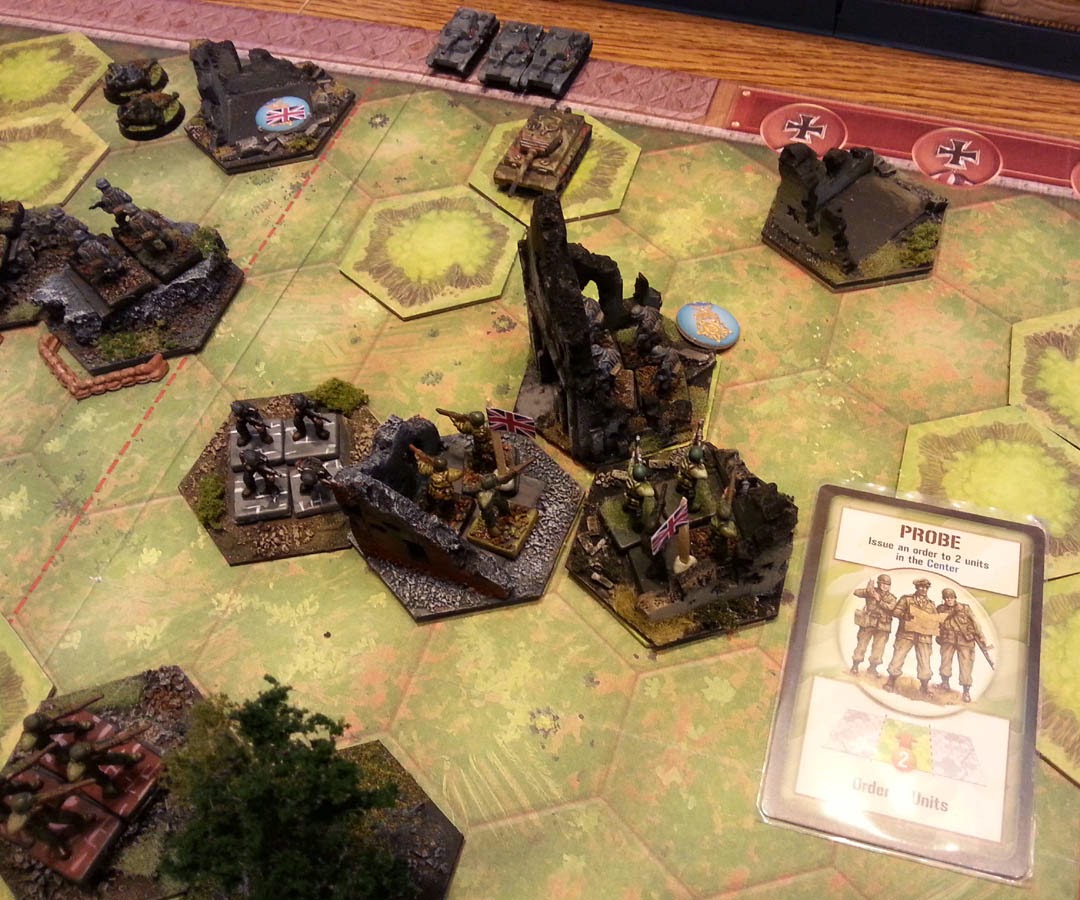 The dastardly Axis once again counter attack!  Two turns in a row!  A fierce and bloody struggle ensues. 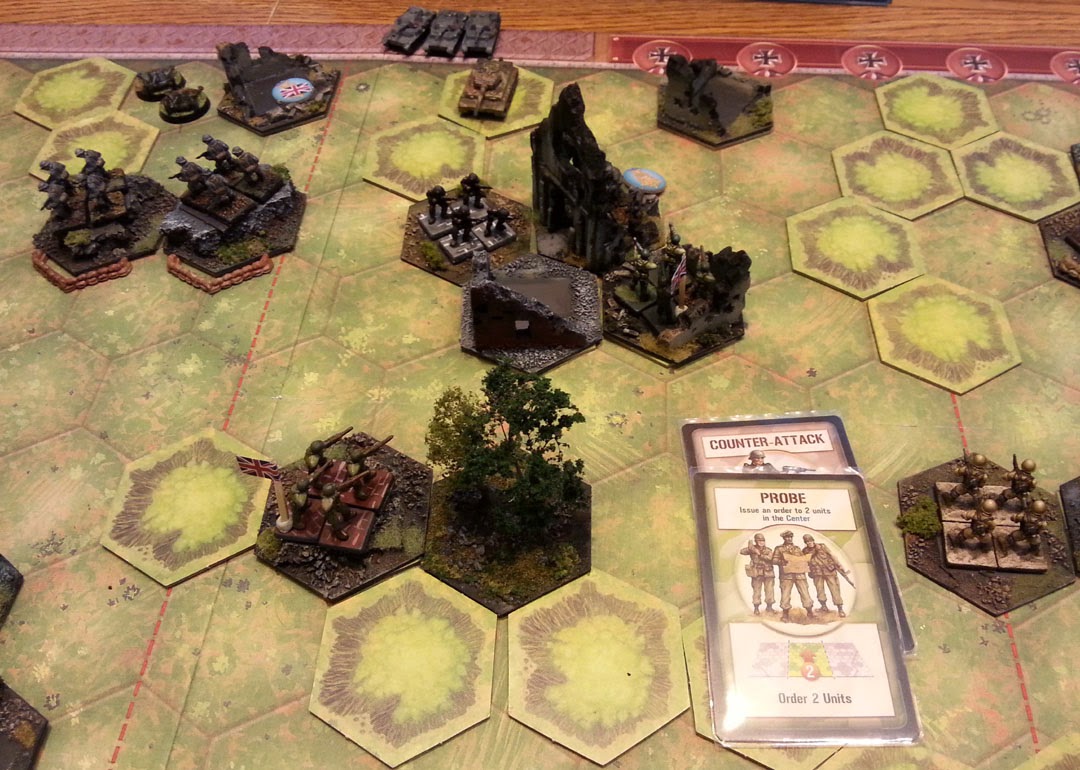 Reinforcements could only be brought up slowly, as the surrounding forests slowed progress... 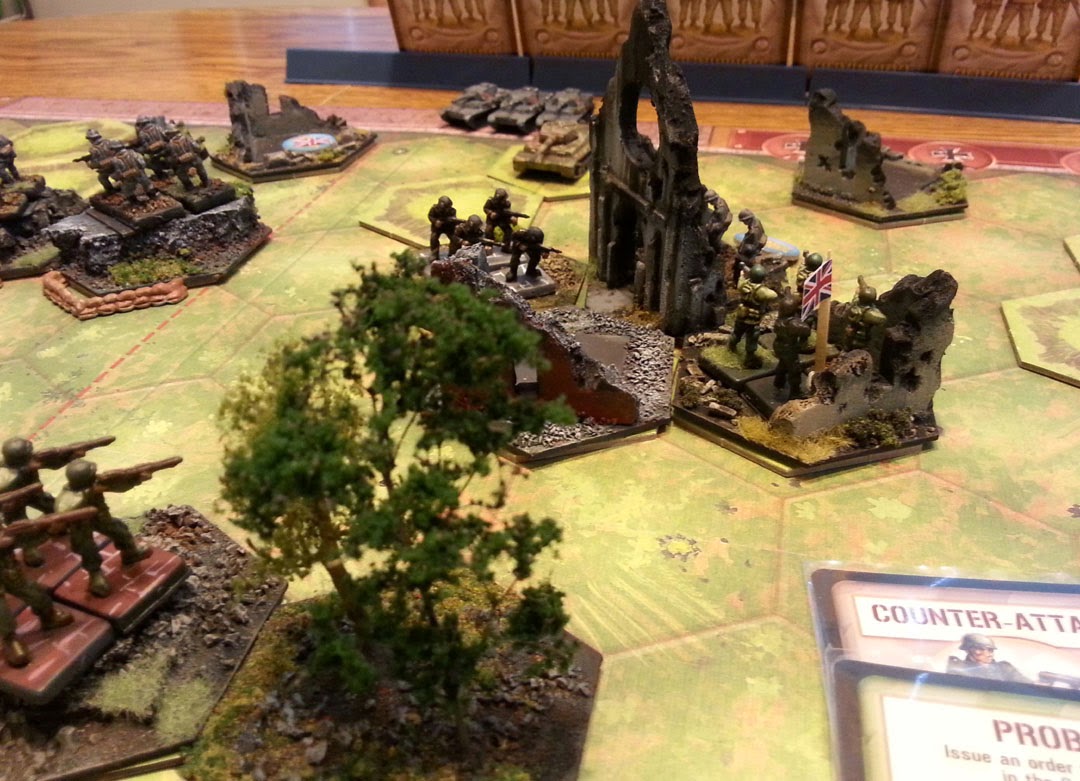 However, those additional fighters do get into position, and an all out blitz from three sections commences.  Armor is now brought in as support, since the Axis infantry has been pushed from the towns out into the open. 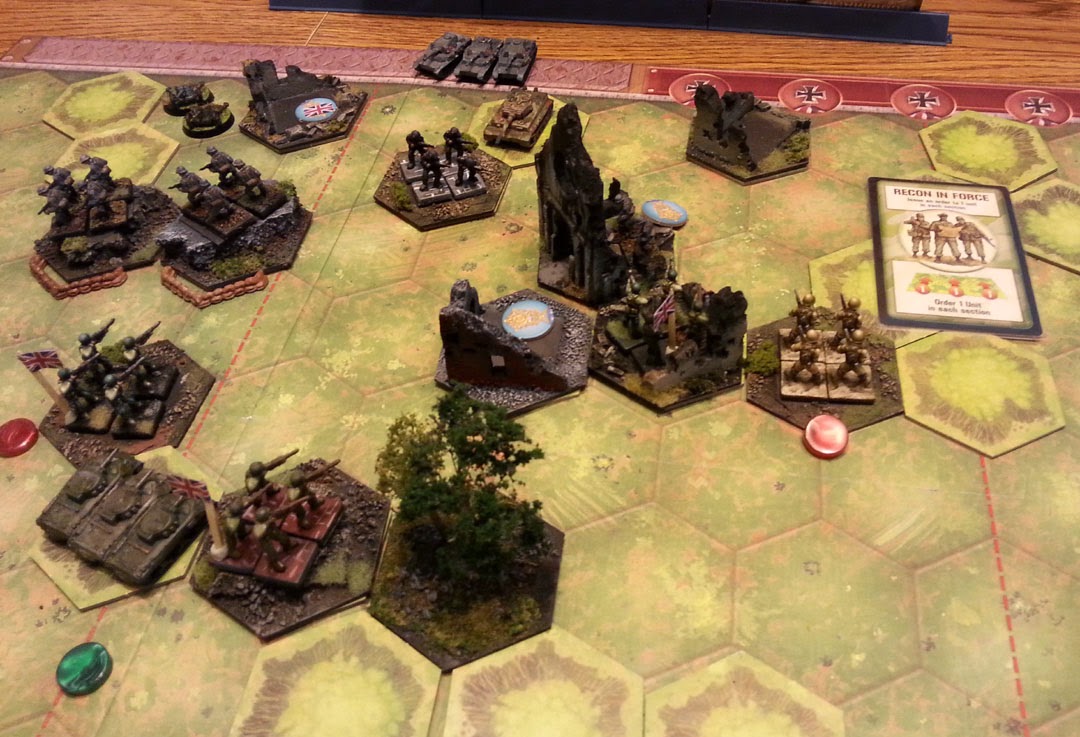 The Germans try desperately to relive pressure on the town's defenders by opening up a new struggle on the left. 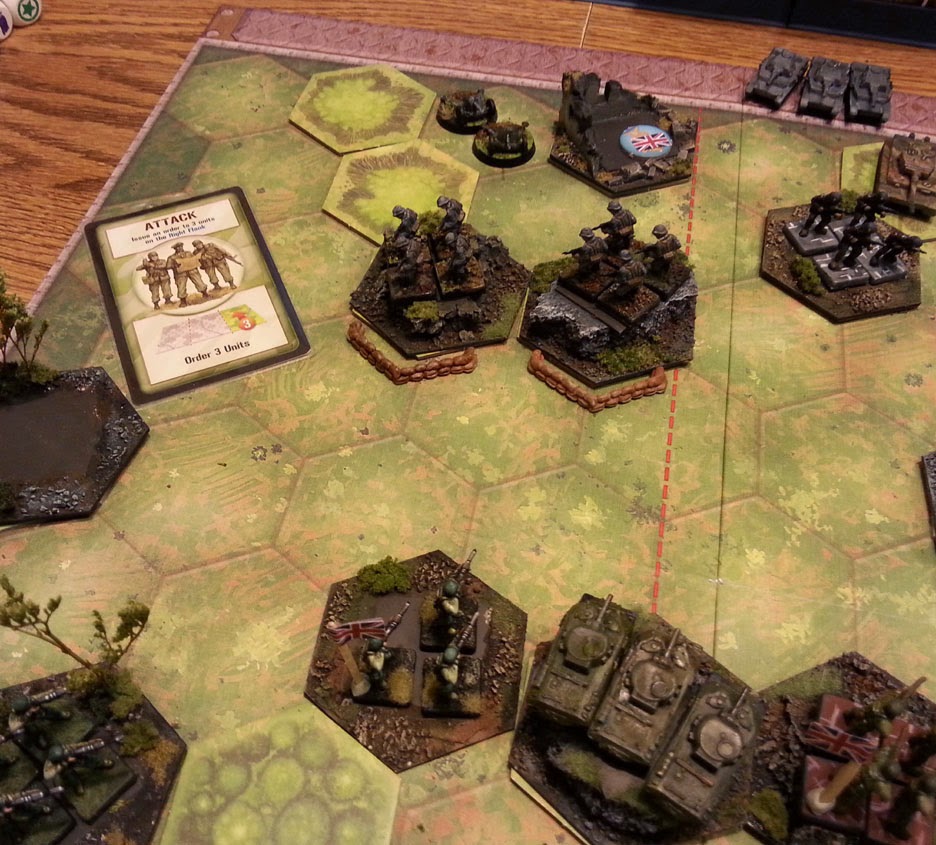 The armor arrives, but has very little success in dislodging the Gestapo unit from it's perch just outside of town.  No armor over run, leaving the Shermans in the sights of a fearsome Tiger tank! 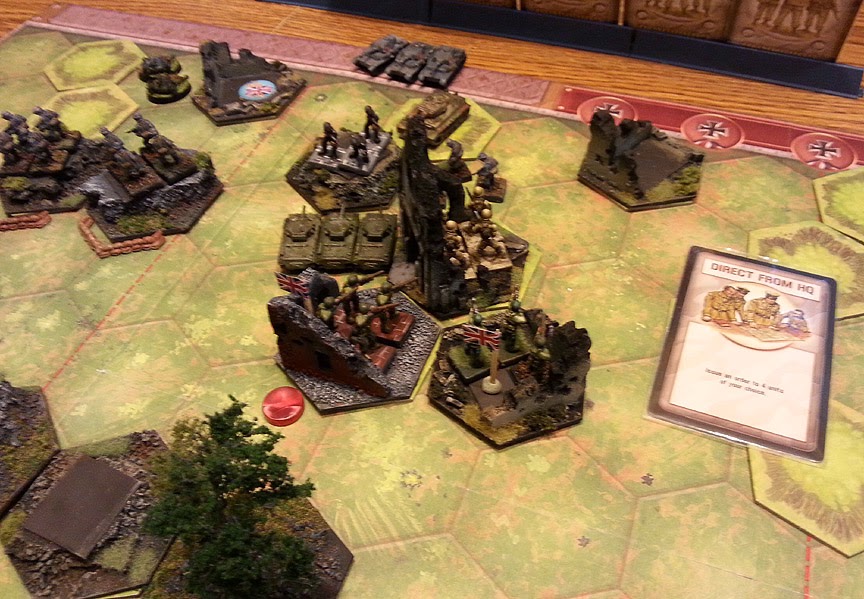 One final attempt to retake the town by the Germans fails, as North Africa troops take heavy casualties, but hold fast! 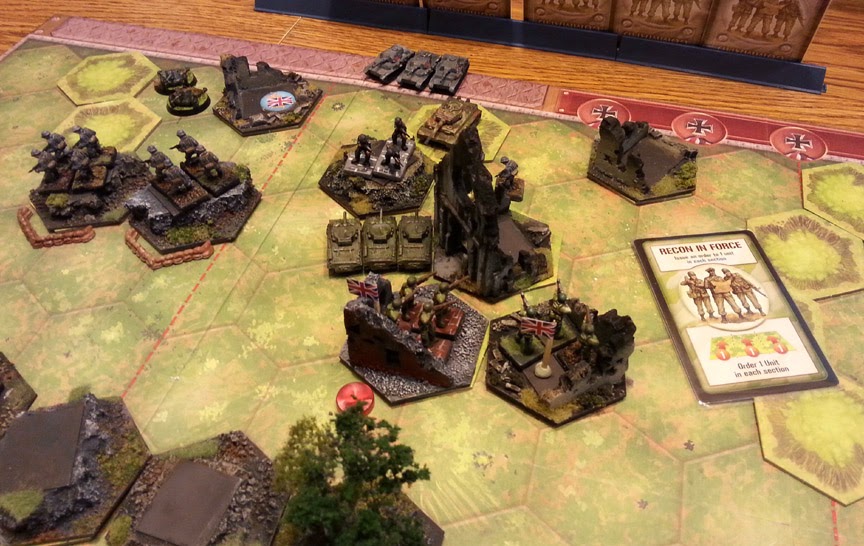 This leaves the German remnants exposed to yet another armored assault, which destroyed the hate Gestapo! 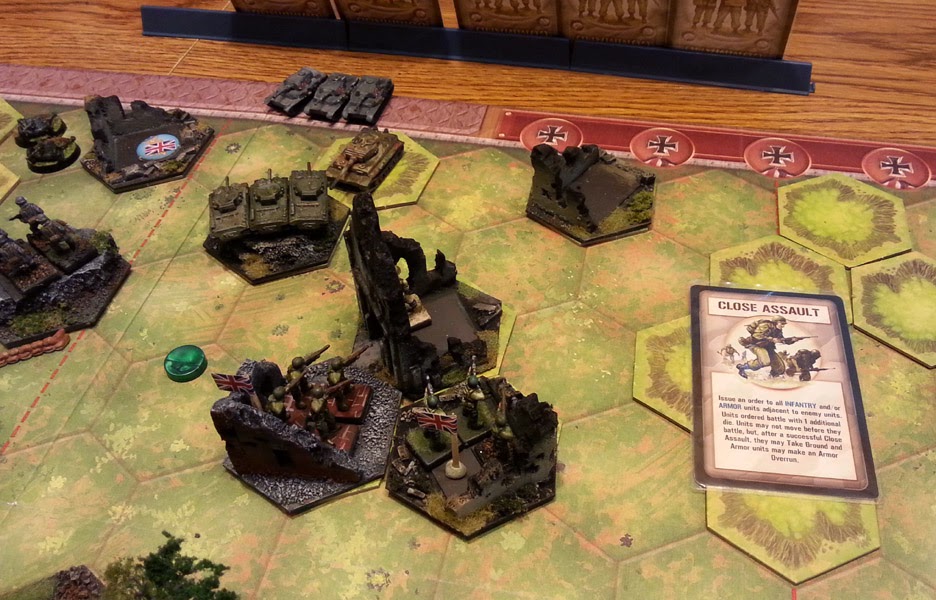 Much blood is shed, but the town is liberated.  For now. 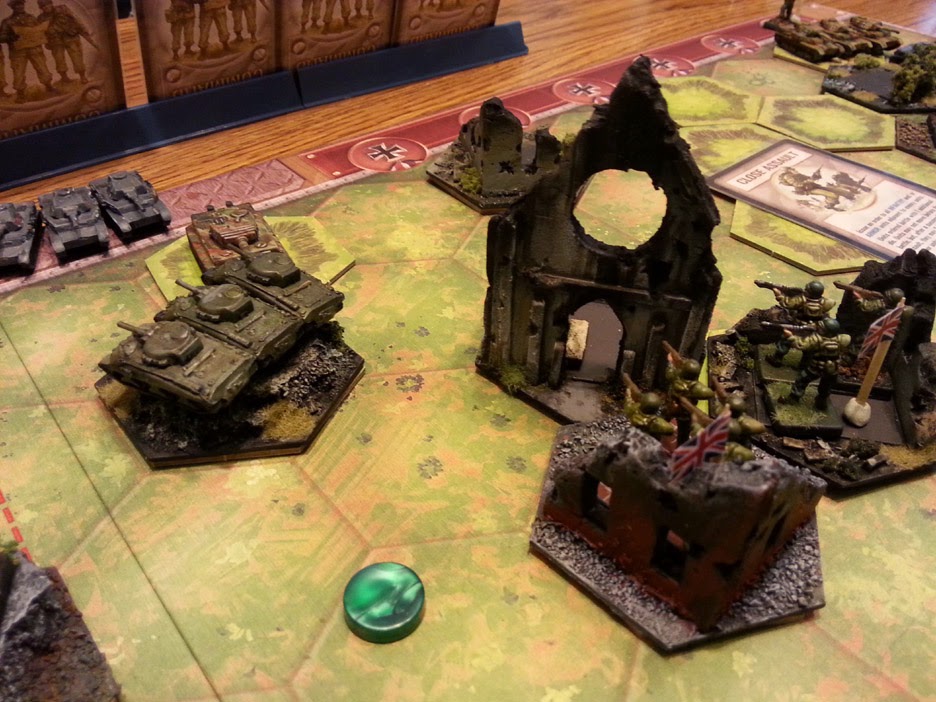 From out of nowhere, the rumble to tank treads heralds the arrival of the reserve Panzer unit.  In their haste, gunners do not take careful aim, and the Shermans survive! 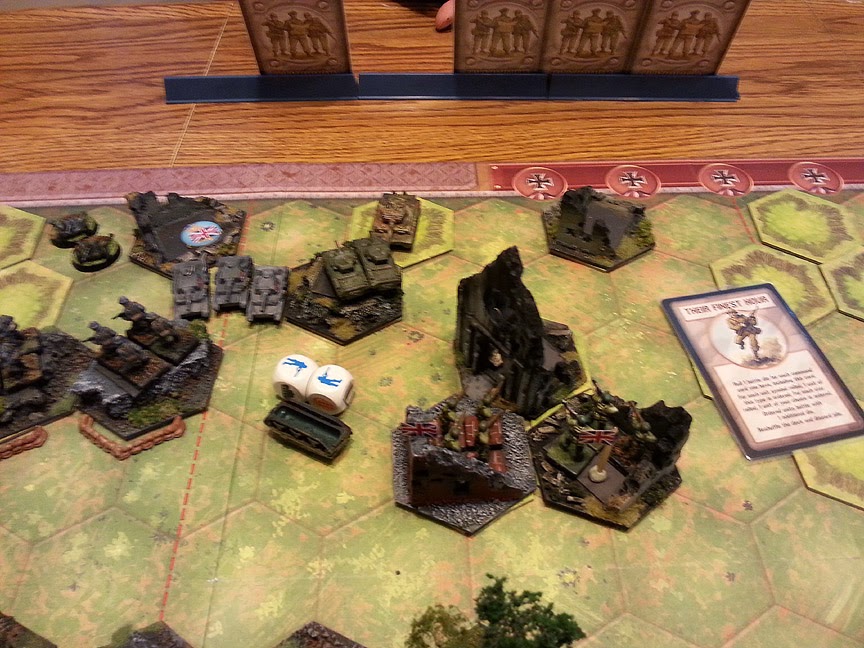 A crack British commando unit is sent on a suicide mission against the artillery unit, which continues to shell the city, killing soldier and civilian alike. 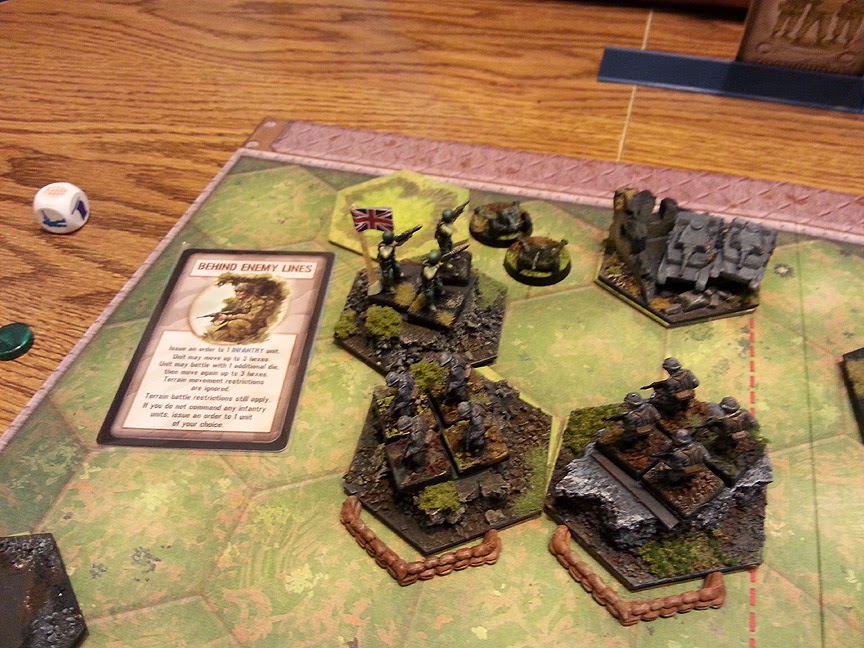 The attack goes sideways, and the survivors are forced to retreat instead of advancing to one more critical objective hex.  Curses! 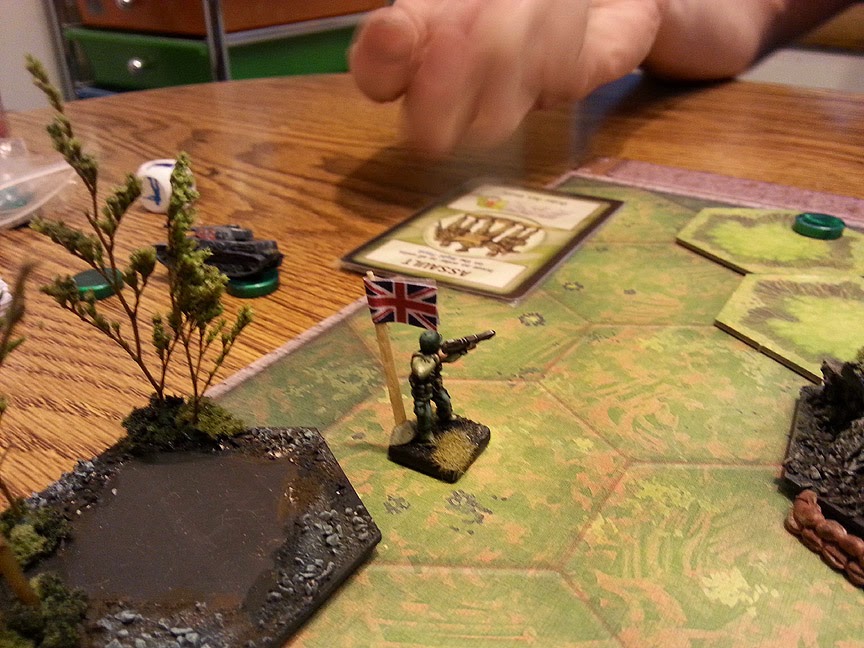 The combined German firepower of Panzer and rifle is too much for the remains of the brave commandos.  Does this spell doom for the fighters in the town?  Can they hold out, with a Tiger tank looming as shells rain from the sky? 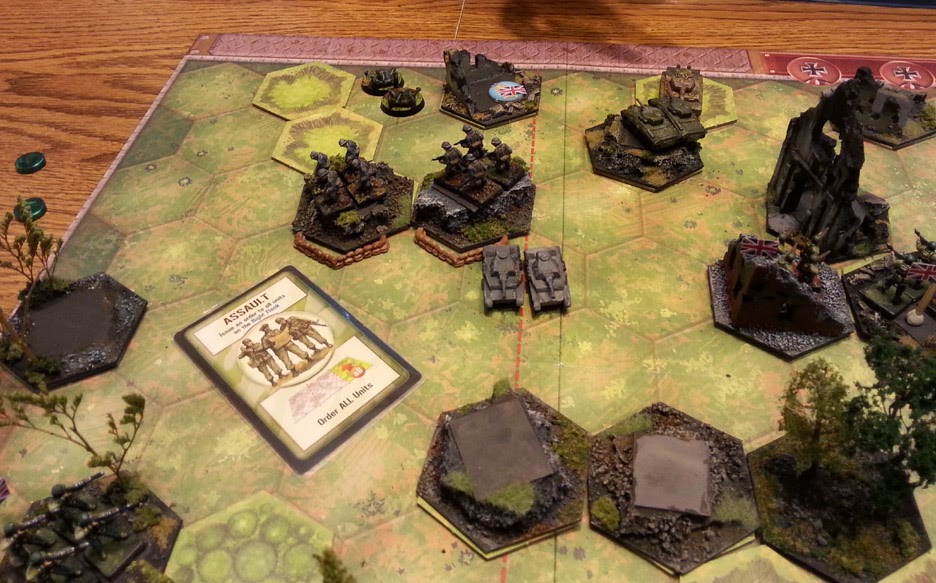