My own Fire and Ice 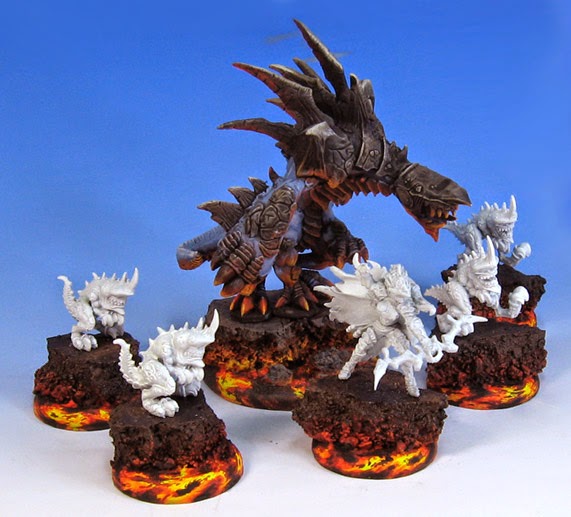 Working with Joe on his Legion of Everblight minis reminded me that I had done something similar with my own starter box a long time ago.  I finally found them!!! 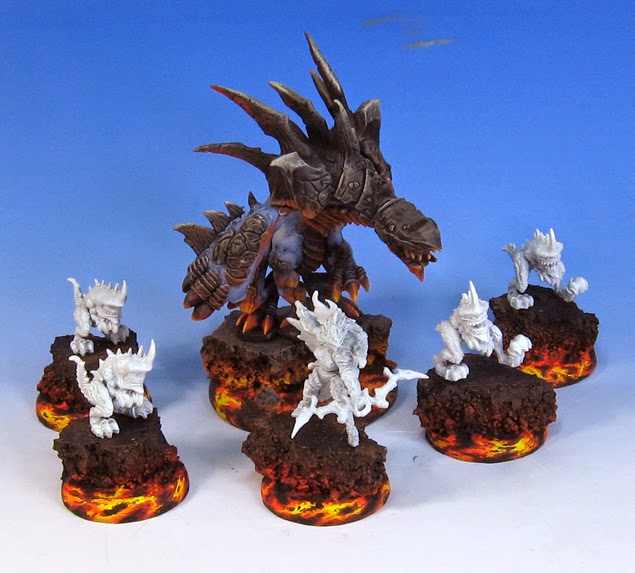 You can see that it is somewhat similar to Joe's Fire and Ice concept... with my carapace more of a normal color.  I still have not had a chance to paint the little beasties yet. :-) 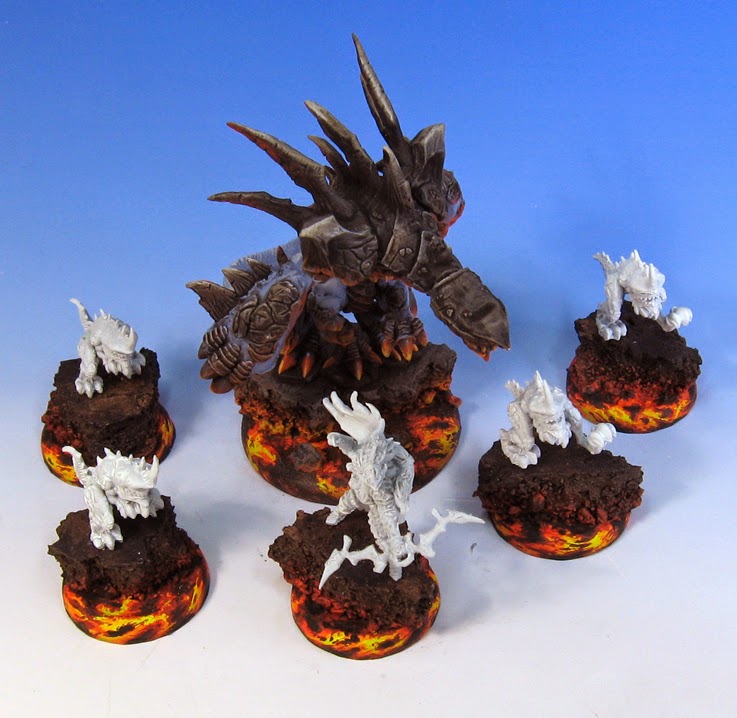 The big critter is still in the shaded basecoat phase.  A long way to go on him yet!

Lots more darks will be added to both the skin and the carapace!  Stay tuned!

Posted by wappellious at 2:46 PM No comments: 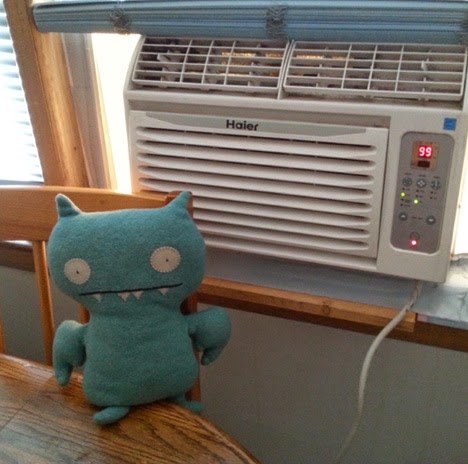 After Ice Bat helped me put in the window air conditioning units, it was time to finish up the Breakout Campaign game #1.

As you may recall, the German forces are attempting to break out, using their elite tank and infantry units.

I executed a pincer move here to take advantage of some positioning, and taking down an infantry unit.  I have started to learn that taking away units makes the higher end late game orders less effective for your opponent.  He can't order what's not there! 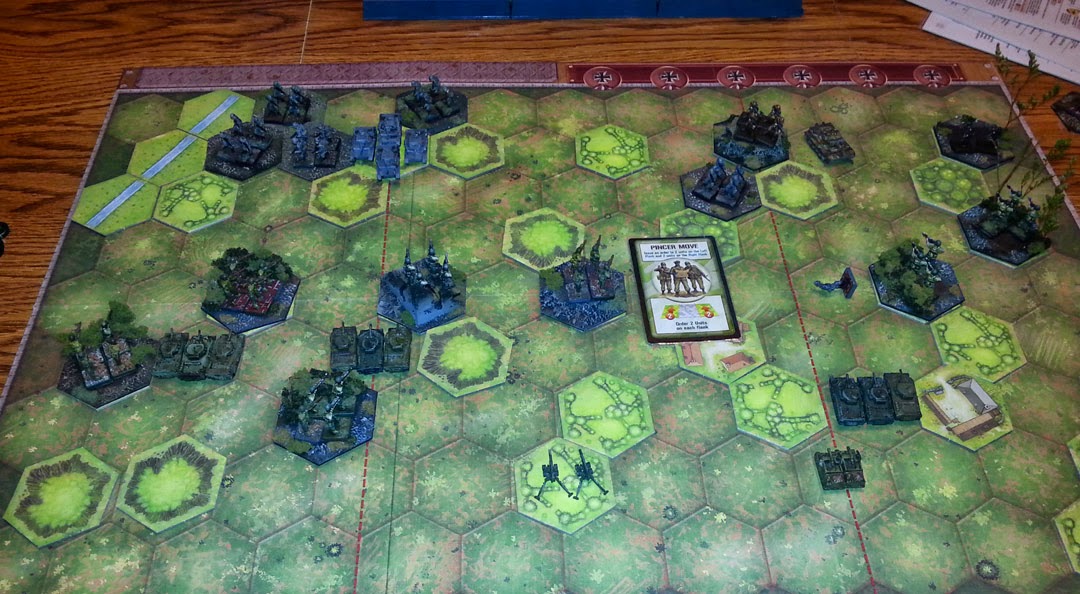 The German reply was to advance in the center, perceiving that there was a lack of units there.  It was my hope to convey this, since the cards in my hand would allow for a double envelopment should that continue. 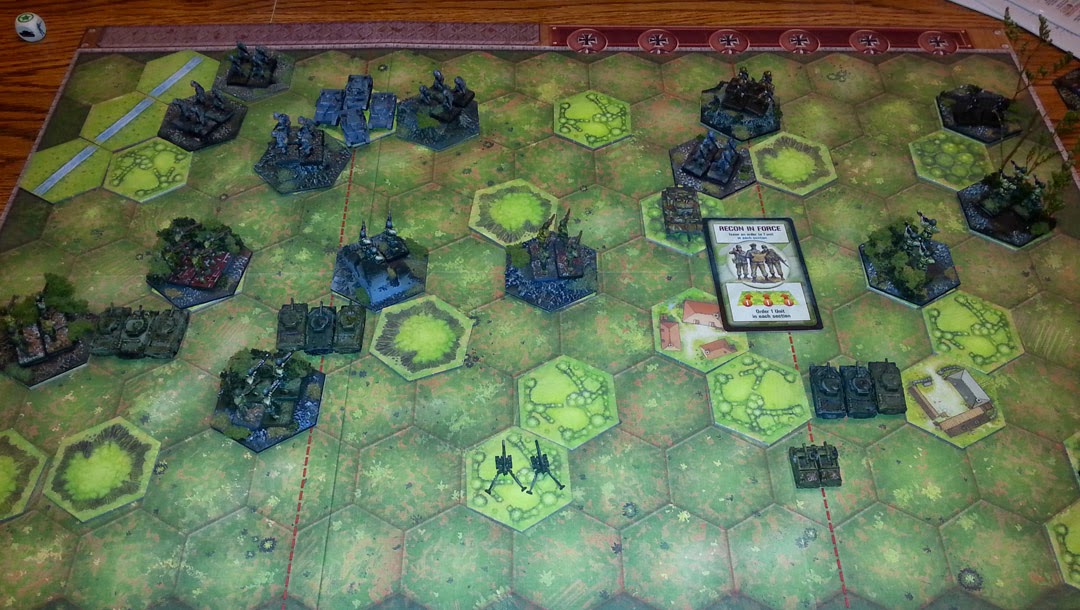 And this was one of those cards.  Activating this many units evenly across the board was going to be devastating for the Axis. 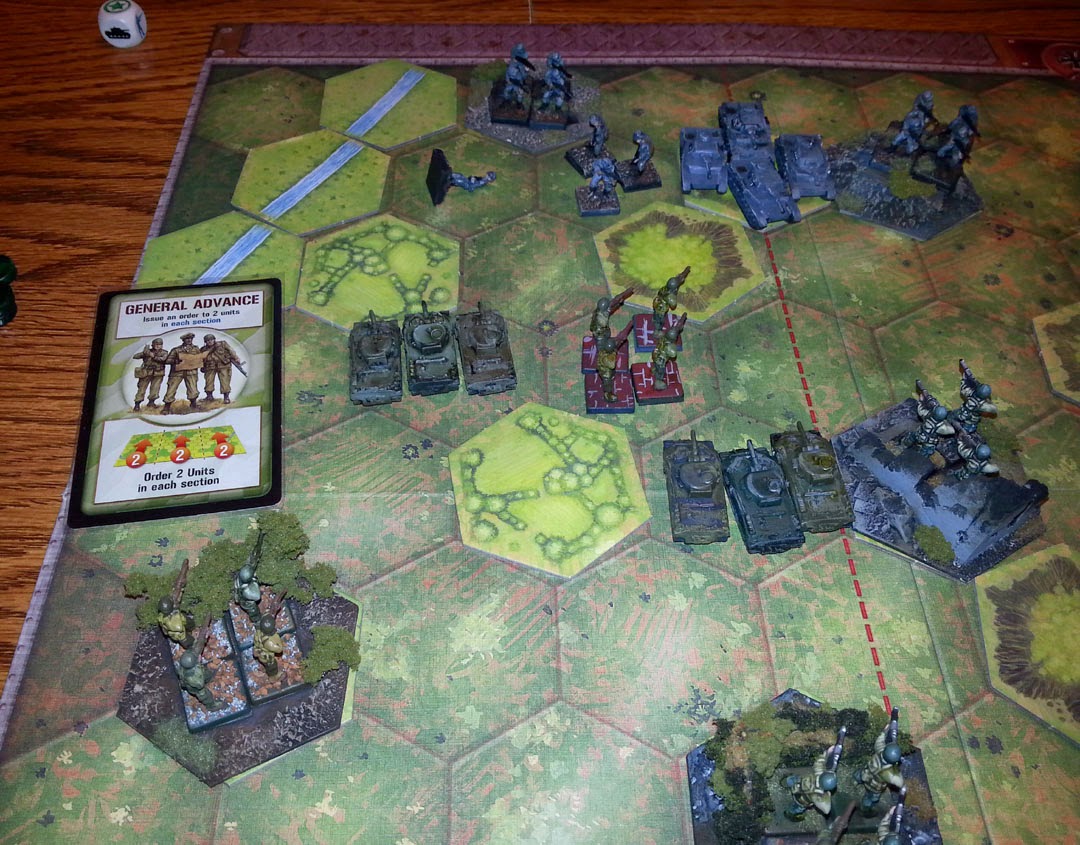 You can see the envelopment in progress... 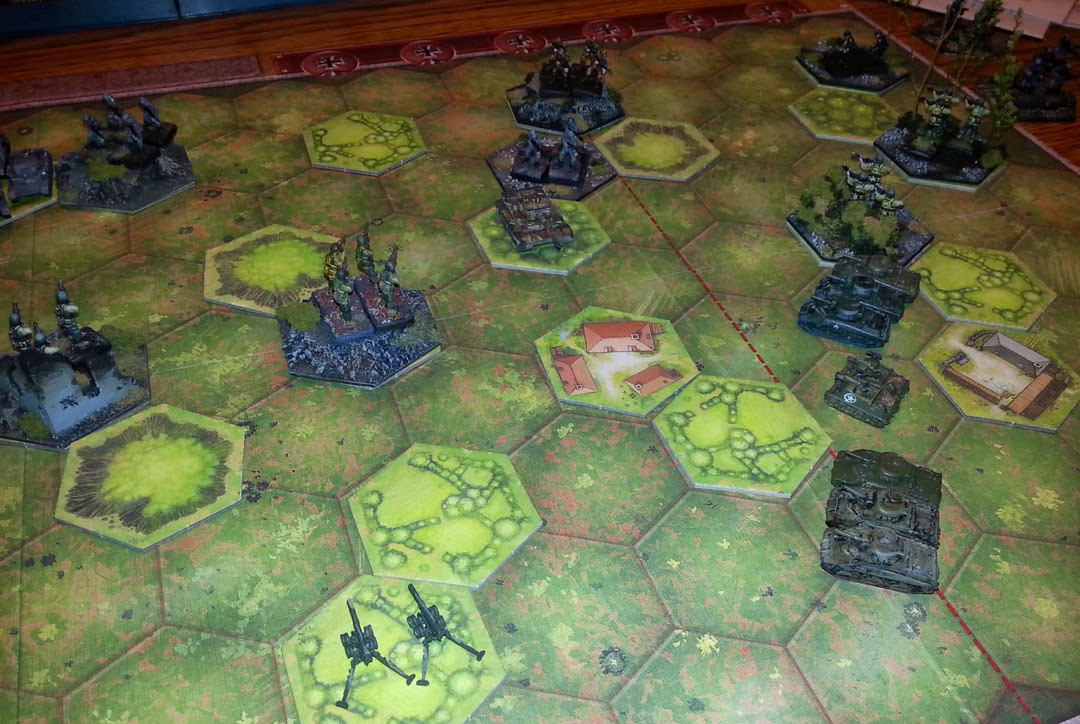 This was a rather dramatic turn.  Remember the Ambush card?  Well, the perfect situation arose when the Germans attacked one of the American units close up.  However, my rolls barely affected him, and the grey clad butchers wiped out the unit on the hill!

Sometimes even the perfect set up can not go your way at all. 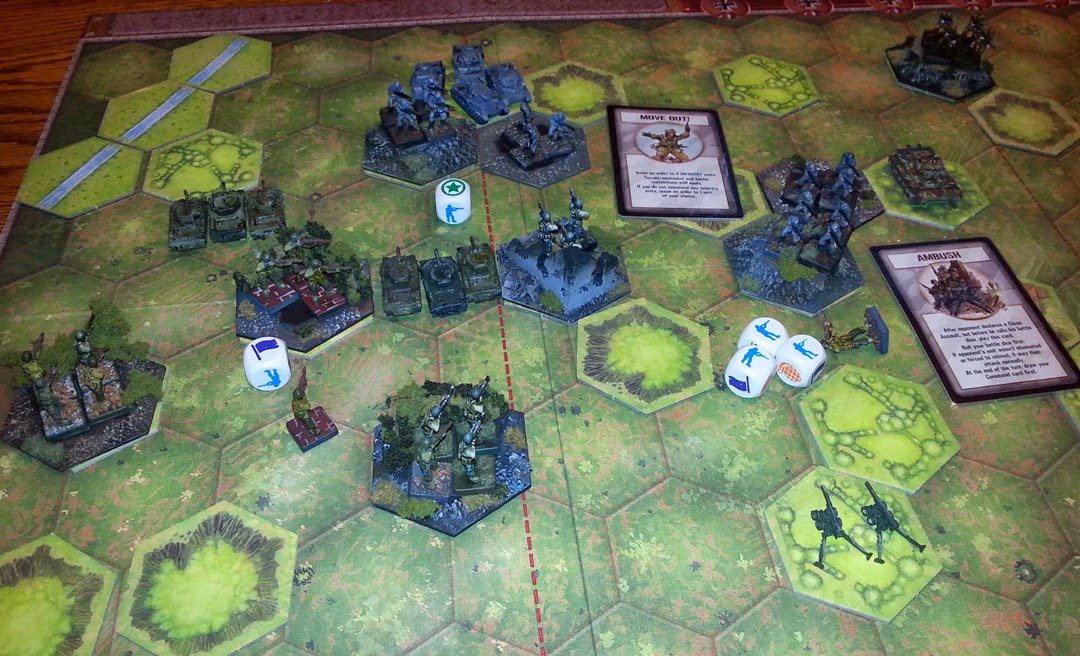 I was not terribly worried, however, since I had some big time cards to play, such as this armored assault!  I had been moving those units into position most of the game to pounce on this advantage, which meant another elite infantry unit was destroyed! 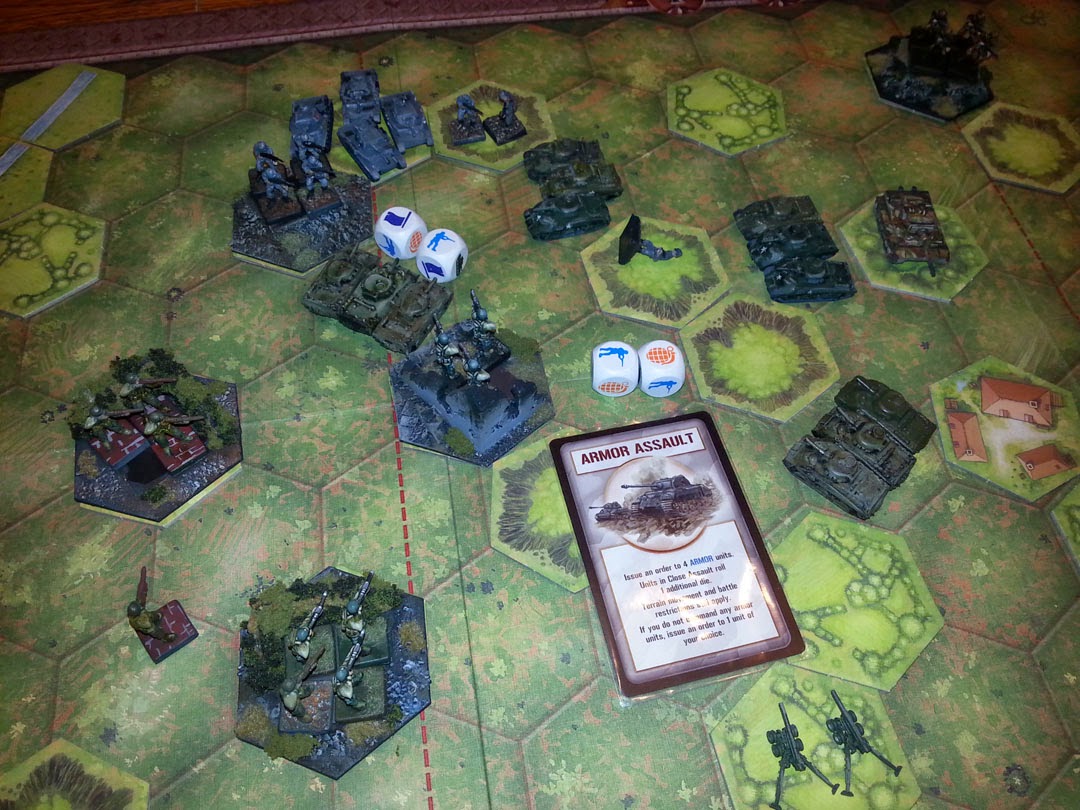 Ground under the treads of the attacking Shermans, the "Unit denial" program was well under way. 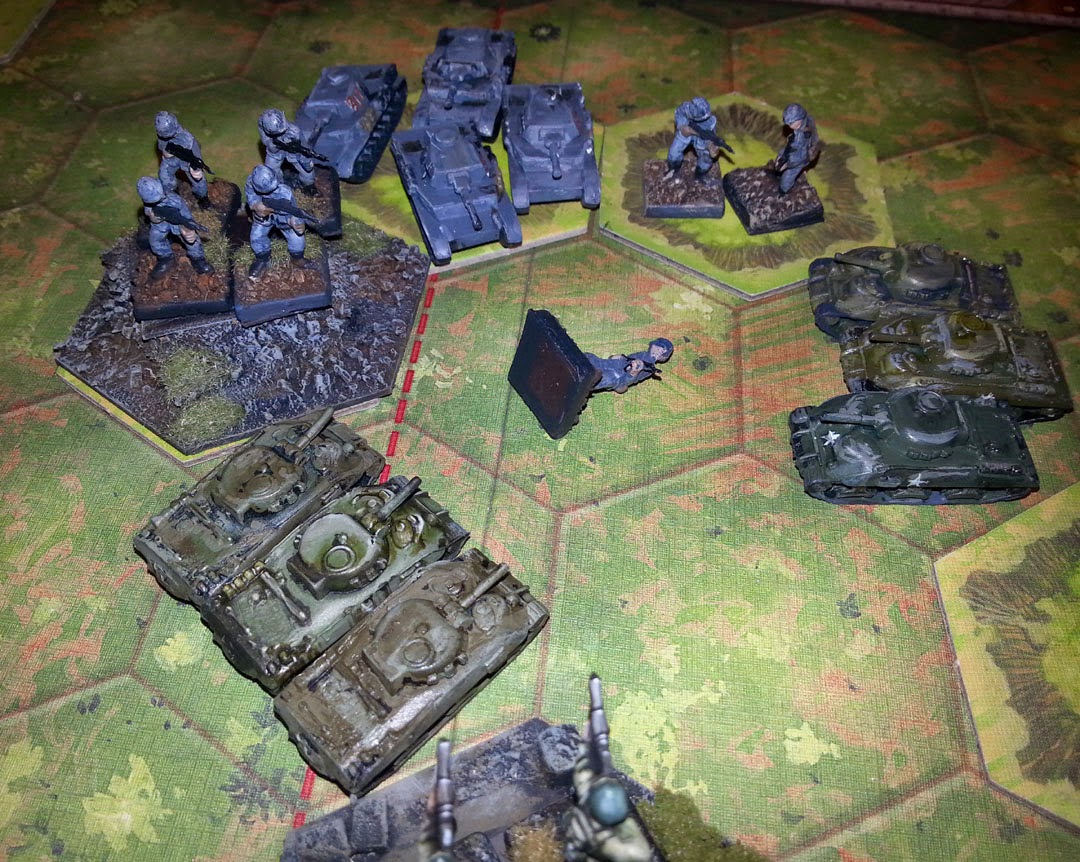 The Axis could only respond with a recon card, in the hopes of getting something better with the 2 new draws into their hand. 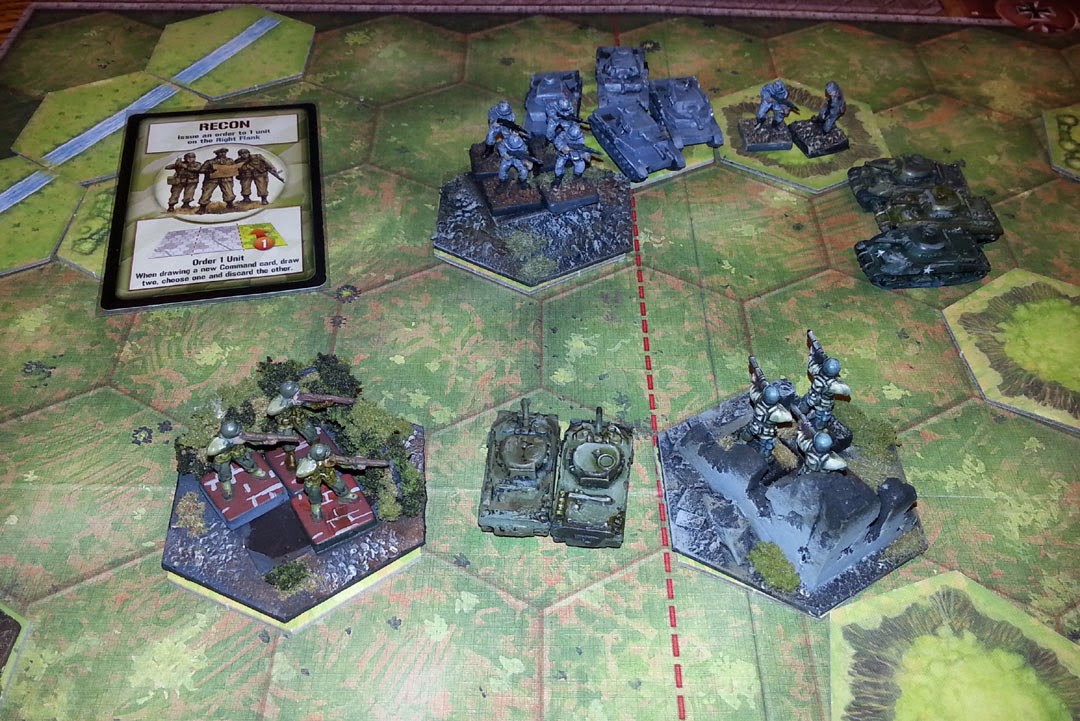 Another devastating order which allowed for the attack in the center to be sustained.  I have to say, this game saw the most repeated action by any armor units than I have yet to observe.

Also, when a tank unit wins in combat against an infantry unit, they can follow in, and either attack that unit once more, or go after another target.

I chose to add one more dead platoon to the Unit Denial tactic. 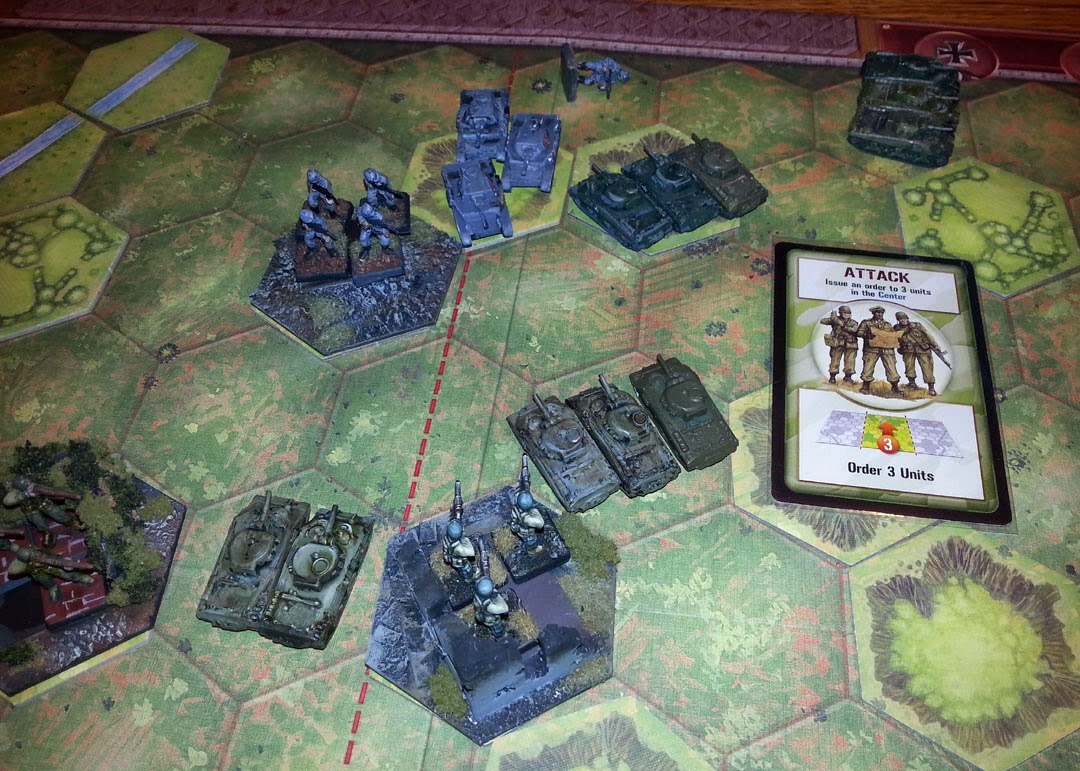 This is why such a program is very helpful.  It is late in the game, and the Germans have what is ordinarily a fantastic card... the Direct from HQ.

However, since so many of their units are either destroyed, damaged or scattered, the impact is greatly reduced.

In one last show of suicidal gallantry for the Fatherland, Whittman advances against what he believes is a unit of fragile Sherman tanks.  He believes he can cut through them on his own, and break through to the Allied rear! 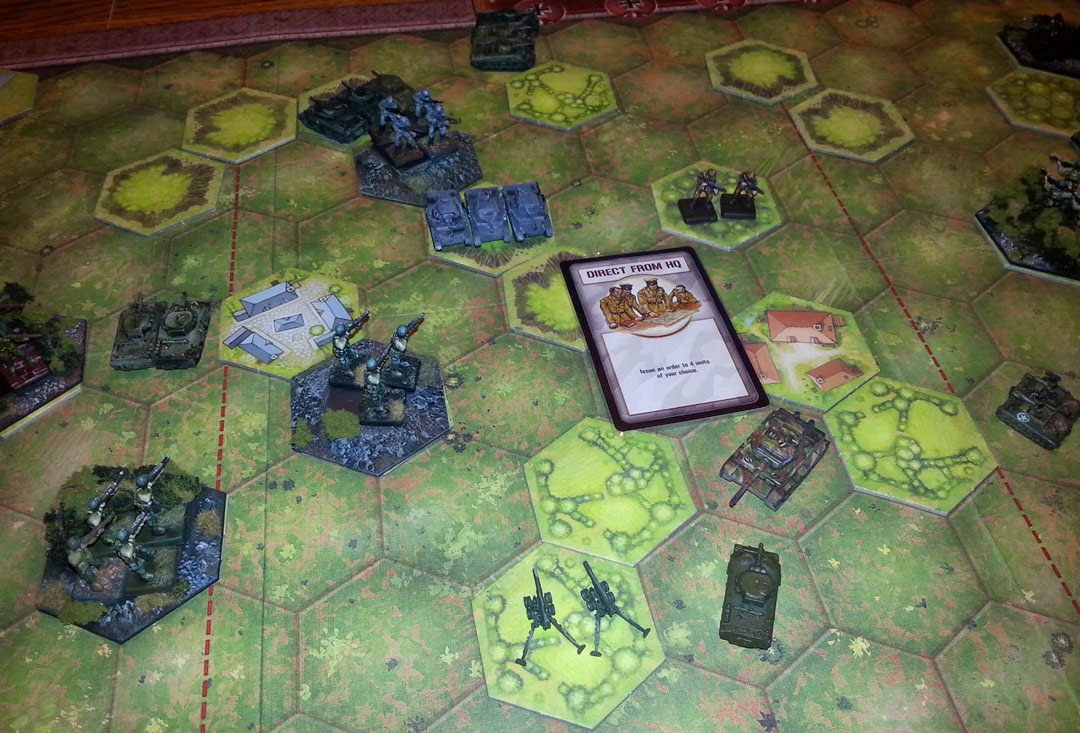 What he did not know, however, is that one of those 'helpless' tanks was in fact, a Firefly.  Taking careful aim, even the monster Tiger tank fell prey to its enhanced firepower.

The Nazi scourge had been dealt with at last!  The tank ace lived no more. 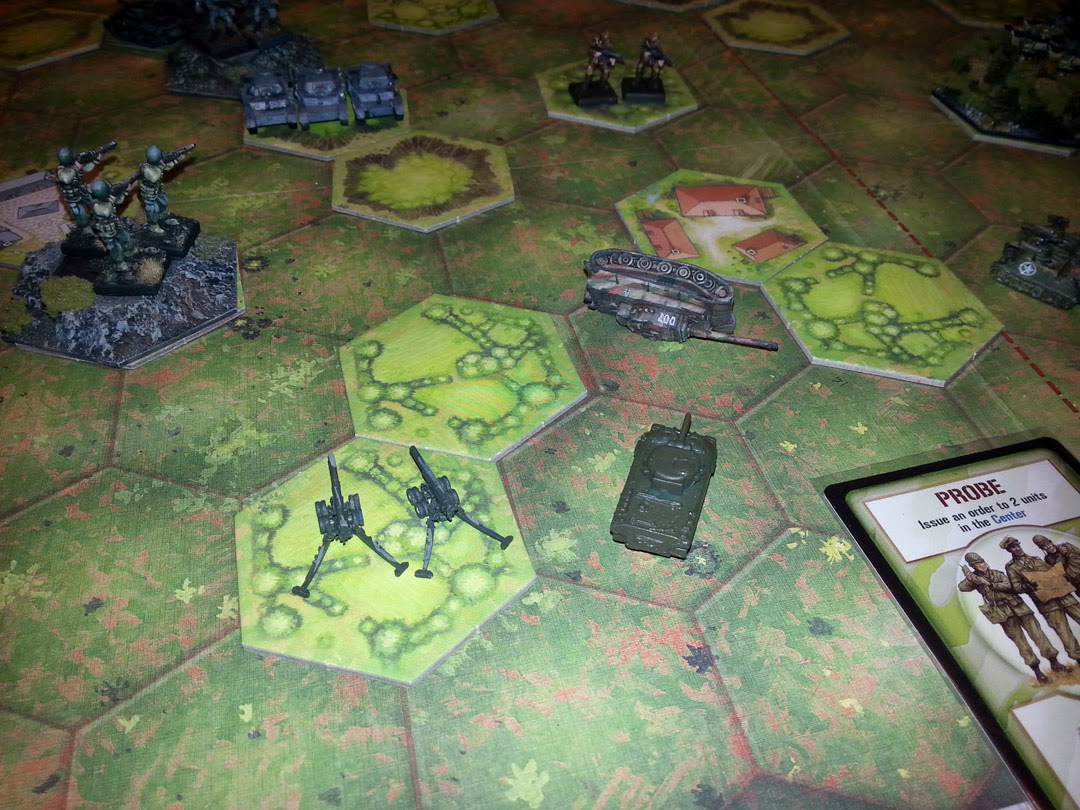 The campaign chart after game one... a stunning American victory.  This was doubly bad for the Germans, since the Allies would be getting extra reinforcements the next game, and have more opportunities to damage the German force pre game. 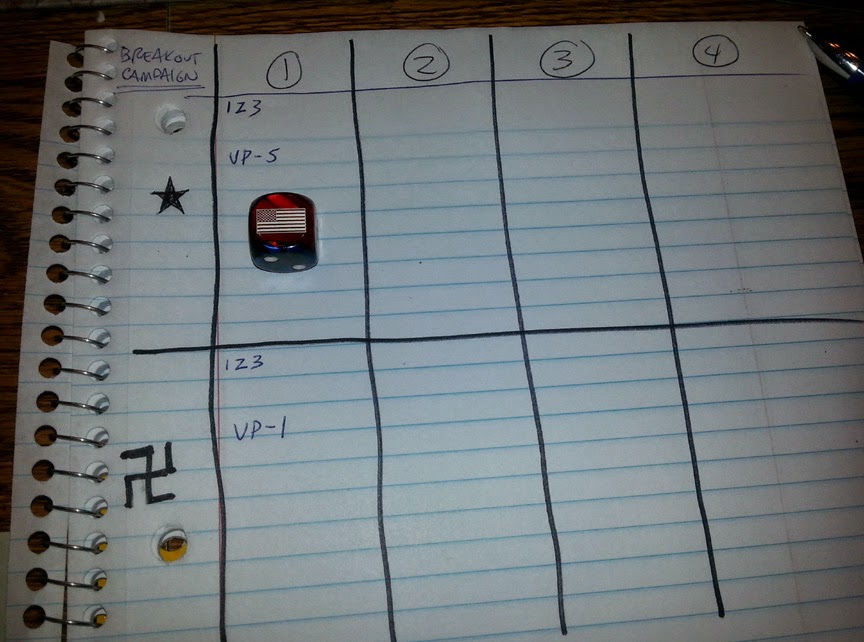 More on the next battle later.  In the meantime, Ice Bat chills out in the kitchen!! 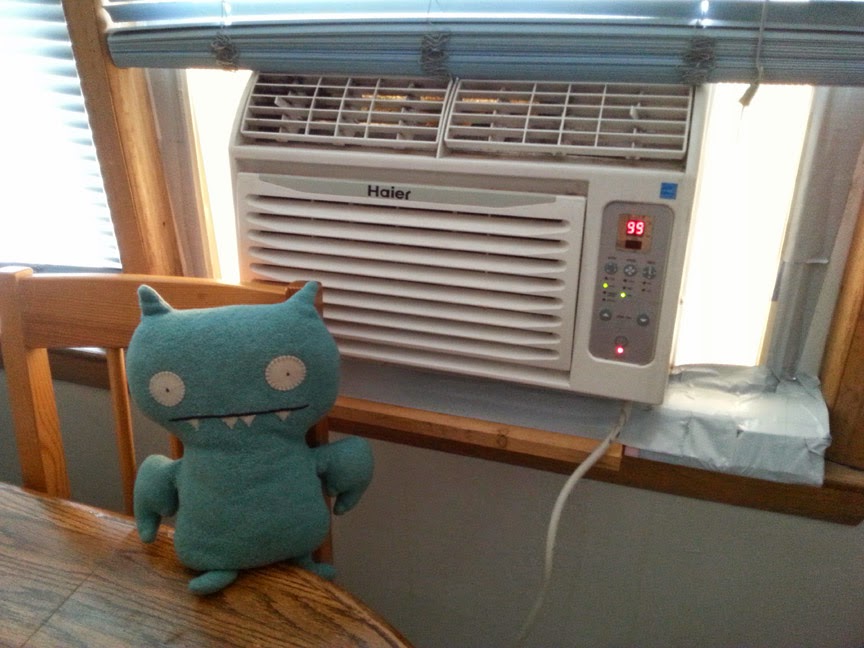 Posted by wappellious at 2:59 AM No comments: