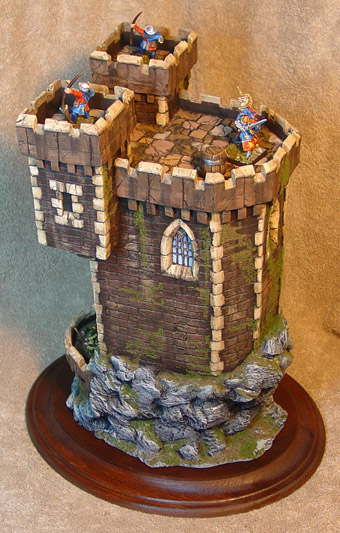 Here we go!  I am pretty sure that most of you have already seen the images of the unpainted guard tower.  For those who have not, this diorama was made entirely from sculpey.  Most of the textures were carved in after it had been baked.

Now, however, it is time for some images of the painting! 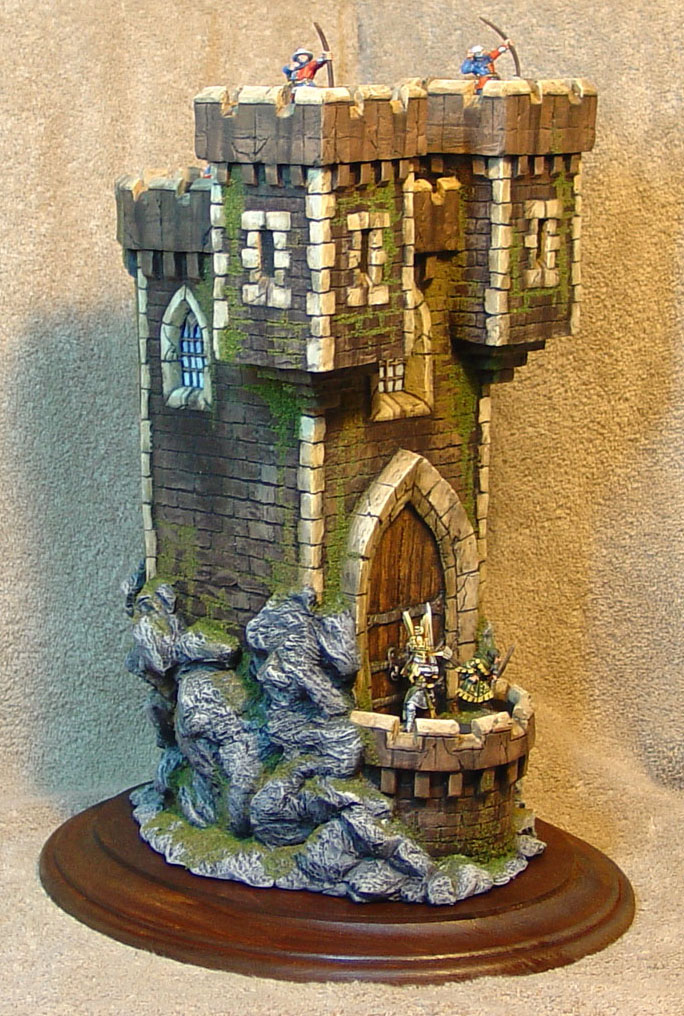 Painting this proved to be almost as difficult as sculpting it.  It was not easy to reach many of the areas, and it was so heavy, I could not maneuver it very easily to get at the nooks and crannies. 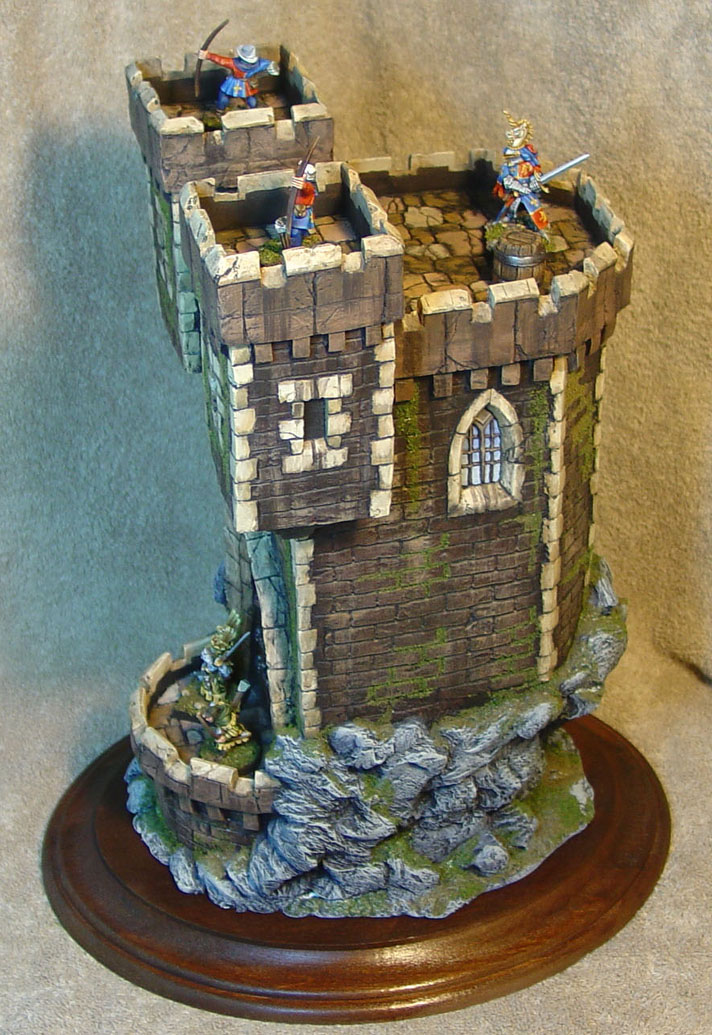 I always liked the look of the castles that had the lighter colored "trim" stones.  I also tried to make the flagstones on the roof many different shades. 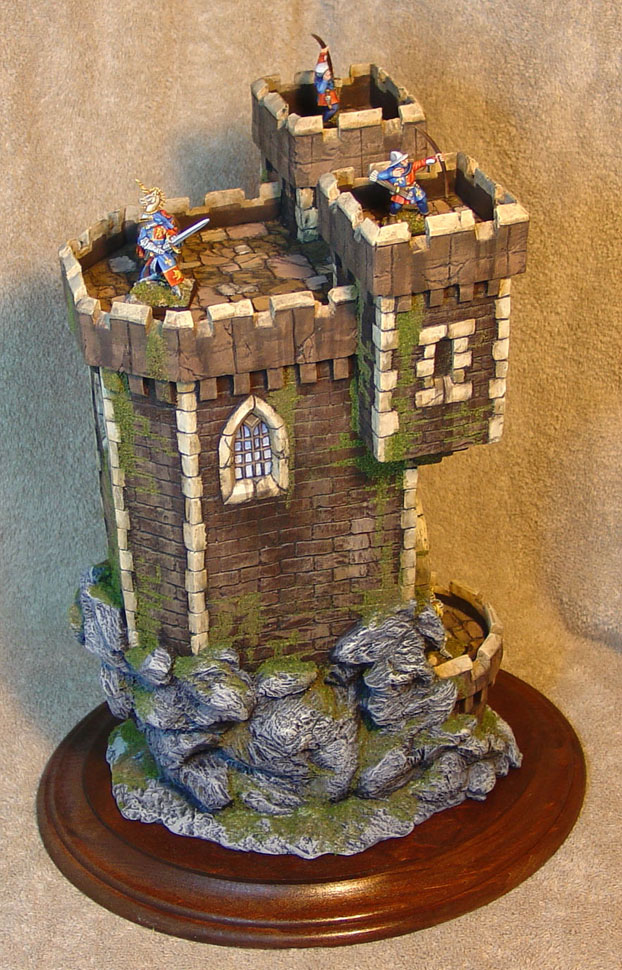 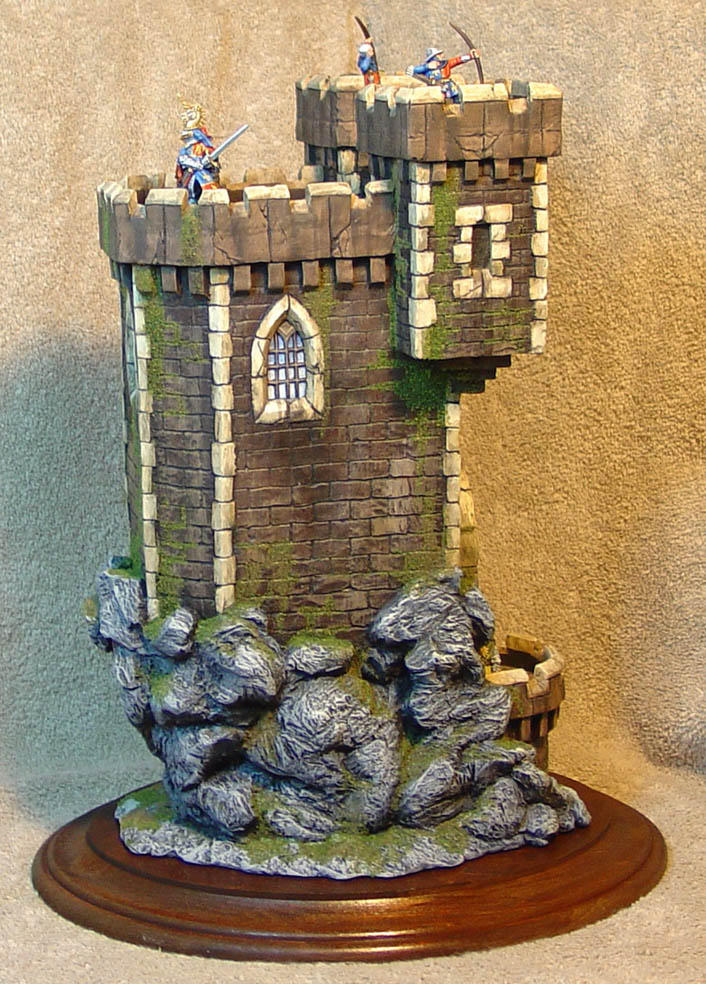 Basic flock was used to get some mossy feel to the walls and the rocks. 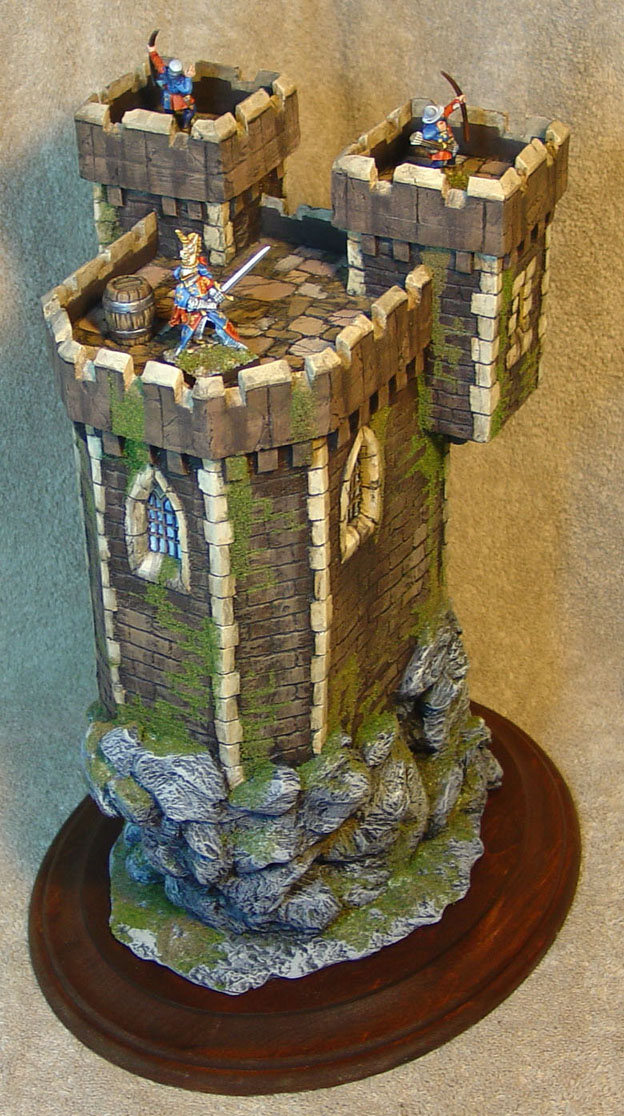 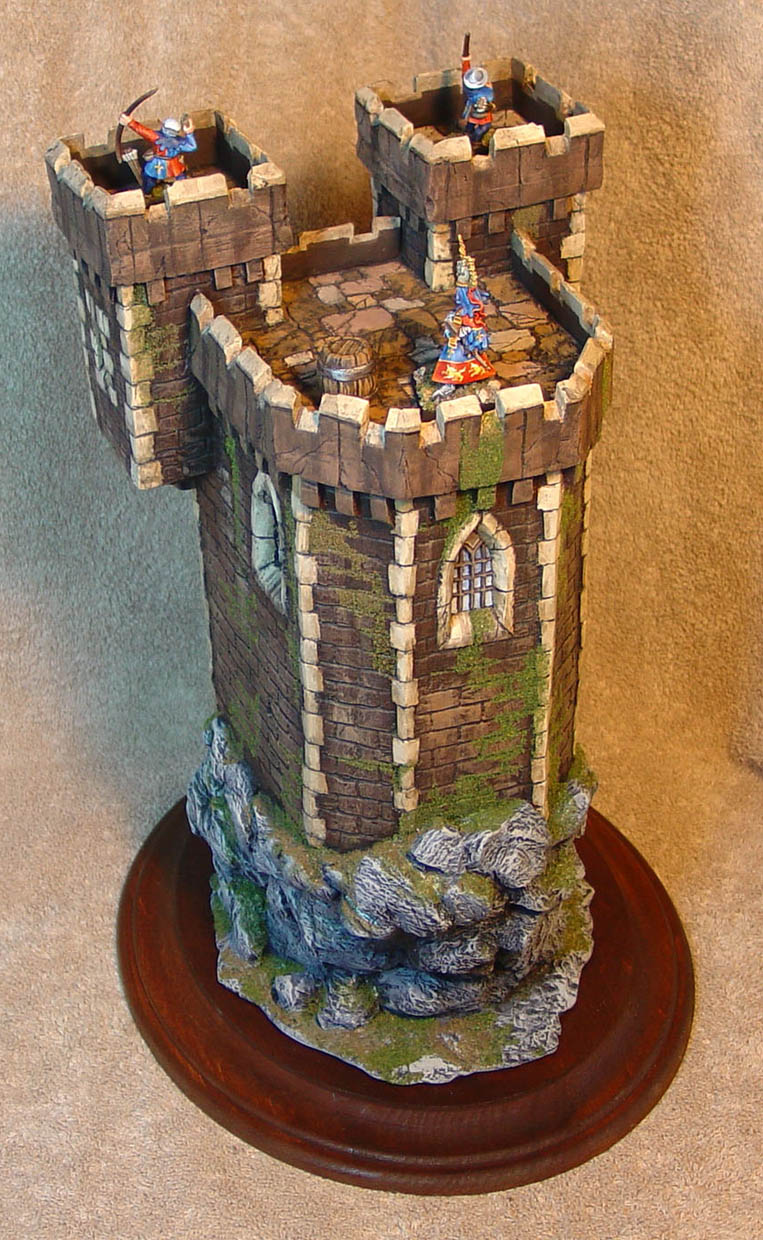 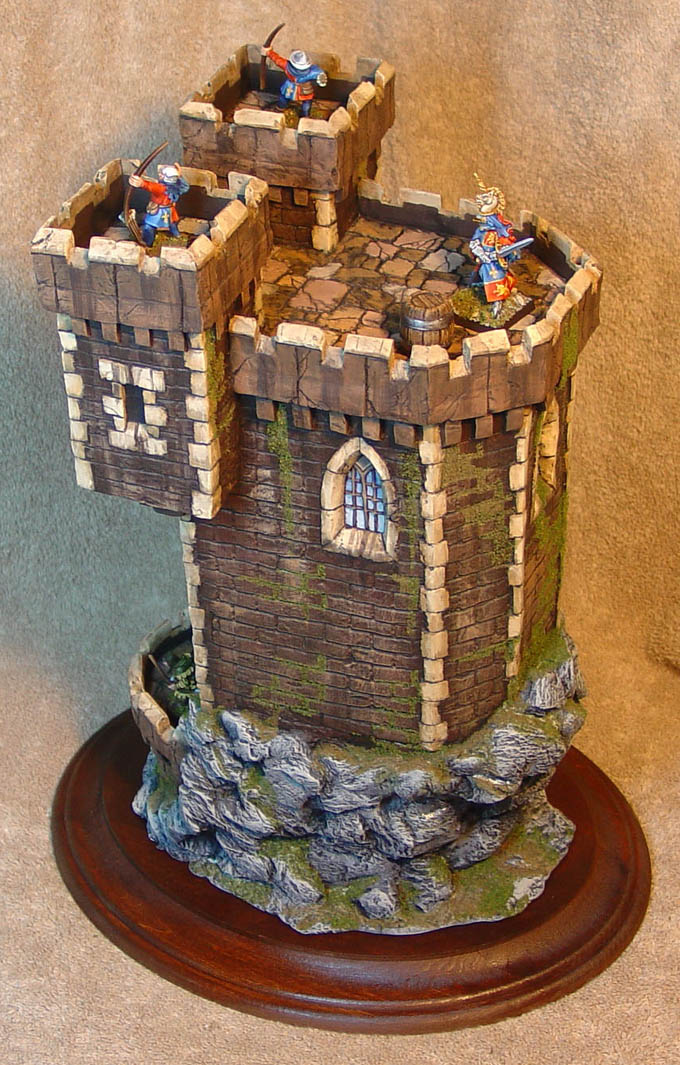 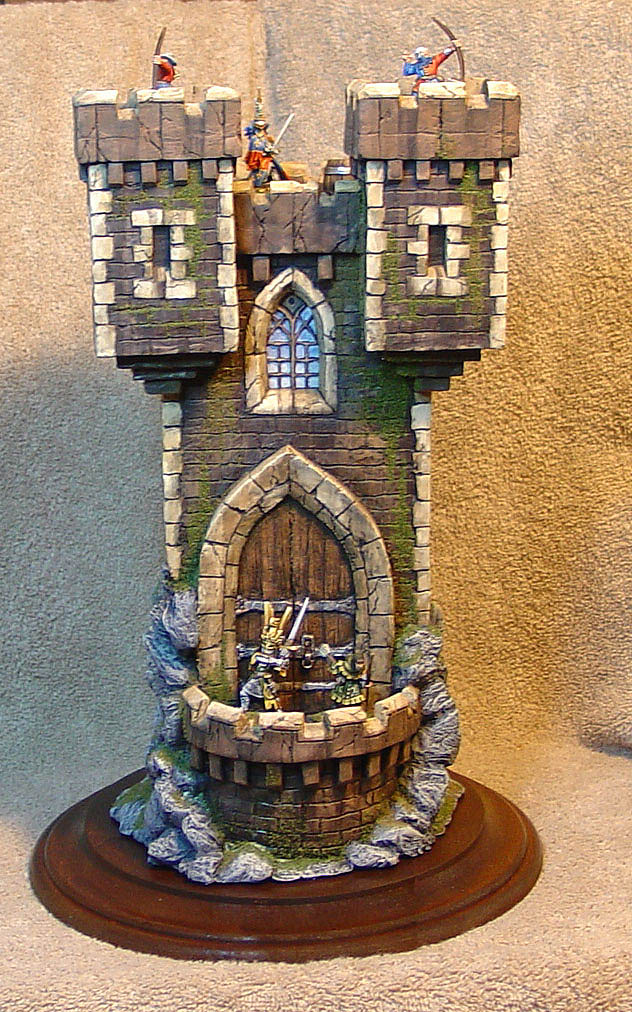 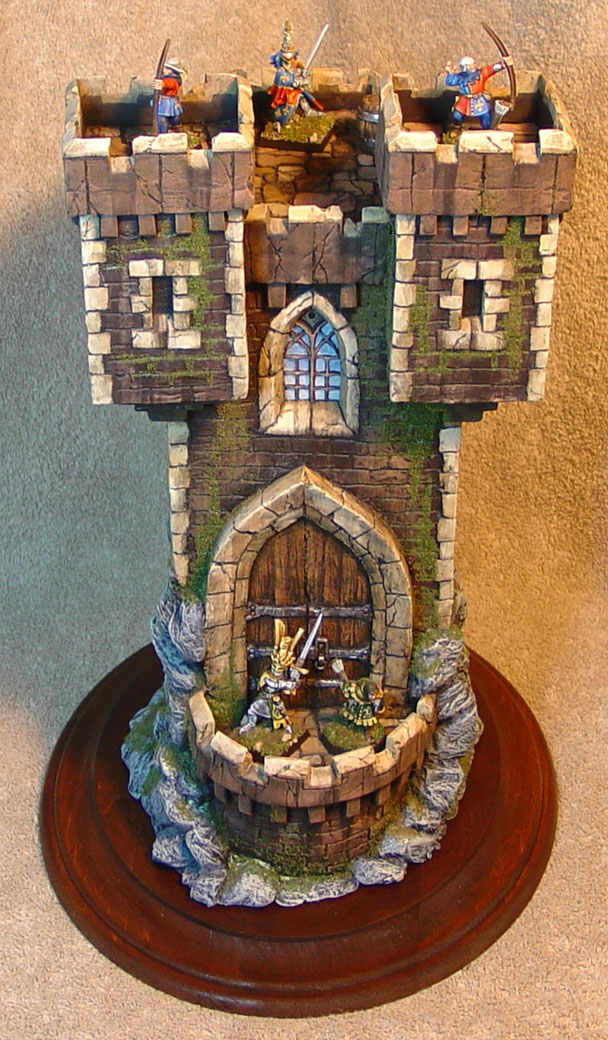 I will be doing one more post that has some more pictures of the guard tower, and the miniatures as well.  Stay tuned!!! 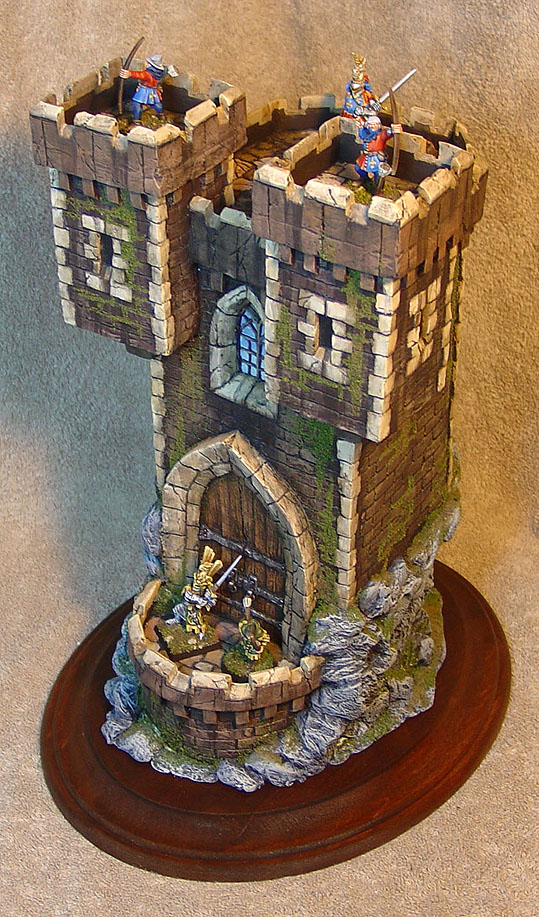 Just when you thought it was safe... 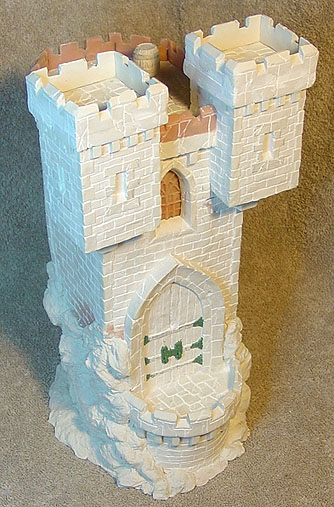 So, you thought there were no more dioramas!  Not so!

This piece was part of the 2004: the Year of Dioramas.

This giant tower was made entirely from sculpey.  It is hollow on the inside, but it still weighs several pounds. 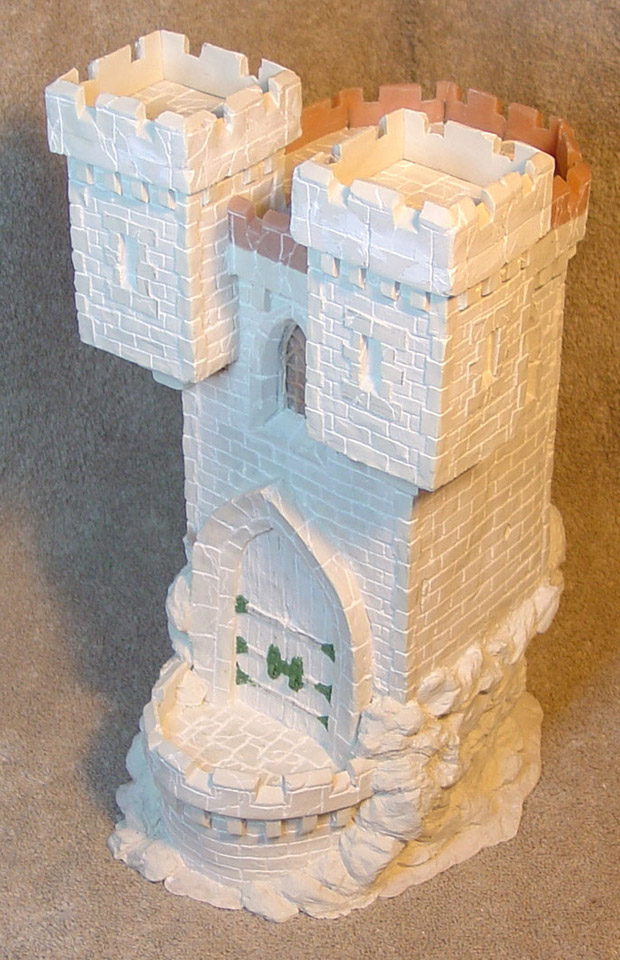 It had to be baked in multiple parts.  I made the bottom section first, and baked that.  I extended the tower section upwards and baked it again. 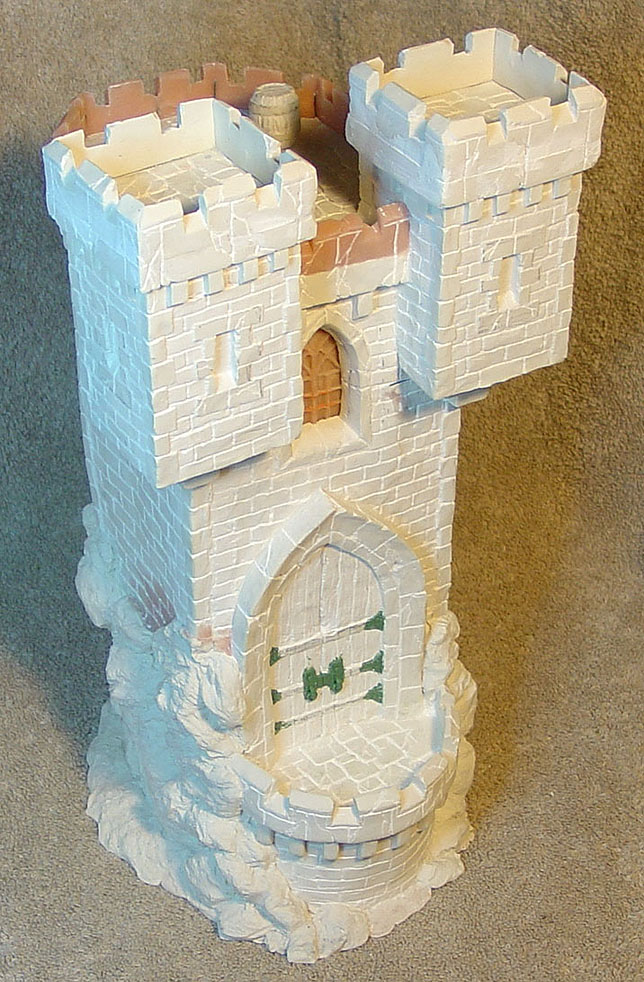 The two sentry posts on top had to be sculpted separately and baked, since it was going to be too tall for the oven! 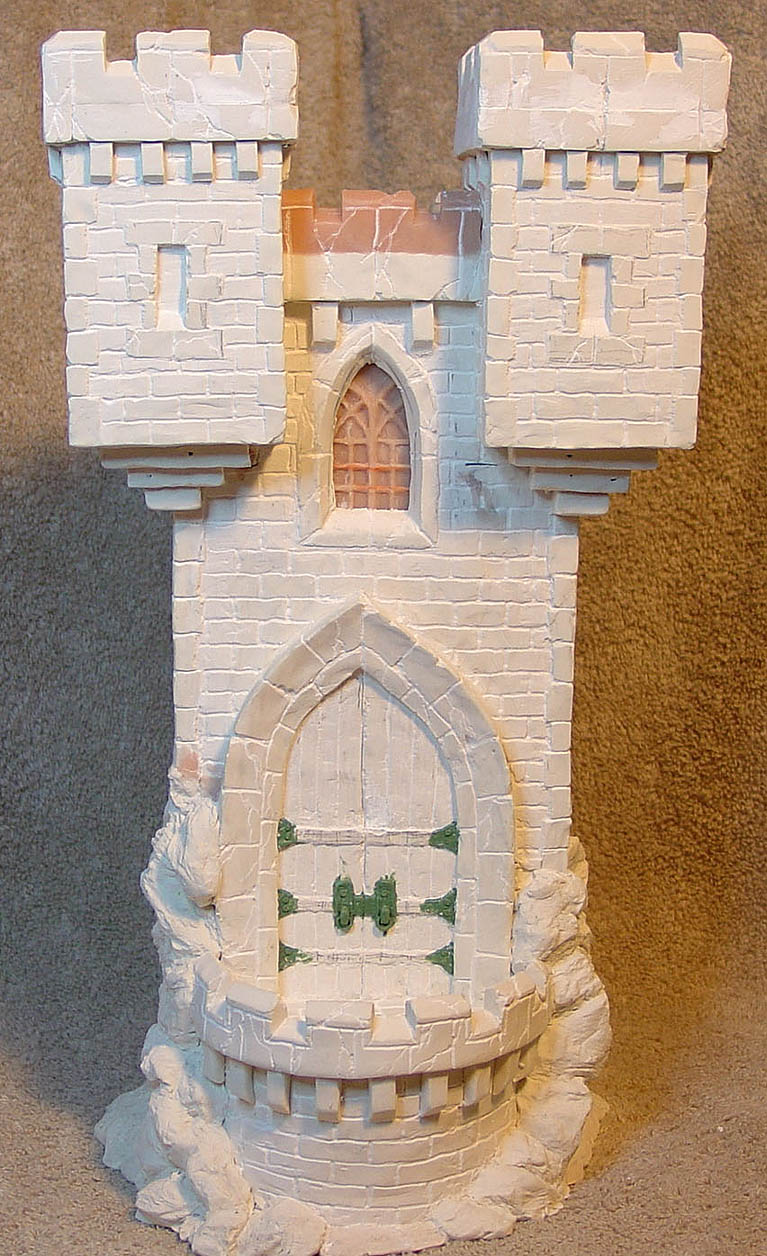 Once those were baked and cooled, I glued them onto the tower.  The windows were tricky, as I had to sculpt those as well.  I wish I had made some casts of those!  They would have come in very handy since then... 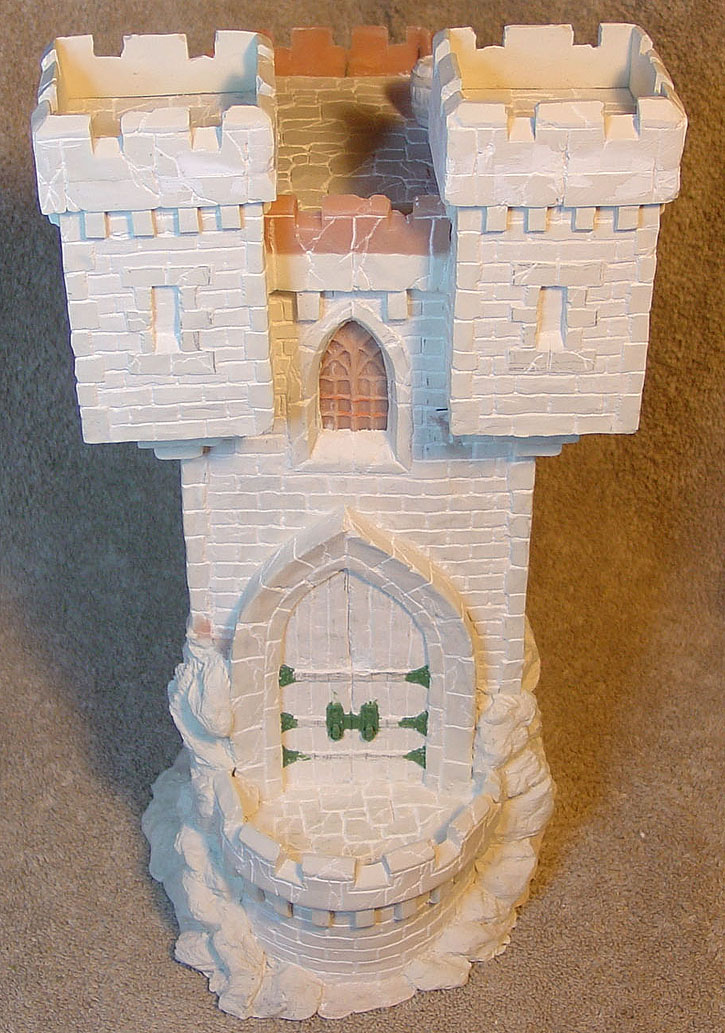 All of the stone textures you see were carved on once it had been baked.  That is a very time consuming and difficult process, but it is well worth it.  Unlike some of my other non sculpey techniques for creating those textures, this one lets me get a great deal of precision and depth. 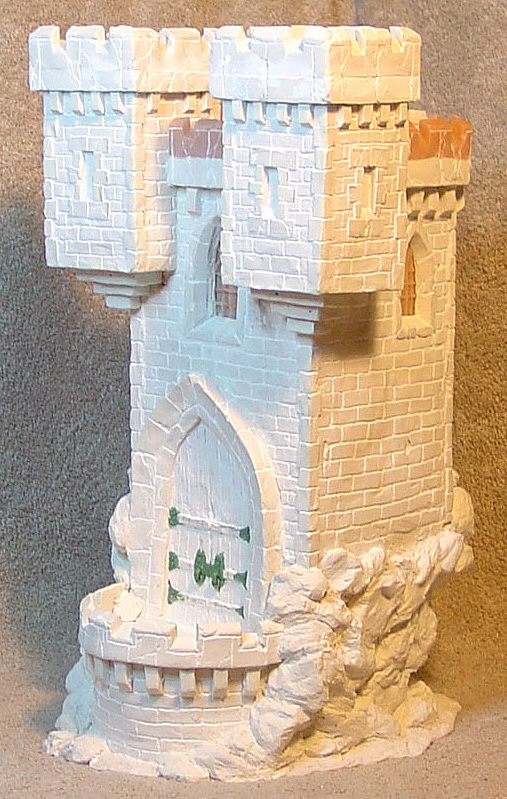 First, it lets me create the variety of surfaces, such as the flagstones on the roof, the wall stones, the corner stones, and even the wood grain on the door and the barrel, which was also made from sculpey. 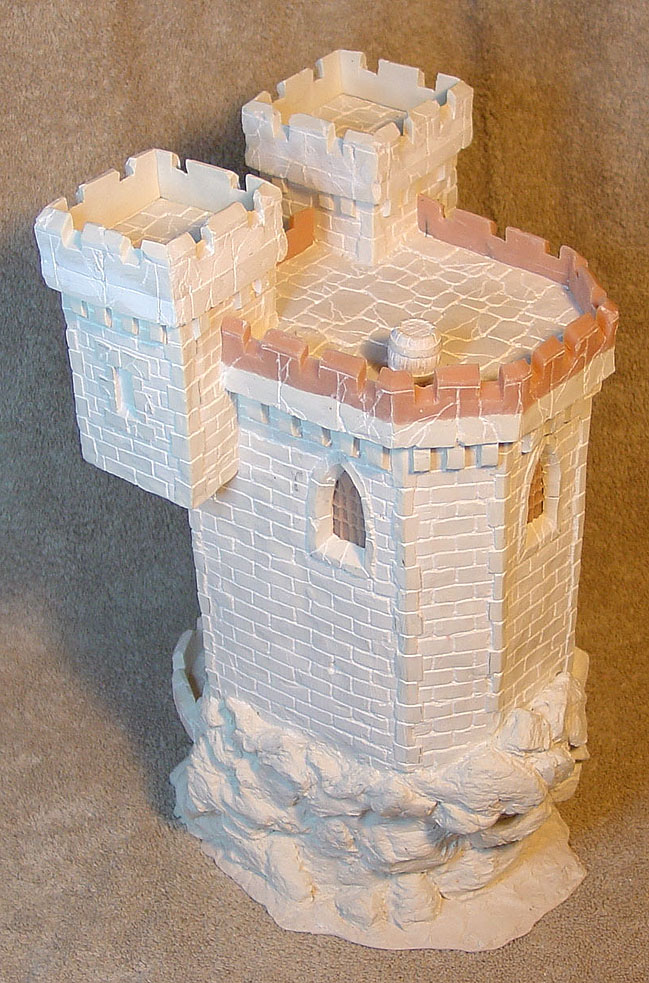 The rock texture on the base was created by pressing real rocks into the unbaked sculpey.  That is a fantastic technique that Cathy invented.  It has come in very handy, even recently when she made her steampunk bases for DragonForge. 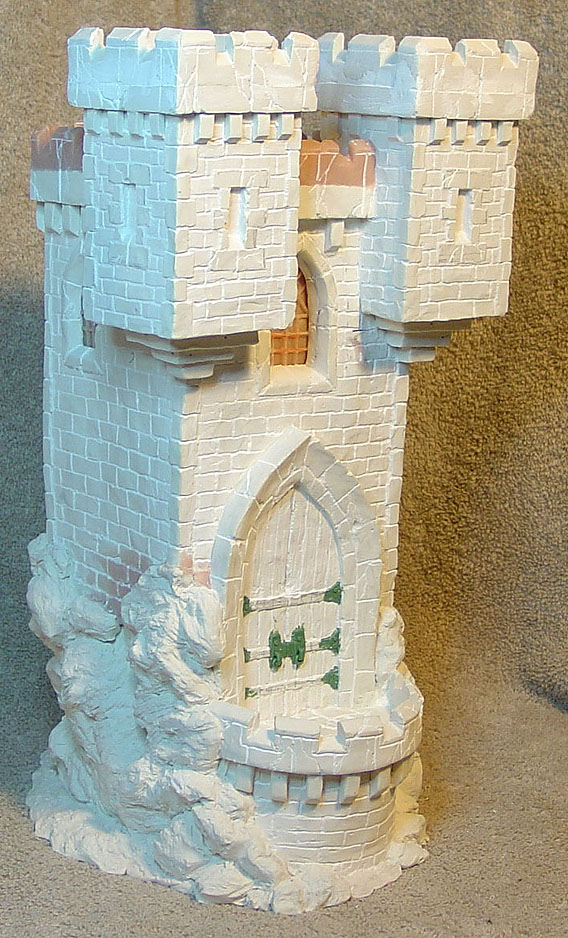 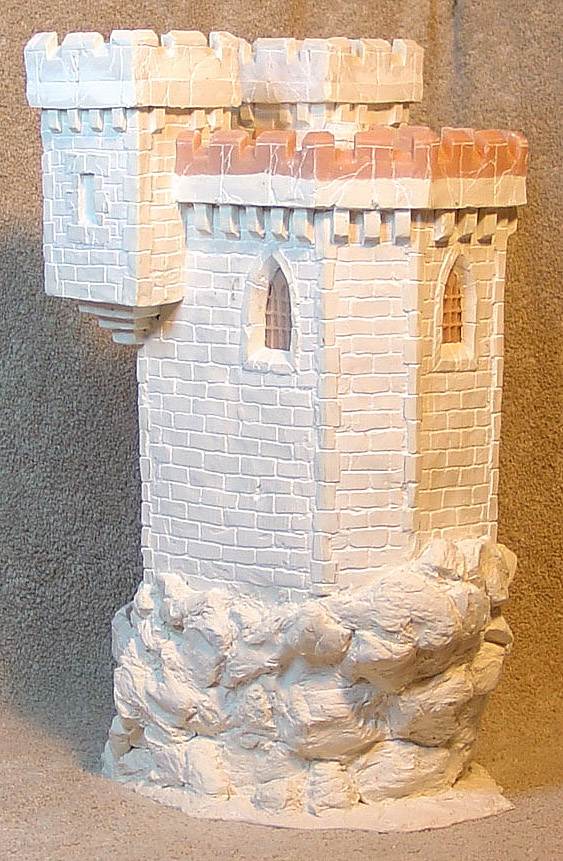 I have a lot of pics of the painted versions of this, so stay tuned!!! 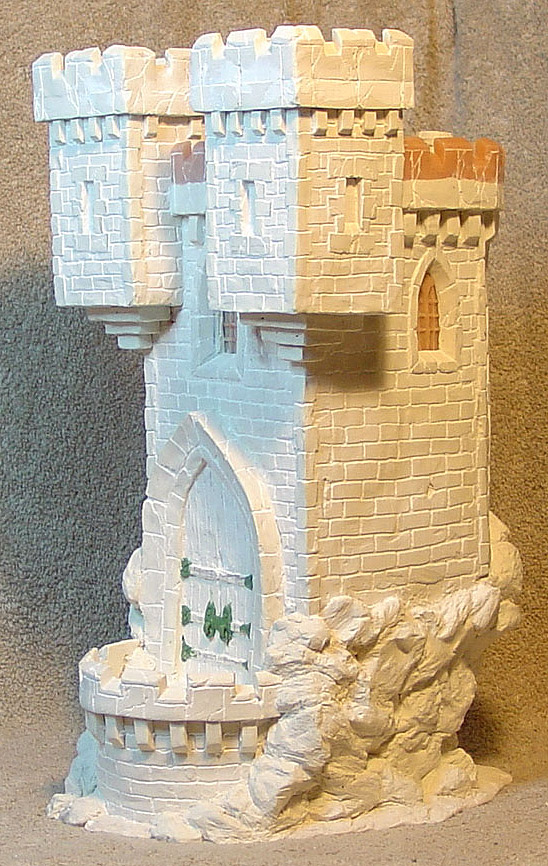 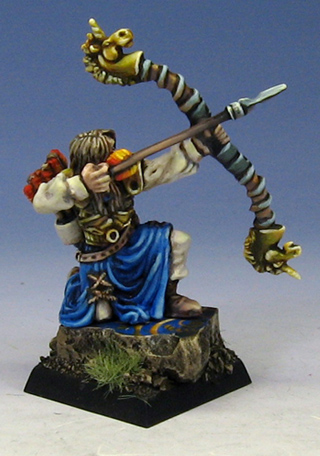 Here are some High Elf Archers from Gamezone that I painted last year.  The bows are certainly different...

It was interesting that all of them were crouched down, instead of all standing up, like usual. 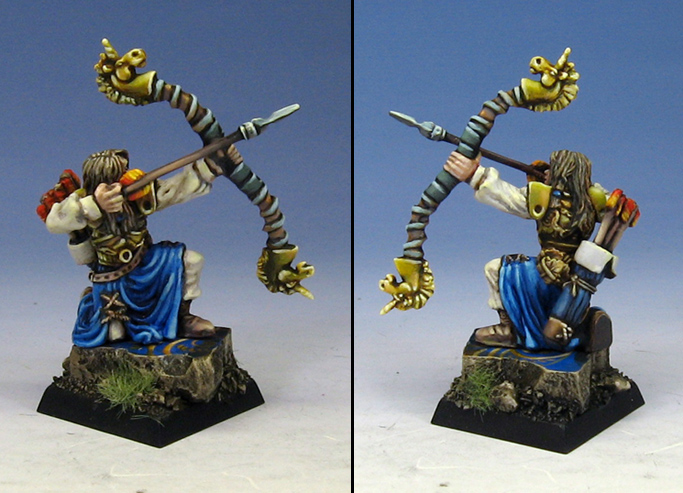 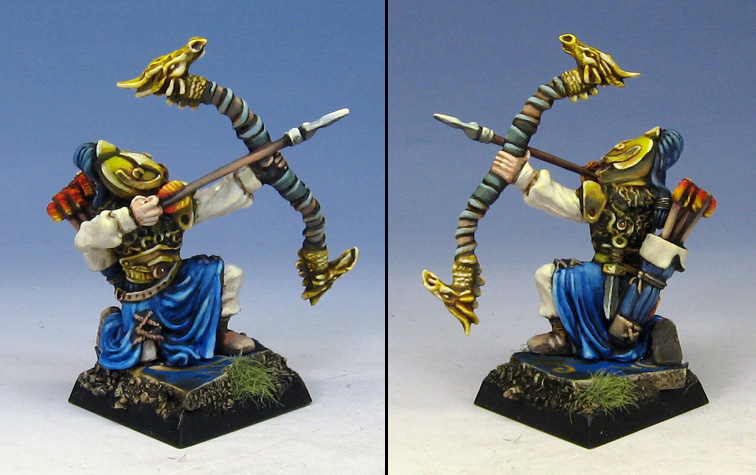 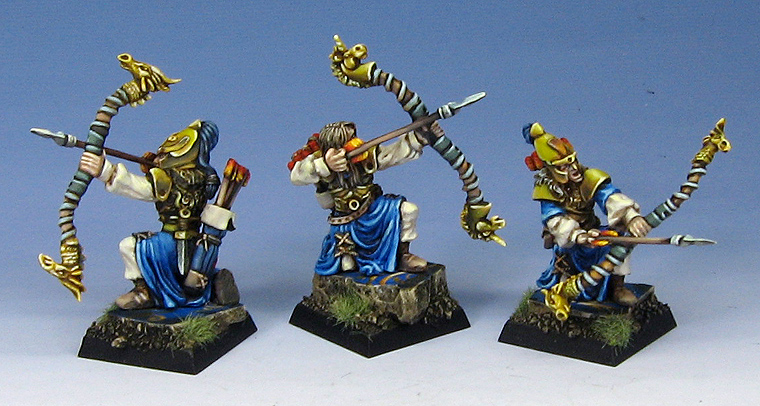 The command group is also interesting.  The harp is pretty wild! 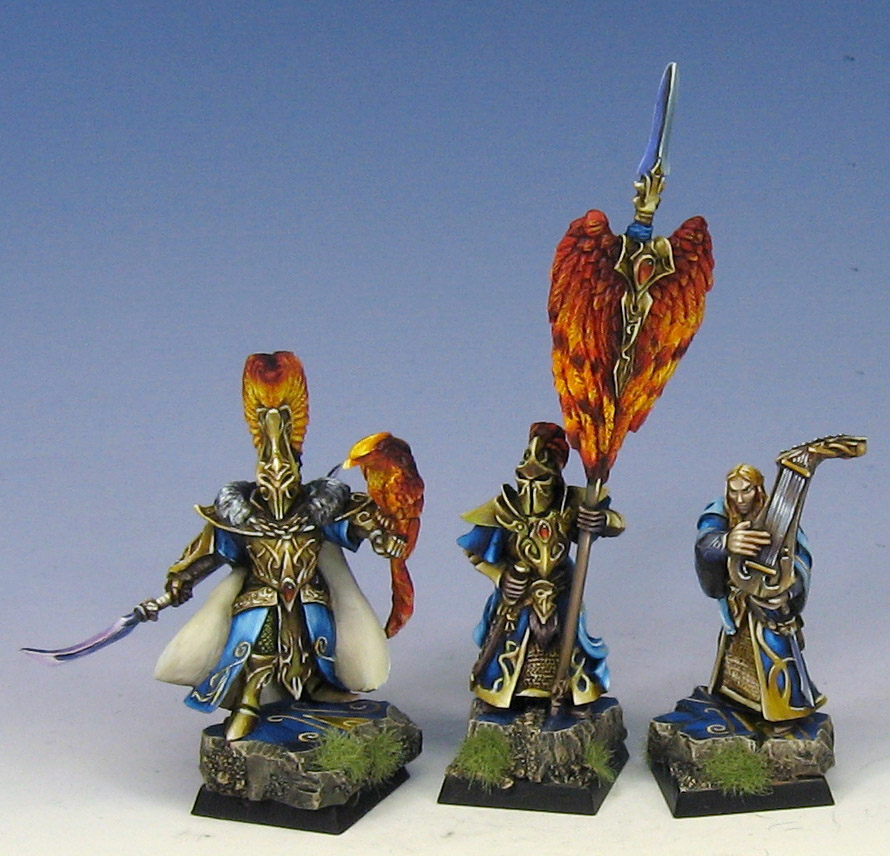