Preparing for war (or weathering) 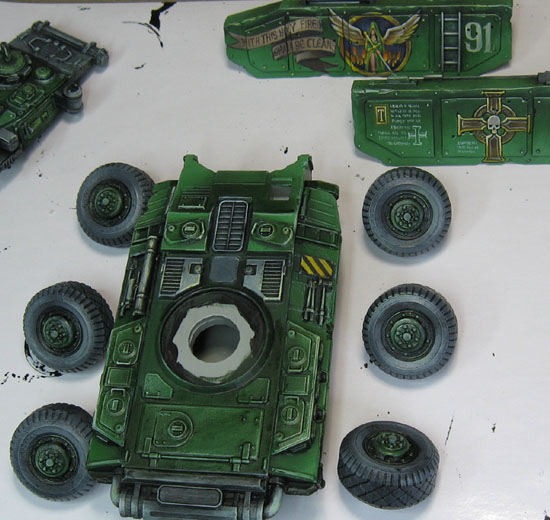 I shot these images as I was working on the freehand for the Weathering video.  There is nothing that works in such a mutually supporting way as freehand and weathering.

When you combine the two together, each effect becomes somewhat more realistic.

This is where is gets started, blocking in the design.  You can see that I was working from one of the large bases from the Sisters Army.

The blocked in designs are refined with some more shading, more colors, and some text.

Refining begins in earnest, adding some of the torches and flames as well.

Additional designs, such as the numeral, as also added.

Can't forget the other side.  Some fun lettering!

More lettering and some safety stripes.

Just about everything ready to go for some weathering!!!  Stay tuned. 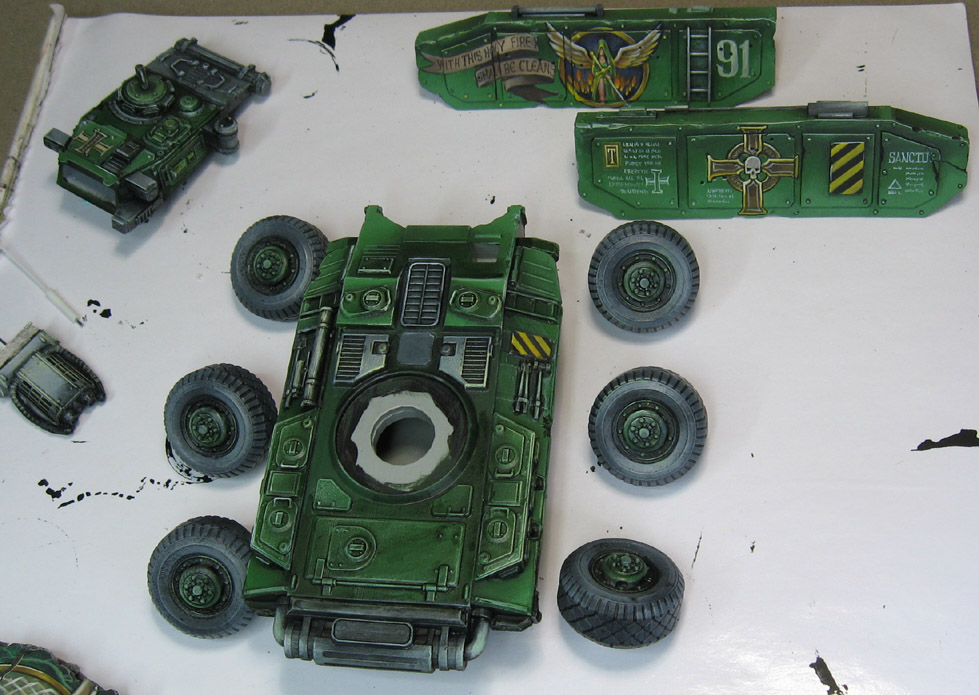 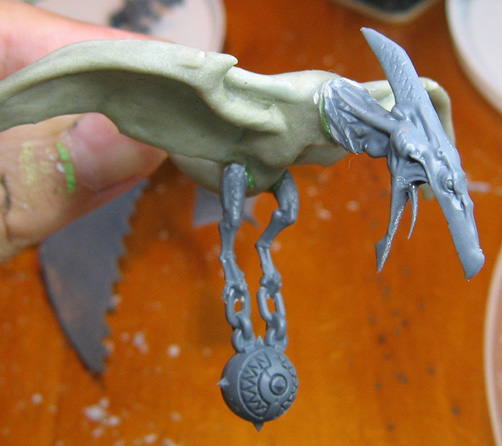 OK, here we go.  I spent about 8 hours filing and prepping stuff today, so I worked in some of the terradon conversions.  I put together the Rippers, carefully trying to keep the left over terradon bitz close at hand. 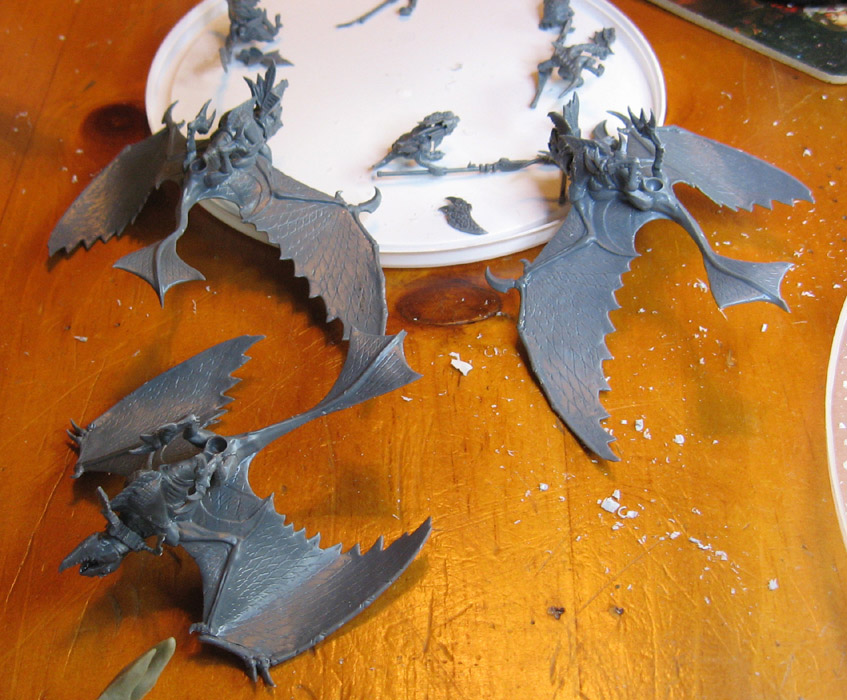 If you remember the previous post, I had 3 terradons that still did not have a fully sculpted face or rear legs.  I had hoped back in the day that I could sculpt some different legs for these which would extend out from the body, instead of being flat against it like the original sculpts. 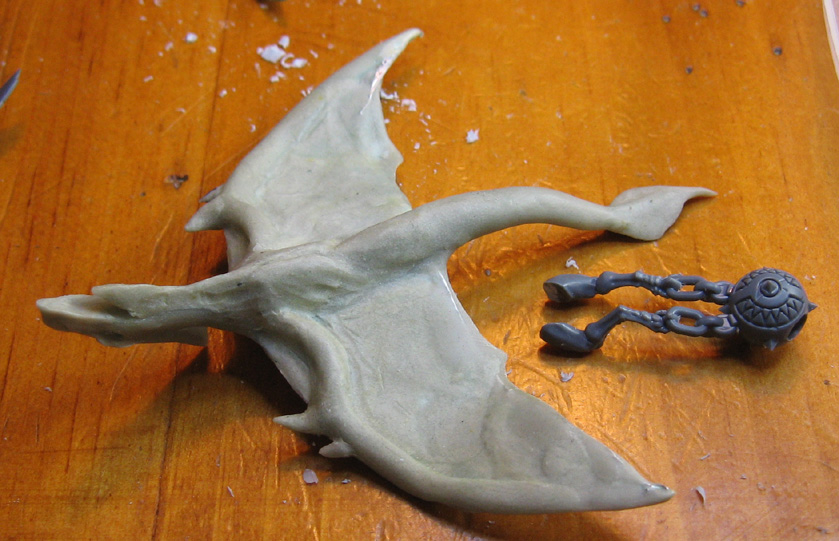 I was also hoping to save a lot of time on sculpting by putting the terradon faces on the bodies as well.  I somewhat hesitantly chopped of the half sculpted heads, and hoped for the best! 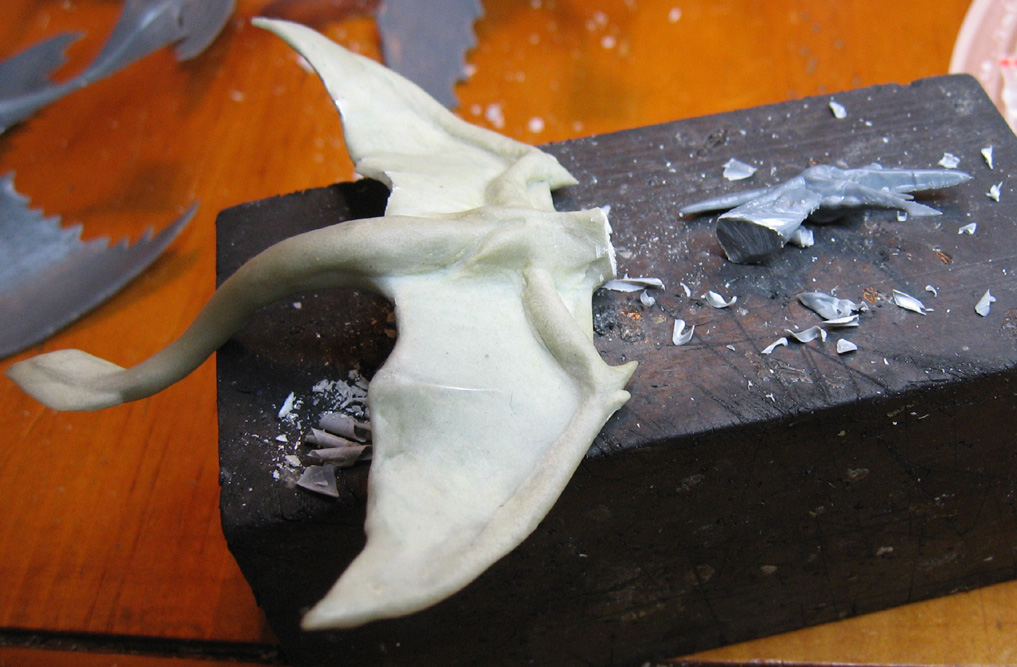 To my shock, the legs were the exact size and shape that was needed!!  That is amazing, since these things were first sculpted about 3 years ago!  Wow. 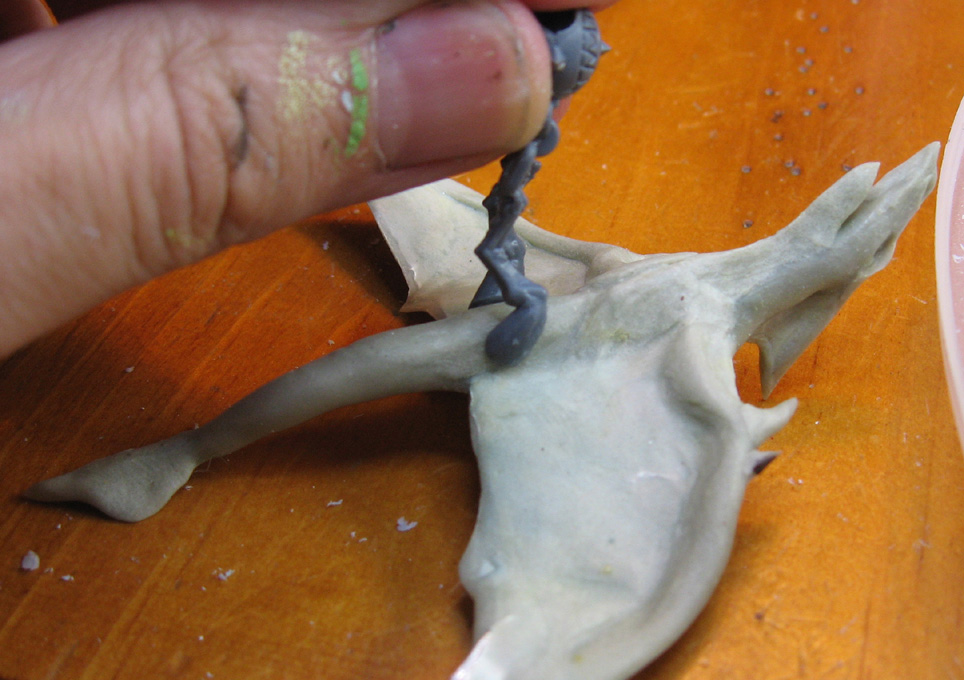 With just some rough trimming, I was amazed to see how my tin foil and Apoxy Sculpt terradons worked with these new plastic pieces. 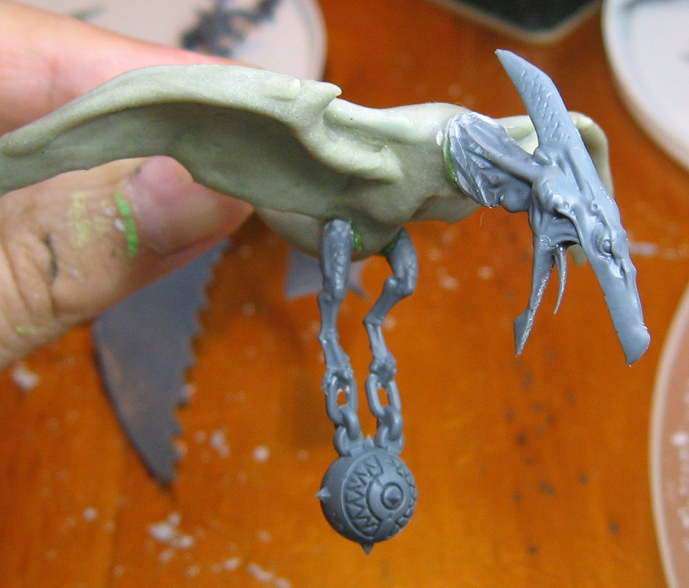 I then proceeded to do this on each figure.

The pieces fit just fine, even though each of my sculpted poses was quite different.

The next challenge to overcome was getting the flaming bolas to fit on my regular skinks that I was saving for things like converting skink characters.  A snip here and some glue there, and it worked!! 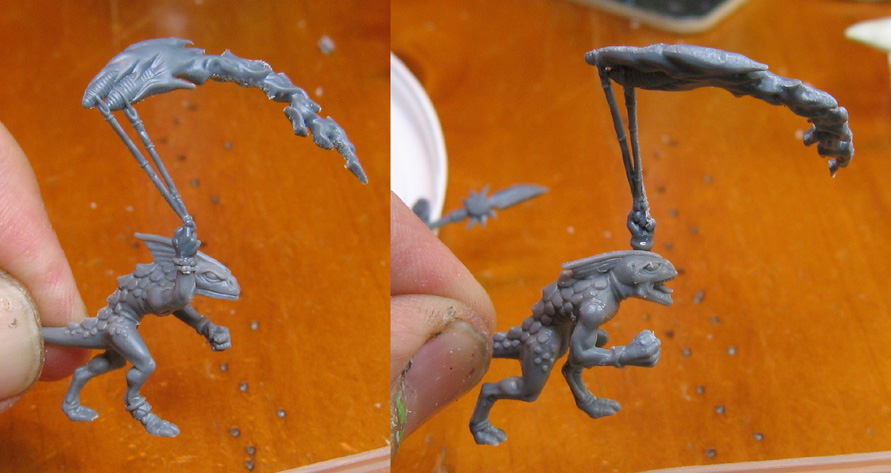 After I worked on some other prepping for a few hours, I went back to do some more trimming and filing of the neck joints.  I will be doing collars, feathers, and other decorations that will easily bury any irregularities.

As I moved on to each terradon, I became more excited as I realized that this was going to work far better than I could have hoped. 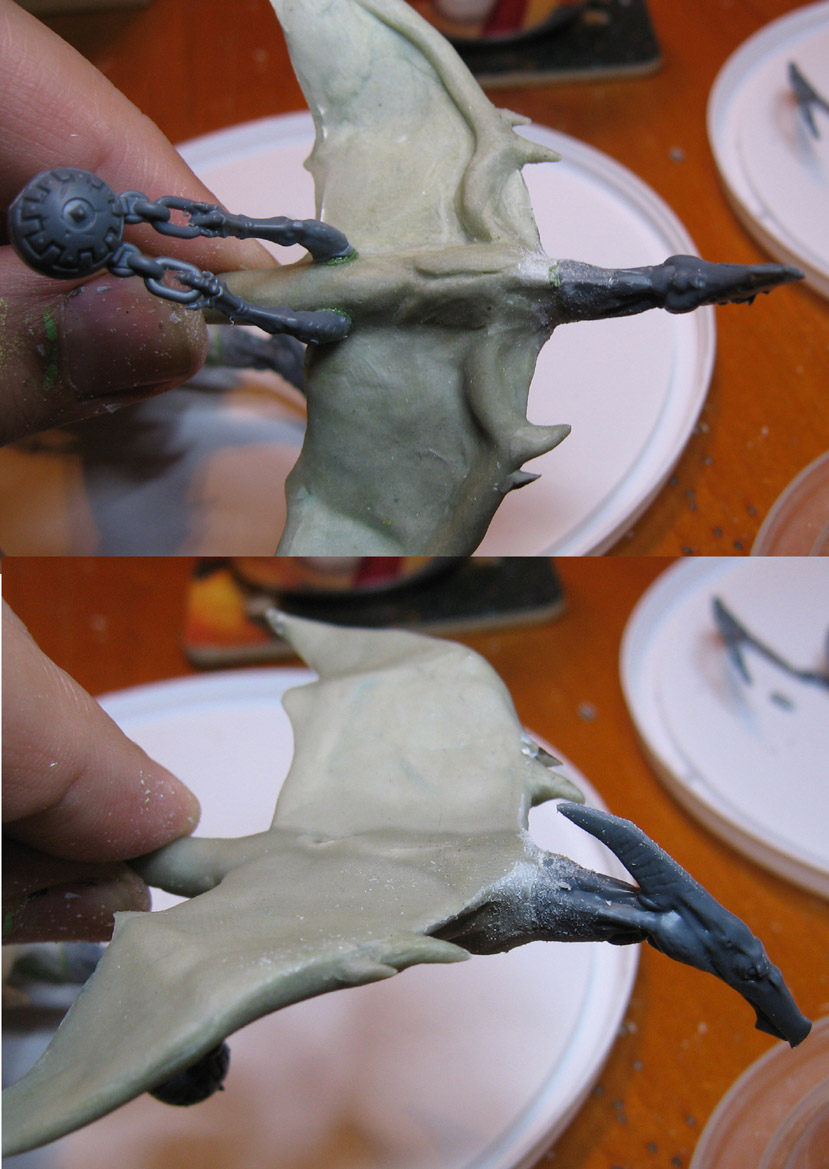 There was one last anxious moment.  Would the skinks fit on the backs of these new terradons, and could I make one of the arms be at such an angle that I could sculpt a rope or reigns of some kind to attach to the collar.

Sure enough, they were right on schedule!

This was making me very happy!  I needed that, since it has been a brutal couple of months.

I have some green stuff work to do on other projects, and more basing.  So, I will try to add a few bits of that on the terradons here to keep them moving along.  Then I will add all sorts of extra bits that I have saved and gathered. 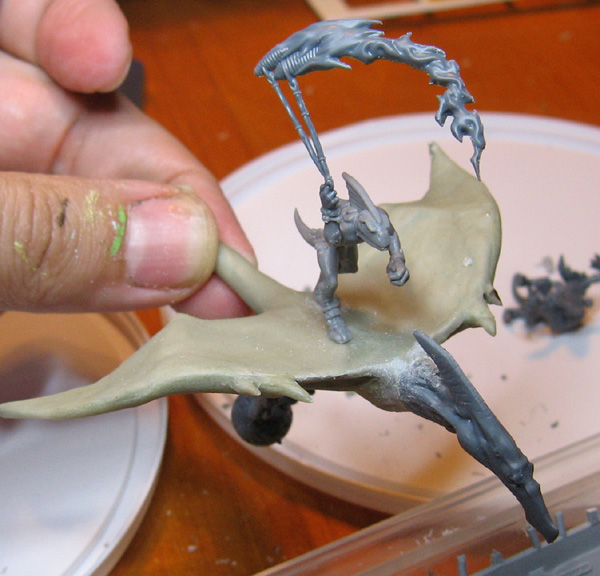 I used the special character figure on one of the terradons that had the most dramatic pose.  He was the only skink that would have even come close to working.  To my surprise, once again, the plastic sculpt fit almost perfectly, looking very natural!

Since the rocks hanging from the legs have an empty socket for the plastic mount, I will be able to pop these back and forth between my terrain pieces and their normal bases.  It just gets better! 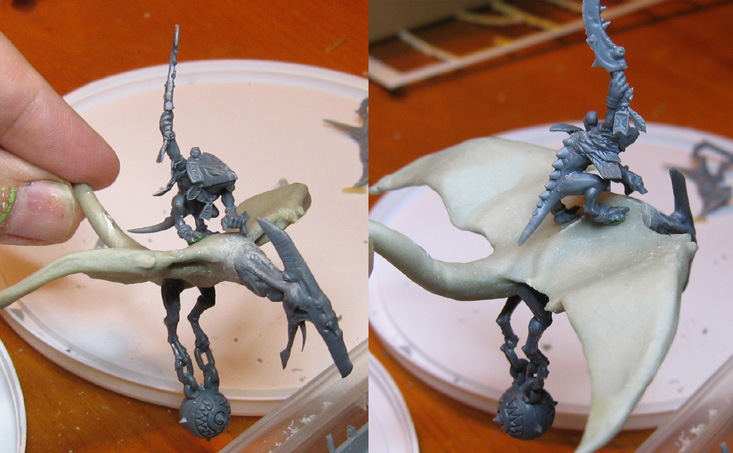 Posted by wappellious at 4:16 AM 4 comments: