Get into the Legion 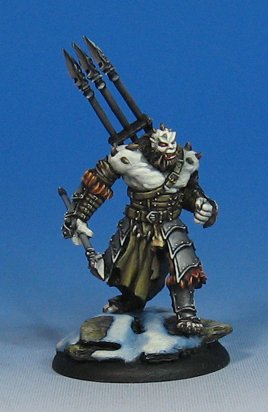 Privateer Press graces the blog again, this time some Legion of Everblight.

This is all part of that same winter theme of the Mierce Miniatures and Red Box Games that you have also seen frequently.

Many of these will be showing up over time, along with some interesting Privateer Press Tharn cavalry figures.  I'm really looking forward to those! 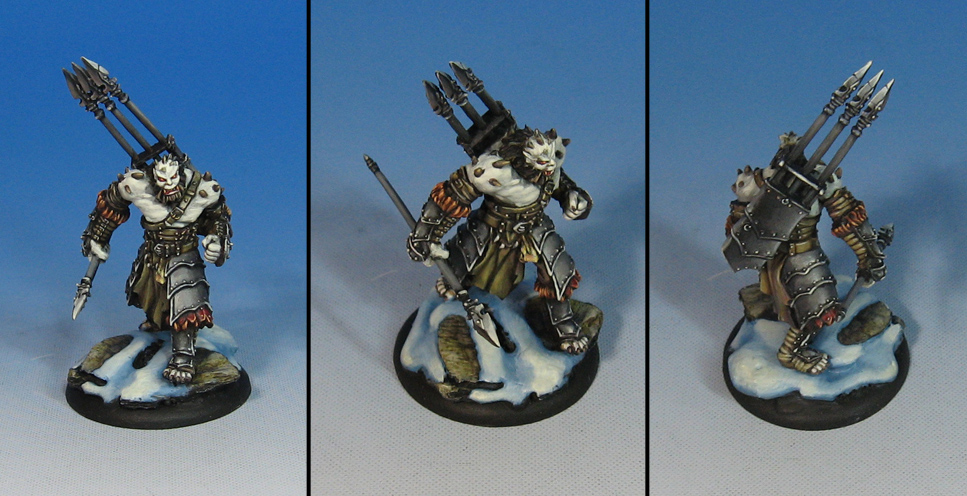 Holy Order of Man vs Enlightened: Springing the trap 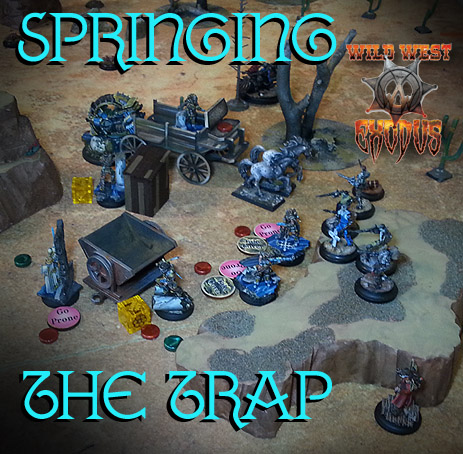 When we last saw our intrepid Heroes of the Order, they had managed to go unseen, setting a trap for Carpathian, who was still occupied in the streets of Wappelville killing the crew of the Wells Fargo wagon.

In all the commotion and confusion, a few brave Spica were able to secure some of the containers of RJ-1027.  They had to be brought to a safe location, so the task of weaving through the dense forest driving a wagon laden with unstable and explosive RJ! 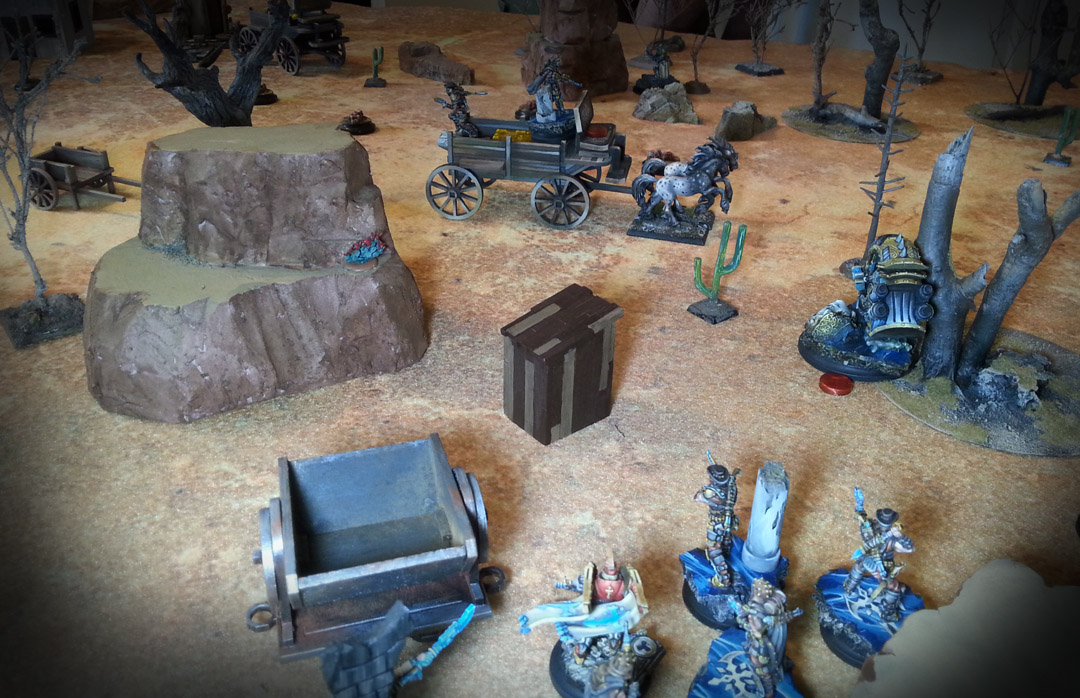 It became clear right away that this task would be impossible, given the fact that the road had been covered with  deadly mines!

Carrying these containers out by hand required yet another Spica, leaving them dangerously exposed. 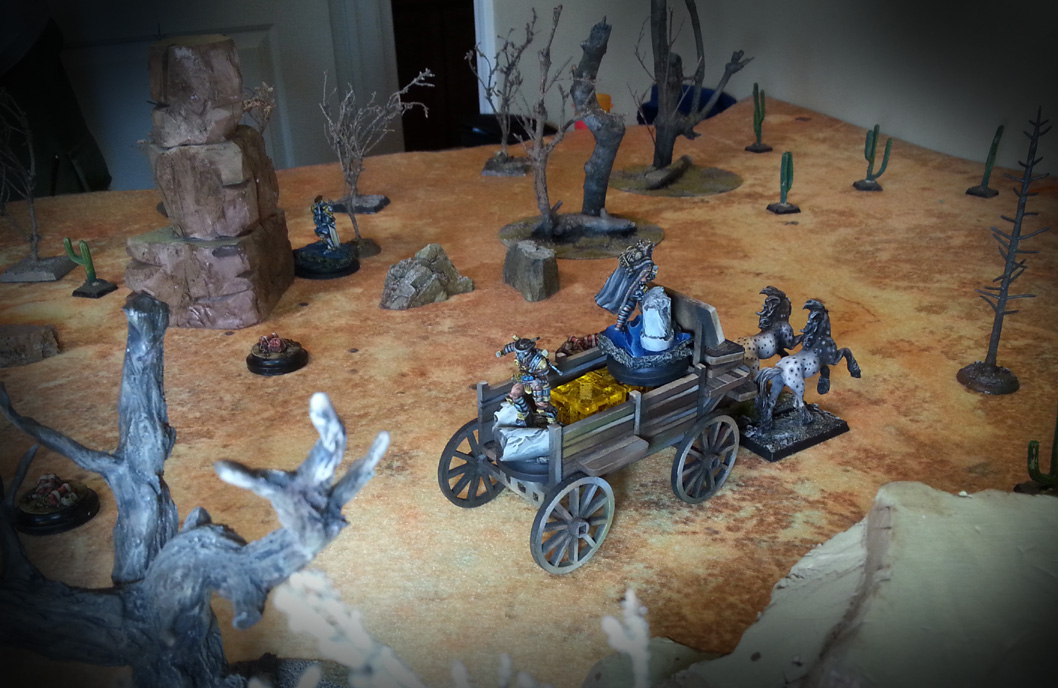 At this point the final member of the wagon crew had been killed. 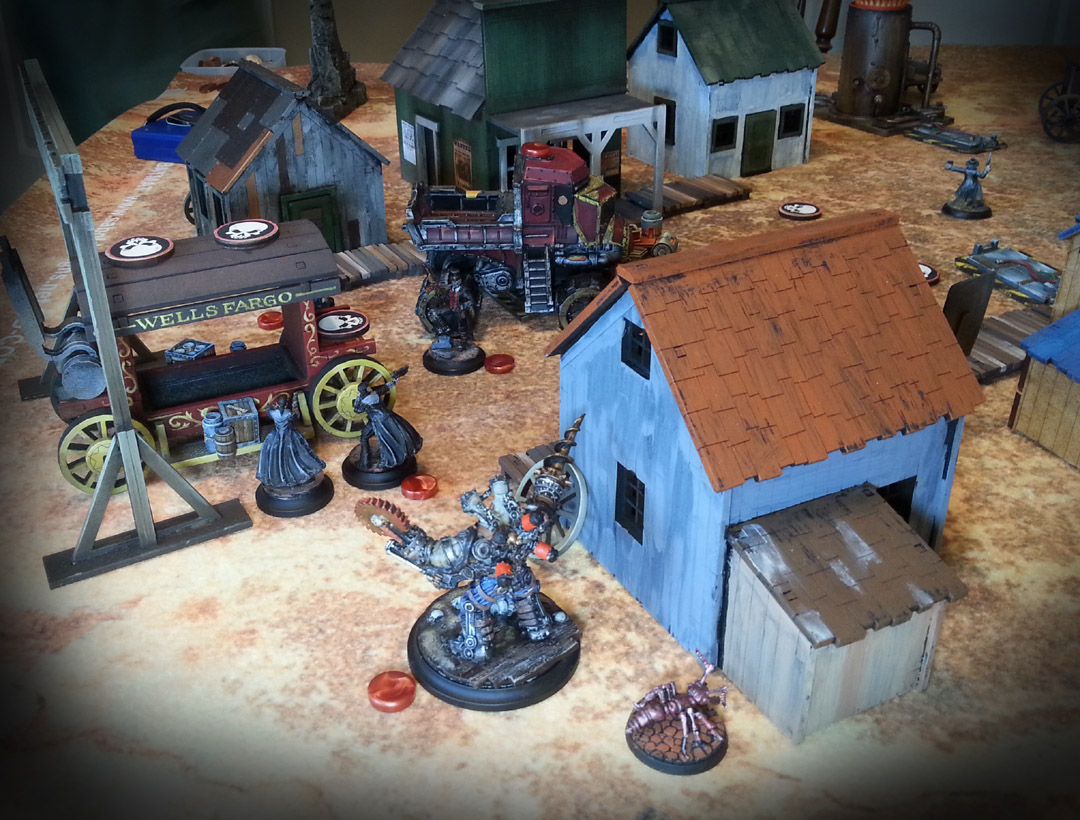 While killing the crew and all the civilians meant the coast was clear to move the wagon out of town, valuable time had been lost.  This meant that the wagon would have to be driven at high speeds on road known for its natural and man made hazards. 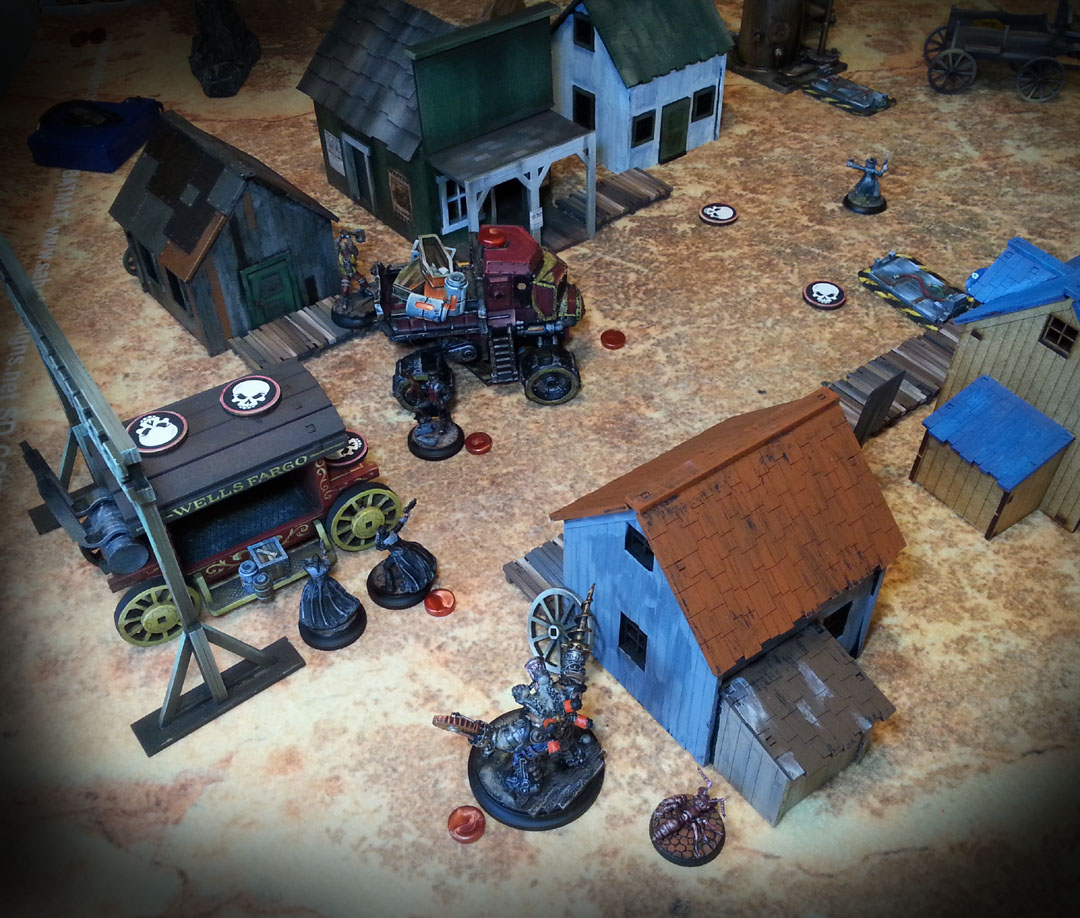 Carpathian and his savage undead creatures piled back into the Ironhide, hoping to escort it through any further resistance.  As a precaution, Carpathian had arranged for young Edison to lead a second contingent from Payson towards Wappelville.

What he could not assume, however, was their time of arrival. 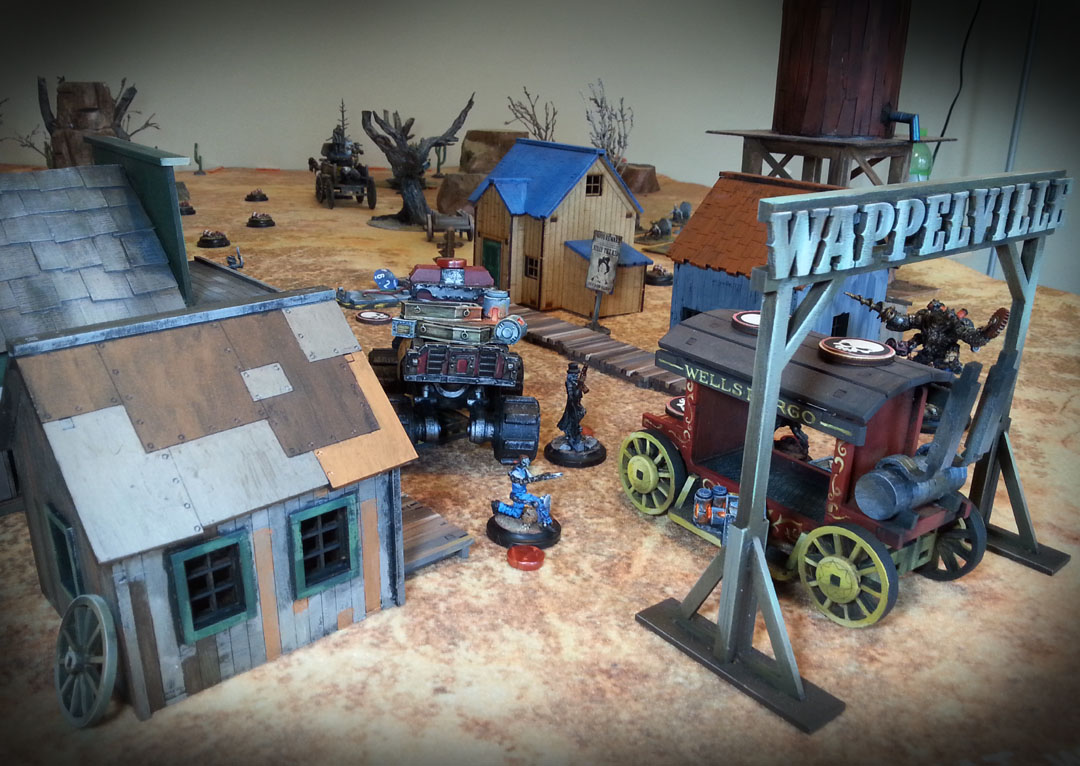 A dreaded K-9 headed for the Preacher's wife, who stood no chance against it's iron fangs.

This final barbaric act also revealed something else... the presence of the Holy Order!!  The K-9 sensed the Spear of Light, which had sped off the board with the container of RJ-1027.

Carpathian began to set a new plan in motion... 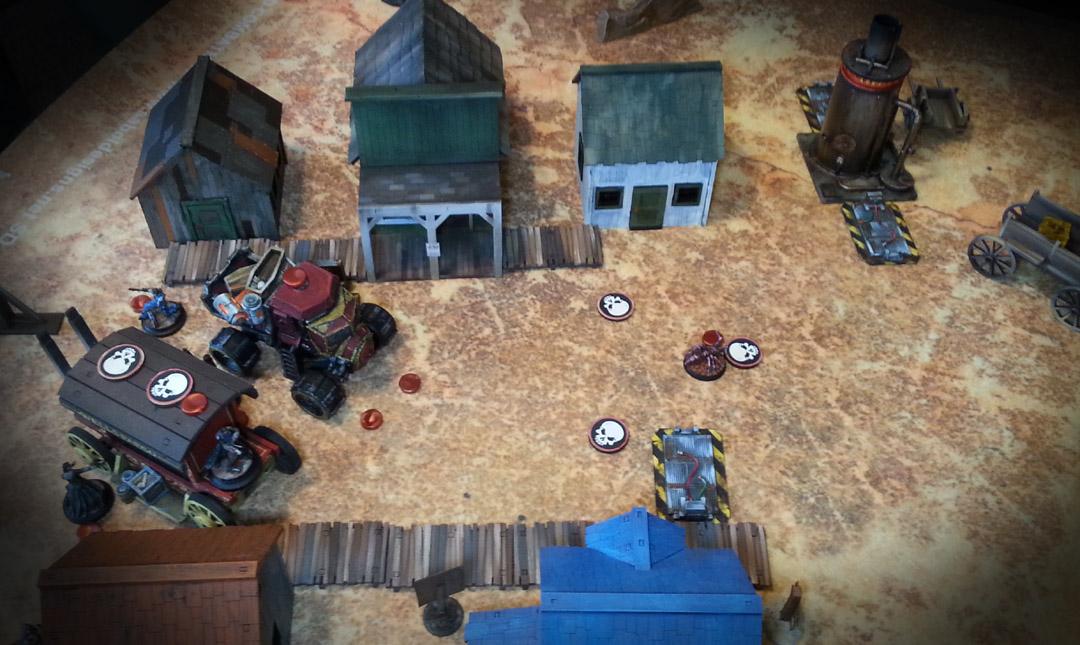 The wagon had been driven as far into the woods as possible, and the containers were unloaded.

A distant scout had warned the ambushing units that more Enlightened were on the way, but they could not tell in which direction they would be arriving.  It was possible that the Order could be set upon by these new marauders before they cold spring their own trap! 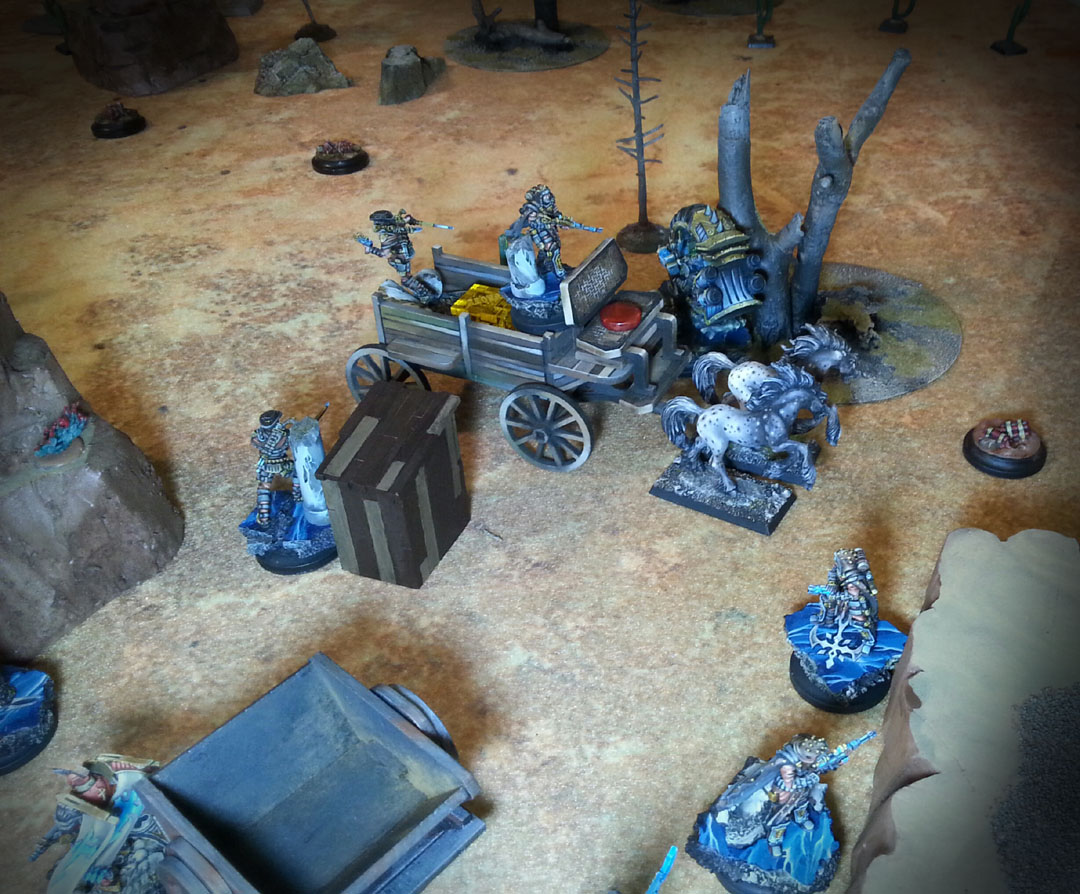 They decided to take up the strongest position available, in the crags and rubble of the mine entrance.

It was hoped that their Sprit Aim ability would allow them to reduce the approaching Enlightened while they were out in the open.  Once enough had been killed, the rest could be finished off with their Relic blades. 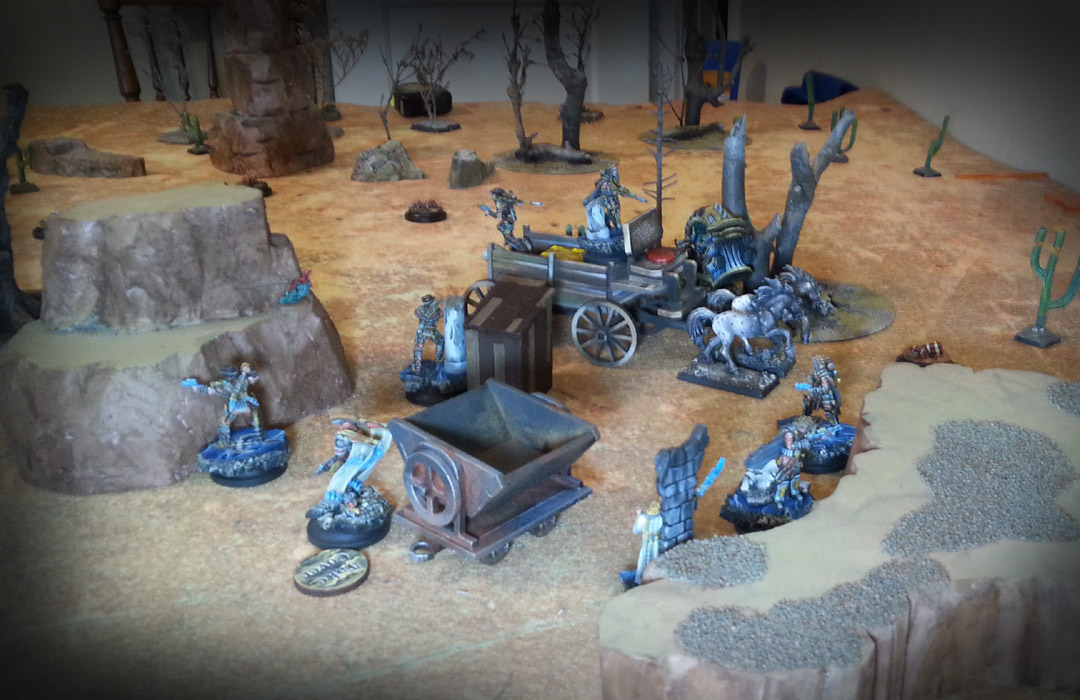 With the presence of the Holy Order now confirmed, Carpathian assumed that the road would be blocked by felled trees, or even mined.  It was a well known Holy Order tactic.

The Tumbler placed itself in a firing position, assuming that Carpathian or some of his minions were going to attach the Spear of light, which was returning to the wagon to get the second container. 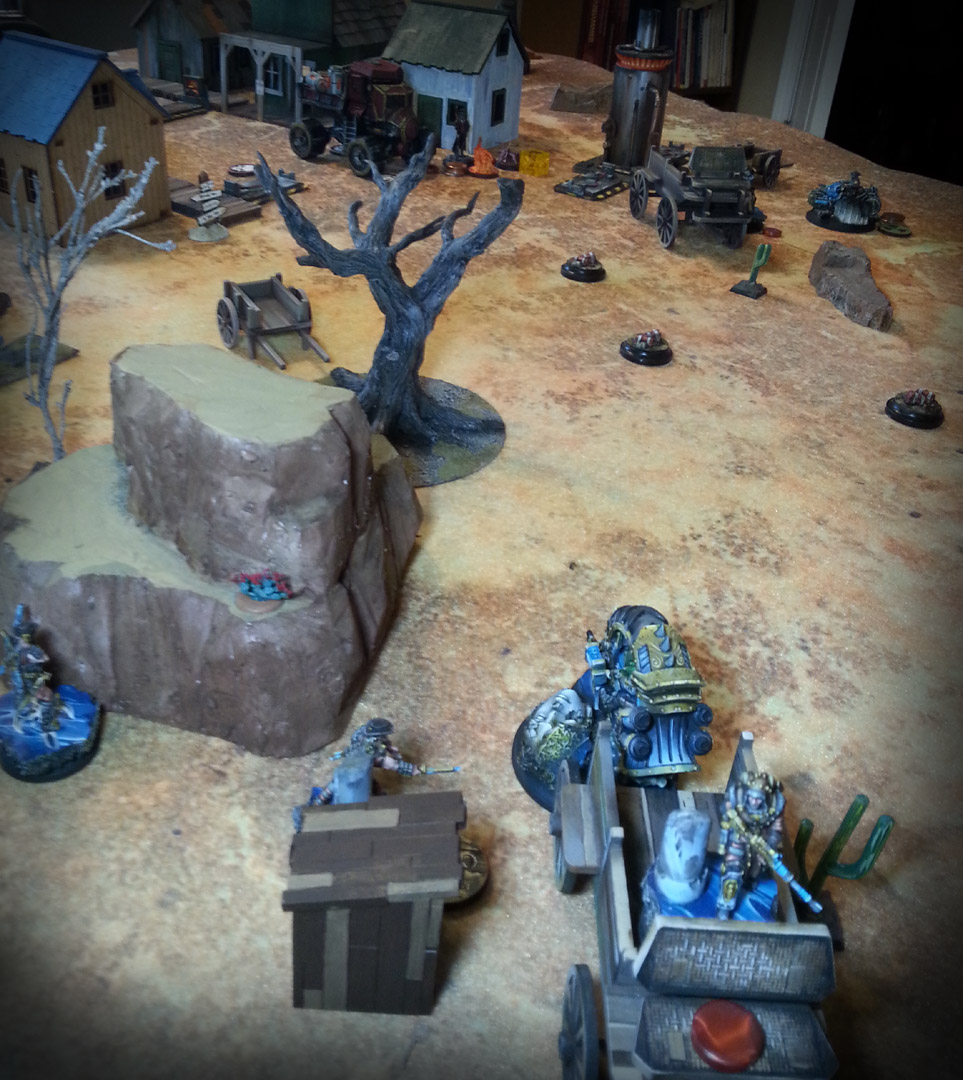 This is exactly what happened.  The Tumbler let loose a long range volley, setting fire to the Evil Doctor.  Time to stop, drop and roll!!

Altcap Oron poured as much fire as he could into the Ironhide.  His aim, as always, was true, and significant damage was done. 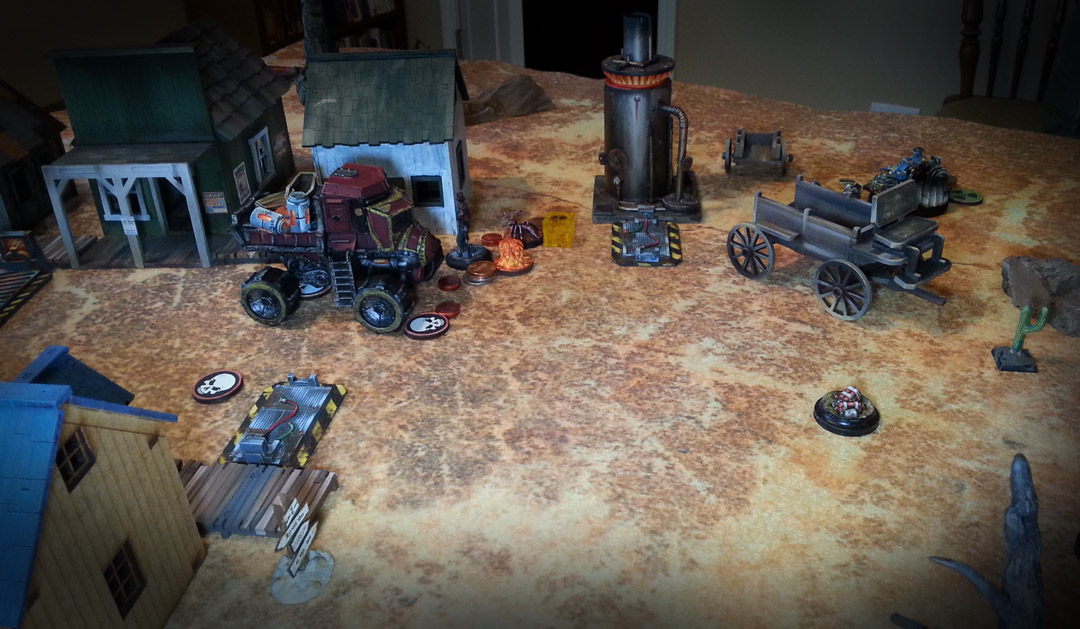 The Kaufmann twins now drove the Wells Fargo wagon to the edge of town, hoping that by attracting the little long range firepower the Order had to themselves, the wagon crew would be safe. 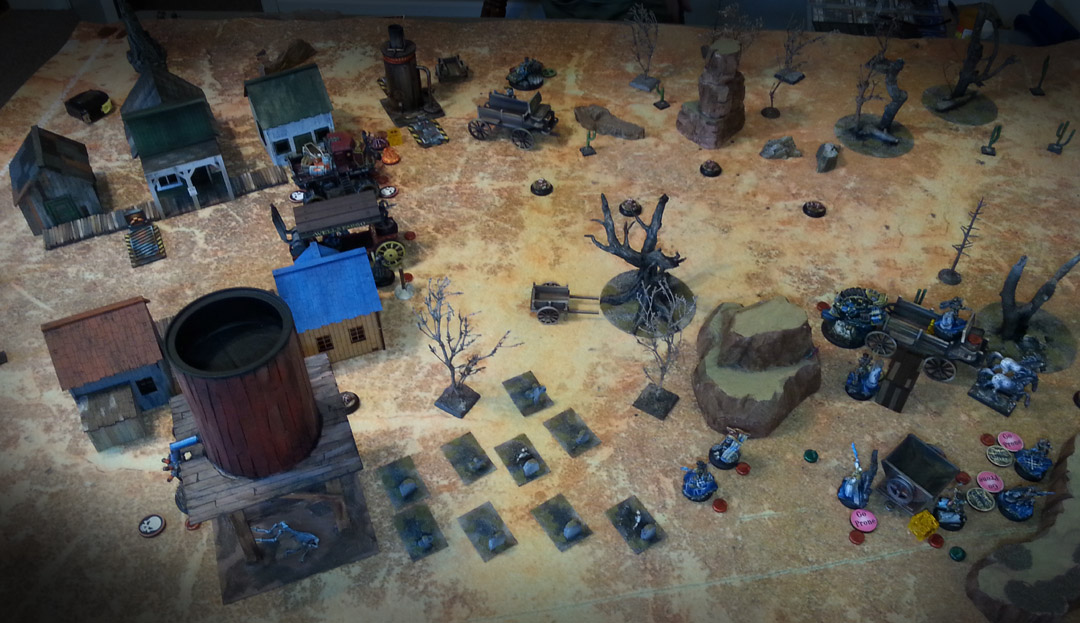 Drat!  Not only did the Edison contingent arrive much sooner than expected, they emerged right on top of the defensive position the Order had chosen!

Things cold not have been better for the young inventor, who would employ his sonic weapon to push his hired hands right up to the prone Spica.  Even their rigorous training would not save them should the blasted creatures set upon them in their foxholes. 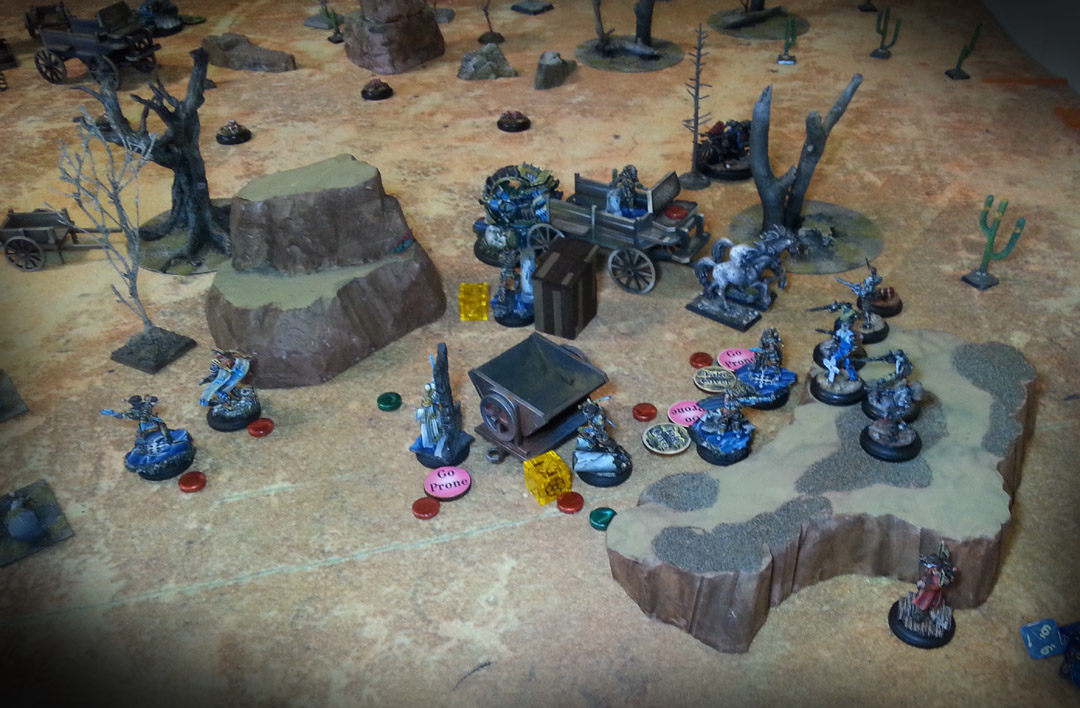 More fire from the Order also set fire to the K-9, who was moving away with the RJ container in its metal jaws.  Carpathian still managed to kill the brave driver of the Spear of Light.  Soon after, he was able to put out the fire burning his favorite overcoat. 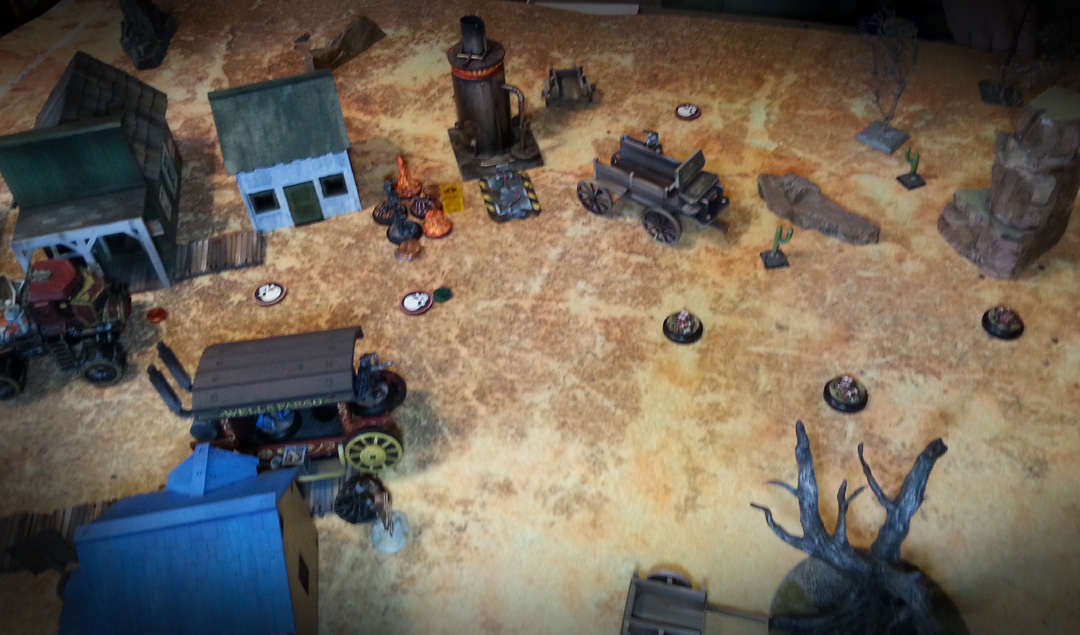 The Spica around the mine entrance were saved by a strange malfunction in Edison's Sound Wave weapon.  Only two creatures made it to the waiting Spica, which meant their comrades could come to their aid.

The nearby presence of Altcap Oron meant that each would have an additional shot.  Also, their Spirit Aim would allow them to shoot into the few close combats without hitting their fellow soldiers. 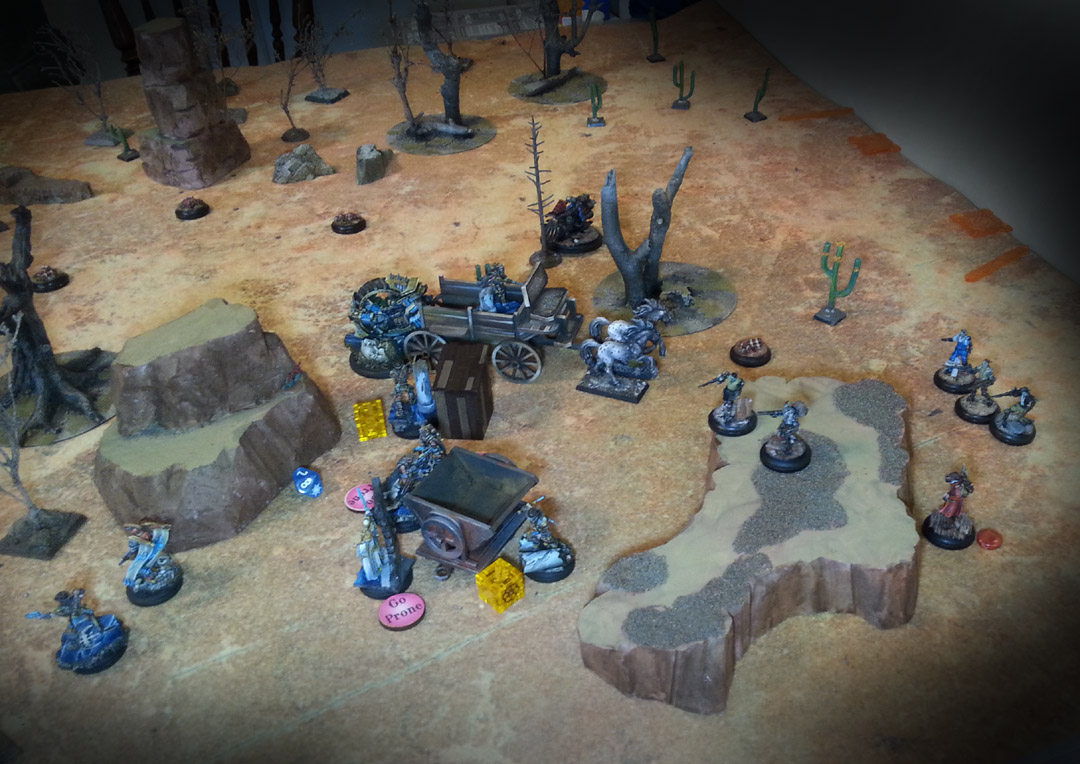 An Iron Horse zoomed down the road, hoping to take the Tumbler by surprise.  It had been busy shooting at Carpathian and the K-9.

The Spica which were carrying the RJ containers out of the wagon immediately dropped them to go after the Iron Horse and its corpse driver.

Can the Order withstand this new assault and still stop the Wells Fargo wagon?  What new horrors will Carpathian and his cohorts bring to this fight.

Find out in the third and final Episode... "The Final Sacrifice". 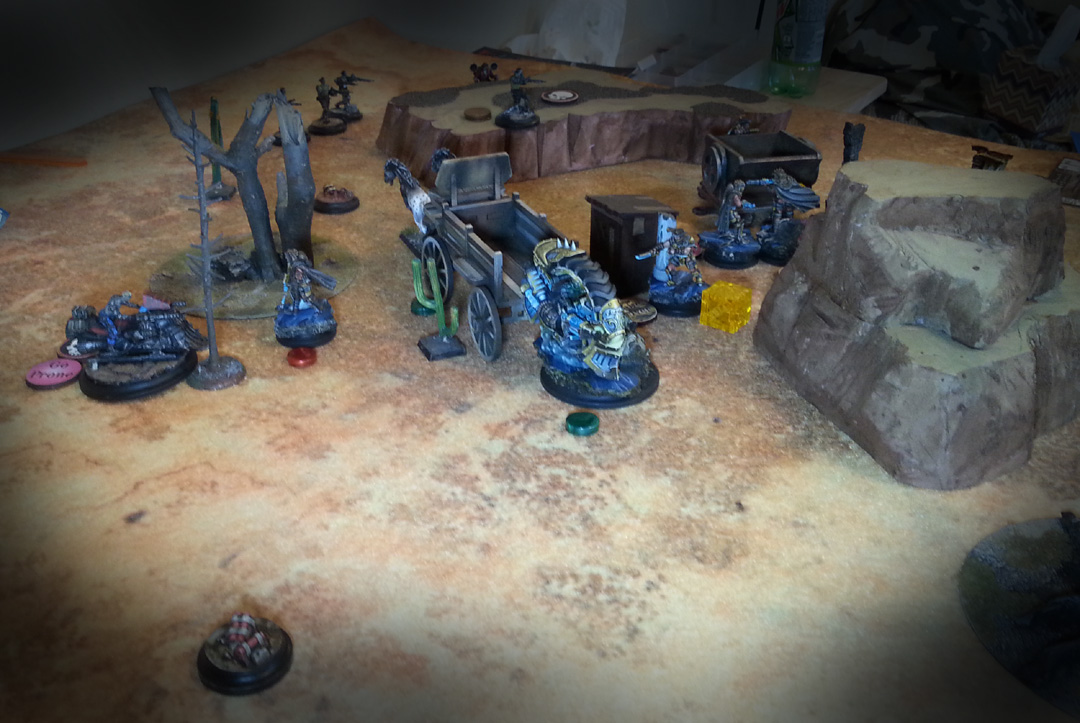 Posted by wappellious at 12:16 AM No comments: