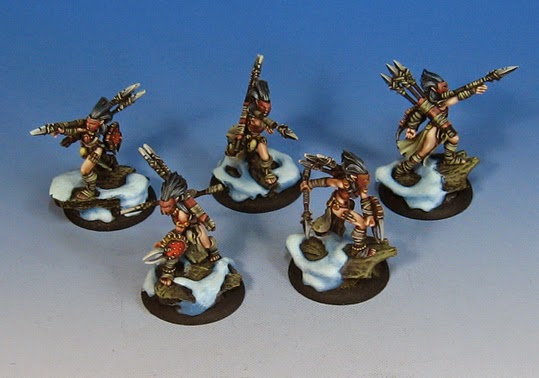 A little group of those Privateer Press ladies. 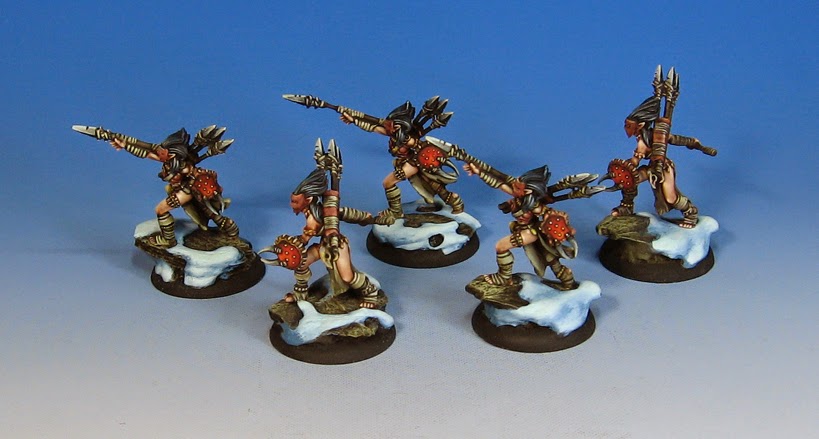 These were fun to paint, and the subtle variations in the browns and skin colors was an interesting challenge. 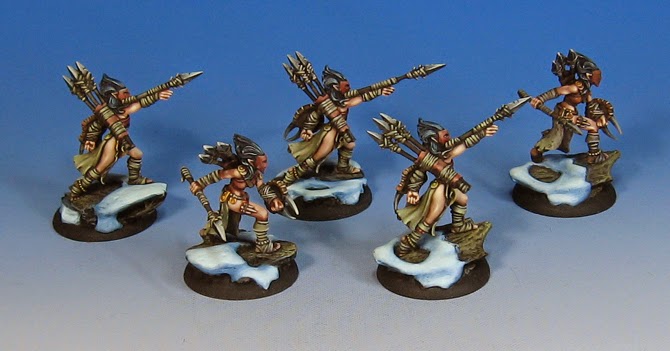 Seeing them in a group is also very satisfying... 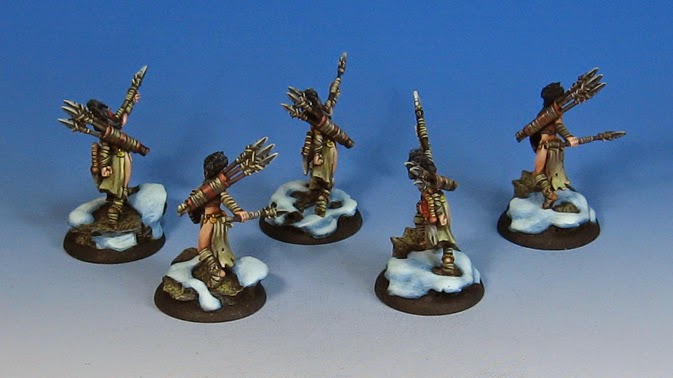 I don't know what they are exactly... I'm sure they are from Hordes... 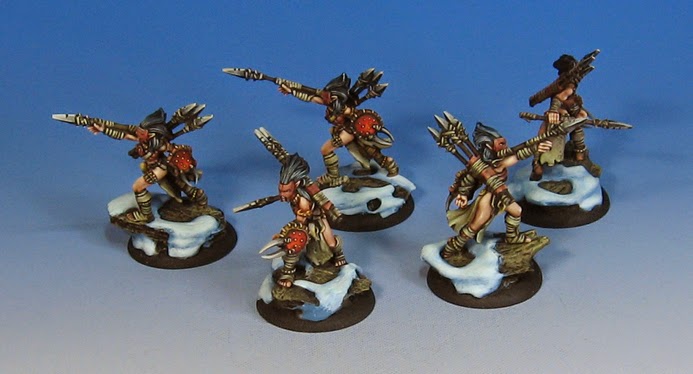 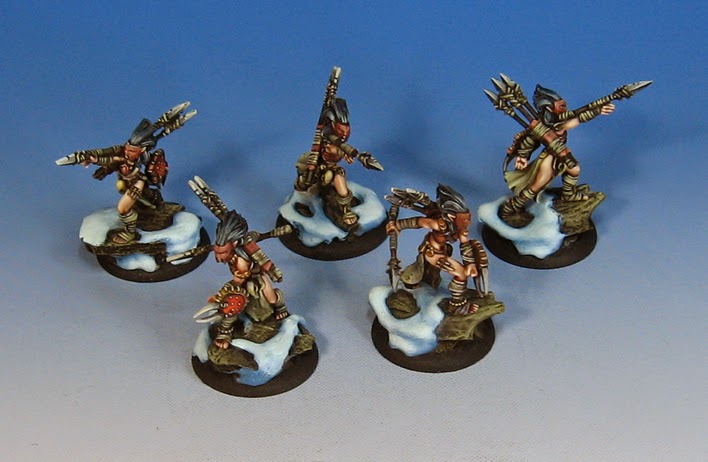 And on a different backdrop... 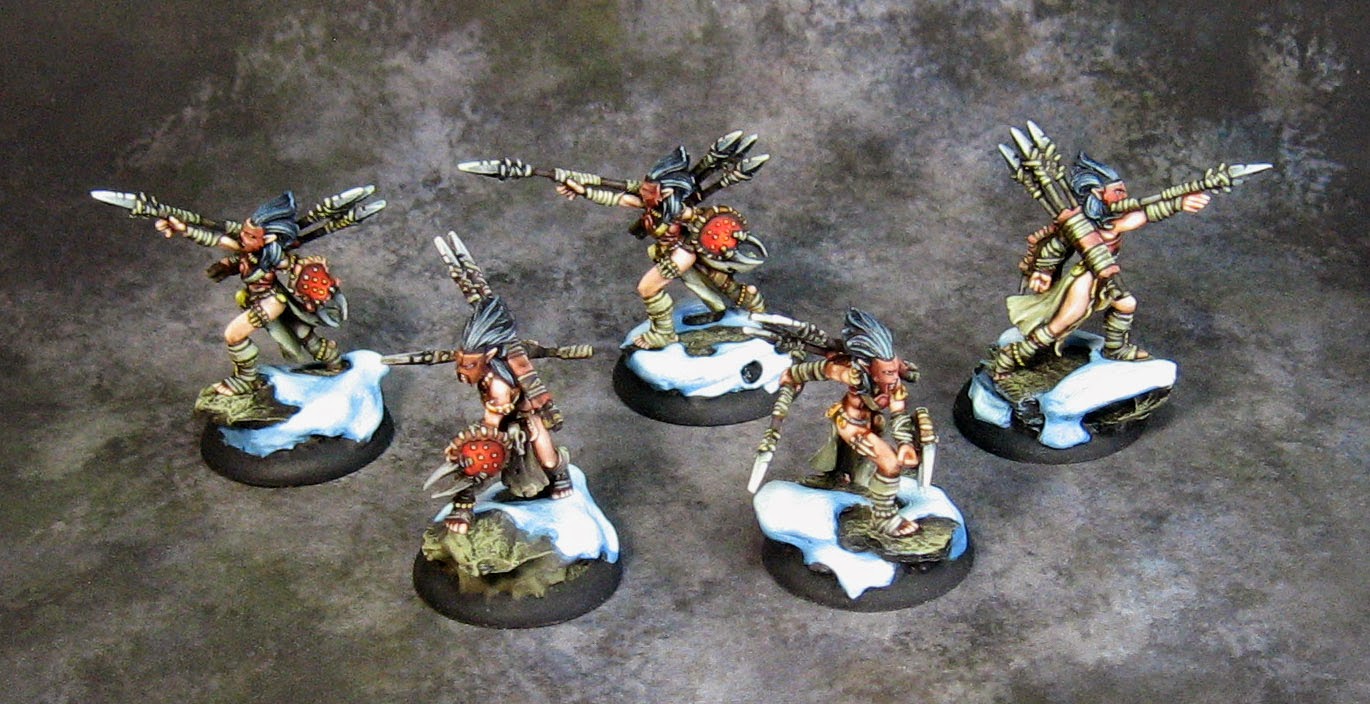 I still can't get over the difference a backdrop makes... it can really emphasize or diminish certain colors!

You Shall Not Pass! 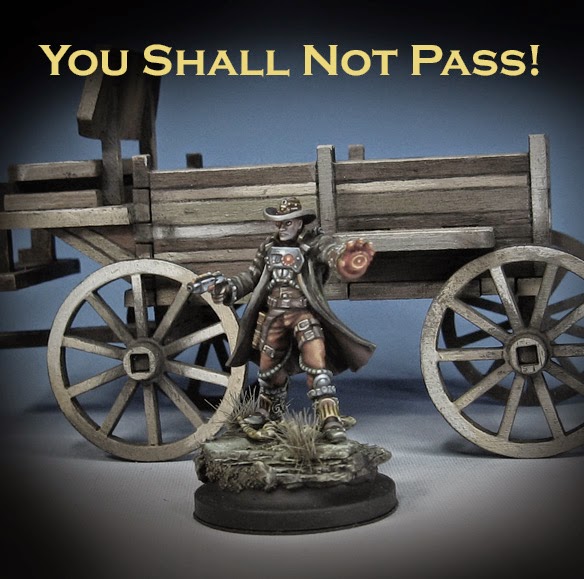 We return to the scene of carnage and destruction once again, an increasingly desperate struggle between the ever vigilant Lawmen of Wappelville.

Death was not a stranger to this would be capital of the new state... and Death had brought many minions with him.

The battle took on an all new outlook when the Ironhide disgorged is grisly passengers... stinking, rotting animations which stared forward with dead eyes and deadly guns.

All that stood between the advancing horrors and the pile of RJ-1027 was a Lawman Hired Hand and Bart Ransom, scouting the area on his trusty Interceptor.

Realizing that he had to do something immediately before the entire corner was overrun, he decided to fire all of his hyper velocity cannons.  Ignoring his own safety, Bart let loose the volley, knowing full well that he would potentially be caught up in the blast as well! 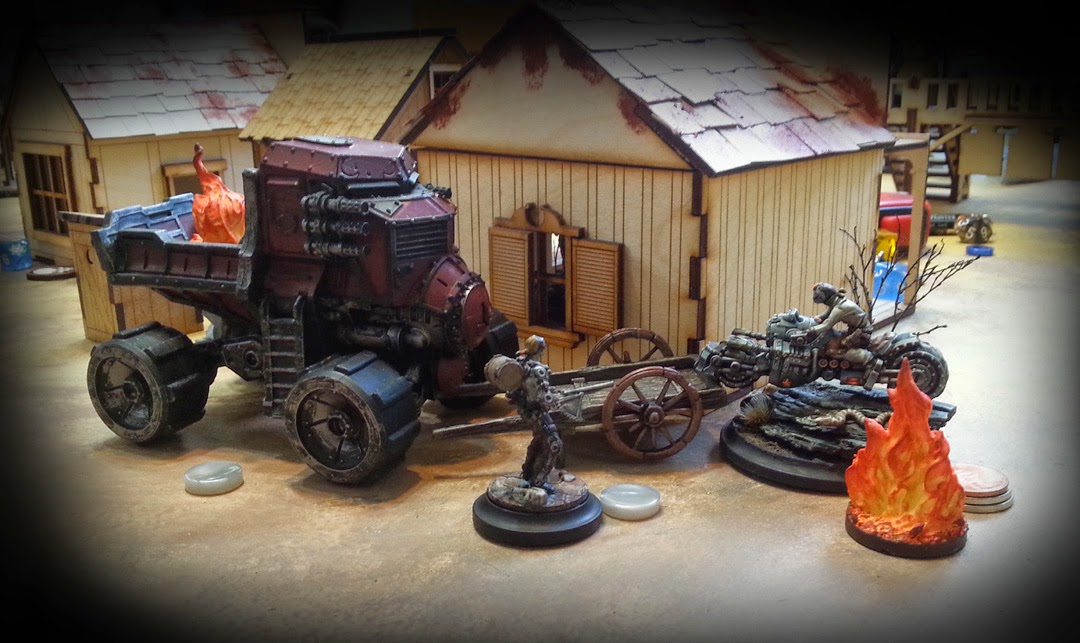 Miraculously, he not only survived, he took down three of the evil constructs, and damaged the Ironhide.  Perhaps the Dark Council had something in mind for him later...

Ultimately, he gave his life, as Missy used the sounds of his firing to target the Enlightened with her Death Launcher.  She managed to set the Ironhide on fire, as well as another construct.

Bart would suffer serious burns before his death.  He would be remembered in blood. 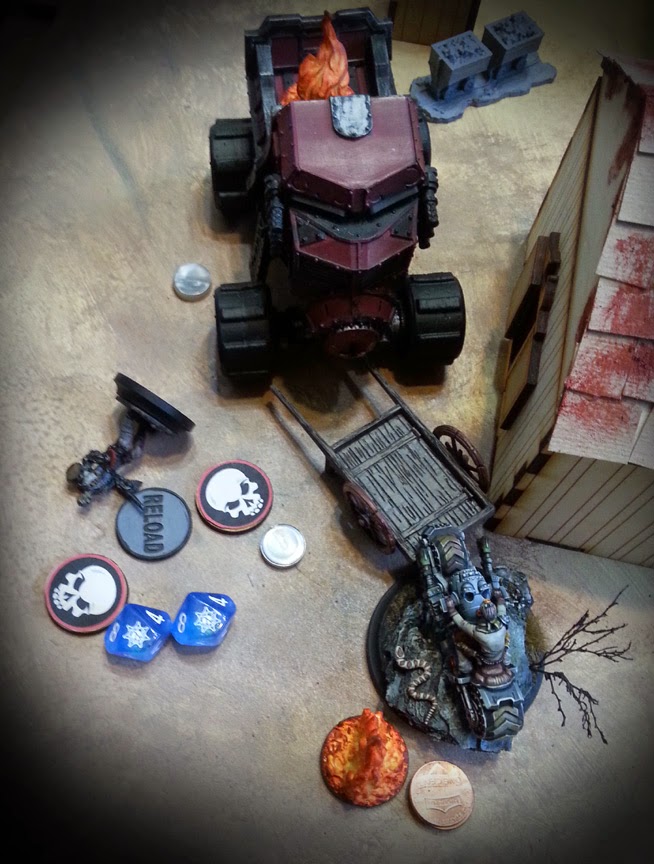 As the contest for the RJ-1027 rose to a fever pitch, the Earp Brothers stood shoulder to shoulder and pounded anything that moved towards the main power generator.

Carpathian would never claim this power source for his own. 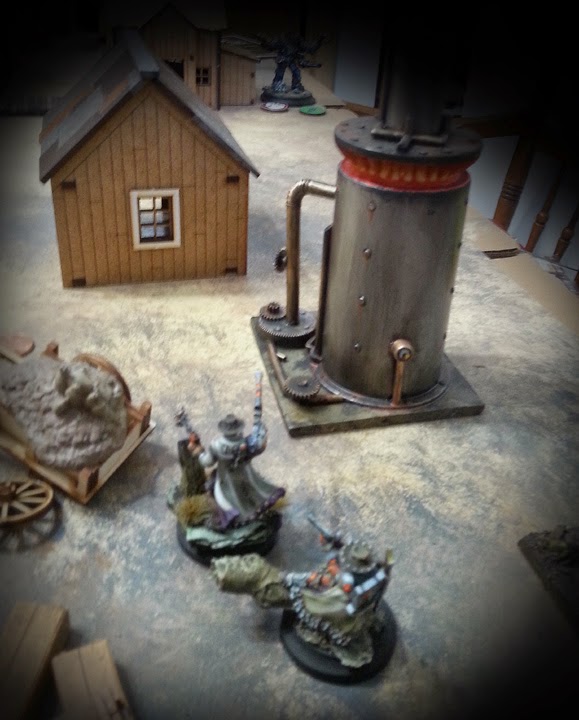 The original intent of the Judgement heavy support was to drag in Carpathian and summarily execute him.  However, Carl Fredrickson was now under assault from both Kaufmann brothers.

Destroying the wagon intentionally was not an option.  If you recall an earlier statement I made about this moving objective with variable points, it was worth 4 points if you controlled the wagon, or two if you were merely "along for the ride".

However, if the wagon was destroyed by an errant blast template, it would be worth -2 points.  Should you unwisely choose to destroy it intentionally, that was a -3 to your score!

This was to represent the fact that such an act would likely result in a rather substantial crater in the center of town!!

The Judgement vehicle decided to use its rail gun to take down one of the Kaufmann brothers to equalize the odds against Carl.

Apparently the Dark Council has quite the sense of humor, as you can see the retrograde results of the dice rolling... moving from re-roll to re-roll starting at 4, to 3, to 2, and finally... a '1'. 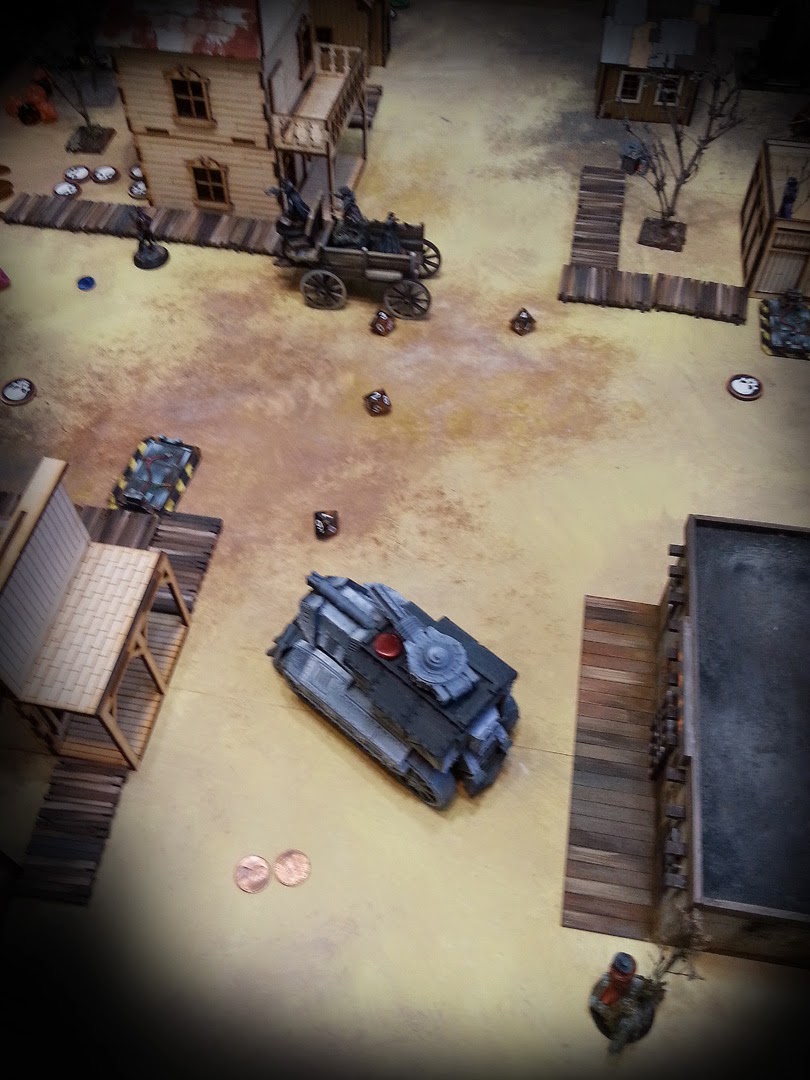 With the shot from the Judgement missing the mark, and even more desperate action was taken by Virgil Earp.

He ran as fast as he could towards the wagon, ignoring both Carpathian and Vlad in the Saloon.  The wagon was deliberately targeted, catching the Kaufmanns and Carl in the blast!

Incredibly, Carl was alive, and the wagon was intact.

One of the Kaufmanns was dead, and the other was flat on his back.  As control of the wagon was lost, Carl was able to use the confusion to blast the helpless Kaufmann in the face with his Portal Glove! 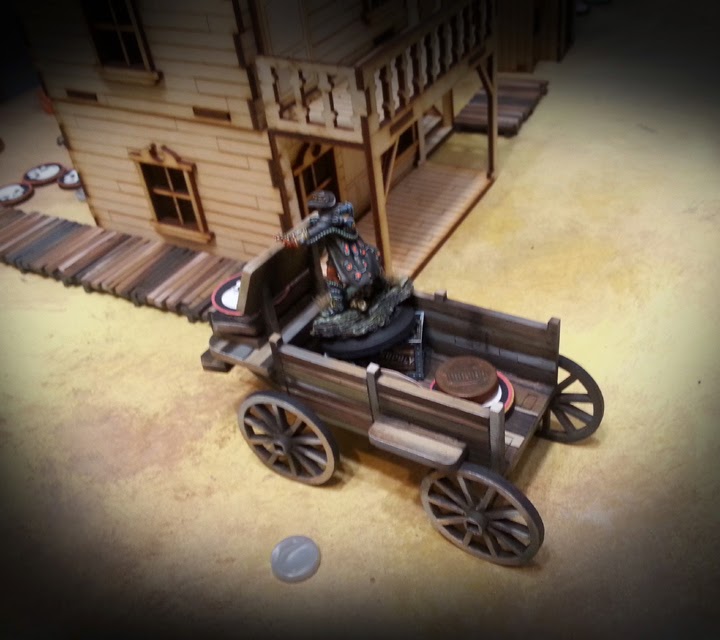 While disaster had been averted by the narrowest of margins with the RJ-1027 in the wagon, the Enlightened were establishing even tighter control over the pile in the southwest.

Jake Freeman was the sole Lawman standing against them.  He held out as long as he could, fighting hideous, blasphemous animations, and Long Tree! 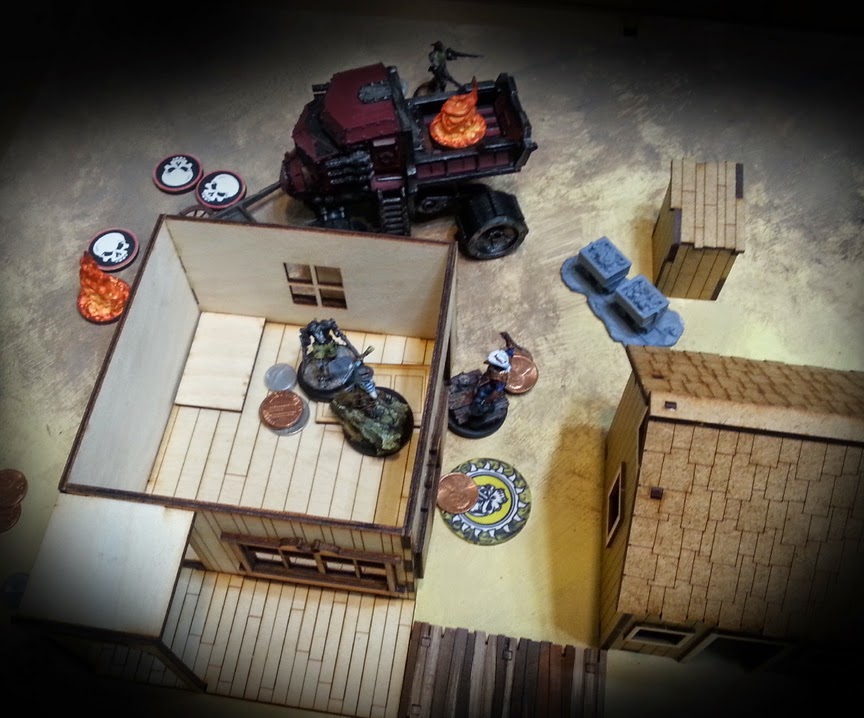 He also fell, which left the Copelie Sisters to remove the cover of the intervening structures.

Again, the citizens of Wappelville had become all too familiar with the destruction of their dwellings and businesses.

Mysteriously, Long Tree was unharmed in the conflagration which followed.  That Dark Council member seemed to be even more interested in the Bad Medicine of the quack doctor. 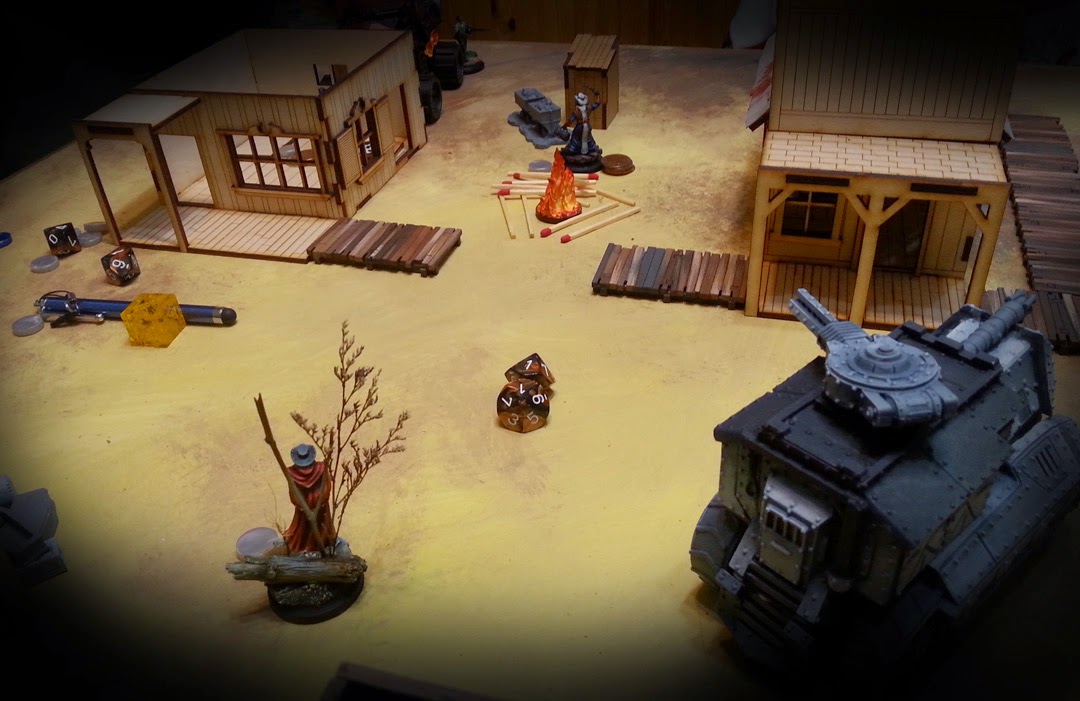 All the firepower of the Sisters, and even the immobilized Judgement vehicle could not kill Long Tree, since he was 4 wounds above his starting level!  Bad Medicine indeed. 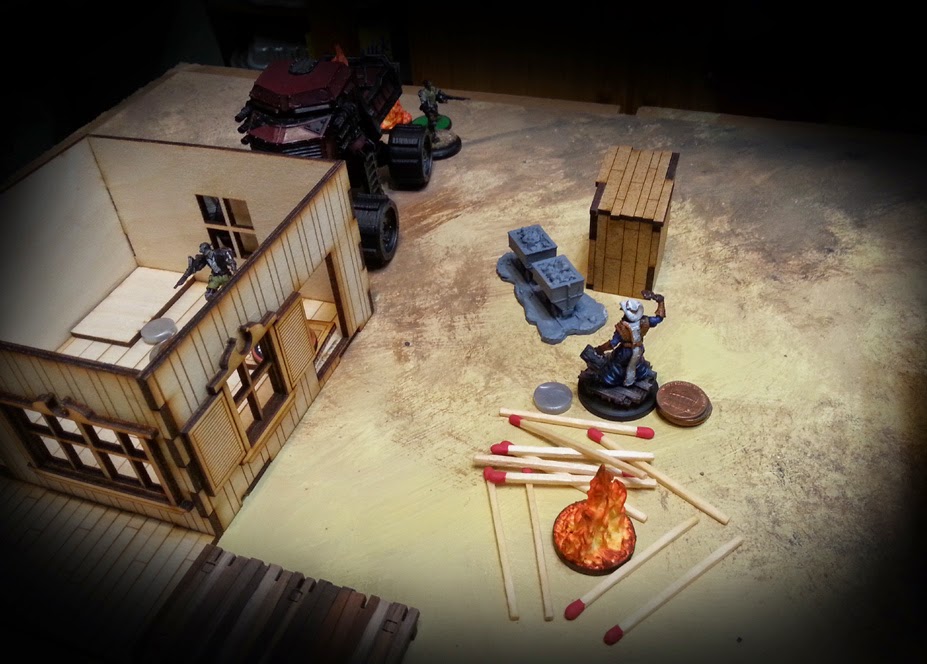 As the driverless wagon veered ever closer to the Saloon, both Vlad and Carpathian emerged from their hideout.  Vlad caught the valiant Carl Fredrickson in his sights, and took him down.

Fortunately, Virgil was nearby, and he was able to catch up to the wagon and climb aboard.

This left Carpathian with one choice... to target the wagon, and hope that it would survive as it had when Virgil did that very thing!

The power of his weapon was just too much, and the battered wagon was no more.

There would be no great explosion of the RJ-1027... which was eventually attributed to the Dark Council. 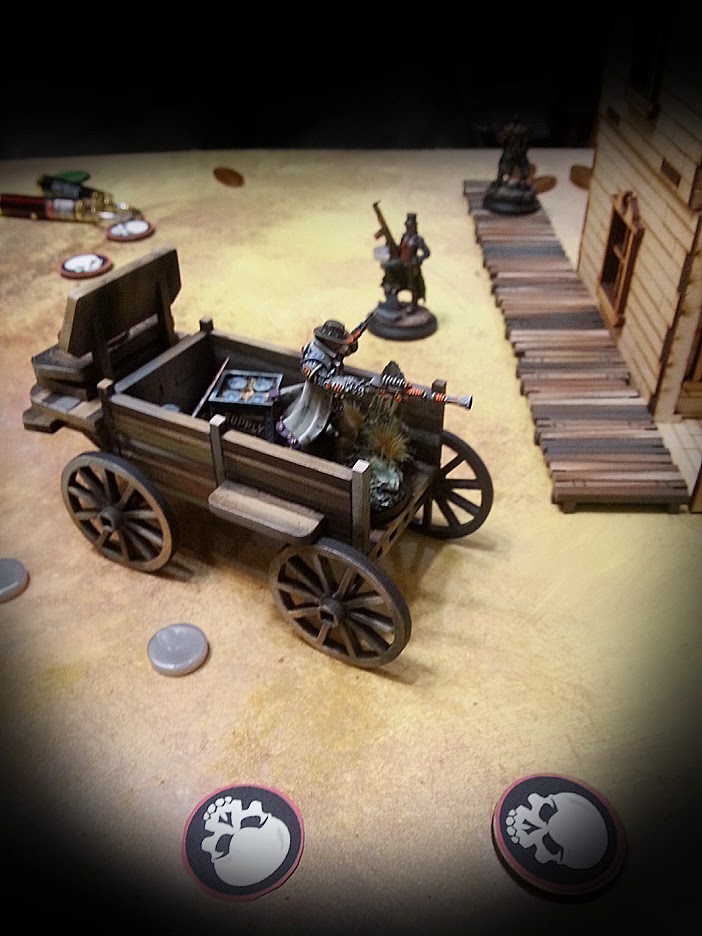 Saving a town from a horde of monstrous abominations really makes you work up an appetite, so Chef Babo fired up his stove and cooked up some beans for the Lawmen.

The subsequent explosions had nothing to do with unstable RJ-1027. 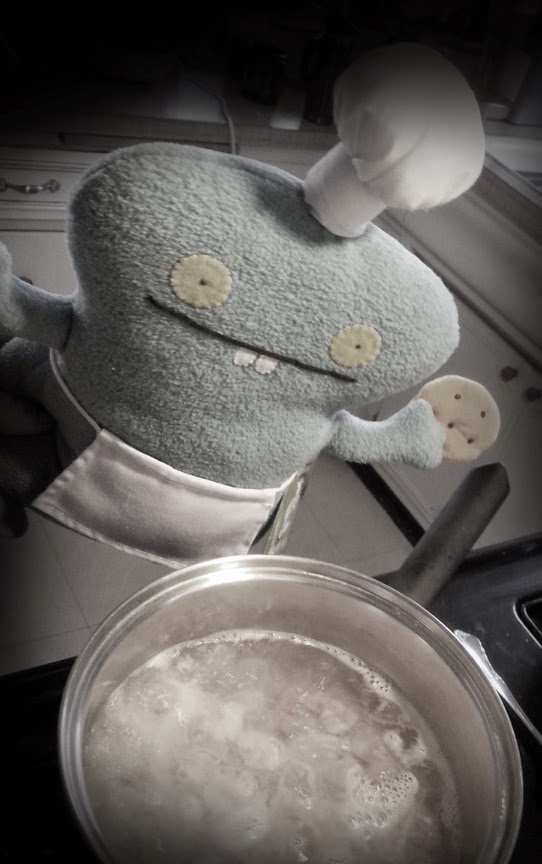 In the final analysis, the Copelie Sisters and their K-9 pets were crucial.  Their long range firepower was able to keep the advance of the Enlightened in the southwest corner under control, and Hercules stunned everyone by killing Edison.

These mysterious fellows will probably be sighted again in Wappelville, but one never knows what their true intentions are.  They are fickle dance partners for sure!!! 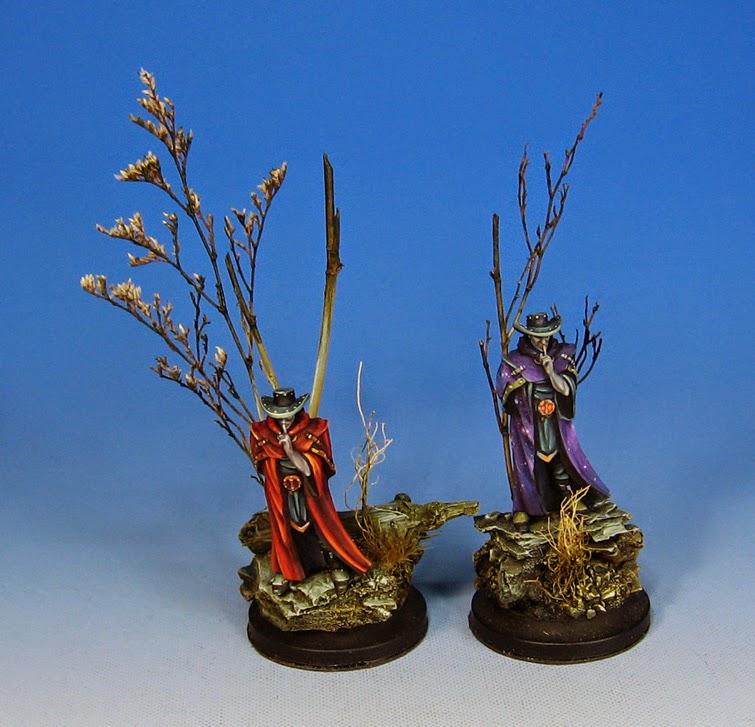 The Earps did exactly what they intended.  Claim the Power station, and keep Carpathian and Vlad from having any influence over the rest of the battlefield. 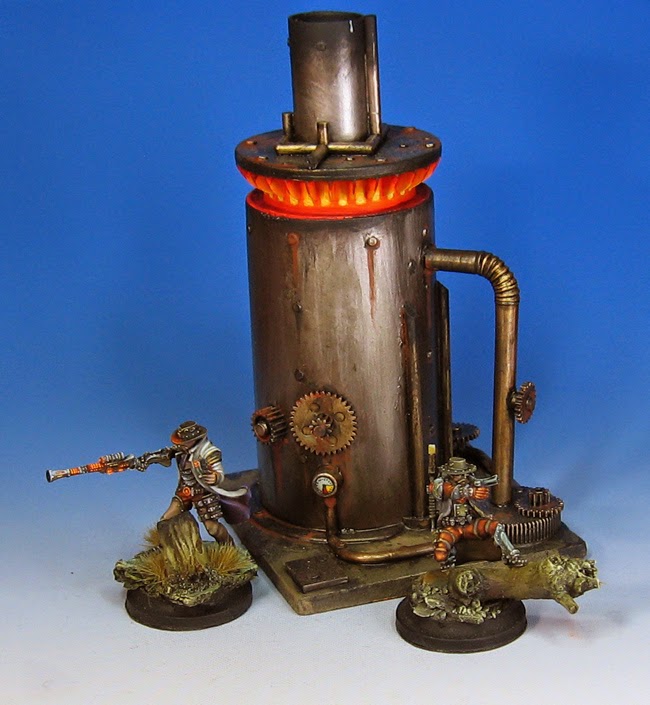 But lest we forget, Carl Fredrickon's heroic sacrifice was the turning point in what seemed certain catastrophe.  He will be missed... or will he?  Is it possible that he used his Portal Glove to find a safer location than the center of Carpathian's blast template?

We may just see him again, in case the Outlaws attempt to free Billie from the Jailhouse. 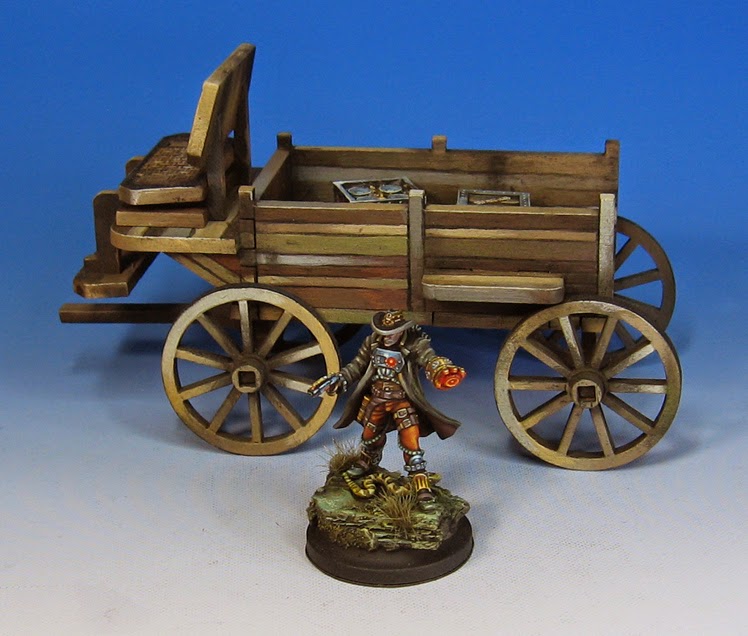