The Reclamation Project, Part One 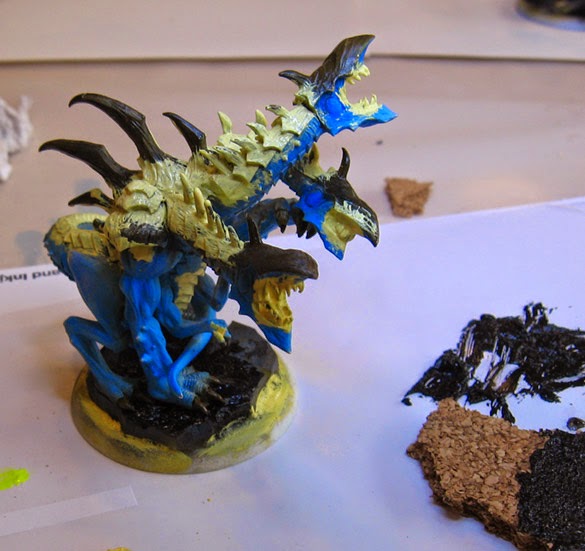 I think we all run across that time where a miniature (or even an army) does not quite work out according to the original plan.  Sometimes it just turns against us!

Usually, people either toss the stuff in a vat of Simple Green, or set it aside and leave it there for quite some time.  It does not have to be this way!

While at Screaming Heretic Con '14 this weekend, Joe had such a situation with his Legion of Everblight.  A very cool (and hot) plan, that went a little sideways.

When I asked him what his next step would be, stripping the paint off was the declaration.

Instead, we would work with what was already there.  We began by adding some black lava to the bases, to create a certain effect we would be doing once the figures were reclaimed. 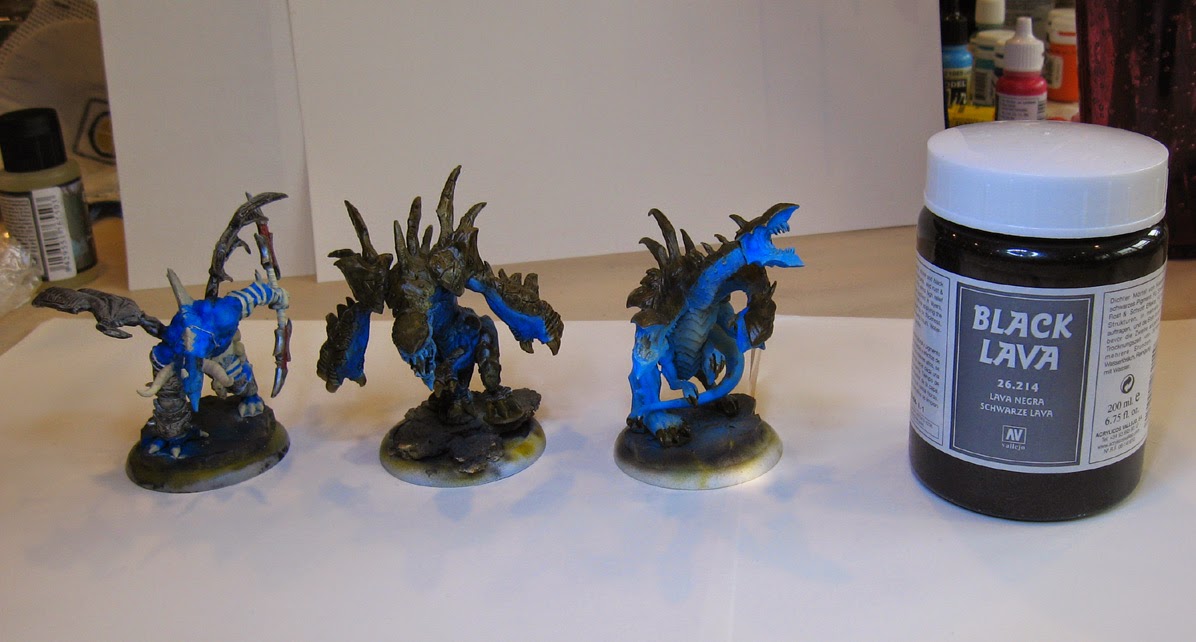 We did a test to see how it might work... 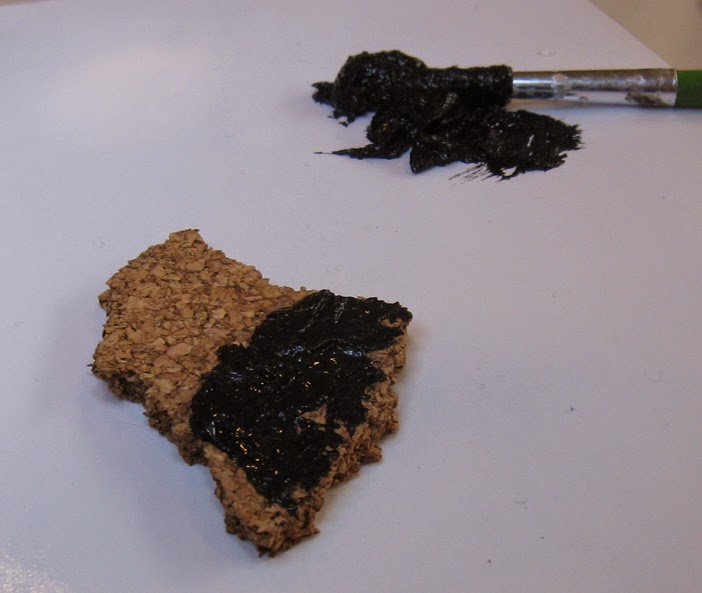 The black lava was applied... and while it dried, I started reworking the colors on the figure.

He wanted the carapace to look as if it was cooling lava, which I thought would be very fun!!! 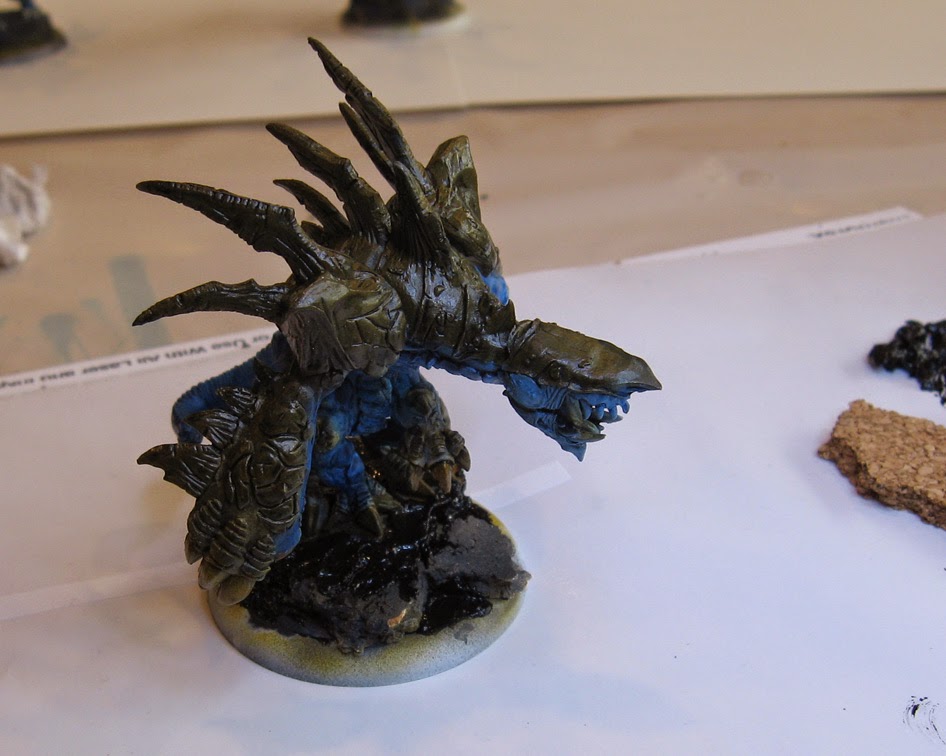 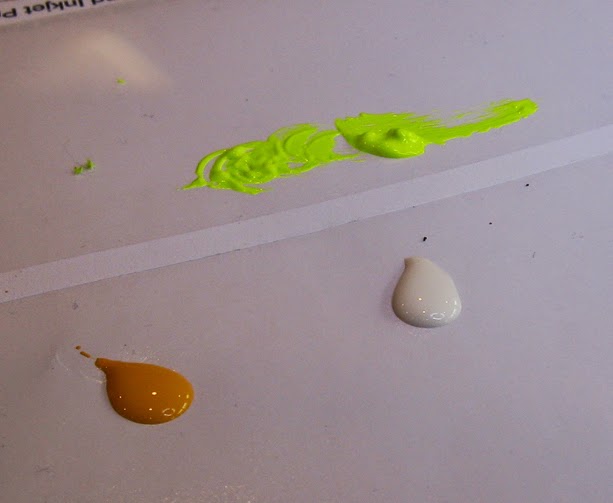 I took a beat up craft brush, and started jamming that light color down into all the crevices. 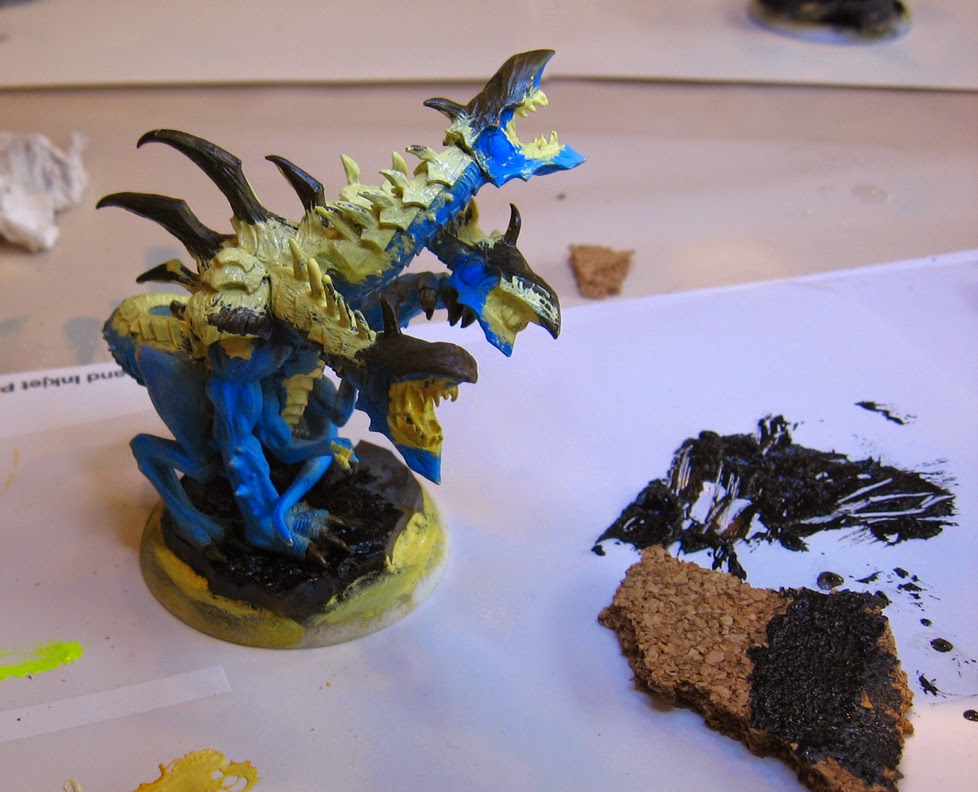 It took a little while to do that to all three of them! 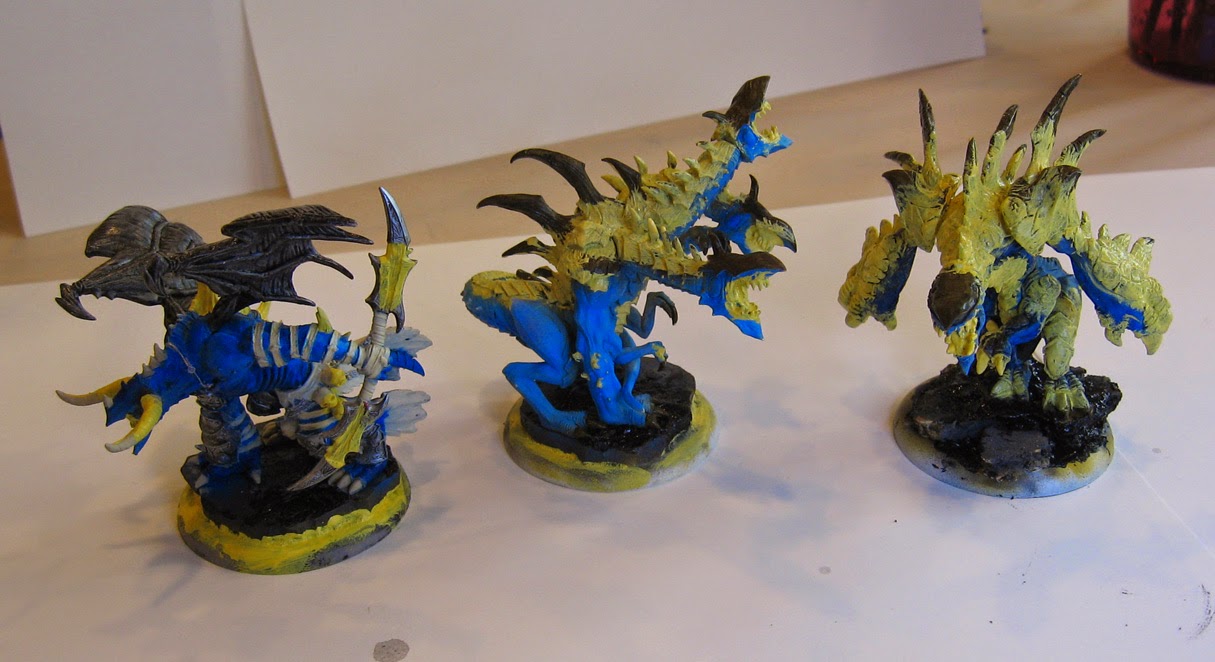 Once that was complete, some of the fluorescent orange was added, going over the top of the lightest yellow. 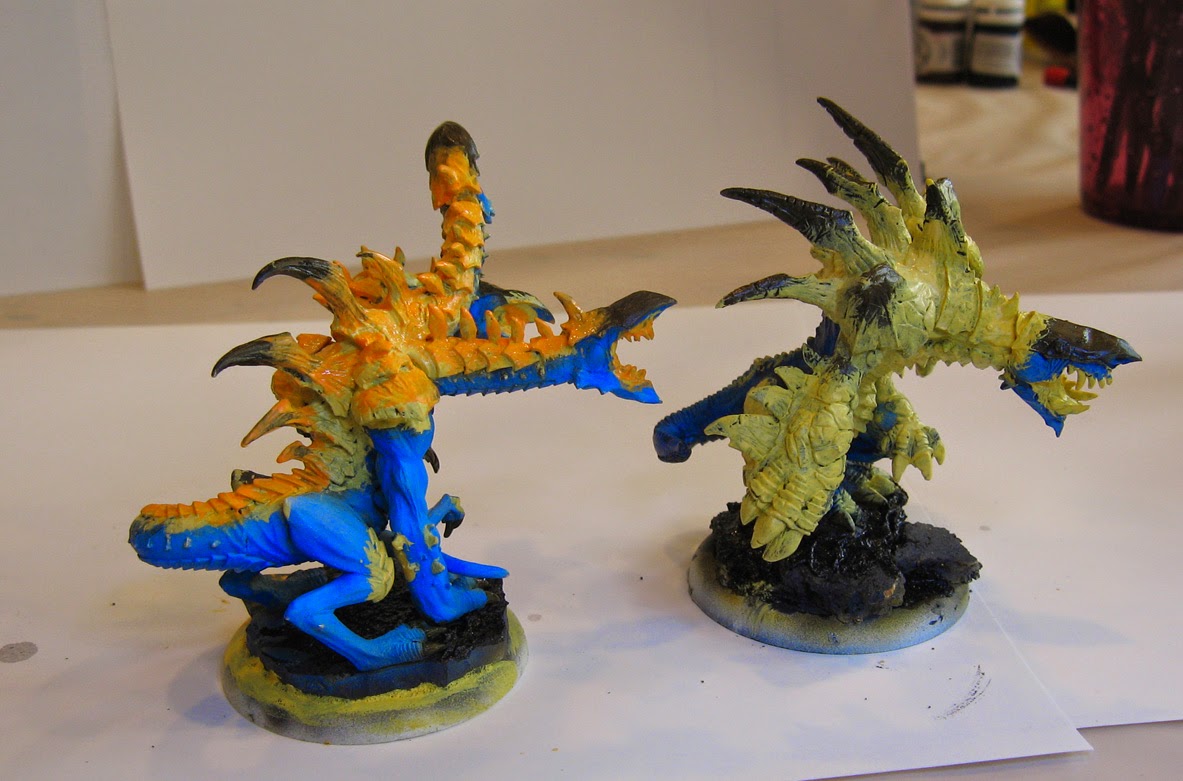 Again, doing this on all three absorbed a lot of time.

At this point, I was even starting to add in a tiny bit of reddish brown.  You can see the difference already! 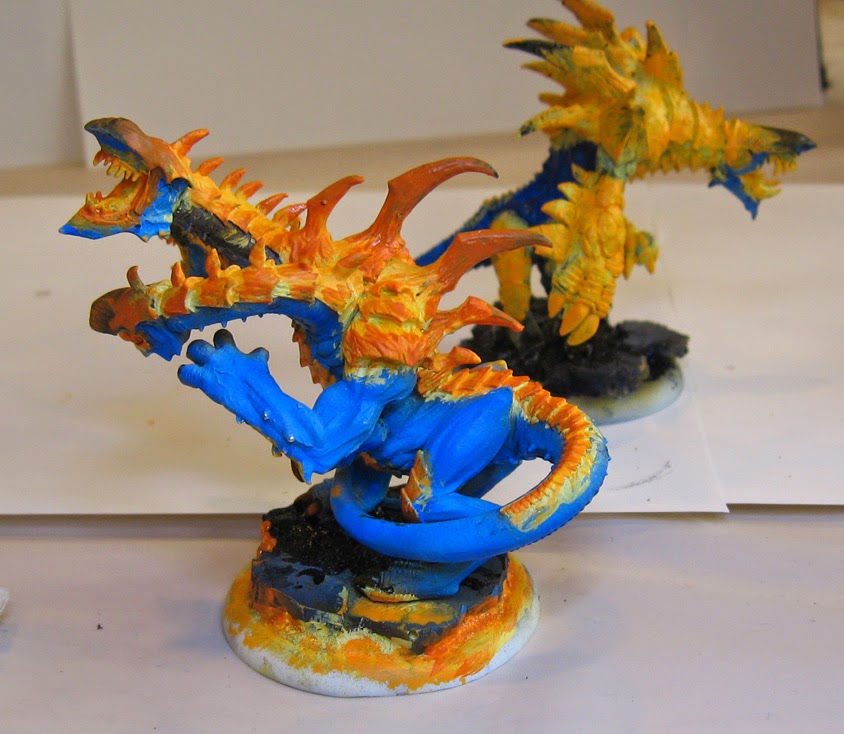 Then it had to be done to all the figures...

Even more of the reddish brown is applied, and you can really see in this comparison shot. 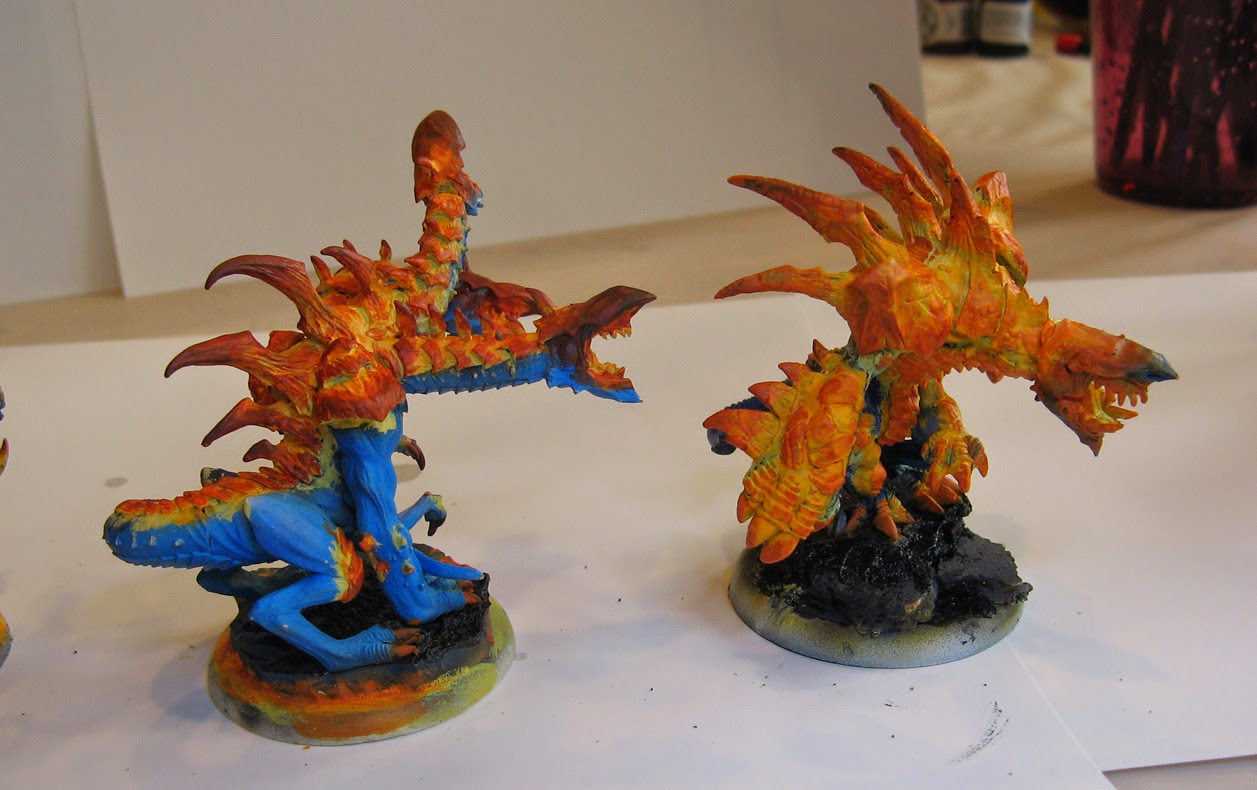 I began to add a dark blue-gray to the mix, which is where the whole "cooling lava" effect will stem from. 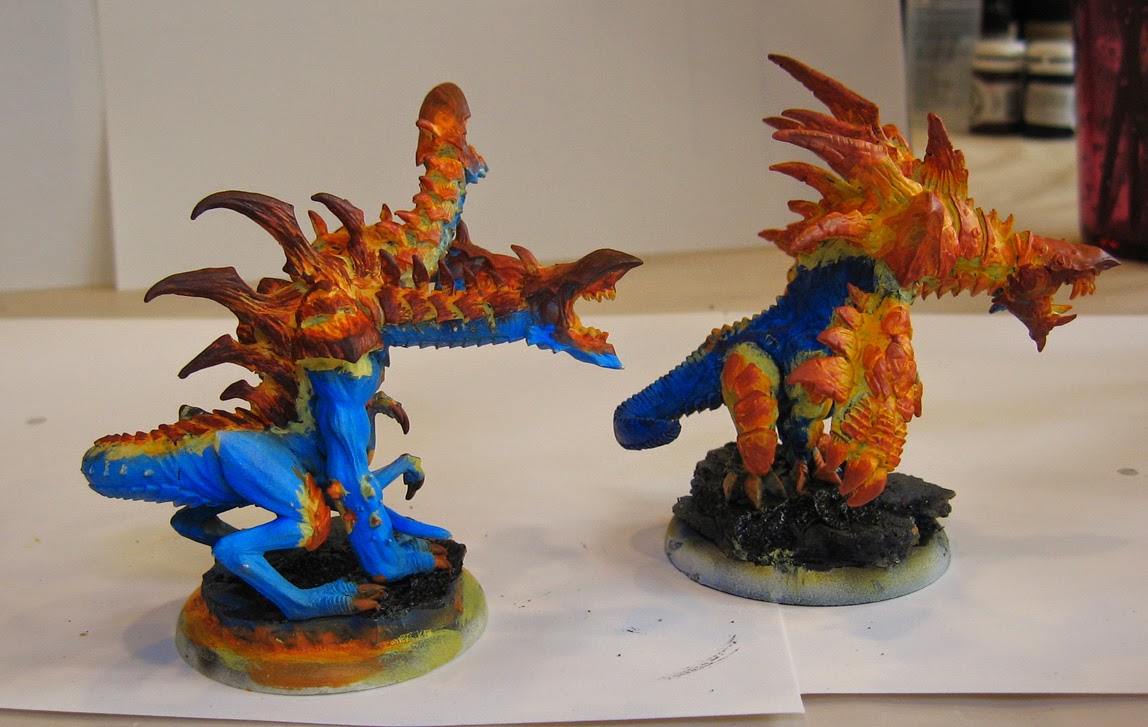 Both warbeasts getting cooler and cooler! 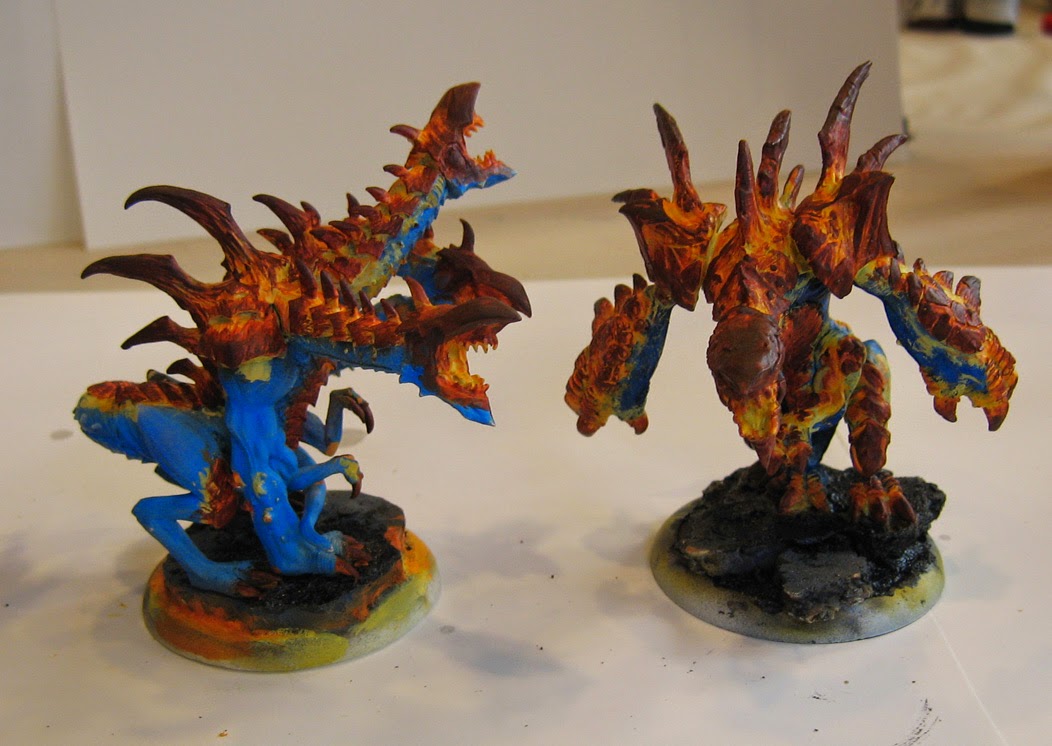 Then on to all three.  Once we had this effect mostly set, it would be time to move on to the skin tones.  An even bigger challenge!!!  Stay Tuned!!!

Posted by wappellious at 2:36 PM 5 comments:

Sometimes it does work! 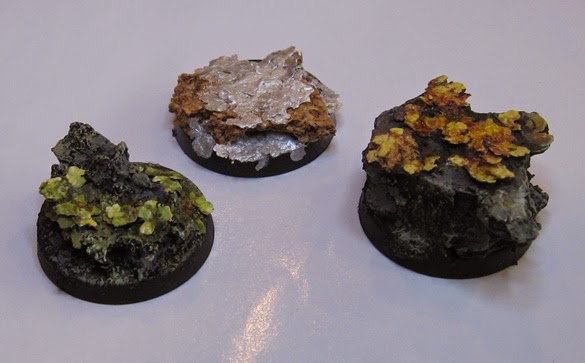 As you might recall, the grand experiment with the crackle medium didn't exactly go as planned.  Undeterred, the experimentation would continue... this time with a medium from Vallejo.

It is called Mica flakes, and that's precisely what it is.  Tiny flakes of mica suspended in the gel medium.

I noticed Scott using this for lava effects while at the big Screaming Heretic hobby fest.  As I looked at it, it made me think of piles of leaves, a very interesting forest ground cover! 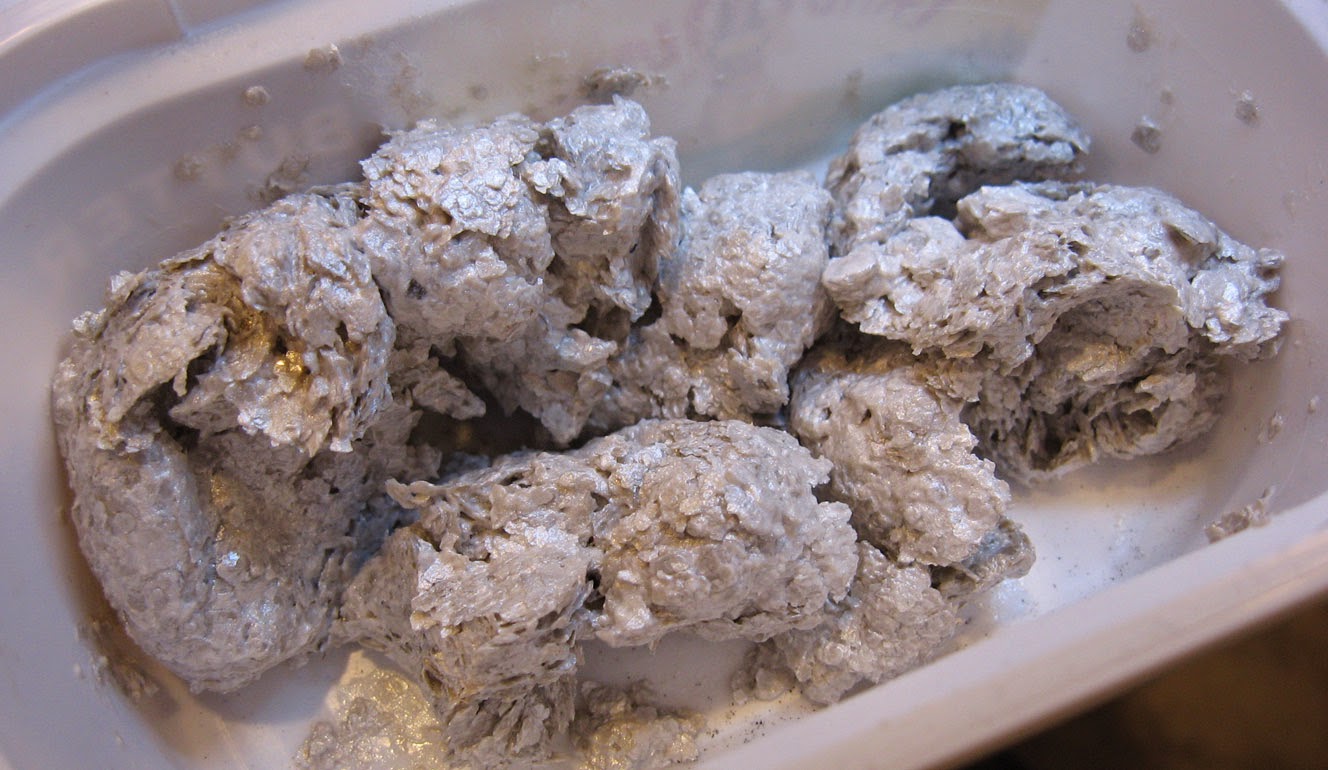 He was kind enough to lend me some to test.  Here is a close up shot... 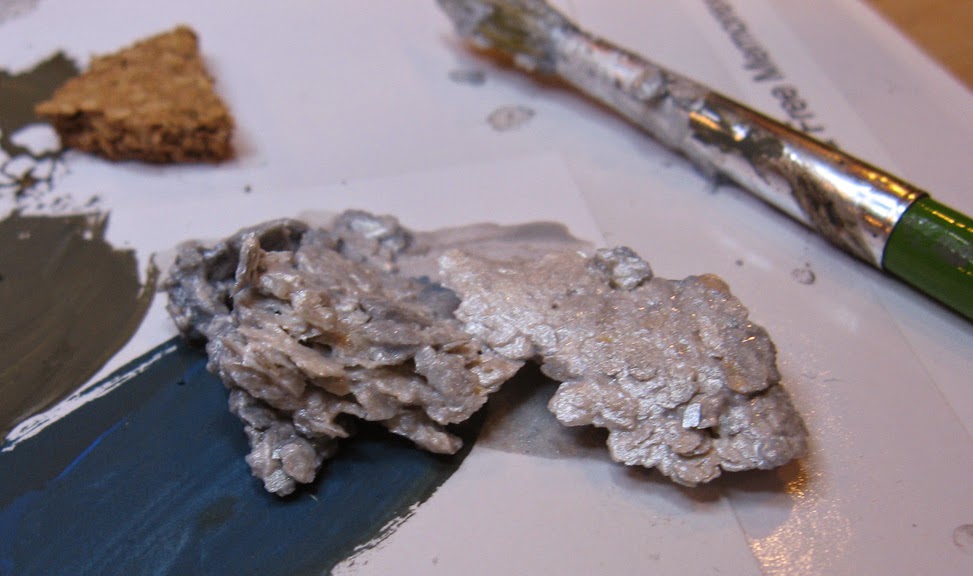 It is very interesting how you can manipulate and control it.  You have to use enough water to isolate the mica flakes, but not so much that you make the gel disintegrate completely.  That's what binds the whole thing together after all! 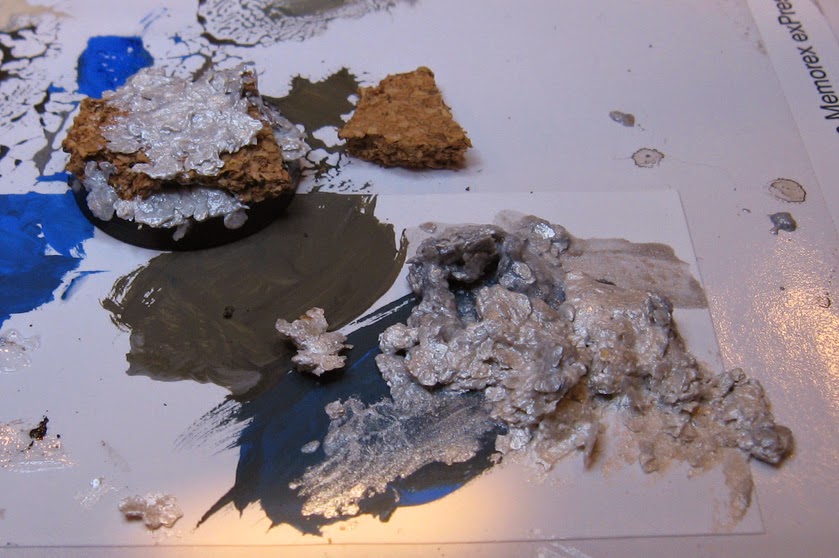 I used a few of the cork bases which I created during a mini basing demo the previous day.  Right off the bat, I was very happy with the effect. 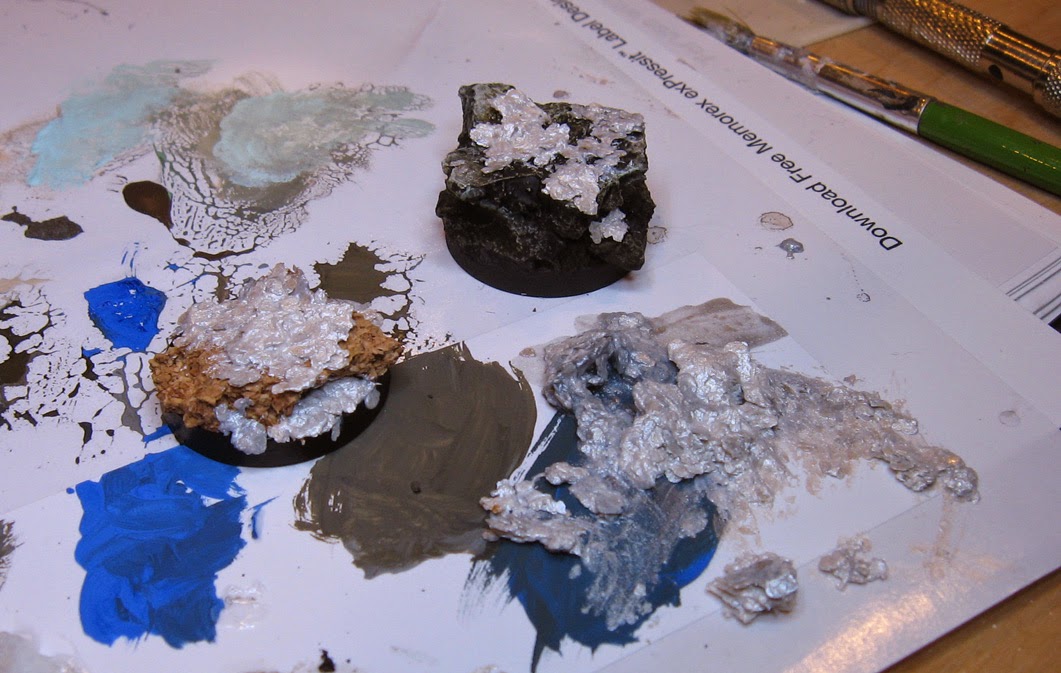 Here's a secret project that could really benefit if the overall effect did what I thought it would.  Don't tell anyone about it yet! ;-) 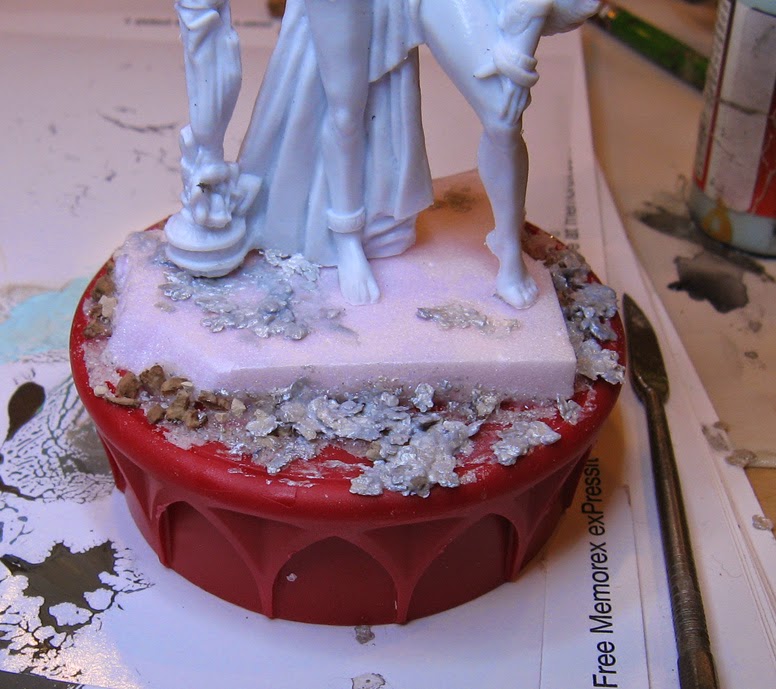 Nothing helps the mind focus and calm the nerves during an experiment like Canadian Maple Whiskey, eh? 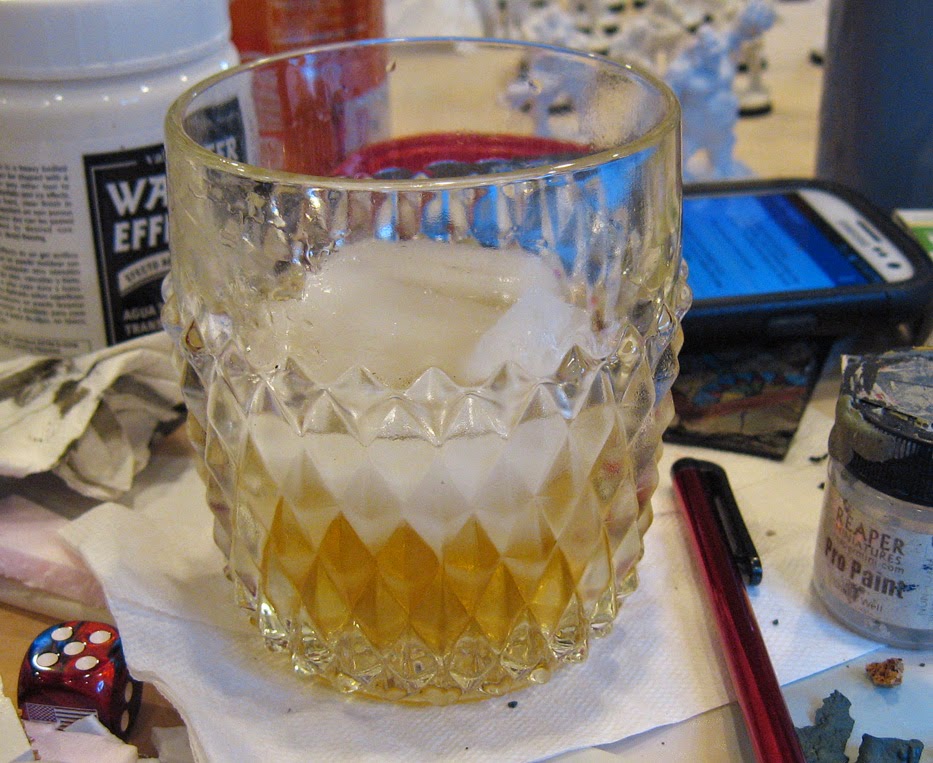 Now for the big show!  Would I be able to paint the leaves.  Here are my initial layers... 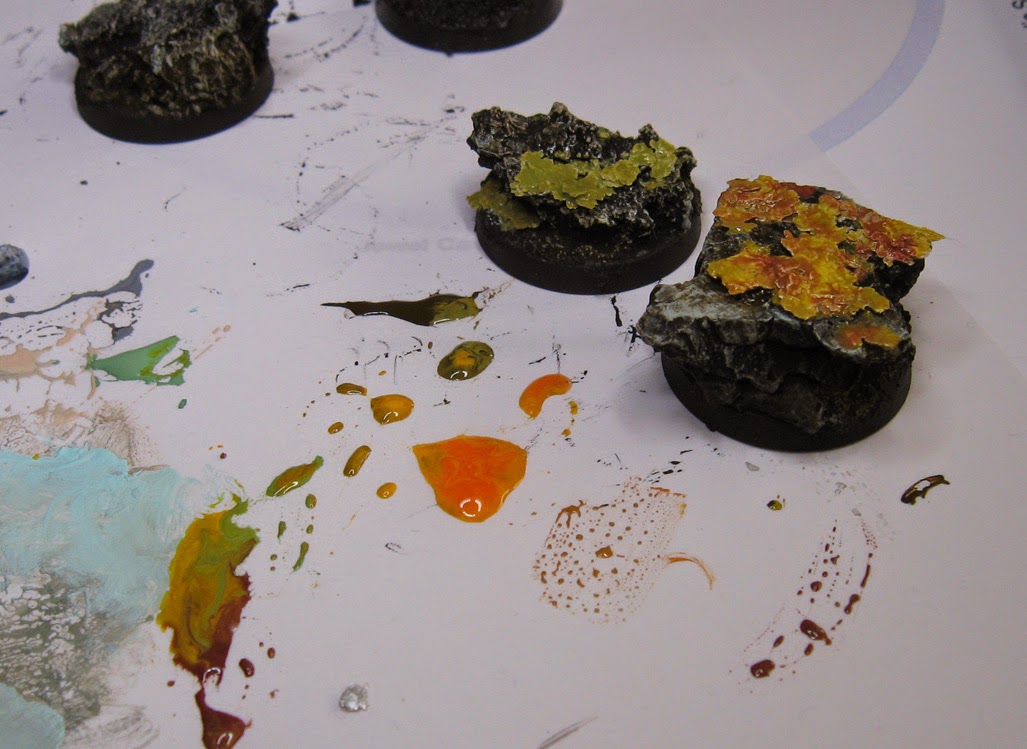 Even at this early stage, I could see that things were working according to plan.  I will, however, prime the mica flakes in the future prior to painting. 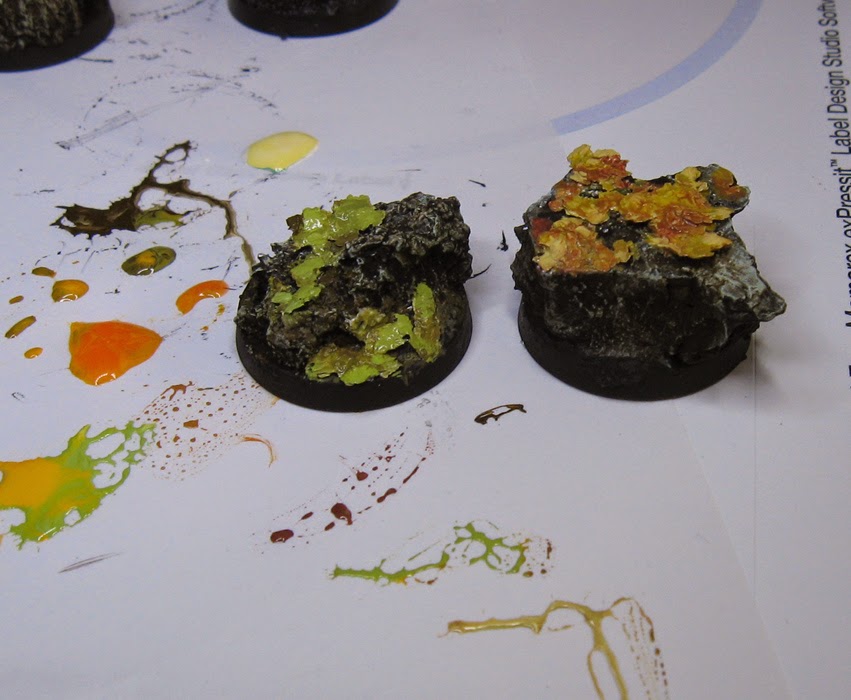 With all the light colors laid out across the leaves, it was time to begin working in some darker shades. 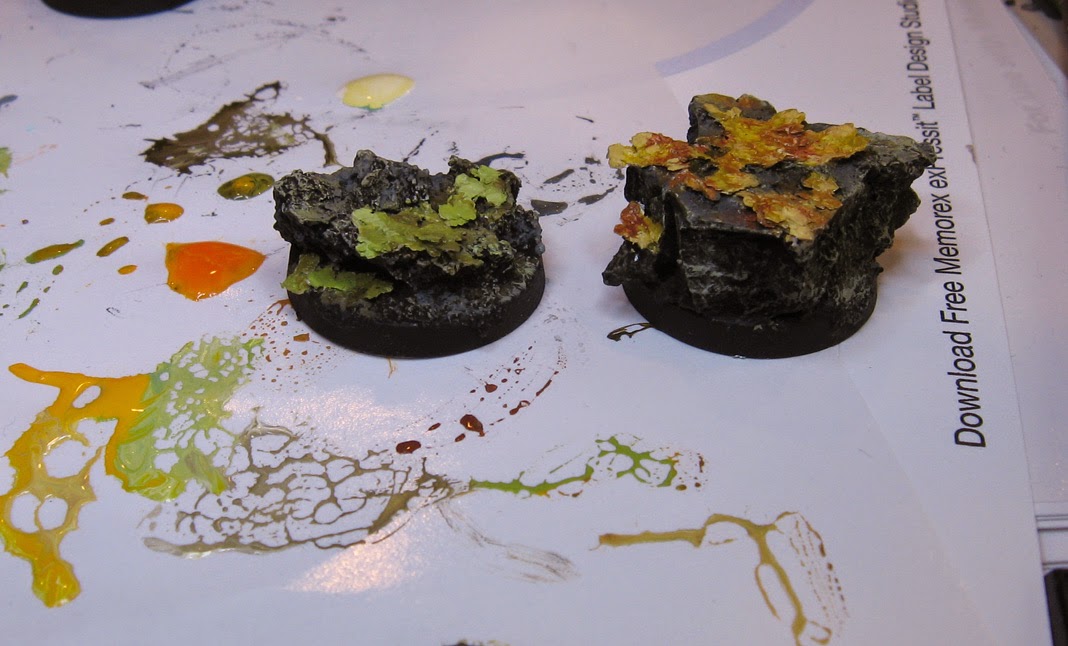 Once I did that, I was even happier.  It was really looking like leaves! Here's an image showing the painted bases next to the original mica and cork bases.

Success!!! Yes!  This is what was envisioned in my addled brain when I first saw the mica flakes.  Vindication is mine!

Many thanks to Jen and Joe and all the good folks at Screaming Heretic for hosting me, and letting me participate in some of their podcasting.  That was a ton of fun, and a lot was learned all around.  Be sure to check them out at Screaming Heretic.com!!! 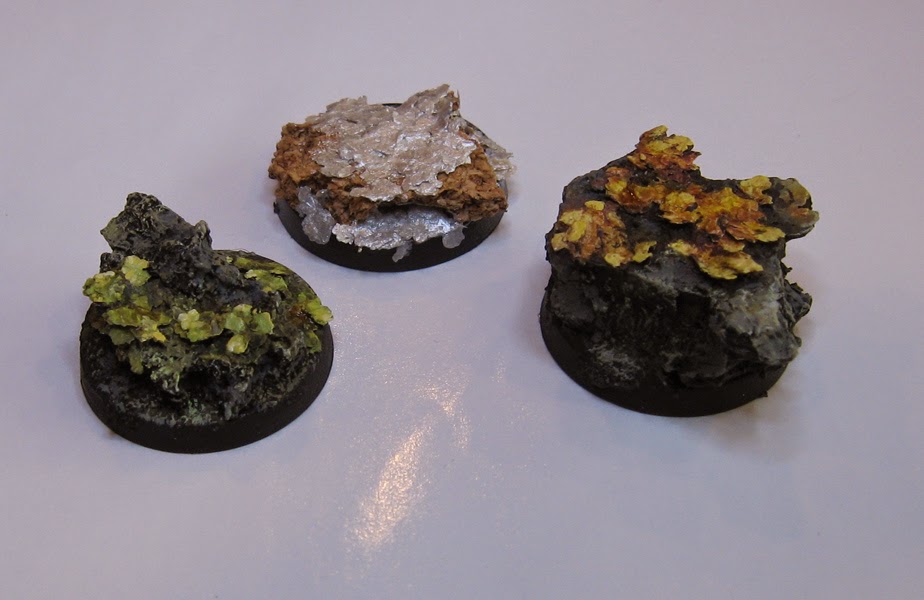 Posted by wappellious at 3:17 AM 4 comments: