The Grotesque squad starts to grow... 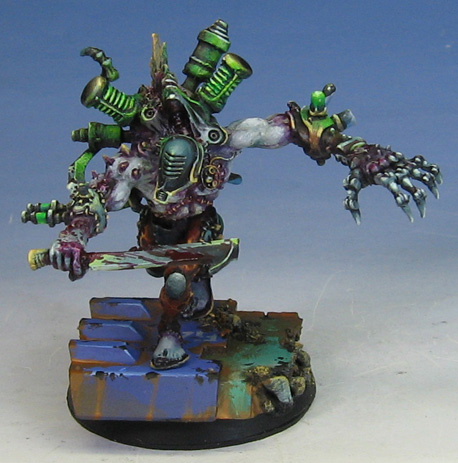 OK!  Here's our second grotesque.  I am trying to keep all of these roughly with the same set of colors.  The poses are so darn similar, and the casting was really nasty.  This one is one of the worst of the squad, with serious casting issues.

This figure has the standard close combat weapon.  I tried to do a few different things with colors... on the vials, tubes, etc.  Even the placement and amount of blood and gore.

The bases reflect the color scheme of the opposing space marine army.  Once I get to the Reavers and the vehicles, you will start to see some actual casualties on the bases, similar to the one on the big Chaos base I posted over the weekend.

The Reavers are supposed to be dueling with assault troops from this opposing force, a big part of the story behind this army.

Here's the first two Grotesques together!  Working on the Aberration now...  Stay tuned! 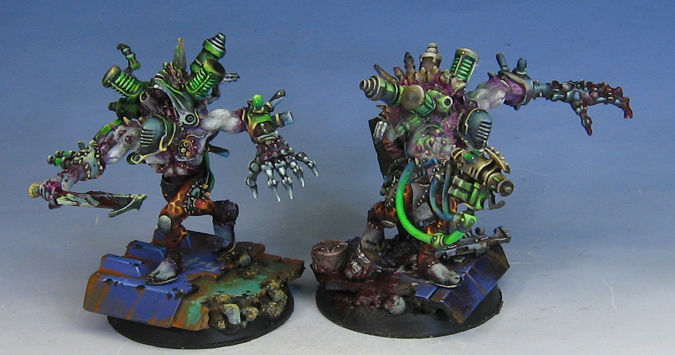 Posted by wappellious at 8:25 PM No comments:

Minis and Murals, an Ilyad diorama... 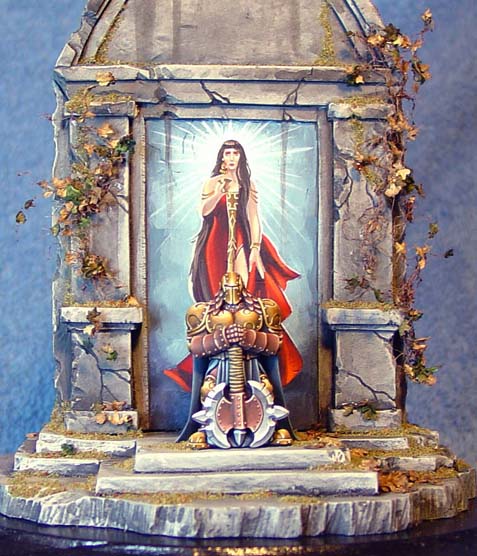 As I was preparing the new area for filming the painting videos, I ran across a few CD ROMs with backed up files on them.  I figured that I already had most of these somewhere else, but it turns out that it was a veritable treasure trove of 'lost' images!

Among the galleries I uncovered was a set of images I had been searching for for over a year to put on the blog!  All I had found before this was some tiny little images.  Here are the original images that I shot of one of my favorite dioramas.  It's a mural, which is so much fun to do in miniature! 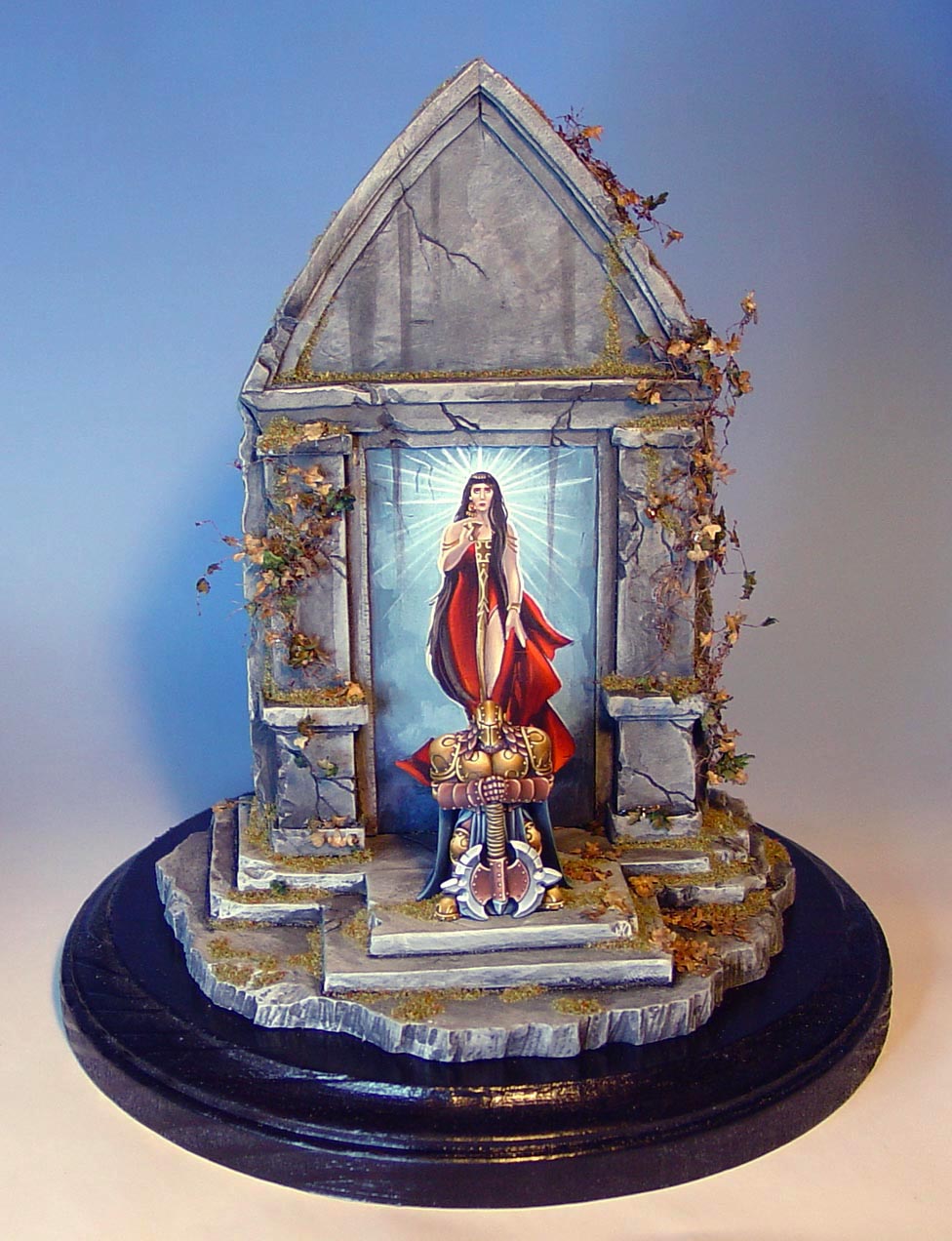 The figure itself is from Ilyad, and I will be posting some more images that show it a bit closer, and without the diorama.  As usual, this diorama was made with baked sculpey. 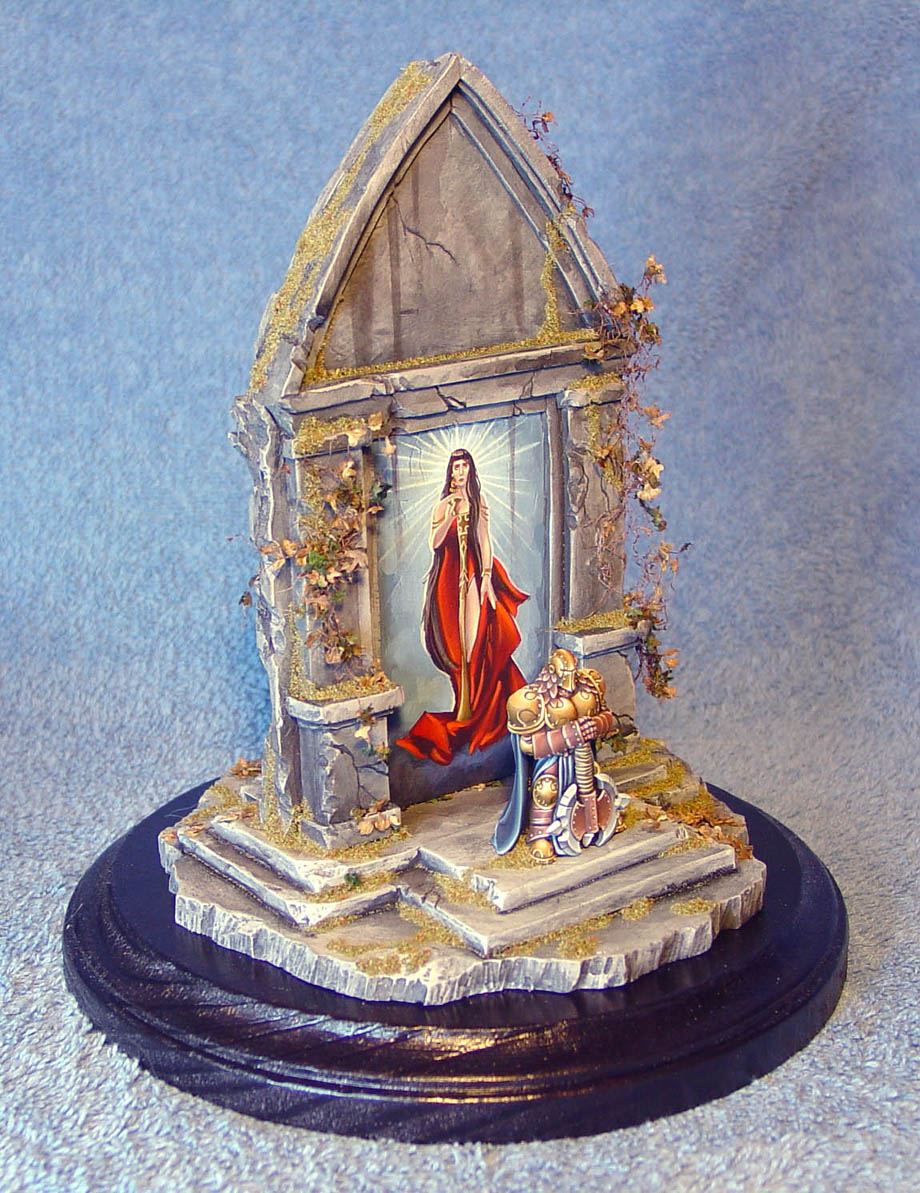 It was done in layers, like the lost shrine and the Anastasia dioramas.  I would do one layer, bake it, add some more decoration, bake it again, and so on. 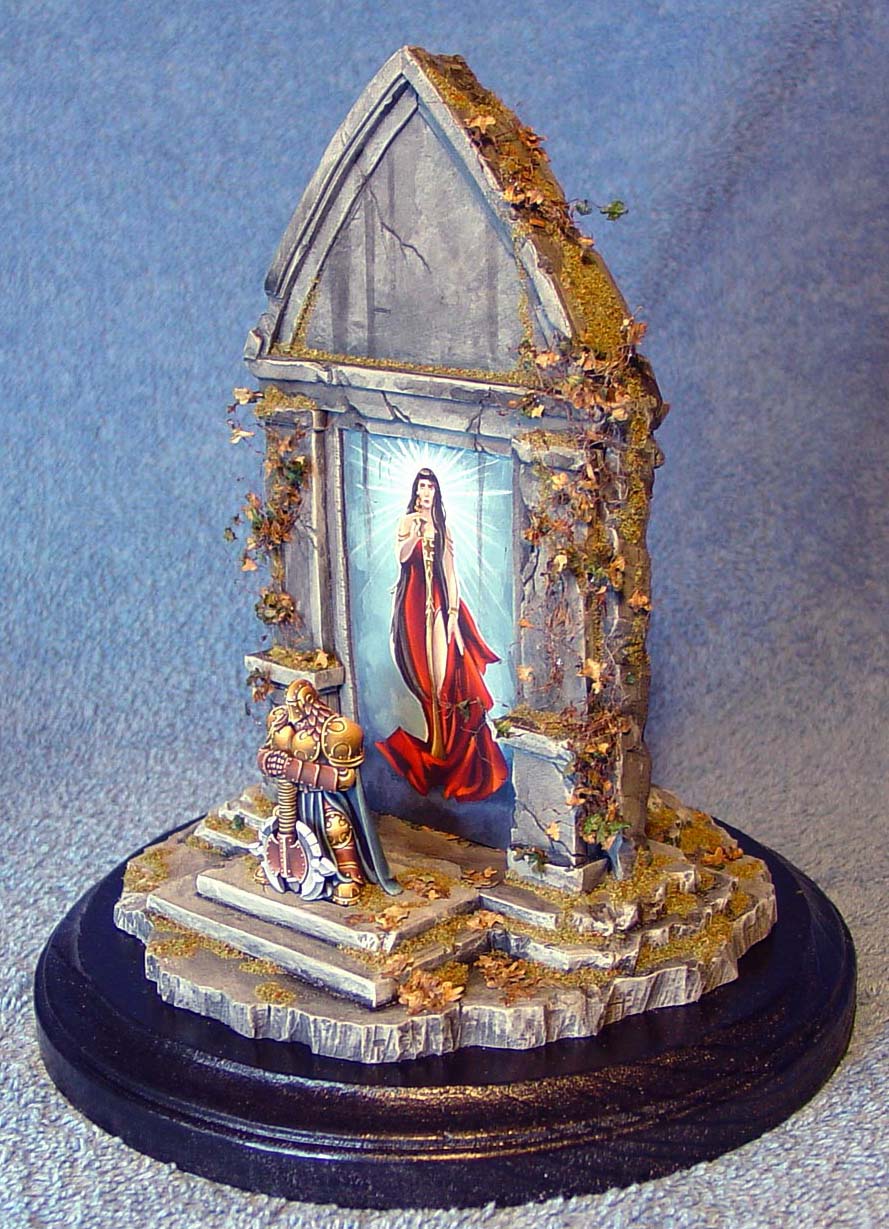 One all those layers and details were complete, I took some carving tools to it and chipped away! 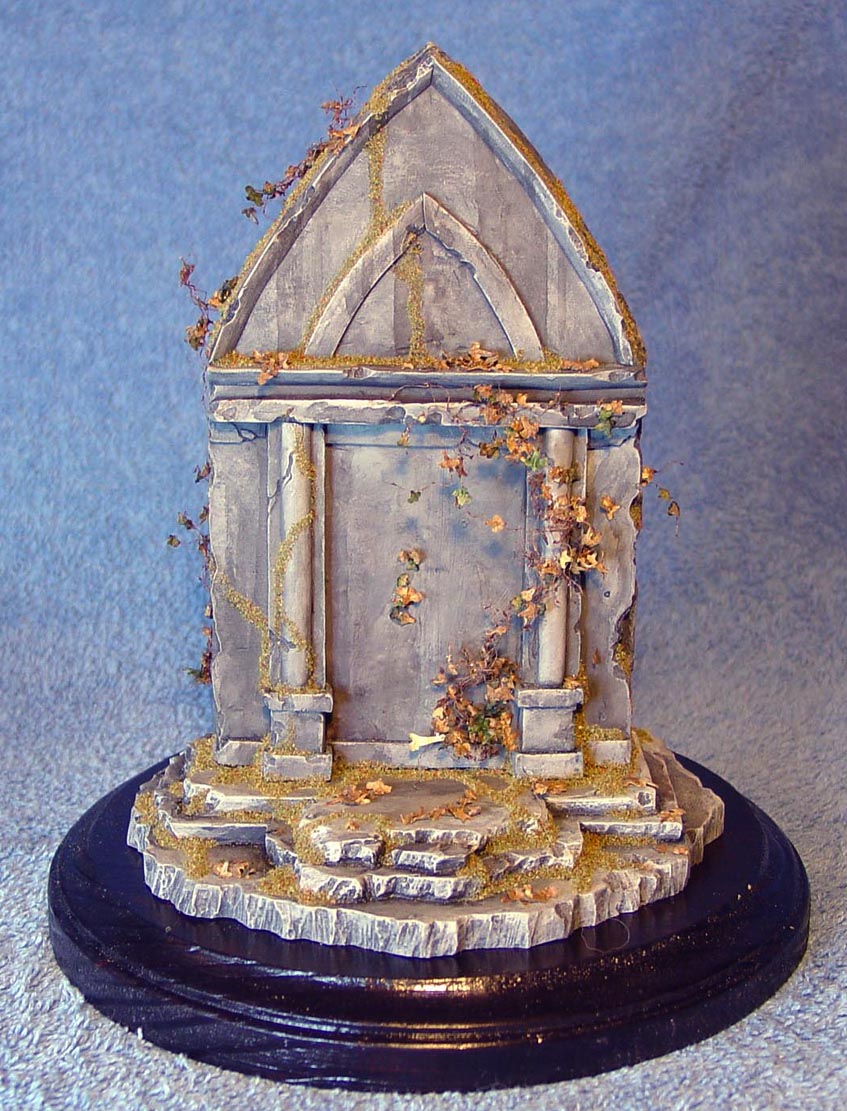 The vines are from Woodland scenics.  This is probably the best example of using that product.  It can be a little messy with the super glue, and you will get lots of stuff on your fingers in the process!  However, it really is worth it, as it truly looks like vines when you work it correctly. 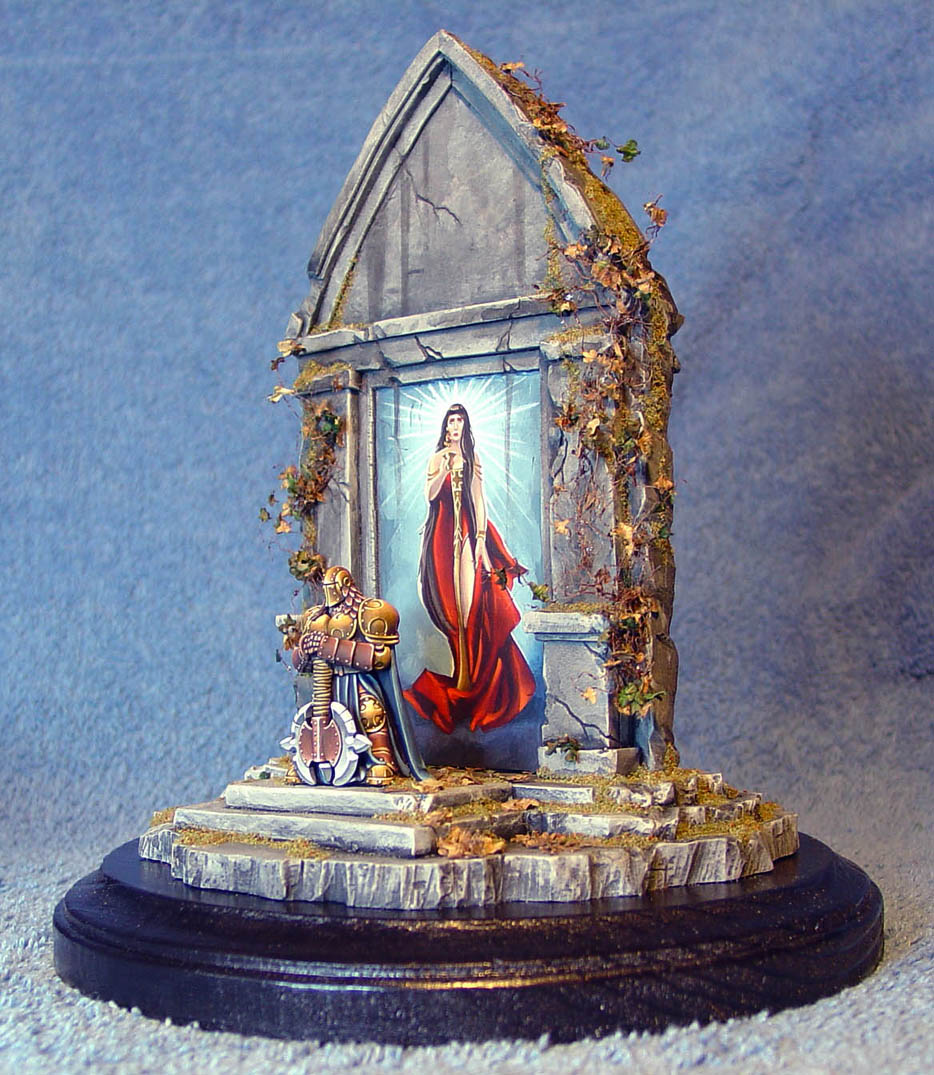 This view shows you a nice look at how it interacts with the terrain piece.  It's a two part medium.  You attach the vines first, and then glue the 'leaves' later.  That's where things can get a little messy. 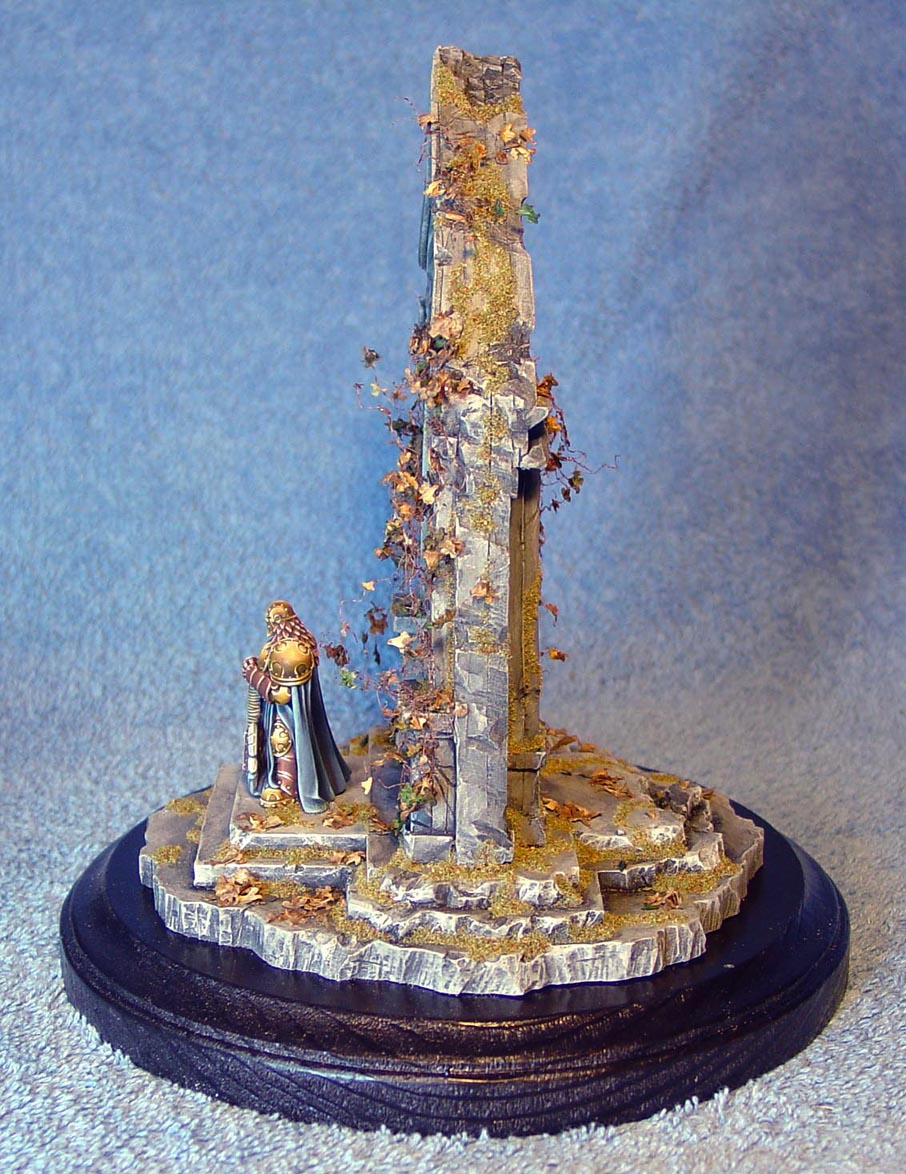 I would love to try something like this again using all the new weathering powders and pigments that I have now! 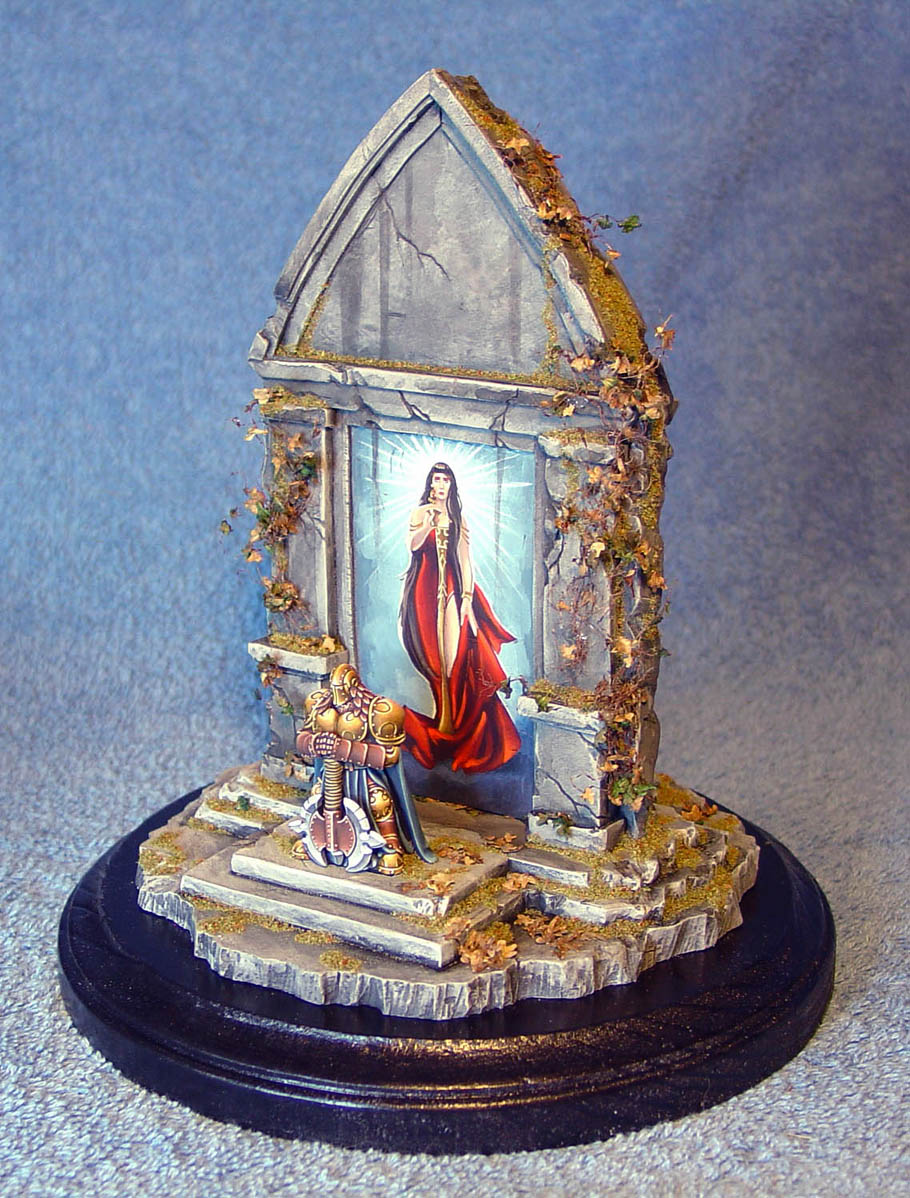 Perhaps I will try some things like this with the Raging Heroes figures... or some Kingdom Death figures... 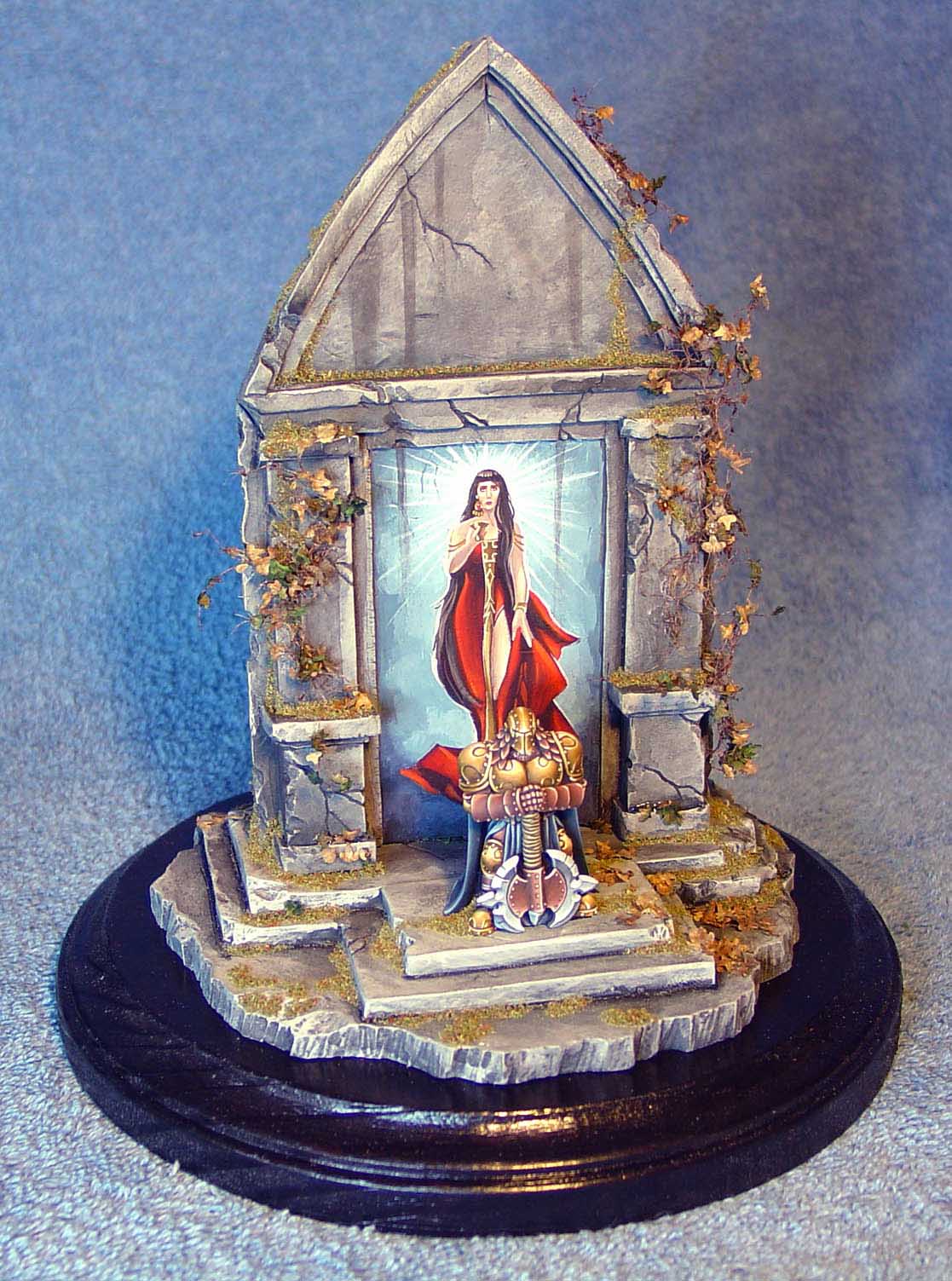 Here's a few images of the mural: 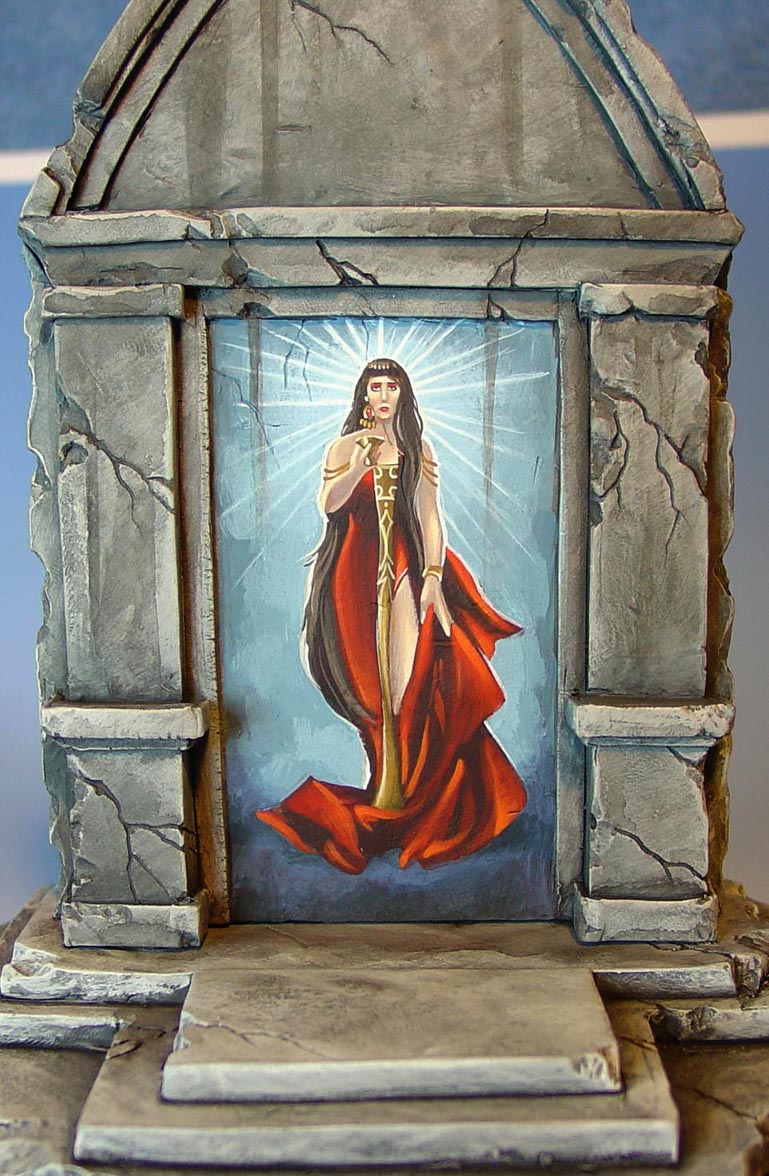 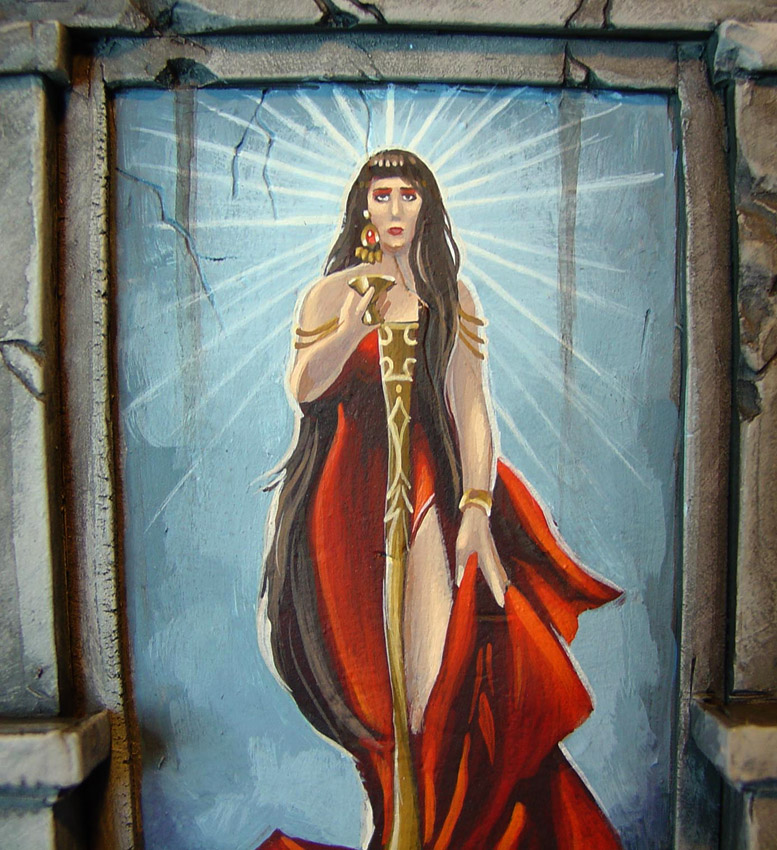 I will post the images of the figure later tonight!  Stay tuned! 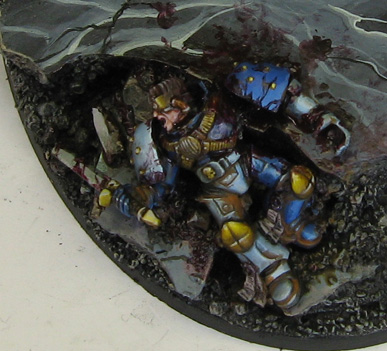 Here's the rest of the experiment, painting the casualty.  I put down a basic layer of blue, and then some light grey on the other 'half'.  Some ochre was placed in a few accent areas. 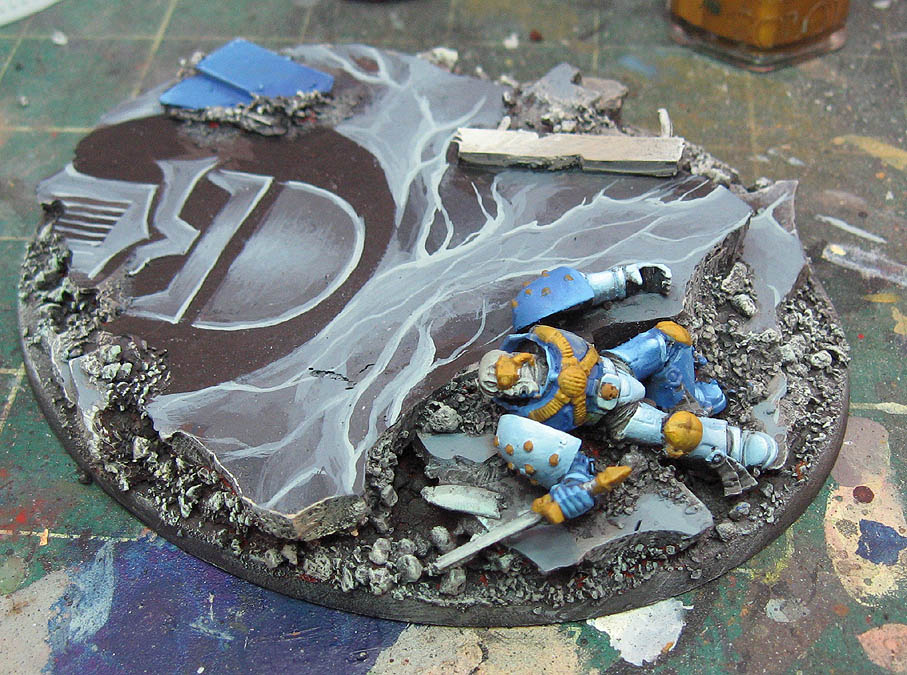 Along the lines of the 'Shaded Basecoat', I lightened the blue, the light grey and the ochre all the way to highlight levels. 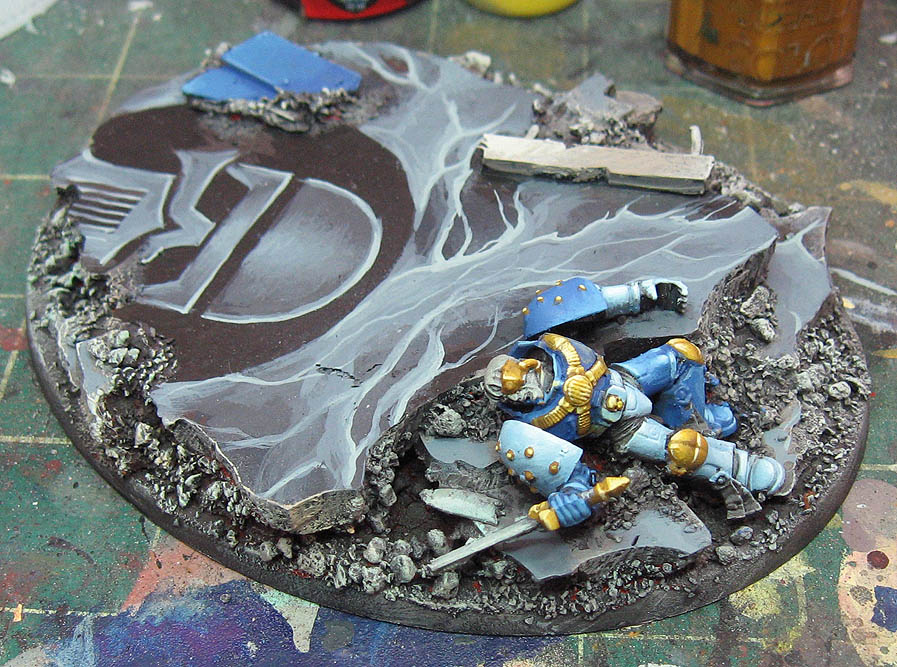 I put a little bit of fleshtone and some hair color on the casualty, using a bit of the darker hair color to restore some of the lines and shadows. 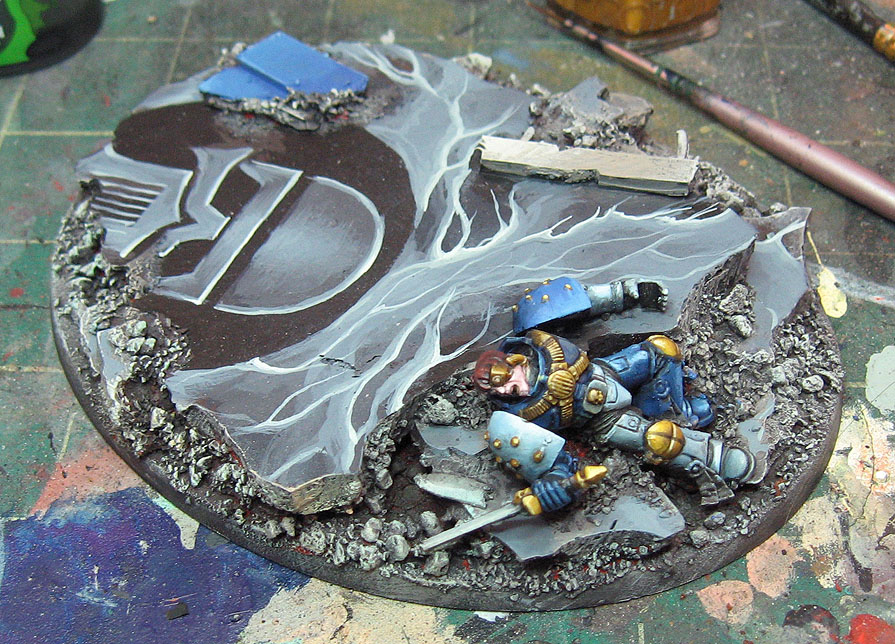 At this point, I started to do some glazing and shading of the rocks around the marble, as well as some of the debris.  I did the same on the casualty.  I didn't mind that the colors of the armor were dulled as a result, since that was a desired effect! 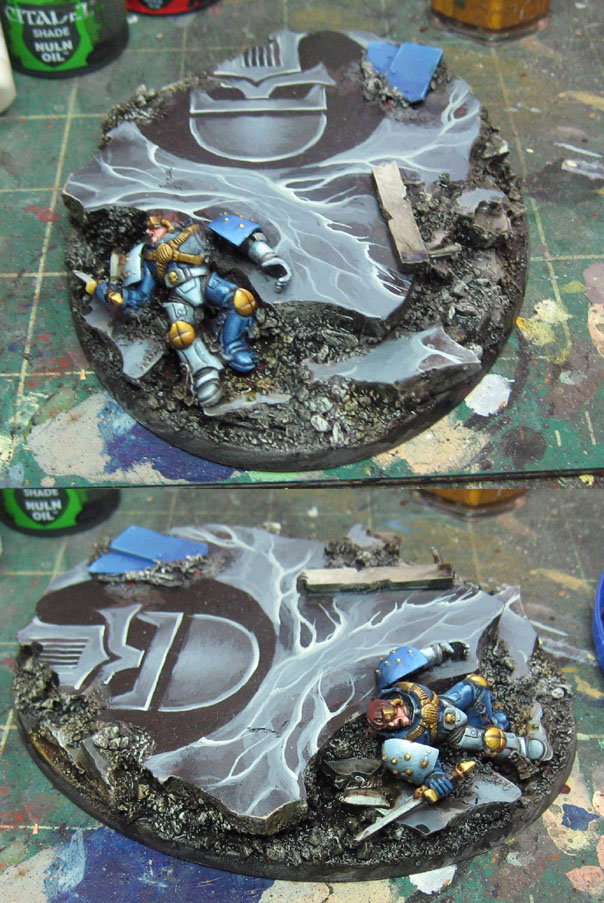 Can't have a casualty without blood and gore!  So, I mixed some Vallejo transparent red with Reaper brown liner into a batch of 'ardcoat.  This gave the 'blood' some shiny appearance, and also a bit of dimension, since the 'ardcoat is so thick. 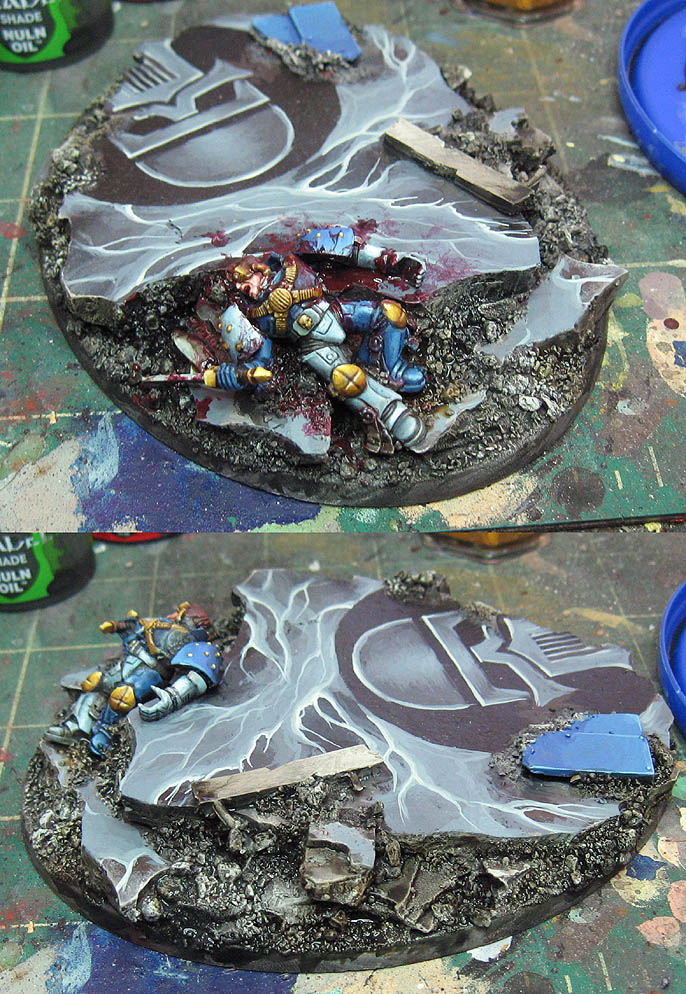 It's important to vary the lightness and darkness with the blood, as well as it's opaqueness. Try to create some smears, some pools, and so on.  I like to make the edges of the pools darker, which means mixing a bit more of the dark brown liner. 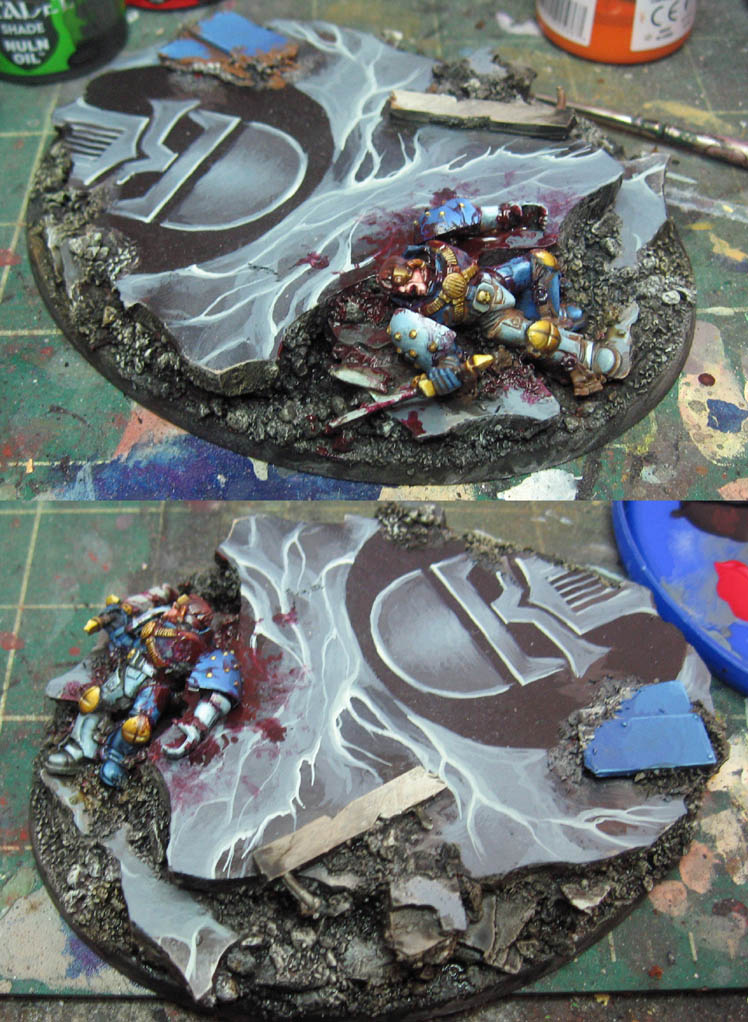 Almost there!  Time to do a few cracks on the marble, clean up a few details on the casualty, and create the rust. 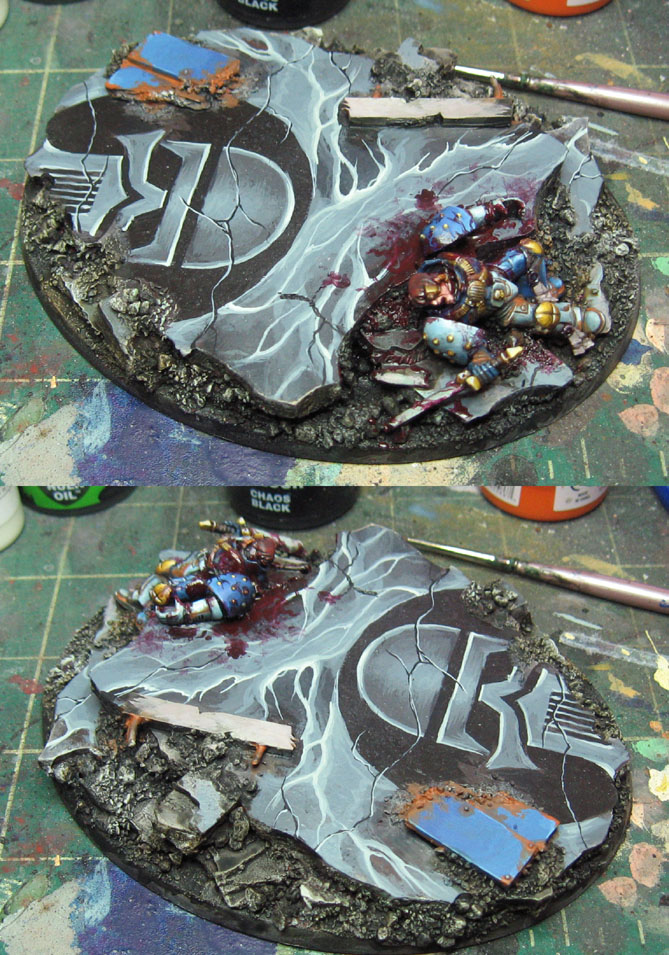 And the finished result. 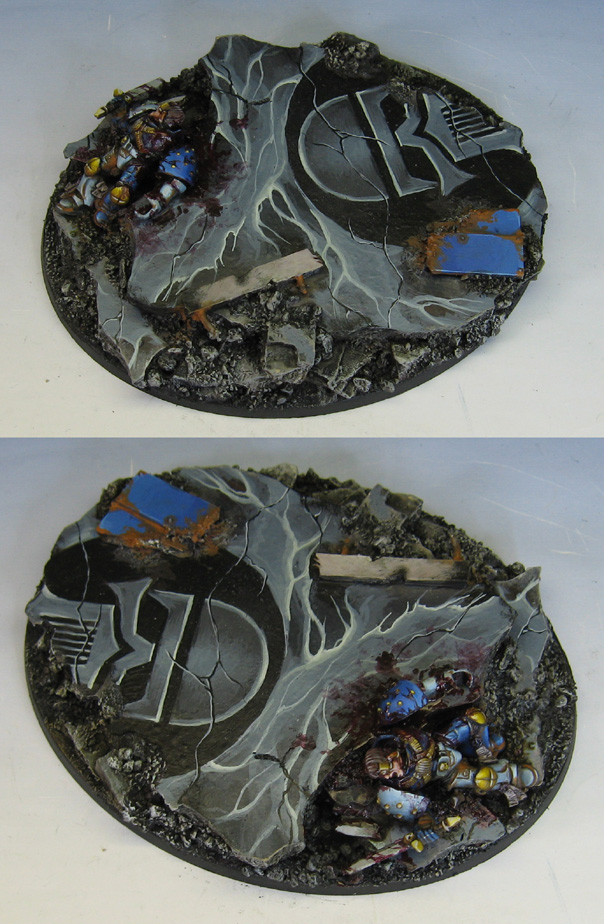 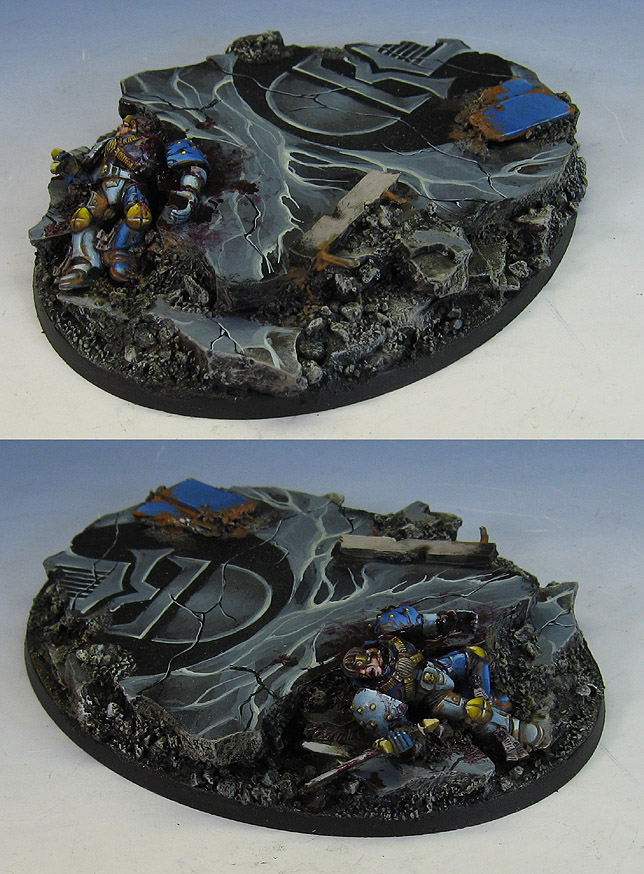 Both of the bases together. 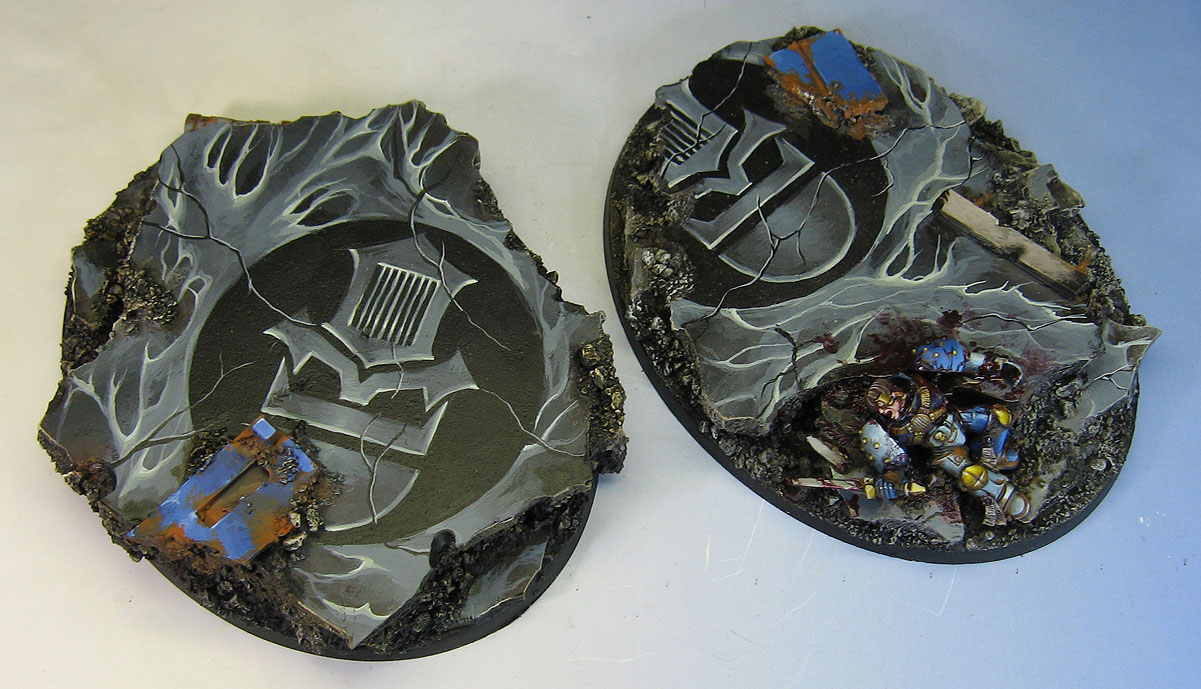 Posted by wappellious at 3:57 AM 6 comments: