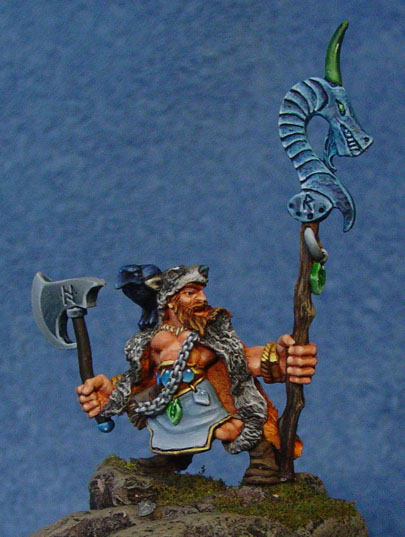 Here's one more vignette from Celtos.  The character is a dwarf named Ragnar Runecaster.  It was done with the same technique as the Cernunnos.  White sculpey was textured by pressing actual rocks into it prior to baking.

This allowed me to put one boulder on top of the other and build up the height of the formation.

I also sculpted the water texture with the sculpey.

Once it was baked and painted, I put some layers of gloss varnish over the water to give it some extra sparkle.

Some close ups of the mini...

I remember having lots of fun working with a whole range of blue/black colors on the raven the staff and the axe. 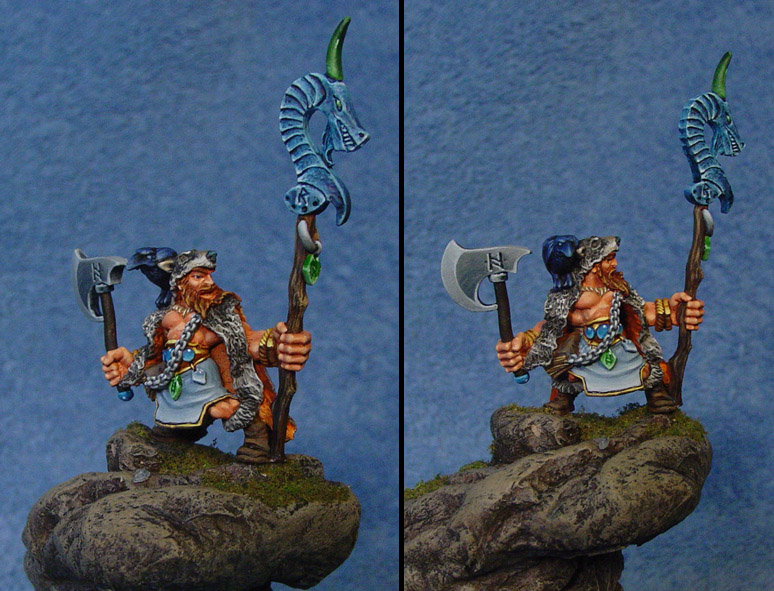 Posted by wappellious at 8:58 PM No comments: 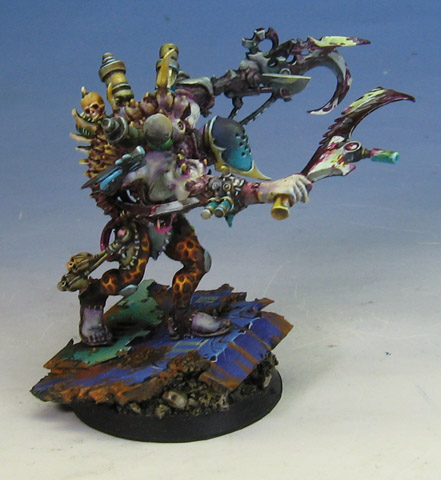 OK, you saw the step by step, now it's time for the finished views!!!

The views from above...

Everybody waiting for their Lucky Charms breakfast! 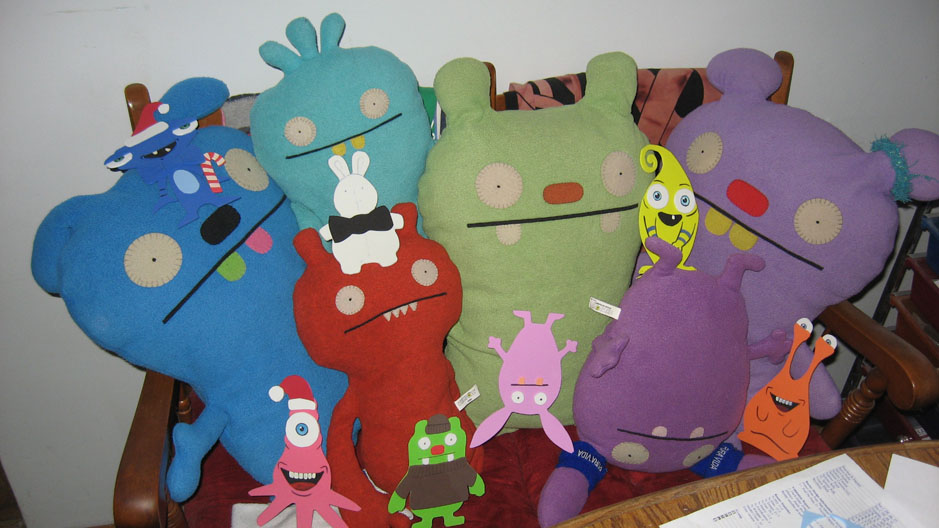 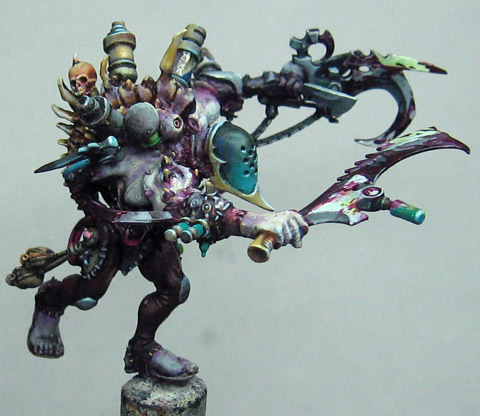 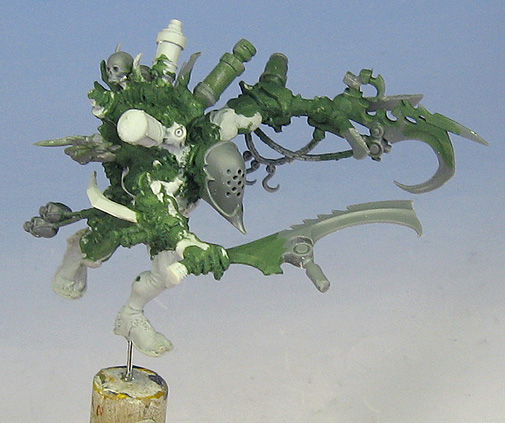 Sons of the Morningstar color scheme... 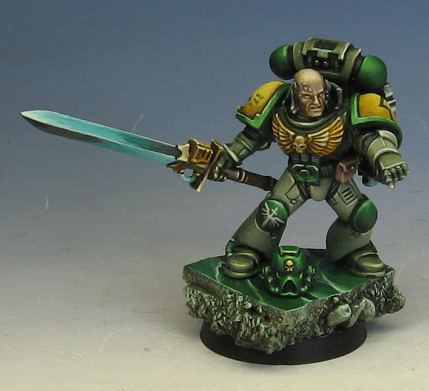 Here's another addition to the Dark Angels splinter chapter from a while back.  It is a fun color scheme, but I had to set up a whole new group of colors, as the original ones were long gone. :-) 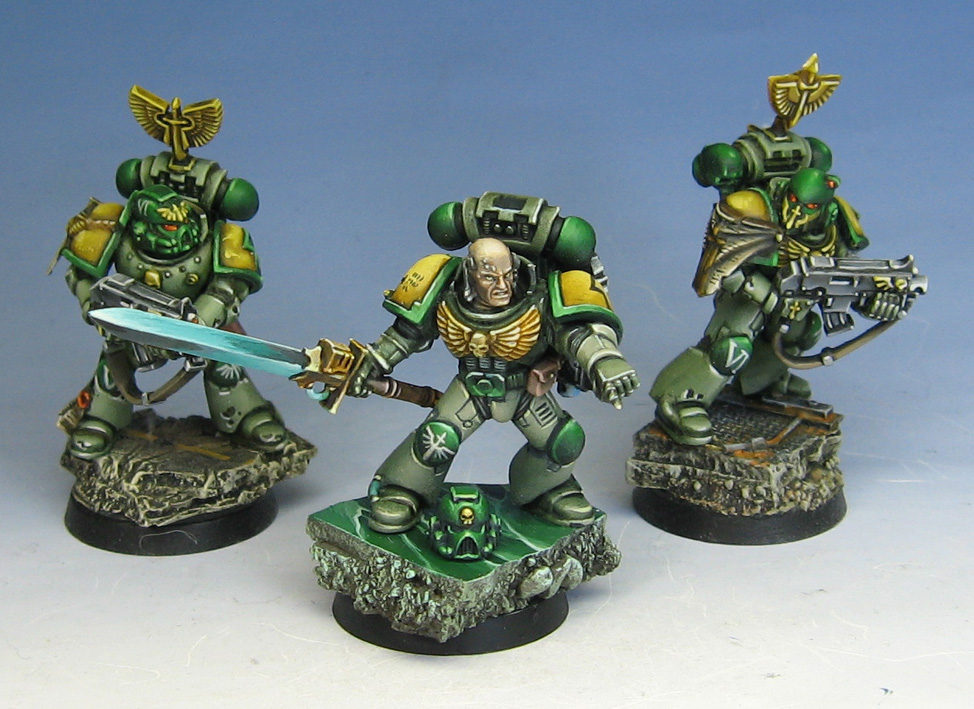 Posted by wappellious at 6:54 PM No comments:

Cernunnos the Horned One 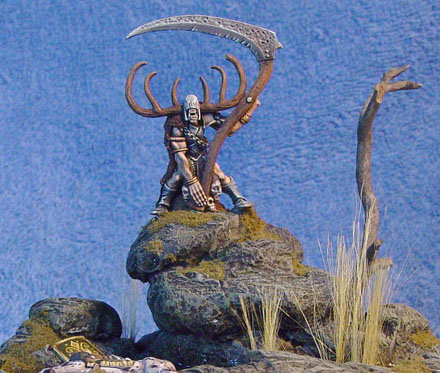 This was a fun little diorama I did back in the day, featuring another Celtos miniature.  He is Cernunnos the Horned One.  I believe he was part of the Fir Bolg faction.

Once again, this was done mostly with sculpey.  I pressed real rocks into the unbaked clay to create the texture.  If you look in the basing techniques category, you will find several posts describing this process. 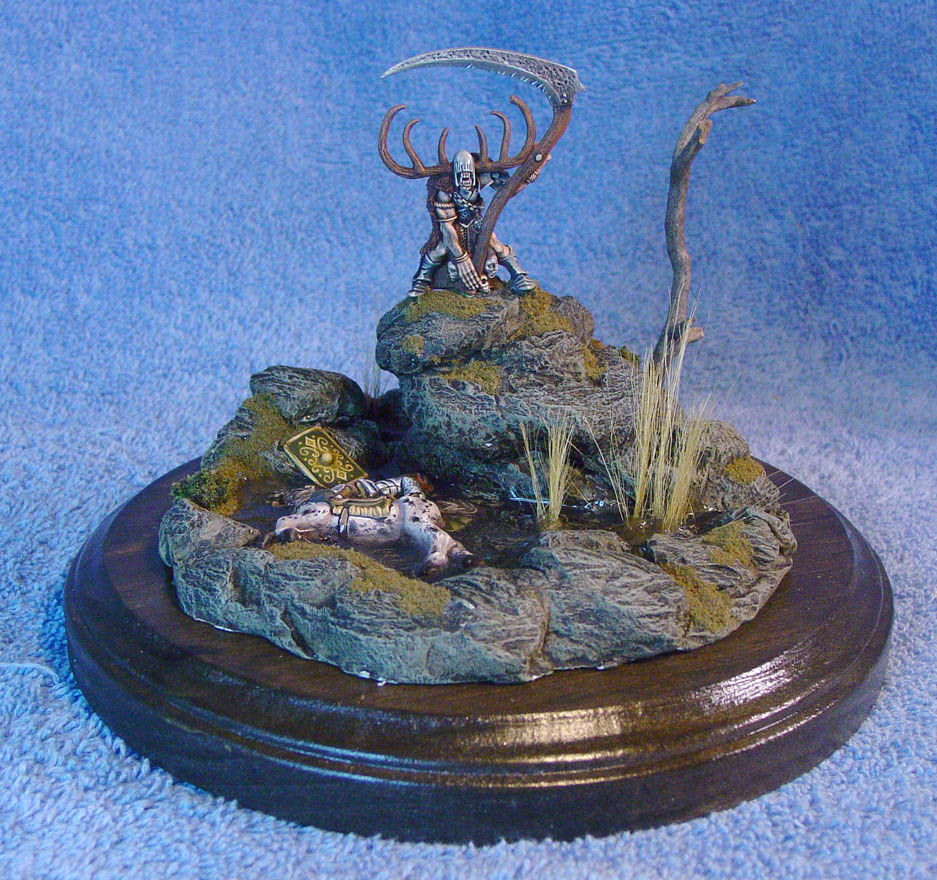 This faction was all about swamplands, so I wanted to create a pool area for the water effects. 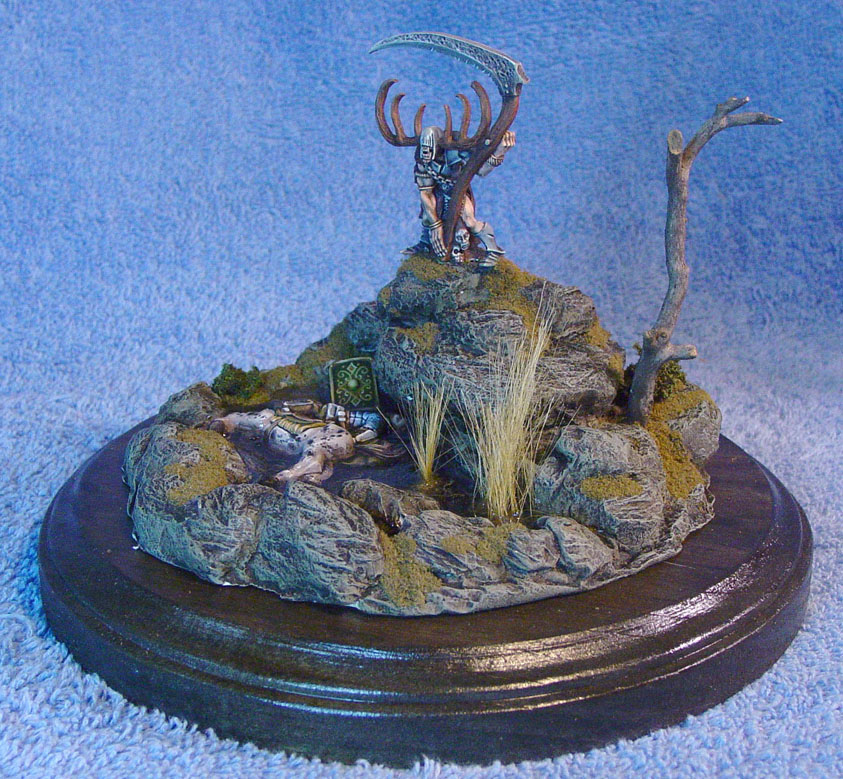 I built up the rock formation so that it would hold in the water effects material.  I knew it would take a few layers to get the depth I wanted. 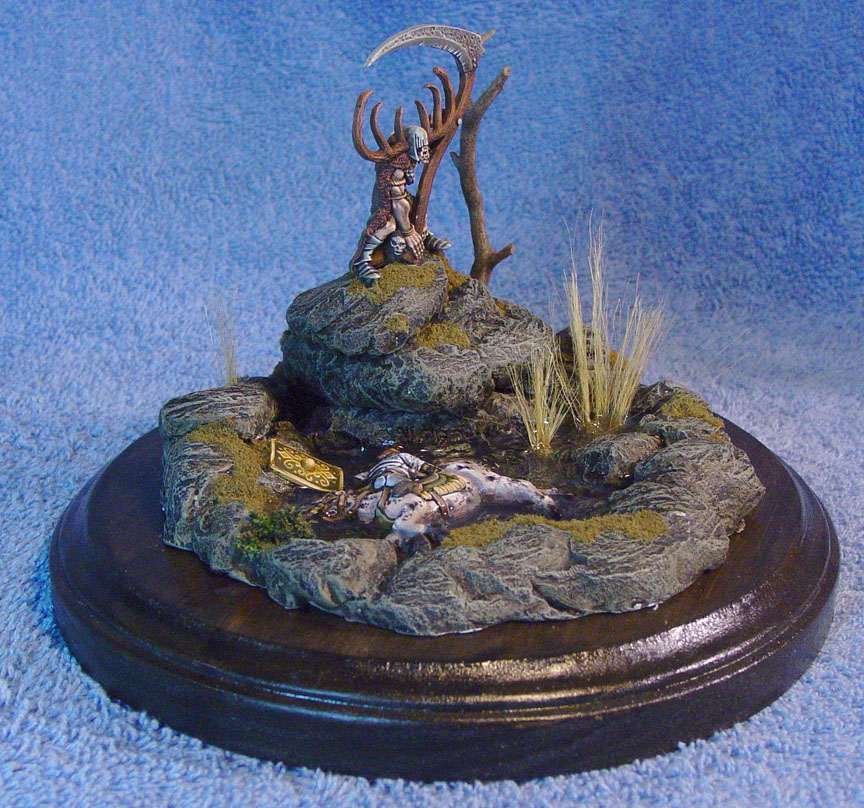 I also had to make it deep enough to hold the horse and rider casualties.  The shield is from a Gael miniature. 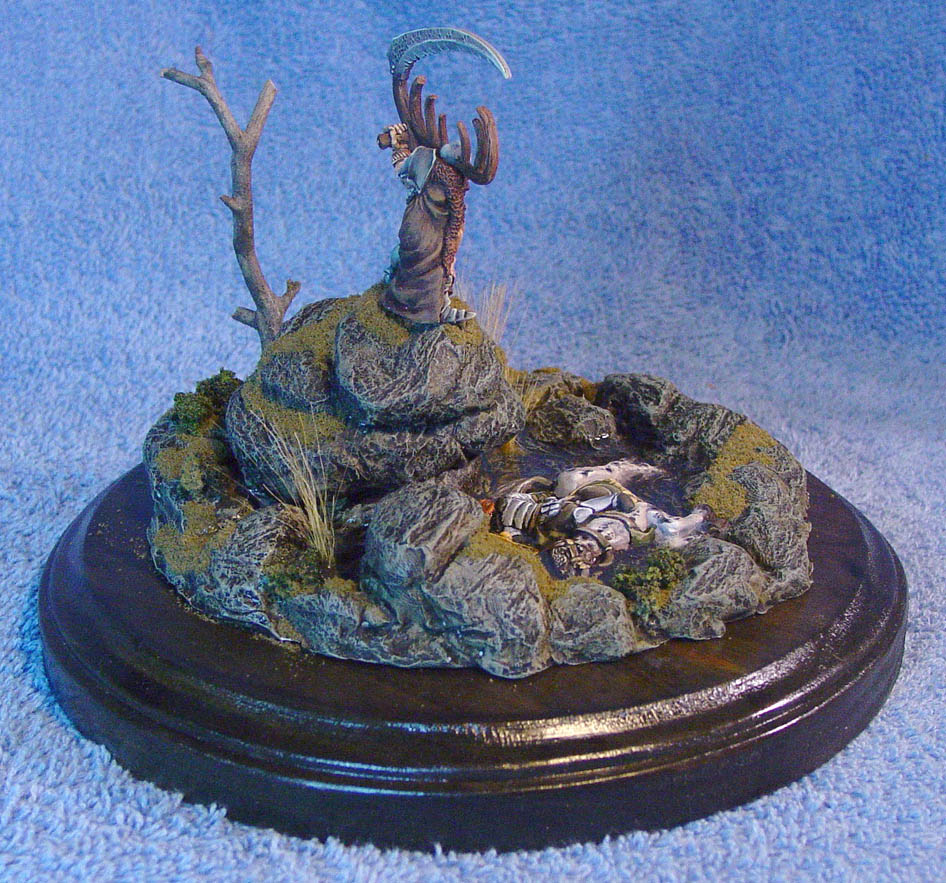 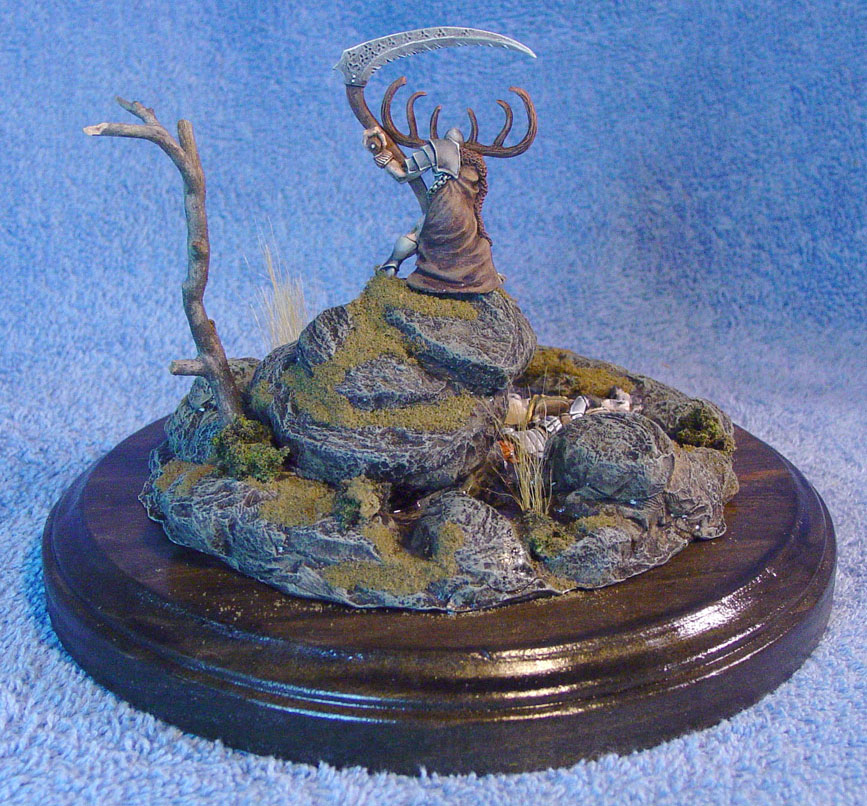 These views give you a better look at the water and the casualty. 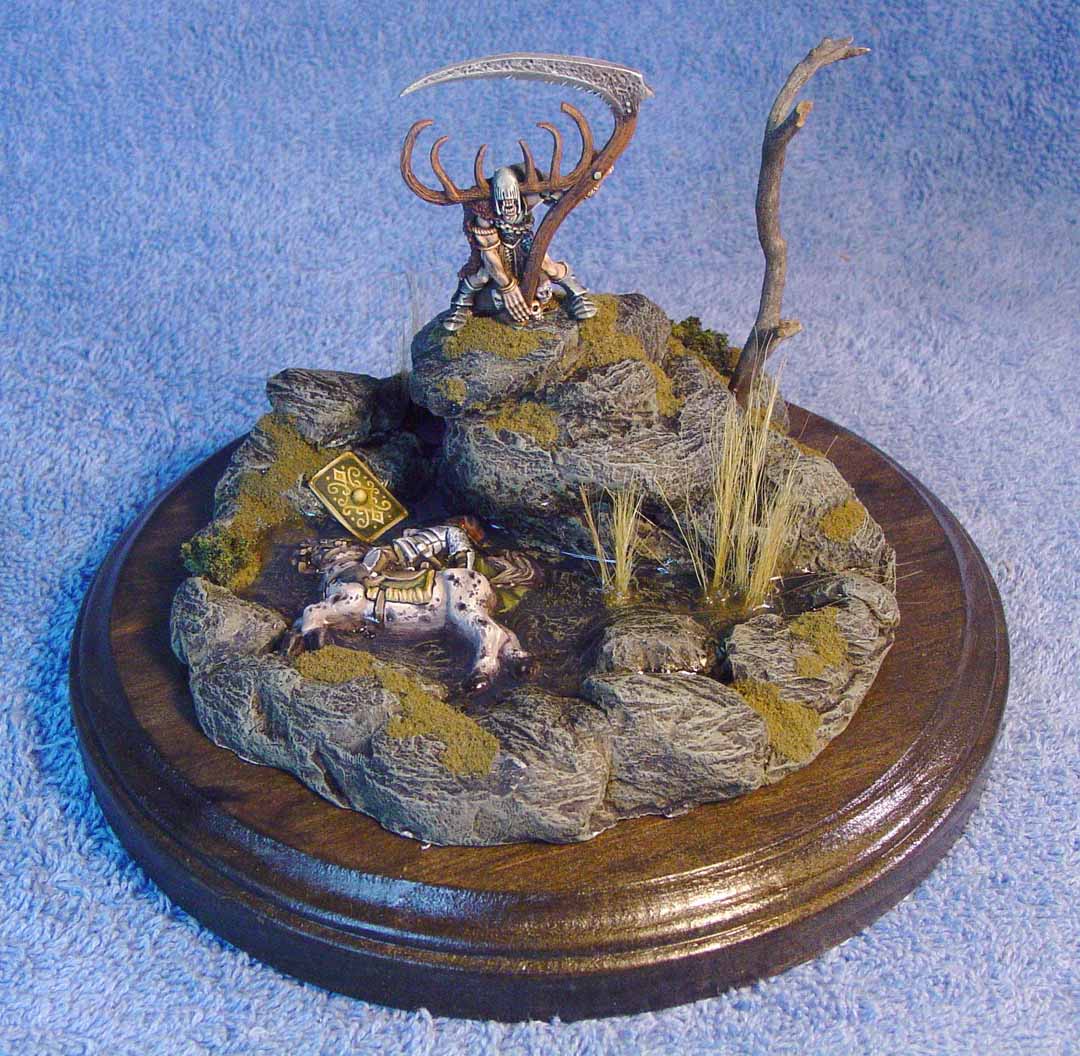 You can see how much I was able to submerge that horse and rider... 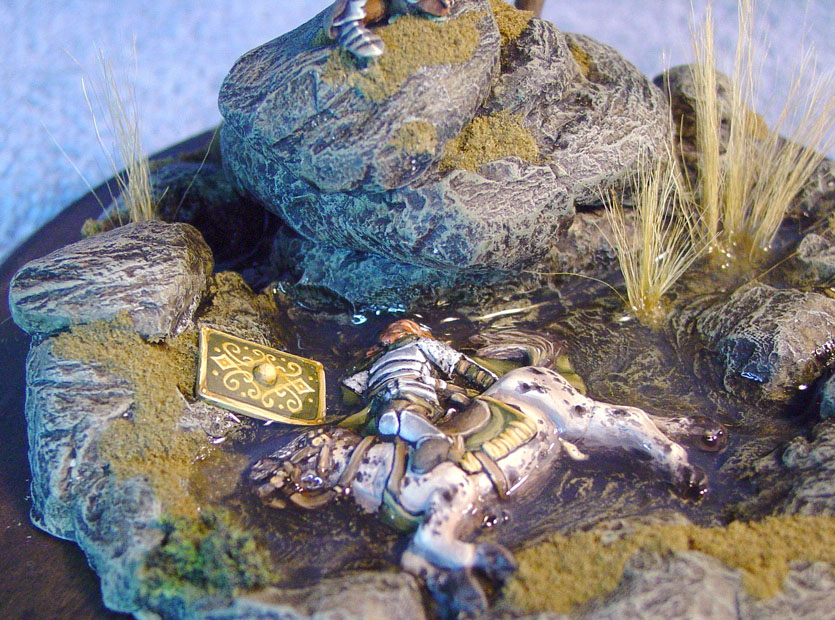 And for a close up on the miniature... Posted by wappellious at 4:29 AM 4 comments: 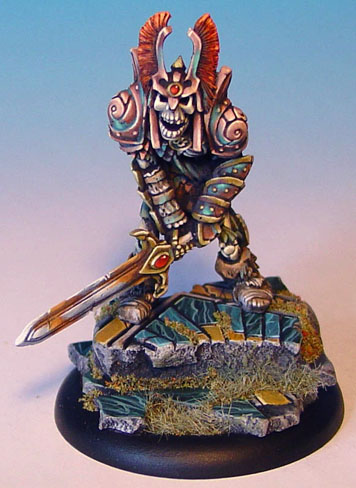 We return to the wonderful world of Ilyad Miniatures.  This is yet another example of how nice the sculpting was on these figures.  While the armor and swords were almost always very intricate on these, it was almost easier to paint them than the simpler swords on other miniature lines.

Sometimes undead figures can be more difficult to paint as the sculpting is not so great.  In the attempt to make the armor look aged and damaged, all the detail is muddled.  Not so where!

The base is made from sculpey, as usual. ;-)

I had some fun with a bit of verdi-gris on the armor.

Posted by wappellious at 8:49 PM 2 comments: 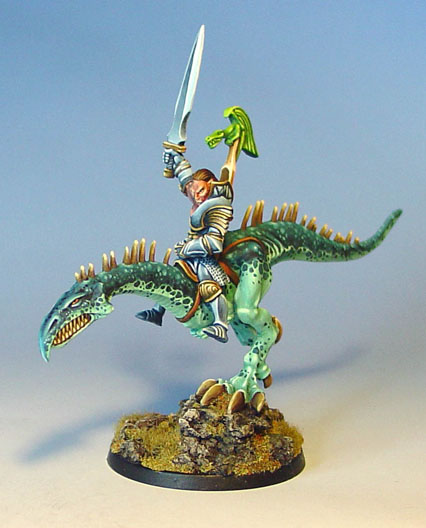 The Celtos miniature range was always a favorite of mine.  I think that Brigade Miniatures purchased that line.  The Sidhe were the Elves.  You have seen a few dioramas that I have posted in the past using the Sidhe. 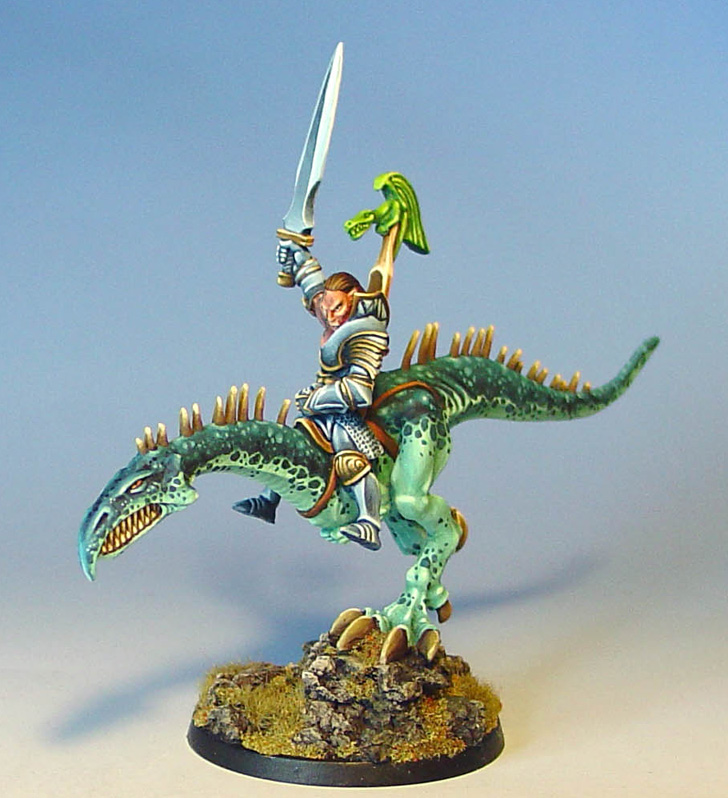 At some point, I still want to GM a game using the Slaine RPG system.  The Celtos minis are perfect for that!! 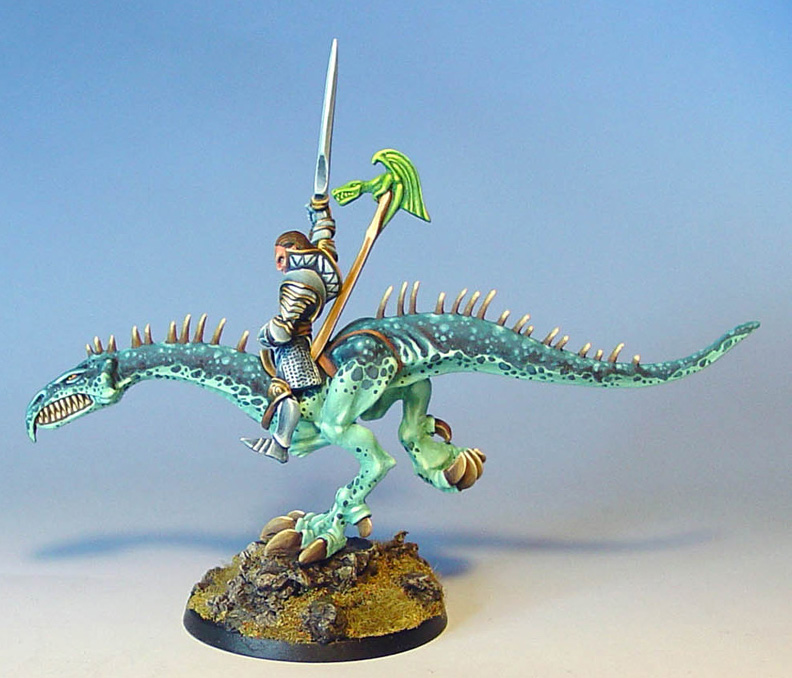 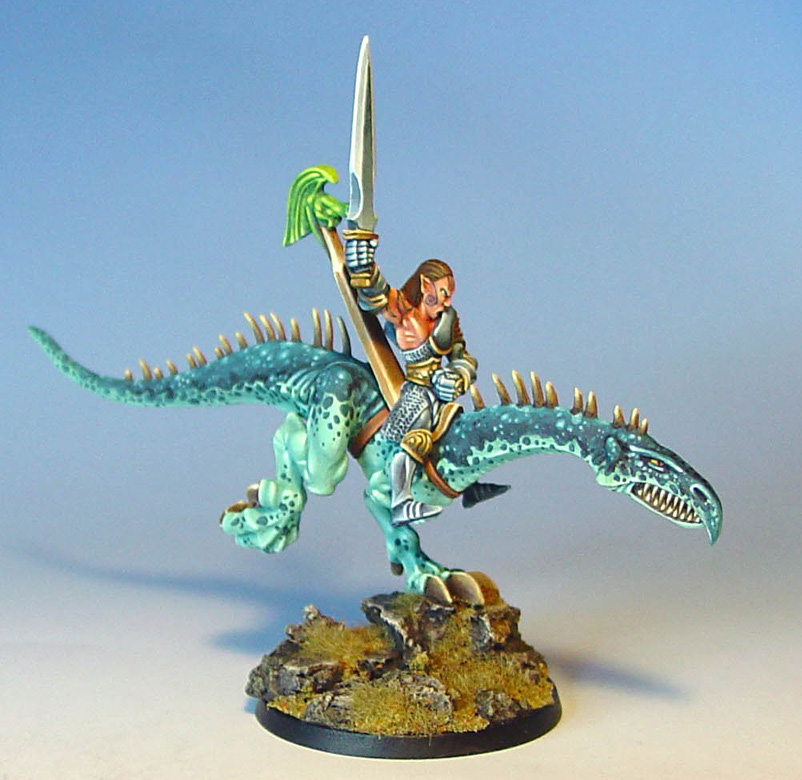 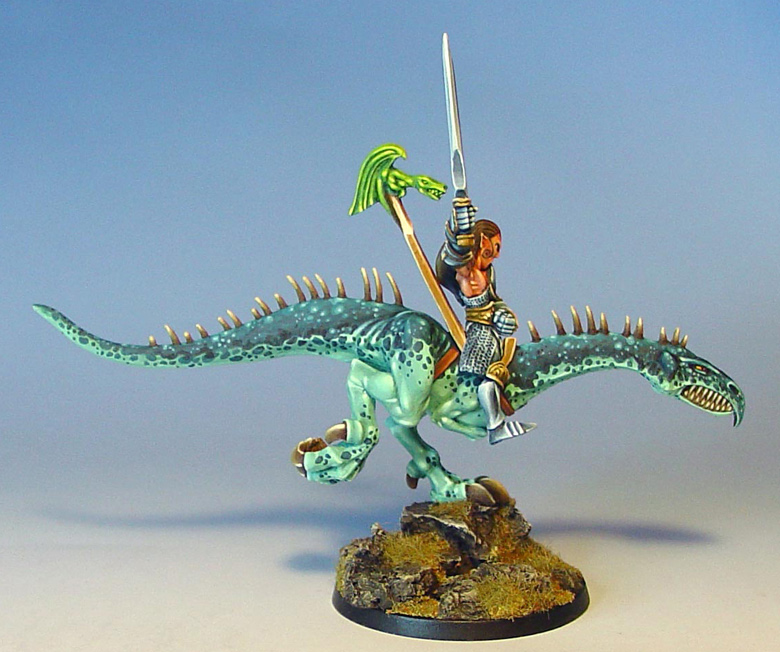 I have some more recently discovered Celtos minis coming along soon... stay tuned! 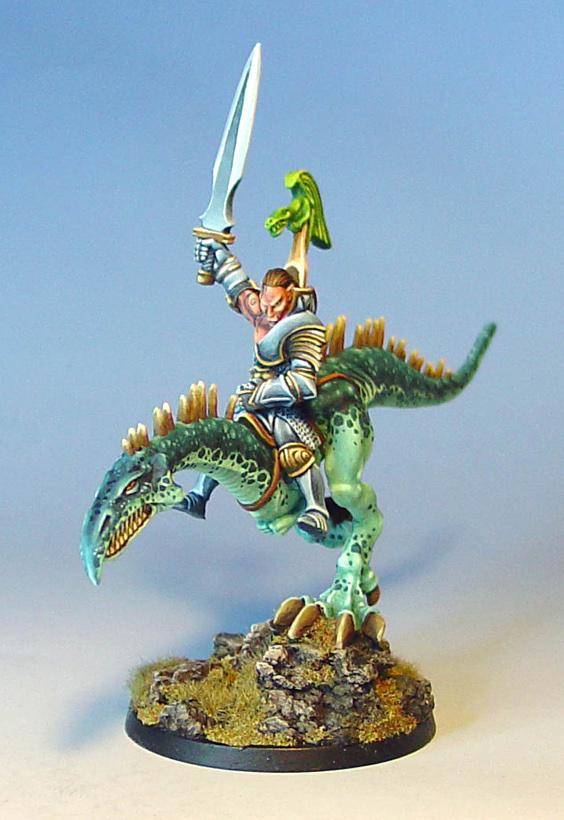 Posted by wappellious at 12:13 PM No comments: 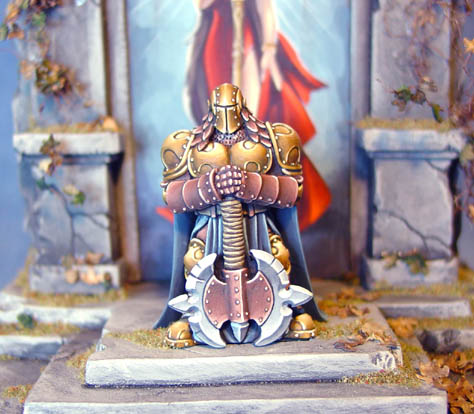 This post has some close up images of the miniature I used for the diorama.  Ilyad always sculpted the armor very nicely, without those crazy anomalies that leave you guessing how the heck you are supposed to paint it!

The cloaks were always straightforward as well.  Each figure had a lot of personality to the armor, but they were fun to paint! 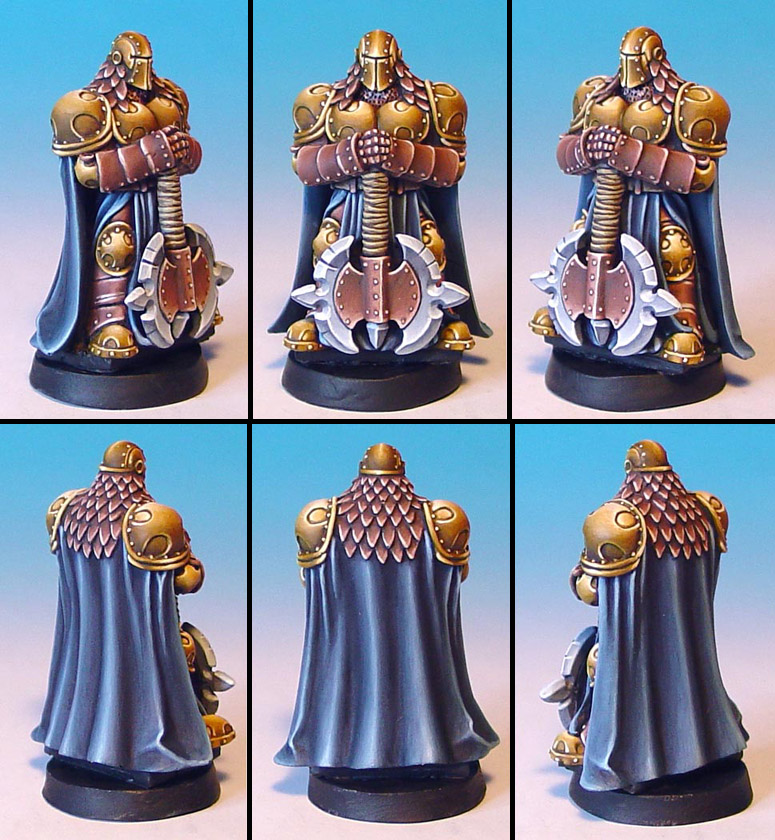 Here are some more close ups of the mini and the diorama... 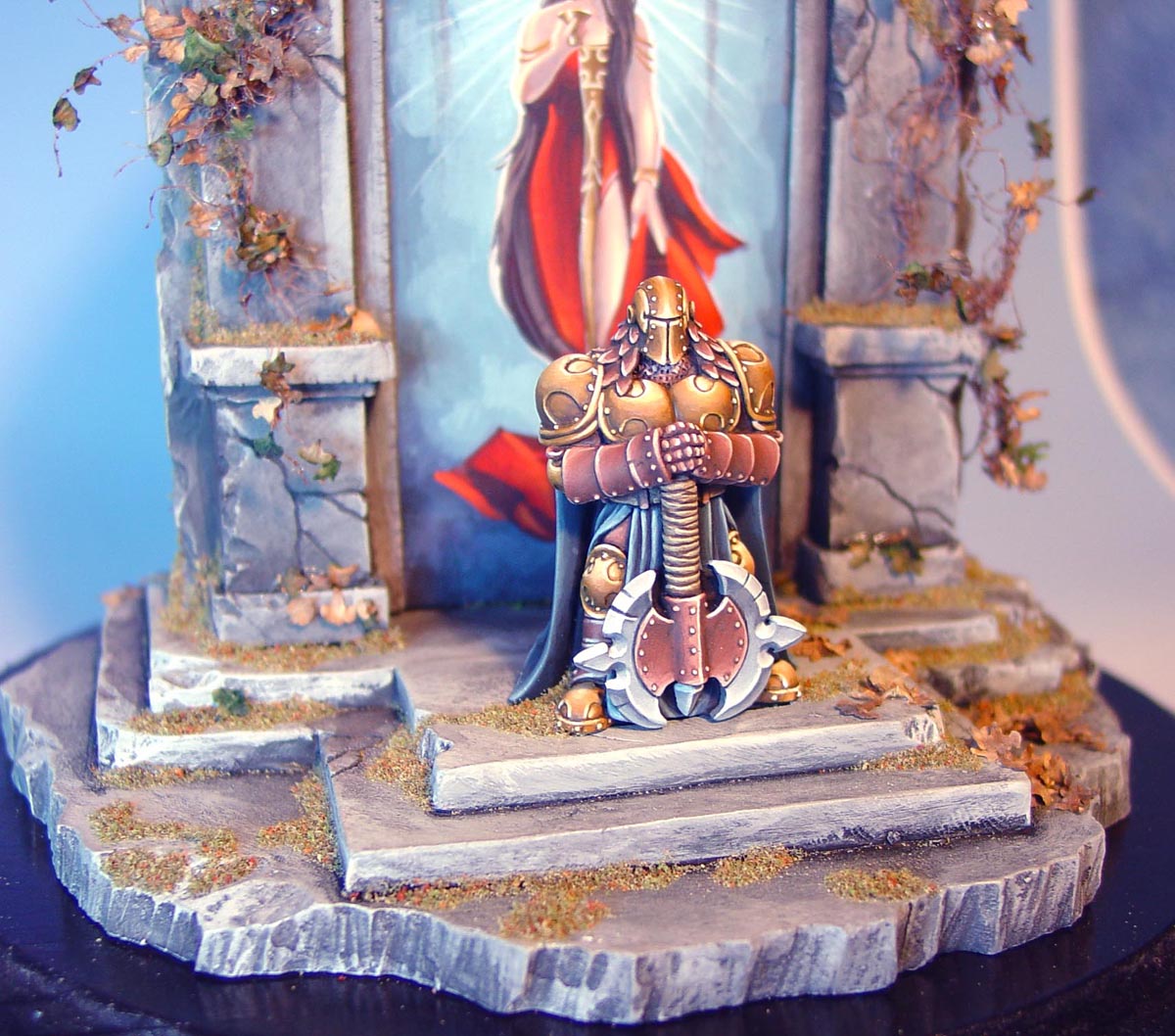 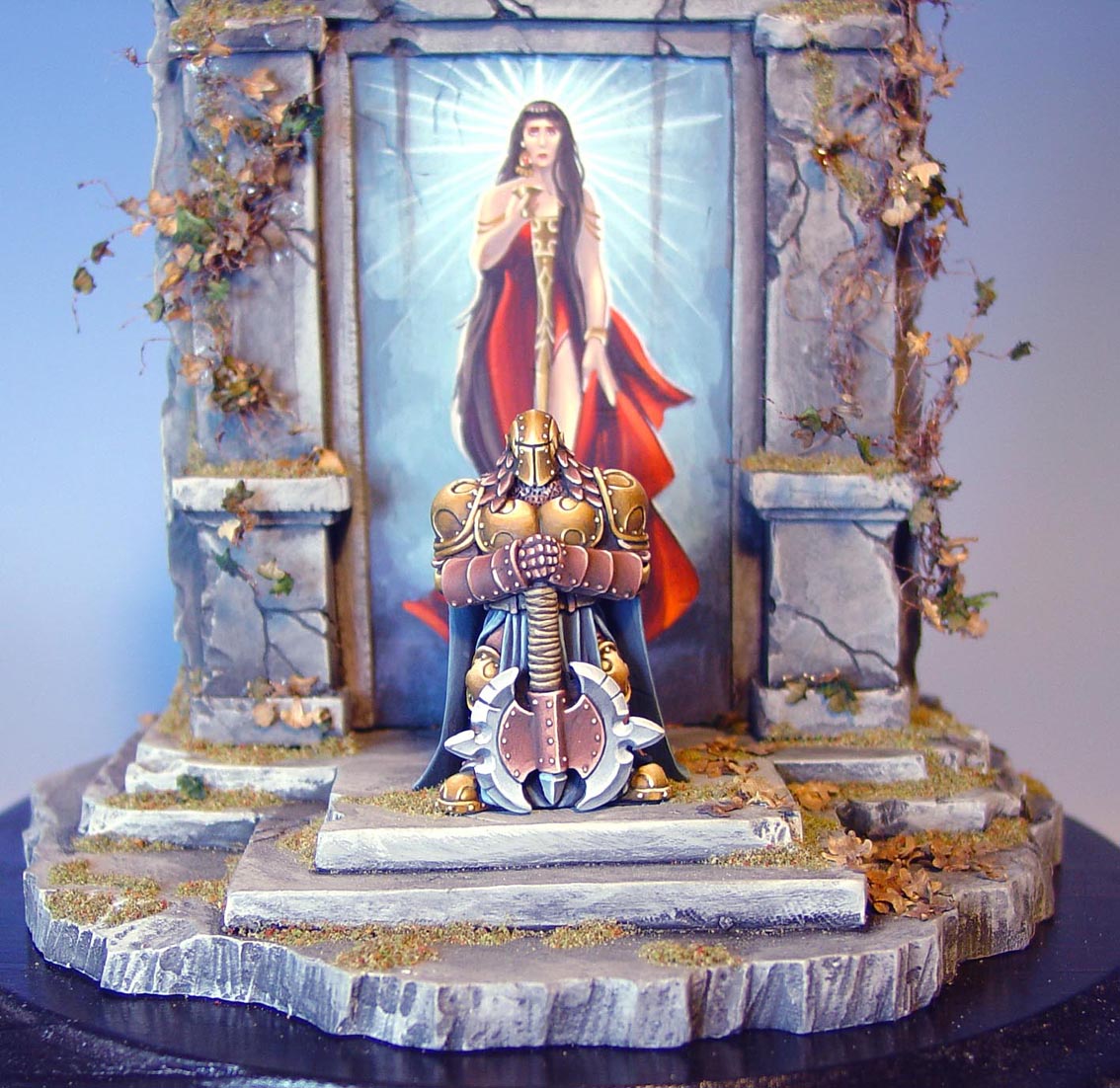 One last view of the mural before all the foliage materials were applied! 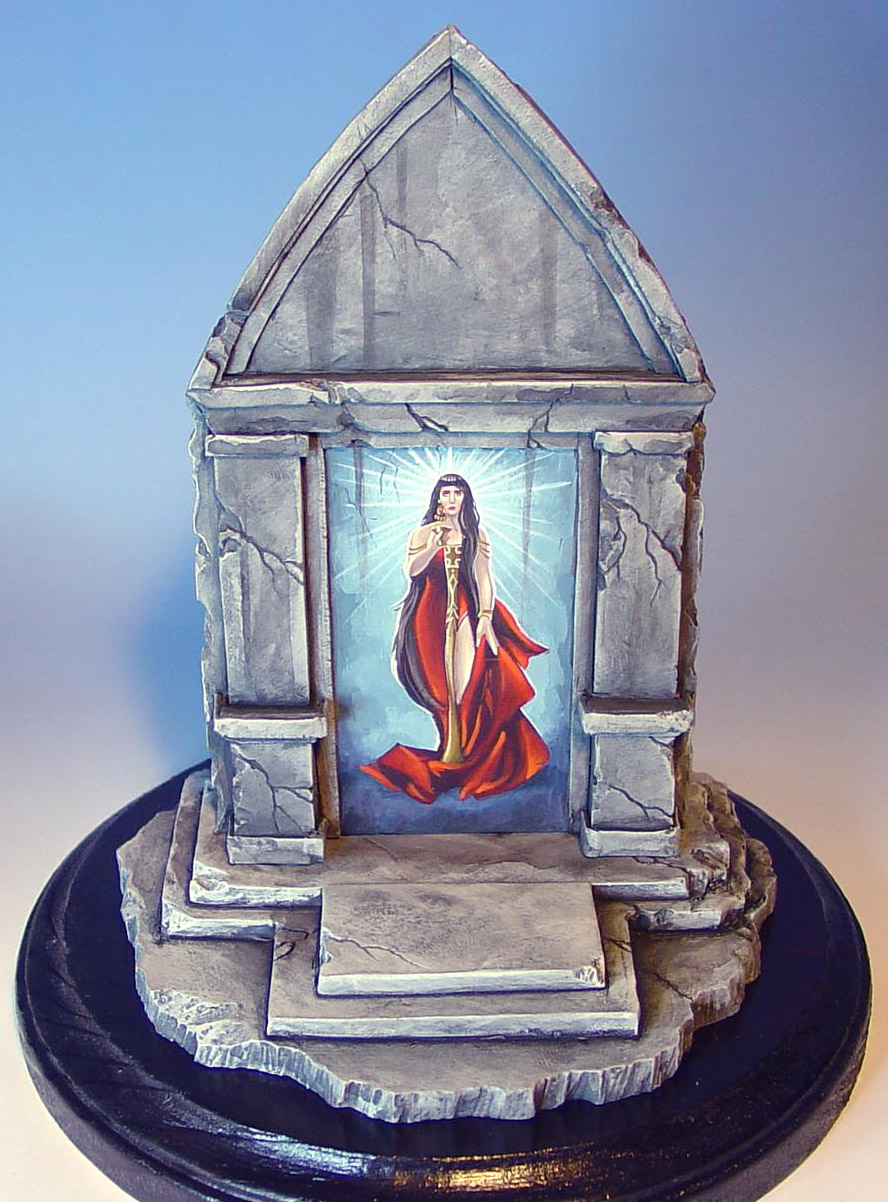 Posted by wappellious at 4:15 AM 6 comments: