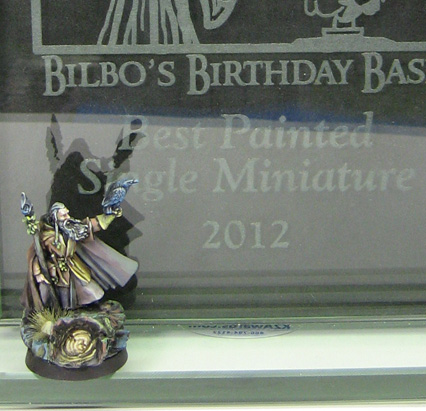 OK!  Bilbo's Bash is over, and it is time to begin the review.  The short answer is freakin' amazing!

When you sign up for this tournament, you are in for something special.  Everybody walks away with something, leaving no one empty handed.  The swag had the nifty custom dice, the priority medallion, and the dice bag/patch.

Everyone also received a box of figures, whether you won an award or not.

Did I mention food?  Yes, lunch was provided on both days.  Yea!  It is the first tournament where I did not attempt to starve myself to death.  That makes for a much more pleasant experience. :-)

On the topic of pleasant experiences, this truly was just such an event for me.  Pound for pound, the painting efforts for this tournament were tremendous.  Lots of talent and care on display.  It was an honor to take part.  The players were of the variety that you would love to play against all the time.

Given the amount of effort that is put into this tournament by Brent, Chris et all, it makes sense that the participants would also try to make it a great environment.  Normally my favorite part of a tournament is when it is over!  This time around, I was a little bummed when it was over. 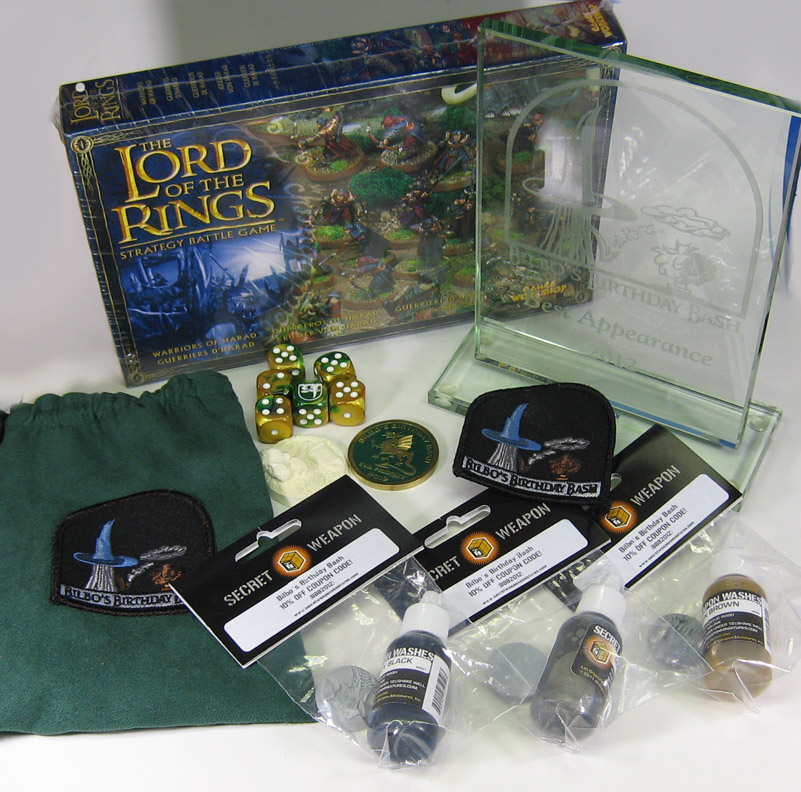 As you can see, I was fortunate enough to win the Best Apperance award.  There were lots of really fantastic armies there.  All the efforts on the display board proved to be well worth it!

The trophies were beautiful, and there were some extra jars of paint as well. :-)

In addition, they had a separate painting contest.  How cool is that?  Once more, I was fortunate to win Best Painted Single with Radaghast the Brown... 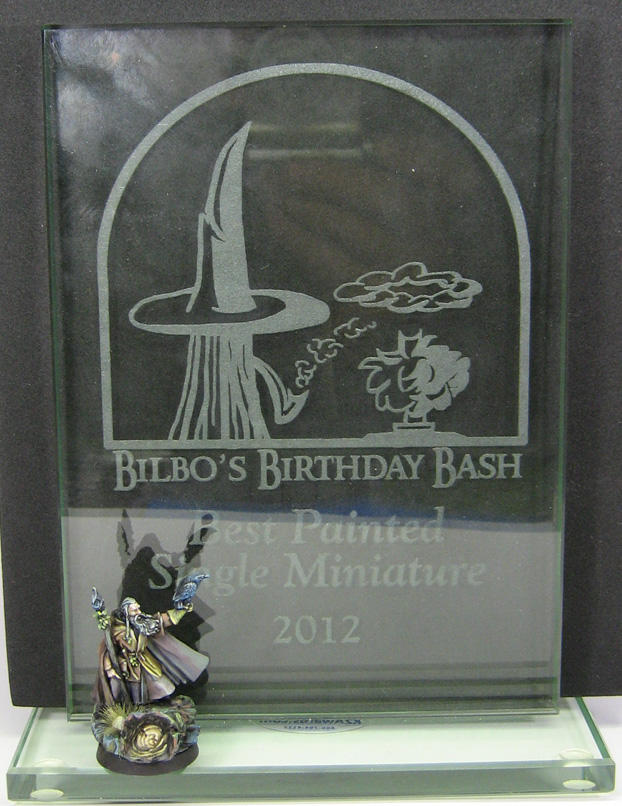 Also, I managed to take home a trophy for Best Painted Cavalry with my converted Saurumon figure 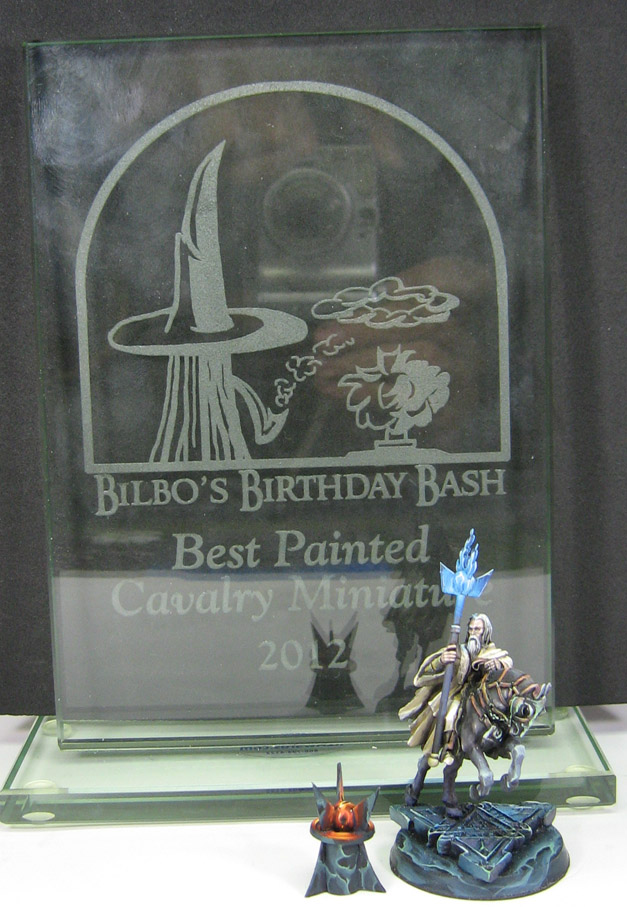 These pictures don't show all the additional work that went in to the tournament, such as the individually themed gaming tables, which was very fun, and impressive!

I can't emphasize enough just how great this event was.  Everyone there was very fun to be with, and it was a great time.  I will start posting pictures of the games later tonight!

The Battle of Fortress Falls: Minis on the display board! 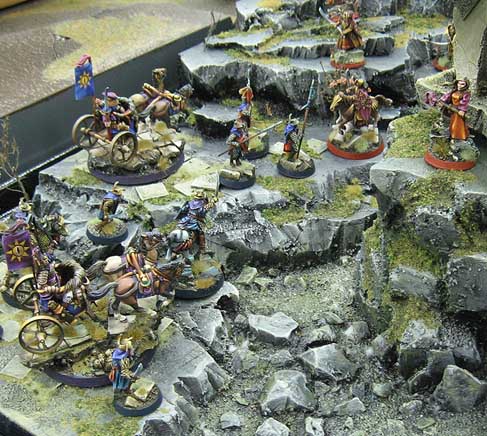 Well, there were definitely many times where I did not think I would ever see this.  A week before the tournament, I had given up hope of ever getting this done.  Instead, I was going to paint up a few magnetized boards like my Grey Knight army board from Adepticon. 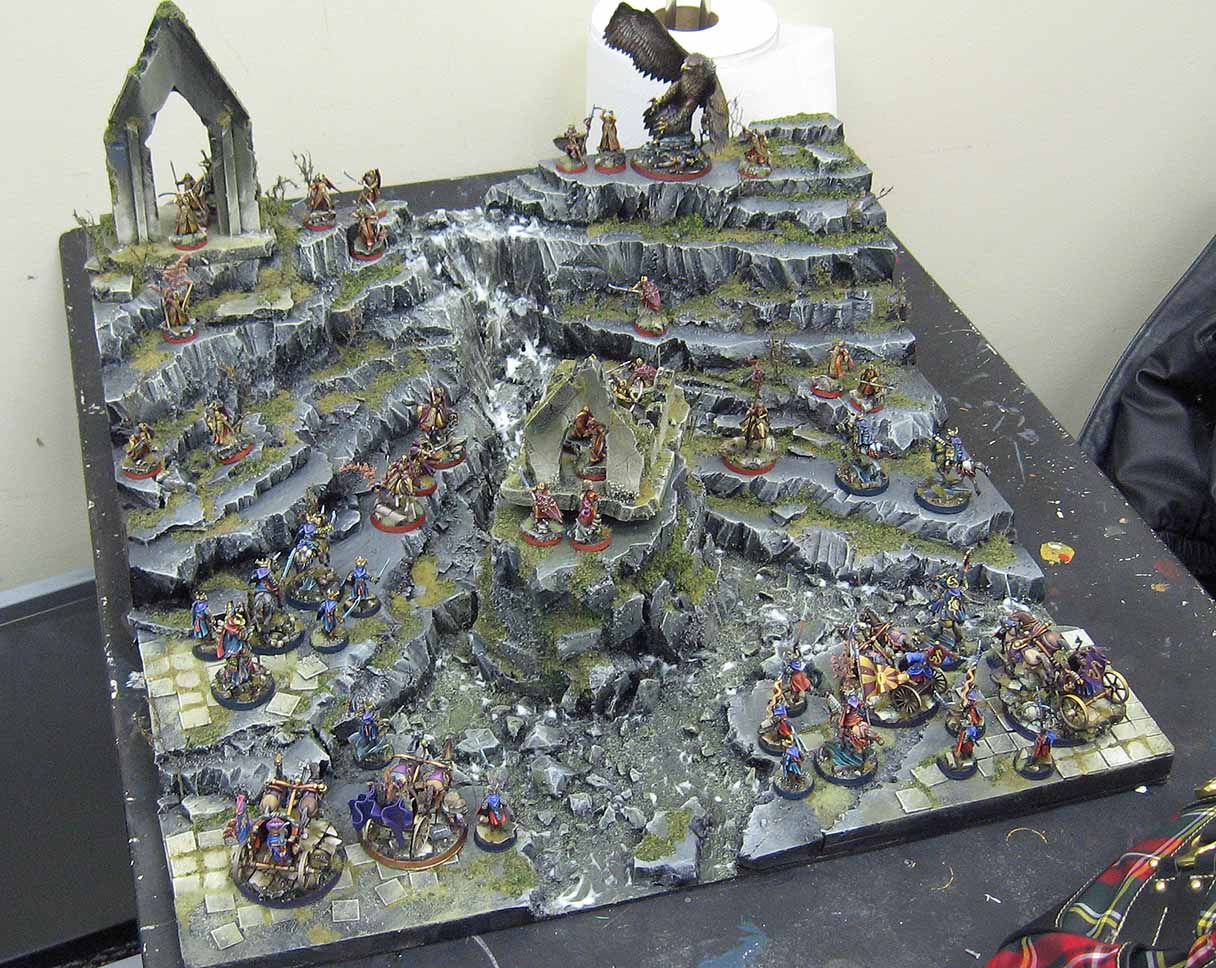 I don't know if it was insanity or pure spite that drove me to get this board done.  From our recent experience making the terrain board for the Dragon Shoppe, I thought that the 'terrain' part of the board could be done very rapidly.  It was all the buildings on top that would be the problem. 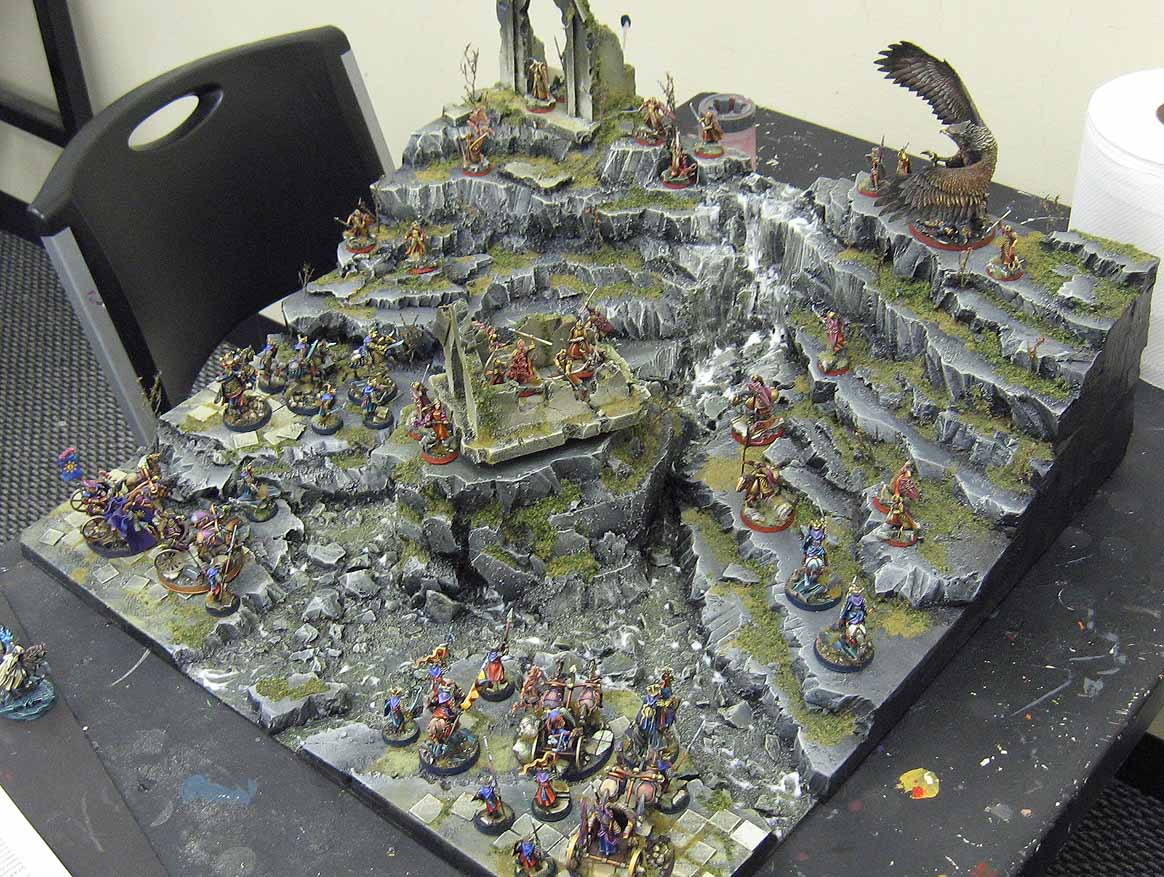 My original vision was a large set of structures that would be interlocked together, with towers and platforms, water cascading through it all, etc.  That part had to be abandoned, which was a bummer.  I also had to give up writing out the story and fluff behind the armies, which I never do. 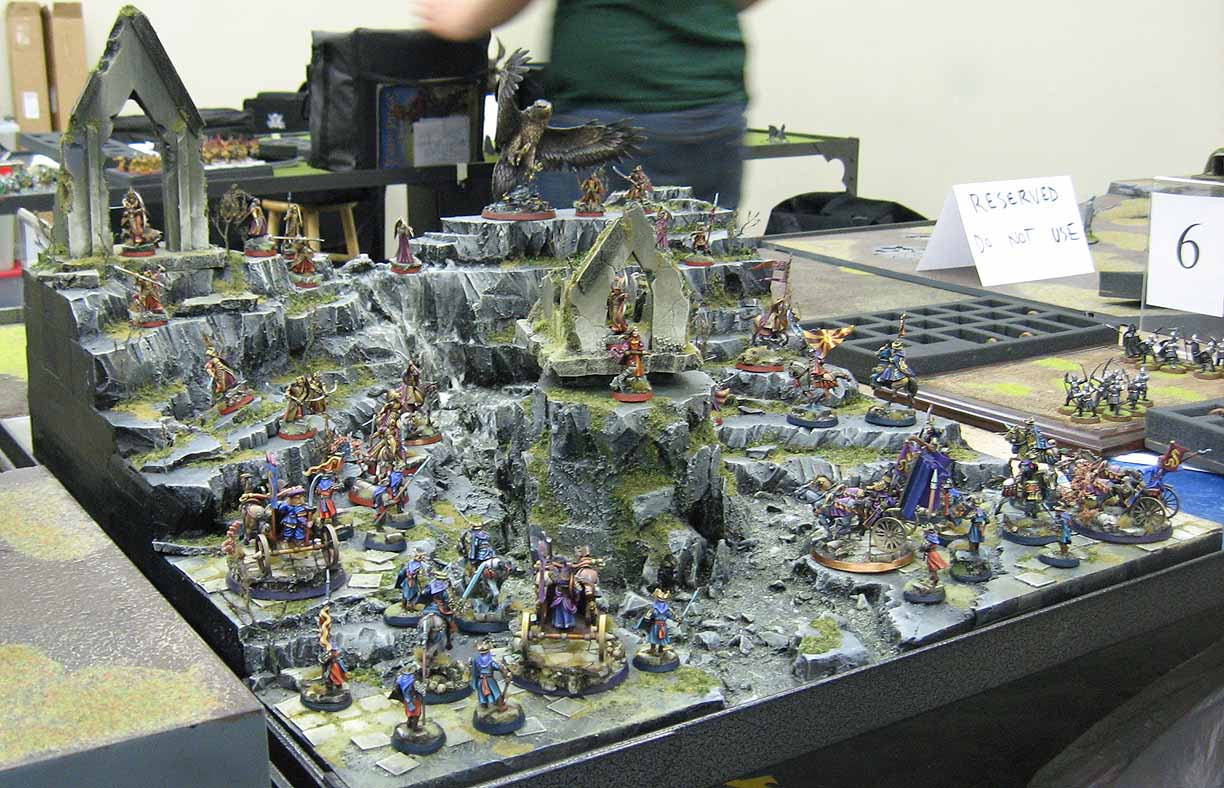 I was determined to at least have some kind of structures on the board, so I went with the ruins, as I mentioned in a previous post.  As it turns out, everyone else (who was not me!), had no idea about any of this inner turmoil, or the original plan. :-)  They just saw a neat landscape with waterfalls! 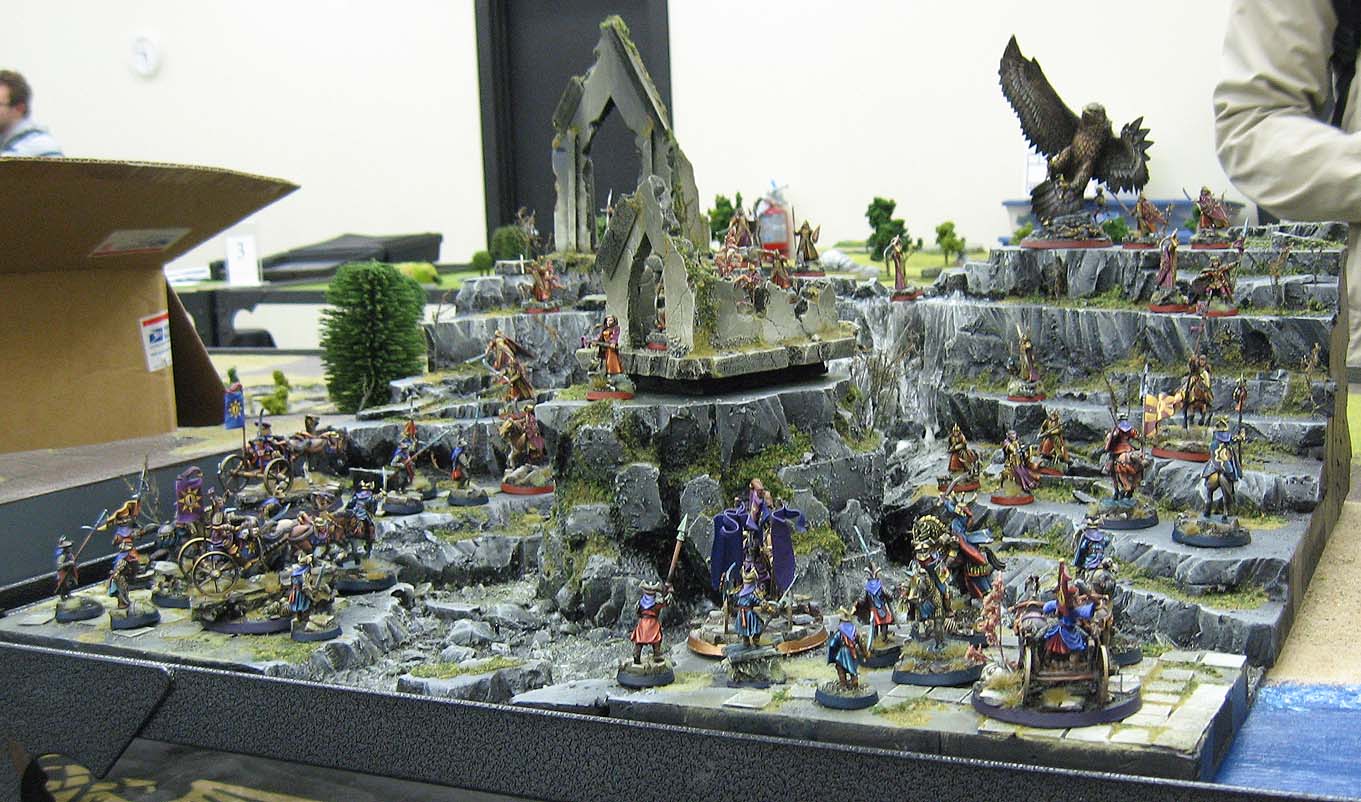 So, in the end, it was well worth all the extreme stress.  Getting to see both armies interacting on this piece was very gratifying.  Knowing that we can also use it for our games is even cooler!

Also, the magnetic primer really did help.  While the flock and grass did cut down on the magnetic effect in some places, it seemed to offer just enough hold to keep minis from flying off the board! 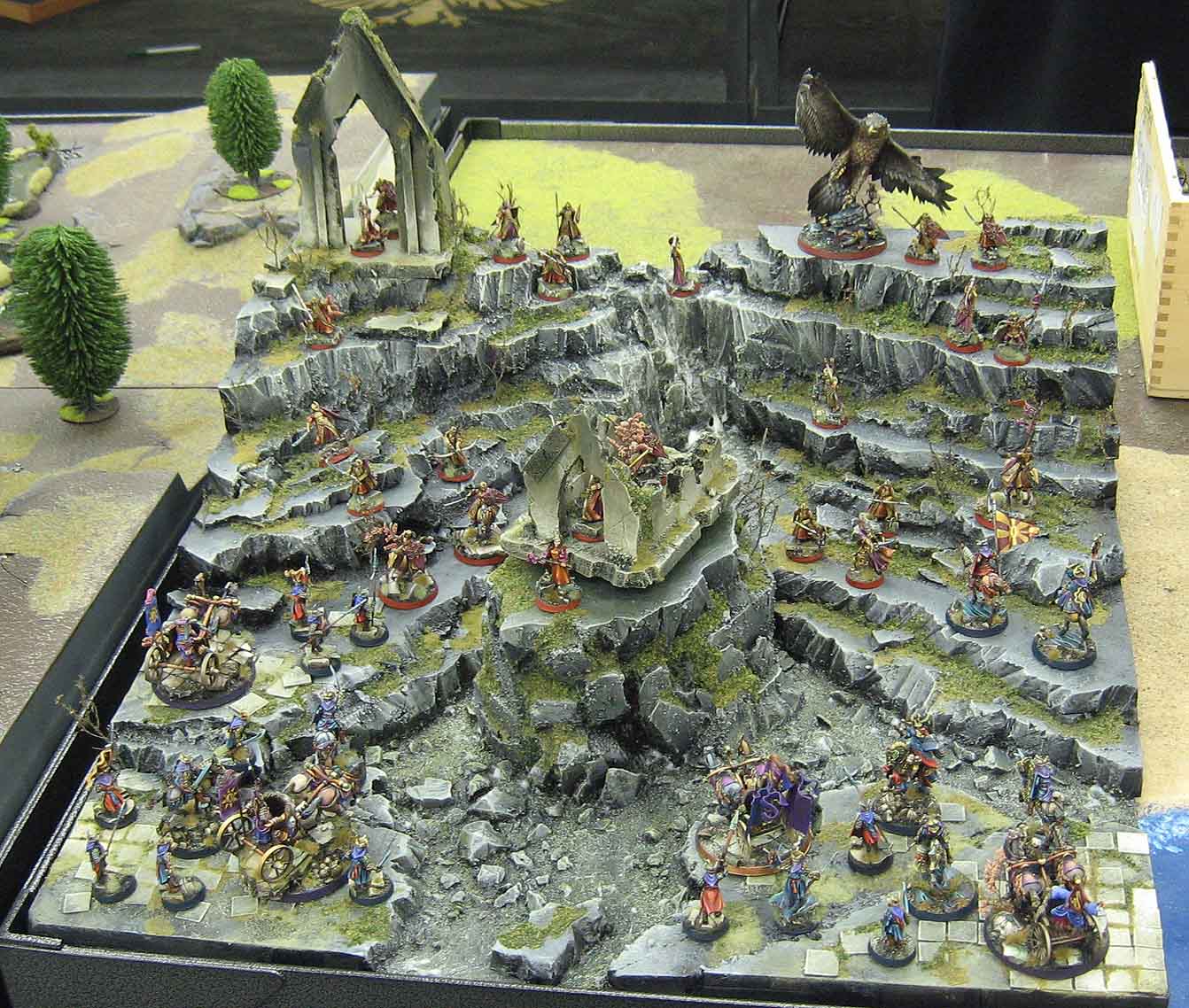 I was surprised at how much room there was for all the minis.  I could easily have gotten many more on here.  My thought process was to make the outcroppings large enough for a mini or two here and there.  Man, there's gonna be a lot of climb rolls on this baby! 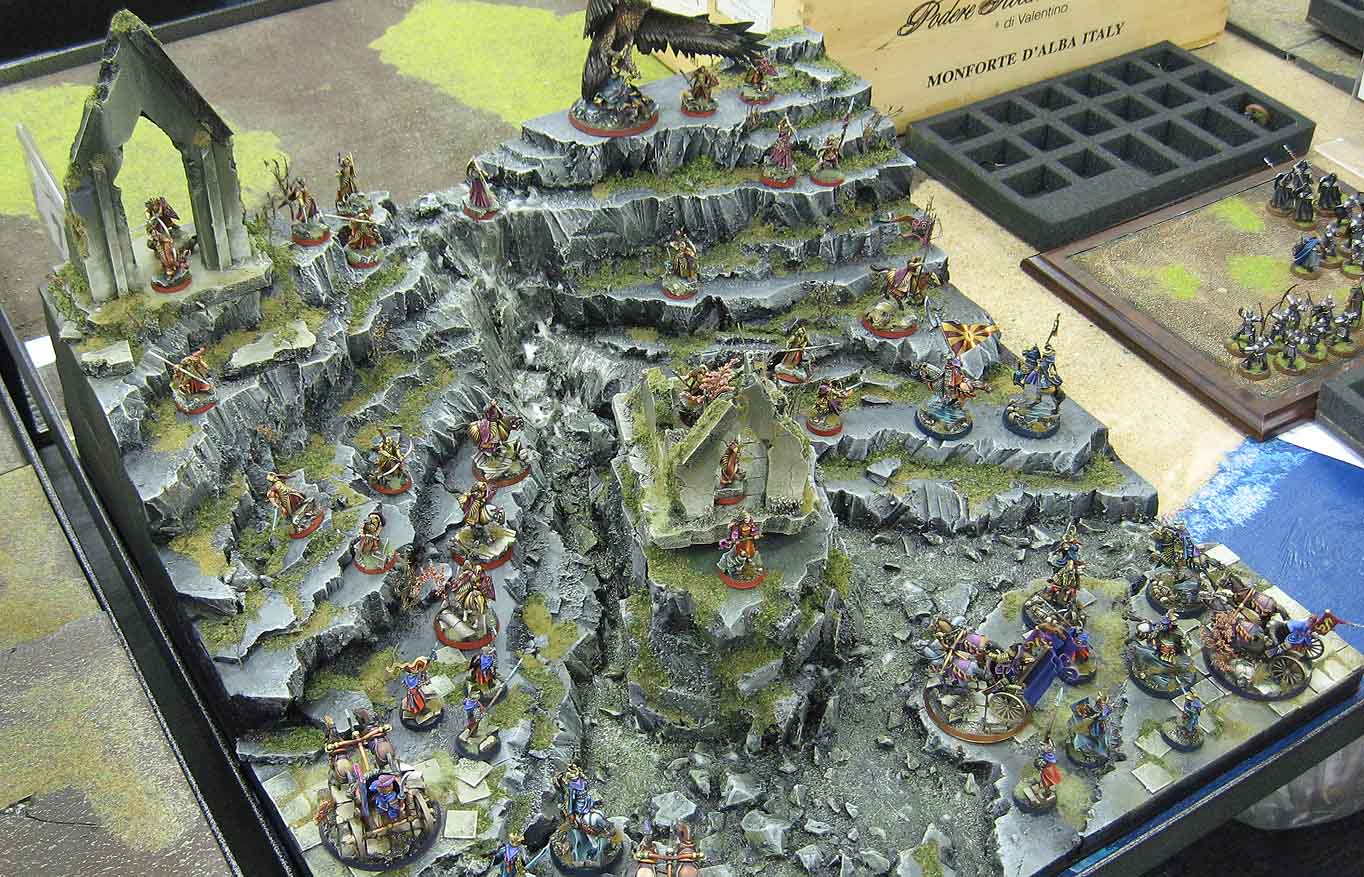 Here's Delilah preparing to call Nature's Wrath on some chariots... 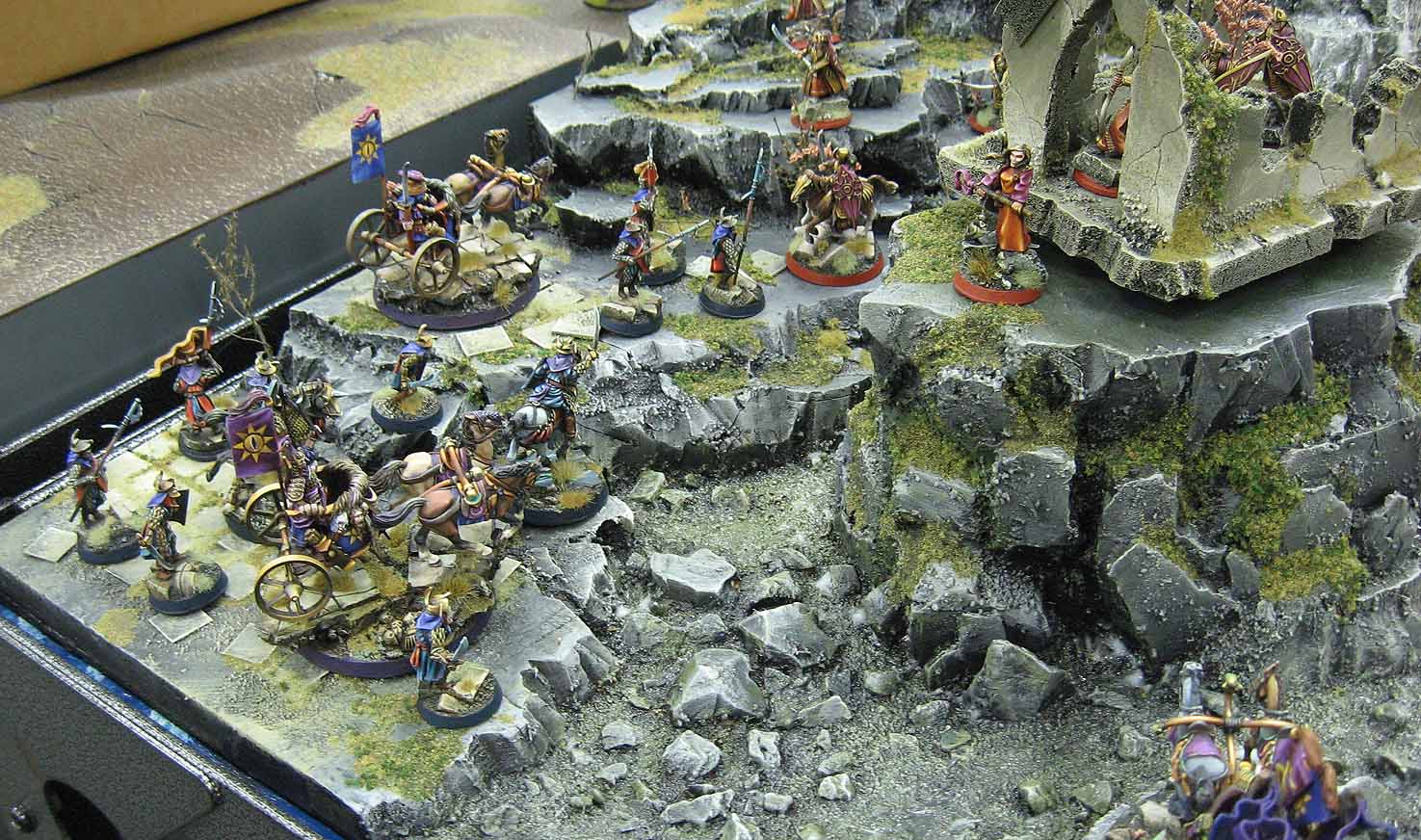 The King is trying to figure out just how he's gonna get across that river... 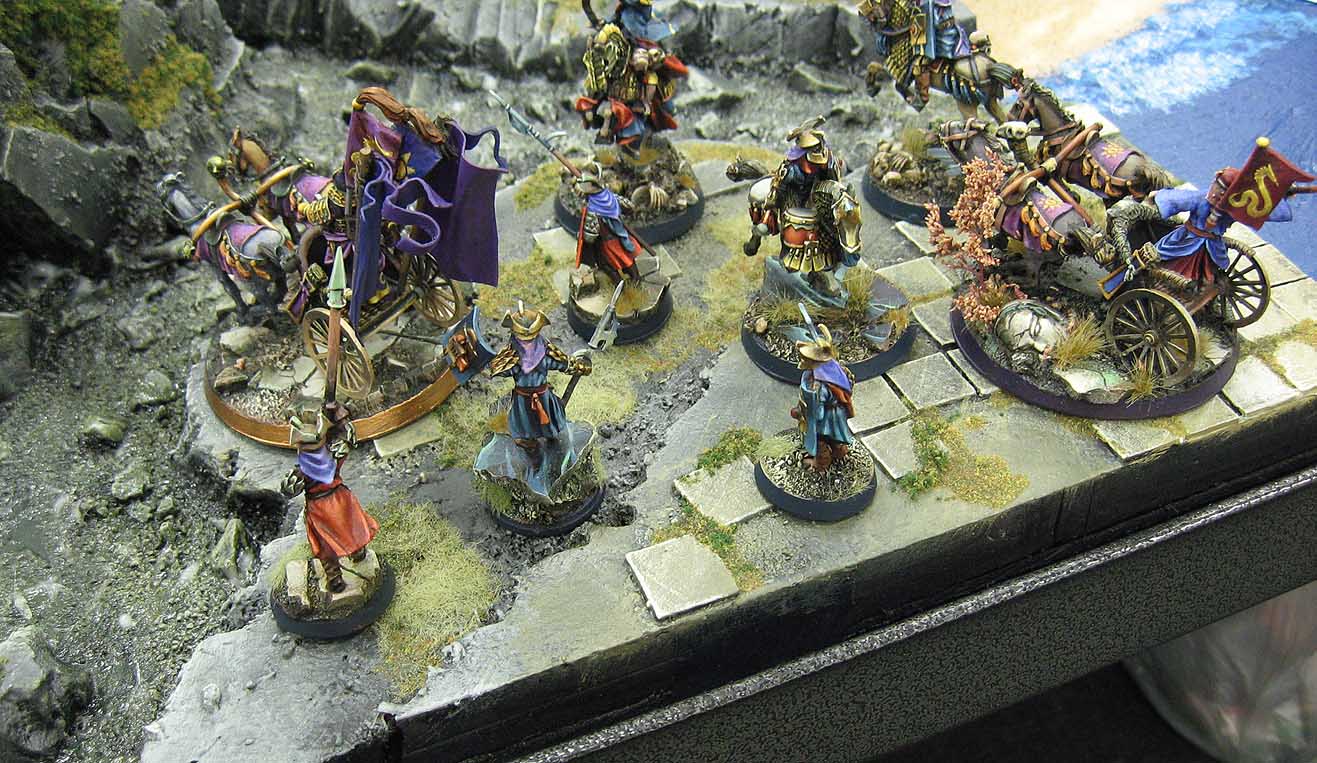 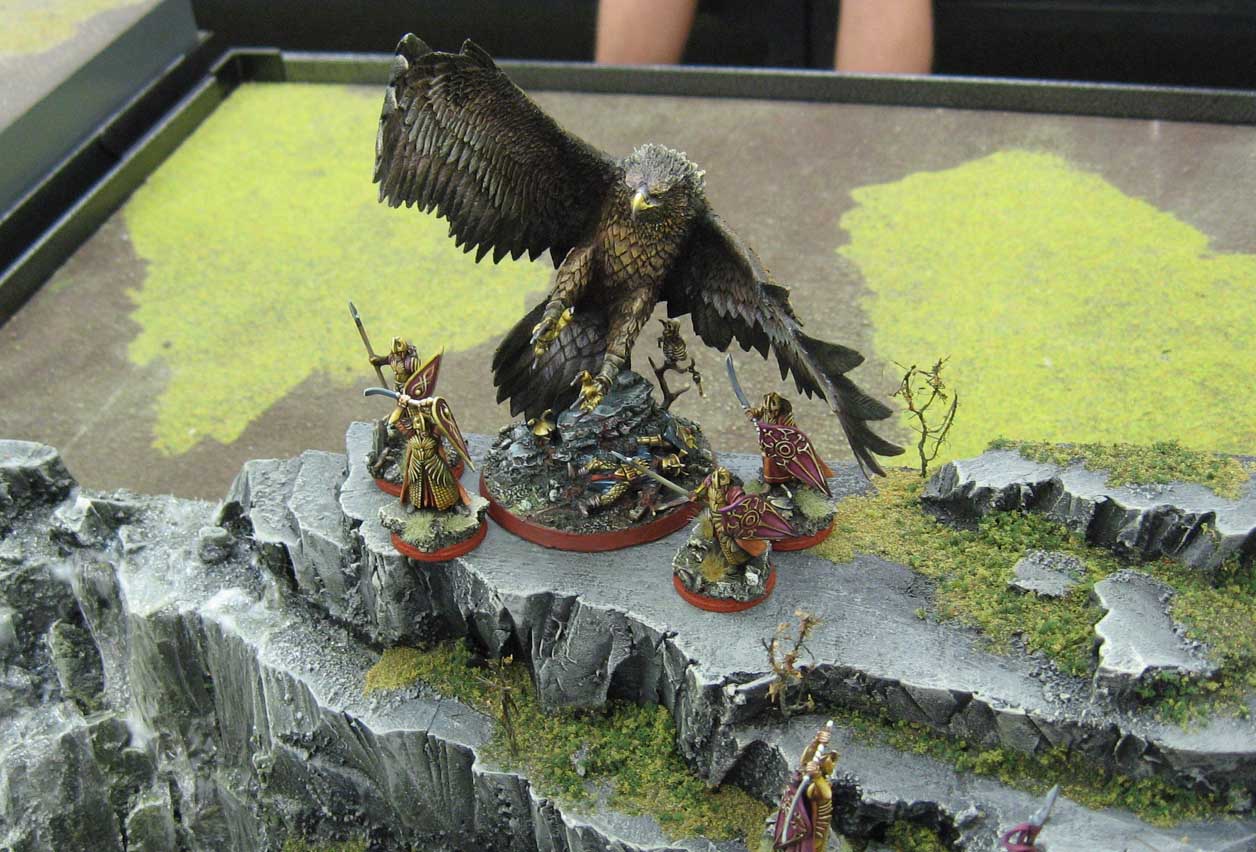 Later today I will get into the tournament itself!  Stay tuned.