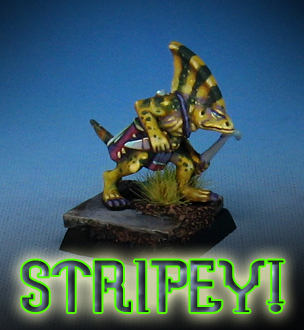 I did a number of "color test" skinks for the Lizardman army as that massive project moved along.  Each unit was suposed to have a different look, as I had placed a special character in each one of the Skink and Kroxigor units... such as a skink priest or a chieftan.

There were some restrictions on what color patterns would work, based on the various types of skinks and Kroxigor sculpts.  These skinks were more conducive to stripe patterns, but the newer skinks had more texture, so it limited the stripes a bit.

As far as the Kroxigors go, they had much more texture, so stripes were even more problematic there!  I had to stick with color transitions instead of actual patterns.

Posted by wappellious at 12:05 PM No comments: