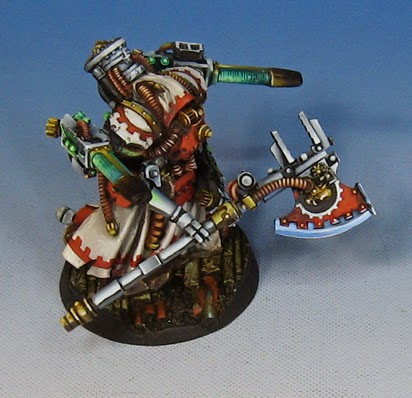 Back to the unusual, and that would be the Myrmidons.

I have said before that these are by far the most unusual things I have ever had to paint.

They present a number of challenges... much of which has to do with getting your brush into certain spots.  Also, the shapes just don't correspond to what you would normally expect.  It makes it more difficult to determine where lights and darks should go, and so on.

The stranger and the pine box... 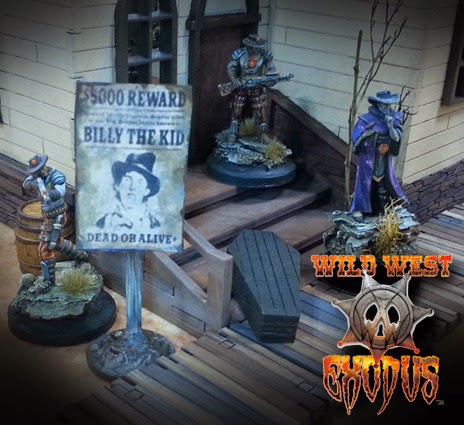 Following the death of Billy the Kid in the Judgement, it was all but certain that Jesse would pay the town of Wappelville another visit.

Pat Garrett would lead the way, but he would also call upon the services of Doc Holliday and Deputy Berenger.

For the very first time, one of the new Gyrocopters would be put into service, along with the UR-31 lawbot. 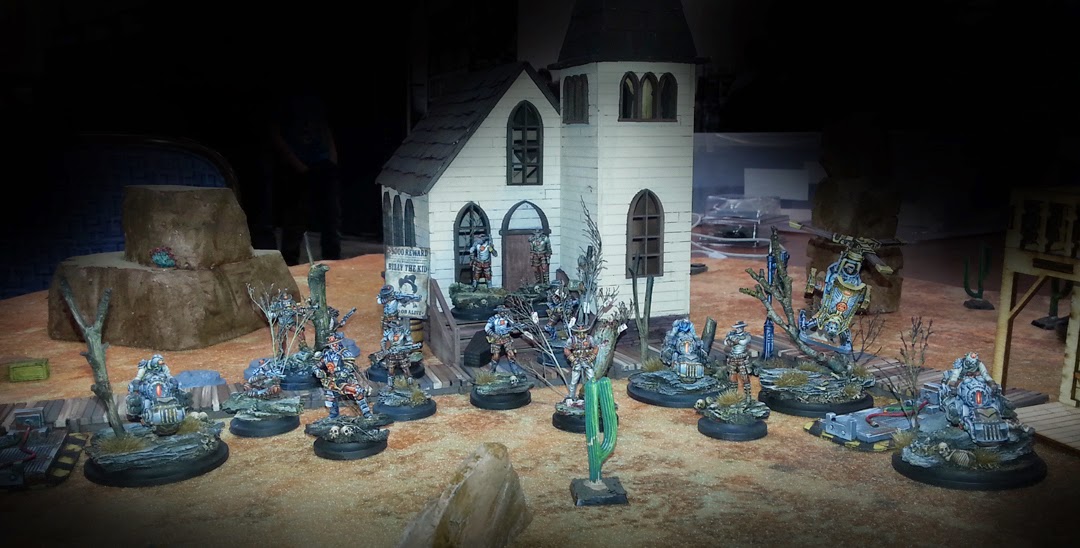 Jesse brought a number of heavy hitters with him, including the Apache Kid and the maniacal doctor Long Tree.  The Outlaws feared his brand of Bad Medicine with good reason.  More than one of their number had been 'cured' by the doctor, soon followed by eternal rest! 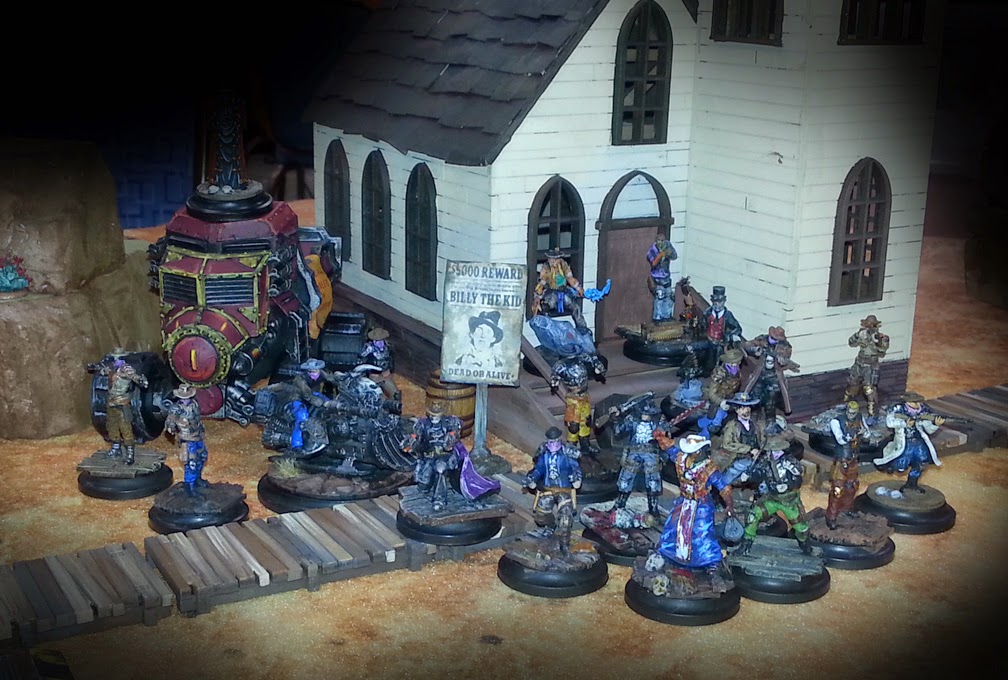 True to his word, Judge Stern had placed the lifeless body of Billy in a pine box, and left it out on the steps of the church with the wanted poster that declared the price on his head.

Little did the Judge know that Dr. Carpathian had promised Jesse that he would "fix" Billy if the body could be brought to him in a timely manner. 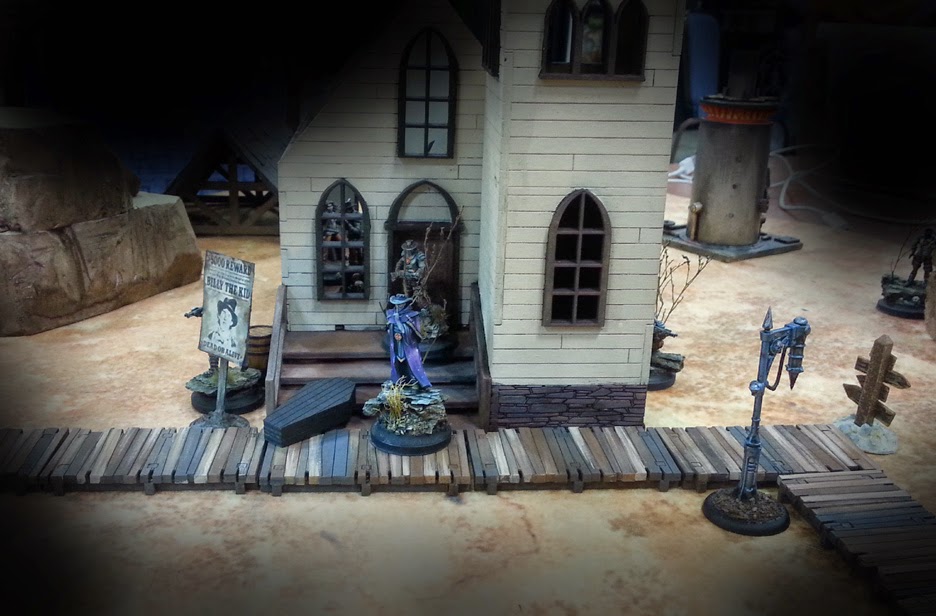 Jesse was quite sure of success, as a large number of replacement Interceptors had not been delivered on schedule.  As usual, the federal government did not consider that the 'capitol' of a territory did not deserve the same consideration as a full fledged state.

Even the deliveries of new weapons such as the Gyrocopter and the UR-31 were far behind.

All of these units were desperately making their way towards the town when Jesse and his crew appeared. 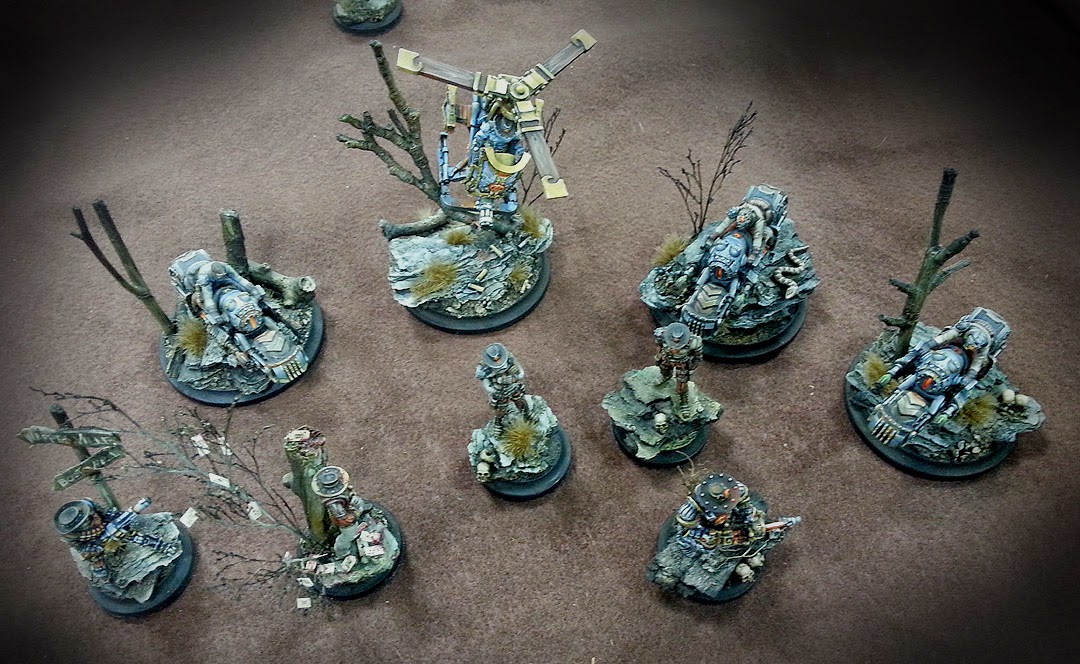 Here you see Jesse's full crew entering the town.  All that opposed them was Pat Garrett and a group of long rang hired hands.  This would be a new type of deployment for us, as we had not done a delayed entry before.

We really didn't know what kind of impact this would have, or if it would be too heavy of an advantage either way. 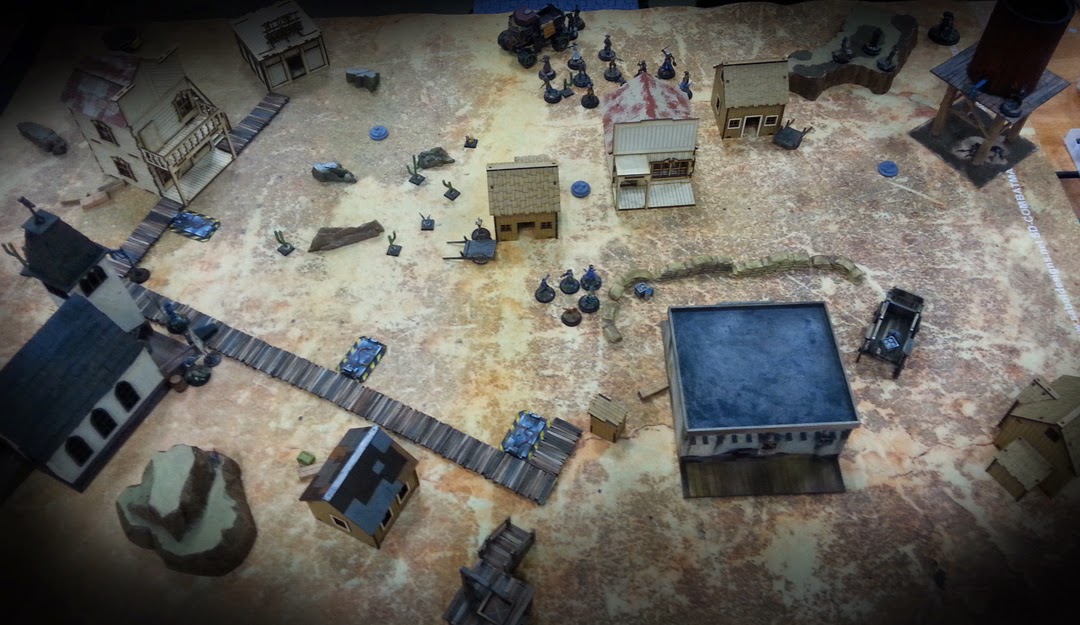 You see Pat and his sharpshooters deployed in and around the church.  They would have to hold off the full fury of Jesse until Doc, Berenger and the other heavies could get into town on the right.

The Preacher was organizing a big protest among the townsfolk, opposing the gaudy display of Billy's corpse in such a dastardly manner. 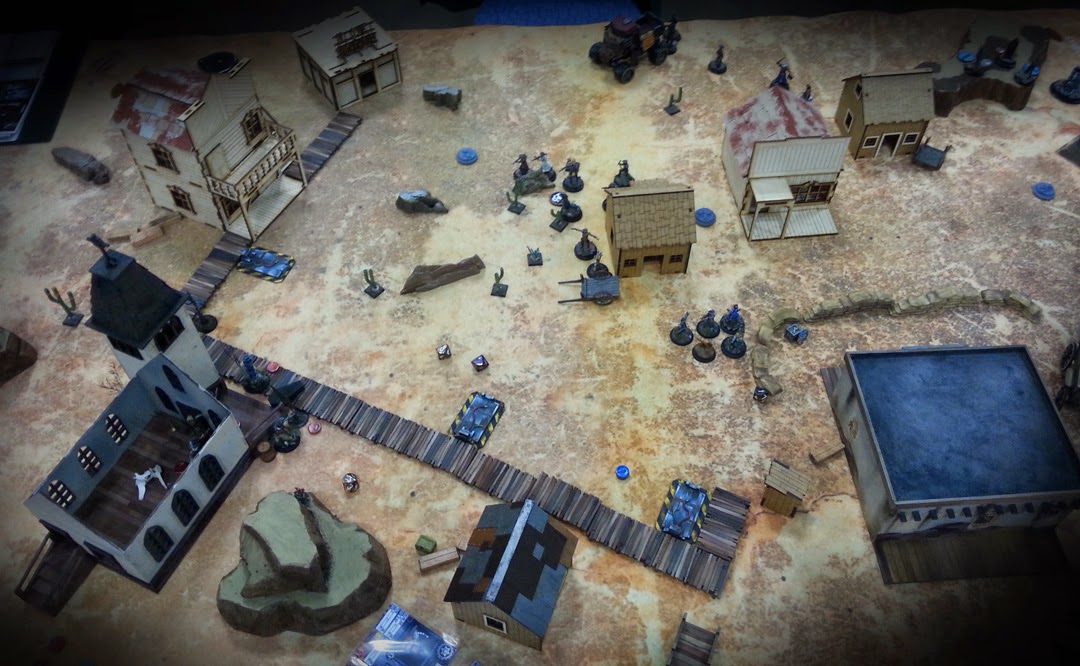 Despite the hail of lead, the Outlaws were able to get deep into town, only suffering one casualty. 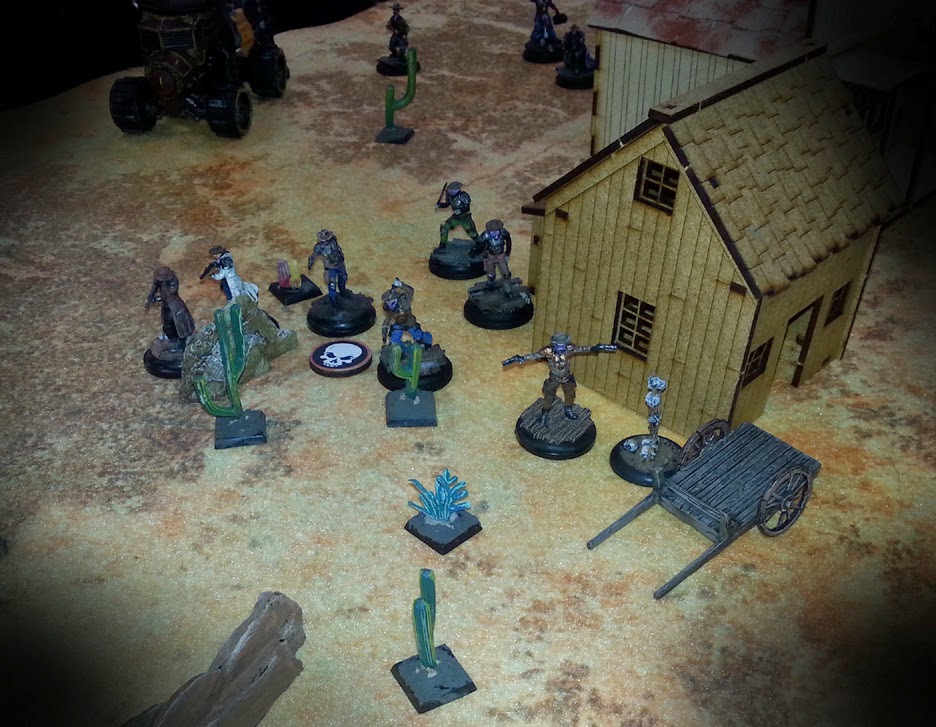 To make matters worse, Cole Younger had joined in the Outlaw gang, and he fired off some rounds of smoke to further obscure them from the shooters in the church. 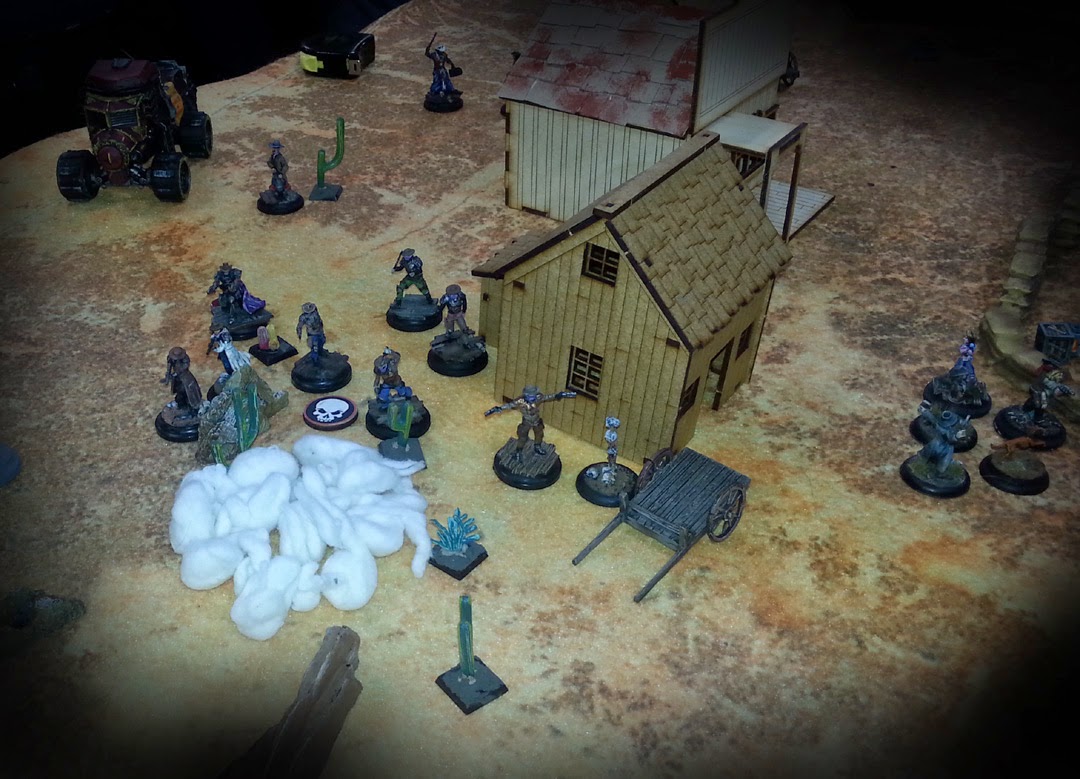 Still, the same stranger that had perplexed Warren Earp so greatly seemed intent that Pat Garrett should remain exactly where he was... 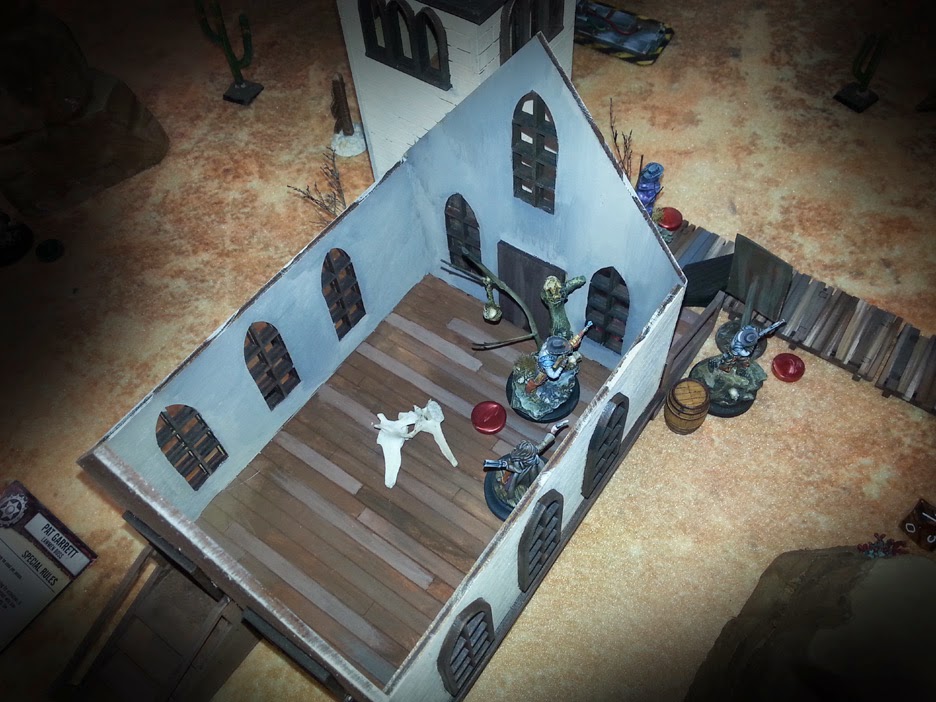 The Outlaws were supremely confident this time, as they knew that Jesse had not been defeated by the dreaded Lawmen. 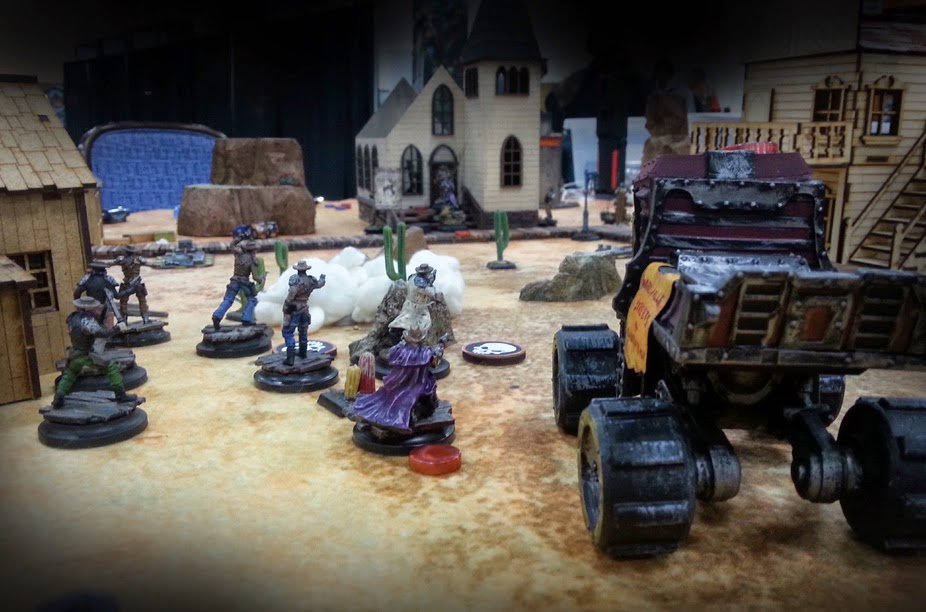 Those Outlaws who were not directly covered by the cloud of smoke were now shielded by the Preacher and his wife, who implored the Lawmen to give up the body of Billy peacefully, leaving newly rebuilt church unharmed. 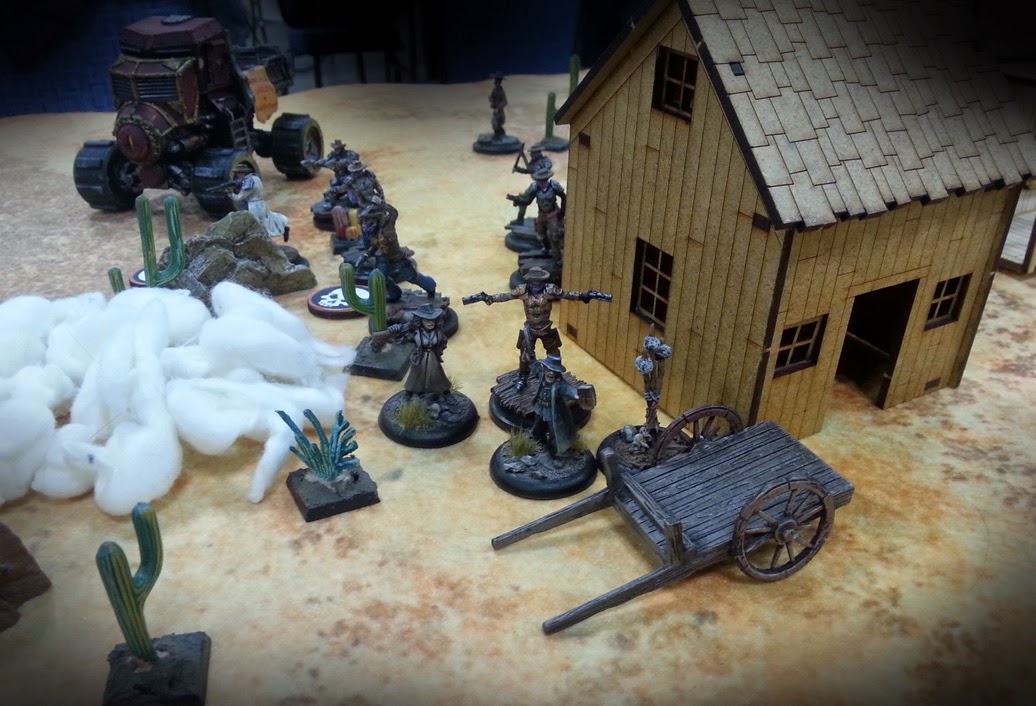 No sooner did his protestations leave his lips than another cloud appeared from outside the town.

This was a dust cloud kicked up by the advance of a number of RJ powered machines, including the mind blowing craft that floated on  odd looking 'wings', and a terrifying machine which walked as a man, but stared straight ahead with one giant red eye. 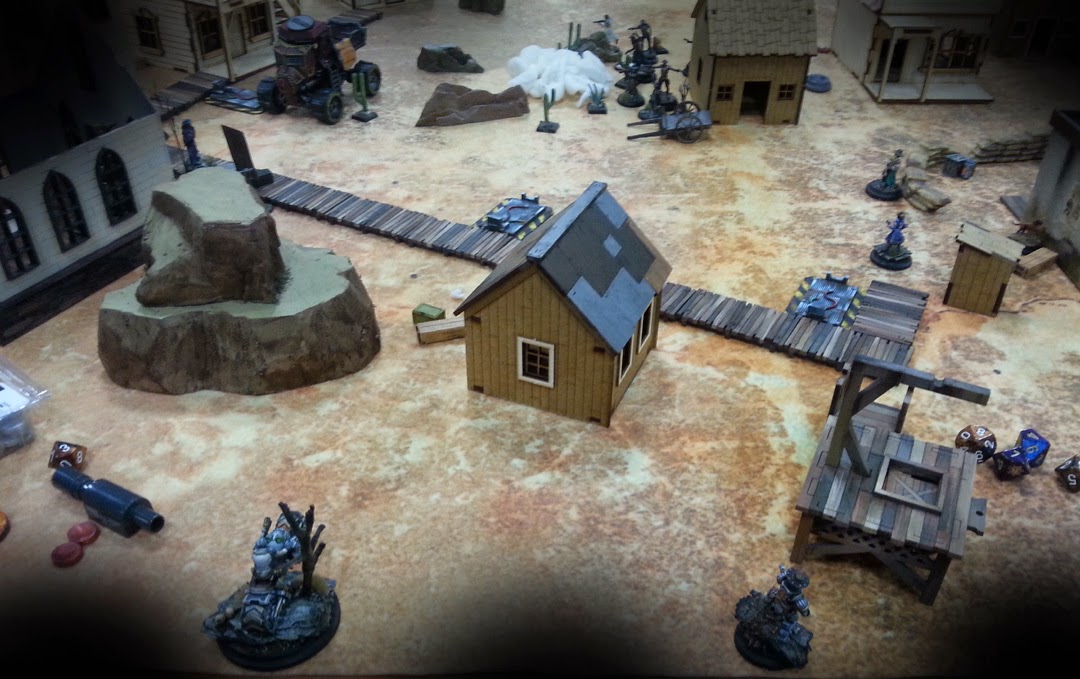 While a man might have been swayed by the Preacher's dramatic words, the monstrous device showed no emotion whatsoever as it declared summary execution of those "aiding and abetting" lawlessness in Wappelville.

After only one blast, the Preacher and his lovely wife lay dead!  Slain by the ever increasing violence against which he had worked so dilligently.

Would Billy and the Preacher be avenged?

Would Dr. Carpathian have yet another chance at a new "creation"?

Find out in the next episode of the Stranger and the Pine Box! 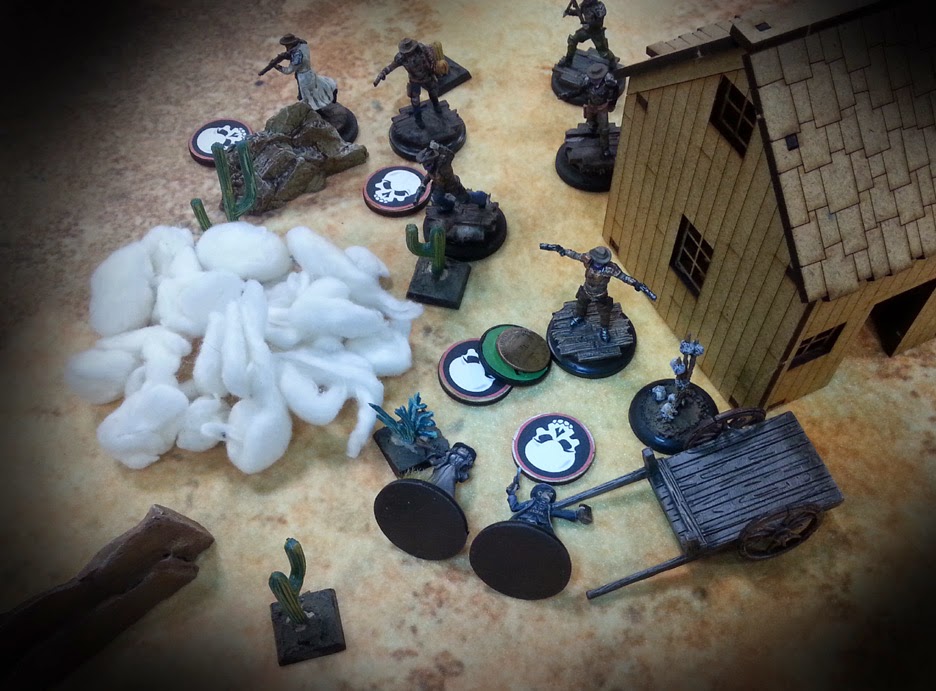