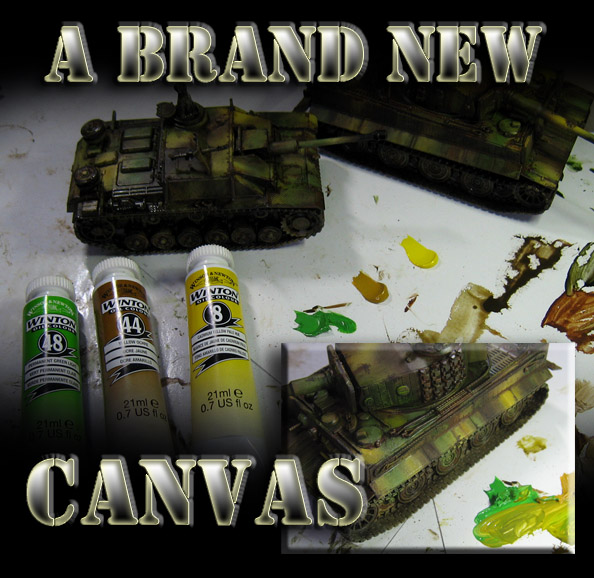 Following up on Episode Four, where I established the deepest shadow colors on the vehicles and shaded all sections of the camo pattern.  It is now time for the Great Experiment to begin!! 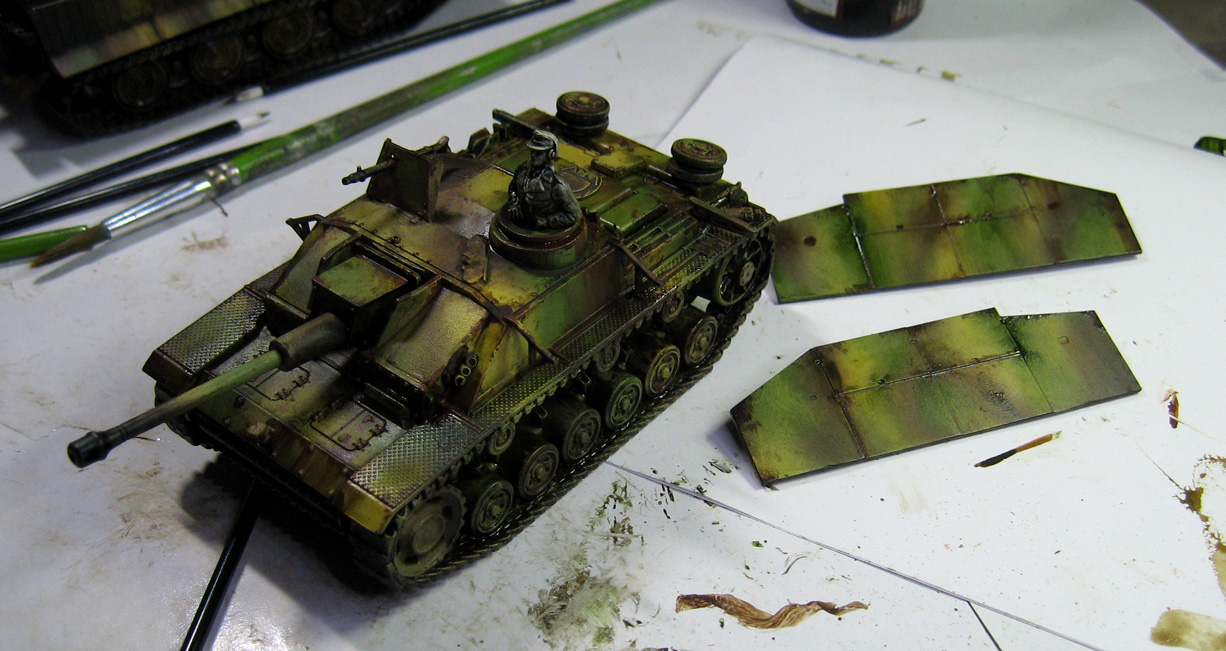 For the first time, I will use oil paints on a miniature and not a canvas.  In fact, it's been at least 20+ years since I worked with oils, so this will be quite interesting!

I purchased a basic set of ten colors, which is all I will ever need.  Paint mixing is something I am quite used to, so all I needed were the essential ochres, thalos and cadmiums. 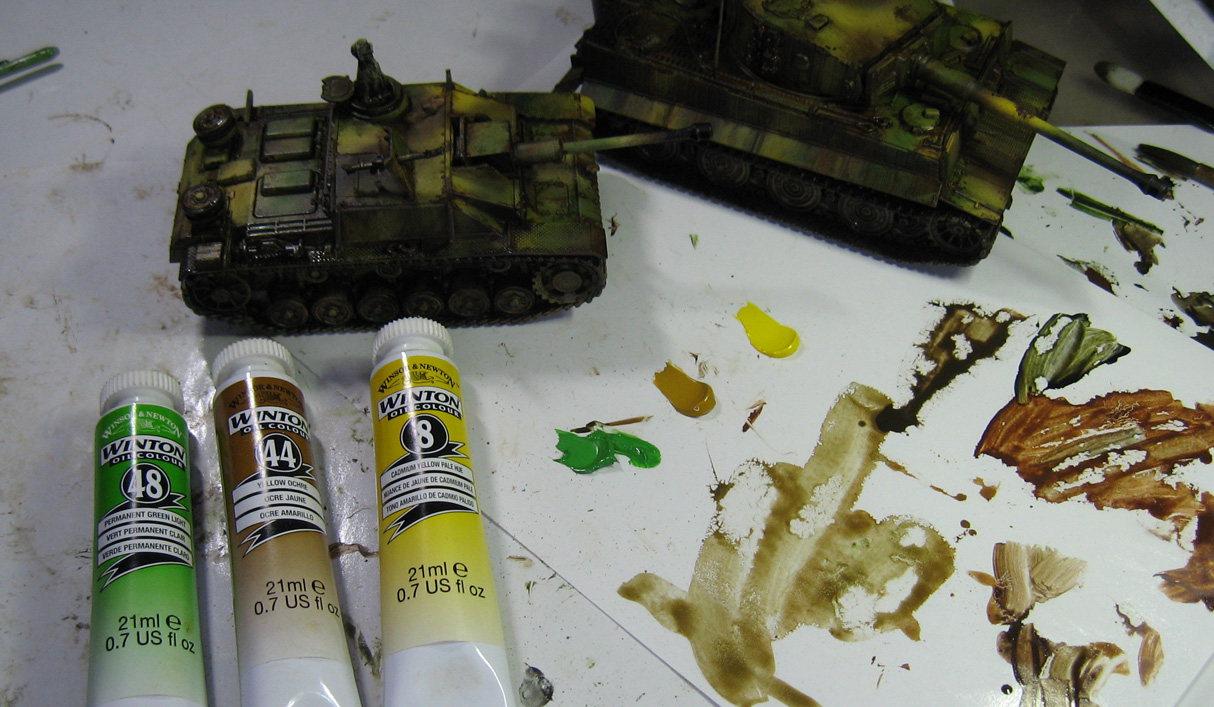 Since the darker washes are still "active", all I need to do is apply some paint, and start mixing it with the still wet paint that is already on the figure!  One important note... this thicker paint will stick to the surface since the underlying layers are very thin. 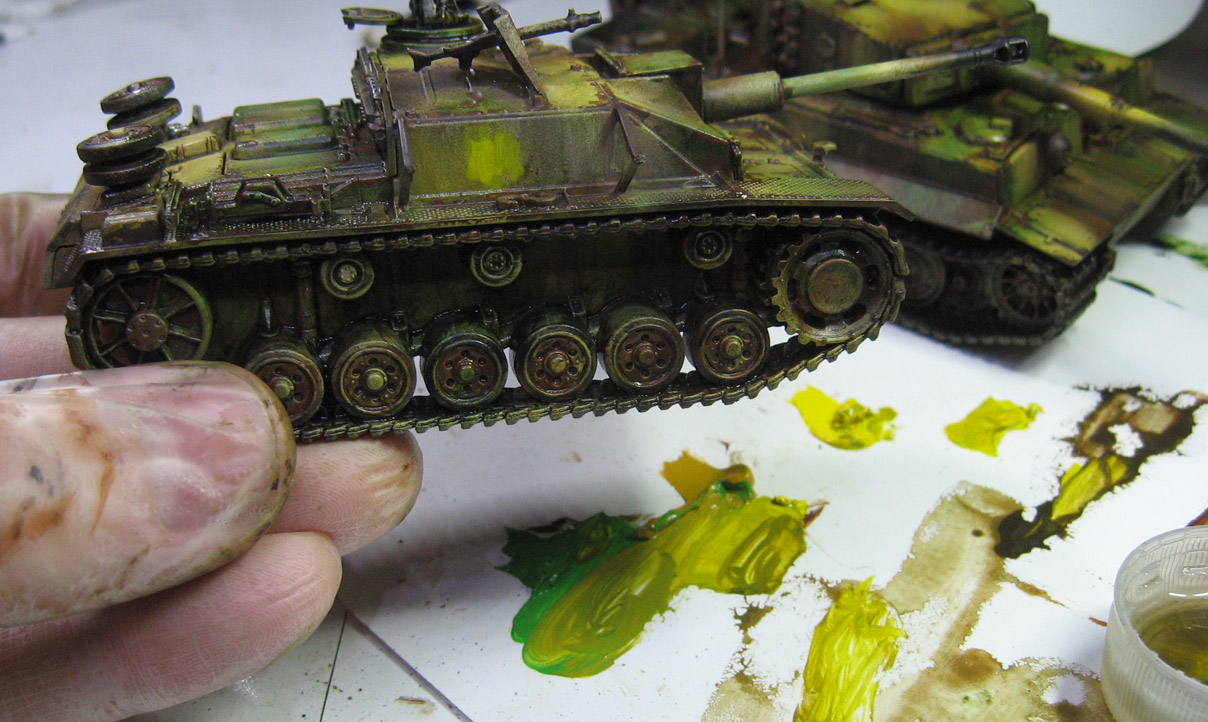 I used some left over filters to thin down the oil paint.  Those are mostly white spirits anyway, so it makes a great paint thinner. 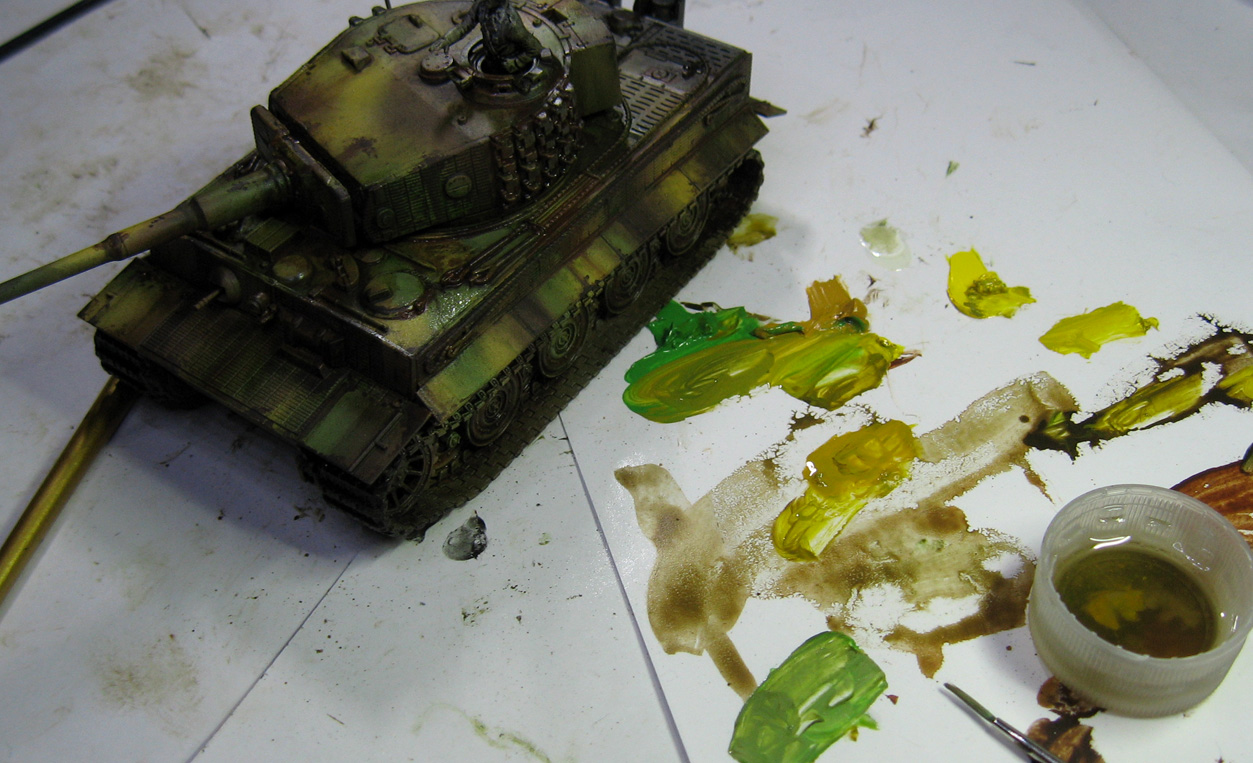 In this close up, you can see that I worked my way around the cables and other details, re-establishing lighter colors around them. 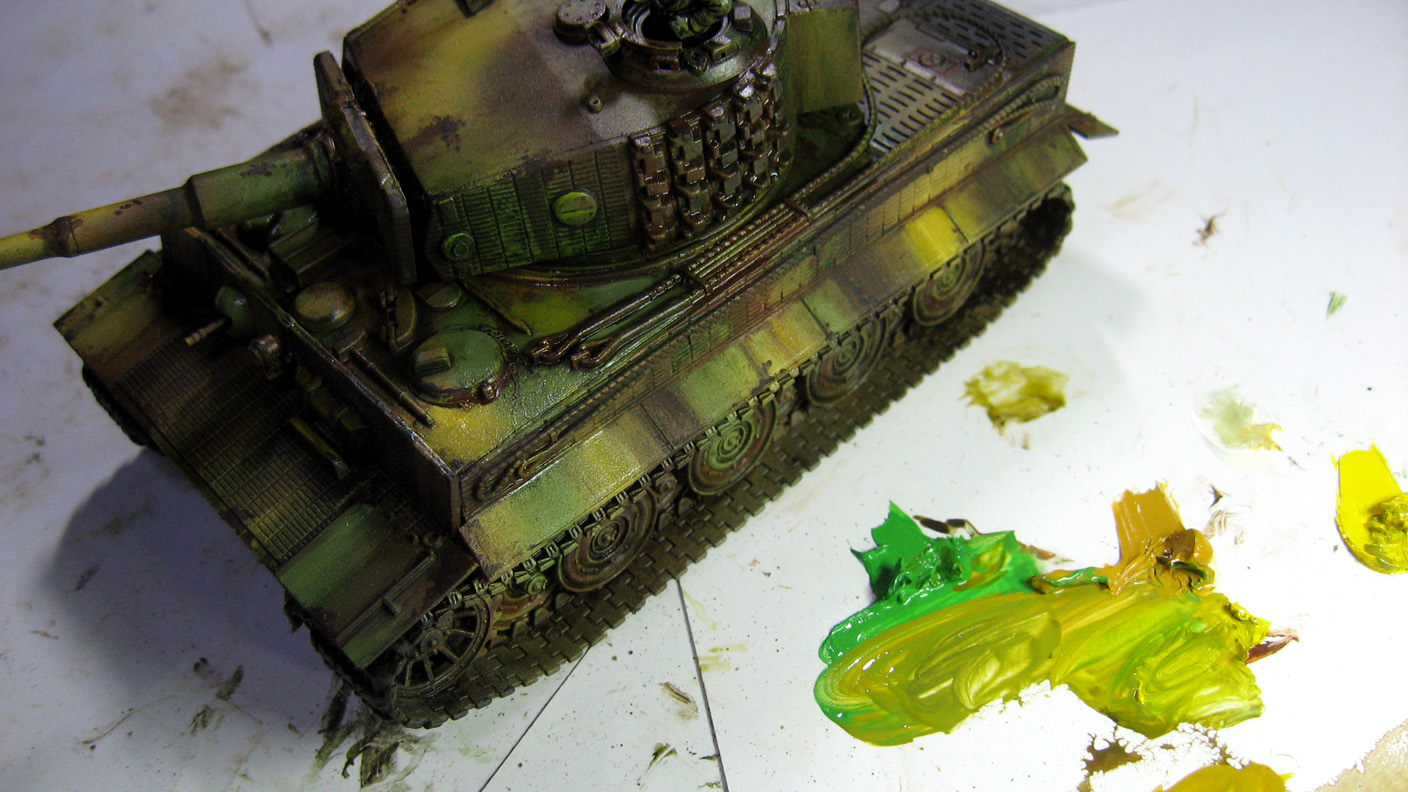 I was able to do some streaking on the mud guards, and all it took were straight line strokes moving downwards.  Also, I added some brownish grey metal colors to the spare tracks before moving on to rust. 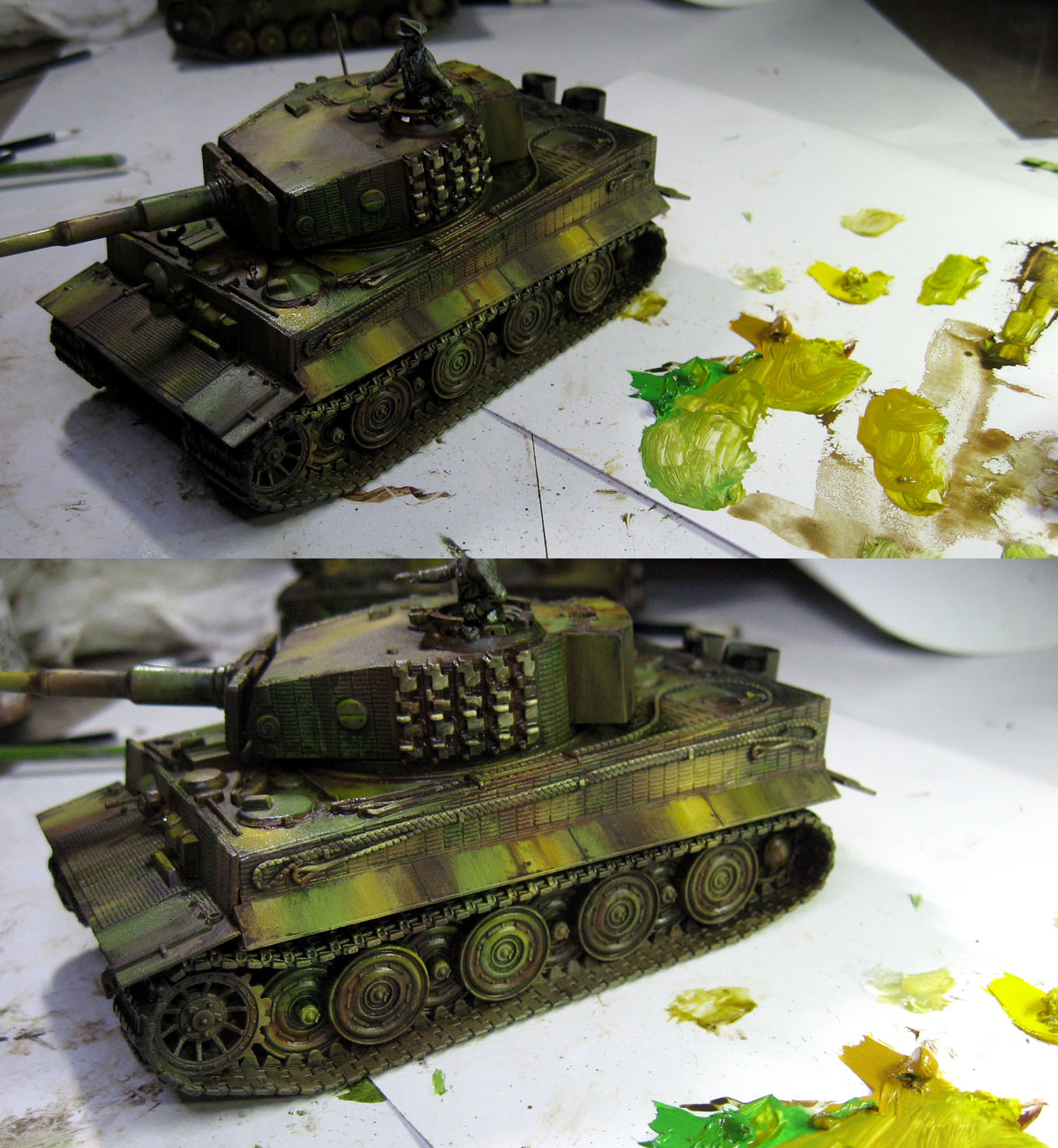 I didn't want to get too crazy applying the oils, so I let them set up for a bit before I tried to add decals.  The Hungarian tanks will have much more use of the oil paints, since that pattern has a much harder edge.

It will take a while for these paints to completely dry, but the places where I am putting the decals were not where I was painting. 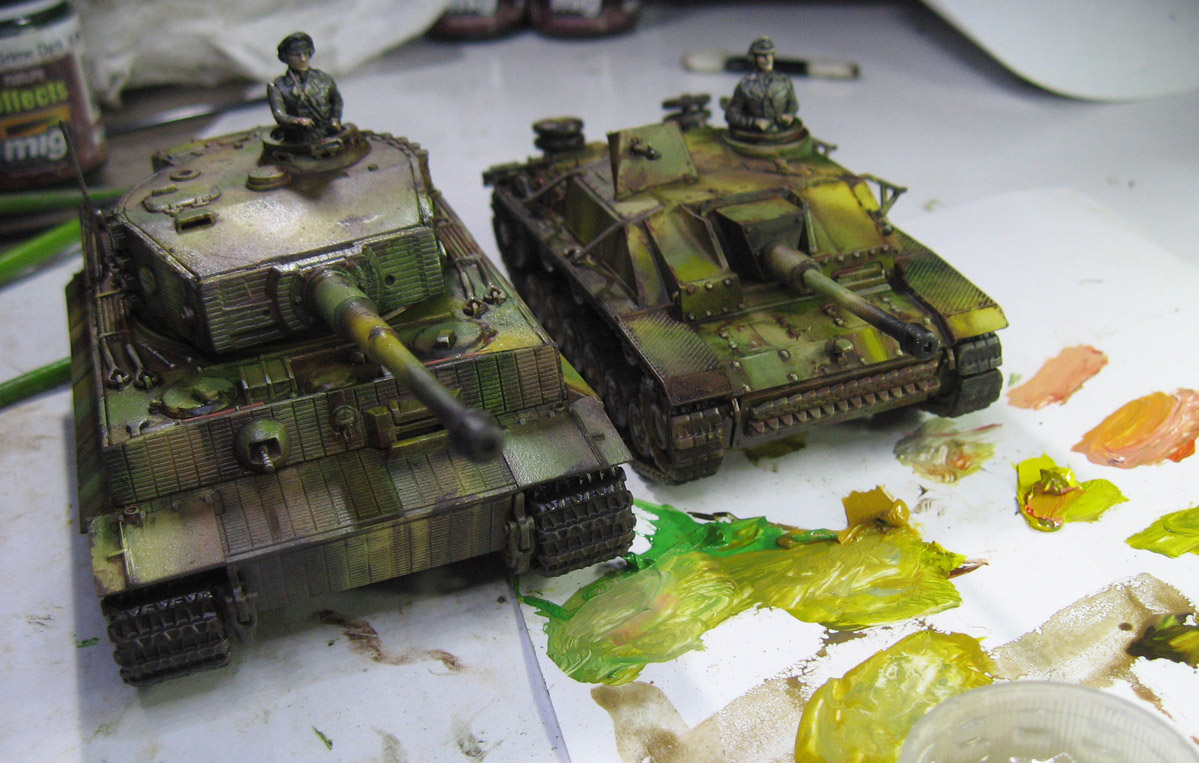 I think I might have to do a separate article on decals, since I have compiled a few key tools that make them much easier to deal with now.  For the moment, I will leave you with this image, and a tease that decal medium really does work!

Once these dried, they sank down into any crack or crevice, even the zimmerit. 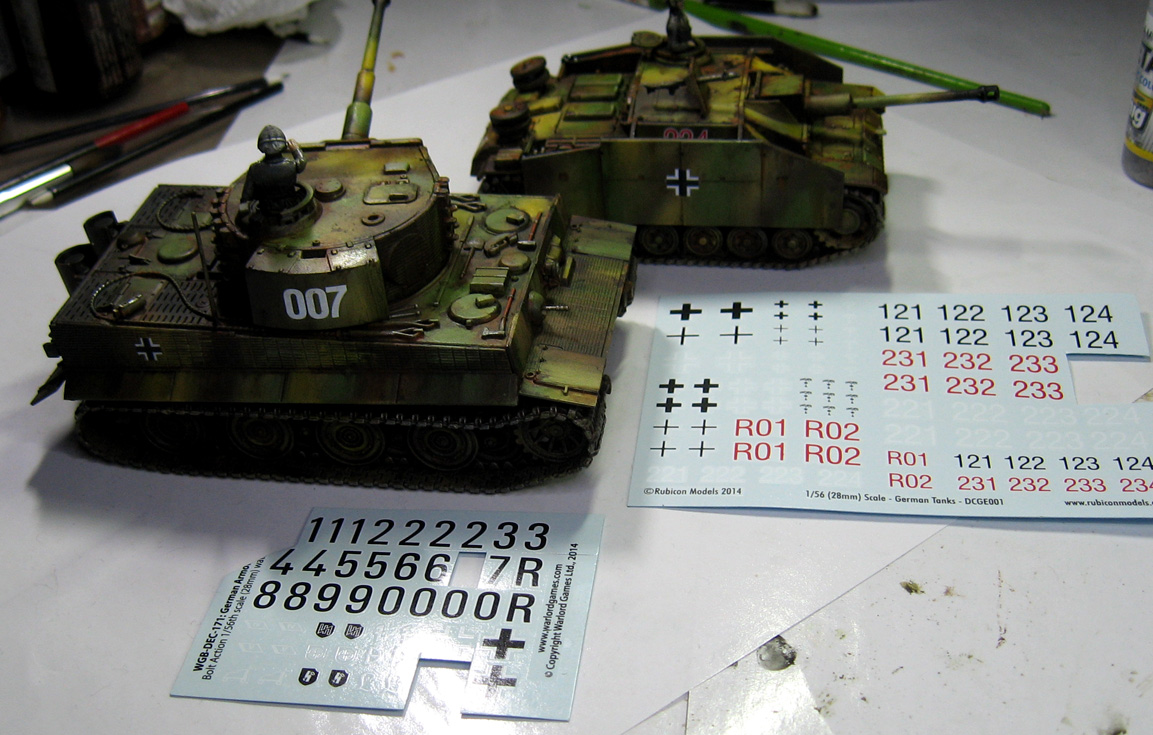 This version of the chipping will be a faster, more basic method.  While I will eventually work with the Mig AMMO chipping fluid, I needed to get these vehicles done in a hurry.  Thus, I will use the sponge method.

I chopped up a few pieces of blister pack foam creating rough edges to make that chipping texture.  Some of the chipping paint (acrylic) is placed on the palette, and then the sponge is pressed in.  The excess paint is removed with a few test applications on a paper towel. 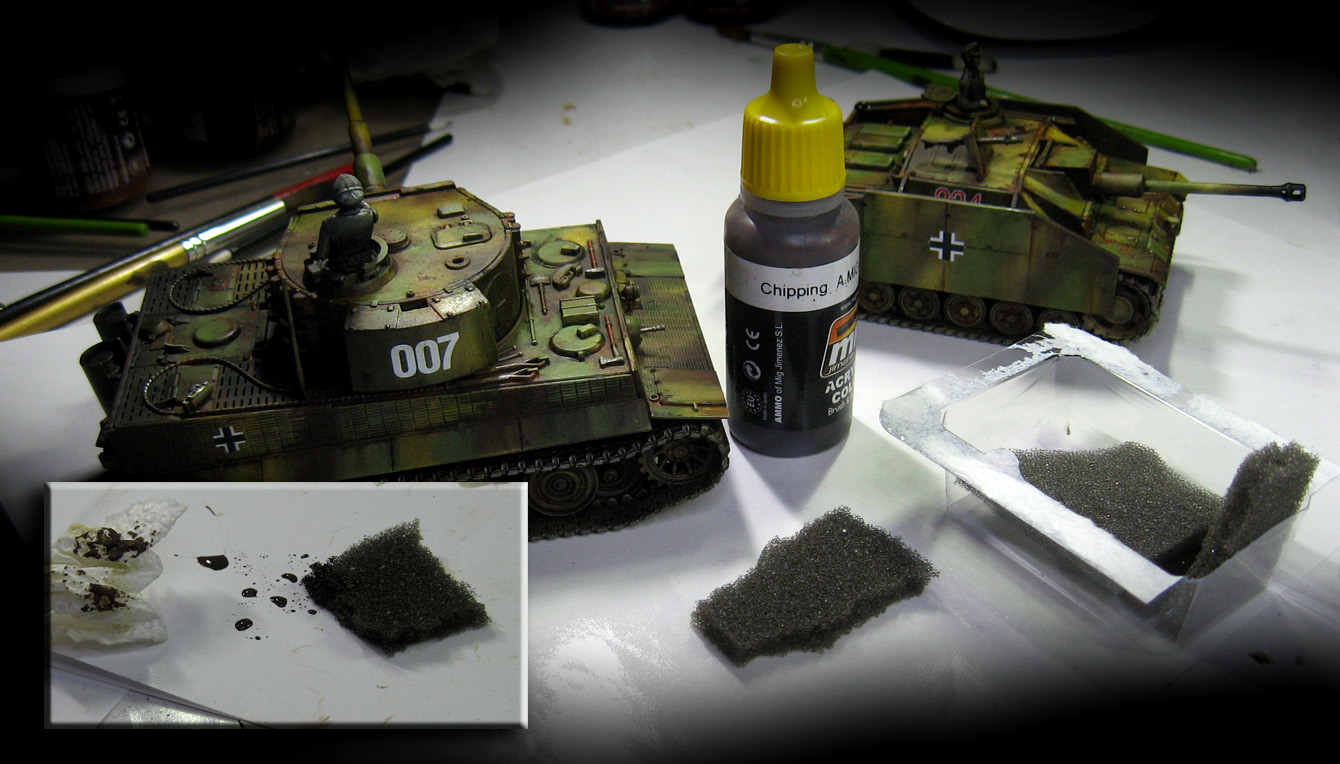 Here's a good example of the chipping along an edge.  I didn't want to get too crazy with this. 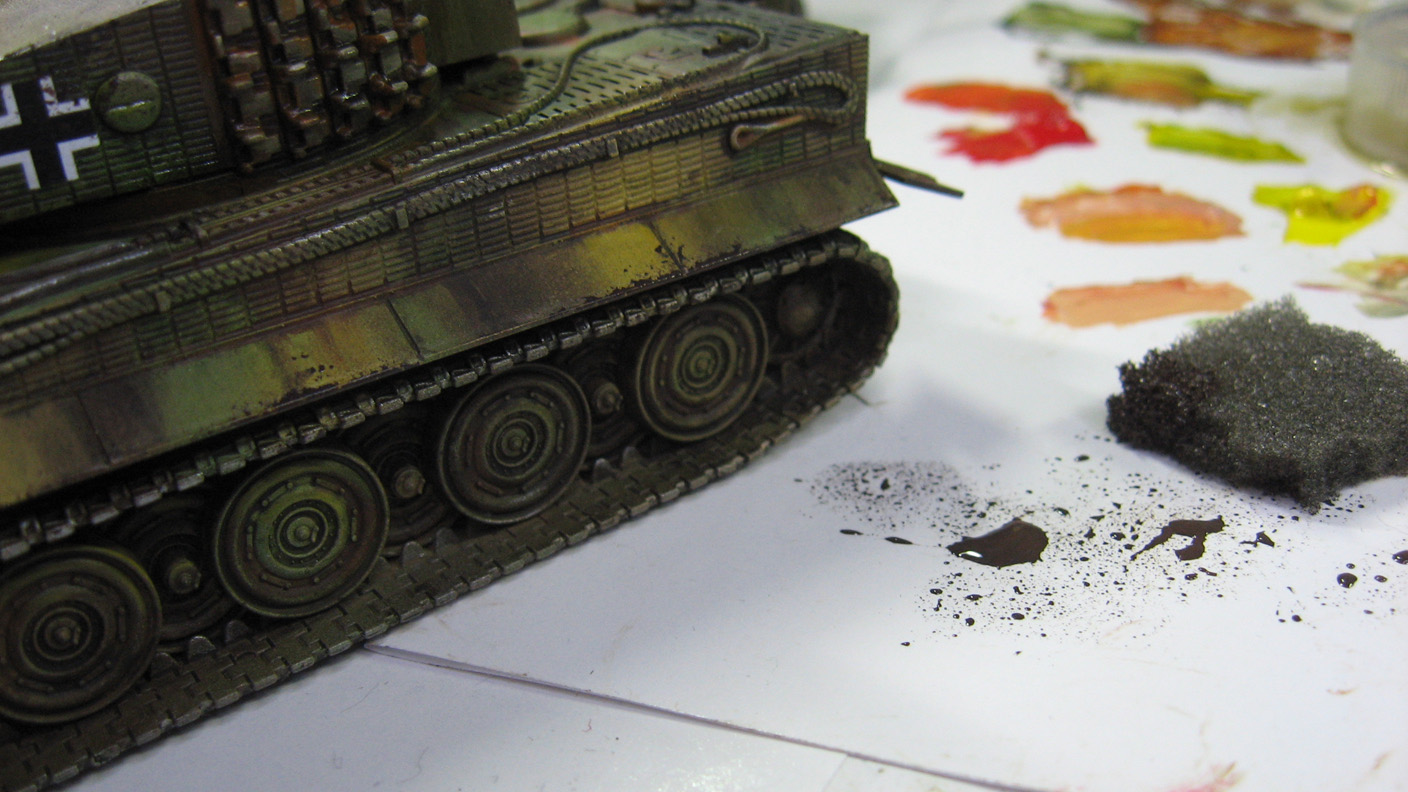 I have been looking forward to weathering these!  Keep in mind, additional weathering in the form of dust and mud will be done in later stages, so I have to make sure that I don't put too much of the chipping on there.

In the lower image, I used the smaller sponges to create scratch lines. 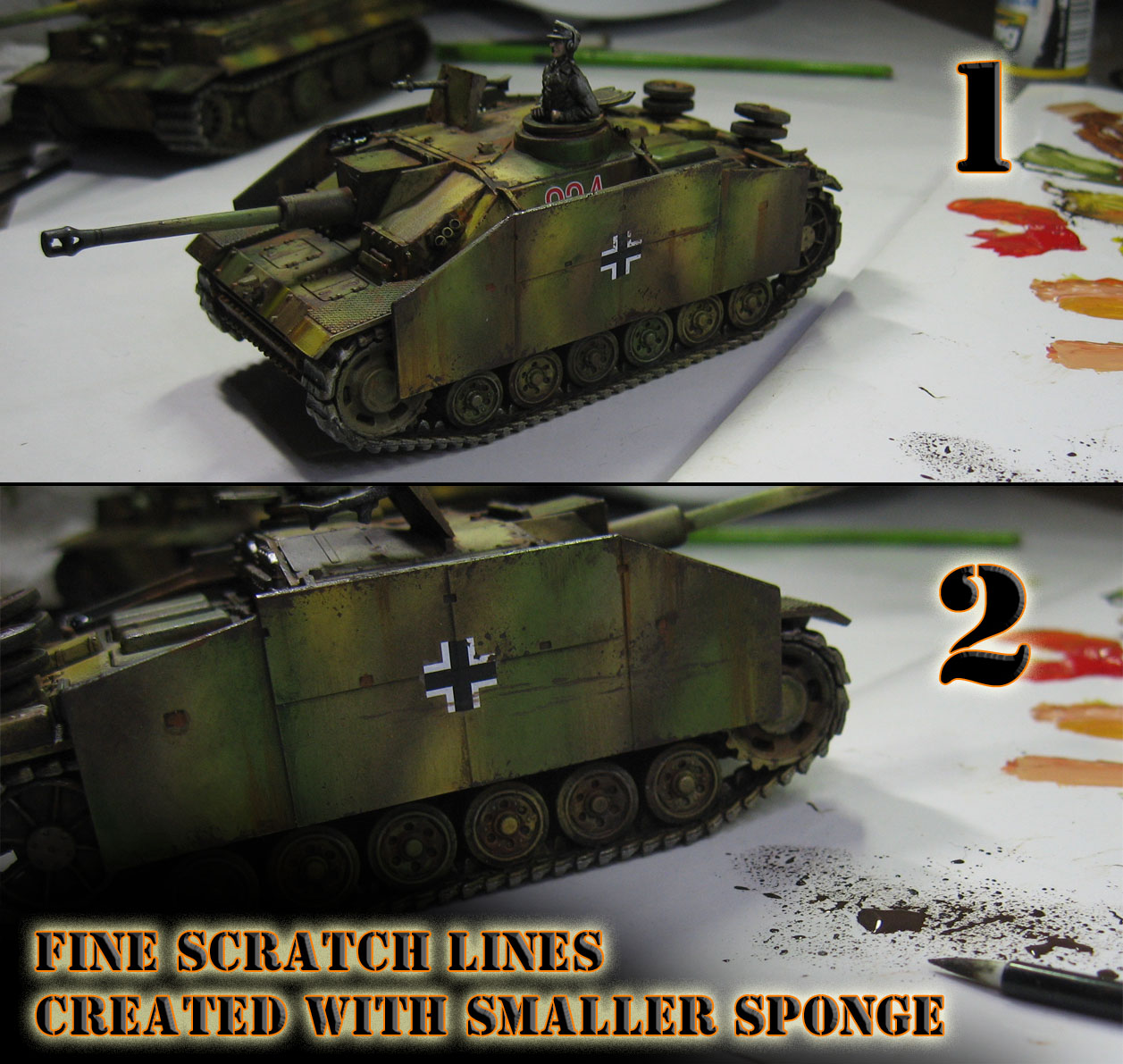 I also like to have the decals faded a bit by sponging on some of the background colors. 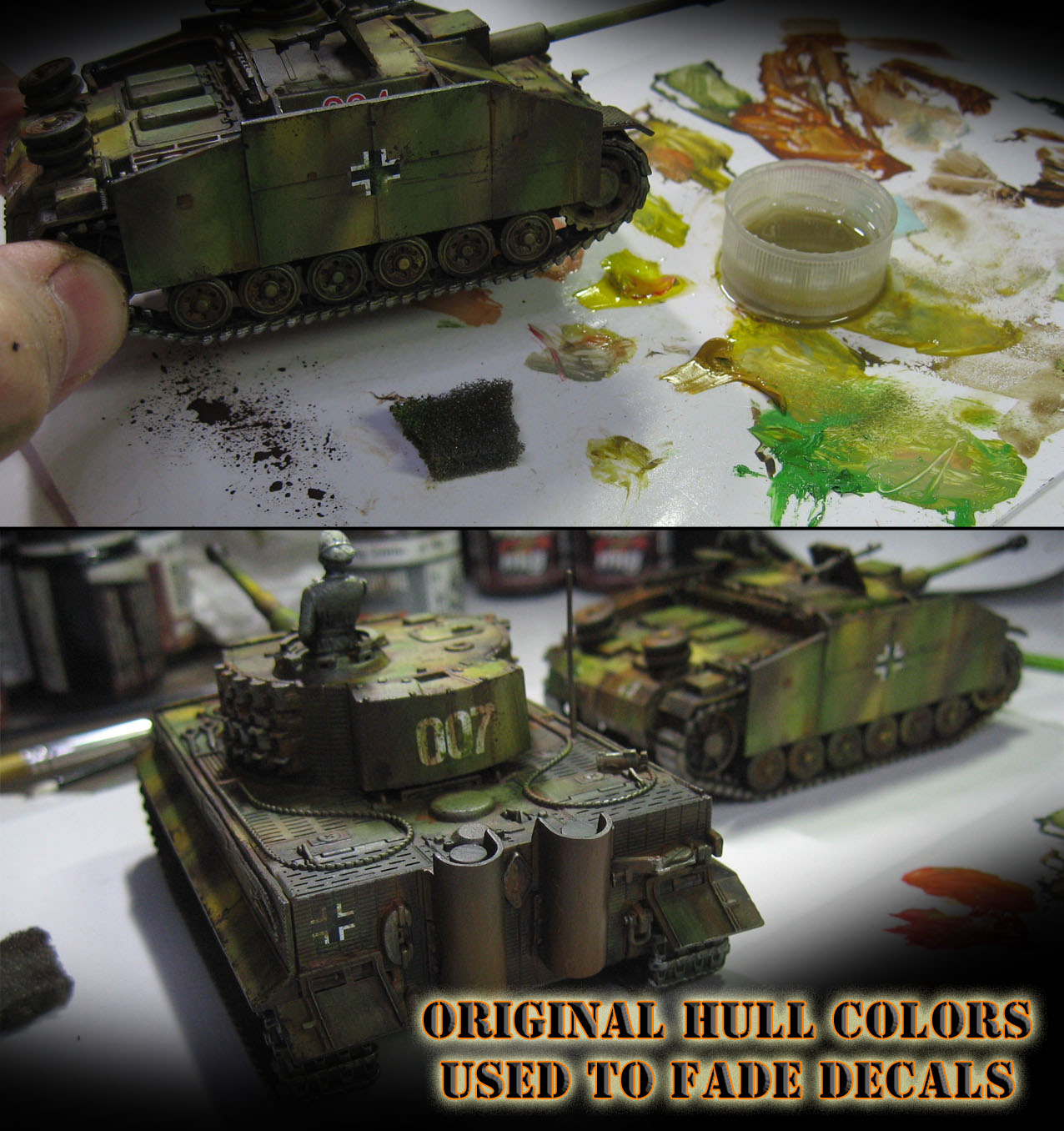 Once these processes were completed, I left the vehicles to dry and set.

They are now ready for a few more phases, such as painting the commanders, adding mud, dust, leaves and grass to the treads.  Stay tuned! 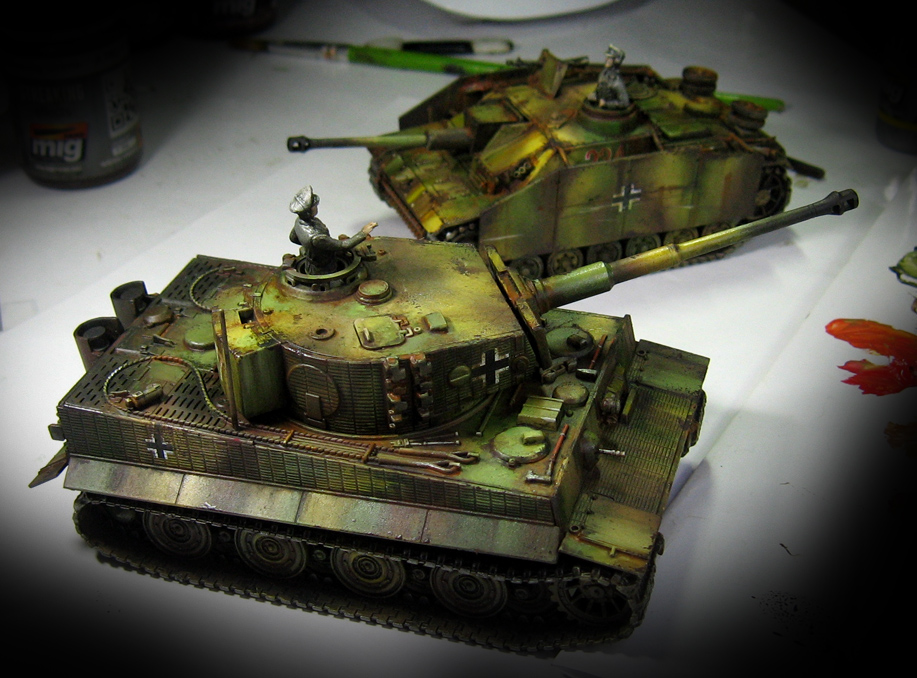