Riding along on the crazy train... 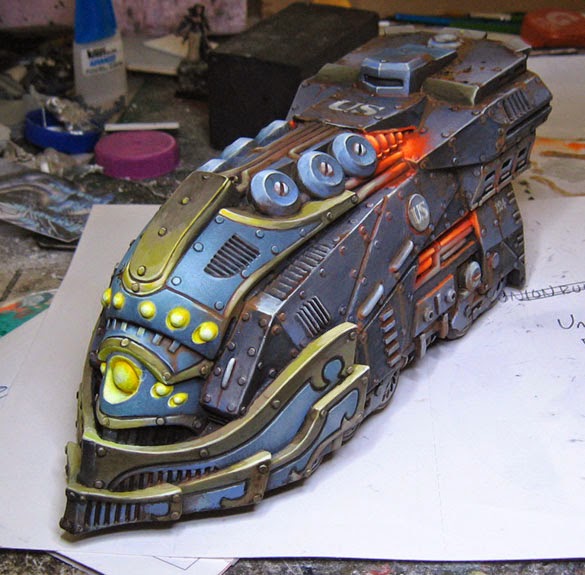 Back to the engine of the Siege Train.  I am getting more into the glazing at this point, which you see here, using some Reaper Grey Liner. 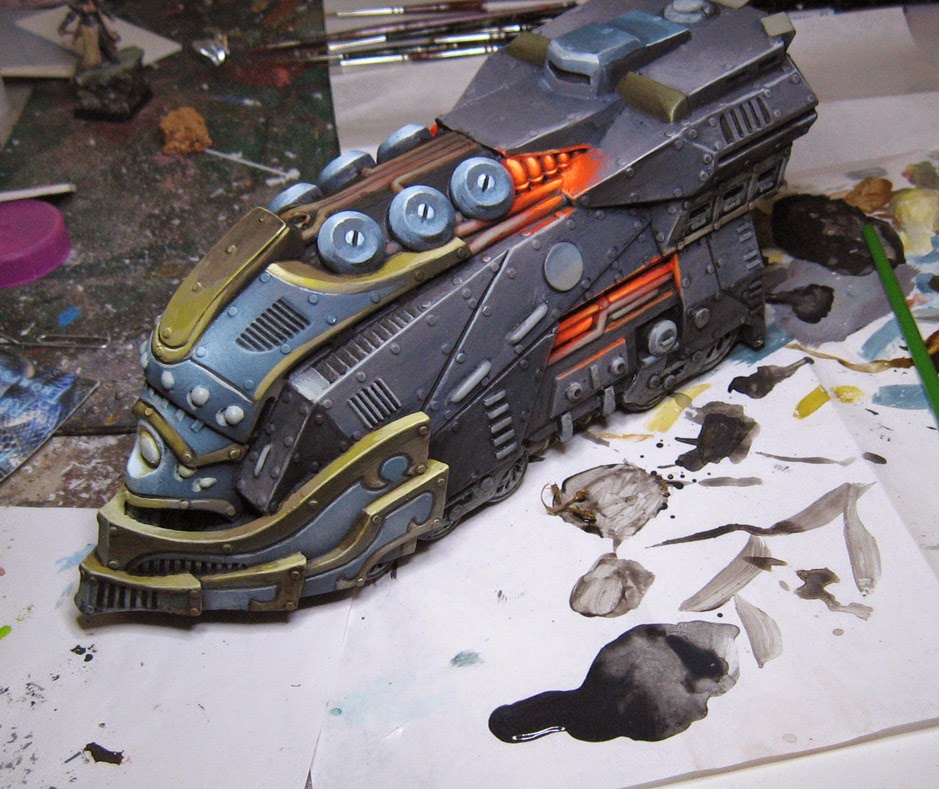 For the glow of the lights, I brought out the Vallejo fluorescent paints.  I used the yellow, which was for the most intense glow.  Around the edge, I used a higher chroma reaper yellow...

The idea was to paint the darker color transparently around the edges, to make the lights look lighter.

I also wanted to see what some rudimentary rust and weathering might look like.  There are some deep crevices on it, and I want to be sure that the rust does not look like red glow! 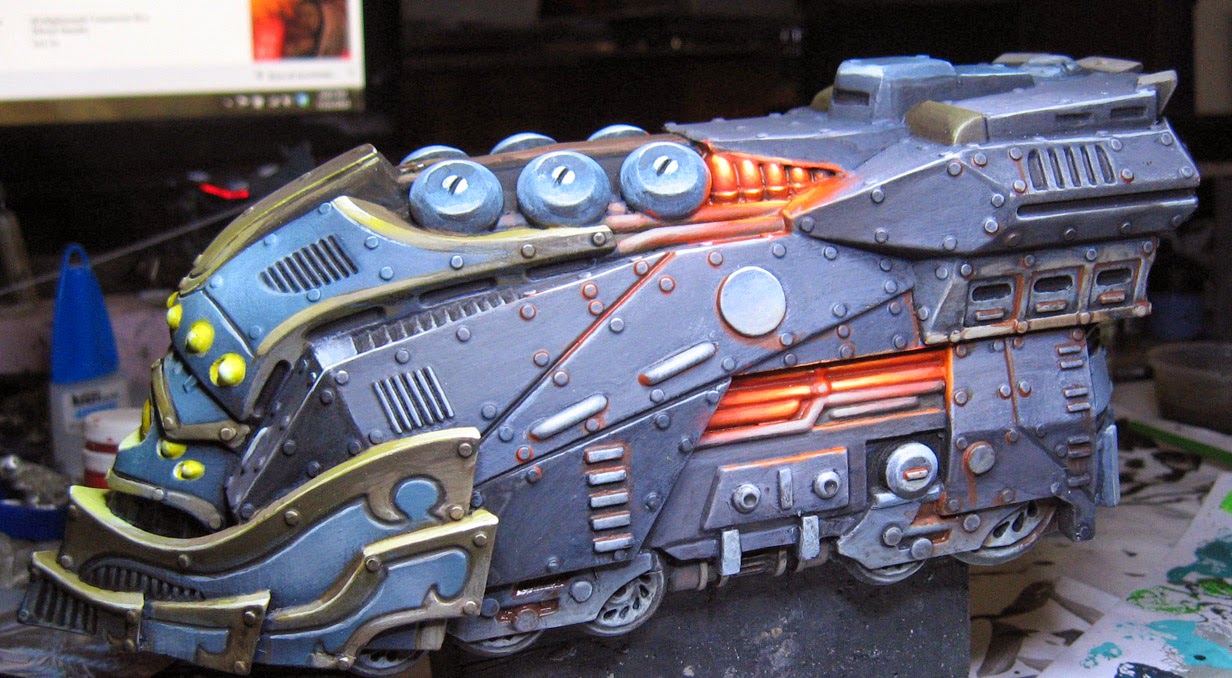 A bit more on the front section... working on some of the edges and details. 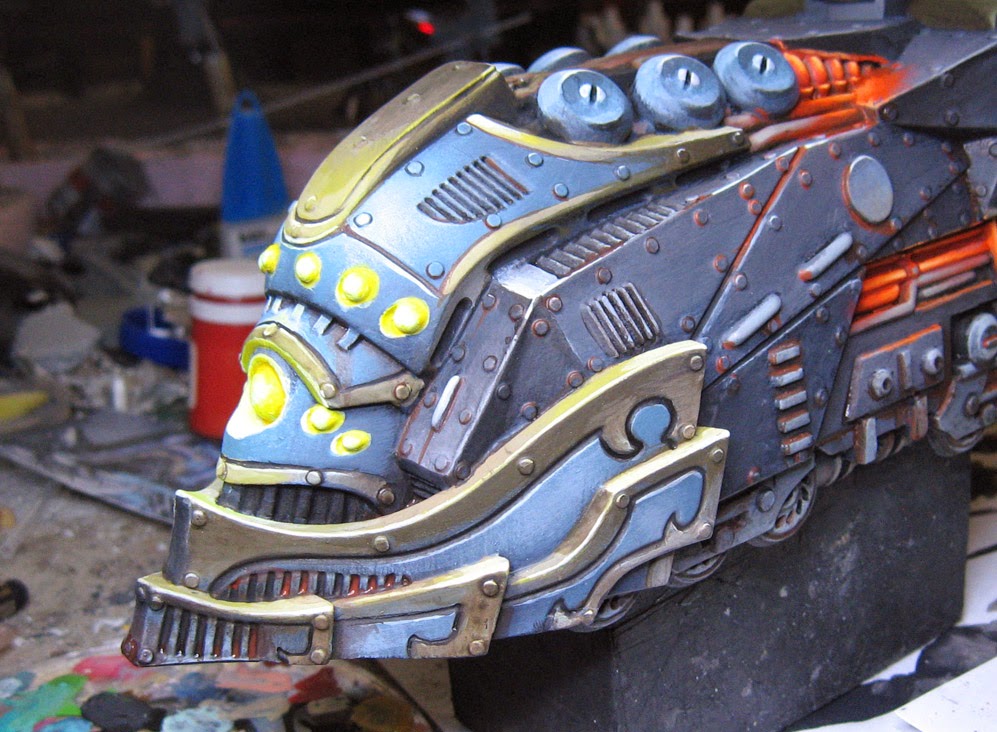 I also worked on the back of the train.  Weathering will be even more important here.  Otherwise, it will be a bunch of rather uninteresting grays. 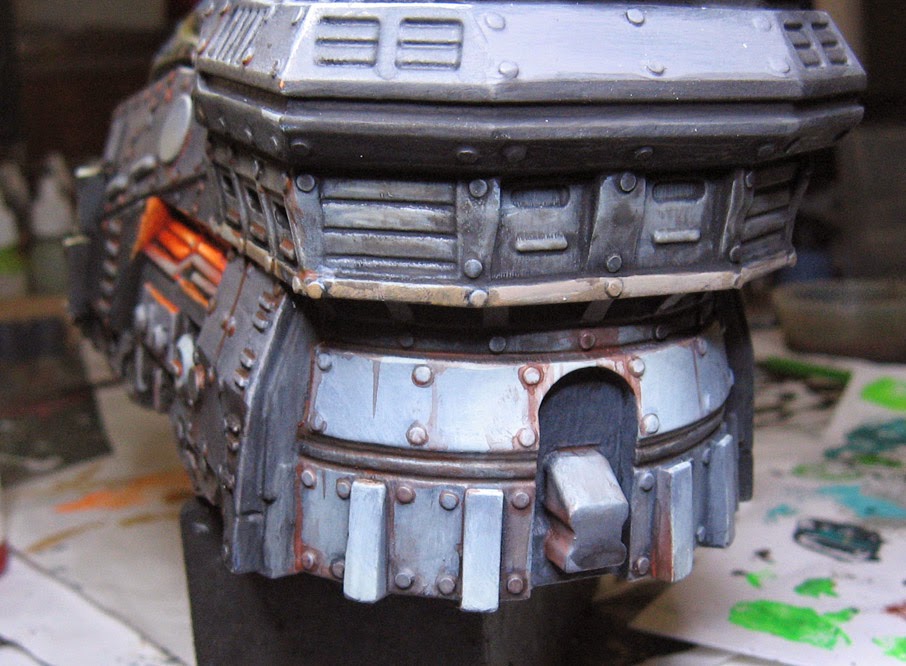 I decided that the roof of the train was going to need more weathering... and some freehand. 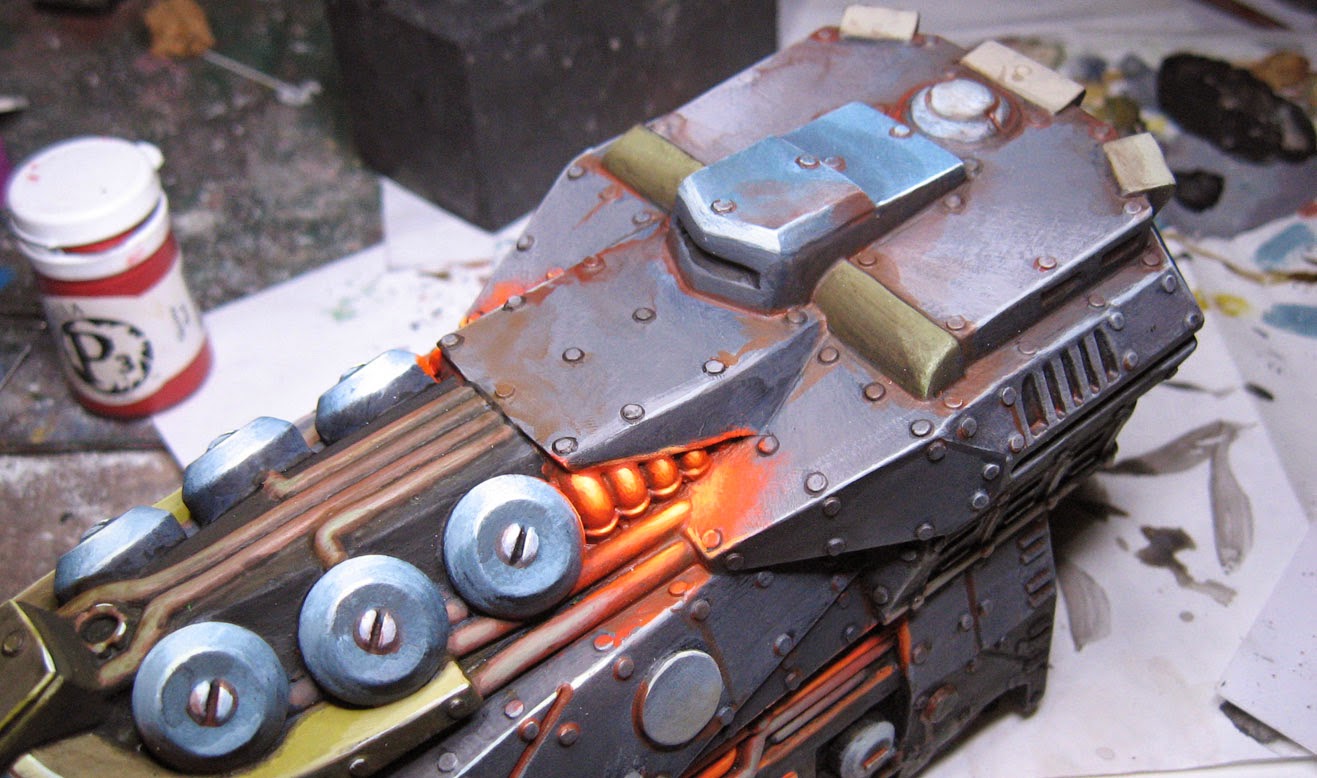 And here it is!  Since this is a Union Siege Train, I tried to make it like the US of the Union buckles. 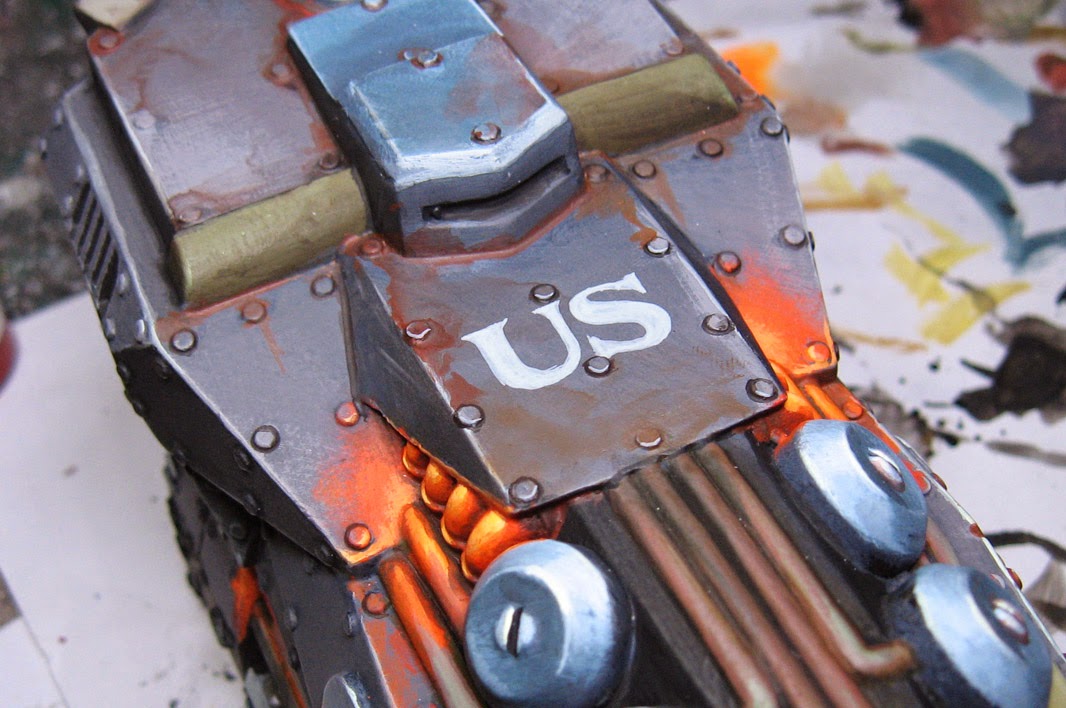 There will be other freehand as well, like these small numbers. 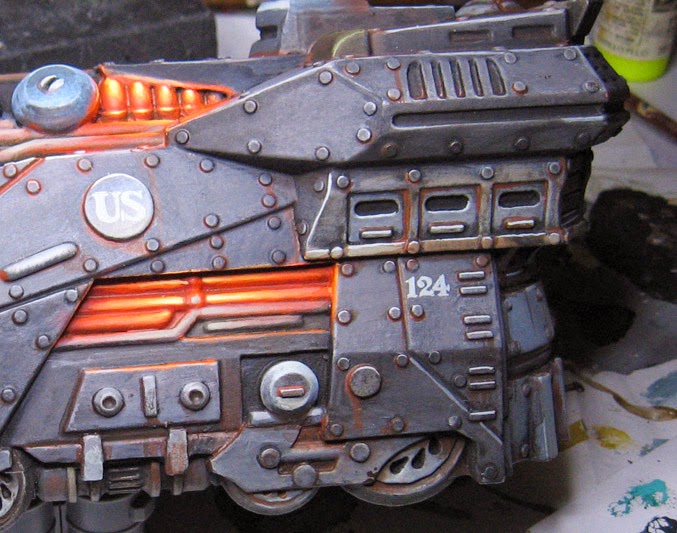 Some work on the upper conduits. 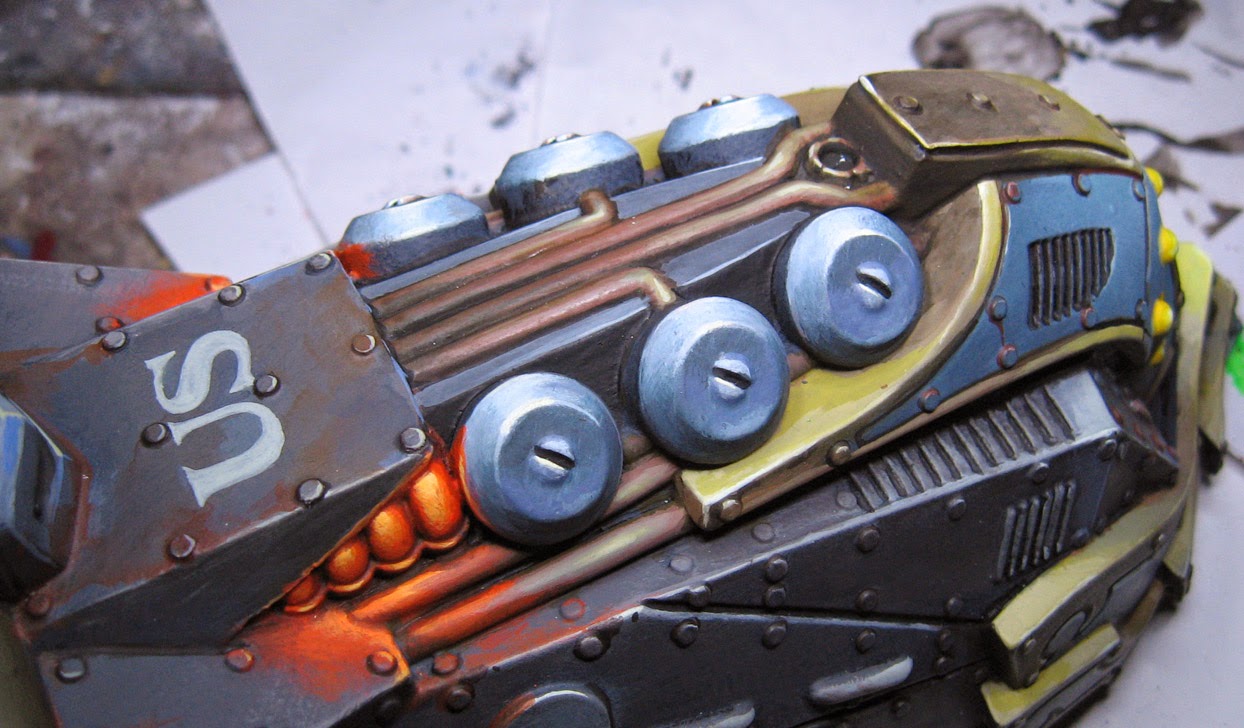 Cleaning up more edges, creating more darks here and there. 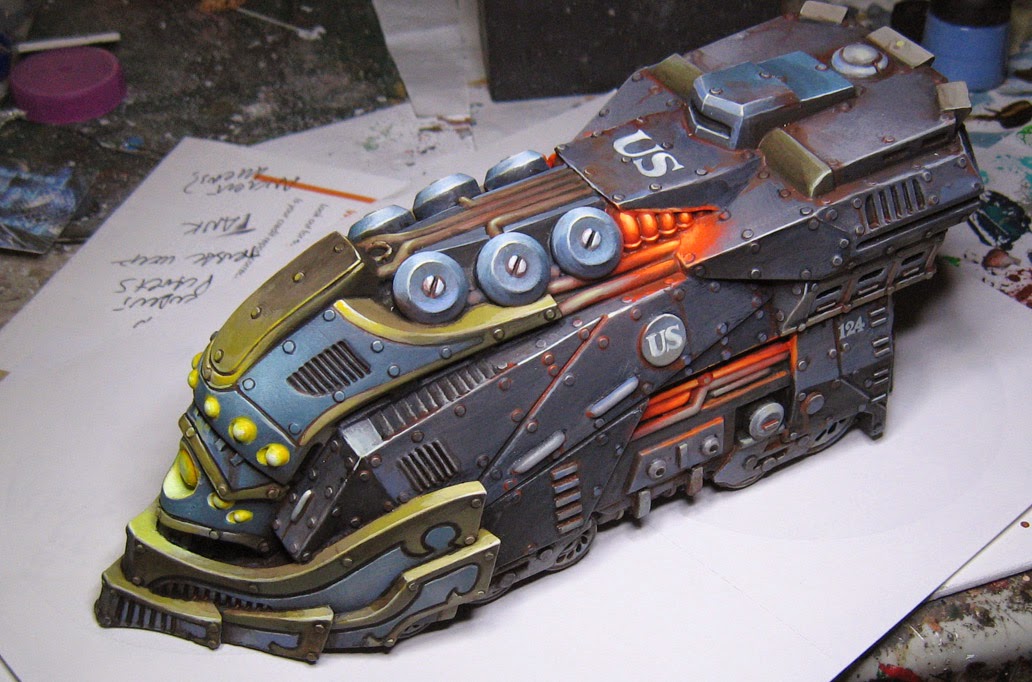 I thought it would be fun to put the Wild West Union logo on this side. 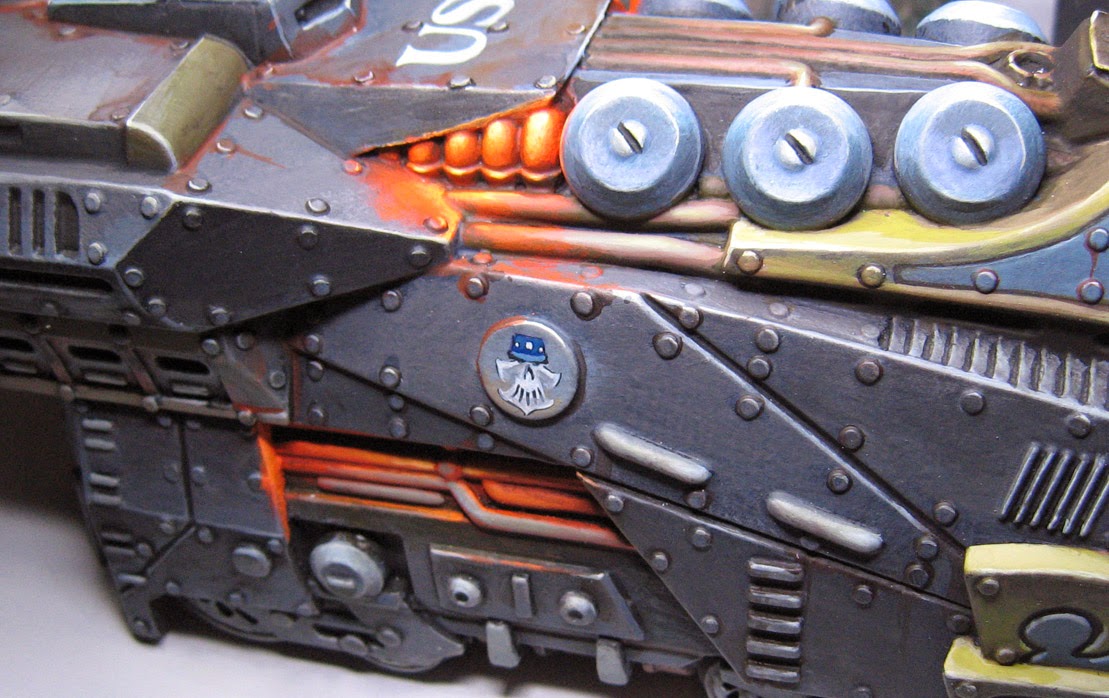 I put some more rust effects towards the bottom and the wheels.  I don't want to get too crazy here, since I want to wait until the other sections are painted to this degree... and the rail sections as well! 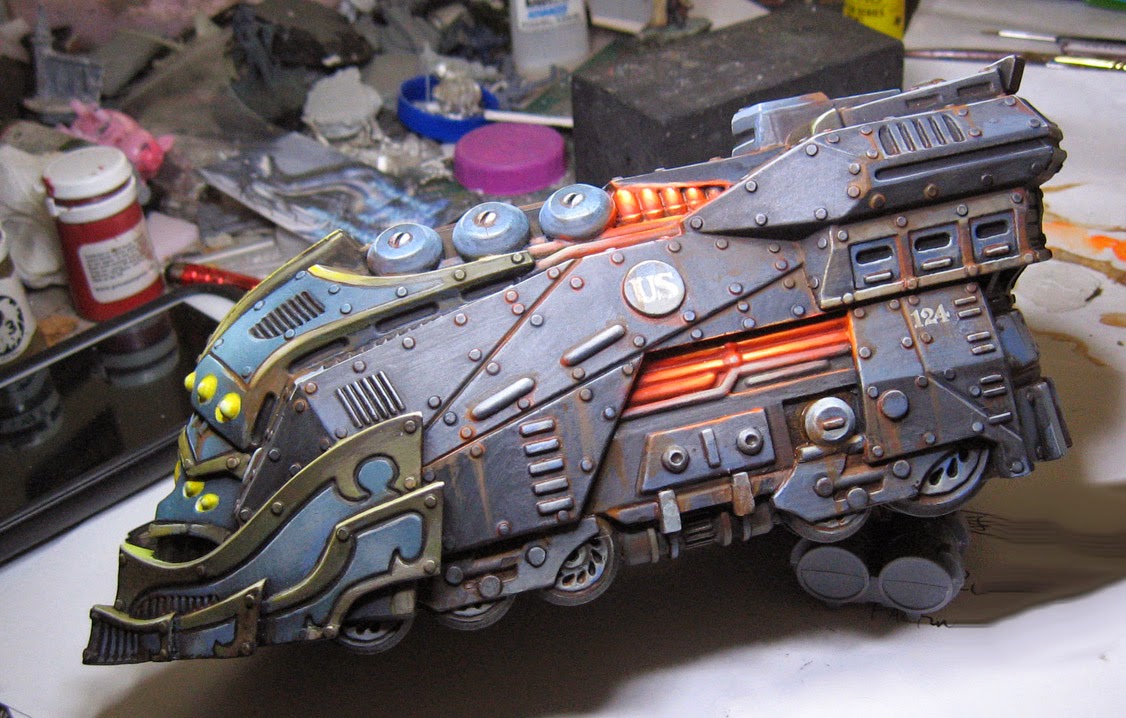 Some rust effects on the roof! 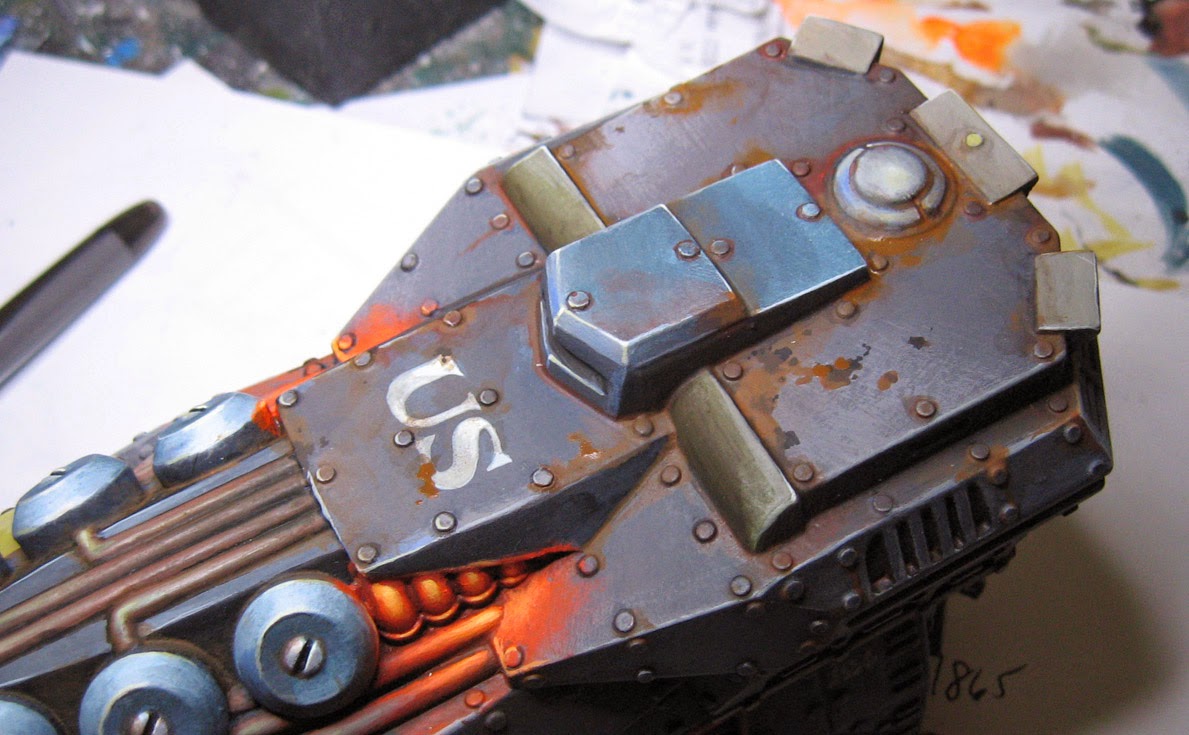 Where it stands right now.  Time to bring the other sections in line with this one! 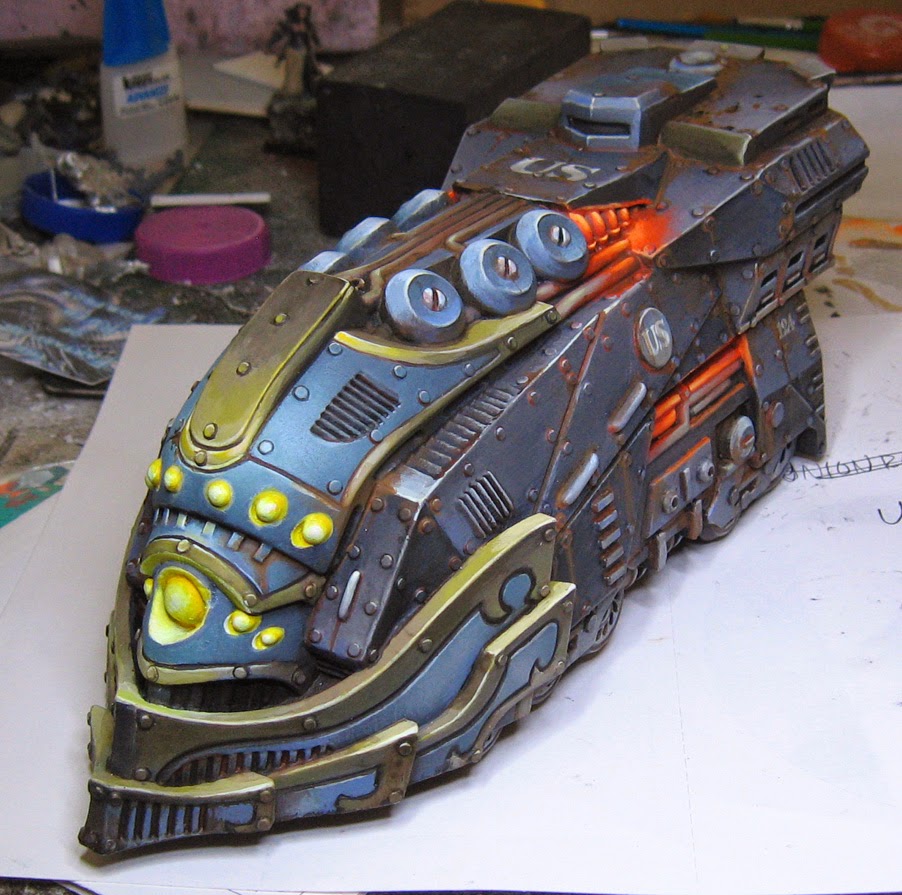 Posted by wappellious at 2:50 PM 8 comments:

They get into everything... 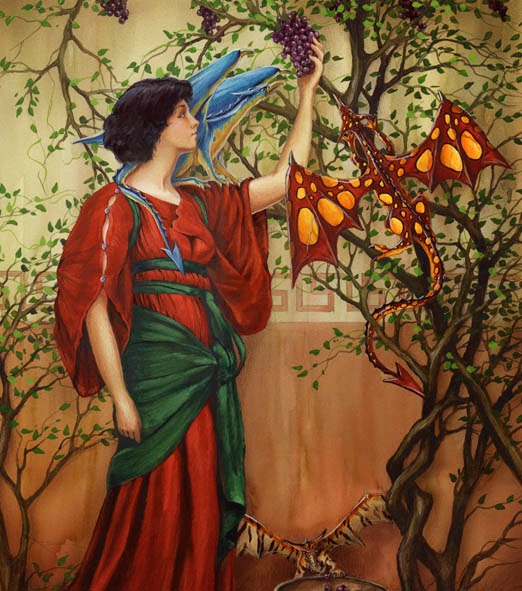 Just like the Arthurian series, I had been trying to find all the images from the homage to John William Godward, one of the last of the Pre Raphaelite artists.

At long last, they are discovered!  And I forgot at least 2 of them entirely!

This was actually one of the last of the series, called Caught in the Act.  Yes, lots of marble, and pesky baby dragons! 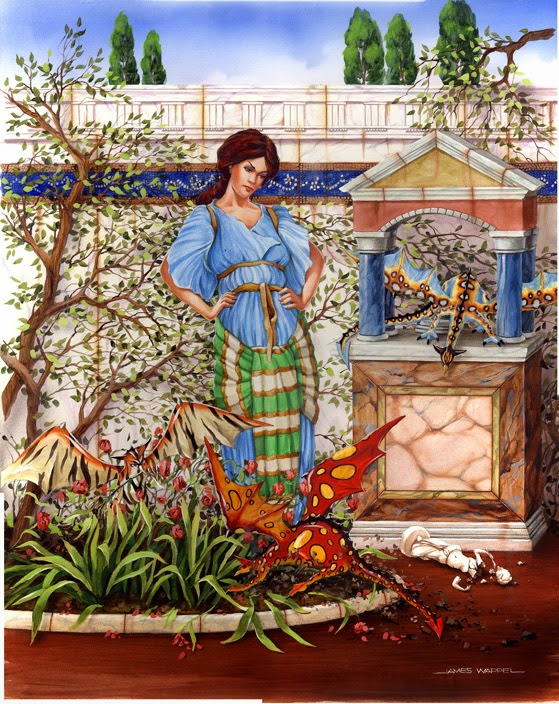 Then we have Pool Side Fun, where I had a blast with the reflections in the water.  You will notice that the same dragons keep popping up over and over... 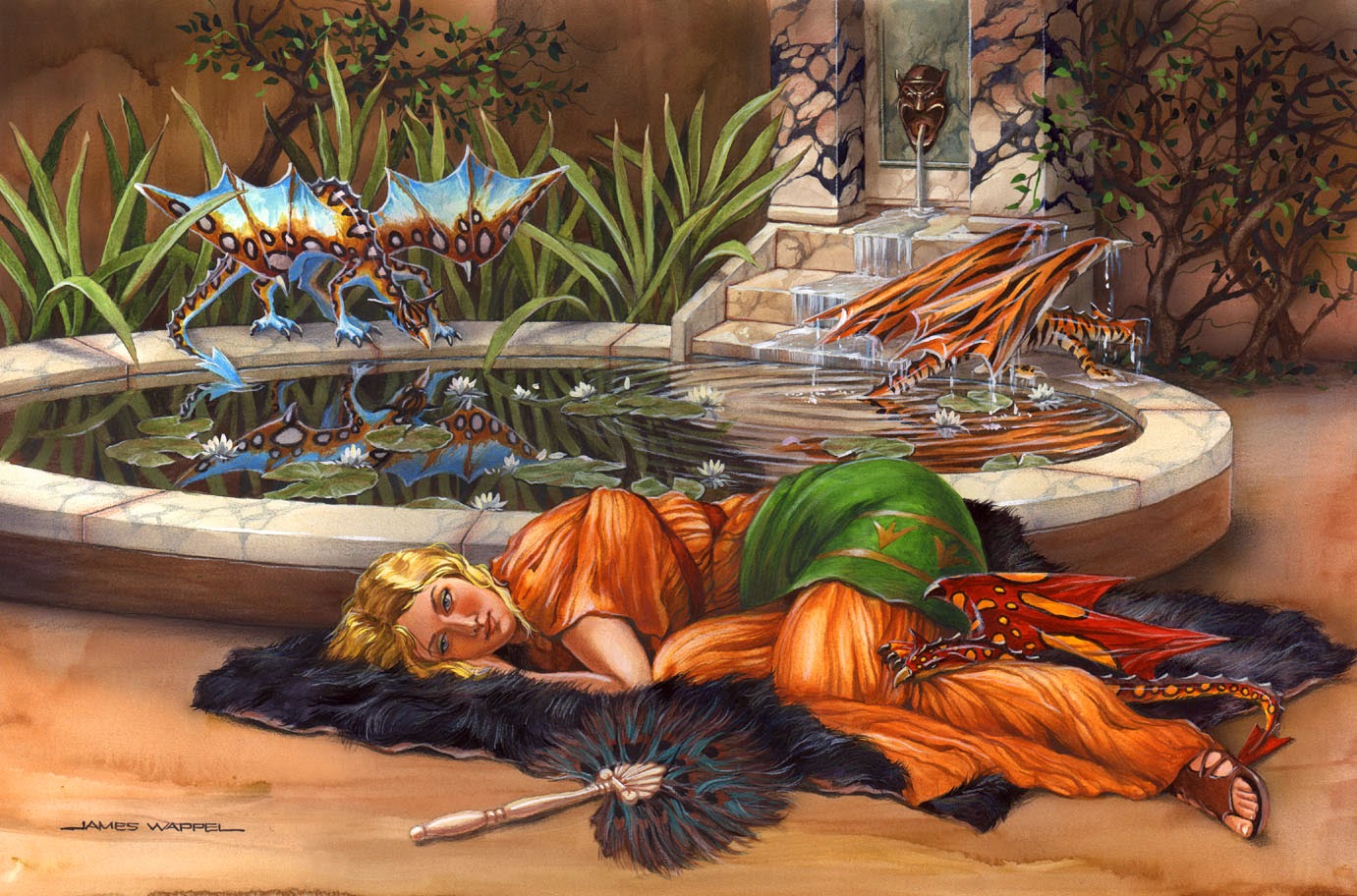 Next up is The Favorite, which was the first in the series.  It is where I first got hooked on painting marble! 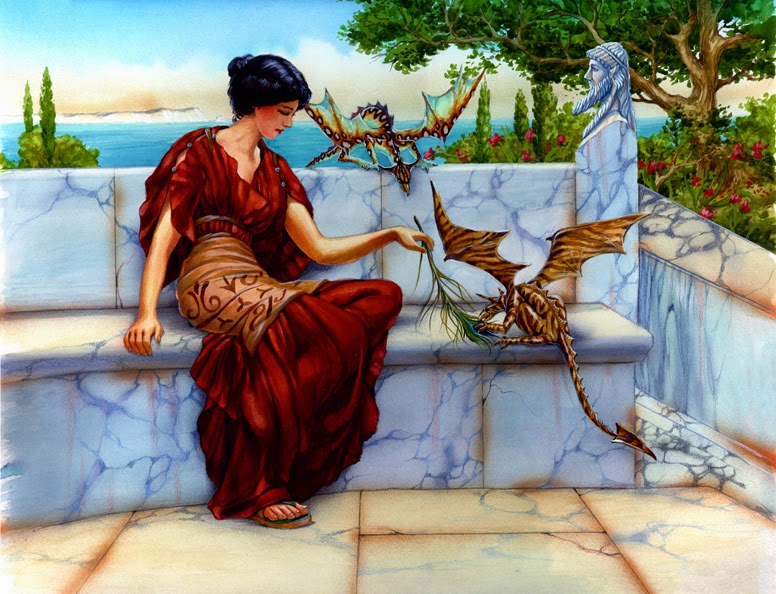 The New Toy.  I really enjoyed playing the various colors of marble off the different fabrics. 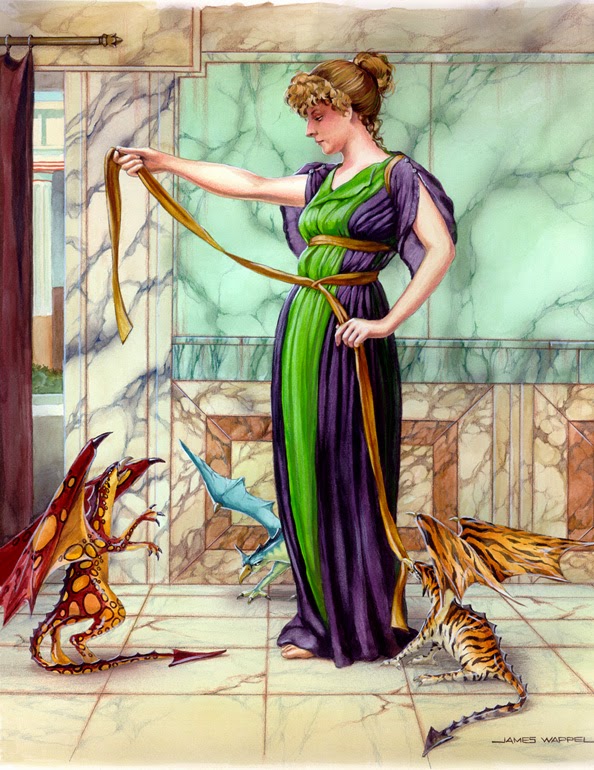 This was the final painting in the series, called Fairy Symphony. All of these were watercolors on hot press watercolor board. 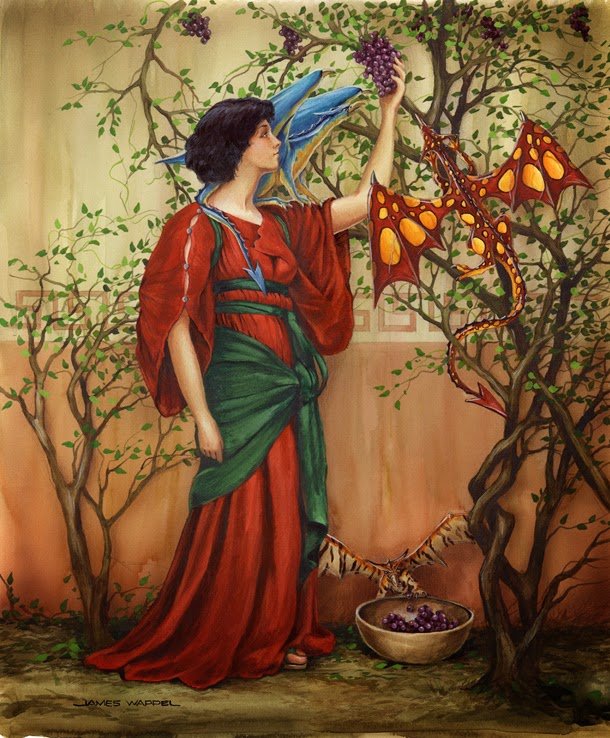 Posted by wappellious at 1:27 AM 2 comments: