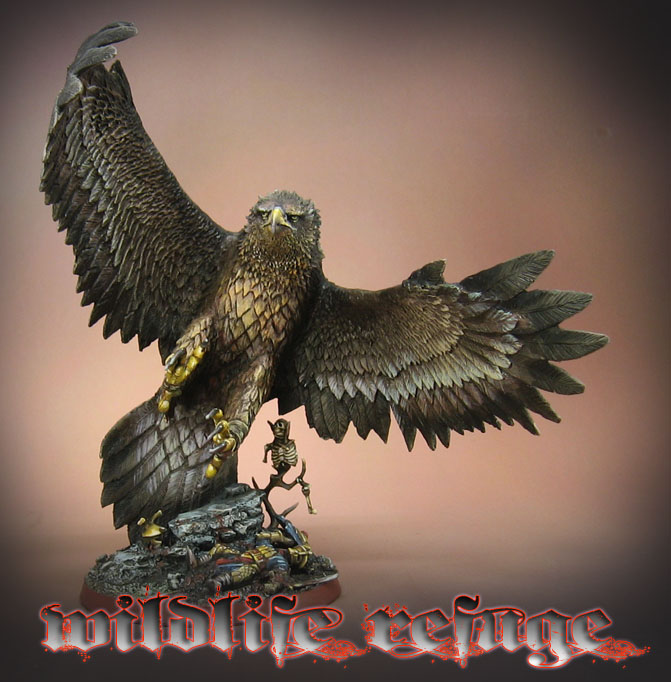 This Great Eagle was the centerpiece of my LOTR Galdhrim army.  The figure itself is no longer in print, but it was the perfect pose to represent a giant beast taking off after dispatching his prey! 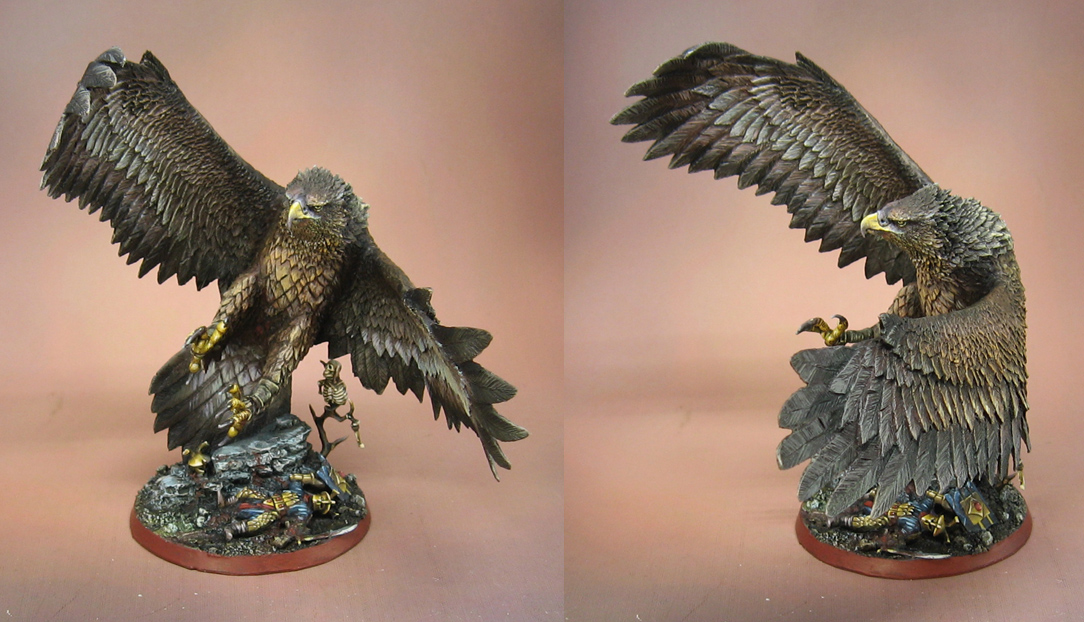 I had a lot of fun painting the wings and the face.  There are a few other similar creatures that I painted as the subject for my Painting Pyramid tutorial videos, including the Griffon and Giant Owl.  Those are each 105 minutes long, and demonstrate how to paint these large monsters in a more efficient way. 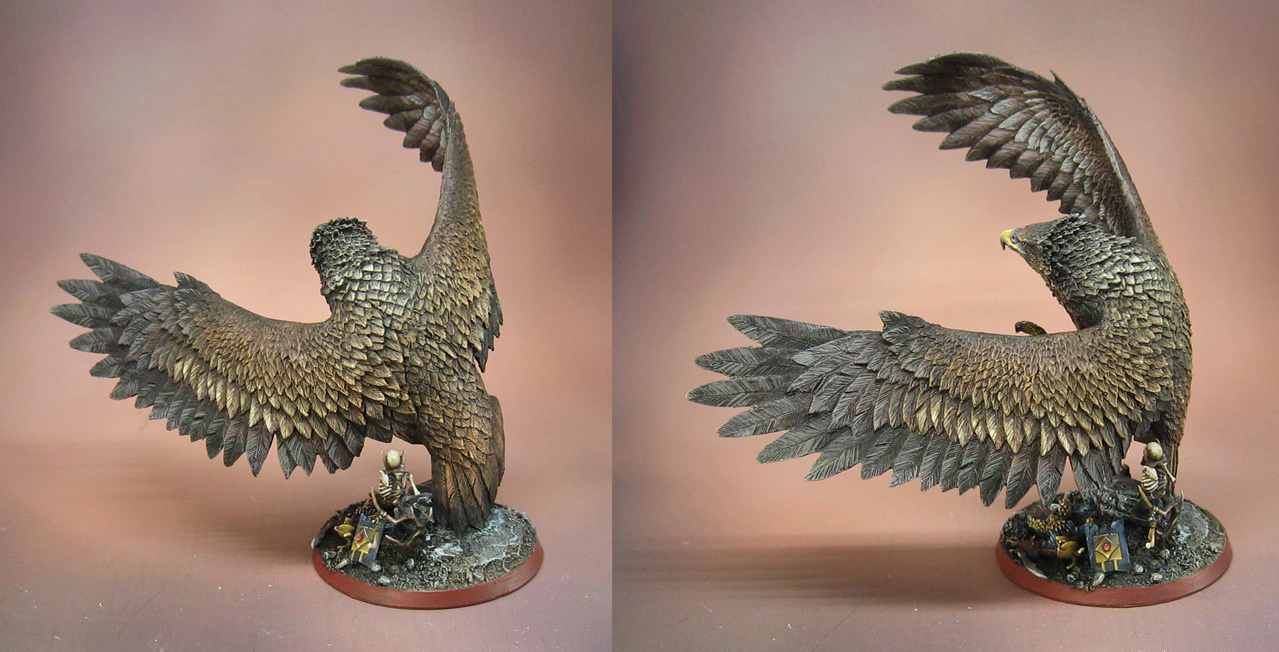 When you have large wings such as these, it is important to get some variations in those brownish tones.  You can see that some are more saturated that other, while greyish browns compliment those brighter tones.  Some sections have more yellows, and other parts have some greenish shades.

While having lights and darks can be important, keeping these very broad surfaces interesting takes more than one kind of contrast! 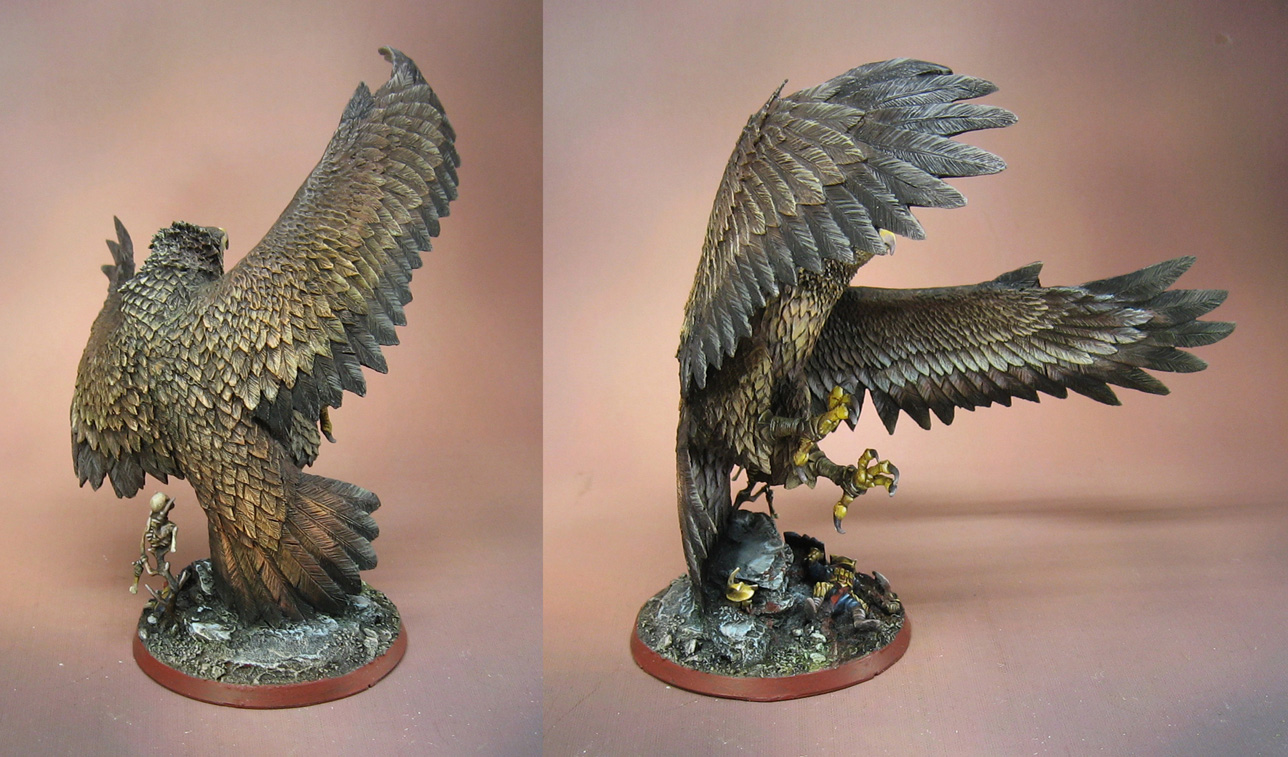 I especially enjoyed painting the face, as it was very nicely sculpted.  After painting many birds of prey in 2D art, I was very familiar with how to approach that part. 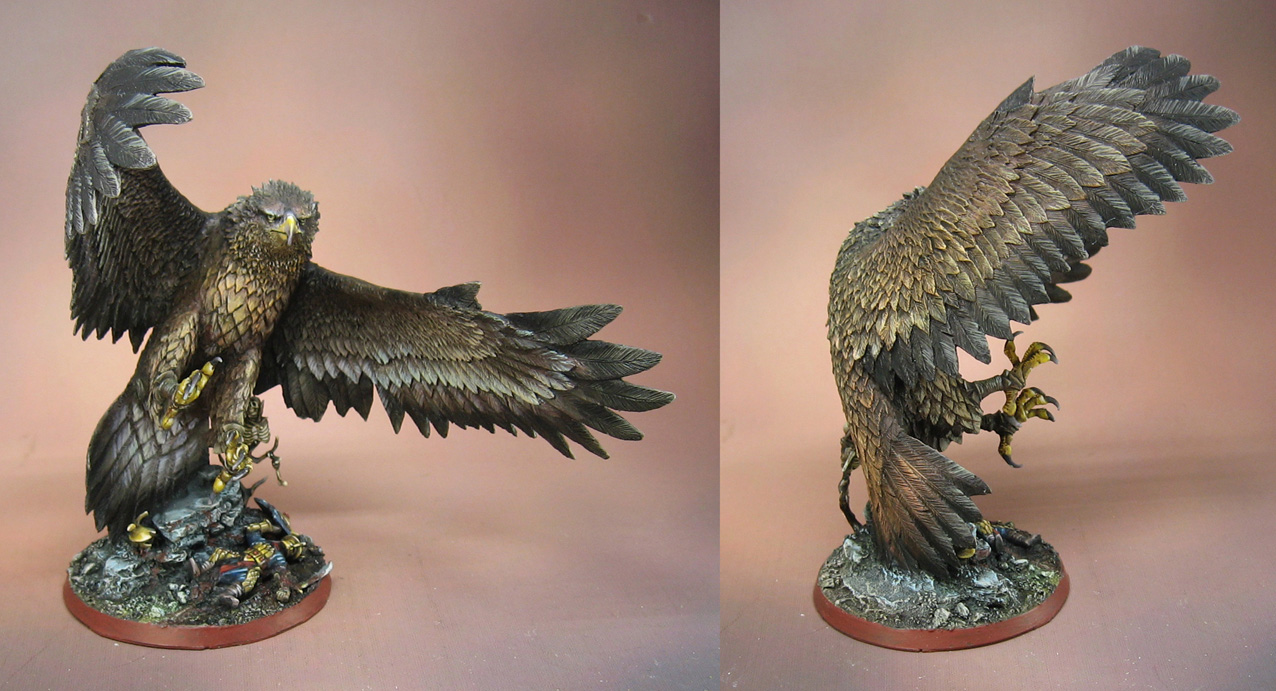 The base was particularly important.  Given the position of the talons, I really wanted to have some dead Easterlings as fresh kills.  If you saw some of my previous Lord of the Rings posts, you know that I had a large Easterling/Khandish alliance army.

For the Bilbo's Bash tournament, I had to have one "good" and one "evil" army.  They had to show in some way that they were fighting each other, so the Khandish chariots had trophy heads, while the Gwaihir figure had it's Easterling victims! 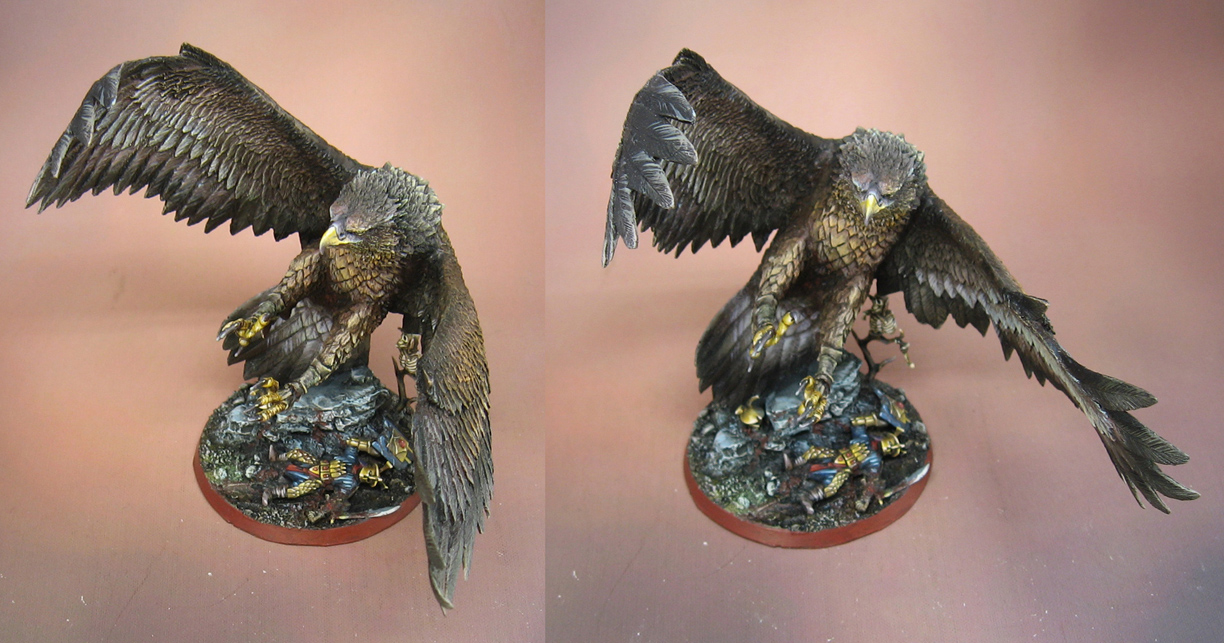 A few plastic Easterling figures were cut in a few spots and repositioned.  I have a number of blog posts from that tournament, so you can check those out in the Bilbo's Bash section and see how they were used.  Given the unique way combat is resolved in LOTR, this kind of unit was a great compliment to the Cavalry and to the Stormcaller casters.

The general idea was to use the spell to knock down the enemy, which would be charged by the infantry from the front.  At the same time, the very fast cavalry would strike from the sides, and the Great Eagle would fly over the mass and pounce from behind.  It proved to be very deadly!! 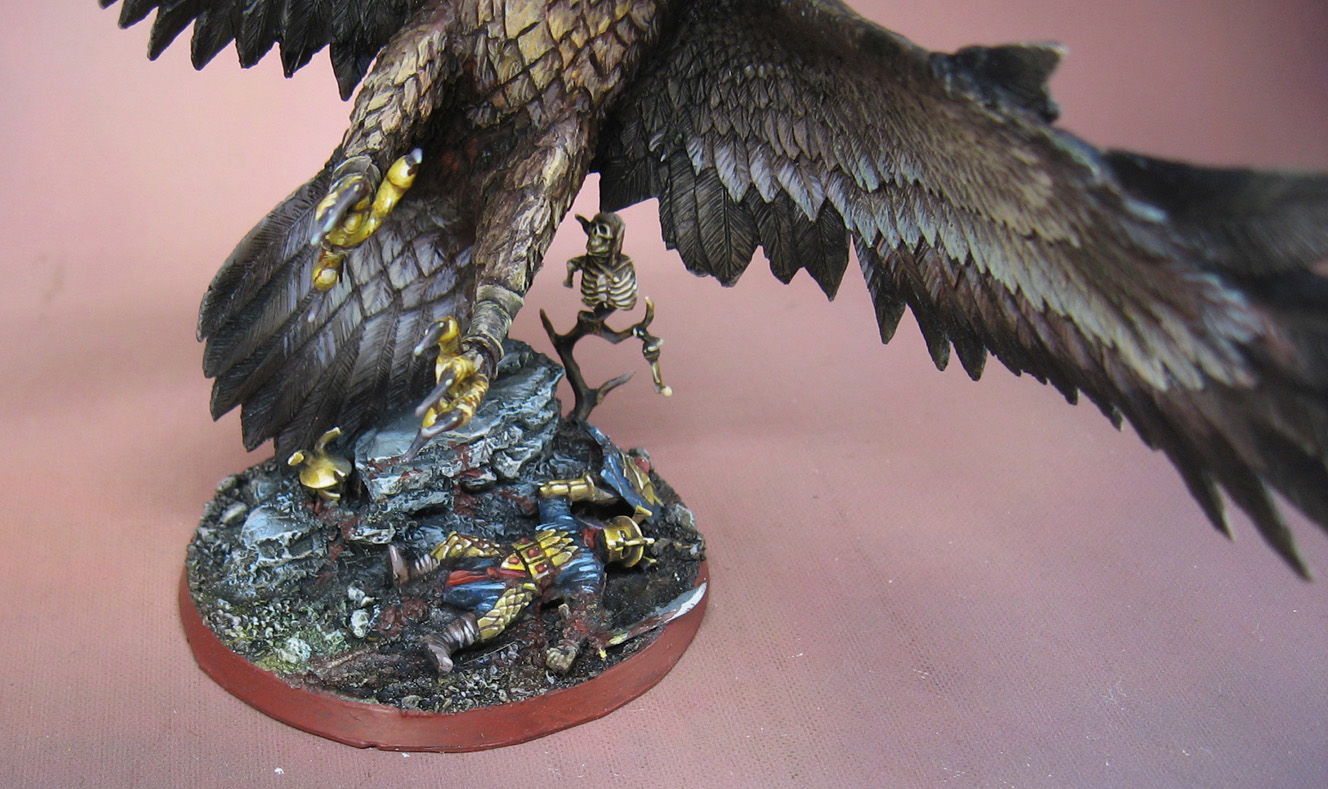 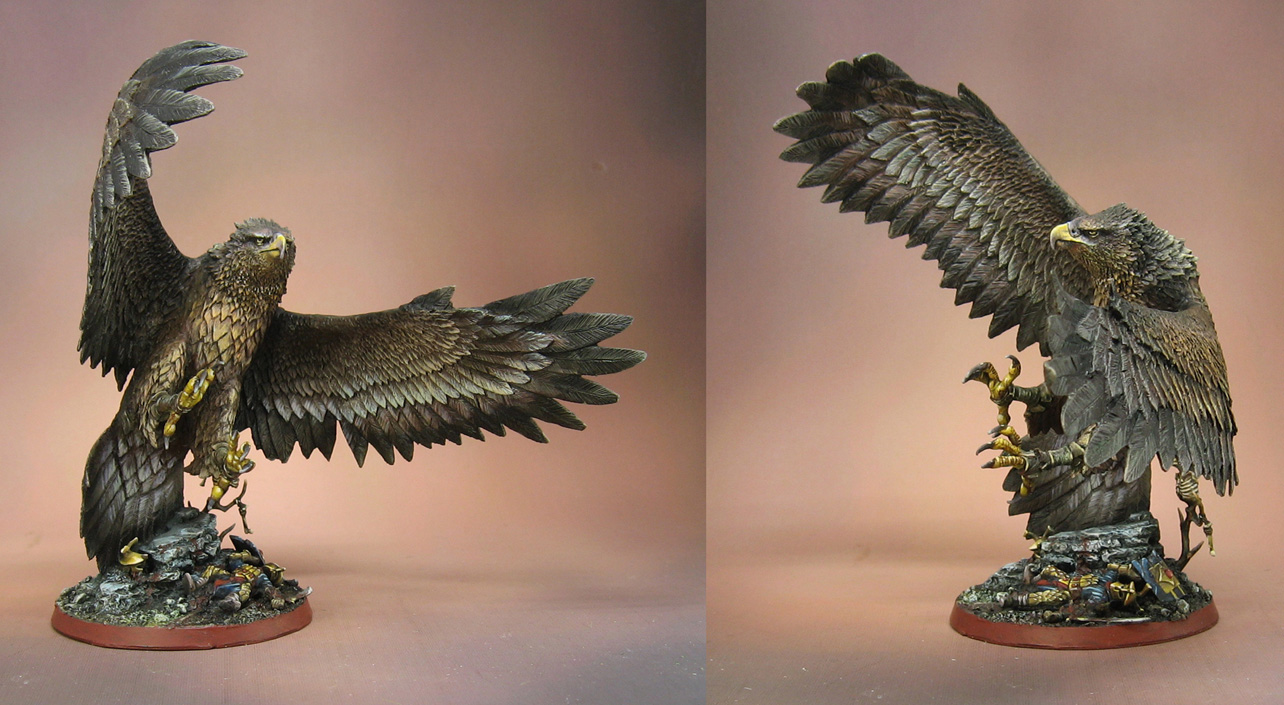 Posted by wappellious at 3:04 PM 4 comments: