The Dead Shall Rise... courage under fire 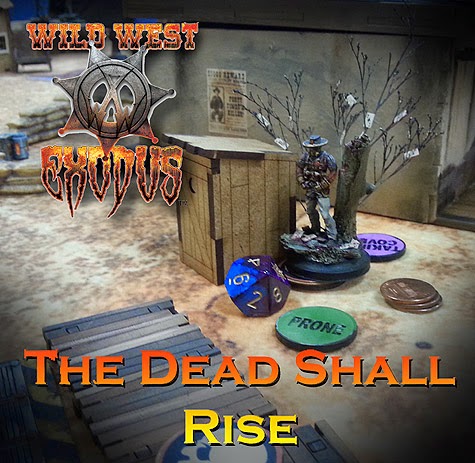 The ferocious battle over the body of the slain Outlaw Billy the Kid rages on.

When we last looked in on this titanic struggle, the Preacher and his wife lay dead at the mechanical hands of the dreaded LawBot.

The citizens of Wappelville knew that nothing would stop the Lawmen from training their weapons on their own homes and shops next!

This used to be the General Store... 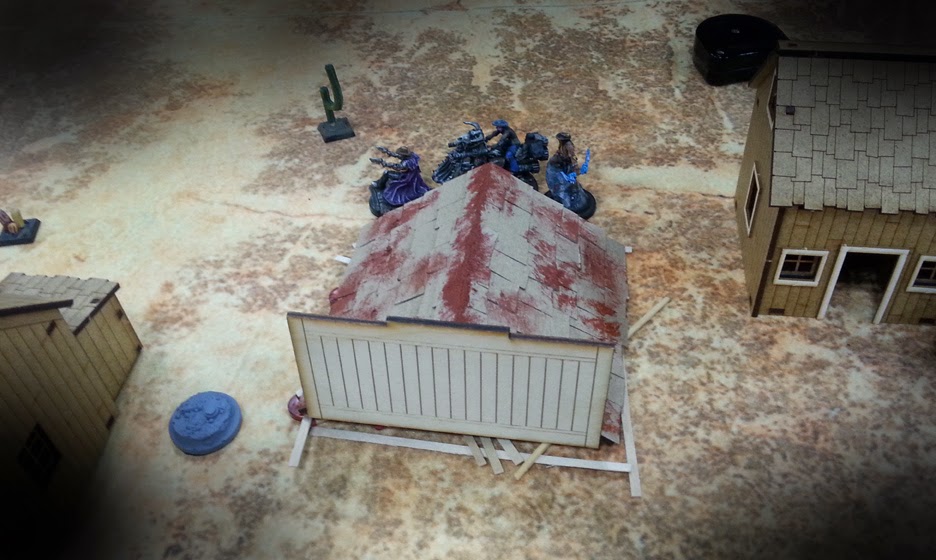 Looks like the Department of Streets and Sanitation are gonna need a new ride! 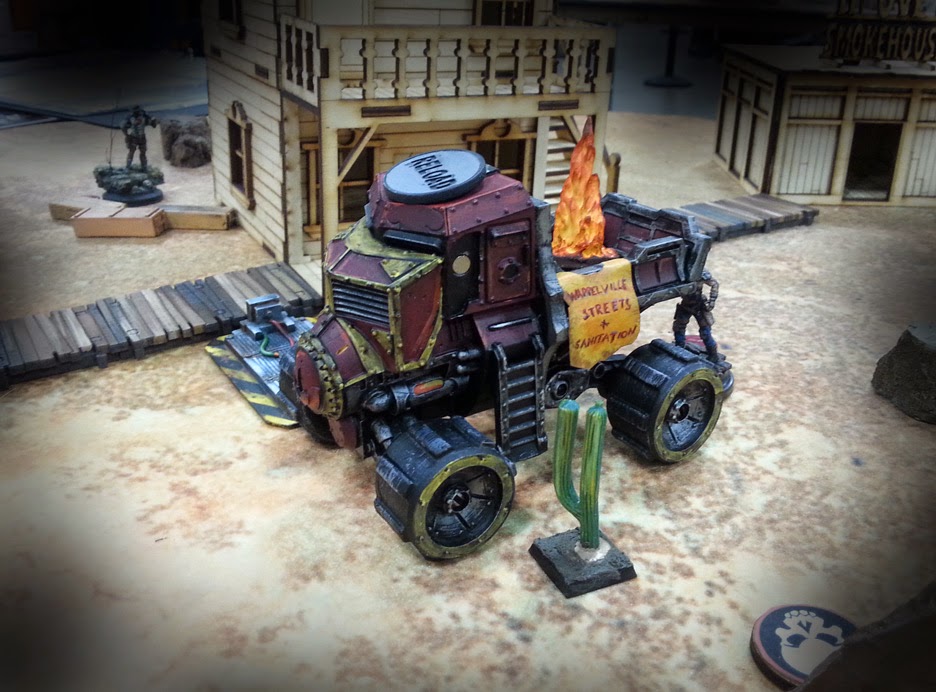 Despite the early casualties, Jesse pushed his gang forward, to the very steps of the church.  They advanced through intense rifle fire from the Lawmen ensconced inside and outside of the church.

In fact, one of their number was able to stand right in front of the steps and blast away with his shotgun!  A few blasts from the powerhouse weapon and Pat Garrett himself fell.  This could be a dark day indeed! 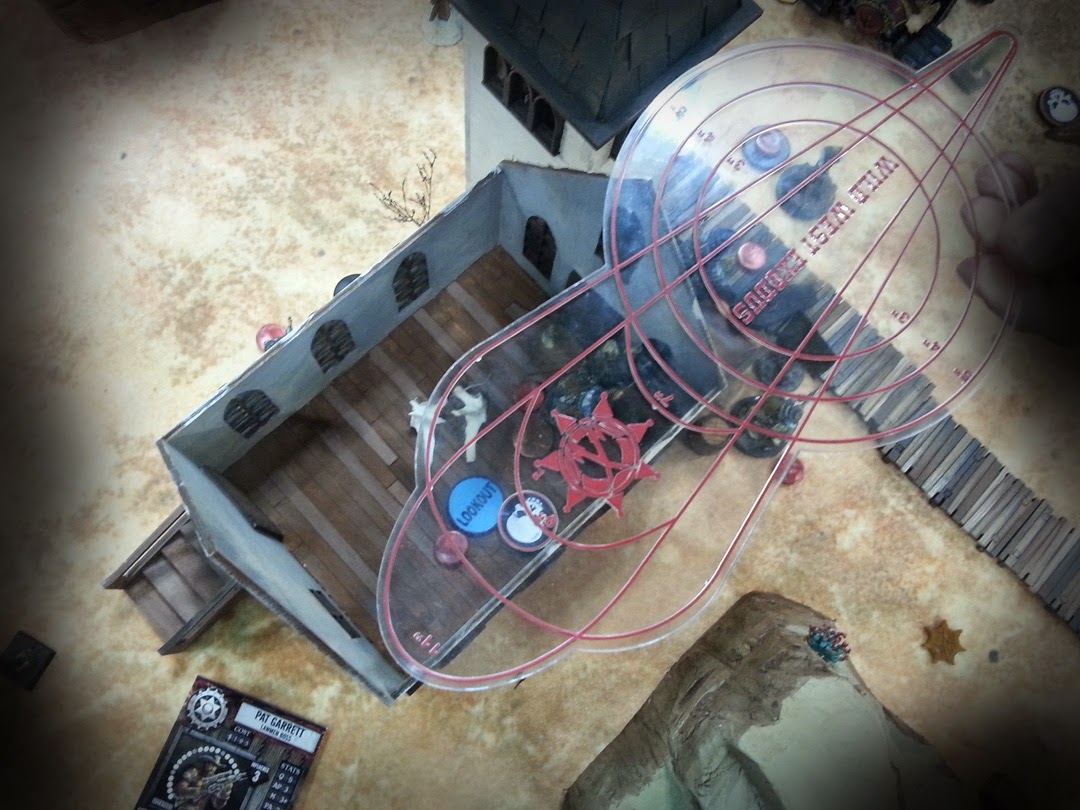 To this day, the Lawmen swear that the bullets seems to pass around the shotgun toting Outlaw, which had been fired from point blank range.

They blame the robed stranger, who made odd motions with his hands as they took aim... 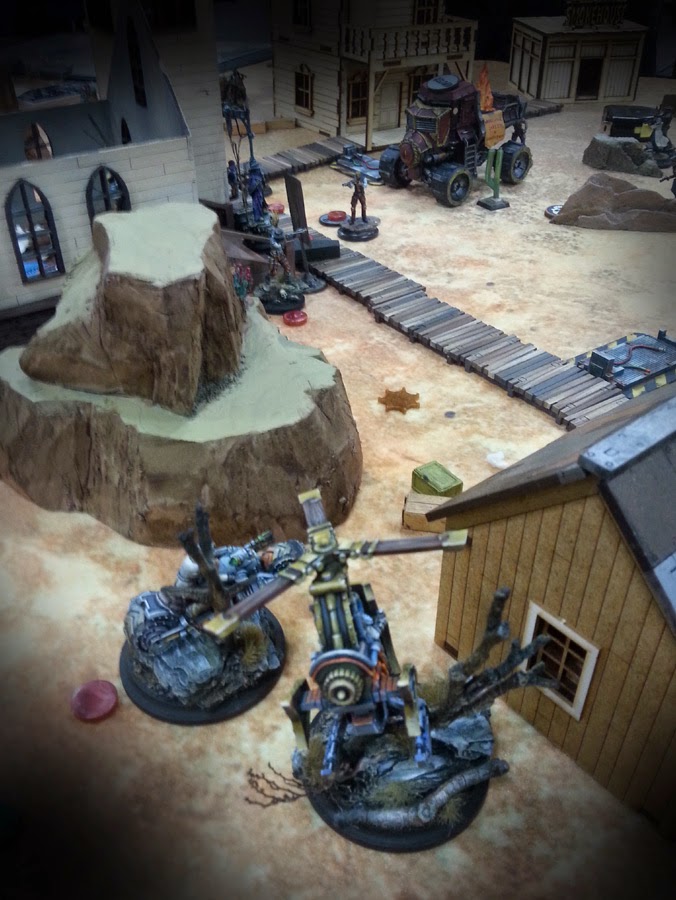 With their leader dead, the Lawmen were briefly stunned.  They had to fall back on their intensive training to hold themselves together, despite the deadly onslaught from all directions! 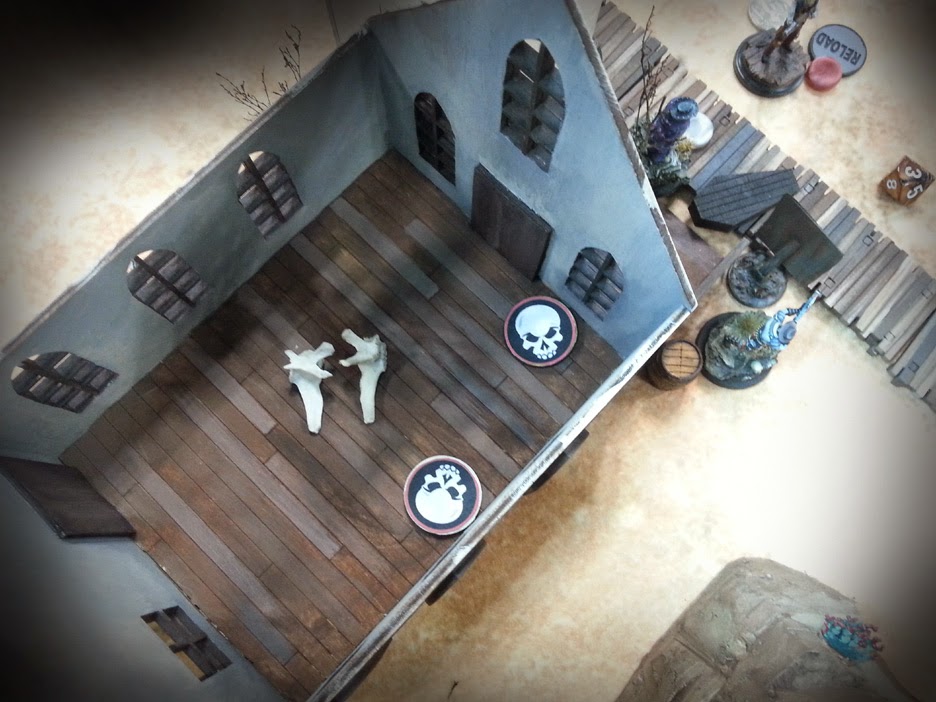 Cole and Jesse found the remains of the General Store to their liking, and they used their deadly accurate marksmanship skills to wipe away one heavy Lawman unit after another. 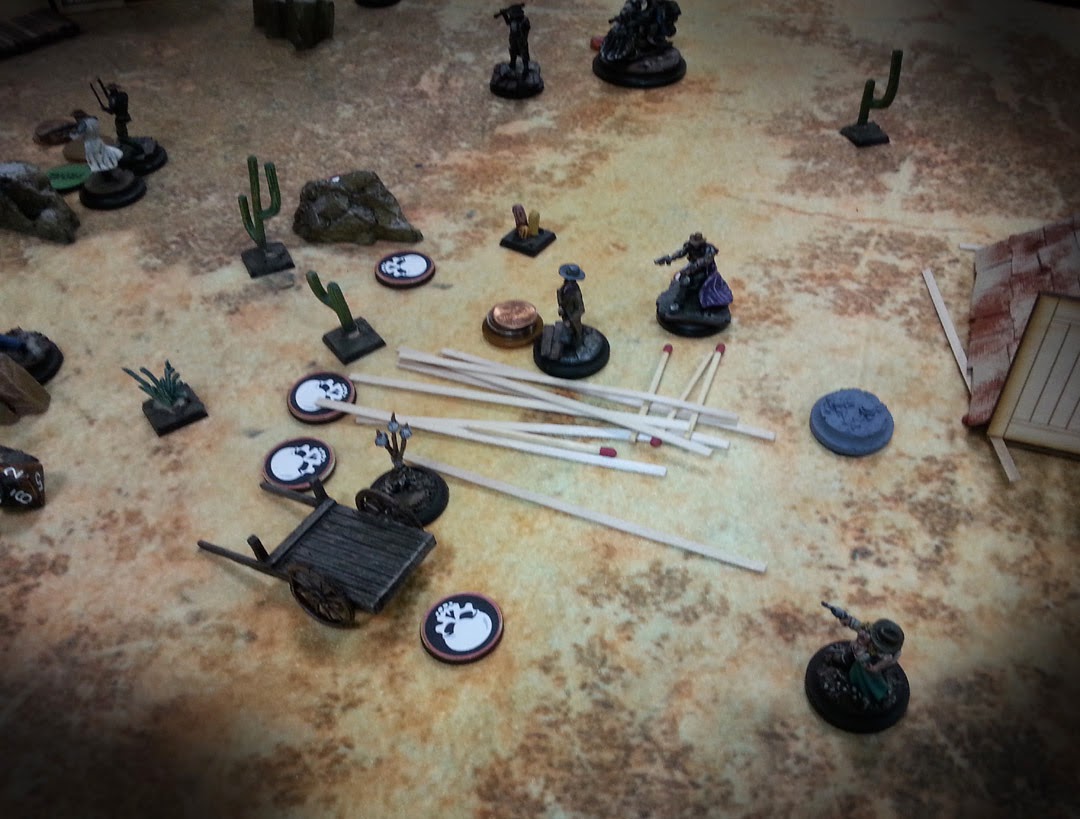 Things began to look even more bleak for the Lawmen as Apache kid was able to put one arrow after another into Doc Holliday, despite the cover he sought behind the outhouse. 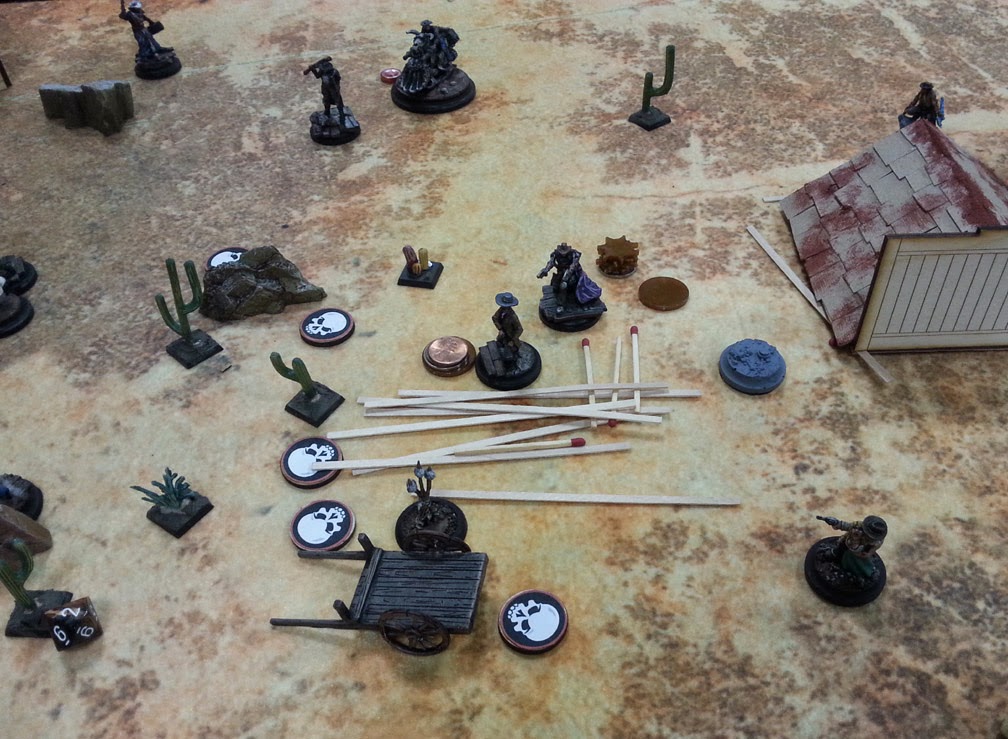 One of the Outlaws attempted to pick up Billy's casket, but was interrupted by one of the rifle hired hands.  In a nasty hand to hand fight, the Outlaw won. 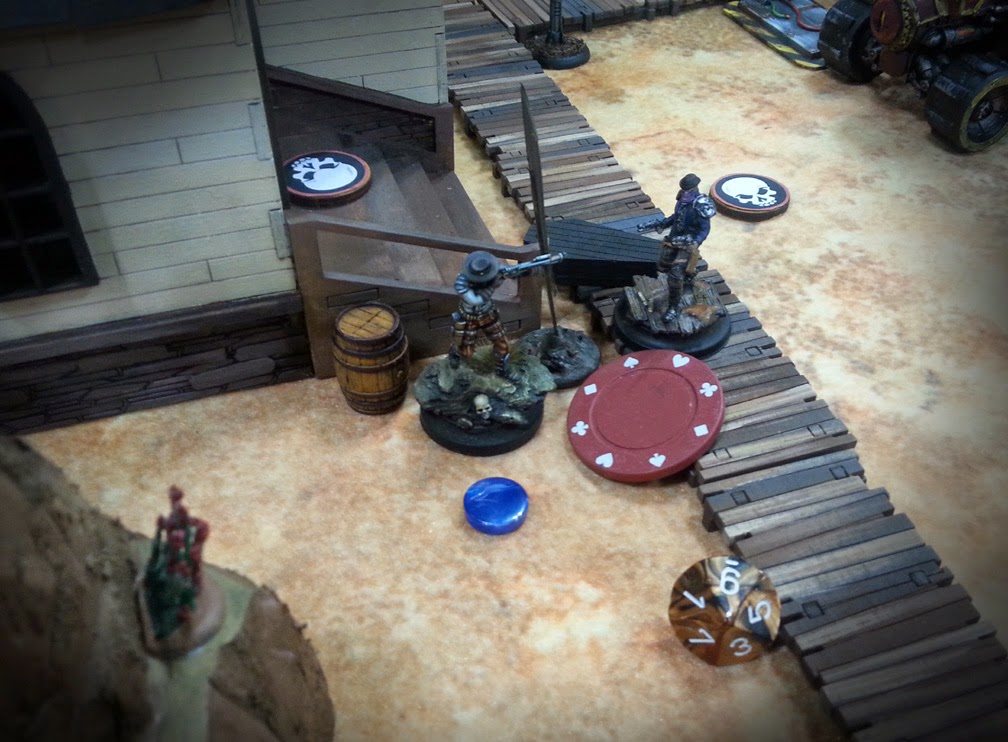 His victory was short lived, however, as he was taken down by the gyrocopter. 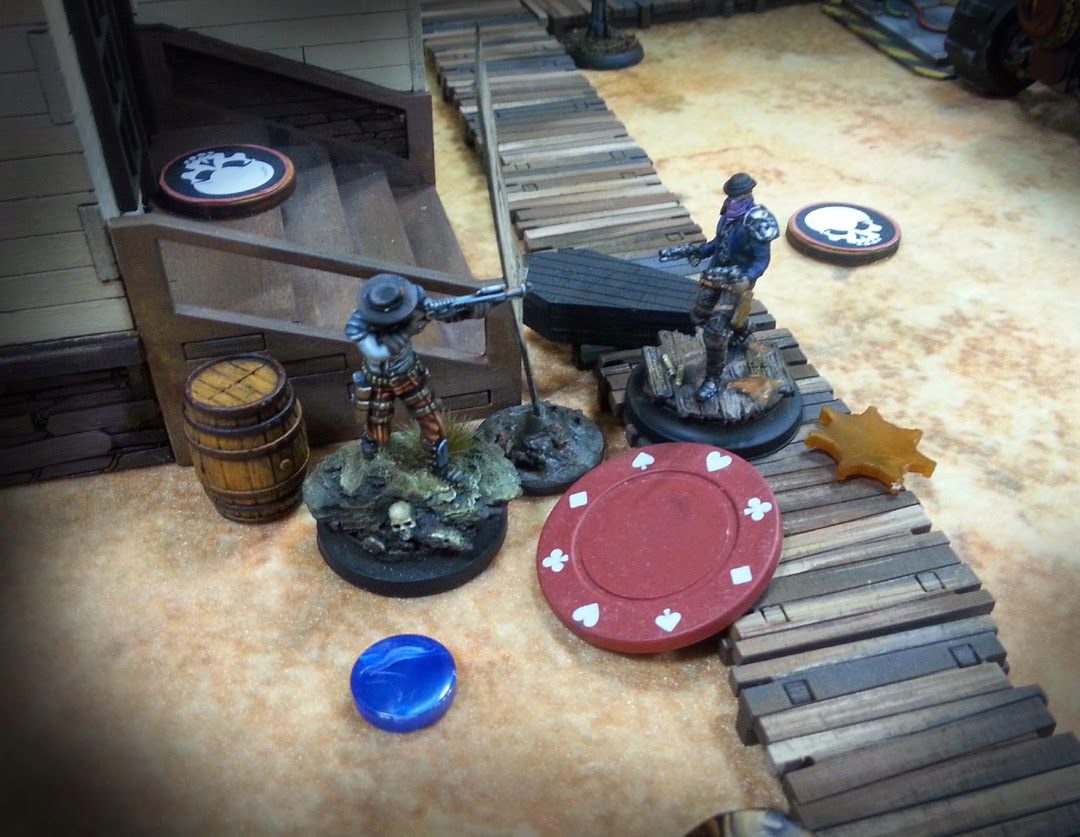 Still pinned down by the sniper in the church steeple, Long Tree continued to touch himself... obviously in a way that suited him.  He would gain +4 lifeblood during these later turns. 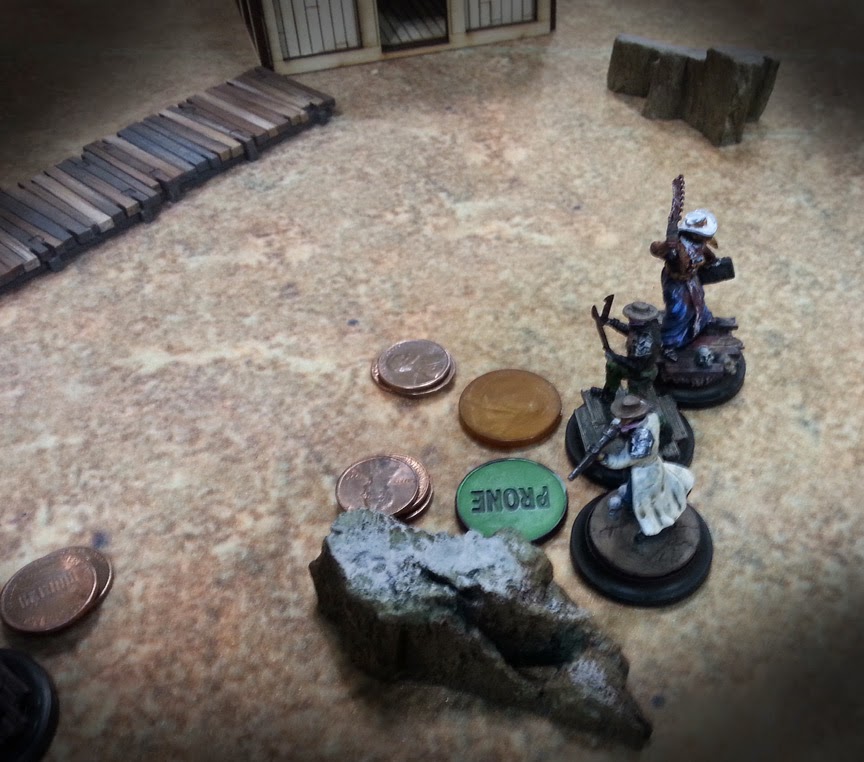 While the Ironhide vehicle had taken a lot of damage, it was still a huge threat to take away the body of the dead Outlaw.  It must be stopped at all costs!!! 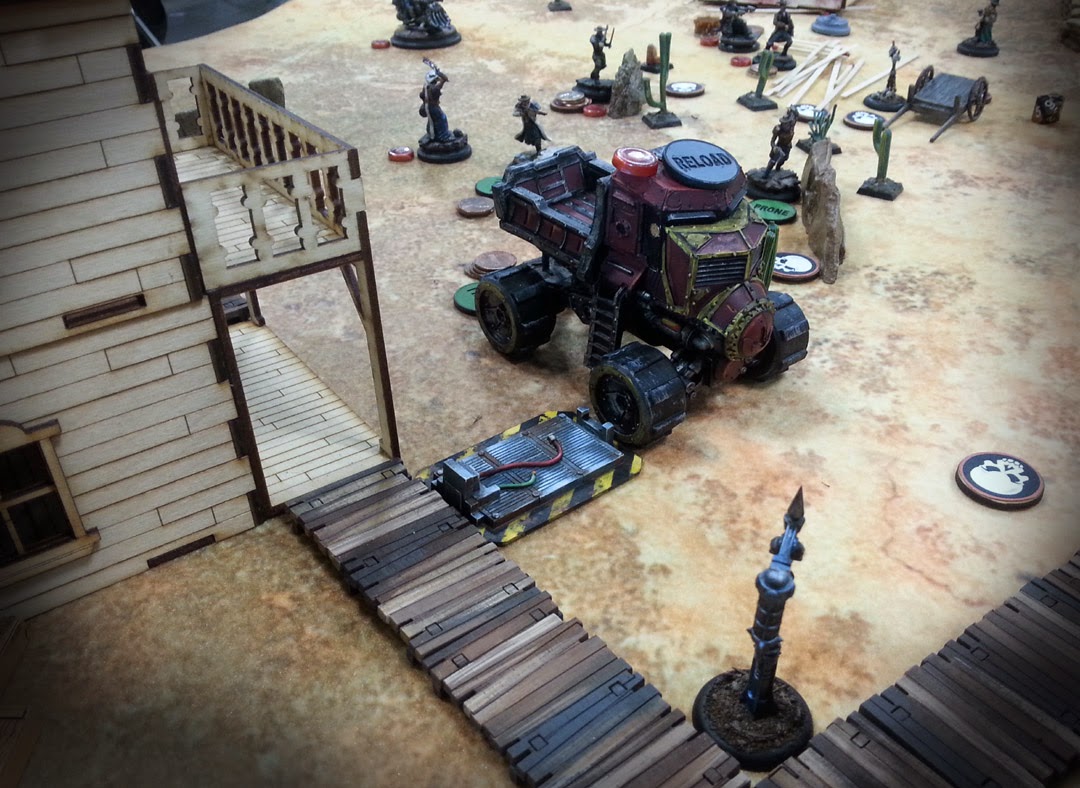 The view from above shows the carnage.  Every skull counter is a fatality.  Many more would be placed where Lawmen stood as the fight grew to even more violent conflagrations... 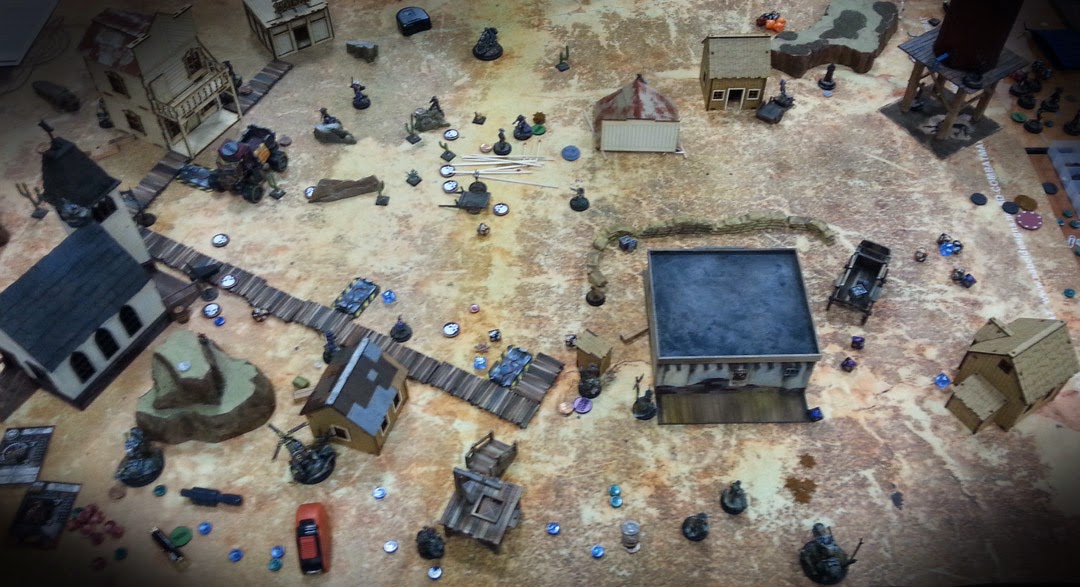 The Wraith led Long Tree and a hired hand in a stealthy advance around Miss Fannie's House of Horizontal Refreshment.  They hoped that it would go unnoticed by the Lawmen until it was too late. 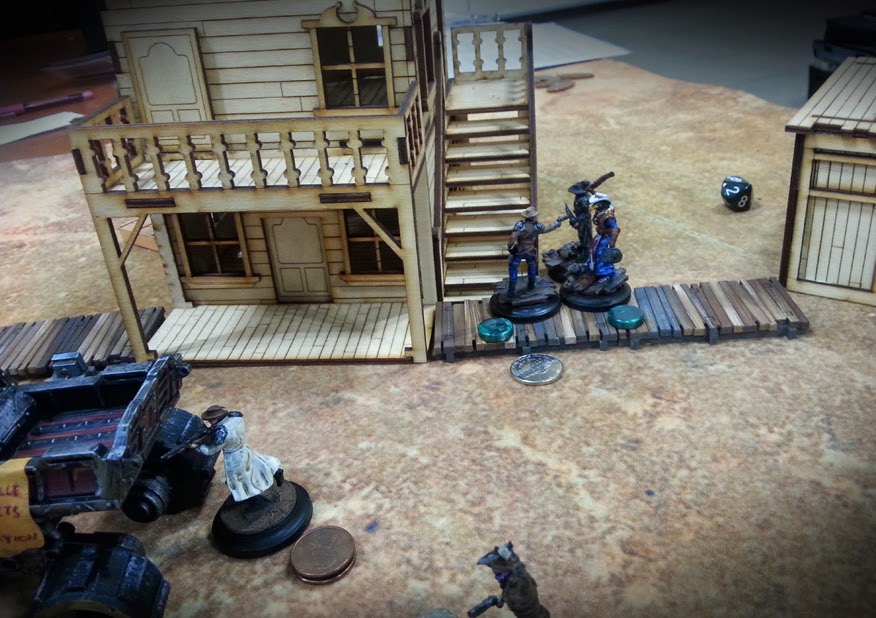 At long last, the threat of the Ironhide was eliminated, as it went up in flames.

This only added to the misery of the townsfolk, as all the manure burned with it.  Yuck! 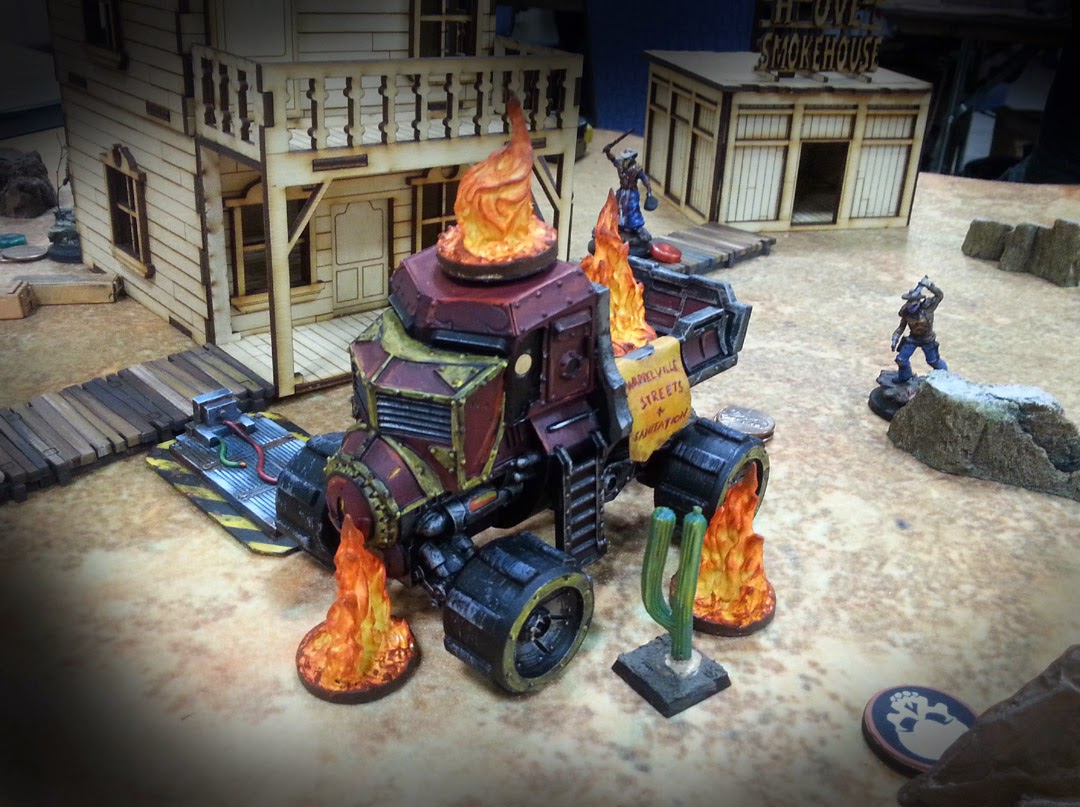 The battle starts to enter its final stages.  Lawmen begin to realize that the Outlaws are also using the chaos to steal away with containers of RJ-1027!  Obviously this is meant to be a down payment to Carpathian for "fixing" Billy. 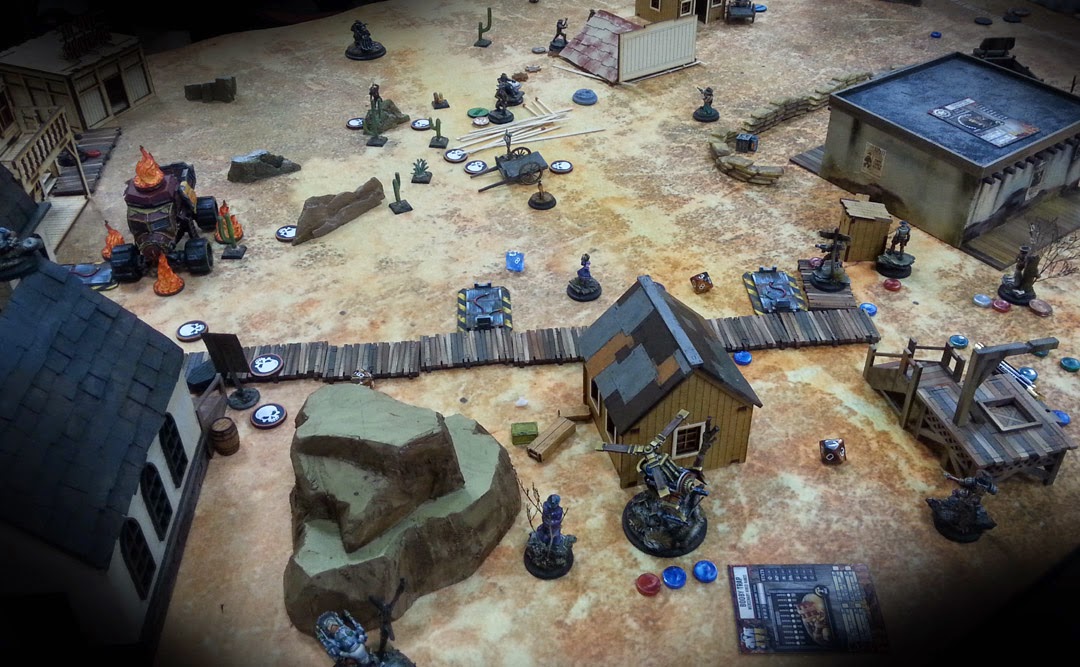 Dead Eye Danny, as he would be remembered, was implacable in his bell tower redoubt.  Not only did he slow the Outlaw advance, he also killed many of their number before he himself eventually died of his wounds. 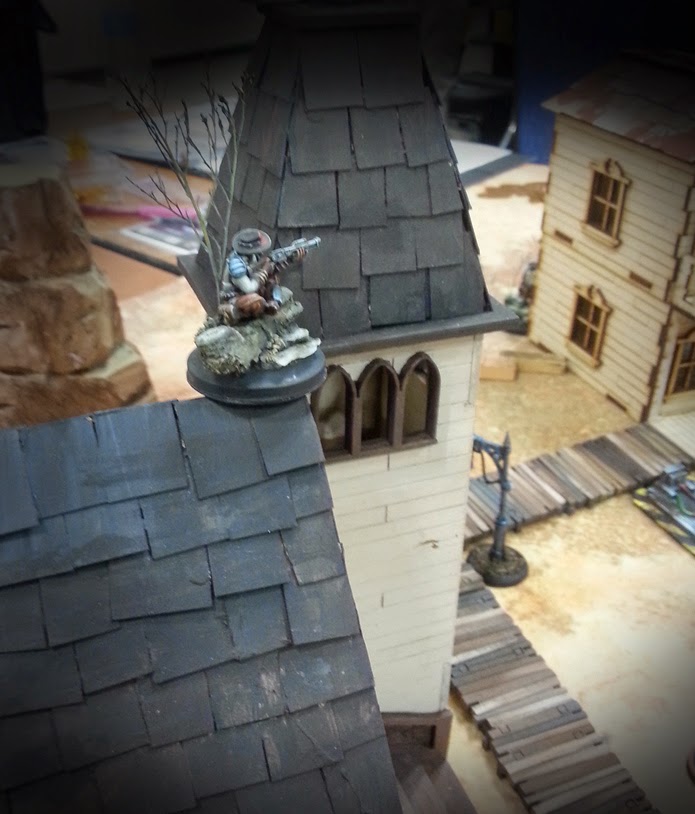 He was not the only casualty, as Nickle Back was taken down by the Wraith.  His sacrifice was not in vain, however, as he stood just long enough for an Interceptor to get into position... 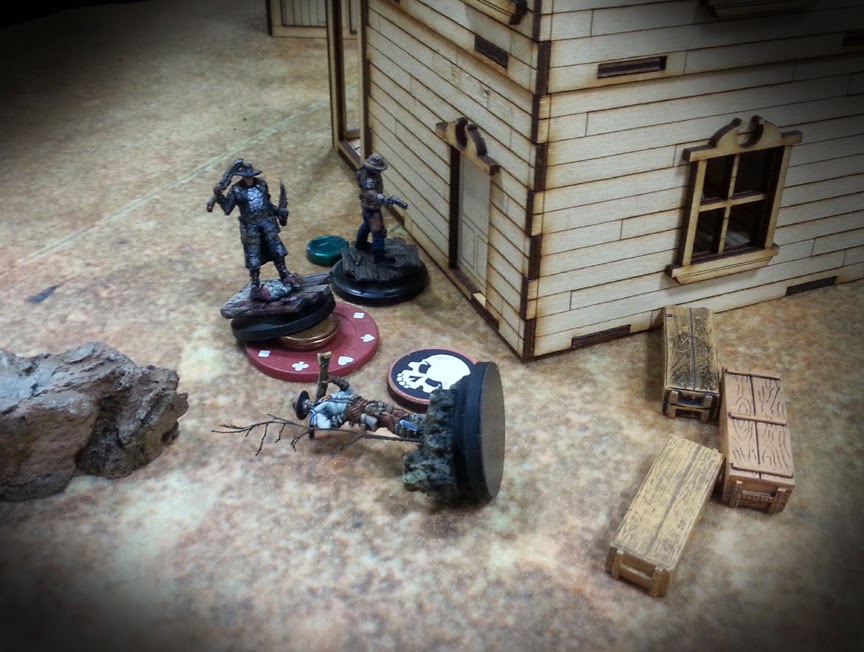 Desperation is now the order of the day for the Lawmen.  Most of their number are now dead, including their Boss, and even Deputy Berenger, slain by Jesse himself.

The despicable UR-31 LawBot had also been destroyed... a huge blow to the Lawmen. 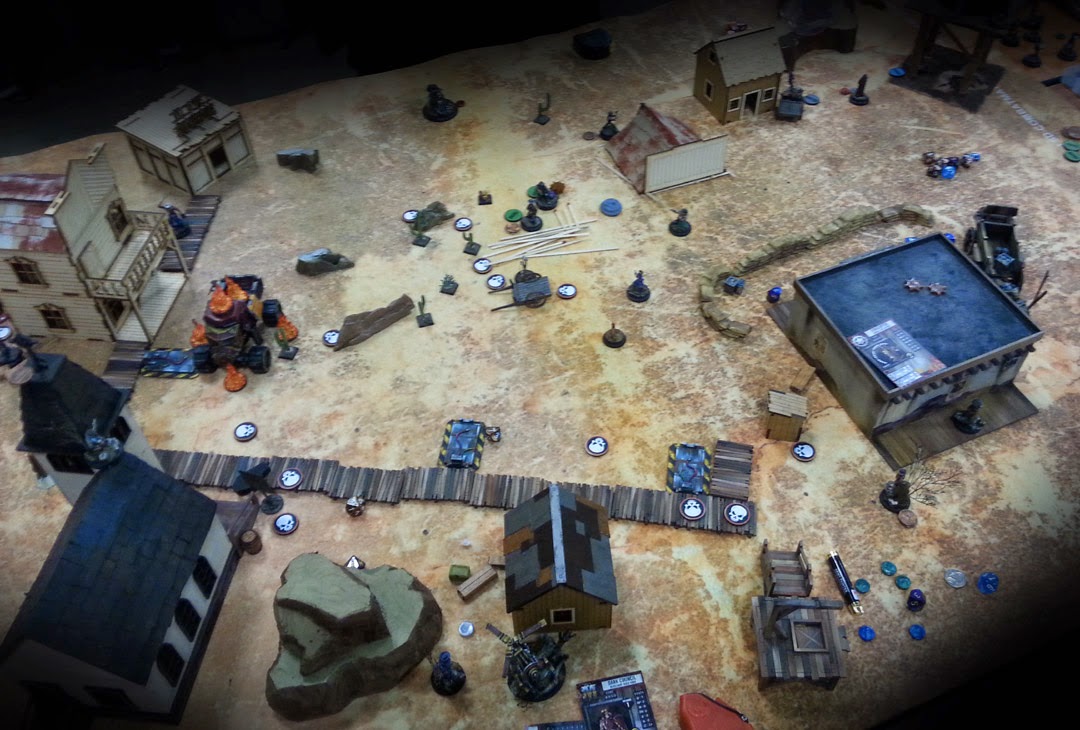 Long Tree decided to make one last fateful dash for Billy's coffin.  The hired had with him would be taken down by the Interceptor as soon as they left the burning shell of the Ironhide. 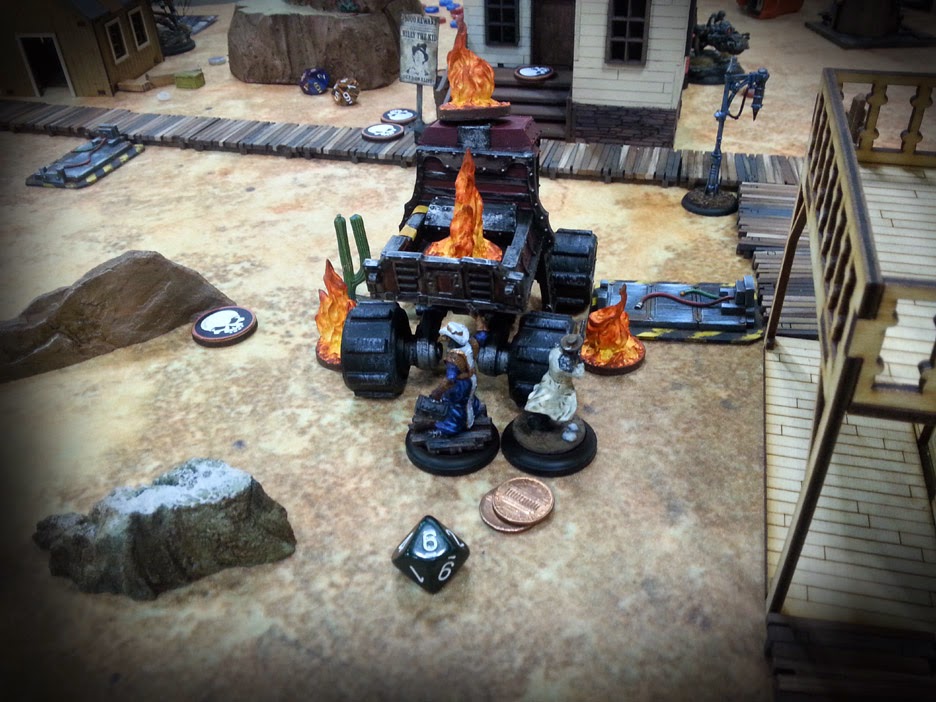 The other Interceptor, which had been guarding the RJ container, was taken down by inexplicable fire from the distant snipers.  Rumor has it that someone in a blood red robe was standing next to them, guiding their aim... 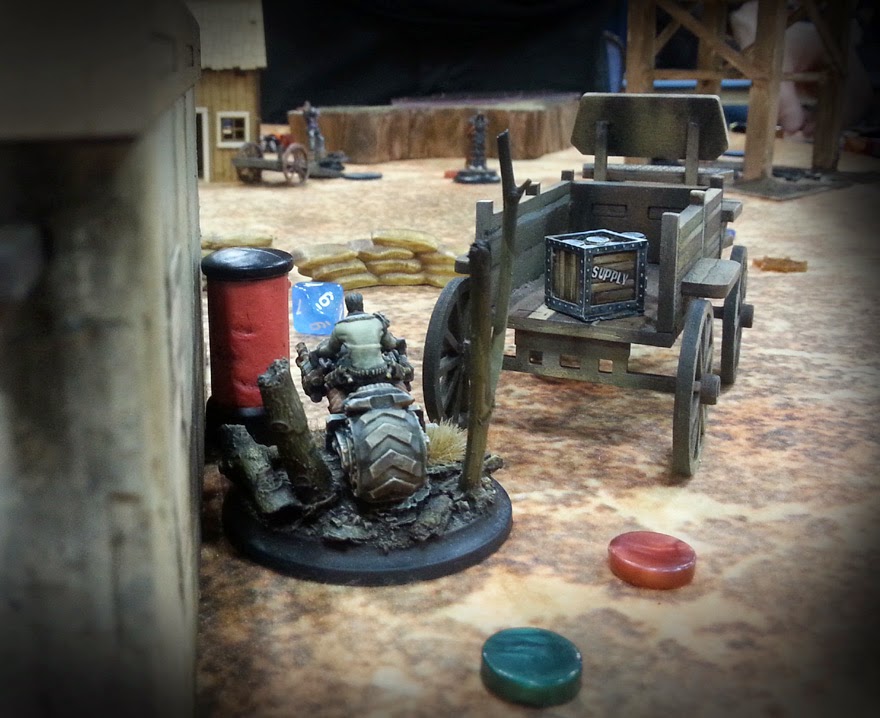 The final act of this drama plays out.  With most of the lawmen gone, they are dealt one last blow.  Doc Holliday is killed!!!

But just as all seems lost, the battered Lawmen rises to his feet... from the dead!  Could this be possible?  What strange medicine could be involved.

Buoyed by this miracle, the Lawmen pledge to fight on, even if all of them die in the process. 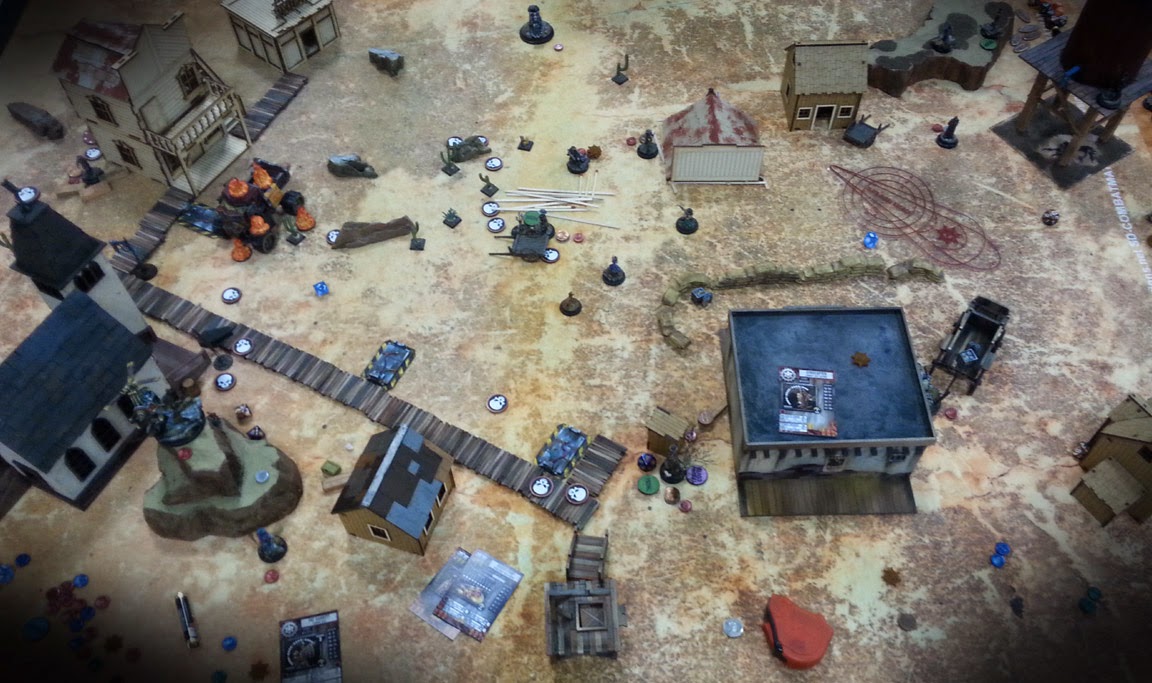 He beckons the Outlaw to "get a pair" and emerge from his hiding place.

Jesse obliges him, shouting curses and threats all along the way. 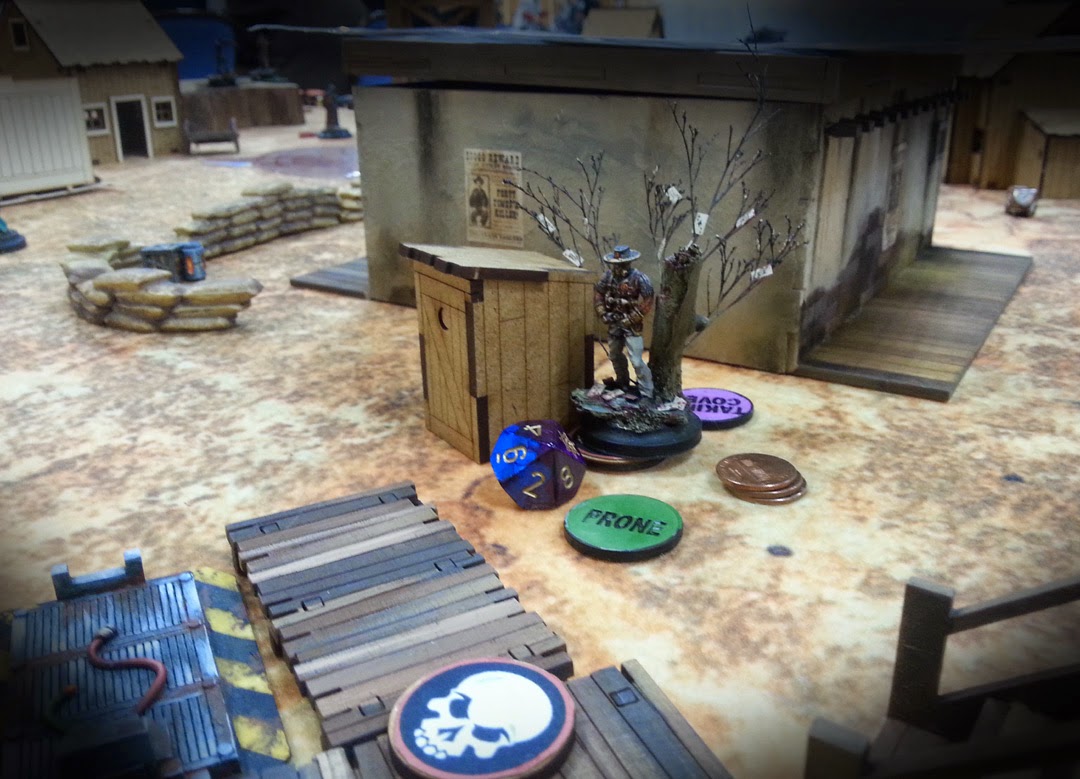 This is a clever move by Doc.  He knew that an IronHorse was waiting in the distance to drop some missiles on him.  Not only had he drawn Jesse right next to him, he had gotten the brutal Outlaw boss to stand right next to a very unstable container of red death!

Any weapons fire now would probably wipe out not only them, but the entire town.

Jesse and his remaining crew turned and walked from the town.

However, Jesse made it clear that he would be back.  As many times as it took. 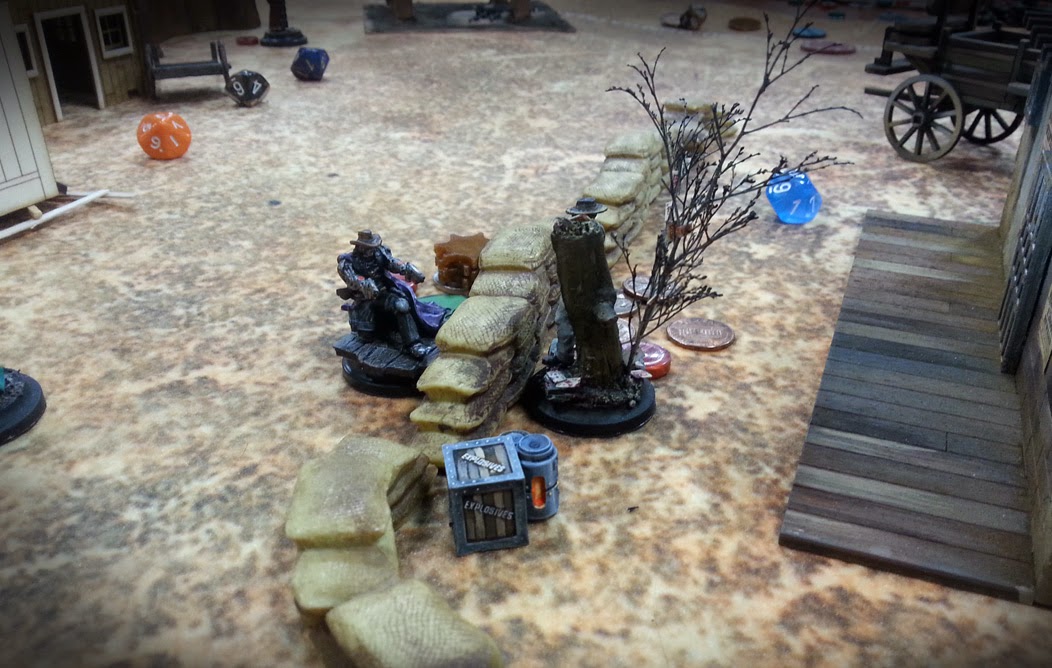 We have sisterhood too 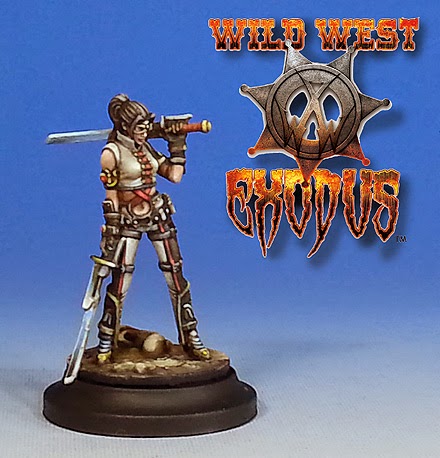 Tonight we meet one of the Yi Sisters, some new sculpts from Wild West Exodus.

Adding some girl power to the Wild West has been a goal of the kickstarter the last few weeks.

The Ladies of the West are handy with more than just shootin' irons!