A fun little centaur from Chainmail 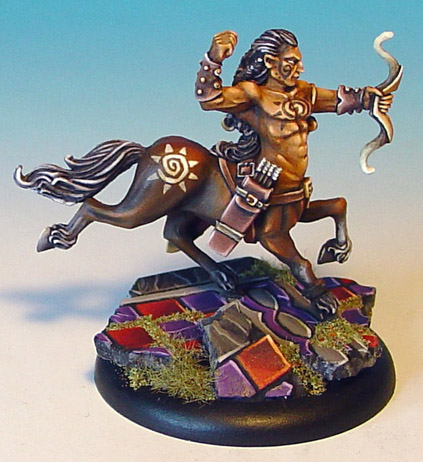 I discovered this guy the other day.  It's another one of those rare Chainmail miniatures.

What I enjoyed about this one is the sculpted transition from the torso to the horse body.  It was done relatively well, and that let me do some interesting things with the fleshtones.

Normally, there is some kind of belt or armor that completely slices the two apart from each other.  Here, even the hair blended nicely into the horse body.  It's a pretty dynamic pose for a centaur as well.

I don't get to do brown flesh tones very often at all, so this was very cool!

Posted by wappellious at 6:15 PM 2 comments: 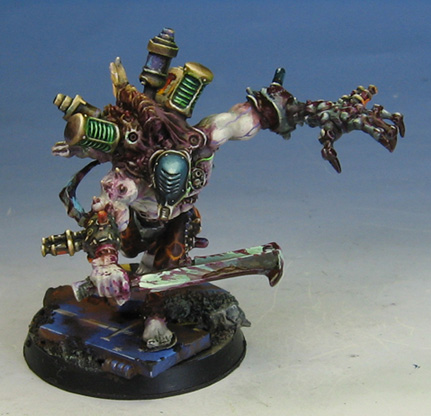 OK!  The images of the last Grotesque for you.

As usual, when I get a method down pat for painting a particular kind of new miniature, it is at its peak on the last figure!  It would have been handy to know what I know now back when I painted the first one, but that's not quite how it goes. ;-)

In addition, this figure probably had the fewest F-Cast issues, which helped a lot!

As I mentioned in the previous post, I tried out a new material on this figure.  I was very pleased with the results.  There is one last figure related to this group, and that is the Haemunculous baby-sitter.  I will be using some of these techniques on that figure as well.

These top views give you a better look at the close combat weapons, as well as how the figure relates to the base...

I have some pictures of the squad coming as well, so stay tuned!

Posted by wappellious at 3:44 AM 6 comments: 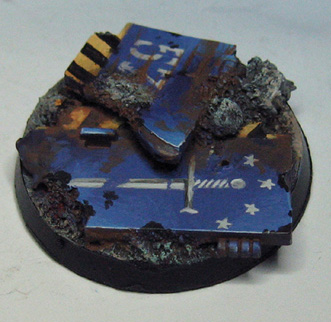 As I work my way through this Grotesque squad, I have been conducting all kinds of experiments in painting various blood effects.  It has evolved with each miniature.

This current experiment involved a new gloss medium I had not tried before.  It was from Coat D'Arms.  I had won a set of Coat D'Arms years ago at Adepticon as prize support.

I was starting to run low on 'Ardcoat, so I wanted to see what I could do with this material.  Since I had the other Grotesques as a control comparison, I thought this would be a great time to experiment!

I used the same Vallejo Transparent red and Reaper blue liner color combo as I did on the previous Grotesque figure, but this time I added in the CDA gloss medium. 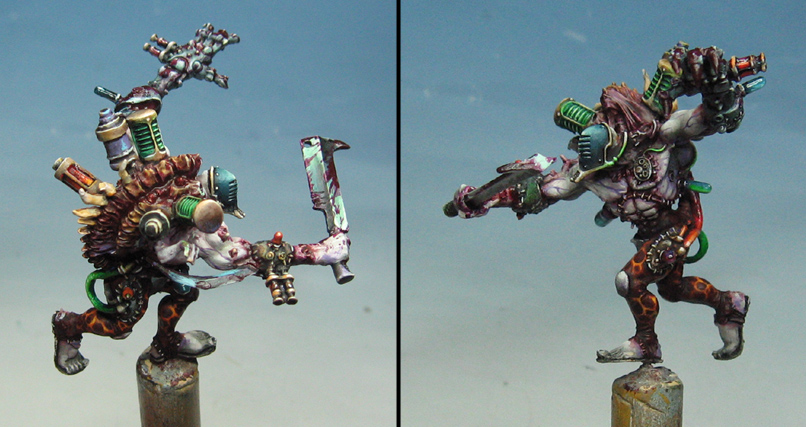 I was not sure what to expect.  It was much thinner than the 'Ardcoat.  However, it really worked well, and let me do some amazing things.  I didn't have to thin it down to do most of the blood effects, as I usually have to do with the 'Ardcoat.

I found that it was possible to get it thick enough to give that 'body' to the gore on the blade and claw, so it was a very good addition to the repertoire!

My next experiment to be using regular Liquitex Acrylic gloss medium to see if I can create some extra thick effects, such as blood dripping from a blade, etc. 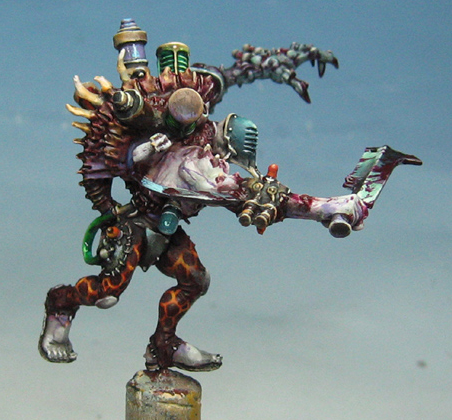 Here's a close up of the base for this final Grotesque.  Tomorrow I will post images of the finished mini, and some group shots, among other things!