A look back in time to see what life was like before minis! 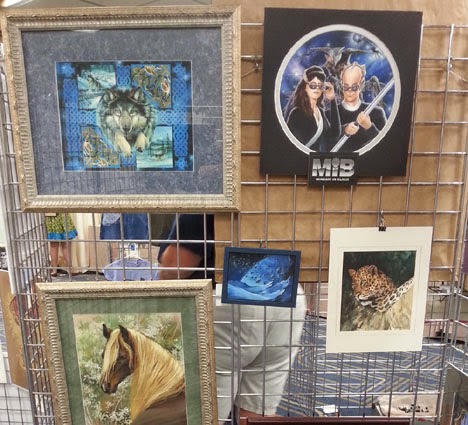 OK folks, this is one of the best ways to describe what life was like before I ever painted miniatures.

Back in the day, I used to have my art in about 50-60 different shows a year.  Most of them were sci-fi conventions, similar to the one we are at right now, which is Convergence in Minnesota.

I also had art in a Ren Faire, and at big art shows like Celtic Fest in Chicago.

The convention art shows work much differently.  I used to mail out my art to almost all the shows, especially since a number of them would be held on the same weekend!  Art show staffs are nice enough to hang mail in art, as it is called.

Wage is hard at work creating blog posts for you to look at as I gather the art for the art show... 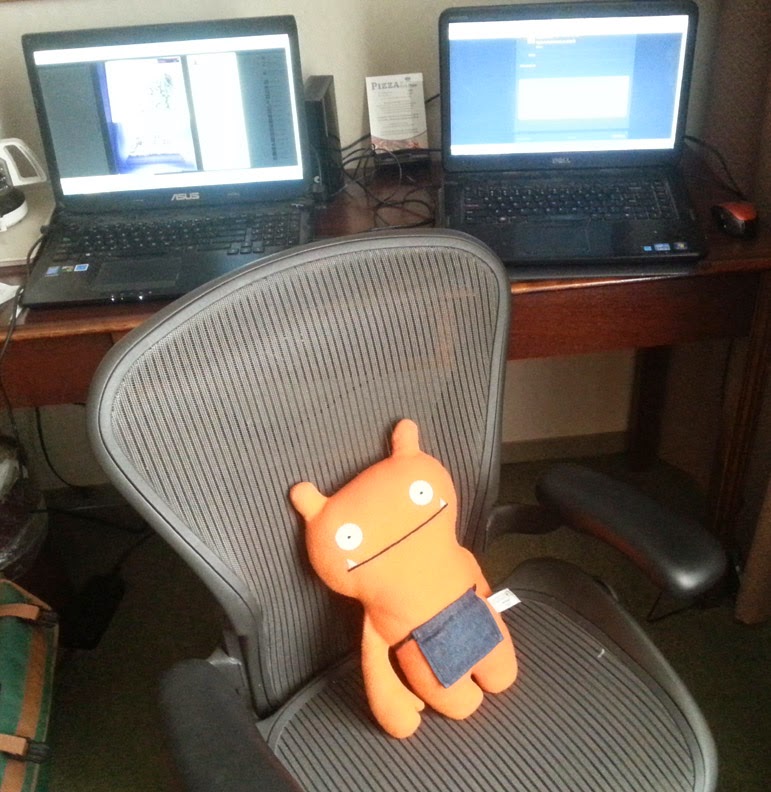 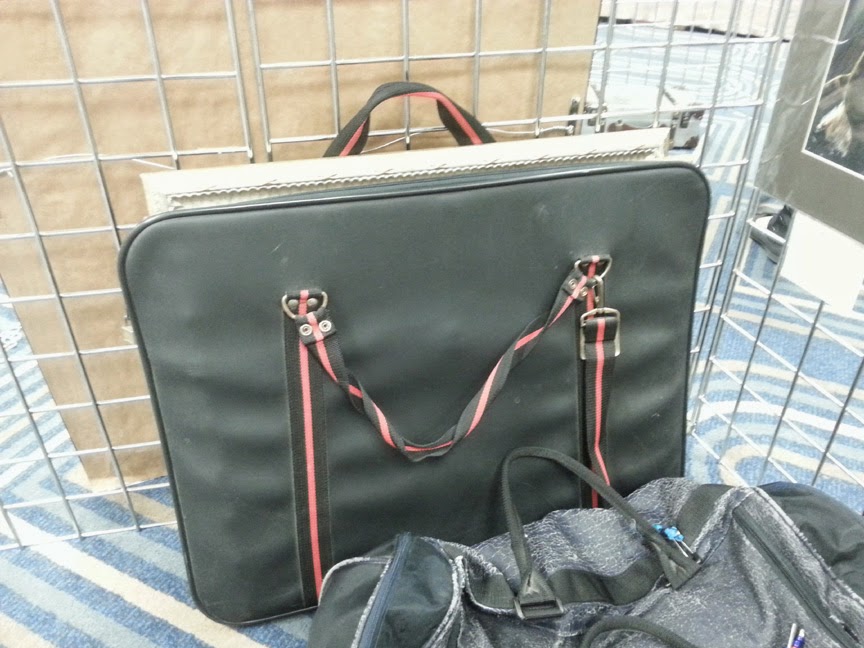 And here we go.  The Artists control sheet.  Every art show does it, but each one does it differently!  That meant learning several dozen of this kind of form. 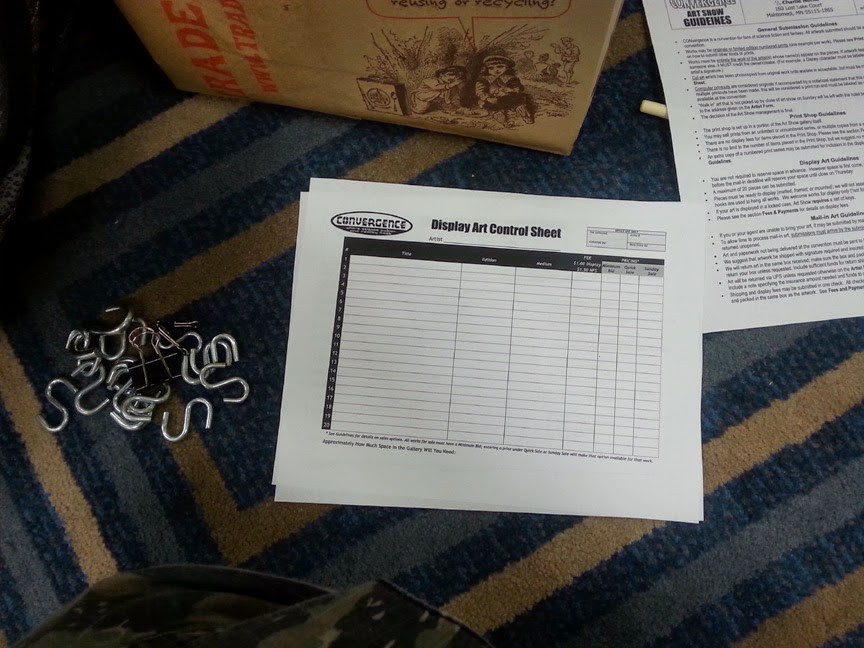 The process of hanging begins.  Since I was just bringing in anything that was at hand, the process was much simpler than it used to be.

Years ago, at the height of the art show business, I made color maps to show how to squeeze as much stuff as possible onto the panels.  However, you needed to know what kind of hanging system was used.

These types of panels can be less forgiving than the older style pegboards.

The clang of 'S' hooks bouncing down the panel, followed by choice words, are commonplace during set up time ;-) 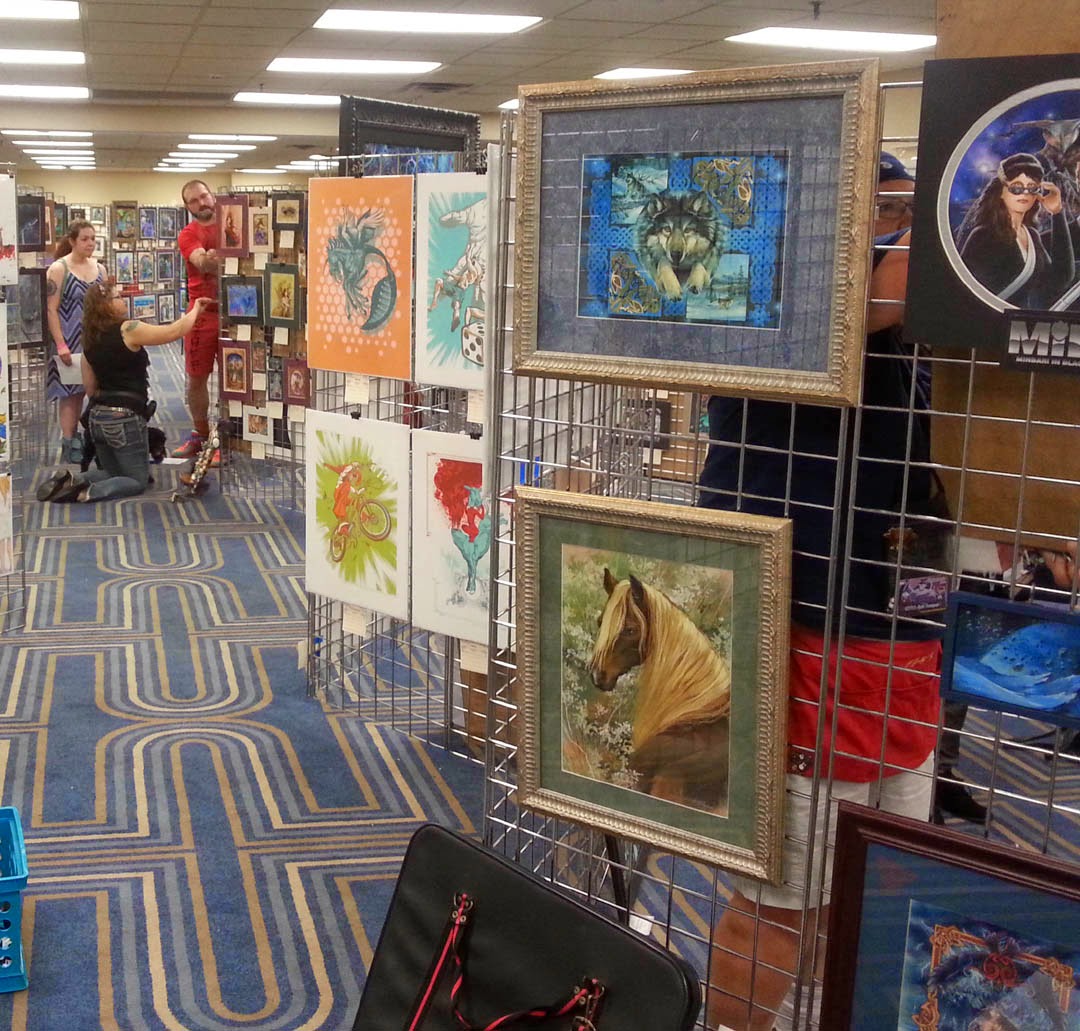 My next door neighbor, good 'ole Sandra Santara!  She's been at it for at least as long as me. 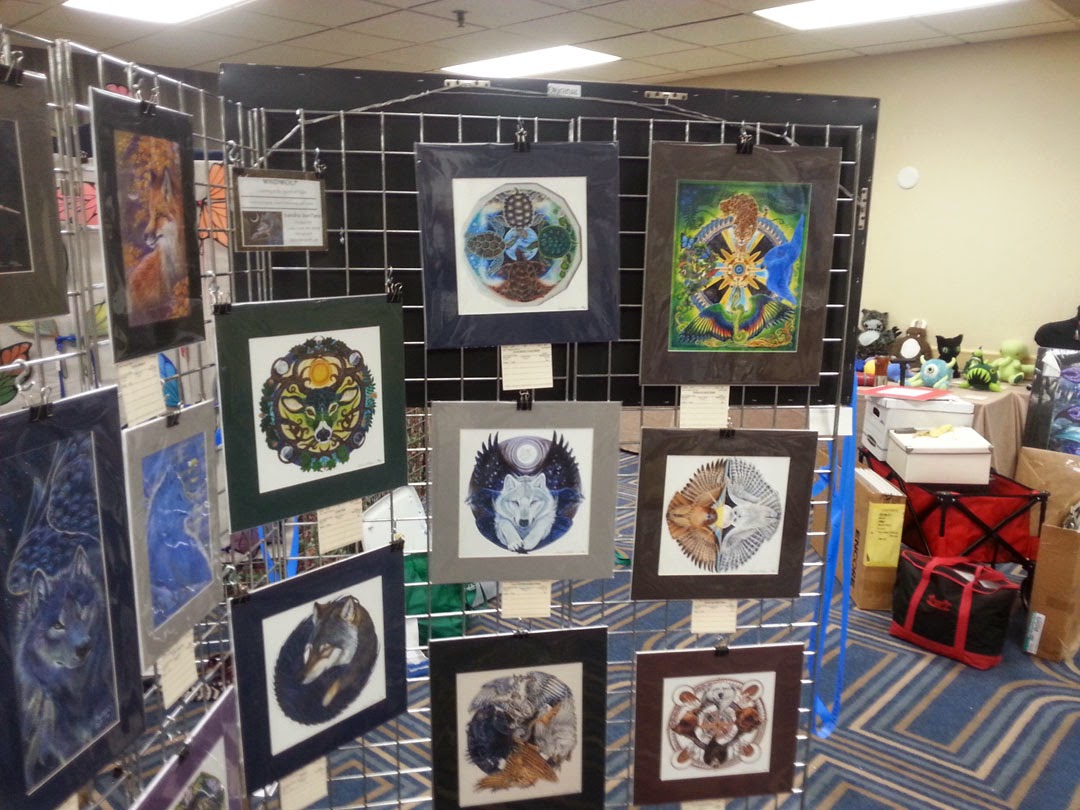 Other artists were also hard at work getting their displays set up. 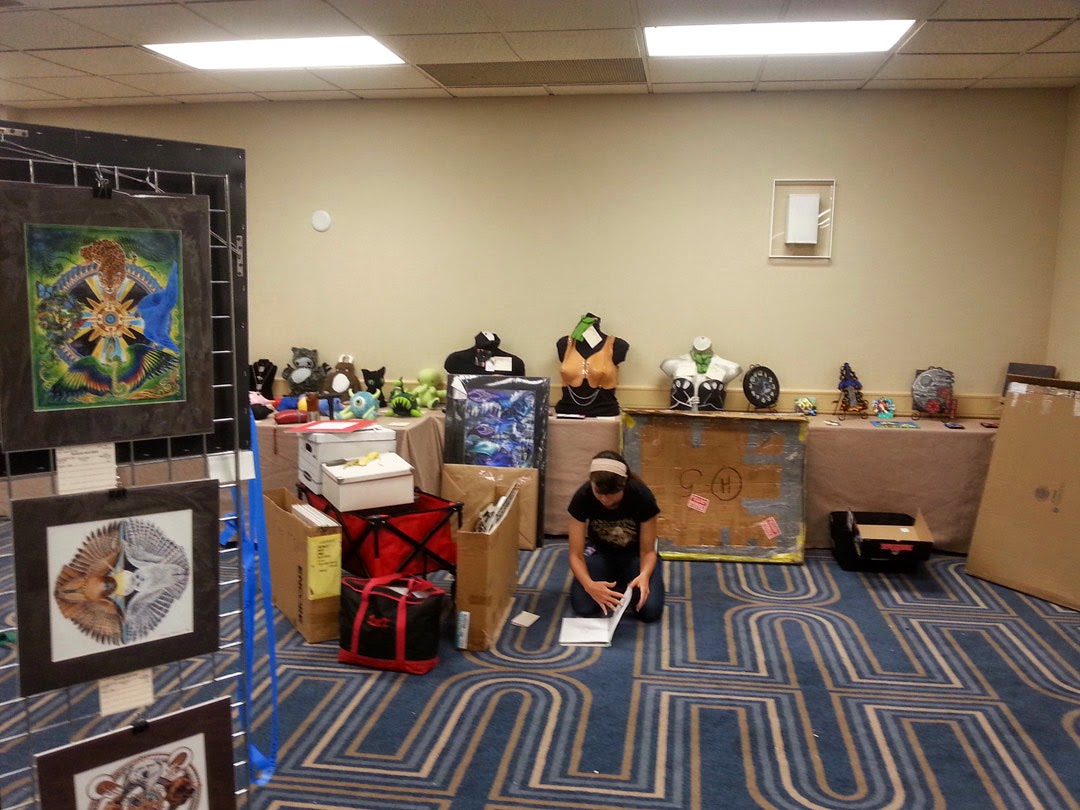 There has been such an explosion of 3D art in the last few years, they have resorted to hanging it on the panels.  The last time I was here in 2007, it was the opposite.  We were using the tables for 2D art! 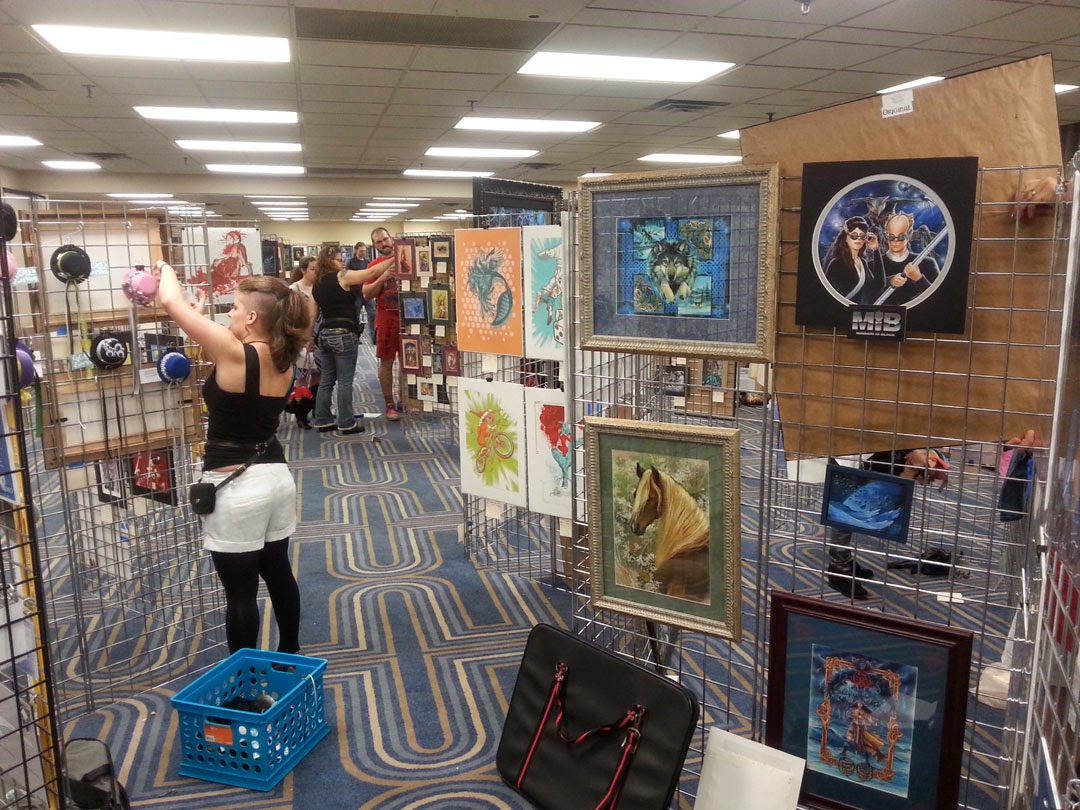 Look!  Wage is at it again!  He works really hard. 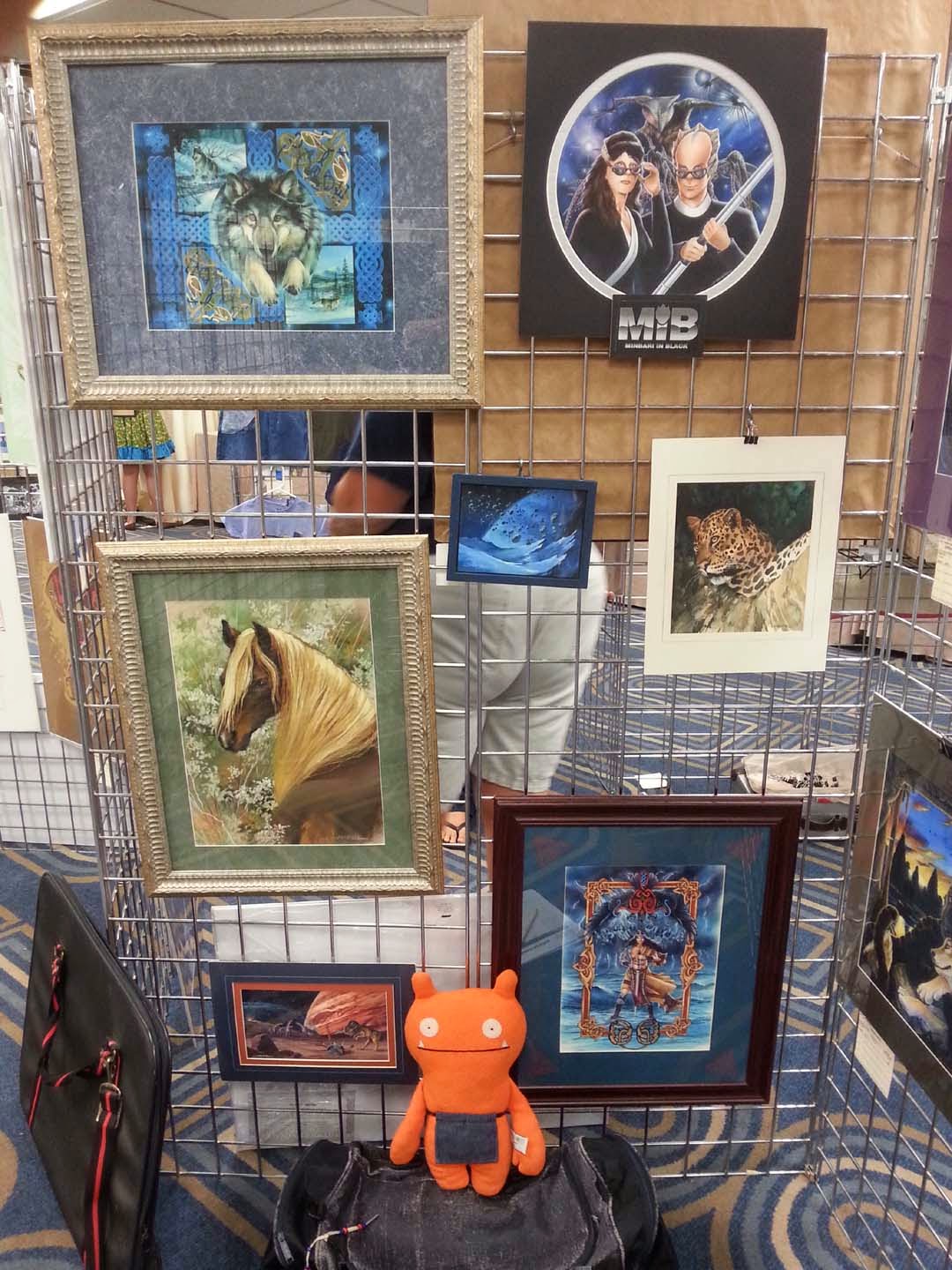 Such is the demand for 3D space, Teresa came up with the idea of getting these nice plexiglass cases that are made to be hung from this style of panels.

They work nicely for miniatures! 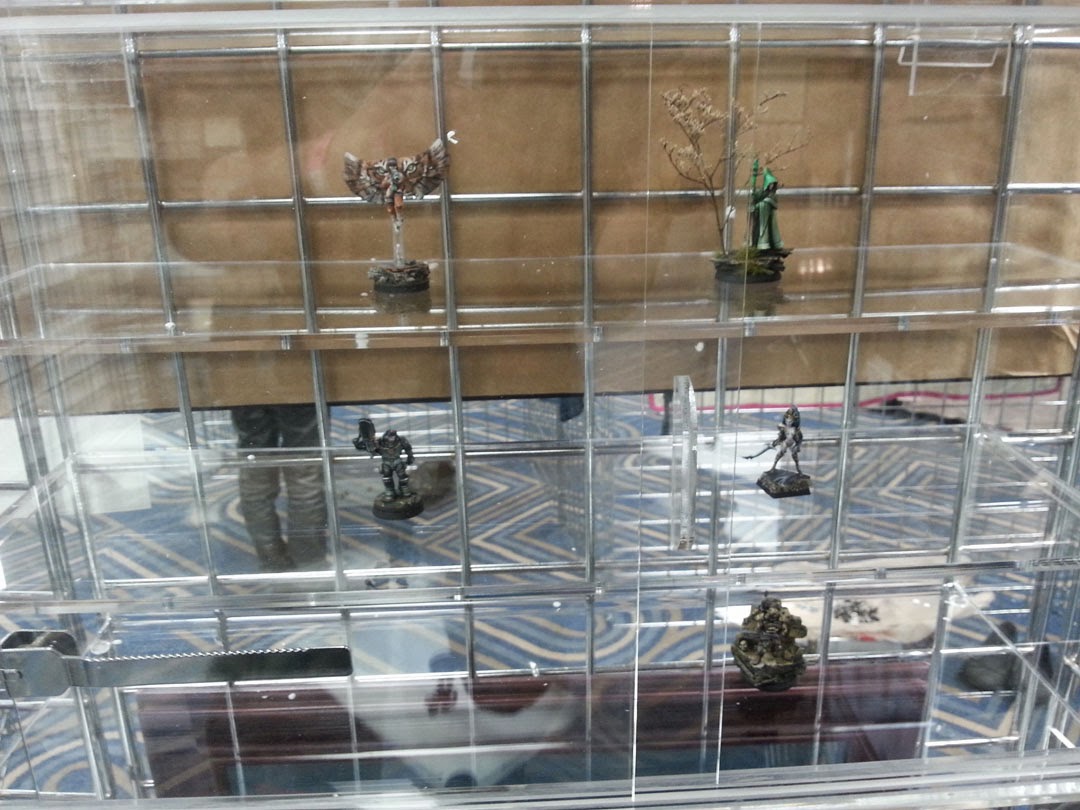 The finished set up.  The Present and the Past side by side. 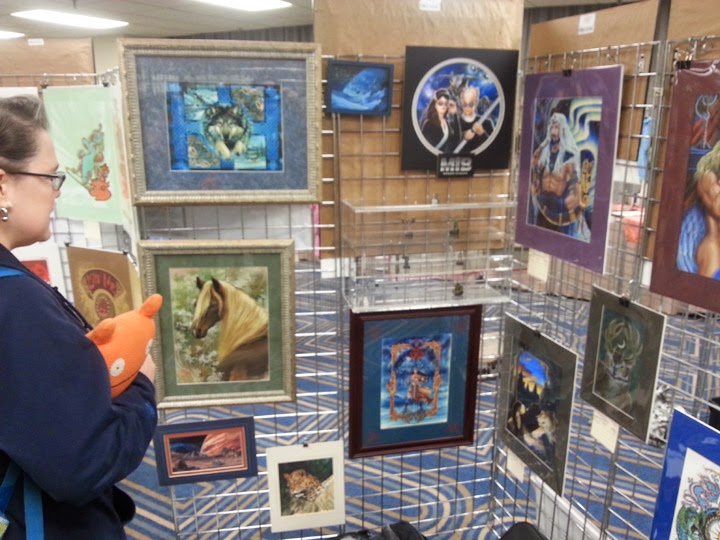 I mentioned mail in art previously.  I had the job of hanging and taking down mail in art at dozens of shows as a volunteer.  There were many times where I hung the art of Mark Roland.

In fact, it was from him that I got the idea to create "panel maps", showing where to hang each piece so that they all fit.  Right down to the bid sheets (the little pieces of paper that you see hanging from the art). 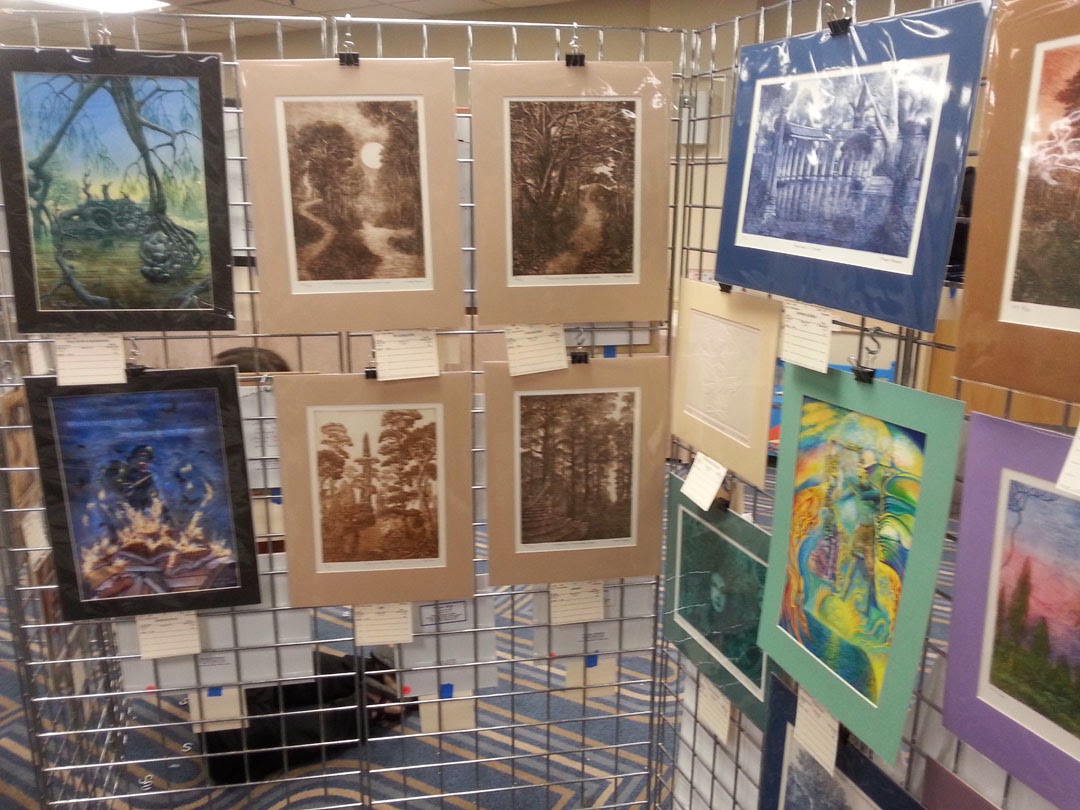 Here's another portion of the art show.

I mentioned bid sheets?  Those are another art show curiosity.

Each piece in the art show gets a small sheet that has certain info, such as artist, title, medium, price, and so on.  A little like ebay in paper form.

The art buying public (hopefully) will write their names on these sheets and place bids.  A certain number of bids on a piece means that it will go to a voice auction on Saturday night.

It falls on art show managers like Charlie to get all that paperwork straightened out, and make sure that bid sheets match control sheets, etc.  All that is data entered, and thus the auction can be set up!

This takes a lot of hard work by volunteers, who get in the art show early in the morning, and don't leave until very late at night.  Nothing happens without them.  It is very similar to being a tournament organizer.  Looking at you, Marty and Alex. :-) 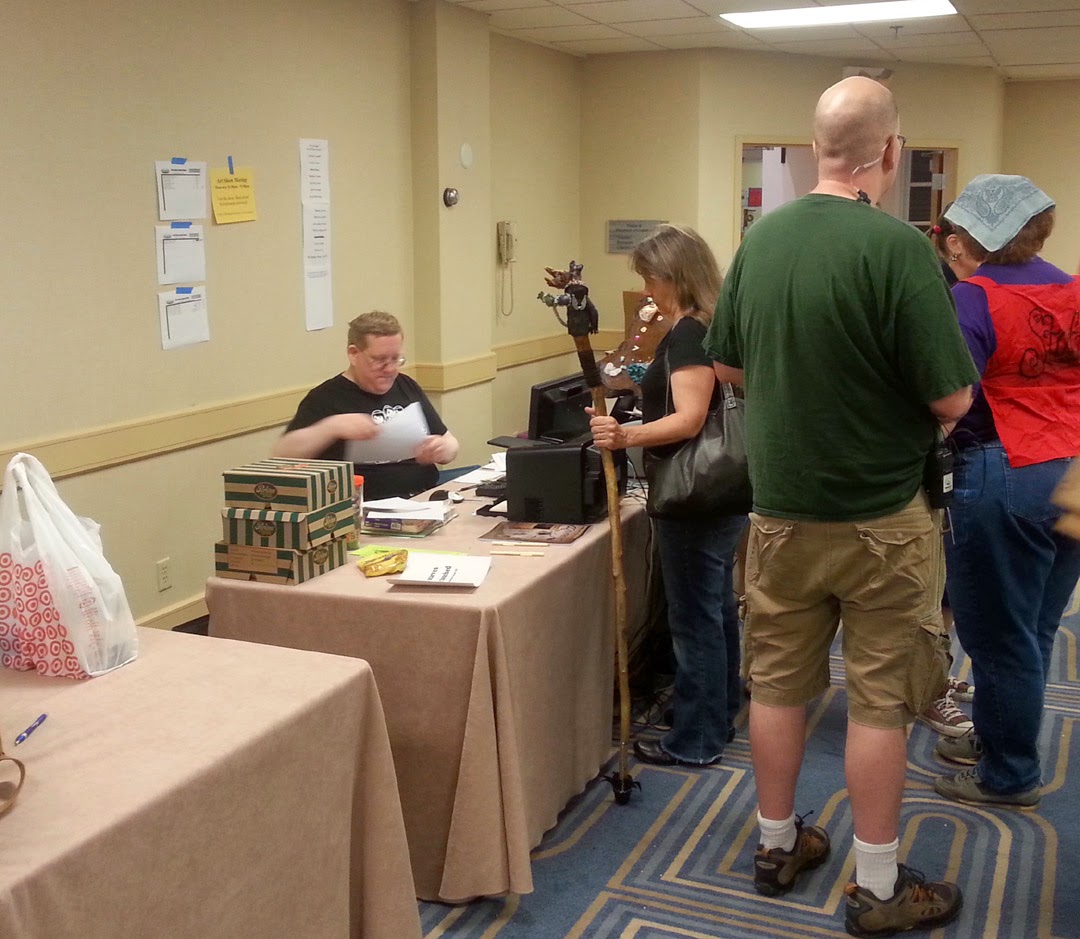 Kristine Mitzuk and Ruth Thomson ran a fun art show review late Thursday night.  Each artist in attendance got to stand in front of their panels and give some explanations on their art. 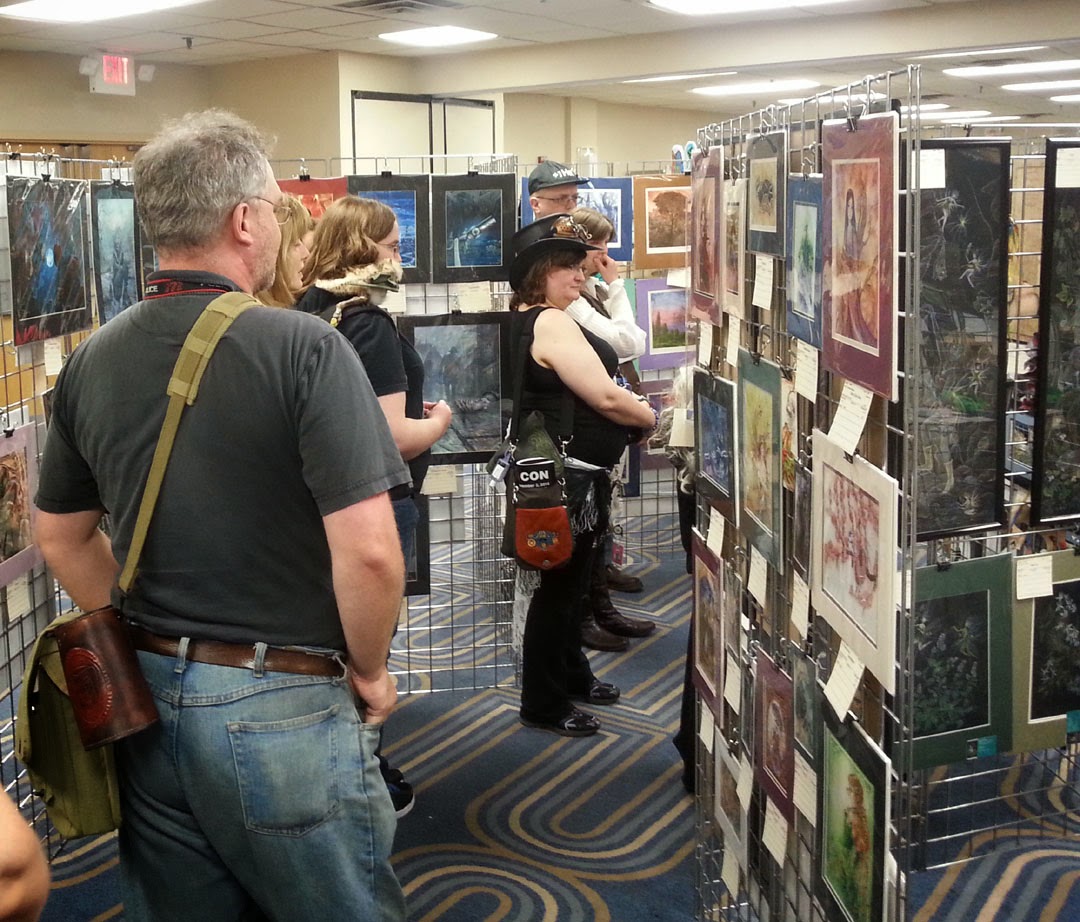 The two groups meandered around the room, running into each other now and then.

So, a big shout out to all the volunteers at Convergence, and to art show volunteers everywhere.  It is appreciated! 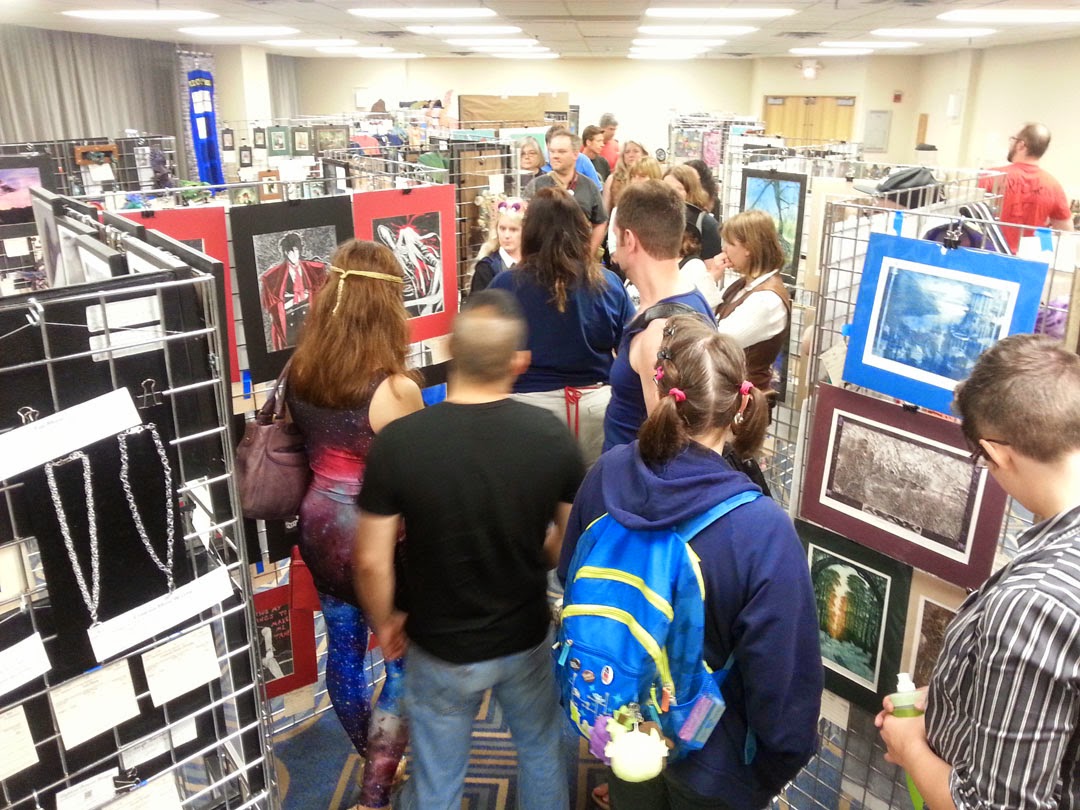