Work in Progress... the Skink Tank 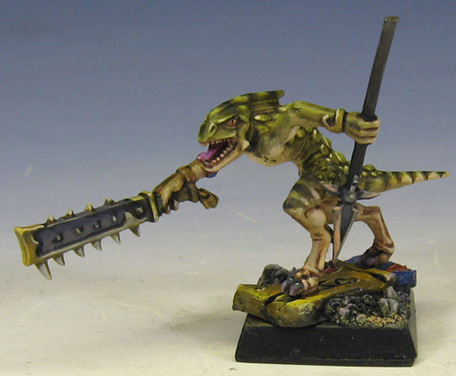 Today I finally remembered to take pictures of the big skink and kroxigor unit!  Here are a few of those WIP images... 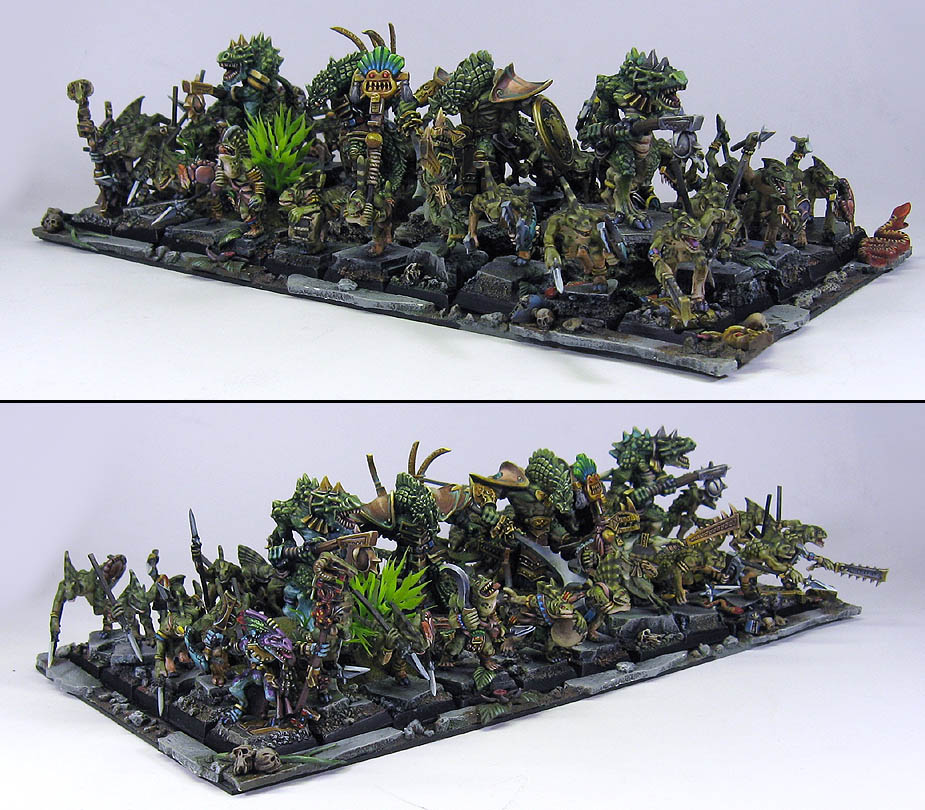 Two of the kroxigors are Reaper figures, from the Reptus faction.  Those are a nice change from the usual GW variety. 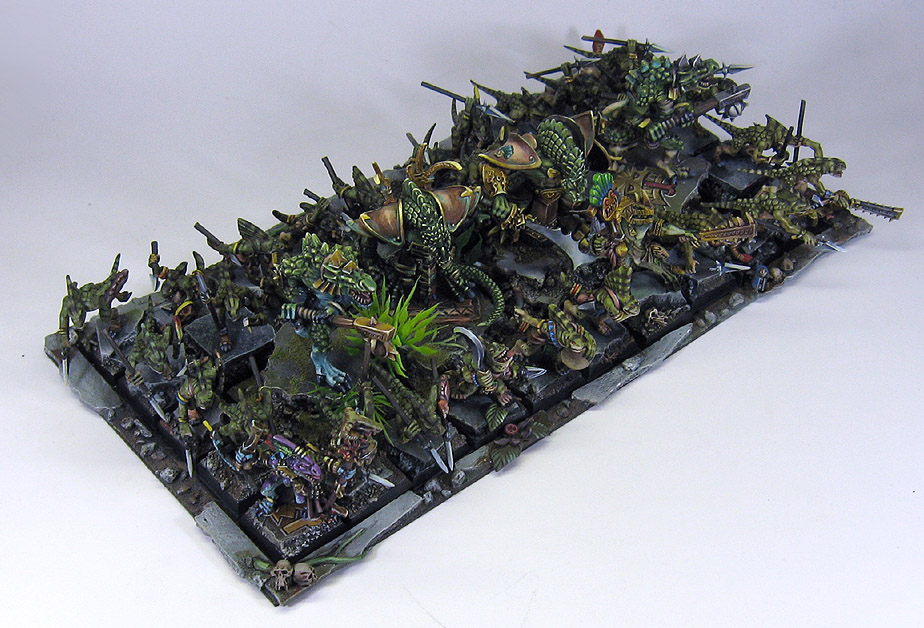 This unit has my skink surprises in side, such as the priest, and the hero with the fencer's blades! 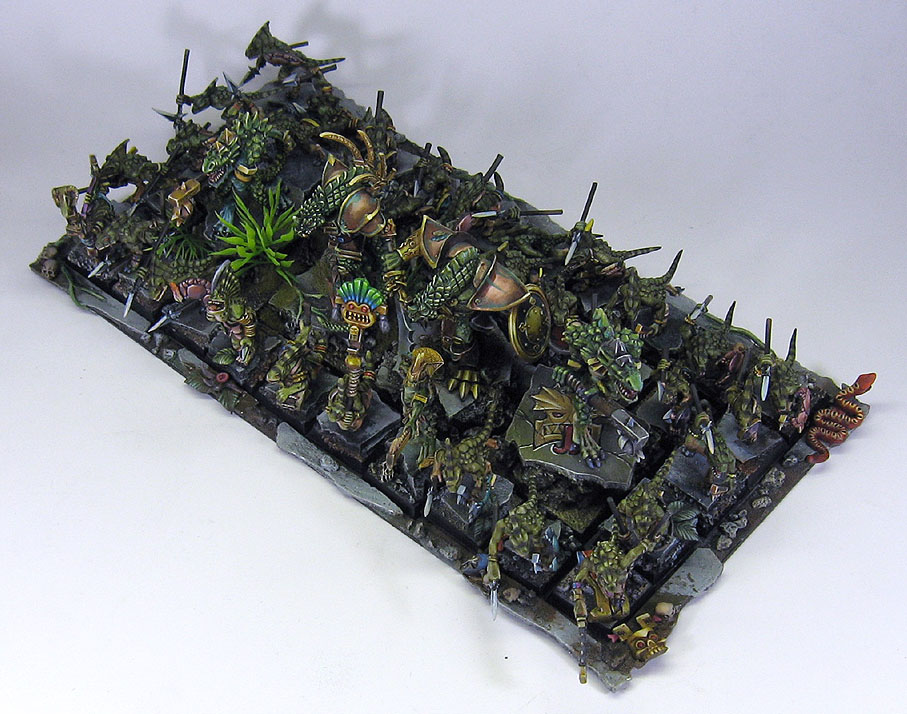 A number of the skinks are the old plastic archers.  Many of those were converted to have javelins in their hands, and shields as well.  I tended to use those in the interior, so that there was a better chance to rank them up.  Elevating the kroxigors was also very helpful.  I will be sure to include some breakout images of those as they are painted... 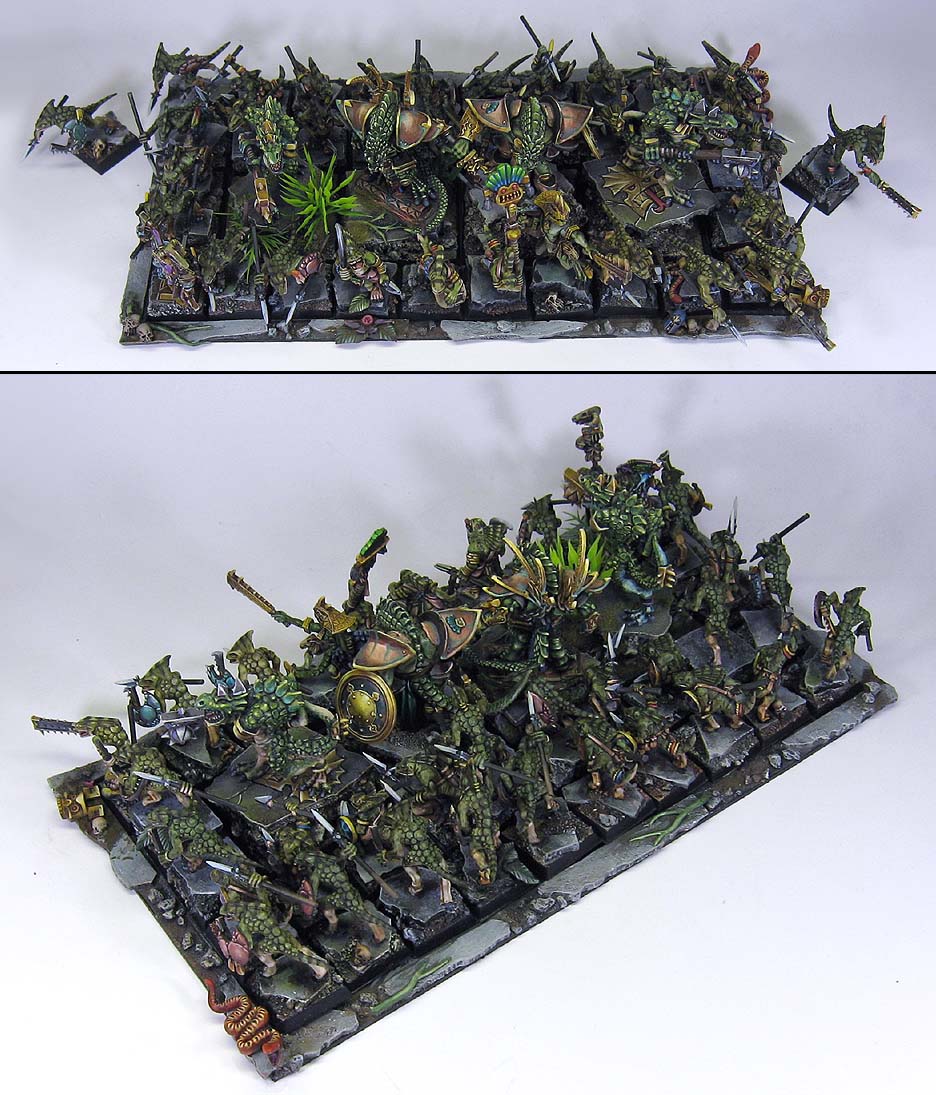 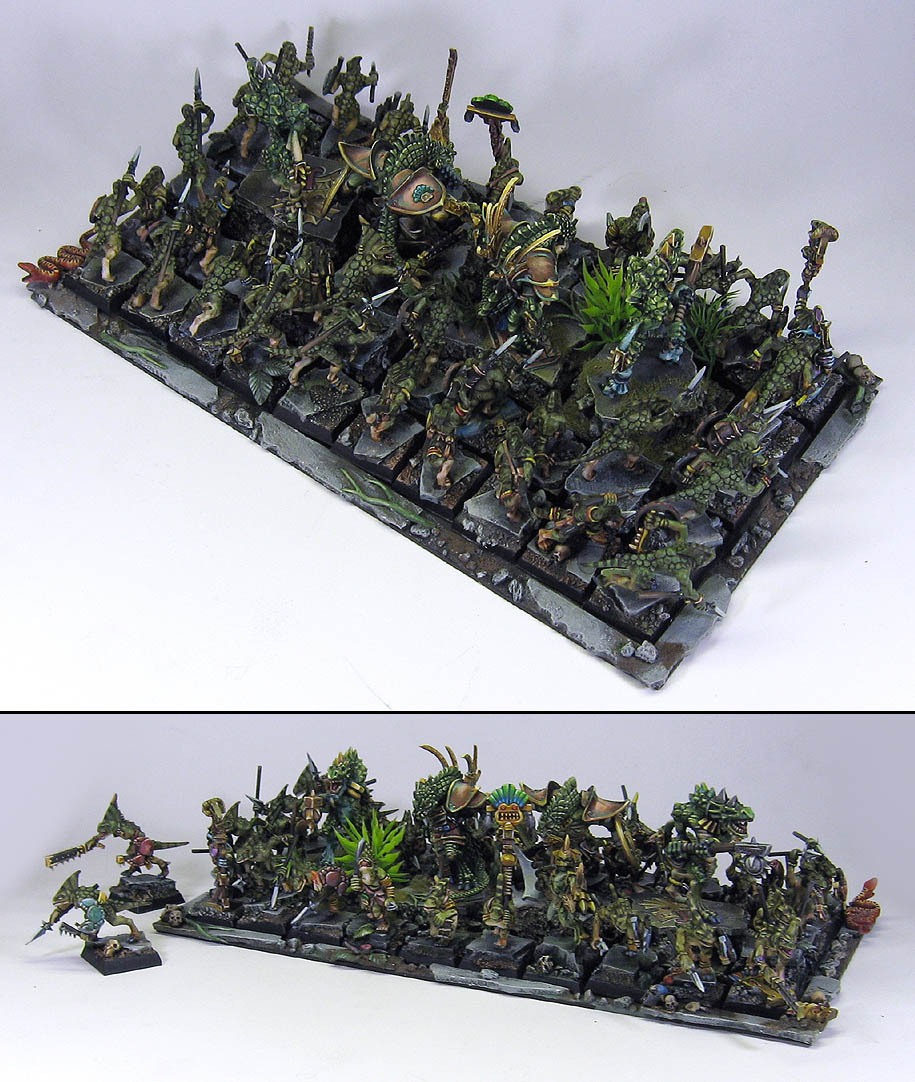 Here is a finished skink to show you what they will all eventually look like: 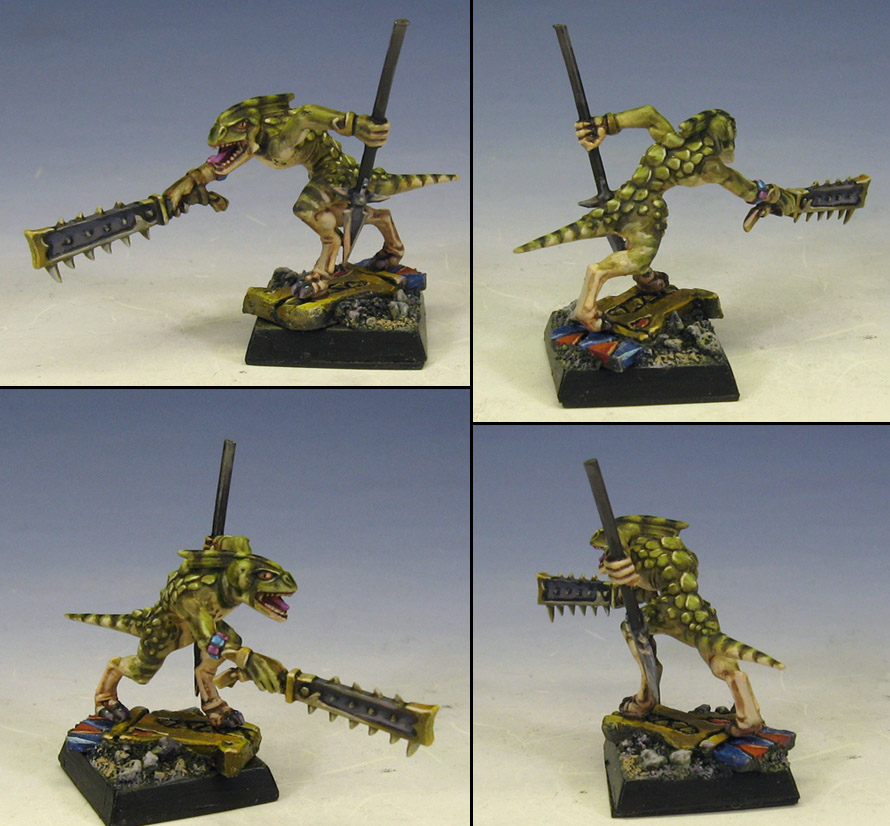 Posted by wappellious at 1:53 PM 4 comments:

So you wanna be a mini painter... 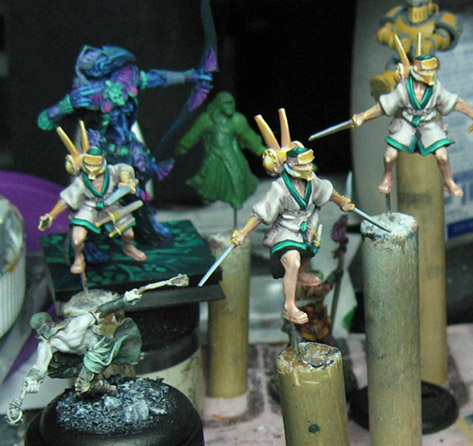 Many people ask us what it is like to be a miniature painter, as they consider doing so themselves.  We try not to discourage or dissuade them, but we also don't want to delude them into thinking that it will be a magical world where everything is fun and easy :-)  I tell them that they will be constantly working 7 days a week, with perpetual deadlines and such.  To me, just another day at the office!  It also means another day of experimentation and learning new stuff! 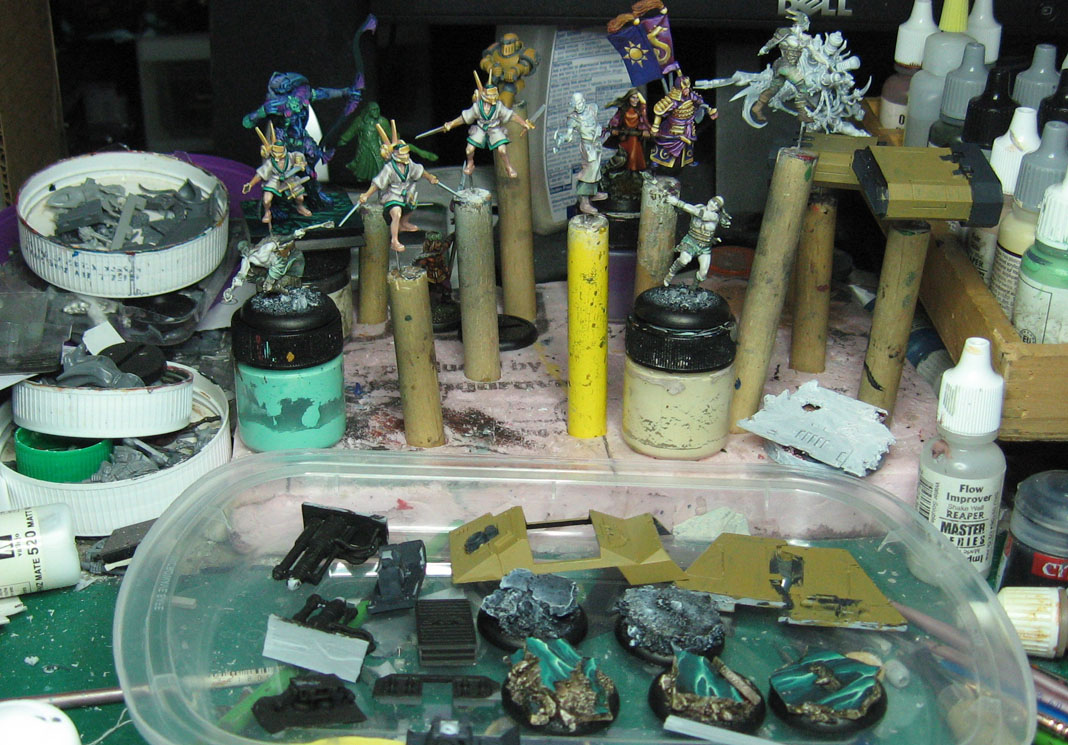 As an example, I have 3 other "staging areas" like this one set up right now.  This represents about 5% of all the things I am working on at this time.  You don't see the 2 LOTR armies, 3 40k armies, and 3 WFB armies that are all under way.  Not to mention one last Storm eagle, all manner of monsters and other creatures that are too big to show here. :-) 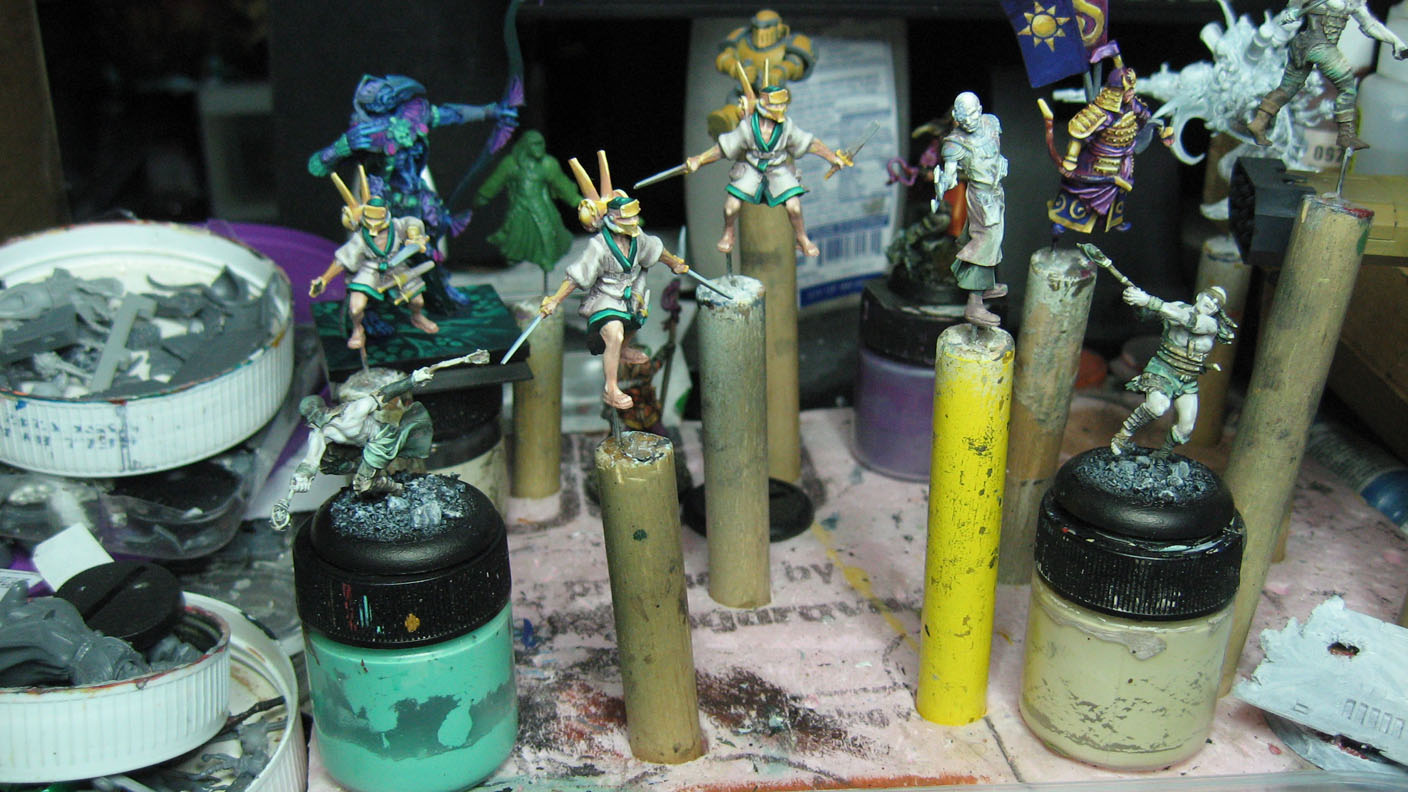 What I really looking forward to is my first foray into using pastels on my miniatures.  Think weathering powders, but in color!  In fact, some of these figures will be part of the original beta test.  My 2 LOTR armies will be the biggest laboratory to start the process.  That should give me enough data to move on to the Dark Eldar army, which is the real target for this yet to be developed technique.

People also ask me why I don't get burned out after such a punishing pace for well over a decade.  It is this kind of development that keeps things as new as when Cathy and I first painted those Lizardman figures on the kitchen table that summer of 2001!