This is MY rock!! 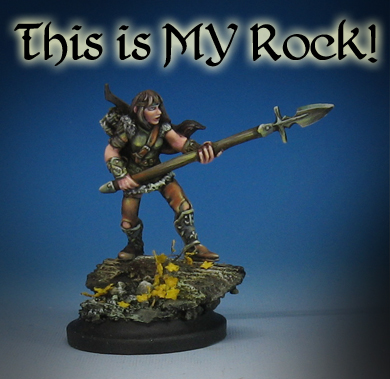 One more Reaper barbarian lady for you!

She's standing on one of the mulch bases, which is very cool :-)

A little off the top The Scalper unit of the Warrior Nation gets a new recruit!

I am still trying to decide on exactly what sort of markings and colors to put on the Scalpers.  In the story of Wild West Exodus, the Warrior Nation is a vast alliance of tribes from all across the west, so I keep thinking that some variations are called for.

I thought that I might create several different sets of markings... tattoos, warpaint, clothing and so on, which I could also reflect on the tepees which I will create for the terrain boards,

So, stay tuned for much more!!  A preview of the Dark Nation line troop sprue is coming!!