Over the river of blood and through the jungle to Babo's house we go! 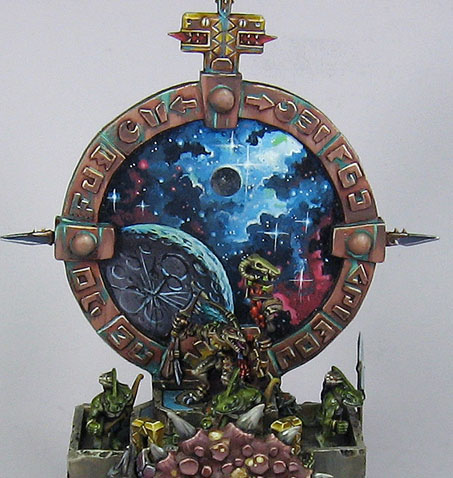 Happy Thanksgiving everyone!  What better way to celebrate than to go back to the very first Thanksgiving... when the Old Ones walked the Earth, and the child races had yet to be born...

This is one of two Engines of the Gods which I scratch sculpted, using my trusty tinfoil and apoxy sculpt method.  The howdah was made mostly from sculpey.  If you do a search (brand new gadget!) for Lizardmen or Engines of the Gods, the work in progress images should appear in an earlier post. 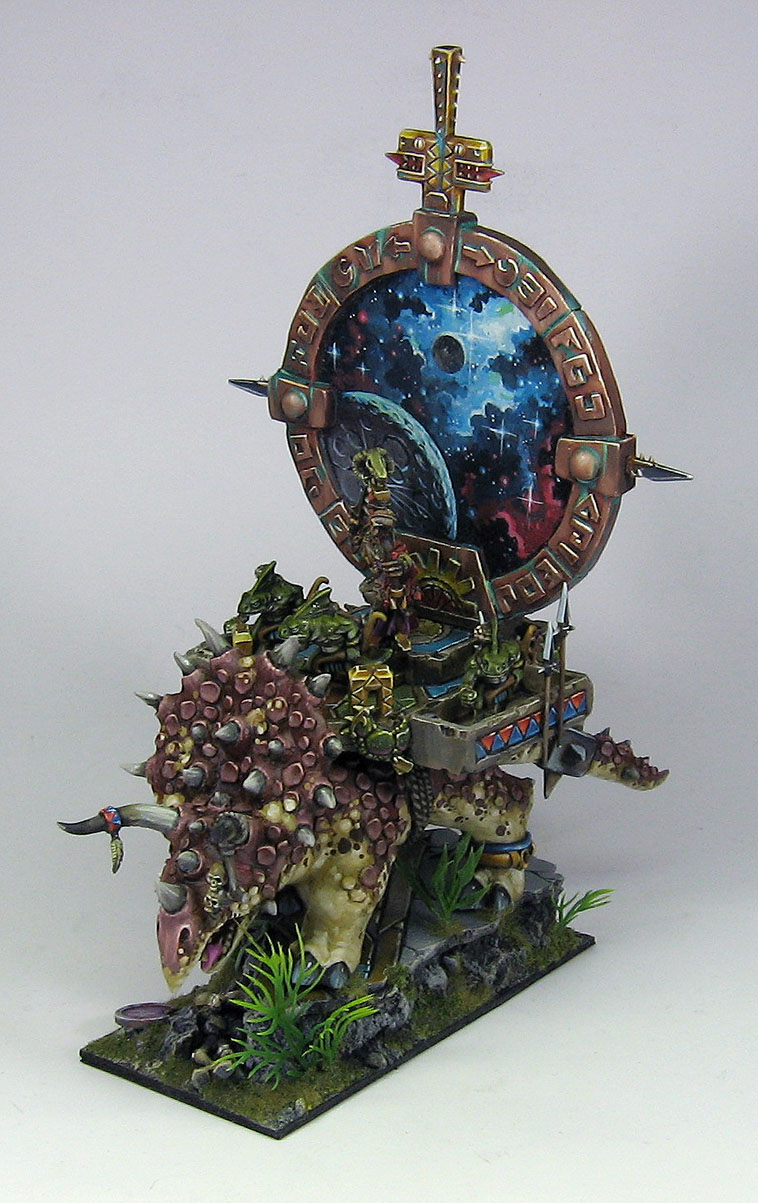 As I love painting spacescapes, I could not resist the temptation to paint a tiny one on the portal!  It was a blast.  The skink priest can actually be removed if you need him on foot in a regular unit.  Or, if you are me, when he is shot off the howdah on the first turn!  Therefore, the portal can be taken off as well. 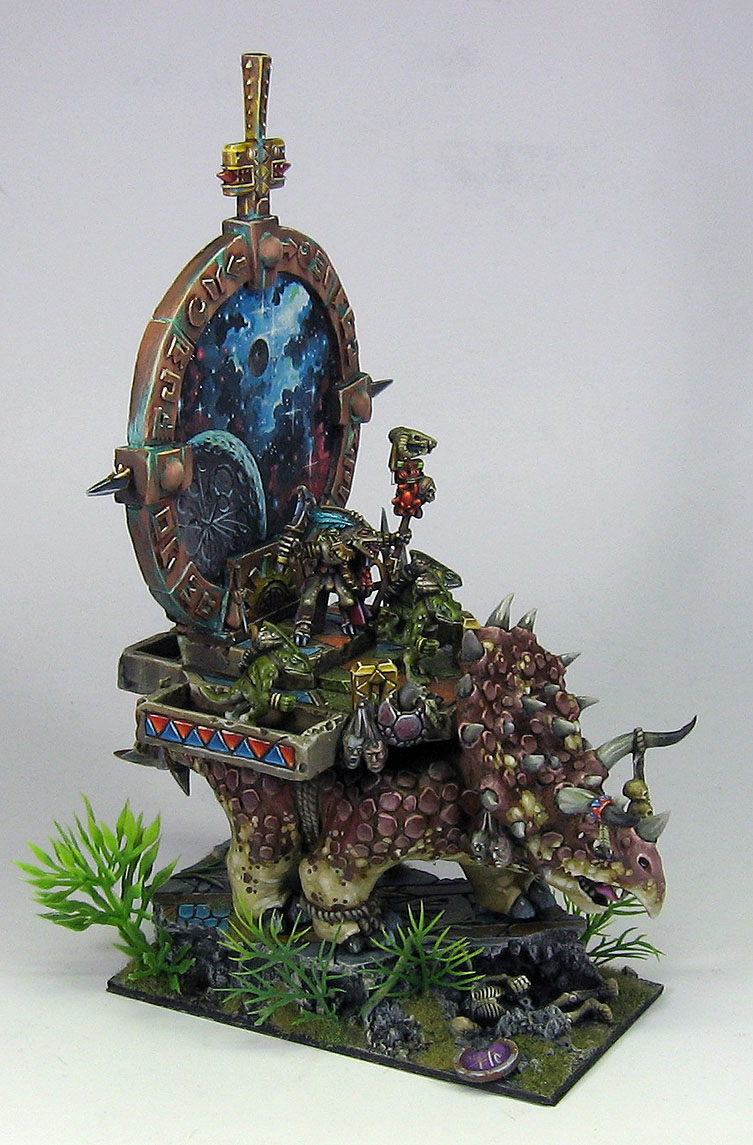 This view really shows that spacescape, which was a painting I did many years ago called Chaos and Creation. 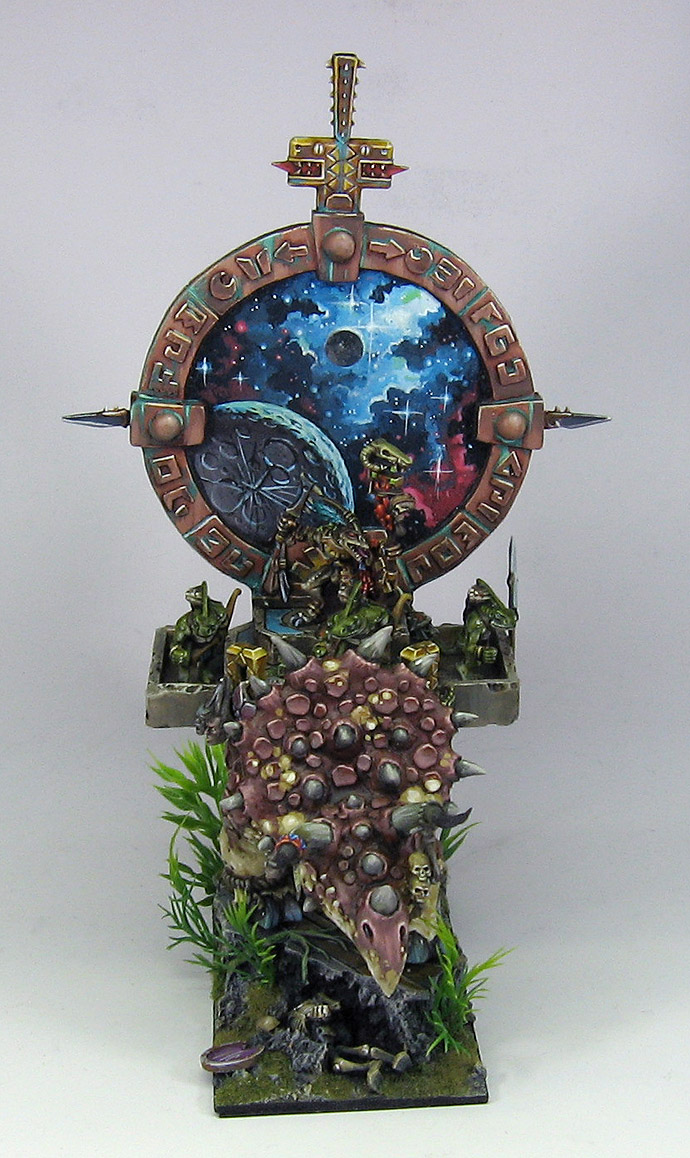 I had a lot of fun sculpting the stegadons.  I loved making the scales and the horns... adding the extra bits, etc. 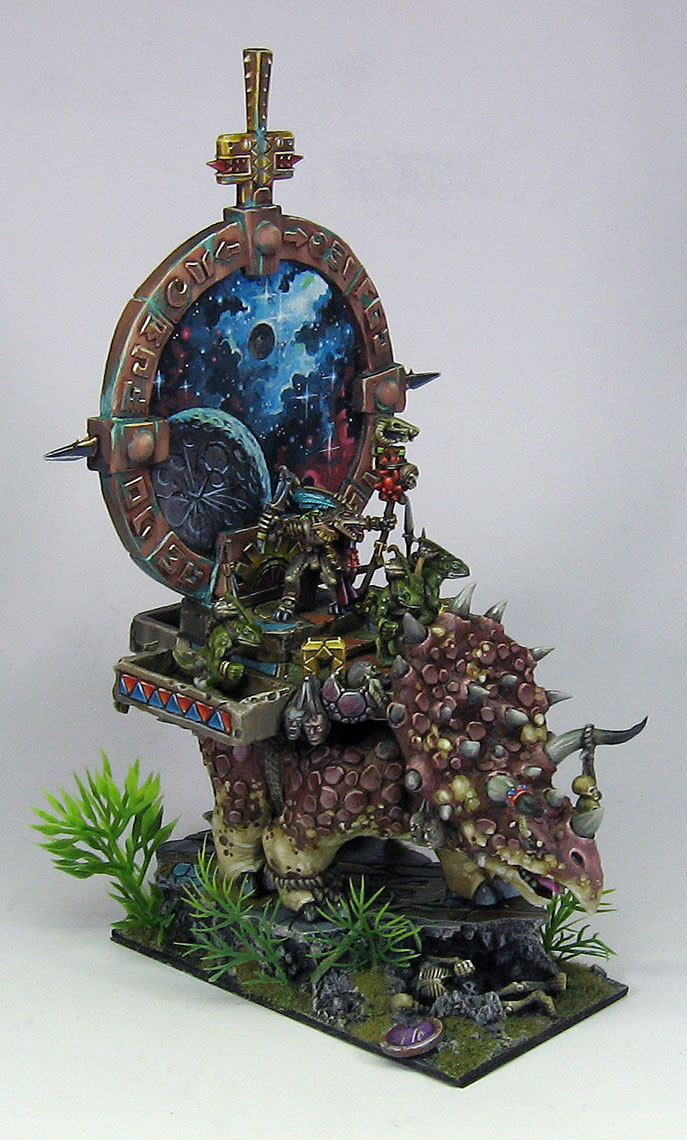 Here are some views of the back, showing the terradon nesting grounds. 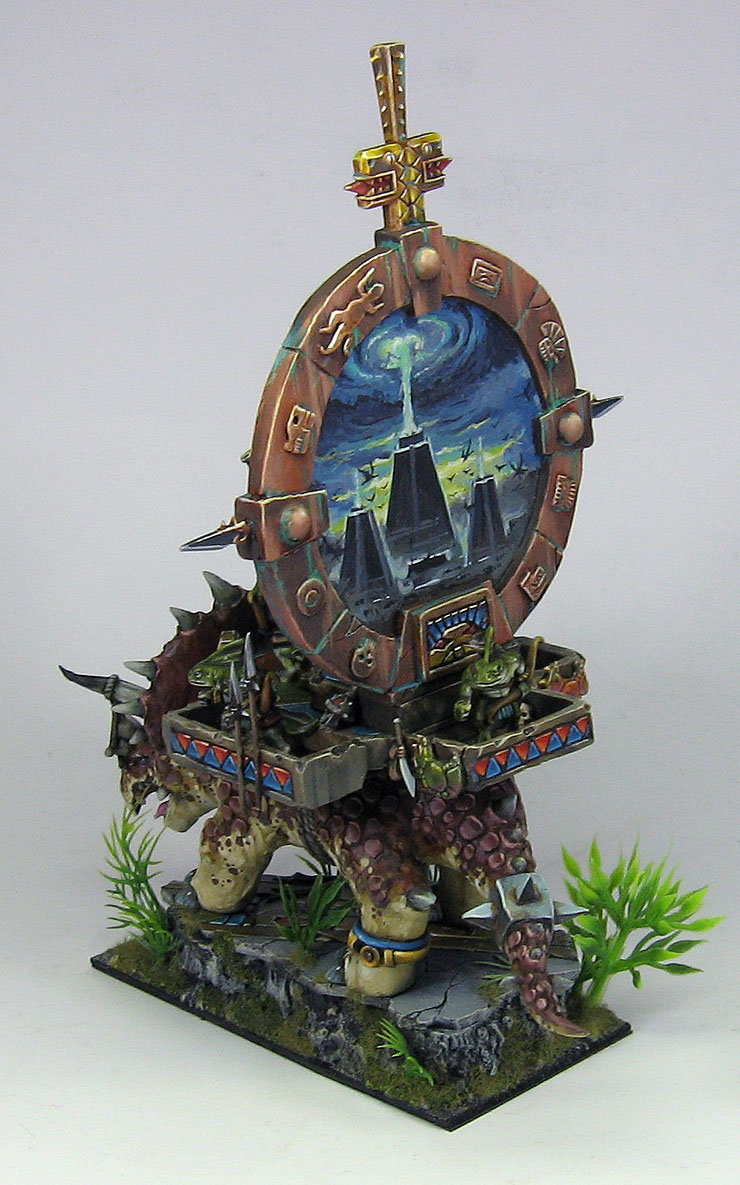 My army was comprised of skinks, terradons, salamanders, and these Engines of the gods.  Before 8th edition came along, I did not even have a Slann Mage Priest. 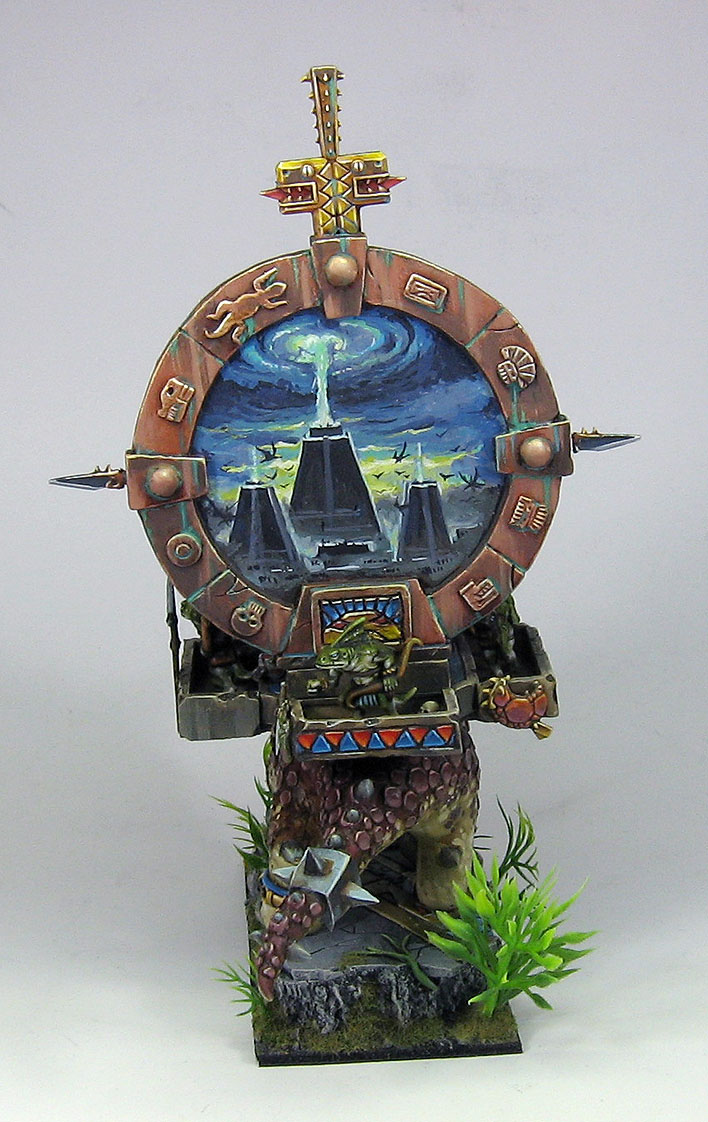 I used some old edition skink archers to fill out the crew. 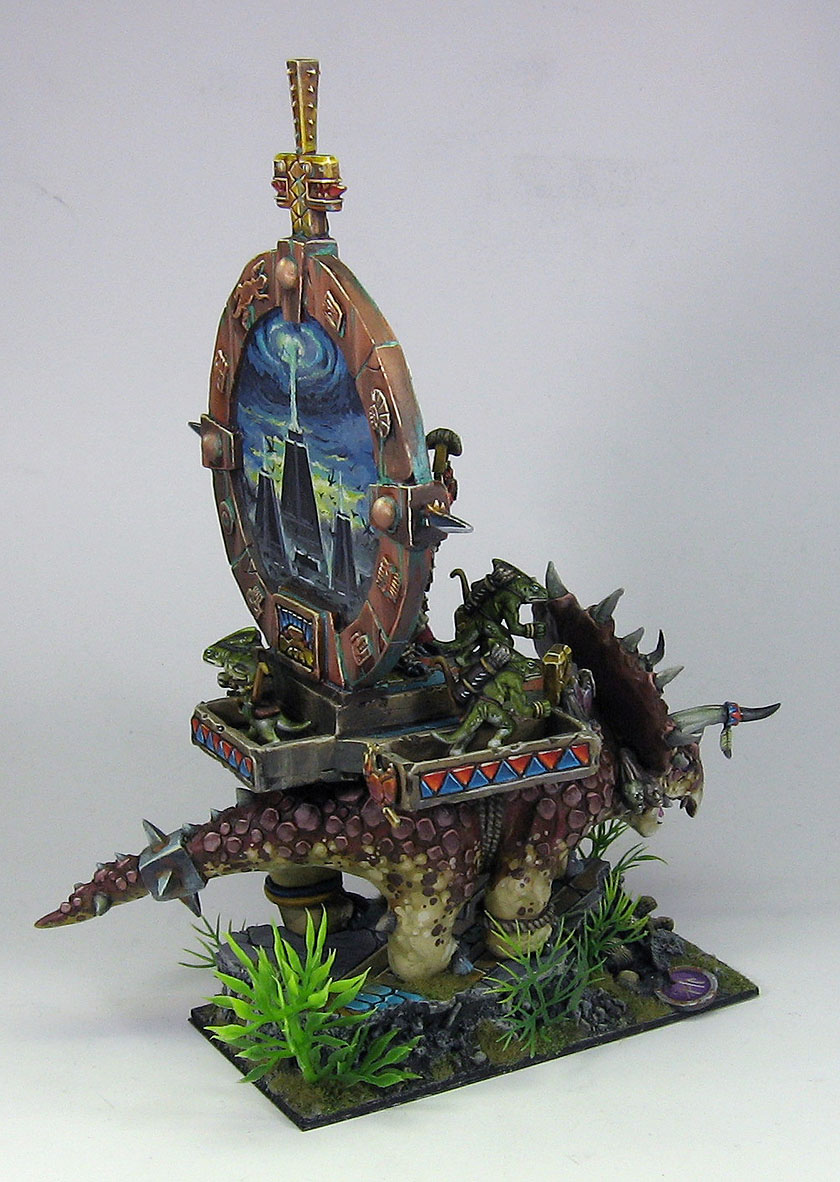 The base was designed to match the rest of the army, as well as the Temple of Blood display board.  If you are new to the blog, and are not familiar with the Temple of Blood and the Legend of Stikki Wikkitt, I suggest you do a search on that as well. :-) 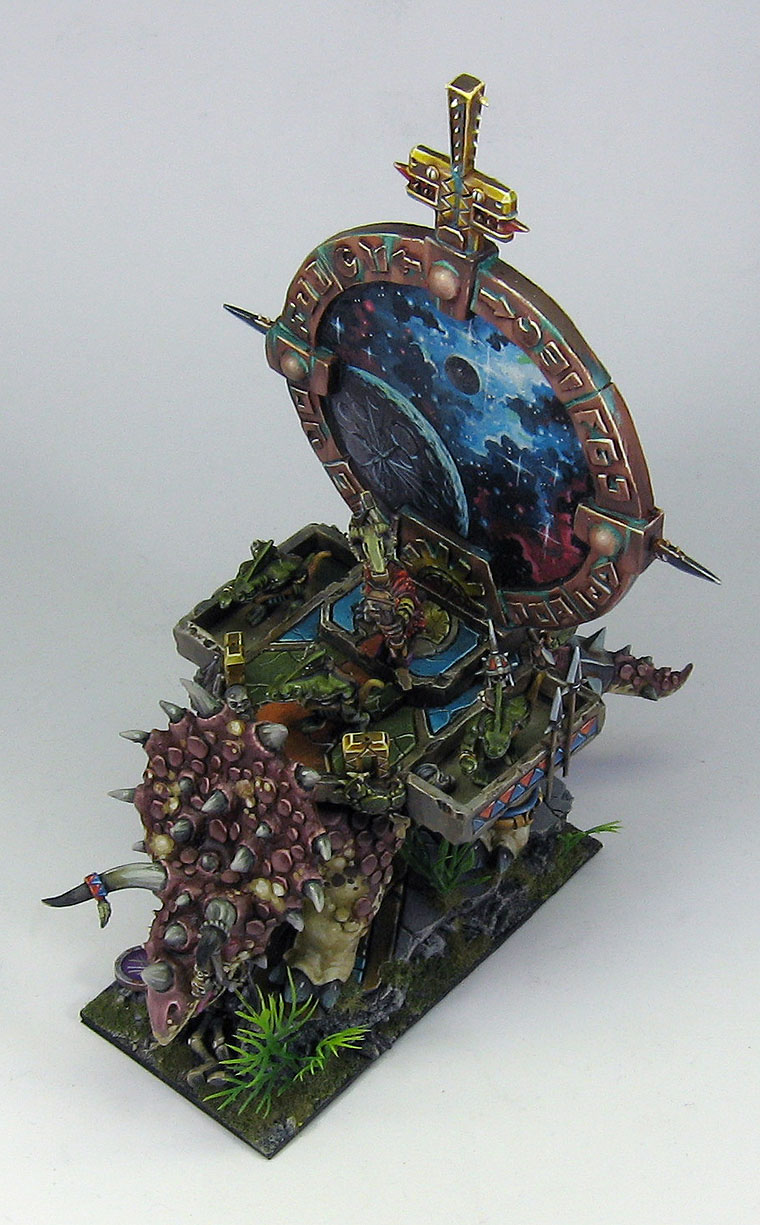 There was quite the story behind the army.  It lead the way for the Tainted Pharaoh and his legions.  Many games were played with this army, including a very fun four part campaign against the forces of Chaos... who else? 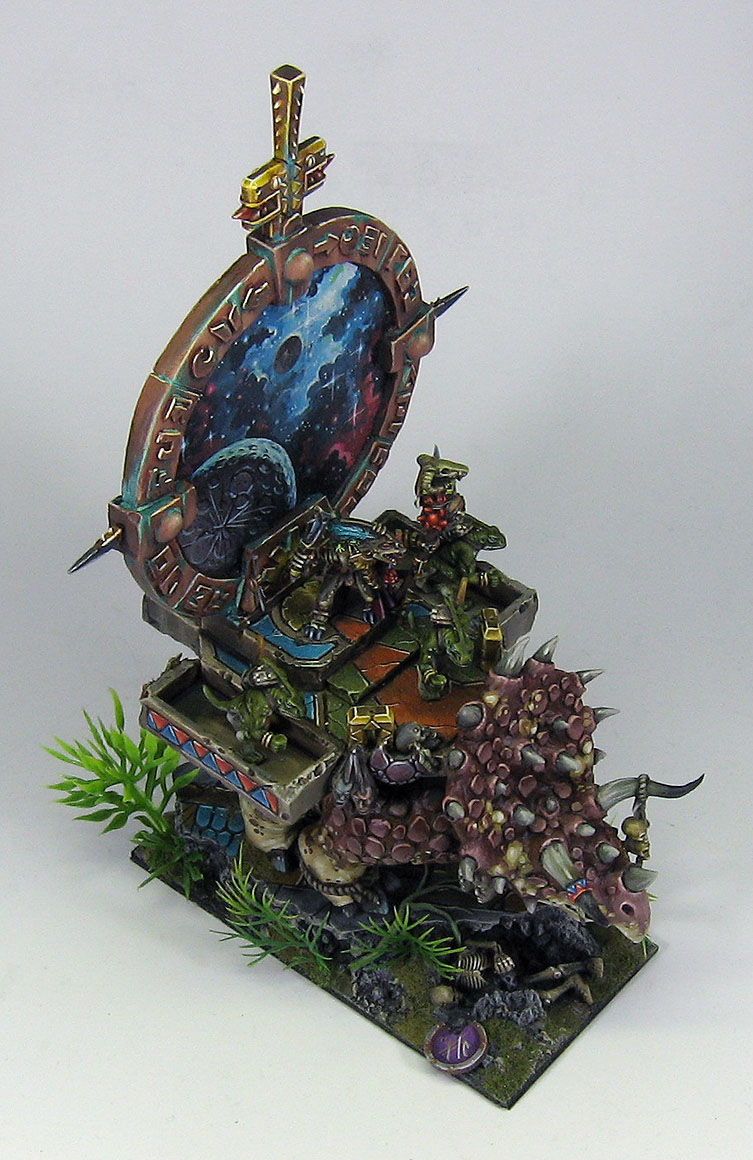 This could also double as an ancient stagedon, with giant blowpipes (you can see the stanchions for them towards the front of the howdah).  I had a skink chief that could also ride on this monster.  I don't think I ever played a game with that setup, however... 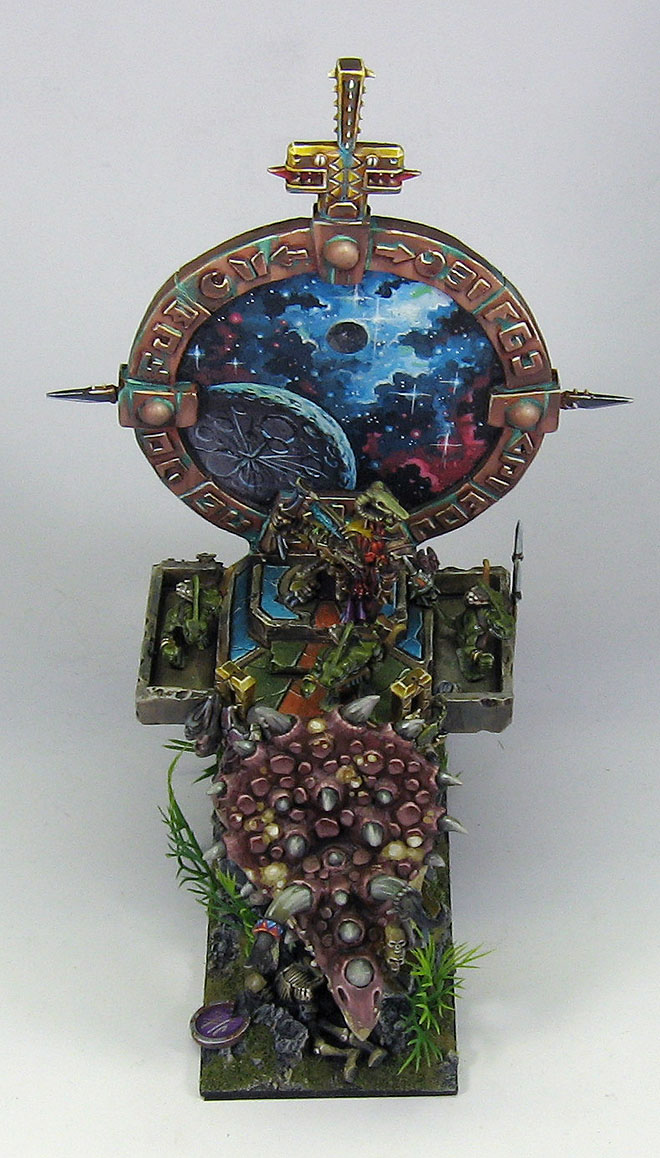 I will post some images of the other Engine of the Gods later tonight, so stay tuned!!!!! 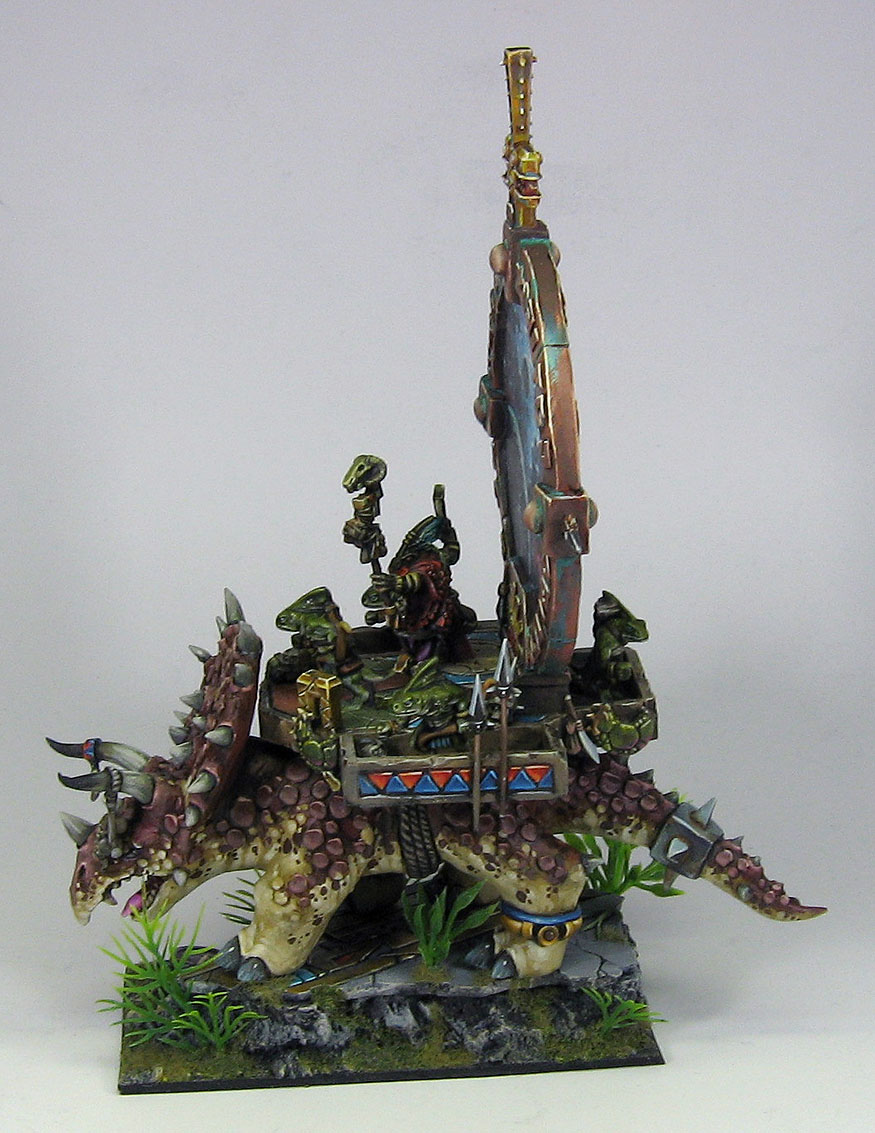 Yes, it is Thanksgiving, and that means it's time for Cathy's Cranberry Sauce!!!!! Yummy. :-) 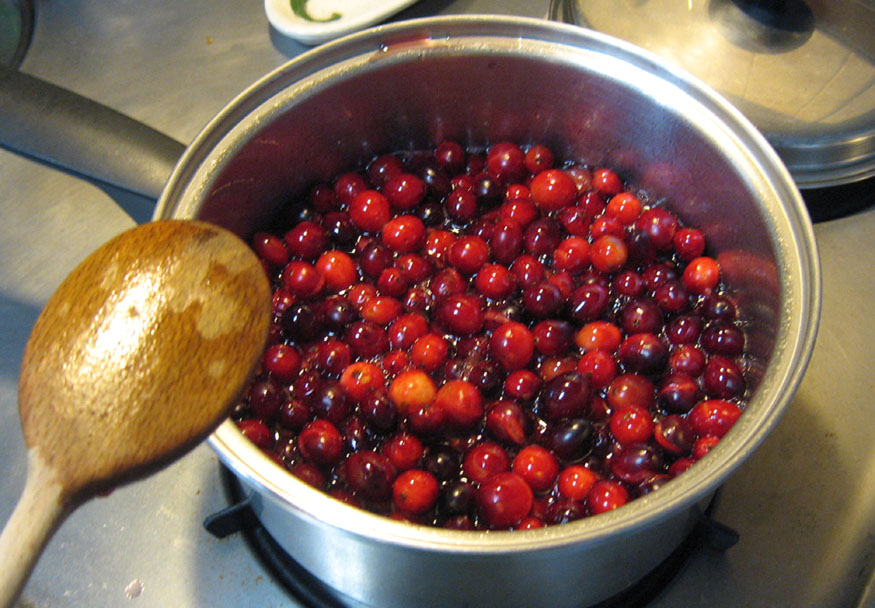 More Angron management... the rest of the shaded basecoat 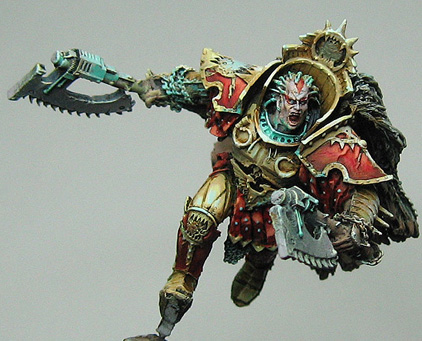 All right folks!  Time to finish off the last of this shaded basecoat stuff, and get set for glazing and tinting this piece.

You can see that I did some more work on the chain axe since the last post, as well as the face.  Precise colors are not important right now, since the idea is to tint it during the shading process.  This allows us to make adjustments on the fly.  This is very handy when you are trying to match colors from something you may have painted a long, long  time ago! :-) 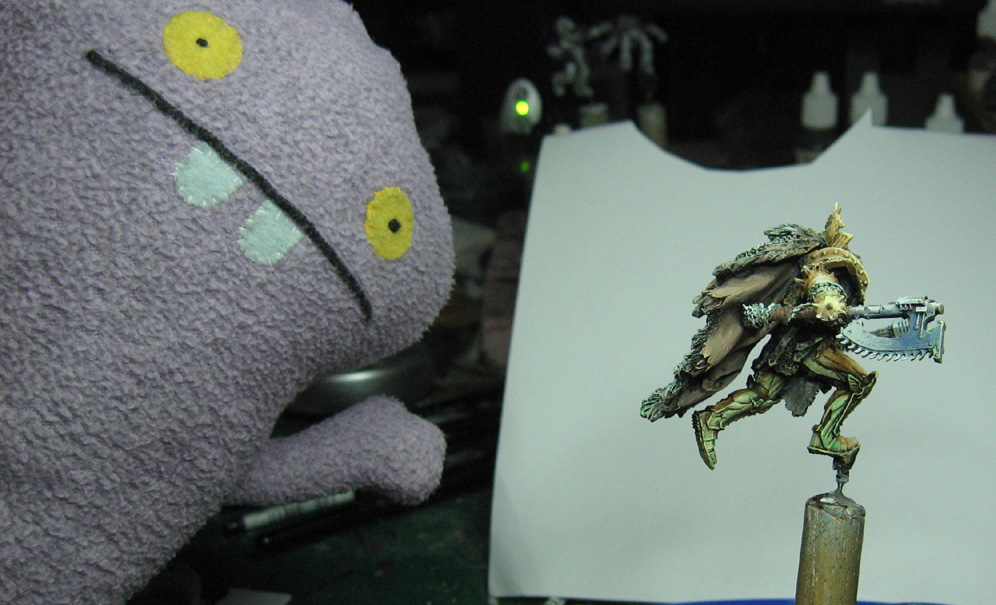 After all the golds and other metal surfaces are complete, we can get into a nice red accent color! 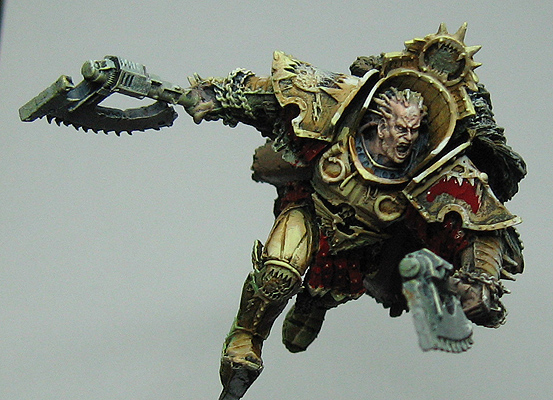 I mixed the red with a bit of grey to cool it down as it was darkened.

The lighter reds are created by mixing in some vomit brown.  This is a good way to get the reds lighter without becoming pink.

As I work on those reds, I also think about some OSL, as in some glowing conduits on the back of the head and under the chin.

More lightening on the reds...

And for those of you wondering about the rest of the set, here are some images of those other pieces... 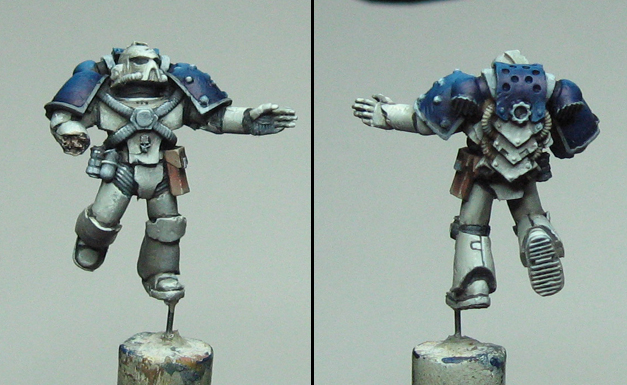 Just as with Angron, the whole point of what I have done thus far is to make these ready for that dramatic glazing/tinting shading process.

I will post the images of that process after the holiday tomorrow! 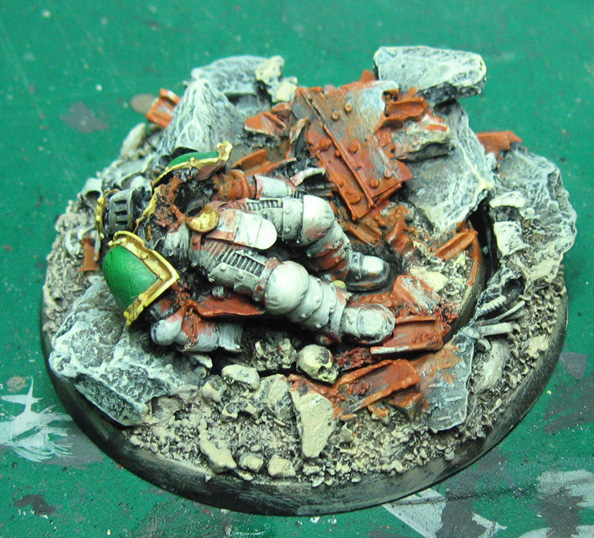 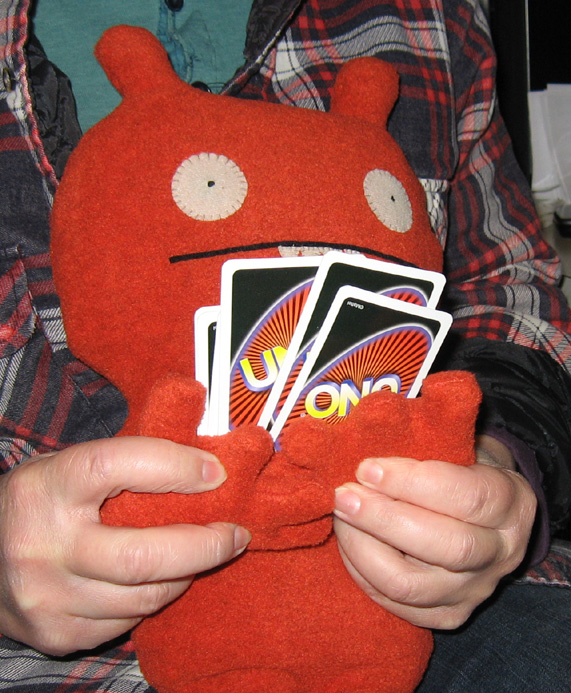