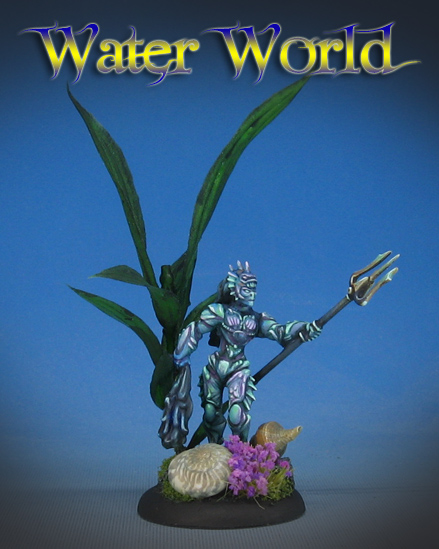 I conducted a number of experiments on these Naiad figures from Mantic Games.  First, I wanted to see what my collection of sea shells might look like on the bases, while I also tried out some new aquarium foliage and even colorful tufts from Green Stuff World.

I ended up having to do the usual modification of the aquarium plants, and that was to do a wash of a greenish mix of Vallejo washes and Reaper Liner paints.  Those dry extremely matte or flat, which kills the shiny texture of the plastic leaves.  They are also very durable and get down into the crevices, which means that they won't flake off when the leaves move or get bent.

As for the seashells, I had to put a similar glaze over the top of them to make them match the rest of the colors.  They were far too bright and stark otherwise.  It was a much lighter version of the plant wash, since I still wanted to keep the natural patterns on the shells!

Finally, I used a few of the new Green Stuff World grass tufts, which were just the trick to match some of the Reaper Clear Magenta colors and the other high saturation Clear paints.